A focus on craft and making provides this radically reconfigured apartment with a sense of warmth and tactile materiality, enhancing its stunning views.

The apartment’s floor plan underwent “radical surgery” to make the most of the views.

City apartments and coastal houses satisfy different needs in different locations, and it can be a pleasure to move freely between the two, and an equal pleasure for the architect engaged to design for the different settings. As the third architectural project undertaken on their client’s behalf by John Wardle Architects, Freshwater Apartment at Melbourne’s Southbank complements a beach house on the Great Ocean Road and an office fitout in a historical bluestone building in the Melbourne CBD.

The design strategies in each location naturally differ, despite having occupants in common. The beach house, located in Fairhaven, is a geometrically complex dwelling of generous proportions, lined in glowing timber, which positions the client family close to the surf and surfing that is a shared passion. This connection to water is a theme that unites both dwellings: in the case of Freshwater Apartment, it takes the form of a panoramic and somewhat vertiginous view of both Port Phillip Bay and the Yarra River as seen from the fifty-sixth floor.

The apartment tower, Freshwater Place, is only a dozen years old, but the original design of this apartment was somewhat regressive – a festival of corridors, closed doors and dead-end spaces. The space did not flow at all, and the astonishing views were done poor service by the labyrinthine layout, only visible from certain rooms and poorly revealed to visitors.

John Wardle Architects has taken a fundamental approach to the interior, stripping the apartment back to its bare shell. Almost nothing has survived from the original interior. Within this shell, the plan underwent radical surgery and the result is a practical spatial diagram that offers generous visual engagement with the views to the north and the west through the floor-to-ceiling glazing.

One of the challenges when replanning the apartment was to retain all the sewer and water-supply points from the original plan, while opening the whole interior up to new spatial possibilities. This is not a trivial concern. Moving such things is usually not possible in apartment projects and, if it is possible, it is often too costly. In this project, the solution was to create a services core within the apartment, which sees the bathroom, laundry and powder room located in the centre of the plan. The other functions of the plan are arrayed around this core and are accessed by moving around the core in either direction.

Reworking the plan in this way had several benefits. Importantly, it reveals the western view of Port Phillip Bay on arrival, offering a long linear view through the apartment and the open study, linking the entry to the exterior as soon as the visitor crosses the threshold. Additionally, the revised circulation pattern allows for easier movement between the different spaces in the apartment, where previously there was a circuitous, corridor-bound single path between the bedrooms and the living spaces.

In contrast with the original plan, the living spaces have been completely opened and fluidly connected, with just diaphanous curtains separating living areas from the dining room and kitchen. The curtains also help cut down the glare from the full northern exposure. In the bedrooms and the study, similar curtains are used for privacy between the edges of the space. To make the view west feel less bounded and to emphasize its panoramic qualities, the last metre of wall between these three private rooms is made of glass, broadening access to the view from each room.

The materiality of the interior creates a warm, engaging and highly tactile experience for the occupant. The materials are delicious, and the focal moments of colour are memorable. The floors are universally a herringbone-laid European oak, and the walls in the living spaces are also in scalloped vertical oak boards, an extension of John Wardle Architects’ ongoing fascination with craft and making. Other materials in the interior include embroidered soft fabric panels in a neutral off-white around the services core, herringbone-laid travertine tiles on the balcony, richly hued leather wall panels in the main bedroom and lovingly hand-stitched leather covering on the steel shelving in the study and living room.

The entire interior is a testament not just to the designers, but also to a team of expert artisan makers and tradespeople, all united in their passionate working of the different materials on show. The builder’s commitment to the project was also second to none, and the quality of the result speaks for itself.

As Australia evolves its identity as a nation of city dwellers, apartment design moves increasingly into focus as an essential architectural skill. When the apartment in question exhibits this level of design quality and artisanal crafting excellence, then the city dweller is fortunate indeed.

Heating and cooling
Airconditioning by Griepink and Ward. 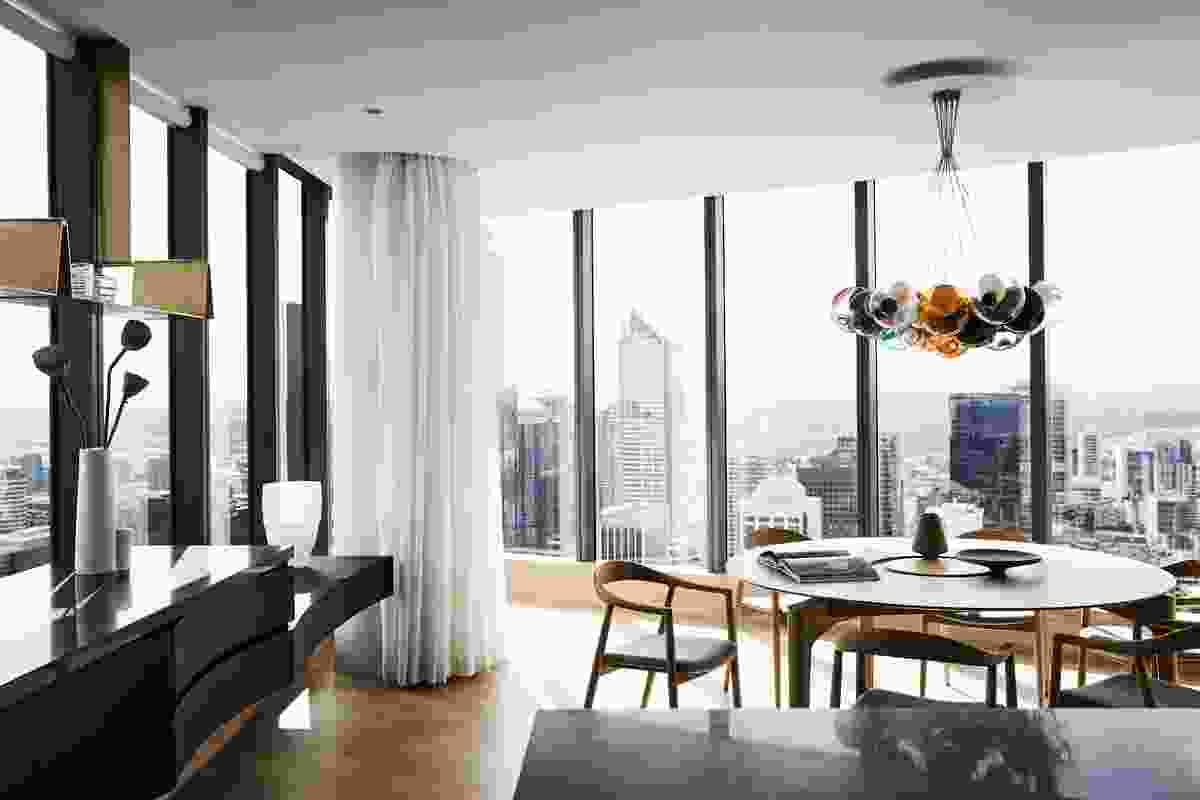 The apartment’s floor plan underwent “radical surgery” to make the most of the views. 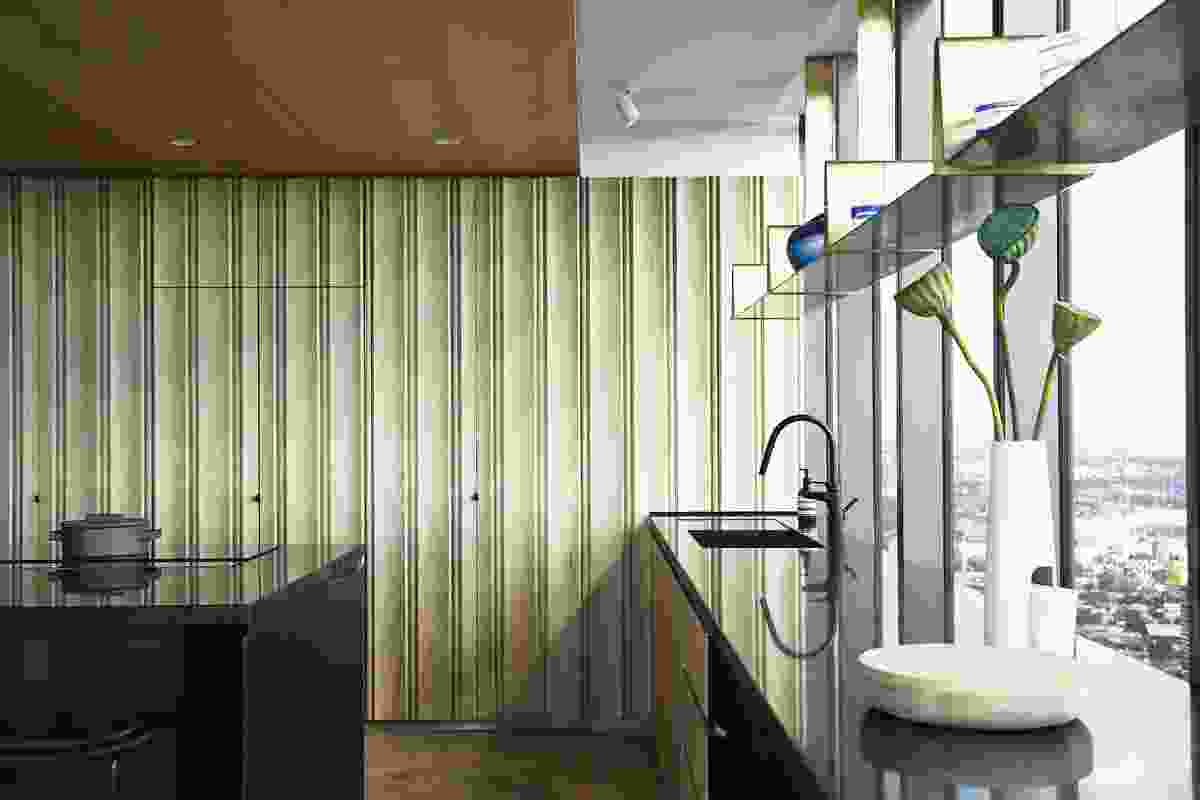 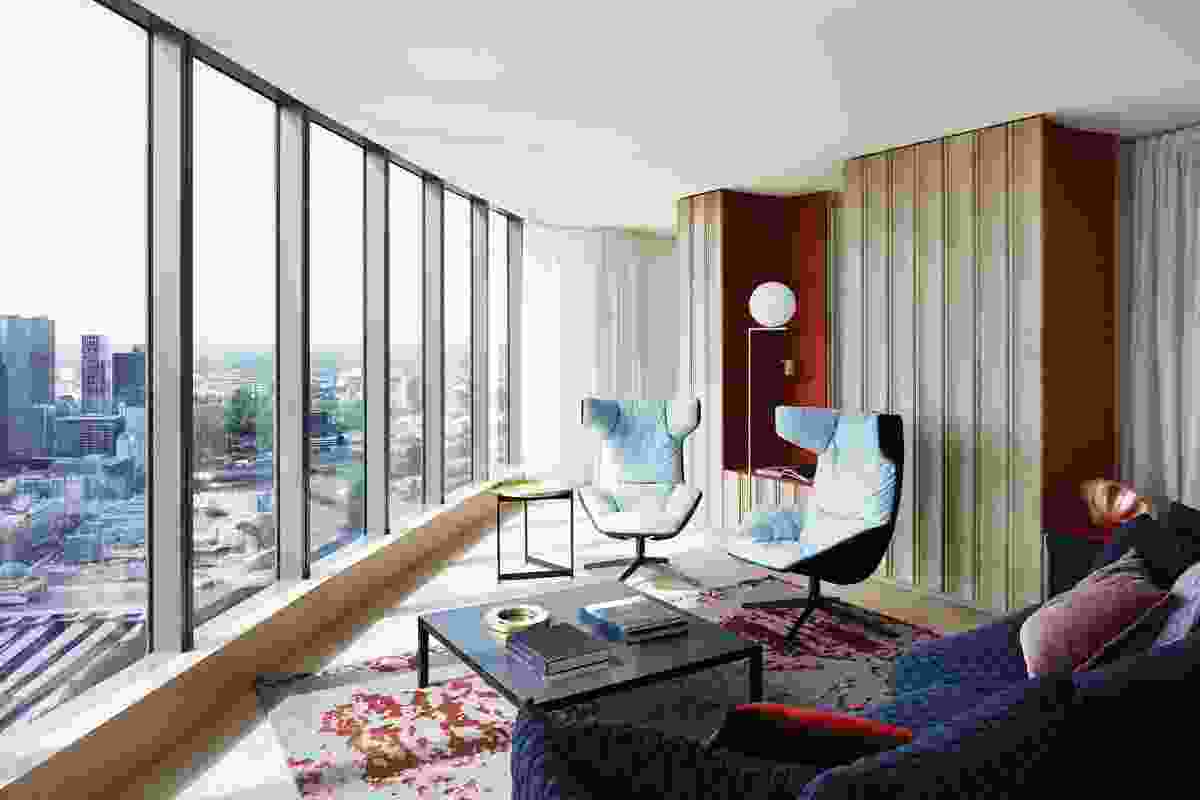 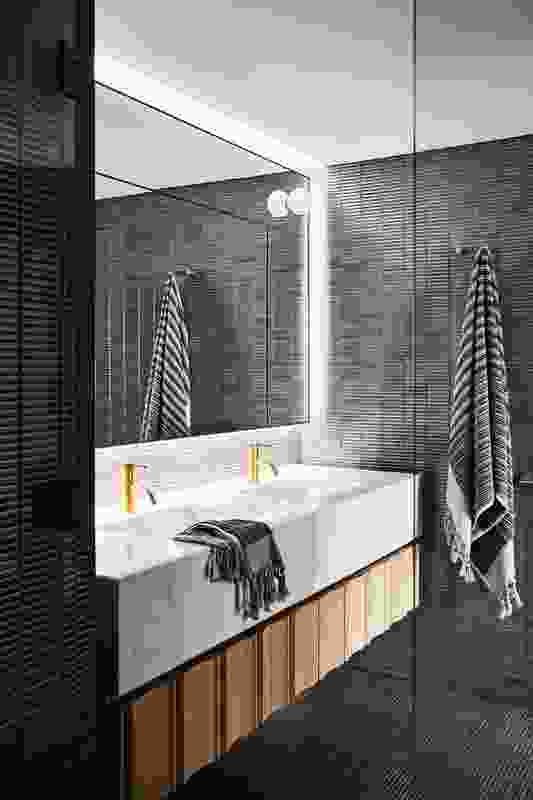 The juxtaposition of white marble and dark tiles lends the bathroom a quiet elegance. 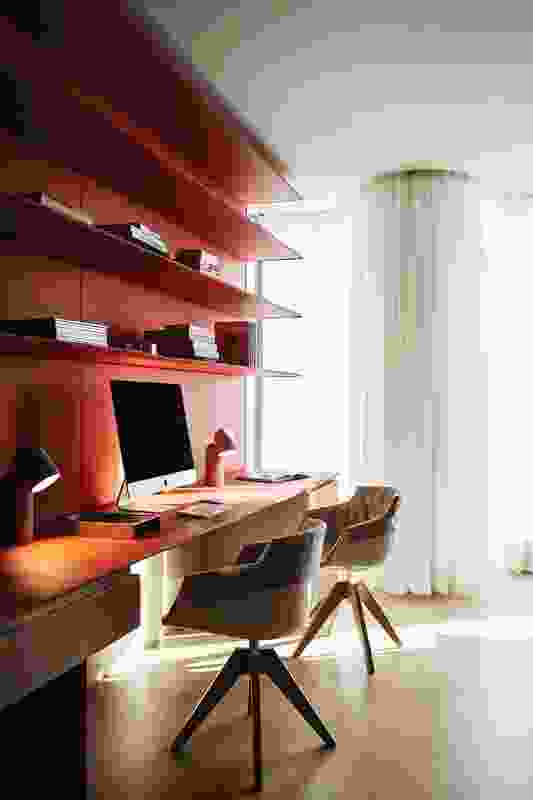 Hand-stitched leather coverings in the study are testament to the architects’ fascination with craft and making. 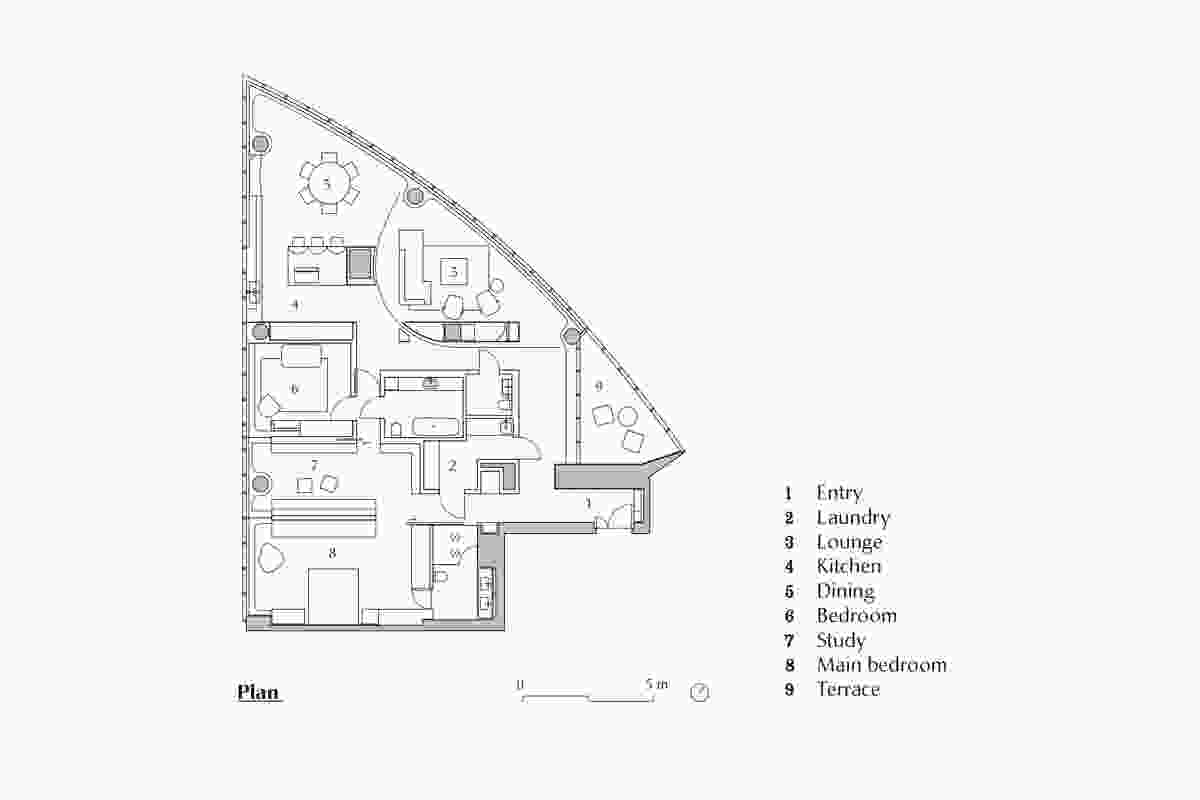