How should the architects of tomorrow learn? In an age of frontier technologies and open-source prototyping, the future is about rethinking the discipline as a dynamic system of relationships, writes University of Melbourne lecturer, Stanislav Roudavski.

Architectural-computing workshops have become increasingly important to developing innovation in design and practice. Pictured: SmartGeometry 2011 at the School of Architecture in Copenhagen.

Those who look to the future understand architecture as a dynamic system of relationships. These relationships blur the distinctions between digital and physical, natural and artificial, simulated and observable in the wild. Such an interpretation calls for broader collaborations and a commitment to explorations outside established “comfort zones.” But the life outside disciplinary comforts can be harsh. With old certainties left behind and new potentials not yet discovered, one can feel overwhelmed by the richness and complexity of available information and practices. In the contemporary condition of constant and accelerating change, what should an architect know and be able to do? From where should this knowledge be acquired and updated, from whom and in which way?

Innovation (and the learning of the new, needed for innovation to occur) can be encouraged through various strategies. The Continuing Professional Development program, participation in which is required to maintain architect registration in most Australian states, is already in place. Innovation can also be augmented outside existing professional territories via other types of critical, open-ended learning that is deliberately oriented towards uncertain futures. In striving to address unknown demands, such learning is necessarily speculative and risky. What strategies can be adopted to benefit from such risk-taking?

The Church of Colònia Güell, Sydney Opera House or Guggenheim Museum in Bilbao matter less as objects of practical convenience and more as narratives of innovation that inspire future experimentation.

In its capacity to imagine, prototype, critique and implement possible futures, design has a unique competitive advantage. Architecture’s ability to shape tomorrow’s places is more significant than its role in producing buildings. The Church of Colònia Güell, Sydney Opera House or Guggenheim Museum in Bilbao matter less as objects of practical convenience and more as narratives of innovation that inspire future experimentation. In the face of daunting challenges, these projects had to advance well beyond contemporary practices and are now seen as precursors – respectively – to form-finding approaches, computational structural analysis and integrated designing of complex geometries.

It seems likely that in the future, increasing proportions of situated social life will be sustained by digital technologies that have been designed and produced outside of architecture and without architects. In an extreme case, the buildings surrounding New York’s Times Square are now nothing but scaffolds for moving-image ads, with no internal habitation. Such media facade systems are standard rectilinear screens that are disconnected from the specificities of their hosts. Their commercial content is also out of architects’ control. And yet, with adequate expertise, such systems can be productively integrated with architectural design objectives as demonstrated, for instance, by Tim and Jan Edler’s Berlin practice Realities:united. Its projects, such as the BIX media facade for Graz Art Musseum, use simple but bespoke components, project-specific geometries and innovative curatorial strategies for the provision of media content, while integrating it seamlessly into the building’s skin. In the case of such hybrid environments, learning that is focused on conventional building types is insufficient. In order to cope with new challenges and demonstrate architecture’s ability to contribute to new kinds of places, the discipline ought to extend beyond the boundaries of its institutional knowledge and to the very edges of its creative control.

How do we get to the edge of control? One site of such advancement is in architecture schools, which can, and should, sustain creative research explorations into new possibilities. For example, The Emergent Technologies and Design Program at the Architectural Association School of Architecture in London, run by Michael Weinstock, is productive in straying from current industry expectations and moving towards speculations on the future of practice. It extends past conventional types by adopting a focus on biological materials systems and seeking to derive new approaches to form-making not from the canonical knowledge of the discipline applied to particular sites and briefs, but from systematic analysis of biological systems and from speculations on their potentials in architecture. An example might involve computational and physical examinations of a tree structure in terms of organization and structural performance, an implementation of its branching using L-systems, finite element analysis of resulting structures and reimplementation of the branching in a site-aware fashion.

In a rapidly changing world with many possible edge-of-control projects, which ones do we choose? Given the impossibility of definitive forecasting, one ought to prepare for multiple possible and incompatible futures. Critical pedagogies are effective for such preparations because they encourage conflict as a strategy that is capable of sustaining multiple alternatives. Outside of architecture schools, architectural-computing workshops have become particularly important for cultivation of multiplicity. Hundreds of diverse workshops take place every year with some events – such as the annual SmartGeometry workshop – run in multiple topical streams by peer-selected teams. SmartGeometry attracts a diverse crowd of practitioners, academics and students from a broad range of backgrounds and is effective as a catalyst in many communities of practice. This event has been hosted on different continents and its topics have ranged from digital fabrication to real-time data gathering, from geometry optimization to dynamic simulation and from digital crafting to building information modelling.

The ability to program becomes more than a purely technical skill – it is a principled stance in support of collaborative innovation, creative freedom and future relevance.

In order to be efficient in borrowing from the field and effective in contributing to it, speculative projects and critical pedagogies need to be “total.” They cannot afford to be confined to formal educational institutions, early-career training or particular specialisms. Openly shared development of tools and techniques helps to produce lasting value by distributing responsibility and control, wasting less energy in redoing things, reducing the risk of failure and enabling broader access to ideas. Such open collaborative approaches require engagement with programming because computer code allows rigorous communication across disciplines. The ability to program becomes more than a purely technical skill – it is a principled stance in support of collaborative innovation, creative freedom and future relevance.

Python programming language is a good example of a non-proprietary collaborative environment that supports a mature ecosystem of tools for many computing tasks. Python has been incorporated into many commercial content-creation programs such as Rhino and Maya. It can also be used to control other programs, including AutoCAD, 3ds Max, Revit and Inventor. Python can link these programs with each other and reach out to the extensive interdisciplinary research beyond.

The open-source movement is becoming similarly influential in physical computing, as evidenced by the popularity of Arduino, an open-source electronic prototyping platform for the creation of interactive electronic objects. A picturesque example of the possibilities is the Flight Assembled Architecture project by Gramazio & Kohler and Raffaello D`Andrea and the Architecture and Digital Fabrication unit of the Swiss Federal Institute of Technology (ETH Zürich). In this project, a curvilinear form of a six-hundred-metre “vertical village” is assembled as a 1:100 model by a team of quadrotor helicopter drones. Such unmanned aerial systems can be built with Arduino-compatible components developed within open-source communities such as DIY Drones. Inheriting cheap miniature sensors and processors from massively popular smartphones, robots produced in this way already outdo their military counterparts in terms of prices (dramatically), functionality and a variety of applications, prompting a vision of open-source personal robotics that, in the near future, will be as ubiquitous as personal computing is today.

Learning for the future

The Product-Architecture Lab at Stevens Institute of Technology program in the US sees architecture as a domain where computation is at the centre of all core processes.

Speculative learning, sustained by exploratory, critical and total pedagogies, provides opportunities to consider relevant, questionably relevant and frankly “out there” issues, and encourages unorthodox thinking about career paths, business models and cross-disciplinary collaborations. A good example is the effort to re-imagine the discipline through recent innovative programs such as The Product-Architecture Lab at Stevens Institute of Technology in the US. This program sees architecture as a domain where computation is at the centre of all core processes. Mixing architecture, engineering, product design and interaction, it expects fluency in computational methodologies from future designers, including abilities to use performance criteria to guide form, employ computation in fabrication and use sophisticated data management. The program acknowledges limitations of school environments and stages close collaborations with innovative designers, engineers, scientists and manufacturers.

Rethinking the discipline through speculative and inclusive edge-of-control projects is a difficult challenge that requires systematic forays into the unknown. These journeys outside disciplinary comfort zones need to be consciously encouraged by the architectural community. Supporting critical and total pedagogies, for example through the structures of accreditation or targetted funding for speculative work, can help to reconfigure learning patterns that focus on the lessons of the past into those that are also capable of preparing for the future. 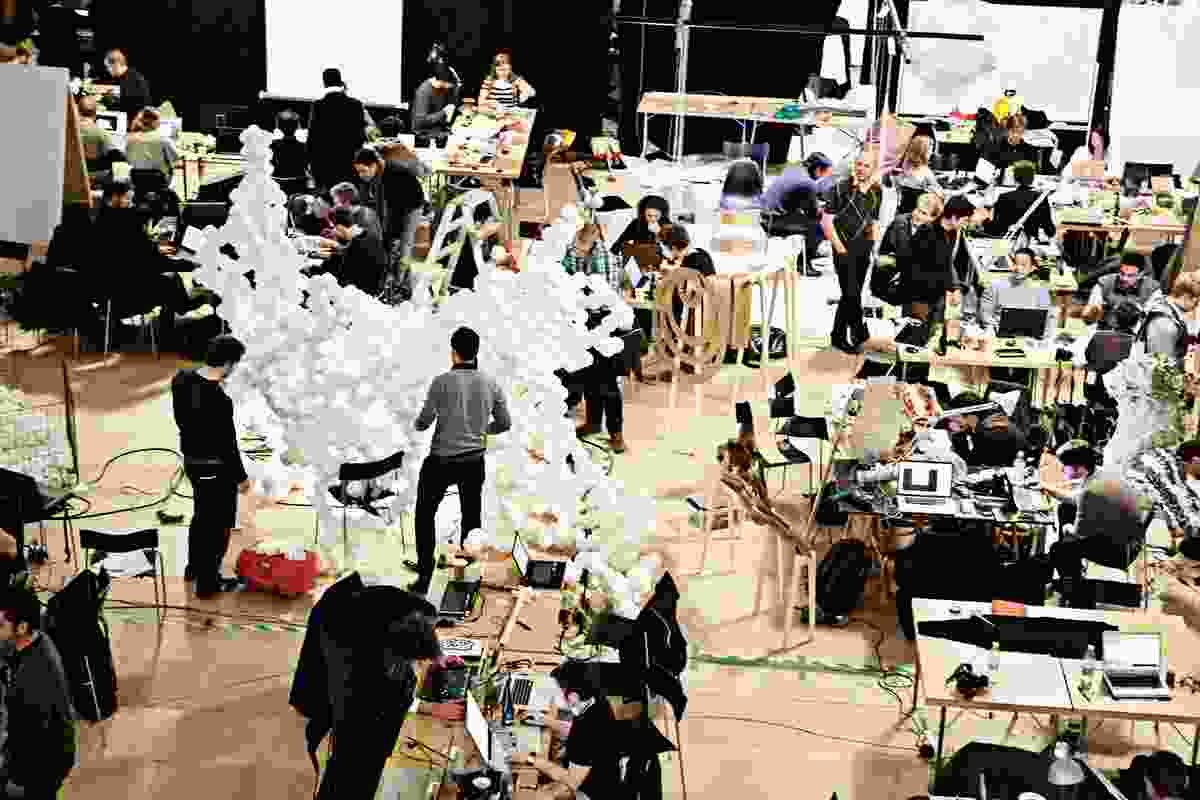 Architectural-computing workshops have become increasingly important to developing innovation in design and practice. Pictured: SmartGeometry 2011 at the School of Architecture in Copenhagen. 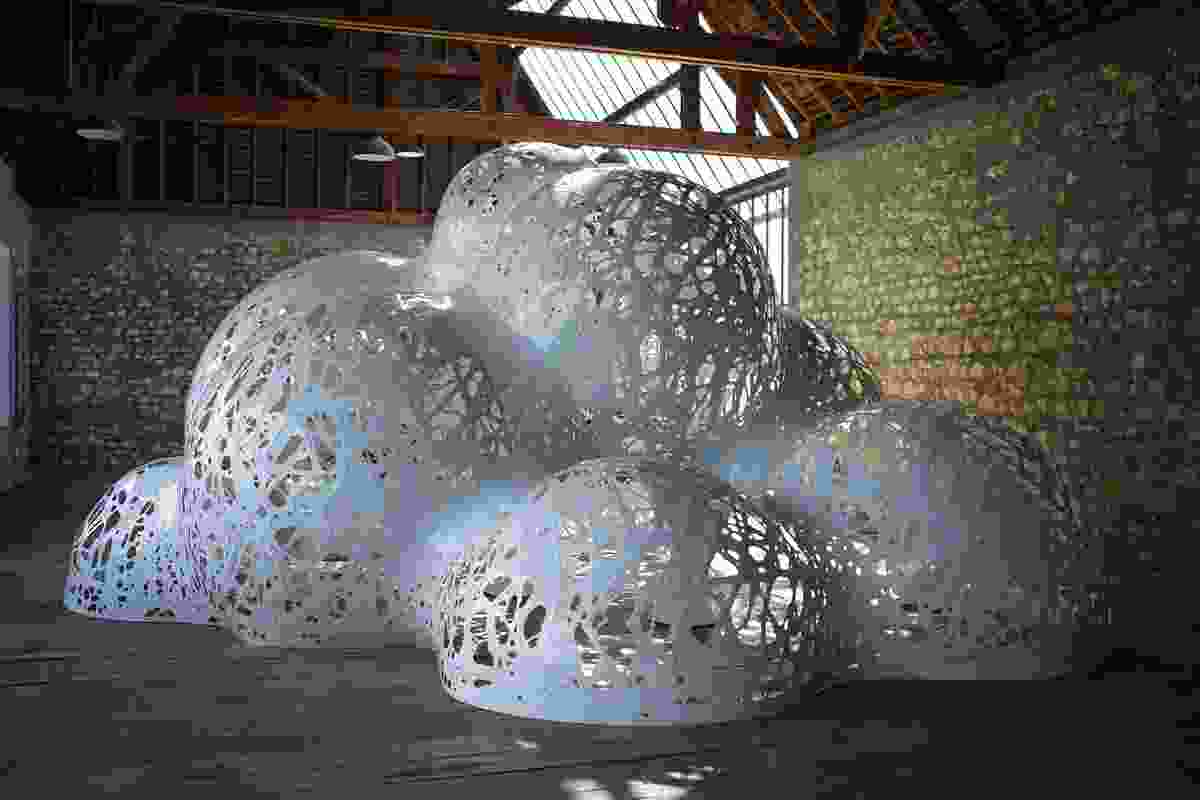 Composed from the intersection of nine spheres, Double Agent White by Marc Fornes was created using the Python programming language at Atelier Calder in July 2012. 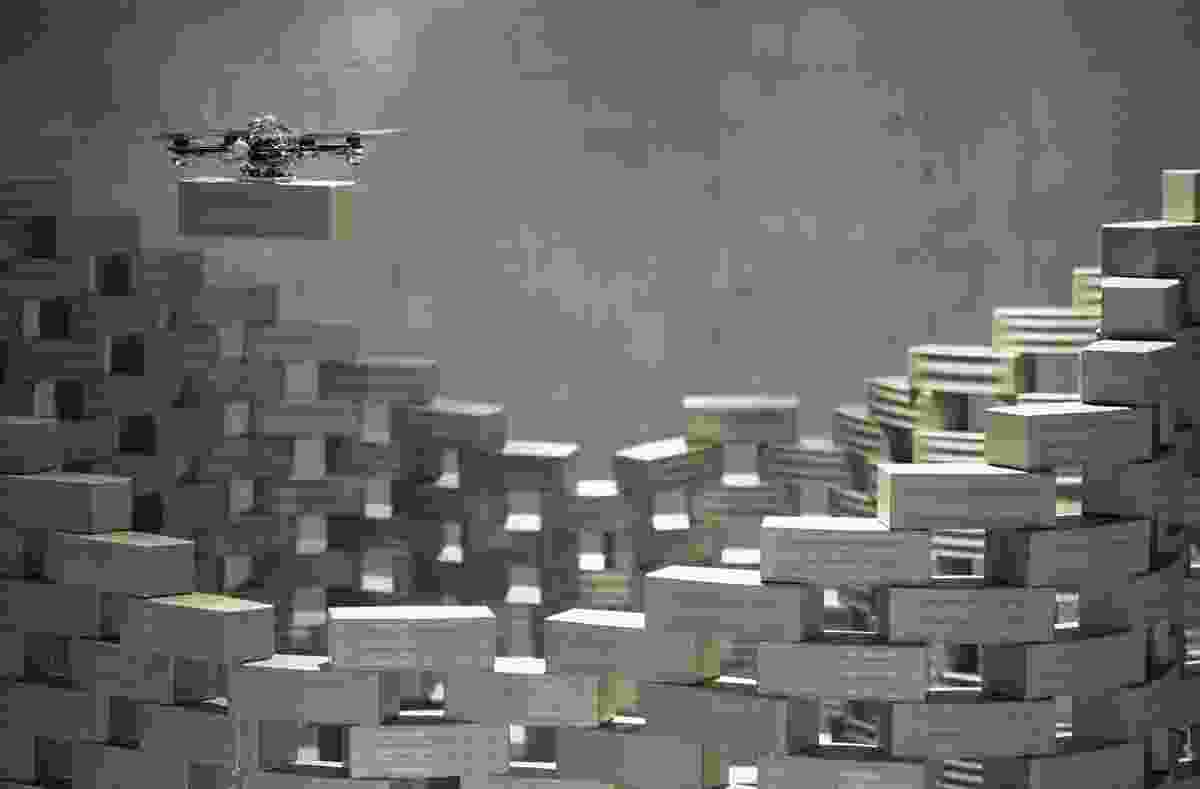 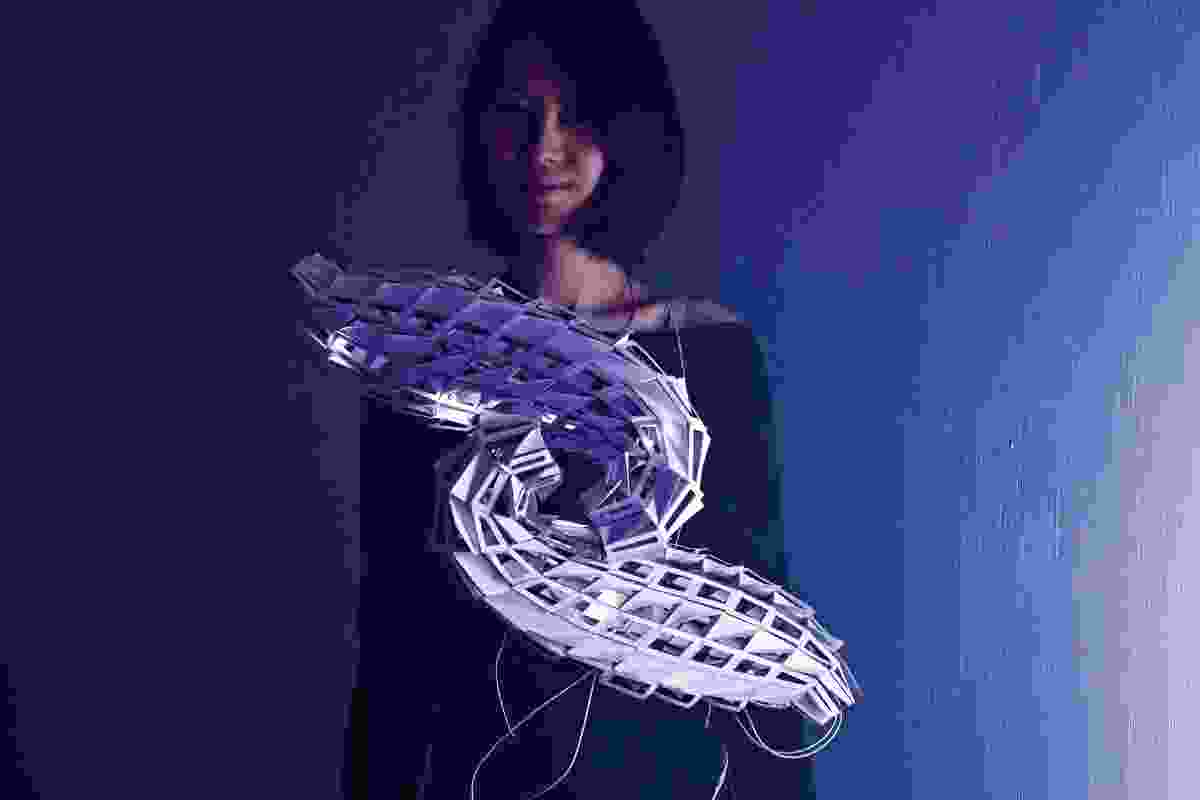 The Virtual Environments course at the University of Melbourne emphasizes analysis and use of nature-inspired processes for form-making of “wearable architecture.” Model by Tammy Hu.