The civic expansion of Port Hedland requires a thinking beyond the life span of the mining boom. Perhaps the answer lies in “urmadic” design.

Through its exporting of iron ore and material from the other extractive industries in north-west Western Australia, Port Hedland has become the largest bulk export port in the world. Handling just under two hundred million tonnes in 2010/11, the Port Hedland Port Authority has now set a target to at least double this volume, but to do this requires the building of a new outer harbour. Meanwhile, dredging is already underway to increase existing port capacity.

Currently Port Hedland and South Port Hedland combine to form a city of around fourteen thousand people. Its international airport, which will undergo a $45 million upgrade in 2012, provides key infrastructure for the fly in / fly out (FIFO) labour-based minerals economy. But to be able to develop the city and the port a much larger and more stable workforce is needed. The projected scale of this workforce means massively increasing the size of the city’s population to over fifty thousand people by 2020. The current plan is to continue releasing crown land for house-and-land packages (in a town where the median house price is $1 million), upgrading infrastructure and instigating a town revitalization program in the hope that Port Hedland becomes an attractive place to stay after the boom.

The reality is different. The region is in a cyclonic belt and has a low annual rainfall of around three hundred millimetres. It is extremely hot. As one local talking to ABC Radio put it, “when you can cook your breakfast on the pavement, right, it’s maybe not the place to retire.”

Moreover, climate change projections suggest the region will become exposed to increased impacts, so an already harsh environment will likely become harsher. There are also other negatives. Much of the natural environment carries the scars of exploitation. Likewise, the social make-up of the city is not great: with its large FIFO element, life can be pretty raw. Its reputation has been marked by another factor: between 1991 and 2004 it was the location of a notorious immigration detention centre that was the scene of major riots in May 2001. Being remote and having major transport infrastructure means it may still be seen by the government as an “ideal” place for such a facility. Port Hedland may have some positives, but for many Australians the city is just not viewed as an attractive place to settle.

Before the city expands its fate is already sealed. The mineral resources of the region are finite and are likely to be exhausted either this century or next. Effectively, an ultimate exodus of people is a structural condition of the place – the boomtown can and will become a doom-town. This situation is not exclusive to Port Hedland. The eventual decline of the export of the mineral wealth of Australia will have similar consequences in many other places. To recognize this is to realize that another kind of approach to urban design is needed.

Two key and related questions now beg to be addressed. The first: How do we appropriately design rapidly expanding cities that have a short life? The second: How do we also design for their future after the mining boom is over?

For tens of thousands of years Homo sapiens survived by moving as the climate changed; nomadism was not just about searching for food. This movement was a major factor in the global distribution of the human population. But for the last ten thousand years or so, as urban settlement has developed, we have become ever more static.

Over coming decades it will be increasingly recognized that as a result of the arrival of even huger and more dense cities the risk of massive disasters, including extreme weather events and other threats to human security, will dramatically grow. Issues of protection and mobility will come into play, as the combined challenges and dangers of climate change, food, human security and geopolitical realignments are enormous. Some cities will try to find ways to physically protect themselves; many will not. Option two is the arrival of the urmadic – urban nomadism.

Just as nomadism cannot be reduced to just one way of life, nor can urmadism. Cities that move might be very basic in prefabricated form, economy and lifestyle, or they might be very technologically sophisticated. Movement would likely be measured in years or decades. As demonstrated by the 1964 Archigram project Walking City – a moving, robotic city freely roaming and producing and dispersing its power – the idea is not new. More problematically, the Metabolist movement also demonstrated the flexibility and responsiveness of cities to their environment through projects analogous to organism growth from a central nucleus or core. What is new, though, is the coming scale of the need.

Back to Port Hedland

Confronting the future of cities like Port Hedland affords the opportunity to think about the form and process of the urmadic society, both economically and in terms of design. It is appropriate to recognize that it will not survive in its expanded form – this is clear even before this form arrives.

Urmadic cities are specifically designed to be moved many times. The starting point is not the technological form of the city but the relational nature of its economy, social fabric and material delimited way of life. It is not a matter of moving the city that we are familiar with; the form of the city has to significantly change. This leaves many questions for the urmadic city designer: Can the city be designed to have an enduring core? Can a city be designed in time and not just space? How will ownership take place in a dynamic environment?

In the case of Port Hedland, could the mining equipment clustered around the city also be made the means to move it? Could all the structures come out of the earth and return to it, with what is mobile aiding in working and living? Could the knowledge, skill and technology itself be a marketable economy?

In the mix of possible futures the urmadic (irrespective of how it is named) will not be a question of choice. That we humans are bad at long-term vision and action cannot be accepted as an ontologically fixed condition, but rather one that has to be learnt to be transcended. 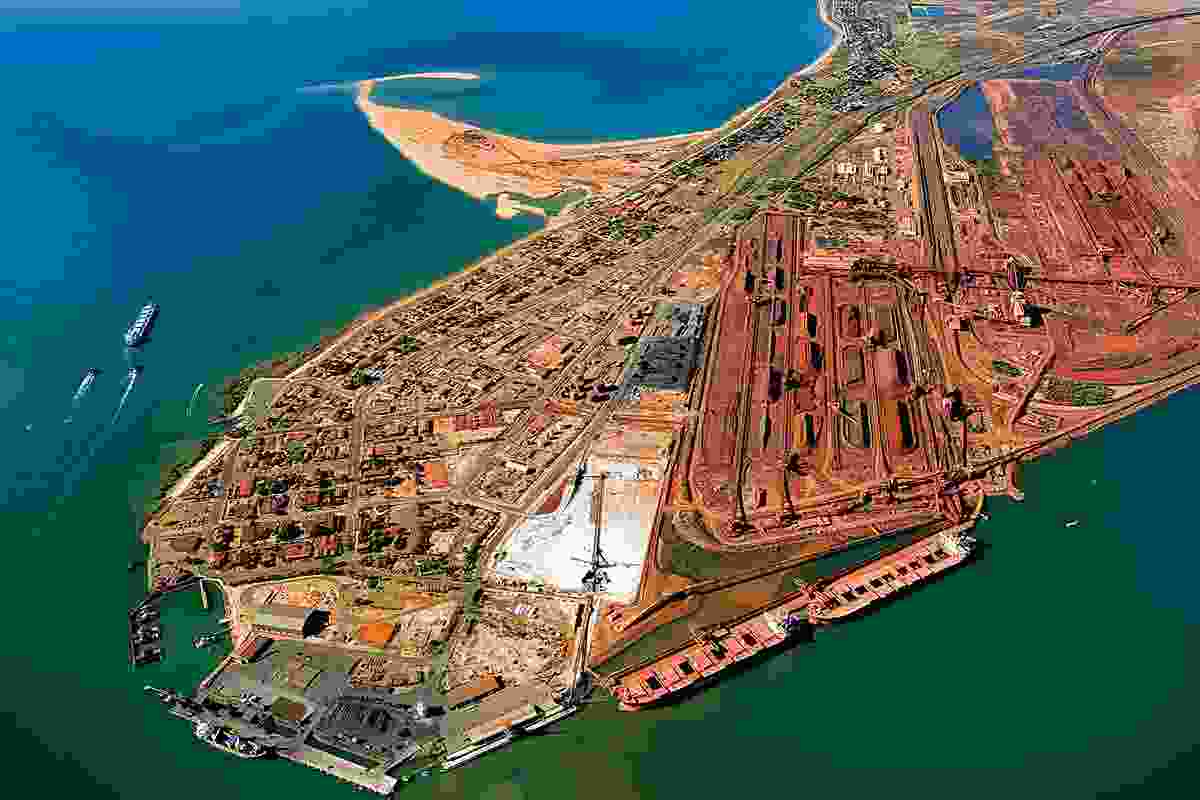 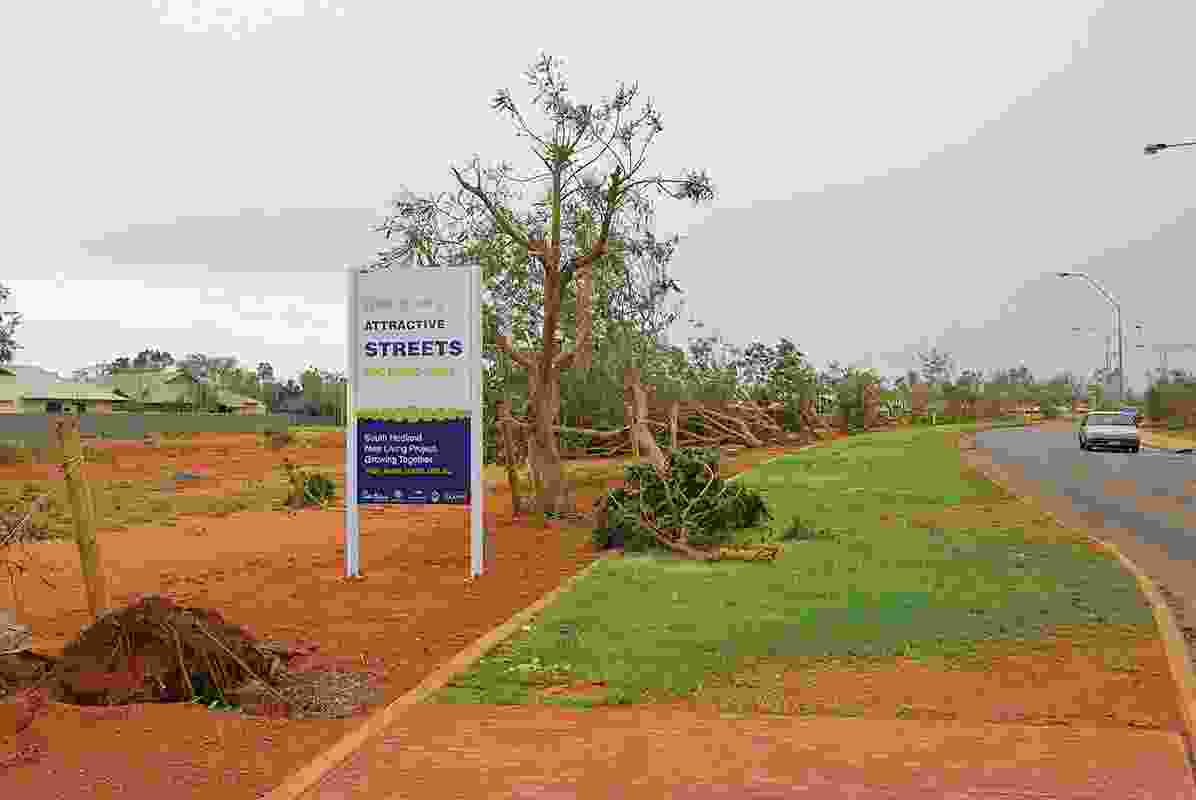 “We’re growing attractive streets.” Living in a cyclonic belt: newly planted trees were blown over by Cyclone George in March 2007.