On the fringe of Fremantle, Officer Woods creates a cluster of courtyard houses. Their clever manipulation of space explores infill density by increasing the number of people per dwelling without diminishing the quality of outdoor areas.

The four houses at 58 Stevens Street read as a singular object.

Fifty-eight Stevens Street, designed by Officer Woods Architects for EarthCare Developments, is a group dwelling located in White Gum Valley, a suburb on the fringe of the port city of Fremantle in Western Australia that is characterized by its hilly topography, scrubby bush, limestone outcrops and unrelenting sunshine. These four adjoining house units are stretched between two distinct faces, and between civic and domestic aspirations.

The western face, which looks back towards the city and an electrical substation, is a sheer wall of Zincalume – a commercially scaled face that presents as a singular object. It can be seen from points all around the suburb, like a beacon glinting in the sun. It reads as a big house, or a factory, like a transplant from the nearby industrial area with only a few recessed holes as admissions to the internal program.

The eastern face is broken down into a series of single-storied fingers that reach out into the suburb. Domestically scaled, it is punctuated by gates and the crushed limestone walls that slice through the site, separating it both visually and for fire safety purposes. These two opposing faces are mediated by the street elevation and an over-scaled, overly flat crushed limestone wall that is set amongst dense local planting, with the clerestories peeking up from behind and the double-storey section obscured by trees.

These faces create two distinct entry modes on which the project centres and provide flexibility in the layout, which accommodates a range of living configurations.

Fifty-eight Stevens Street is a continuation of themes explored in recent Australian publications Take 7 and reHousing, which examine the typology of the flexible, adaptable house. These works are characterized by multiple points of egress, flexible spaces (such as garages that double as rooms) and the provision for the division or addition of units. The key to this project is the integration of flexibility within the structure of the house, which allows for changes in the setup as the occupants’ desires morph.

This inherent flexibility is achieved in two major moves. The first is the creation of separate entrances. To the west is a generous driveway, which has garages and alternate entrances opening from it. To the east is an 1800-mm-wide civic walkway, which is the main entrance to the houses. This allows for a later breakdown of space, providing a distinct entrance for each of the potential subdivided units. The second strategic move is the central placement of a service-loaded and double-plumbed blade wall in the living area. This wall allows for the future erection of a central partition wall, enabling the house to be split into two units, both with their own power, water supply and entry points. This ability to reconfigure the space allows for a diversity of post-occupancy combinations. The ground-floor bedroom and bathroom are universally accessible, allowing for the accommodation of the elderly or invalid. The imbued flexibility is a testament to the vision pursued by the architects, as well as to the support from the client, EarthCare.

This project explores infill density, providing more people per dwelling rather than an increased building density that diminishes the quality of outdoor space. Retaining a sense of the suburban condition is vital in areas such as White Gum Valley, which is not suitable for the aggressive infill developments that are typical of inner-city areas. In essence, these are regular suburban houses, but they are highly composed and compressed. They comprise familiar elements: a driveway, a double garage, side paths and front gates. The backyard becomes a courtyard; the garden shed is there, but absorbed within the house, with access to both the courtyard and the kitchen allowing it to double as a more useful pantry space. The garage includes a wine cellar, but here it is made of two-stacked concrete soakwells that are buried with a retractable ladder. Space is highly efficient and deliberate in its composition, which enables the diversity of occupational modes.

Aside from the recycled limestone walls that cross the site, the external cladding is reduced to two materials, and the finishes have been left as found. Zincalume sheeting has been applied to all exposed external surfaces, including the roofs and the sheer western face, while all soffits and reveals are clad in sealed fibre cement sheeting. External materials are screw fixed to allow for easy access. Internally, the ground floors are polished black-pigmented concrete, thickened to the extent of winter sun penetration.

There are elements of this project that are undeniably hard. It plays with scale; in some places it is overbearing, in others intimate. It doesn’t retreat from the harsh western sun, it addresses it. The Zincalume’s sparkle can be blinding, the raw fibre cement sheeting reflecting sunlight like white sand at the nearby beach. These are not easy materials. But the building shell is efficient, allowing for moments of luxury, like the kitchen and the industrial glazing.

The success of this project lies in its exploration and acceptance of local limits. For Officer Woods, these limits are liberating. This project does not fight the restrictions imposed on it, but instead it revels in them. The suburban setting and language is not challenged, it is reinforced. Codes and regulations provide opportunities, not restrictions. This is a continuation of a tough architectural lineage in Western Australia, stemming from a deep-rooted make-do attitude, working within restricted local limits. “Frugality remains a priority … where range of materials, degree of servicing and tectonic flourishes are kept to a minimum,” wrote Geoffrey London and Simon Anderson in Architecture Australia (May 1990). Following in the steps of Western Australian architects Peter Parkinson, Brian Klopper and Simon Anderson, 58 Stevens Street works with these constraints materially, mentally and physically. The result is a work that not only engages with place, but also confronts it. 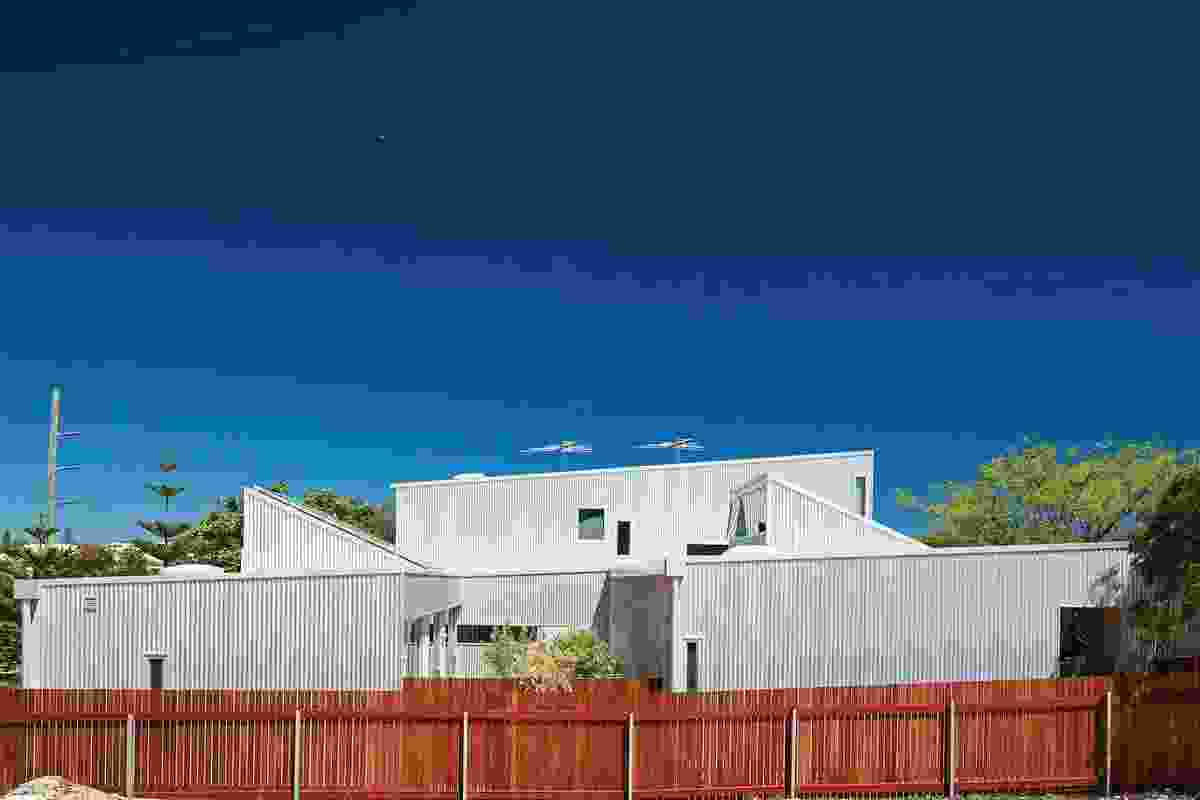 The four houses at 58 Stevens Street read as a singular object. 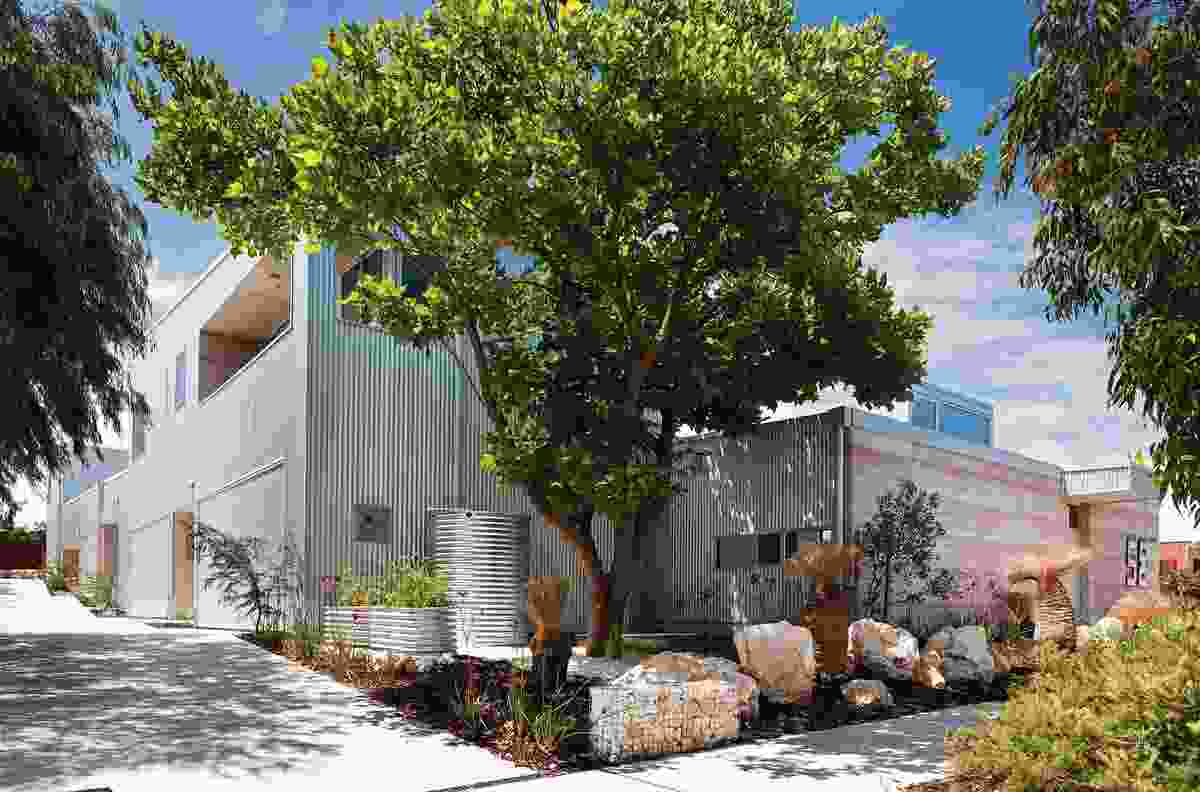 A shared driveway creates generous access on the western flank. 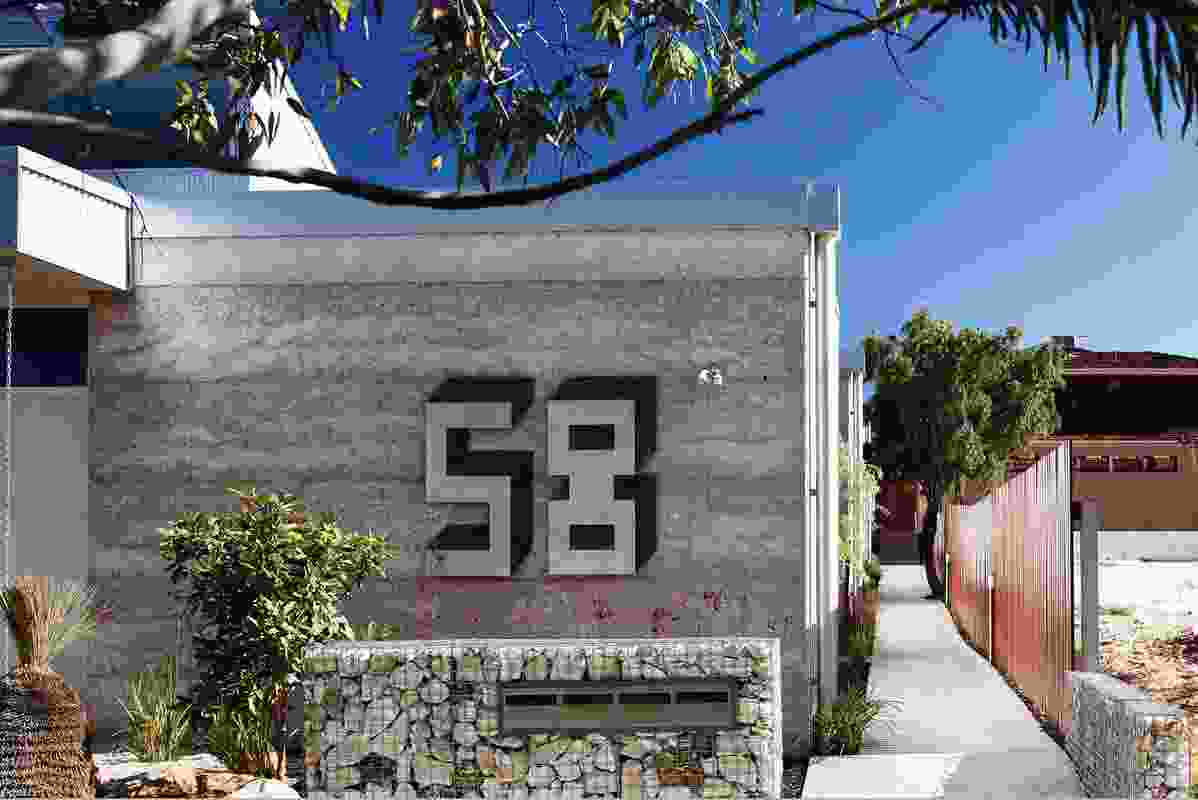 A wide walkway provides access to the main entry of each dwelling. 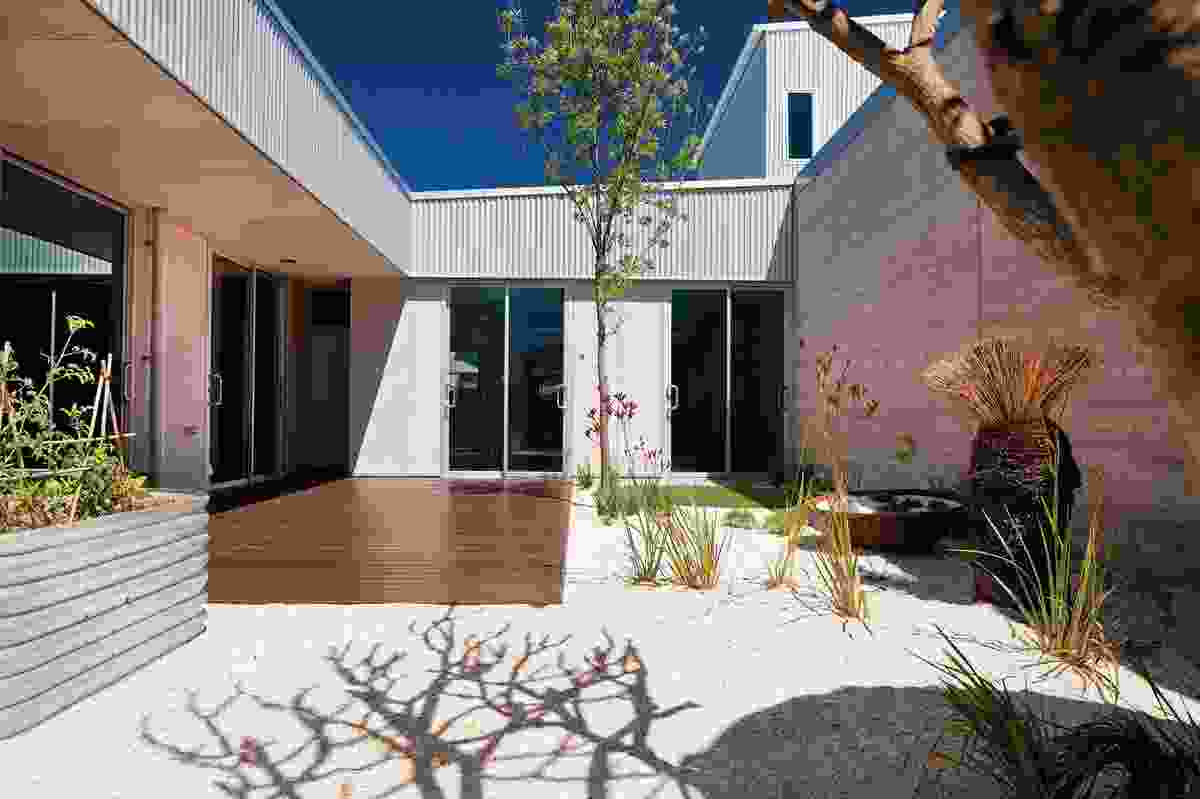 The internal courtyard replaces the backyard in a reinterpretation of the suburban house typology. 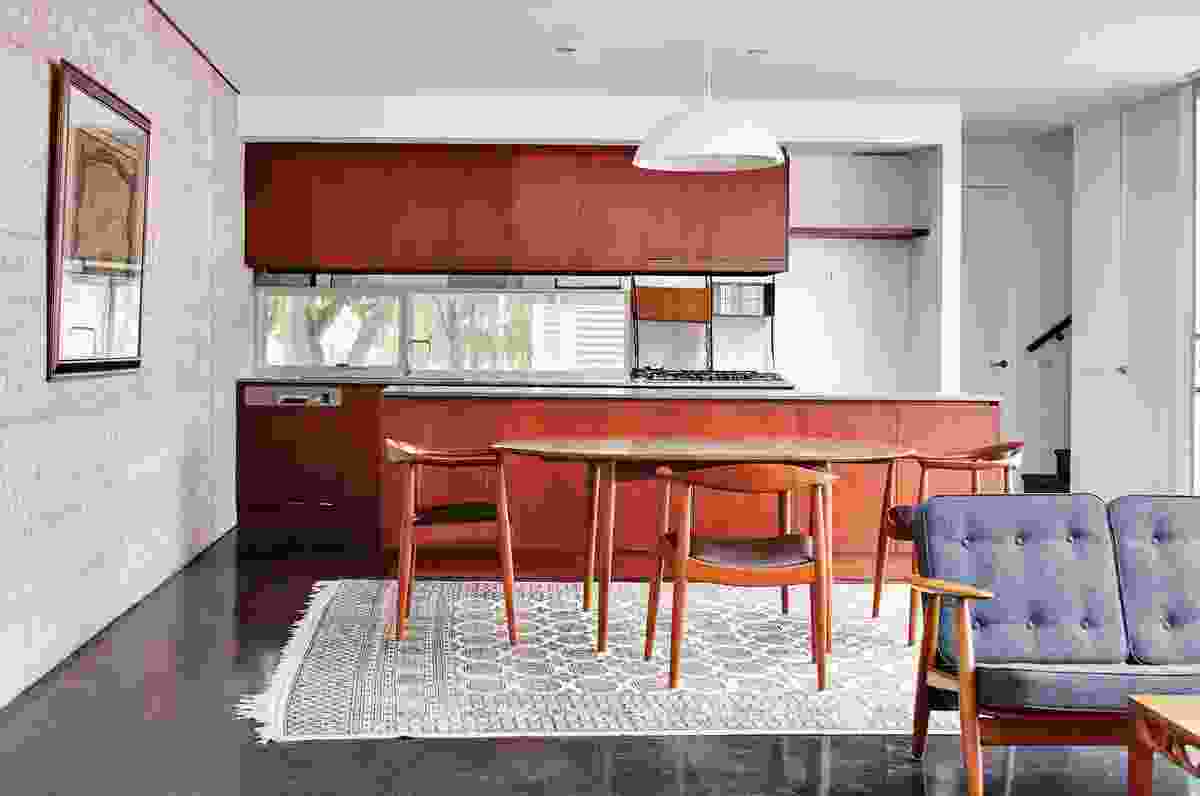 Kitchen detailing provides a moment of luxury within the efficient, rational design. 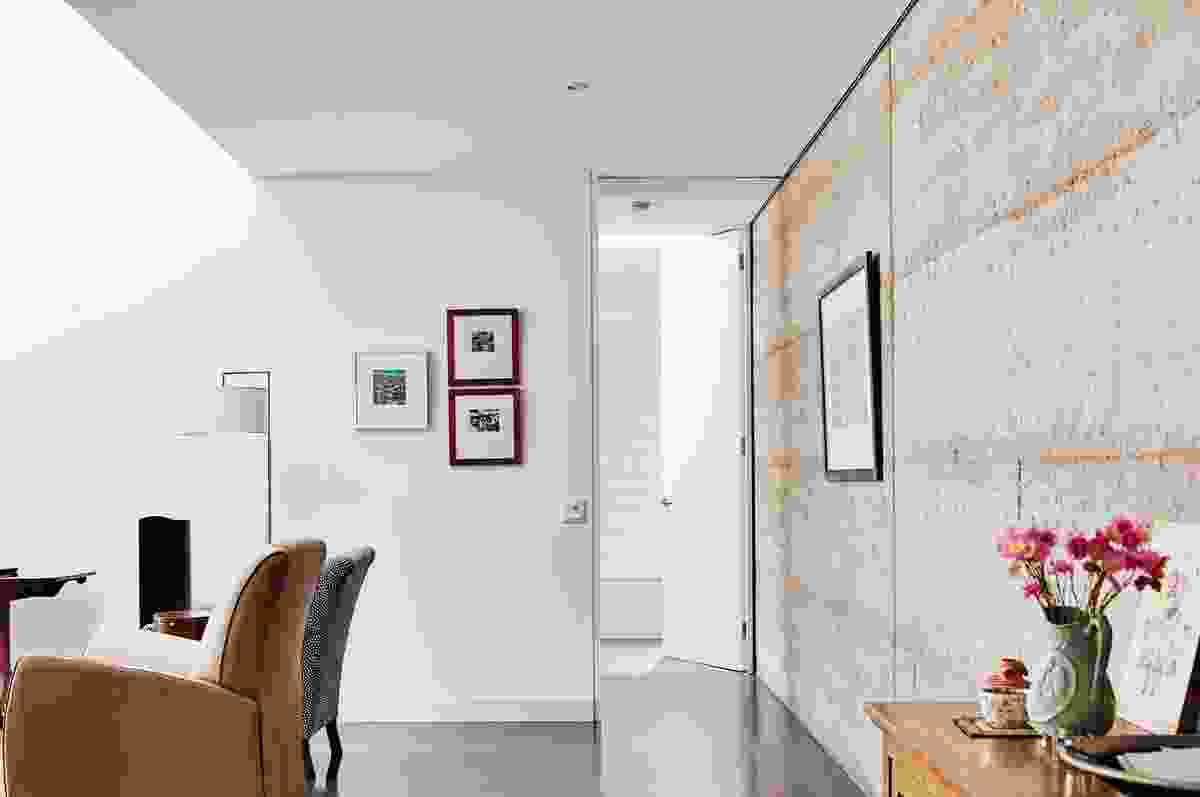 The ground floor can be partitioned to create a separate residence. 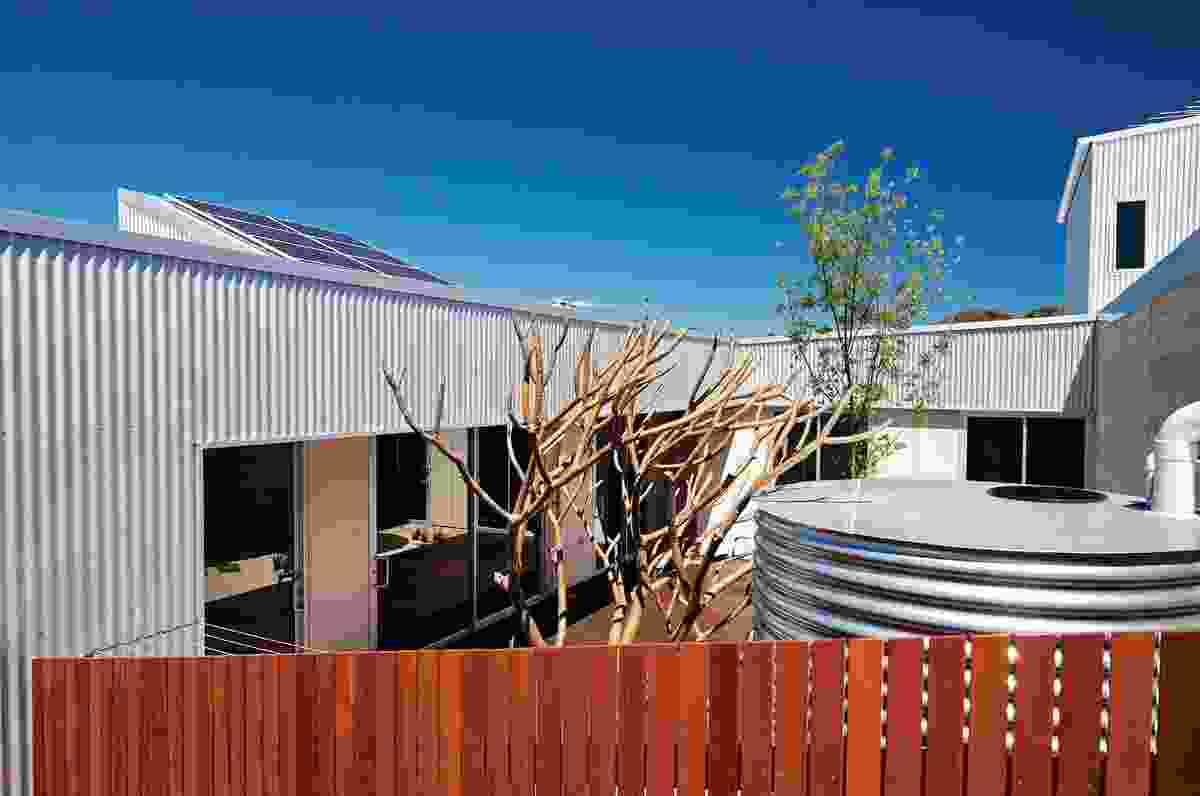 Zincalume has been applied to all exposed external surfaces.