The equal emphasis on garden and building for this home creates spaces that become a “tranquil backdrop for busy lives.”

The design strikes an intentional visual balance between garden and residence.

Mark Pearse distinctly recalls the library book that propelled his interest in architecture into a career. It was one of a series devoted to icons of art, and Mies van der Rohe’s Barcelona Pavilion had the greatest impact. Famous for the maxim “less is more,” Mies designed buildings of unprecedented modern elegance, contemplative, fluid spaces based on material rigour and structural integrity. This house alteration in Sydney’s inner west shares several Miesian hallmarks, including its “floating” roof atop full-height glazing, a reflective pool bridging indoors and out, a fluid plan and neutral, natural finishes.

Built for its current owners some twenty-five years ago, the house occupies a site facing north-west towards Cockatoo Island. When the family residence called for an update, it wasn’t the main living rooms and bedrooms at the steep rear of the property that demanded attention. Instead, the entry, kitchen and unsung minor rooms at the front would benefit from architectural intervention.

In essence the project, a collaboration between architects Mark Pearse and Brian Kiernan, addresses the part of the house that faces the street, seeking to improve its internal spaces and relationship to the garden. Additionally, the design had to resolve issues of overlooking from a neighbouring two-storey residence.

On purchasing the property in the mid-1980s, one of the first things the owners did was to plant a cluster of palms and one of Brian’s first ideas was to locate the entrance around this group. “When you arrive at the property you are really struck by the garden and particularly the established trees,” explains Mark. “The owners love the garden and obviously put a lot of effort into it, so it was really important to respect the exterior space as much as the interiors.”

Mark and Brian’s design strikes an intentional visual balance between garden and residence, allowing the tall trees to retain dominance in the spatial hierarchy. Flattening the roofline helps to scale down the built form among the large jacaranda, angophoras and tapering palms. “When you walk into the garden, you’re walking among tree trunks that create a very graphically vertical plane from the ground to the top of the canopy. Given the single-storey form, the idea was really to emphasize the lower scale of the building with an equally graphic horizontal roofline.”

A generous eave shelters the landing while the red lacquered door signals your arrival. Concrete and steel beam construction techniques permit the low, flat roof to be freed of corner pillars so as to appear suspended in midair when the glazing is fully opened. This floating appearance gives the volume a sense of weightlessness that oscillates between enclosure and openness.

With the floor plane set 750 mm above the garden, it was decided to introduce a watercourse as an intermediary plane. Allowing the water level to disappear under the floor of the family room makes for a seamless connection. From the garden, the mass of the pond and garden bed structure leads the eye up to the house, while from the interiors the garden pond provides the vital step into nature. The pool refracts dappled light into the house and provides an oasis in which the eye can rest. Replacing compacted gravel with flagged sandstone pavers quarried from an area near the owners’ farm vastly improves the enjoyment and appearance of the courtyard. With its reflecting pool and stately trees, the courtyard becomes a tranquil backdrop to busy lives.

Internally, the original connection between spaces was poorly orchestrated. Mark and Brian proposed widening the connection through the house and loosening up the clutter of small rooms to improve circulation. Their solution comprises a new kitchen, an expanded breakfast/family area that opens onto the garden, a revised study and a powder room. The resulting layout is intentionally fluid. Stepping joinery elements placed carefully across the east–west axis frame the garden vistas while screening out the neighbours.

Modernist intentions prevail throughout and a beautifully natural material palette reinforces the connection between indoor and out. A fairly low level of detail was adhered to, not in an effort to be overtly minimalist, but in order to work within structural and practical constraints, including a 2.7-metre ceiling. All vertical lines in the open-plan areas – doorframes, glazing, joinery – are unbroken from floor to ceiling to increase the sense of elongation. Pale, straight-grained timbers used in the joinery blocks were chosen for their sheer, stretched appearance. Timber floors were treated only with hand-ground pigments and stains made from organic matter such as walnut shells. Rather than being varnished to a high polish, floors are simply wax finished, making them extremely low maintenance.

To increase light penetration, Mark and Brian introduced a round skylight that is stretched out to an ellipse of twice its diameter where the north–south and east–west axes meet. This innovative shaping lets more sunlight pool into the south-easterly oriented family area. In the evenings, lighting is soft and downlight fixtures are kept to a minimum to reduce energy consumption.

“The clients are very easygoing. They didn’t want a stark showpiece of minimalist design, but a more practical and beautiful space to live in,” says Mark. With elegant restraint, he and Brian have delivered to Mies’s credo, with spaces that are graceful and utilitarian. 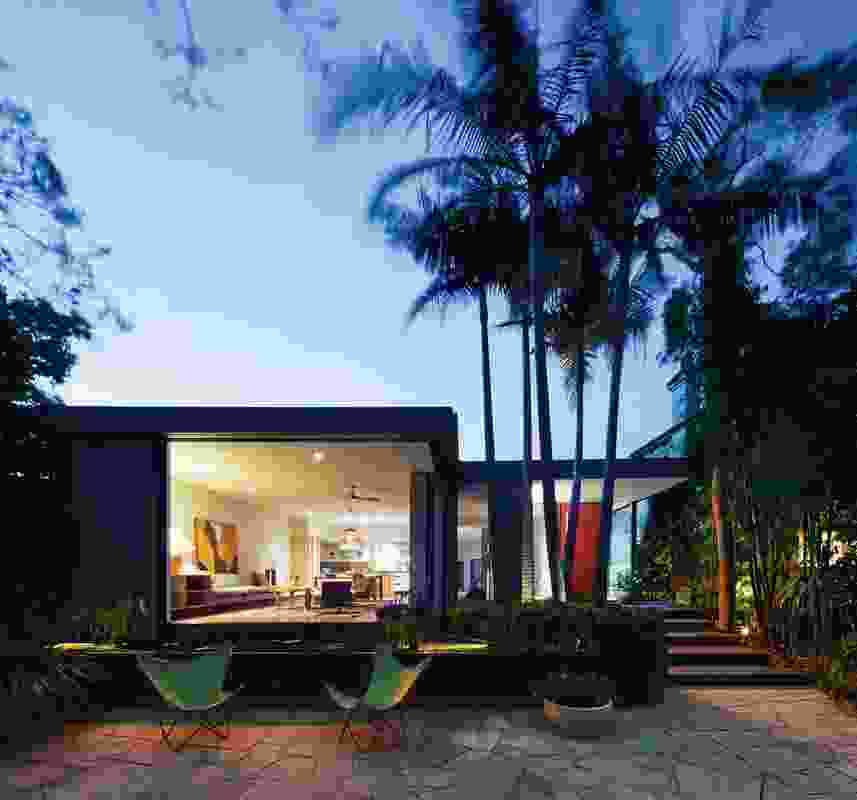 The design strikes an intentional visual balance between garden and residence. 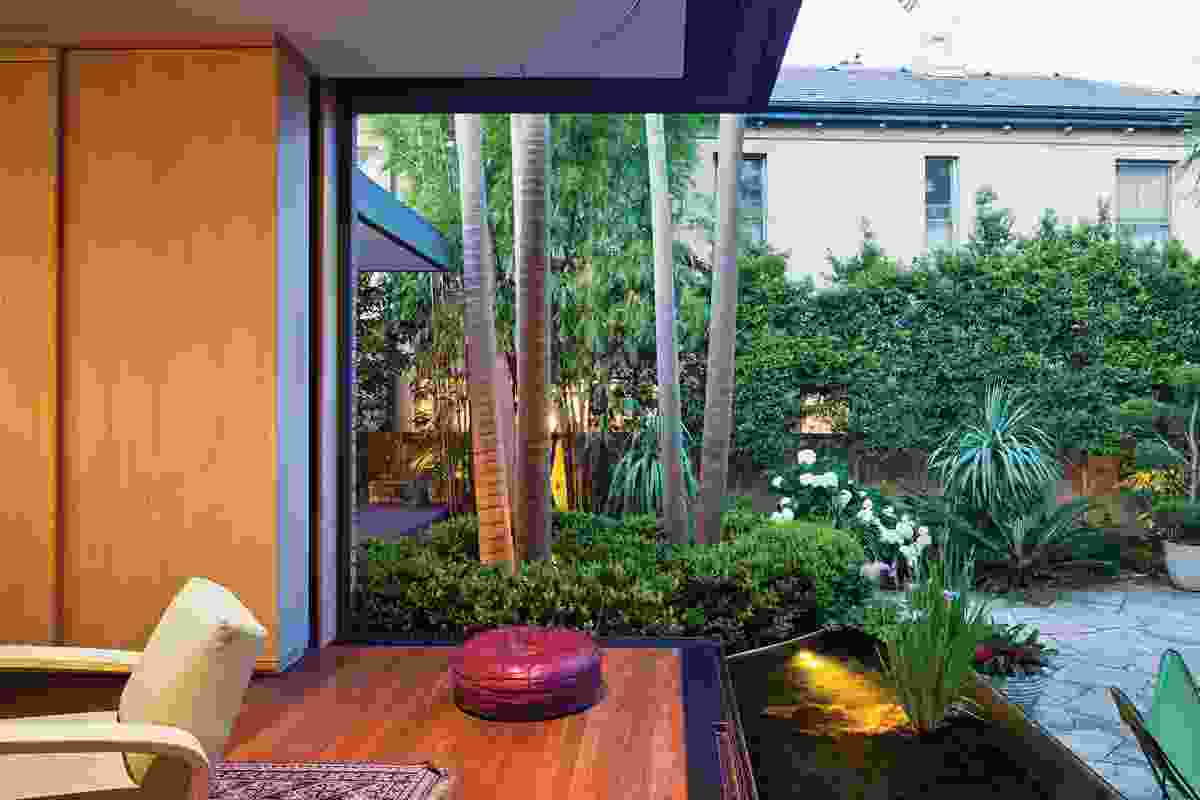 A watercourse serves as an intermediary plane; the water disappears under the family room floor. 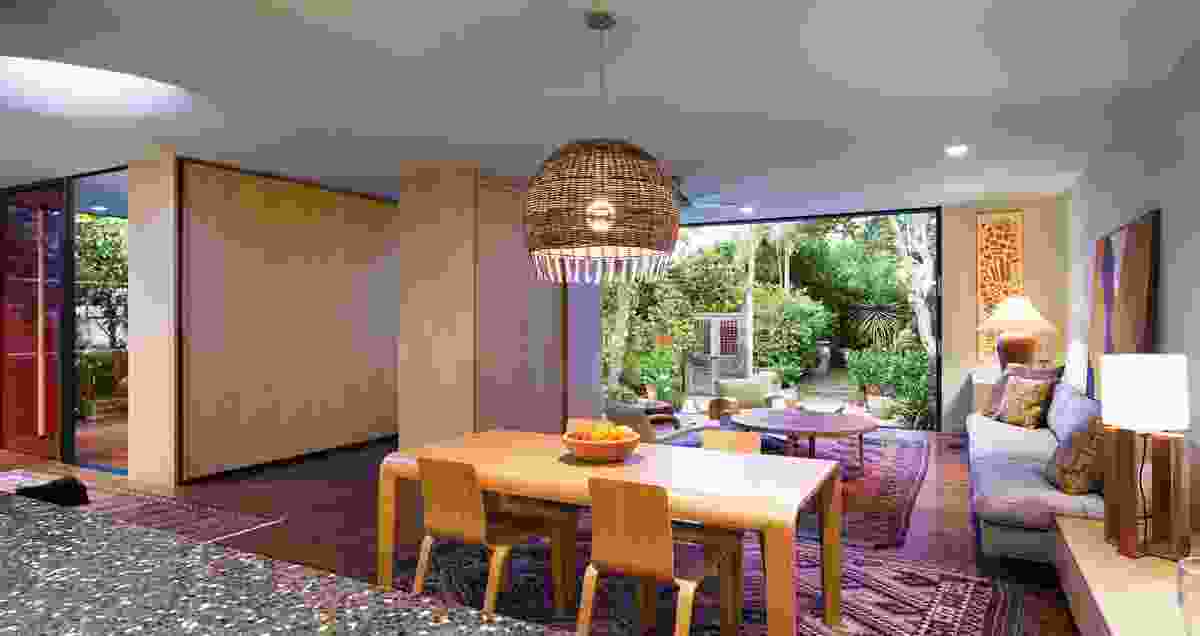 The architects’ solution to the original clutter includes an expanded breakfast/family area that opens onto the garden. 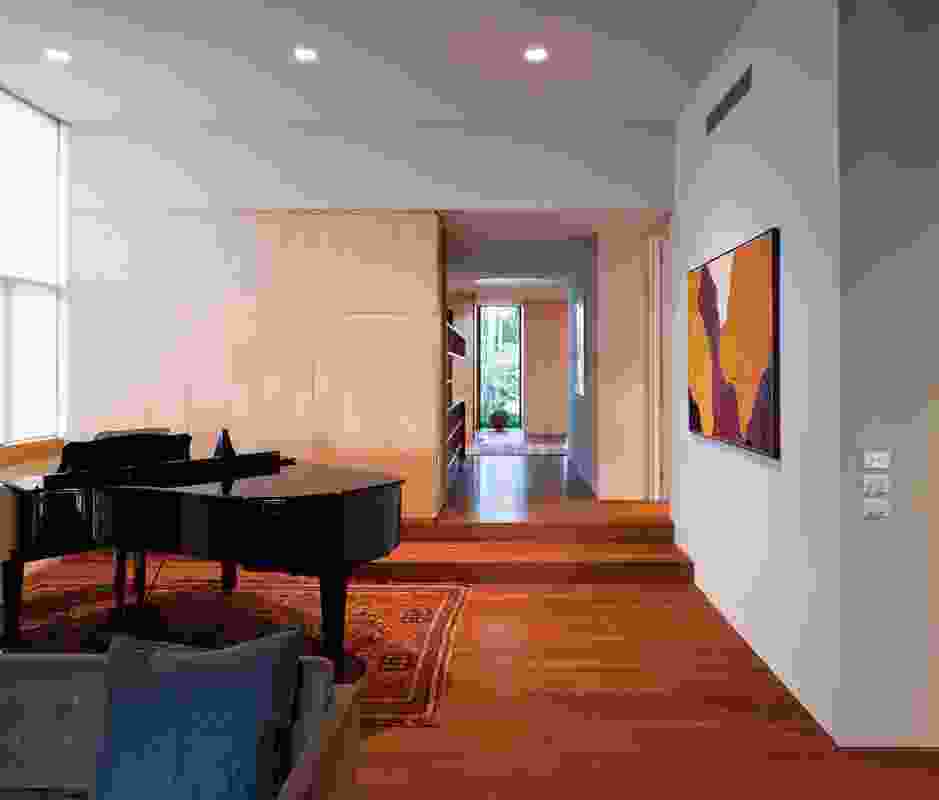 Timber floors were treated only with hand-ground pigments and stains made from organic matter such as walnut shells. Artwork: Freddie Tims. 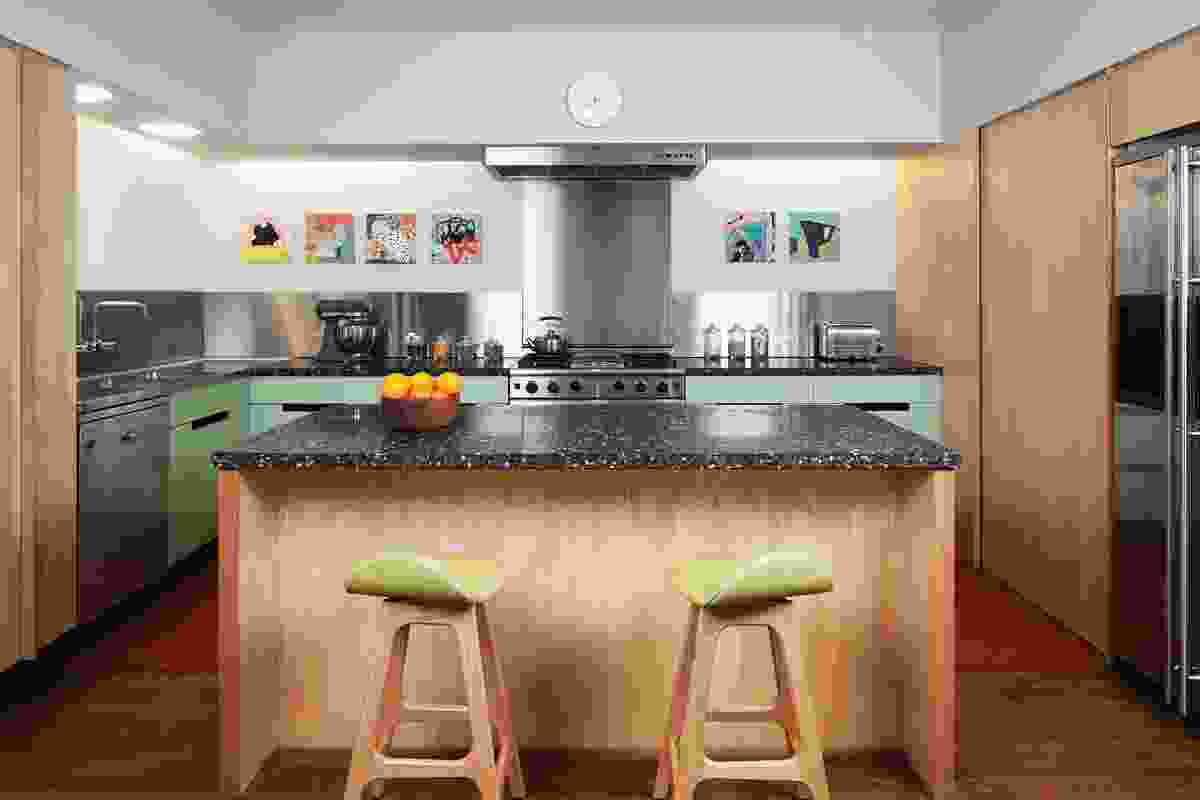 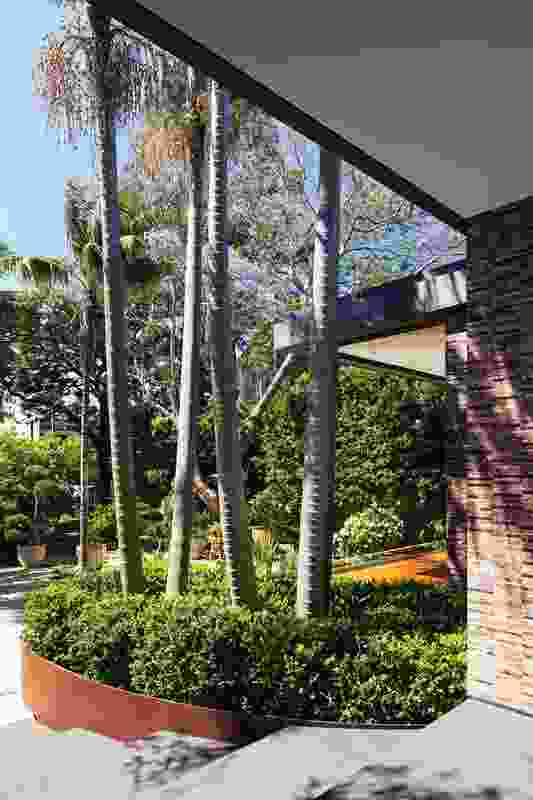 Tree trunks create a “very graphically vertical plane from the ground to the top of the canopy.”