The Glebe Town Hall is an item of state significance, situated on a prominent site on the corner of St. Johns Road and Vernon and Lodge Streets, Glebe. It forms an important landmark in the area for the local community. This building has aesthetic significance at a state level as a fine example of a largely intact building in the Victorian Free Classical style of architecture. Many of the building’s features are characteristic of this style and civic buildings of this period. Designed as one of the grand town halls of Sydney, with richly decorated interiors, and all of the modern facilities, the building is significant as a major component of the Glebe Conservation Area. The Glebe Town Hall has continued to provide a strong sense of place within the local community and to provide a centre for the social and cultural life of the area, and to function as a popular venue for entertainment, social events and fundraising functions. The building has social significance for its original association with the Glebe Municipal Council, and involvement with the government functions and development of the suburb of Glebe since the late nineteenth century. —From the NSW Environment & Heritage Statement of Significance.

In 2009, architects Tonkin Zulaikha Greer (TZG) was commissioned by the City of Sydney to breathe new life into the elaborate 1880s Glebe Town Hall. This grand old building was in urgent need of major conservation and maintenance work, and an upgrade to the access and services.

Designed by architect Ambrose Thornley Jnr in the Victorian Free Classical style, Glebe Town Hall was built in two stages: one in 1880 and the other in 1891. The building is solid brickwork, rendered and lined to resemble stone externally. The interior is solid plaster and the hall ceilings have lath and plaster coves and timber boarding of alternating pine and red cedar.

The guiding approach was to do as much as necessary to conserve the heritage building, with as little as possible change to the original materials. However, the advanced state of deterioration of some elements, and the nature of the original construction required some substantial changes. The building required a new slate roof and extensive reconstruction of the failing cement finials and parapets, as well as extensive repairs to the rendered facade decoration. The opportunity was taken to reinstate the missing cast metalwork on the clock tower and cresting to the ridge; this work was based on historic images.

The parapet is a series of linked circular elements originally reinforced by steel bands that had rusted badly and caused large chunks of masonry to be dislodged. The parapet had to be completely removed; it was replaced with precast reinforced concrete, with marine-grade stainless steel reinforcing. The new elements were assembled similarly to the original and pinned with stainless steel.

Rusted reinforcing had also caused the failure of the tops of the pinnacles and there were missing swags and flowers. These elements were carefully stabilized and missing decorations recast and reaffixed. Deterioration of the box gutters had allowed water into the brickwork, which had ferrous metal straps embedded in every fourth course.

Investigation revealed many layers of decoration were on the walls, over original polished plaster finishes. Sgraffito decoration was found on the pilasters, carved into white plaster to reveal the pink plaster underneath. The model for the pattern is likely to have come from the marble pilasters of the stairs of Santa Maria dei Miracoli in Venice.

There was extensive failure of the external paint and render. The original render was tested and the new mix formulated to match the original, maximizing compatibility. The exterior paint was removed using a stripping blanket, and the lines resembling stone exposed and matched in the new render. The paint removal allowed the use of mineral silicate paint, which bonds to the render but allows the walls to breathe. Its texture gives the impression of stone, recreating the feel of the original finish, which was likely to have been a coloured cement wash.

Internally, years of water penetration had resulted in damp walls that required desalination stabilization and refinishing, while much of the elaborate timber ceilings had been painted. Paint was removed from the decorative timber ceilings with soy gel and the timber French polished. Careful investigation revealed many layers of decoration were on the walls, over original polished plaster finishes: pink in the main hall. Some of the original internal wall finishes in the major spaces have been recreated. A sample was sent to Italy to have the marmorino matched exactly and reapplied in the main hall. Sgraffito decoration was found on the pilasters, carved into white plaster to reveal the pink plaster underneath. The model for the pattern is likely to have come from the marble pilasters of the stairs of Santa Maria dei Miracoli in Venice.

A collection of ad hoc additions at the rear has been enclosed in a void, creating a new lift and fire stair connections to the complex interior levels of the building. It also provides a new light-filled focus for circulation and improved access to the three grand halls. The new stair hall is detailed simply in concrete, timber, steel and glass, with an applied pattern on the glass to provide privacy for the adjoining house. The use of several species of plantation hardwood in the new work recalls the patterns of the original ceilings. The former natural ventilation system has been reinstated using new zinc roof ventilators, reopened ceiling and wall vents, and opening highlights, and enhanced with automated fans.

The TZG design improves access and meets the needs for code-compliant public use. Its scheme creates a new main entrance at the rear instead of extensive ramps to the formal front. The design concept derived from the original building plan with the continuation of the central lobby to the rear. The building’s three grand Victorian halls – one the original council chamber – have been fitted out for a range of professional and community events, including music, performance, exhibition and learning, with sound control, extensive new services, and a new commercial kitchen. An early childhood centre, administrative offices and small community meeting rooms, as well as craft studios and support facilities, complete the program.

Changes to the building and its significance will be interpreted in a public space exhibit in the Glebe Town Hall as well as in City Council records. This will include historical images and information about decoration and details discovered during the works and now concealed. 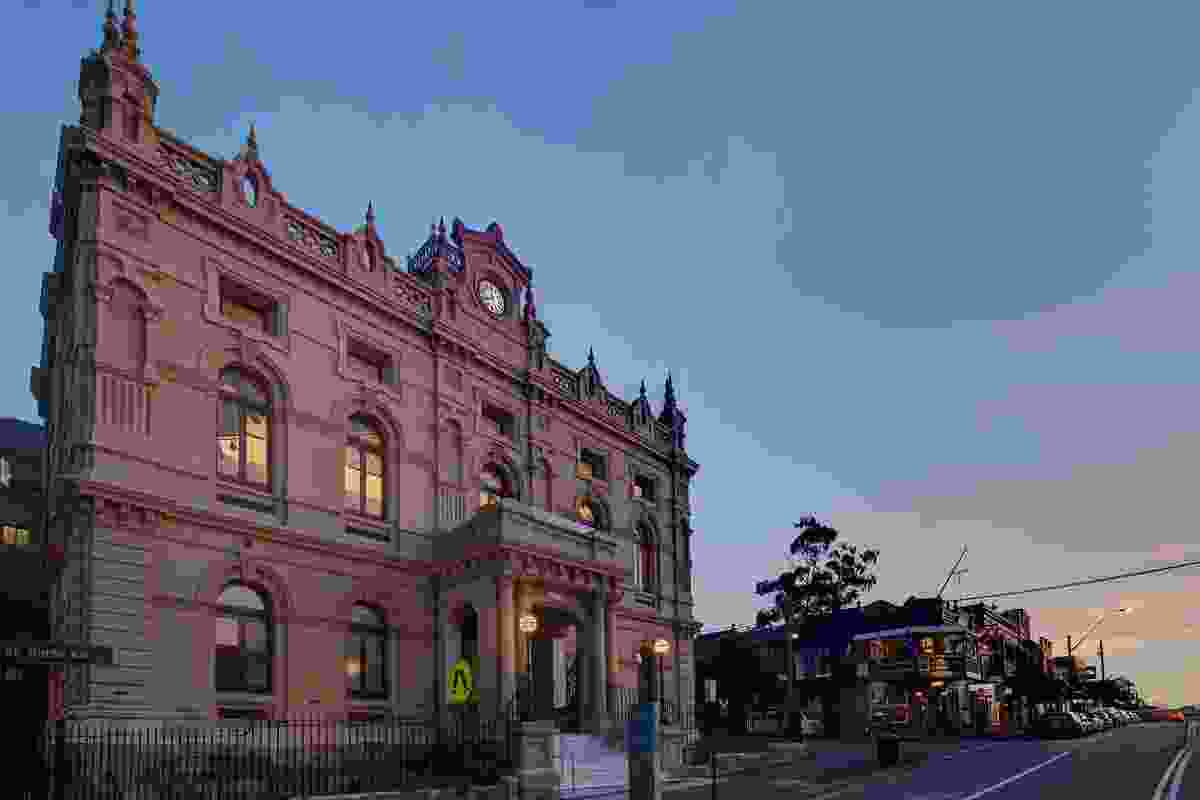 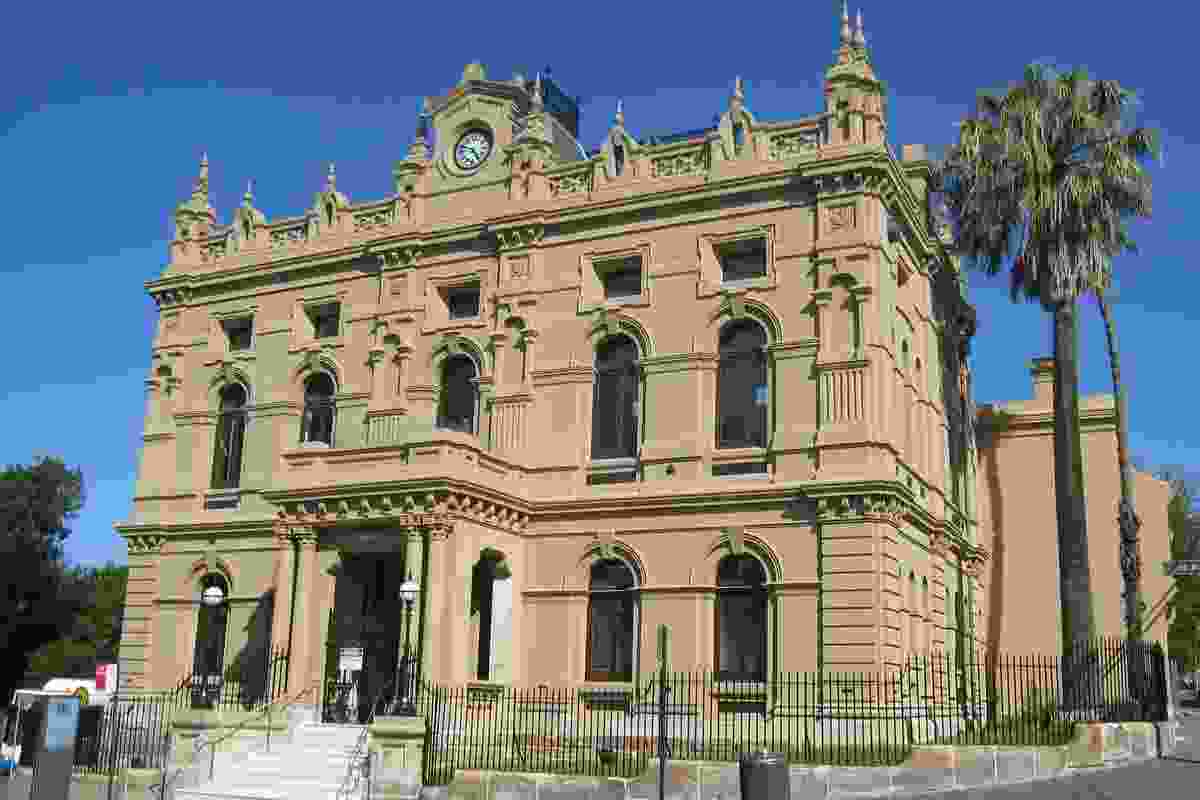 View of Glebe Town Hall, 2013, showing the restoration of cresting to the ridge and clock tower. 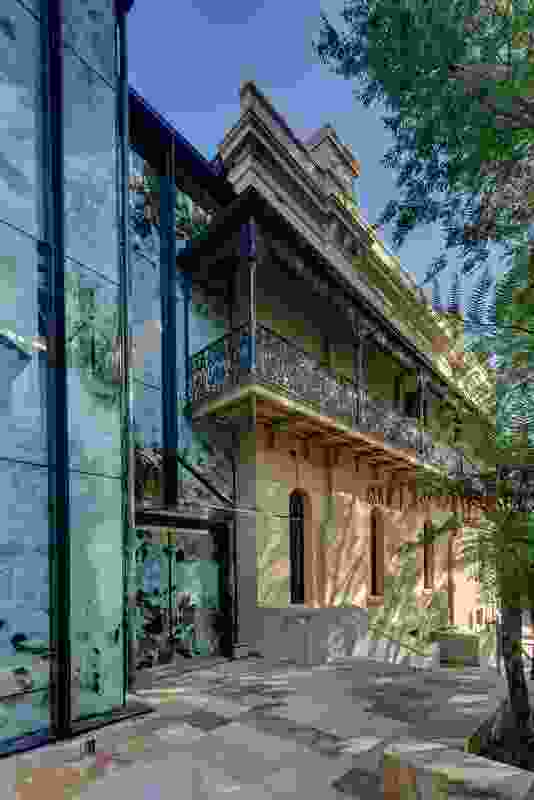 The glass addition by TZG improves circulation and amenities. 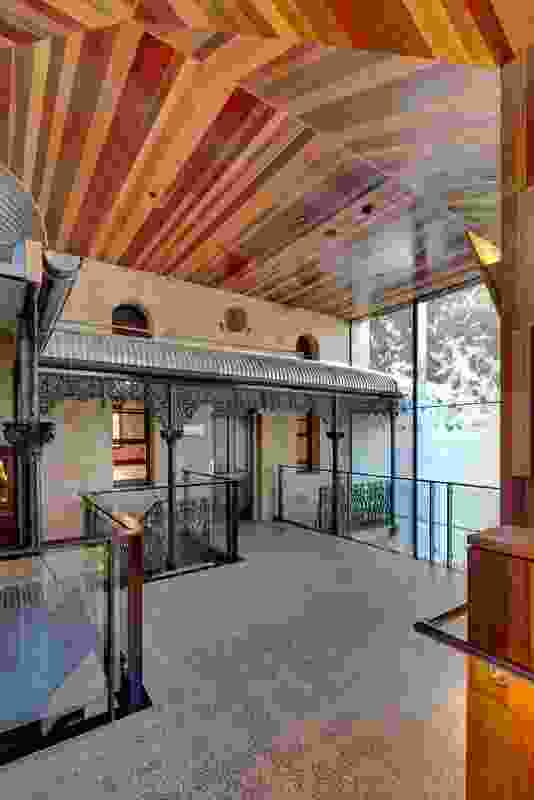 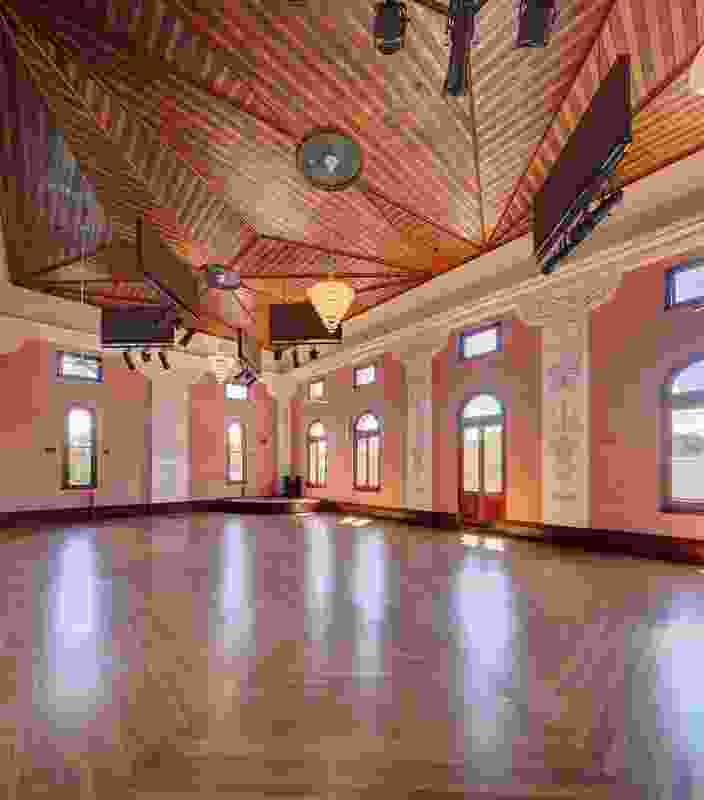 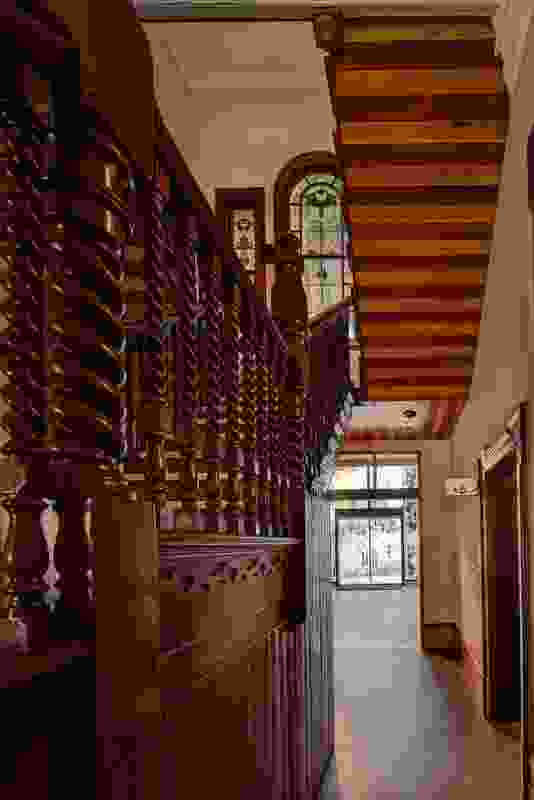 Restored timberwork of the original staircase. 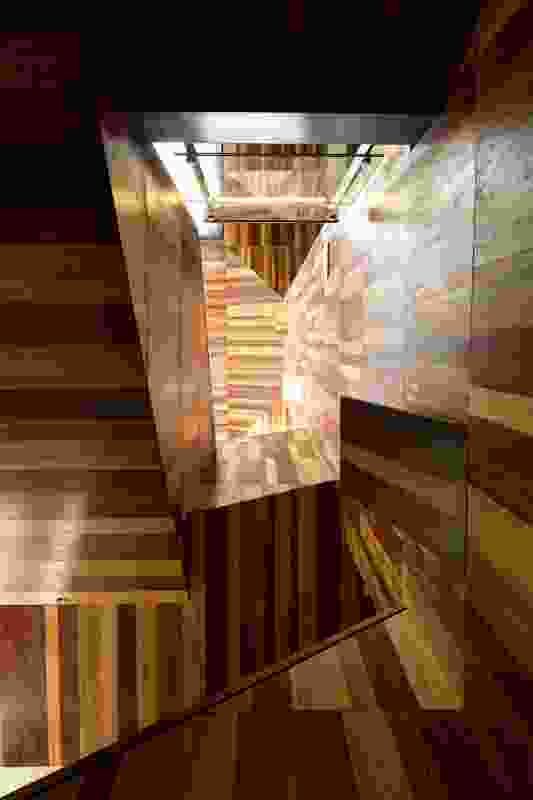 A blend of hardwoods in the new areas mimics the original ornate timber linings. 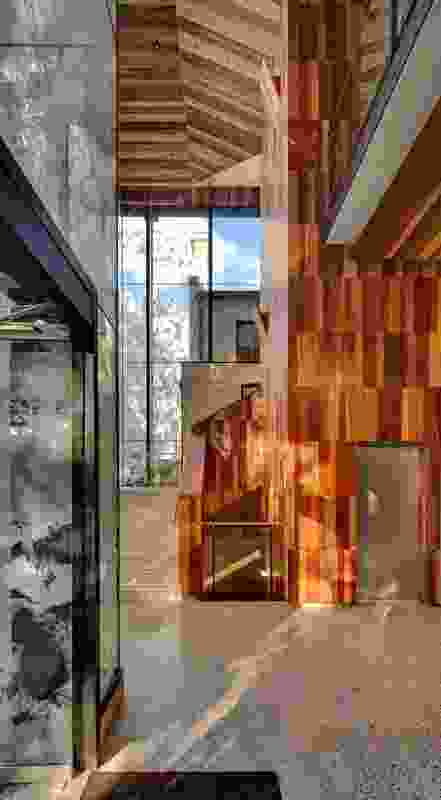 The new circulation and amenities area within a glass void. A blend of hardwoods mimics the original timber linings.

The new circulation and amenities area within a glass void. A blend of hardwoods mimics the original timber linings. 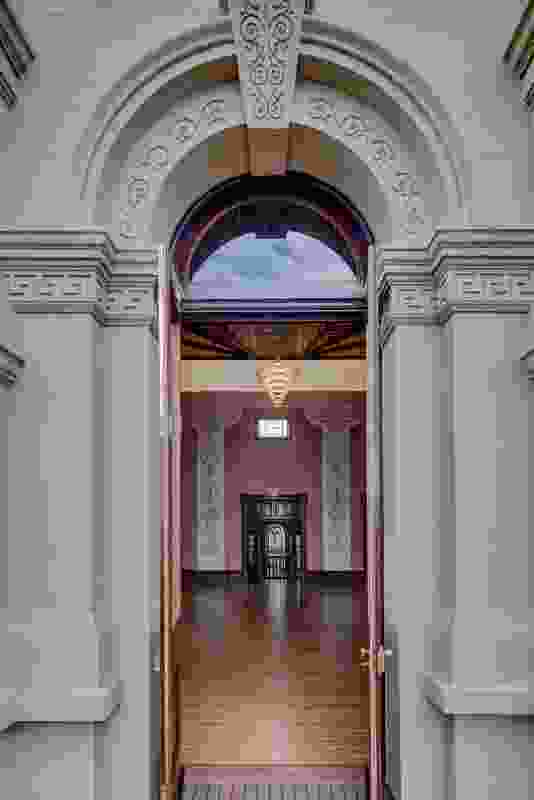 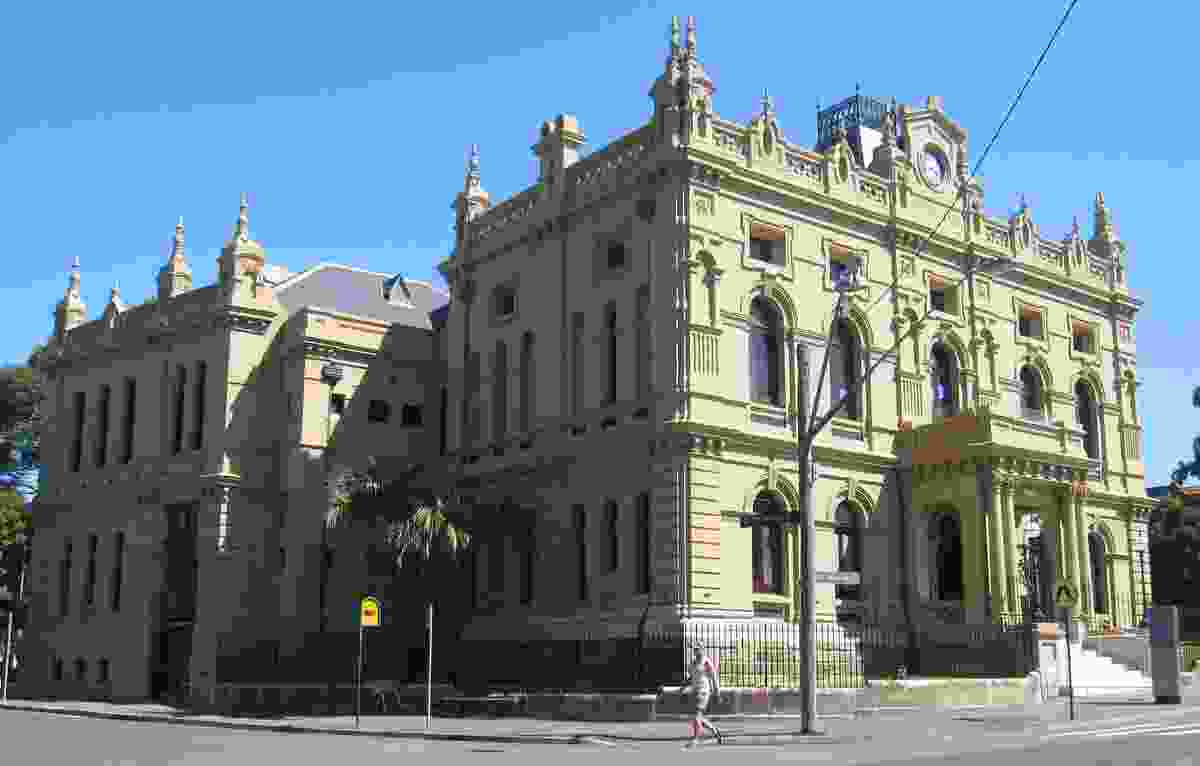 Glebe Town Hall in 2013, reopened to the community after extensive conservation work by Tonkin Zulaikha Greer. 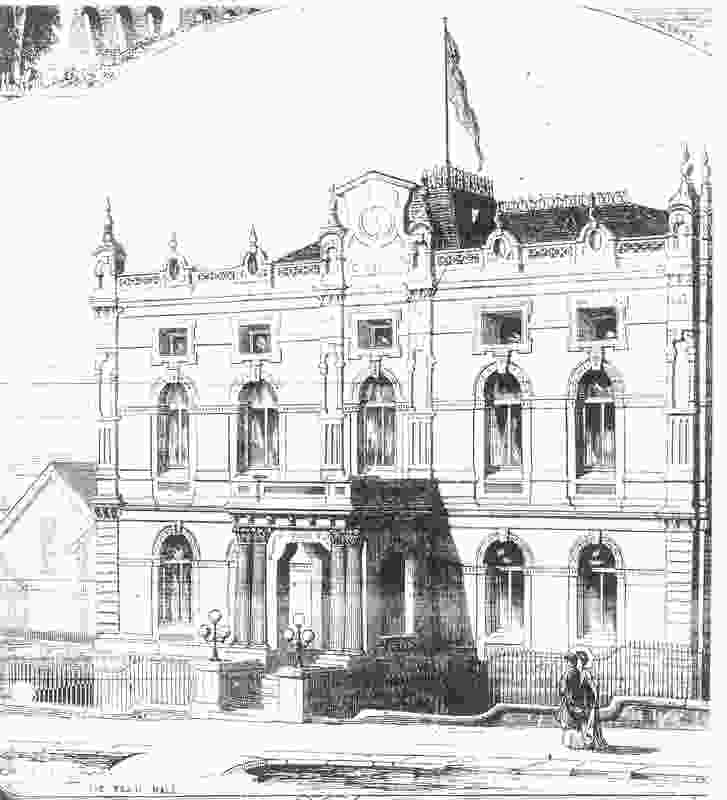 Sketch of the first stage of the Glebe Town Hall in the 1880s (from Town and Country Journal). This view shows the cresting on the clock tower and the ridge. 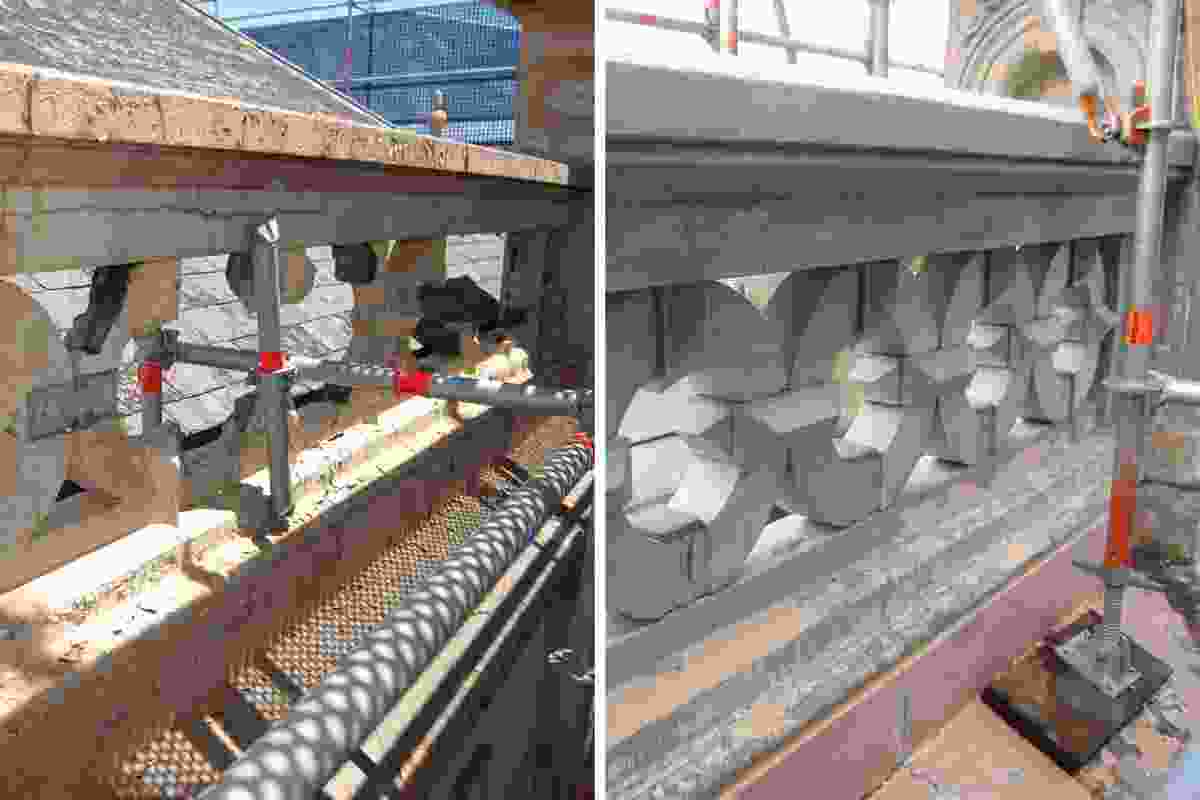 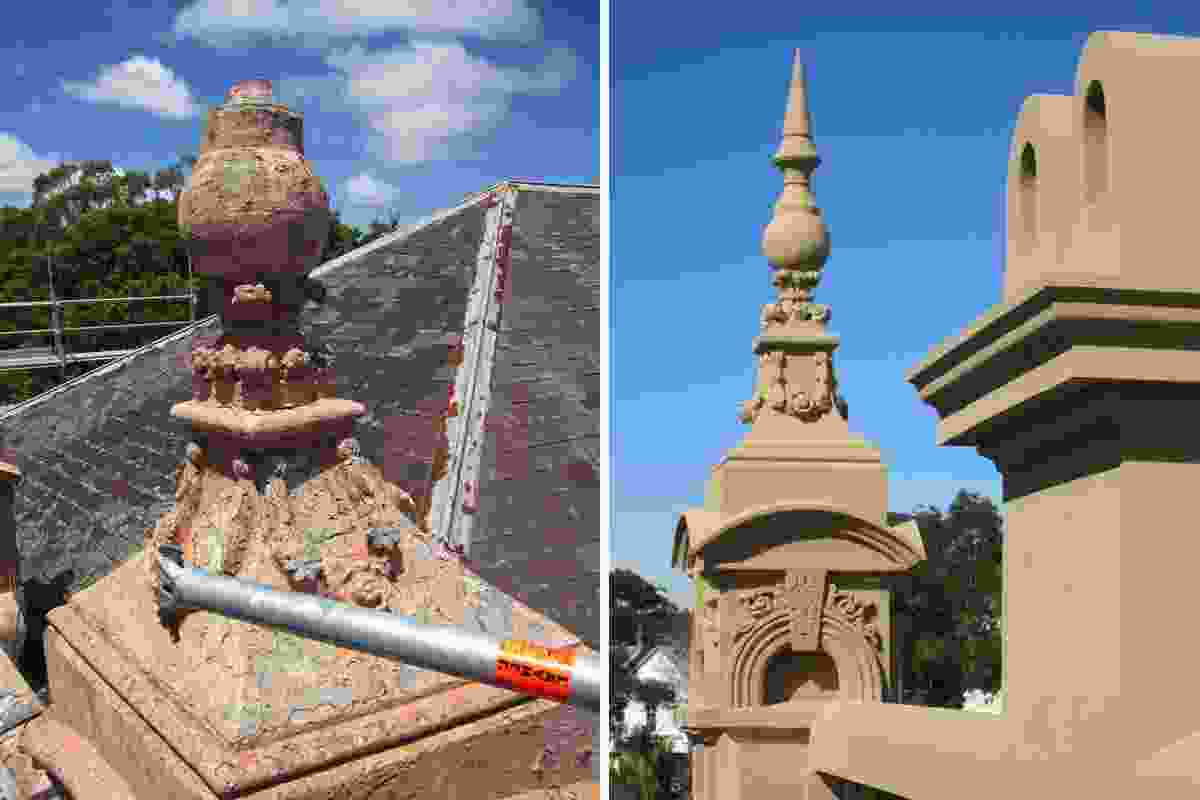 A pinnacle before (left) and after restoration (right). 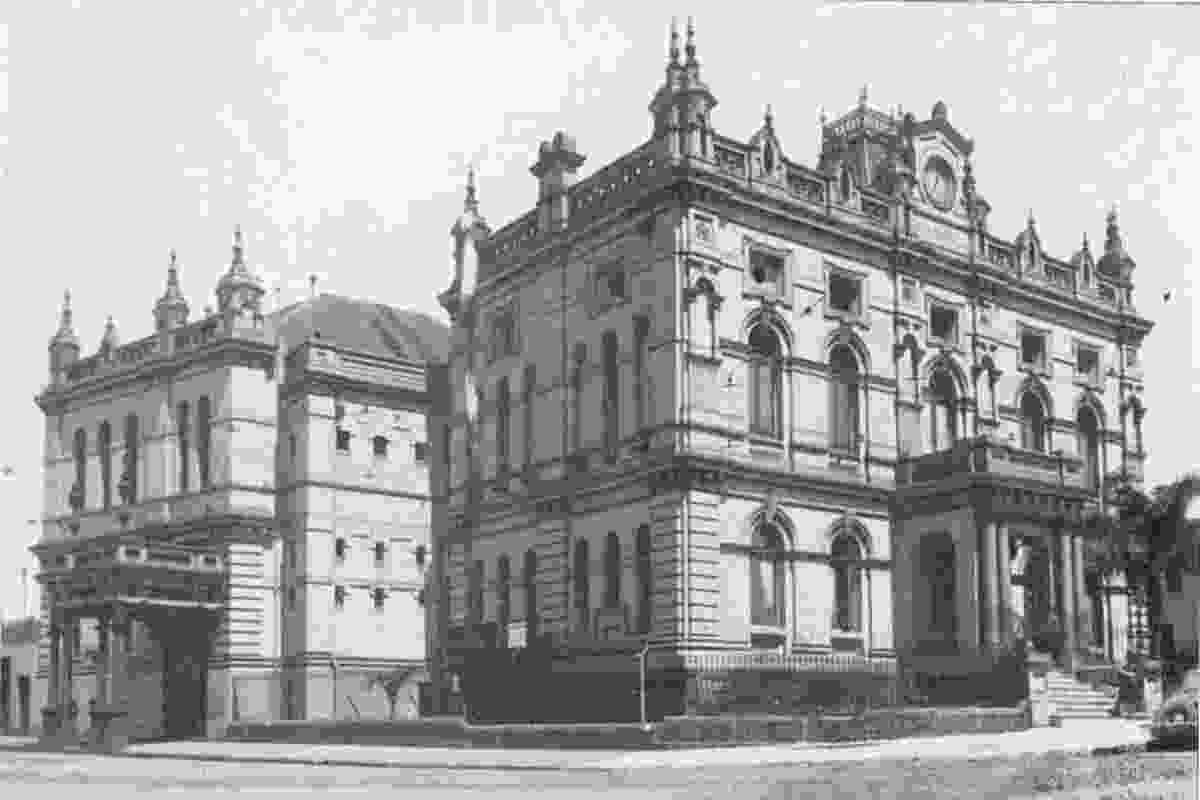 A 1935 view of Glebe town Hall showing portico to Mt Vernon Street, now demolished. A stone footing from this portico remains in the footpath.