Parklands by AAA (Arkhefield, ARM and Archipelago Architects) with Lat27 and Grocon.

The Australian Institute of Architects has announced a suite of fringe events to accompany the 2018 National Architecture Conference.

The events run from 4 to 8 June and complement the speakers at this year’s conference and the conference theme – Edge – which will consider Australia’s position both on the “edge” of Asia and the predominantly coastal character of Australian cities.

One of the first events on 6 June is a private tour of Bond University’s Indigenous art collection that will be followed by a panel discussion on how architects can meaningfully engage with Indigenous knowledge, culture and history.

The panelists so-far confirmed include Alayna Renata, a director of Mode, who is also of Māori (Ngāi Tahu and Ngāti Tūwharetoa) descent. She is currently conducting a PhD on the integration of indigenous values into landscape architecture. She will be joined by Carroll Go-Sam, a writer and researcher whose research interests span Aboriginal architecture, public architecture, housing and identity themes that draw on her own professional experiences in rural townships in Far North Queensland and the Northern Territory.

Later that day, delegates can embark on a behind-the-scenes tour of the Gold Coast’s sporting and recreation facilities, which were massively upgraded for the 2018 Commonwealth Games. Every stop on the tour will involve insights provided by the architects responsible for the projects.

On the schedule is the Parklands athlete’s village by AAA (Arkhefield, ARM and Archipelago Architects) with Lat27 and Grocon, the Gold Coast Sports and Leisure Centre by BVN and the KDV Golf and Tennis Academy by Shiro Architects.

See ArchitectureAU’s round up of new and significantly upgraded games facilities here.

Editorial director Cameron Bruhn will be joined various contributors for a lively panel discussion on the city’s architectural evolution in light of the conference and the Commonwealth Games.

Other fringe program highlights include two exclusive dinners with conference keynote speakers Moshe Safdie and Borja Ferrater, and cruise along the Gold Coast coast skippered by writer, former Queensland government architect and inaugural Gold Coast city architect Philip Follent, who is perhaps better placed than anyone to unpack the political and cultural forces that have shaped the “remarkable urban experiment” that is the Gold Coast.

For more information on these events, and the rest of the fringe program, go here. 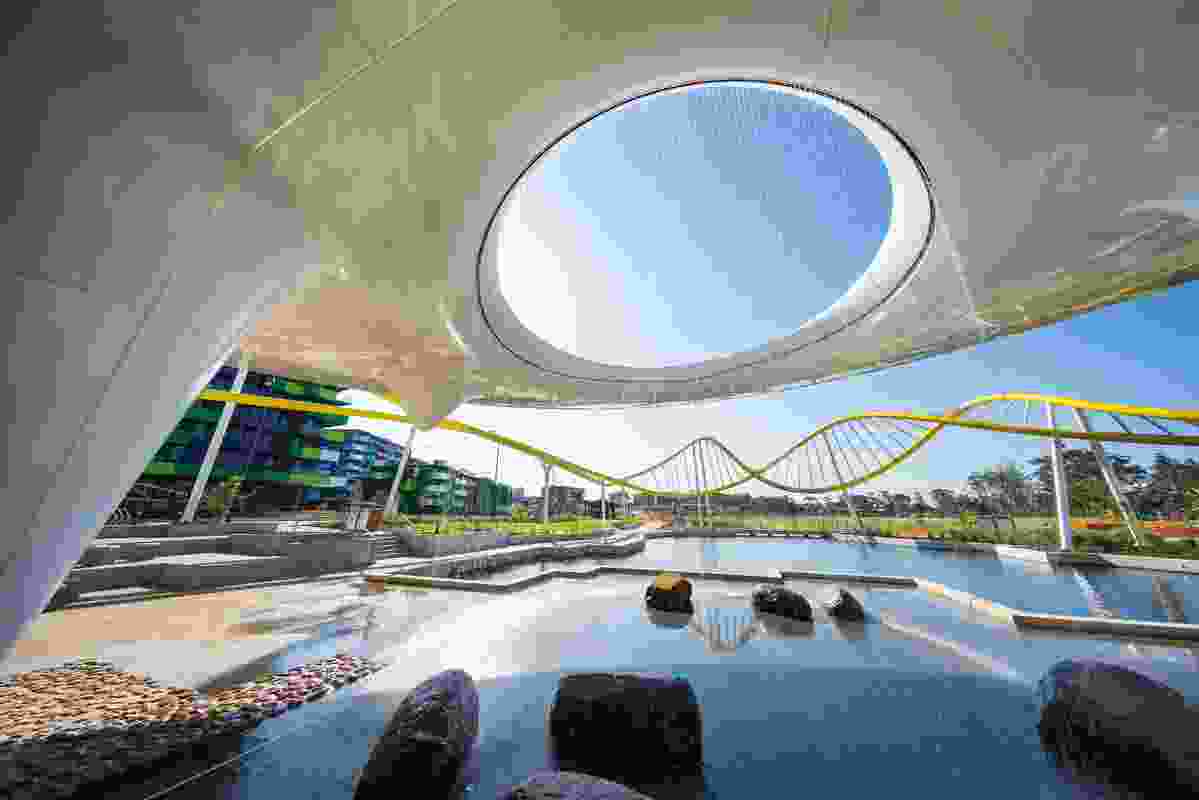 Parklands by AAA (Arkhefield, ARM and Archipelago Architects) with Lat27 and Grocon.