Gone to seed: Grasslands at the State Library of Victoria

An installation by artist Linda Tegg, horticulturist John Delpratt and landscape architect Anthony Magen attempts to recreate the pre-European settlement grasslands that once covered the site on which the State Library of Victoria now stands.

Sarah Hicks: How did the Grasslands project begin?

Linda Tegg: I wanted to know how the grasslands [on the site] could co-exist with the State Library of Victoria as it exists today. I had initially wanted to show the grassland in the library itself, within the Cowen Gallery, alongside the oil painting collection that depicts colonial history. I wanted to bring the plants that were barely represented within the library’s Pictures Collection into proximity to what is represented within the collection. There are three paintings from which you could possibly infer something about the pre-settlement plant community, which is very broad in terms of how people at that time were looking at the landscape.

SH: What are the three paintings you mention?

LT: There is the painting Melbourne Gaol in the Sunlight from the Public Library Grounds by Frederick McCubbin (1884), from which you could potentially decipher some of the grasses, but there are introduced species [also depicted] and one can sense that the landscape had already begun to change. The others are The Commandant’s House, Melbourne by Robert Russell (1883), and Melbourne in 1838 from the Yarra Yarra by Clarence Woodhouse (1889), which is a long view where you can see the structure of the Melbourne streets and you could make out where the library would be.

LT: When I went to the library to look at images, the collection said something to me about the tension between nature and culture, so I spent quite a lot of time looking through imagery of wildflowers around Melbourne and I wondered, could the plant itself co-exist with it’s image? Through that, I became curious about what grew on the library’s site prior to it being built, in a very specific sense, and found that within the Pictures Collection there wasn’t anything that described the landscape on a level that could enable you to recreate it. In not finding that image, I became quite curious and decided it was what I wanted to make. I wanted it to be live, and in proximity with the pictures collection, because this was a type of “blind spot” within the collection. I went about trying to discover what would have been on the site, exploring references, anecdotes and pre-settlement ecological vegetation classes (EVCs) and then started to speak with ecologists and natural historians.

SH: How did your collaboration with horticulturist John Delpratt and landscape architect Anthony Magen influence the outcome of your work? Did you have a preconceived vision for the work?

LT: I didn’t have a preconceived vision because I didn’t know what I was looking for; it became more a process of discovery. I accept that this landscape is an interpretation – it was a landscape in flux and no-one can say what was definitely there or wasn’t. Through the process I spent a lot of time looking at remnant grasslands at sites across Victoria, and I got to know more about how the plants were distributed and how they grow. I then spent a year growing the plants with John Delpratt, and so I got to know them that way.

SH: There is a particular “wildness” to the form of Grasslands – how did you develop this form?

LT: By the time I was developing this aspect of the project I had already been growing the grasses and I had started to really get to like them – I had spent many, many hours amongst them – and the logic that they had started to determine. I was wanting to operate outside the logic of the library forecourt, and for the grasslands to operate under a different set of conditions and not be dictated entirely by the forecourt as it stood, in that it was symmetrical and had perfect sight lines that responded in a very particular way to the architecture – I wanted to fracture it. This grassland traverses the lawn, the steps and the forecourt area. You can see clusters in which people can potentially form their own path through.

SH: Aesthetics is not usually considered in the pragmatics of re-vegetation projects. I think this work suggests the potentials of such collaborations, where through art there is an increased visibility in the public’s eye. Would you consider embarking on a permanent work?

LT: One recurring comment of passers by has been that this should become permanent. I find it really exciting that it’s instantly recognizable as something that should be preserved. I think that making a plant community – that can so easily be overlooked – more visible is very important, because it completely transforms the way people interact and respond to it.

Grasslands runs until 23 November 2014. The project is supported by the Georges Mora Foundation, the State Library of Victoria, the Australia Council, the City of Melbourne and the Melbourne School of Land and Environment, Melbourne University.

Gone to seed: Grasslands at the State Library of Victoria 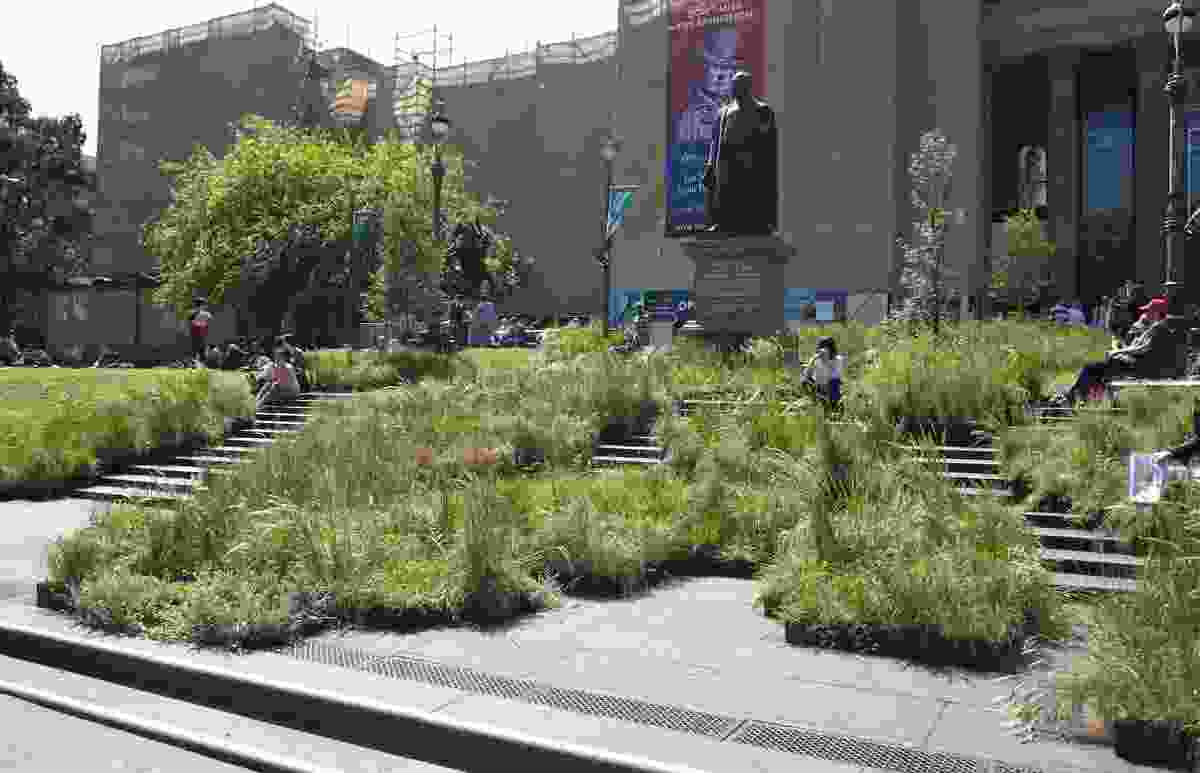 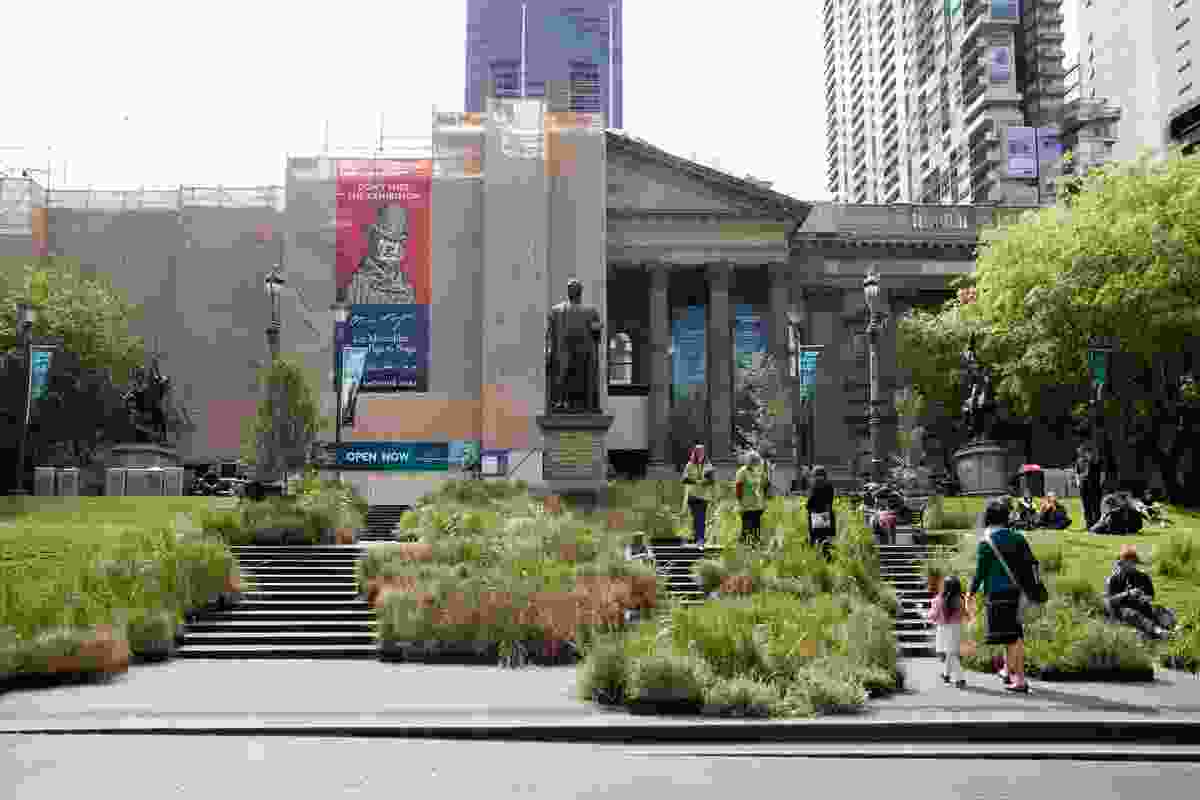 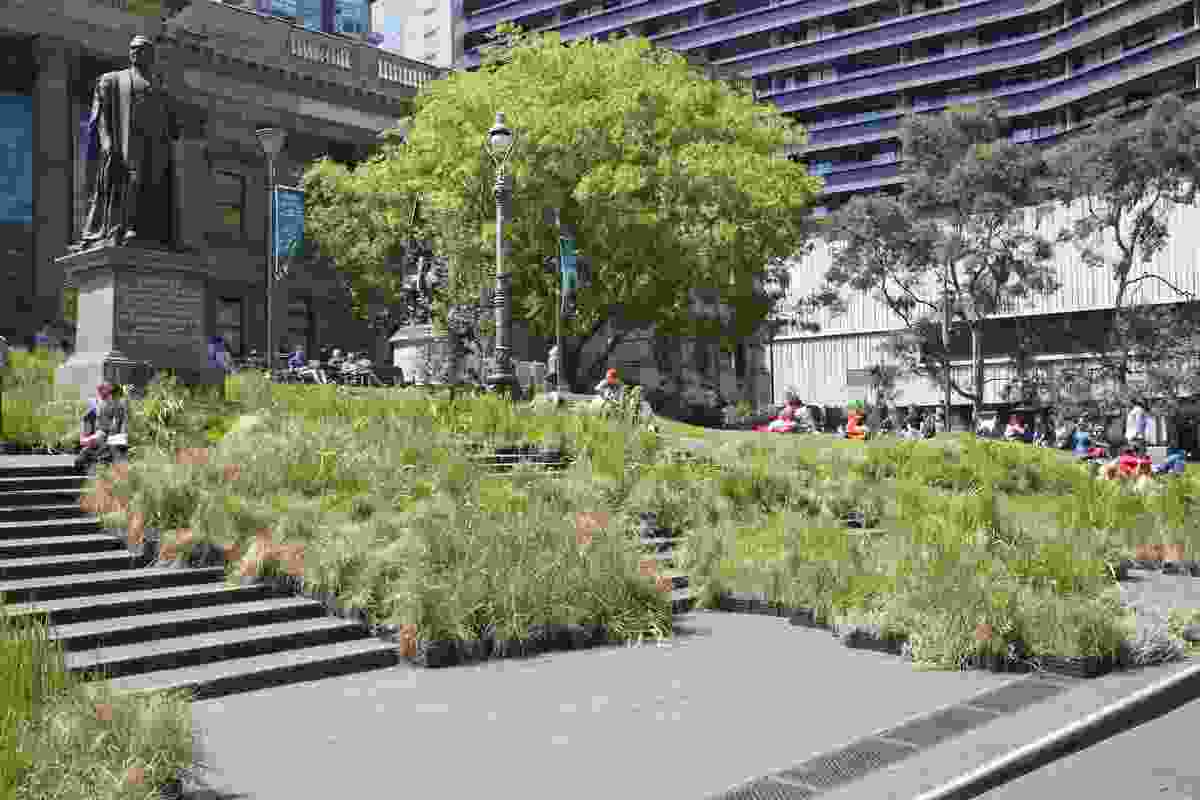