Ashton Raggatt McDougall’s new work at Building 22, RMIT, continues its exploration of the tension between ideas and materiality.

Adjacent to Storey Hall, Building 22 is a heritage-listed former Singer sewing machine building. Ideas have spread from one building to the other.

If ARM’s Storey Hall is Einstein’s cave and not Plato’s cave, this new extension to RMIT’s Building 22 is not the Garden of Eden, but rather a kind of hyperactive, hydroponic vegetable patch. With its knobbly green protrusions forming a canopy at ground level and then wrapping around the rooftop corner, this is a “cabbagy” type of architecture, a “growy,” lumpy thing whose swollen facade with its shiny emergent guise belies a tectonic material precision and a dogged intellectual inquiry.

At Storey Hall, ARM’s interests in mongrelism and in the blur – as an operation rather than what was being blurred – gave the architects mechanisms to draw in and deploy a whole series of ideas and imagery that included the Penrose tile and the latent histories of Melbourne and Storey Hall itself. This was architecture that resisted the purity of the quasi-religious investment in new mathematics, chaos theory and the possibility of an ideological resurrection of architecture. And now, fifteen years later, this extension to Storey Hall, with its certain approximations and acutely green facade, is an architecture of resistance too.

ARM’s work at Building 22, which to date has included the new canopy and major renovations to the ground floor and levels one to three, becomes literally and conceptually an extension of their 1995 Storey Hall work. At Storey Hall the brief was to put RMIT on the street and express imagery of RMIT as a late-twentieth-century institution, essentially a continuation of what Edmond and Corrigan began with the adjacent Building 8. And now, this prominent corner building – a heritage-listed old Singer sewing machine building from 1922 – with its civic prominence and adjacency to the State Library, the challenge remains to give vision to the contemporary university. While the ground floor of Building 22 holds administration services and facilities for RMIT international students and international development generally, level five is seen as an extension of the Storey Hall Annex and its conference facilities.

Known as the Green Brain, this new work includes approximately 500 square metres of flexible conference space glazed to the full exterior of the La Trobe and Swanston Street sides. Also included are kitchen facilities and a gallery/milling area that connects the spaces to the existing conference rooms in Storey Hall. Walls and ceiling are white, the ceiling coffered with the moulds from the fibreglass facade. Outside, a roof terrace accessed directly from the gallery/lobby extends to the very edge of the site with a sunken swimming pool-like terrace. Towards the city, views down La Trobe Street and across the State Library forecourt are partially framed (or veiled) by this draping green Penrose facade.

In 1995 ARM proposed to RMIT that it use this corner building as part of the Storey Hall work. The uni didn’t want to but required ARM to integrate services and a lift system into the Singer building. Various services and escape routes were therefore worked in between the boundary of the two buildings and stitched a somewhat “excruciating bond” between new and old. Architecturally, however, the idea was to deploy some of the ideas of Storey Hall into this Singer building – albeit in a modest way. It was the Penrose tile, cast in bronze – which, along with the green and purple cave entrance, defines the dominant Swanston Street elevation – that began their process. In particular they wanted to move on from the dominant interpretation of the Penrose tile as being a rigid singular object. While, as Howard Raggatt says, there are many things that are interesting about the Penrose tile, ARM was particularly taken with two.

Firstly, the efficiency of it – Roger Penrose reduced the number of tiles needed to create an infinite surface without repetition from twenty thousand to two. ARM liked the old-world simplicity of this and its potential for architecture. Secondly, they liked Penrose’s interest in the material possibilities of the tiling and his thoughts about a possible artificial intelligence or consciousness the tiles might possess. As a structure, Penrose tiling forms a quasicrystal with rare fivefold symmetry and without going into the precise mathematics of this phenomenon, it is enough to say that Penrose was particularly interested in the tile as a fully three-dimensional field, where, in order for the system not to collapse or to fail, the tile inherently needed a “consciousness” to predict the correct spatial orientation to accurately align the two fat and thin tiles. This relationship between matter – material – and something bigger than that was particularly interesting for ARM. “Our interest is in matter and materiality, which is the curse of architecture really, because we are just materialists, we are absolutely materialists … but the notion of consciousness within materials was a nice one.”

The intention, then, at Building 22 was to take the Penrose tile and give it that “field quality in a fully three-dimensional way.” Whereas at Storey Hall the tiles have an obvious and very rigorous fit, in this building the tiles are inflated – or “softened” – and become more lumpy, with “soft relationships” between elements. Although the building appears as a “blobby” emergent architecture, the software used for this process of softening was not strictly emergent and so the form becomes intentionally an approximation of the idea that resists any kind of purity or, more accurately, singularity of idea. These architects’ finesse with CAD/CAM technologies has resulted in each green fibreglass “panel” being precisely modelled and then finally made by boat and high-tech manufacturers.

As Raggatt recalls, “Their ability to work with us using three-dimensional models was seamless. Made and then “printed out” in pieces, conceptually these pieces are part of a continuous primordial figure, where each of those shapes is in no way replicated in the next. Each piece is a full print-out of a variable but continuous surface or field.” The architecture’s openness, perhaps like Umberto Eco’s “The Open Work,” results in a kind of dynamic field of meanings. “Pure emergent technology is not really interested in ideas in architecture; it is another one of those purities and we’re not that interested in purification.”

The overt greenness is another gentle provocation. Raggatt says, “The building plays with green things while resisting the imagery of technology, although of course it is a high-tech product and achieves all of RMIT’s criteria for environmental performance.” This tension between ideas and form raises this firm’s longstanding but, he says, “tragic” pursuit of an idea-full architecture. In reality, “We don’t actually do any ideas, because ideas are not objects, and yet we like to think there is some way of signifying or pursuing ideas. Many architects have got over ideas – and I don’t mean that in a good way – and are quite satisfied with materials. Perhaps we like to delude ourselves, or wish or hope that such a thing is possible. Maybe this is the slightly tragic hope that architecture clings to … or maybe materiality is architecture’s best quality and ideas are in fact corrosive to architecture. Many architects don’t even actually like ideas and probably think – I tend to think rightly – that buildings can’t hold ideas. The fact that I try to make them do it is another matter! But ultimately, I think buildings resist ideas. We work as hard as we possibly can to make buildings that can sustain ideas, while at the same time we probably believe that they can’t.” Certainly ARM conceives of buildings as being brutally pragmatic. So while the ideas might be “extreme,” the workability is also high.

Without doubt this building, like Storey Hall, will stir up the troops. Raggatt recalls that fifteen years earlier, Jean Nouvel refused to go into Storey Hall, even though he was meant to judge the carpet, but Charles Jencks, who loved it, wrote it up in his The Architecture of the Jumping Universe. “Jencks was very keen on our version of the Penrose tile and wondered how it could be extended into some kind of new vision for the city – a whole new extended facade.” Raggatt admits, “We didn’t have the opportunity to deploy that, but this little fragment is another example of how cabbagy architecture could rule the world! Perhaps, and whether it results in a flurry of local conniptions, remains to be seen. However, I do love the way the Griffins’ fantastical crystals have escaped the Capitol Theatre down the road and, like a creeper, have found themselves wrapped over and re-formed on Storey Hall and now re-formed again as this Green Brain of Building 22. It’s one corny reading anyhow, or perhaps it’s just RMIT trying to join the Ivy League.” Either way, Raggatt likes corny things. “They can be quite profound,” he says. “We try not to entirely resist the corny … or even the sentimental.” 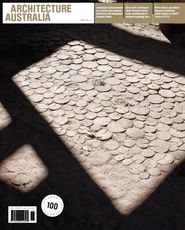 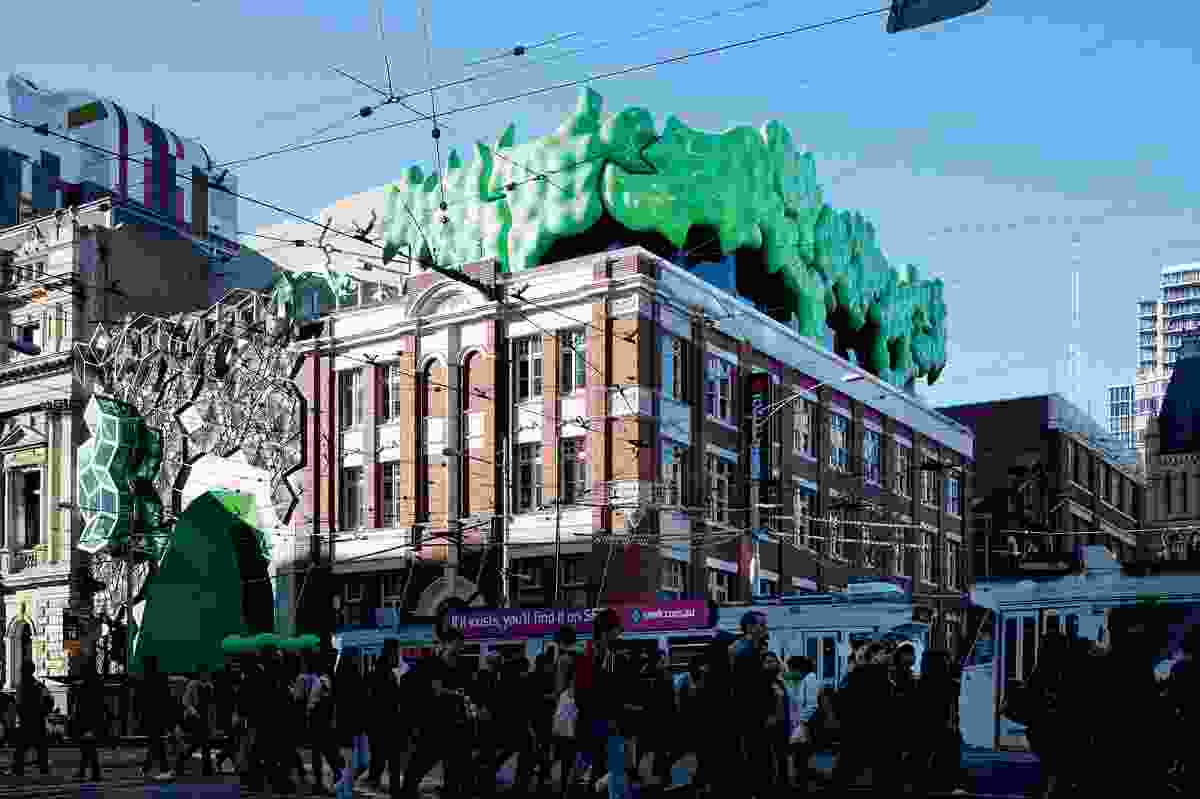 Adjacent to Storey Hall, Building 22 is a heritage-listed former Singer sewing machine building. Ideas have spread from one building to the other. 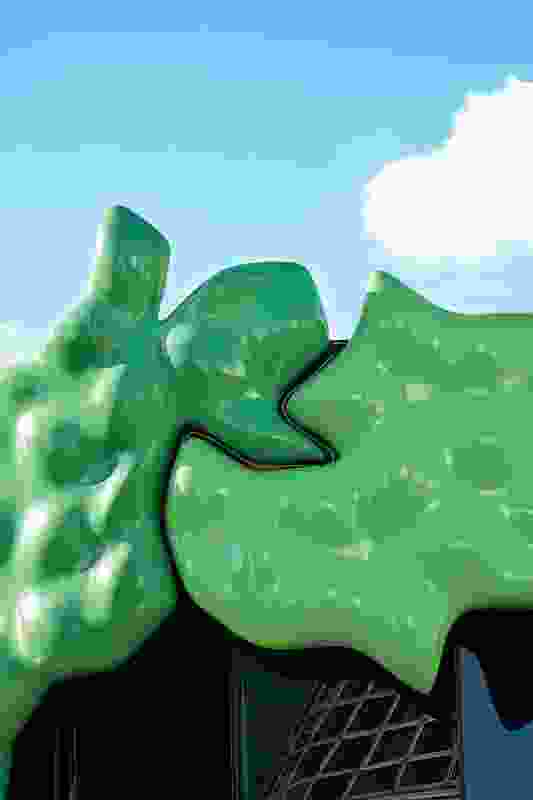 Detail of ARM’s “inflated, softened and wrapped” Penrose tiling on the canopy of RMIT’s Building 22. 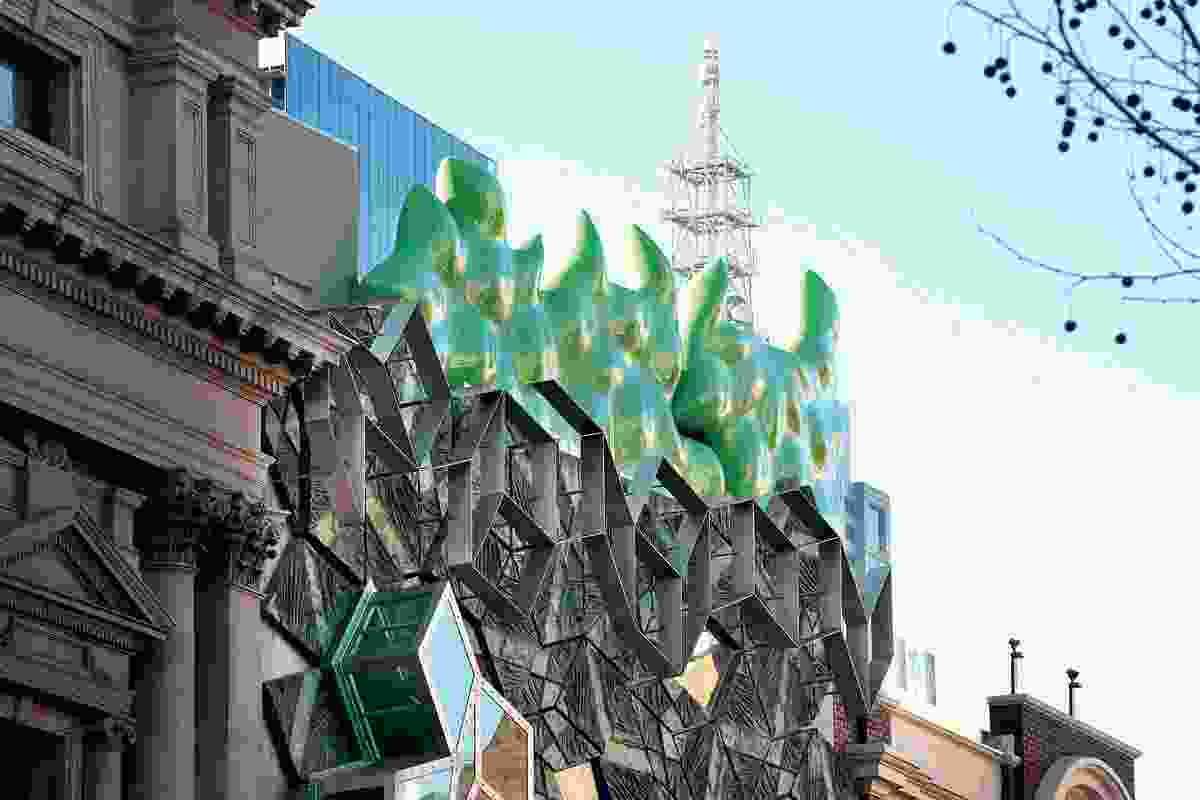 There is an obvious distinction between the more rigid Penrose tiles of Storey Hall and the “cabbagy” forms of the new work. 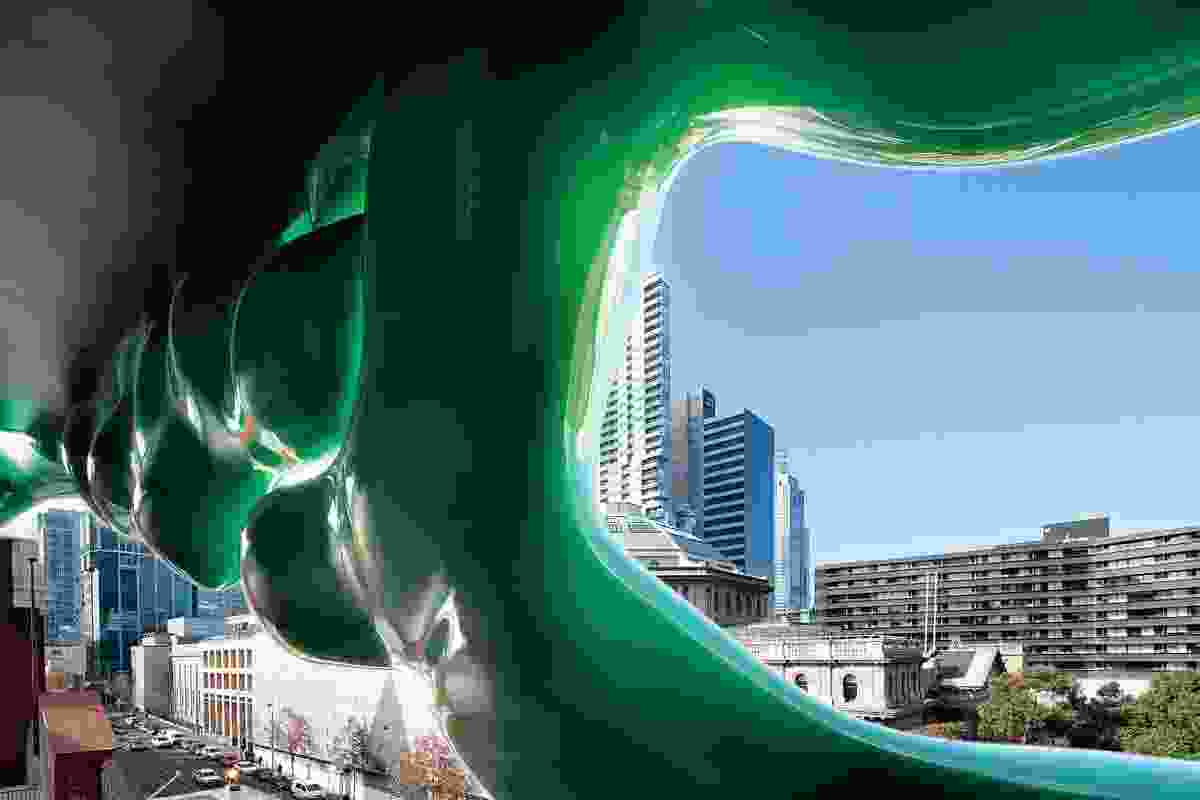 Looking down La Trobe Street from within the “Green Brain.” 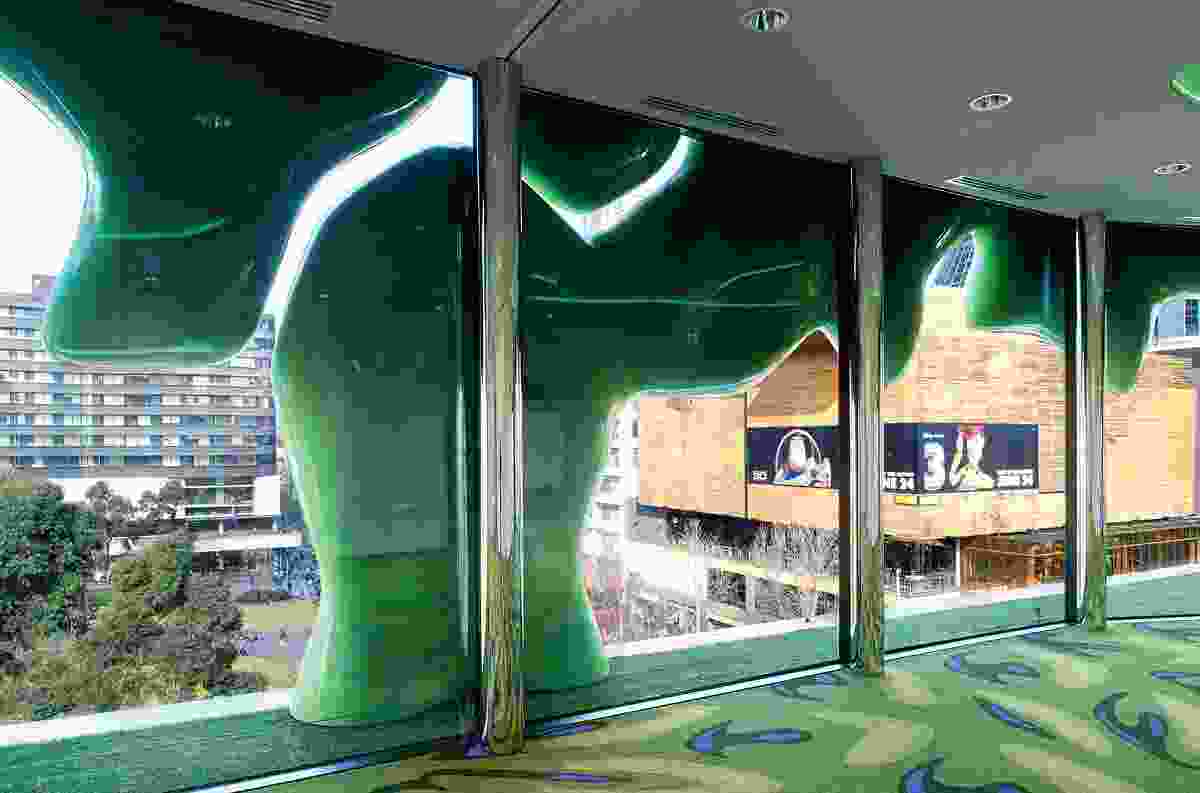 Looking down Swanston Street, with the State Library forecourt on the left and Melbourne Central on the right.