Developer Beulah International has announced the winner of its international competition to design a more than $2 billion mixed-use tower in Melbourne’s Southbank.

The winning proposal comprises a two-tower design with a twisting form featuring balconies and terraces nestled in the curves of the facade.

The development is slated for a site on the corner of Southbank Boulevard and City Road.

UN Studio and Cox Architecture’s proposal is conceived as an extension of Southbank Boulevard, which the City of Melbourne is currently converting into a linear park. The proposal draws the green space, and by extension the nearby Royal Botanic Gardens, into the tower’s public spaces at various levels and up terraces on its twisted facade.

Juror and Victorian government architect Jill Garner, said the twisting form will be “an elegant addition to the skyline” and will “provide a spectacle and promote an illusion of slenderness.”

“The vertical village idea has a series of relationships and a grain that is beyond its architectural response – it taps into important social issues including ideas associated with the future of home / work / play.”

The taller tower will be entirely residential and reach a height of 356.2 metres, with a “publicly accessible” garden at the top.

The shorter tower will be home to a hotel and commercial space and top out at 252.2 metres.

The proposal is yet to be submitted for planning assessment, but if approved, it stands to be Australia’s tallest building, surpassing the Gold Coast’s Q1 tower, which reaches 322.5 metres, including the spire.

At the ground level, a pedestrian connection will draw visitors into the podium through a retail and entertainment precinct to a public space called “The Garden.”

Rowe said the design team’s approach stemmed from identifying a gap in the public amenities of the sometimes-maligned Southbank precinct.

“I was walking around [the area] with the planning minister a couple of months ago and he’d said ‘we’ve failed.’ From an architects point of view – and are custodians of the cities – we should be looking to come up with solutions and improve it,” said Rowe.

“The way we have designed [the proposal] was to ask how do we animate, activate and create public spaces that are of neighbourhood quality and that people can desire and feel comfortable within.”

He continues, “The history of Southbank is maybe a retail ground level and then a car park podium and we saw no future in that.

“We needed to reclaim this space and create a very active hub in someway – a social and neighbourhood hub for Southbank.

“Great cities are built around great public spaces – and our engagement with that is the starting point of how we created the ground plane and the podium.”

Rowe said the public realm of the proposal was inspired by the Centre Georges Pompidou in Paris, designed by Renzo Piano and Richard Rogers. “Centre Pompidou has a very active edge, which means it activates the public space adjacent to it. In some way that’s what we’re proposing here. “We have what we’re calling a town hall space, which is a function centre and a centre for art and exhibition. So the movement systems on the perimeter of the building are not unlike that of the Centre Pompidou to create activity into what is exhibition space, retail space and public activity spaces.

“Although this is not an exhibition building per se, it has a lot of exhibition spaces within it.”

The proposal was the only one of the six shortlisted to divide the development into two freestanding towers. “We thought a single mass on that site would reduced the permeability and it was too must of an imposition into the Southbank precinct,” Rowe explained. “The fineness of twin towers, because it created permeability to the sky, far improved the visual nature of the mass.

“The second thing was, if we put a developer hat on, [the arrangement] allows for stage-ability and build-ability: two towers with independent uses can be built at different times.”

Both UN Studio and Cox Architecture have described the project as a process of co-creation. “We think co-creation is the future of design and architecture,” Rowe said. “We would talk about what the issues were within Southbank – the lack of amenity, engagement with street edges, permeability – and the importance of great streets and laneways in Melbourne. We worked collaboratively in a way that we would model the building envelops and we would workshop them twice a week.”

Beulah International executive director Adelene Teh said, “it was clear that the creative outcome was distilled out of an incredible amount of collaboration between the allied team members.

“The winning scheme has shown a bold yet thoroughly considered approach to create a context-driven landmark as an addition to Melbourne’s skyline.

“At the macro scale, the building’s silhouette provided a new, site-responsive elegant visual beacon in the precinct.

“In its fine grain, the scheme displays a strong intent for well-considered public and private amenity and at street level, the proposal displays volumetric qualities that will truly transform the public realm by eroding the hard edges that is prevalent in Southbank.”

Philip Rowe said, “This is not just another project in the skyline for the city of Melbourne.

“Every city in the world is tackling the issue of population growth. This is a proposition to say what do new developments need to be like to assess the idea of increased population but improve the quality of neighbourhoods and vertical living.” 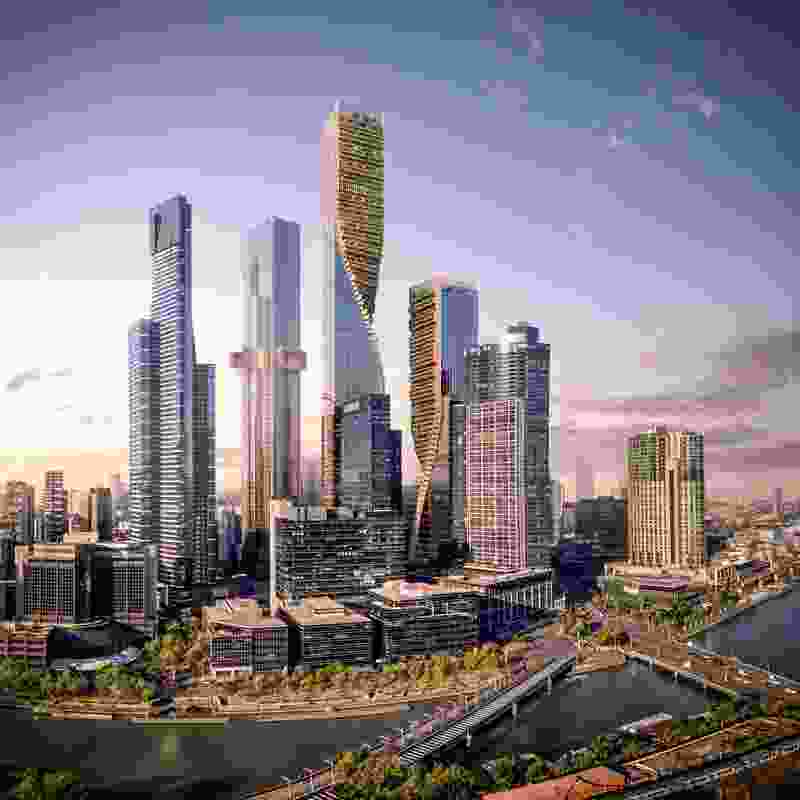 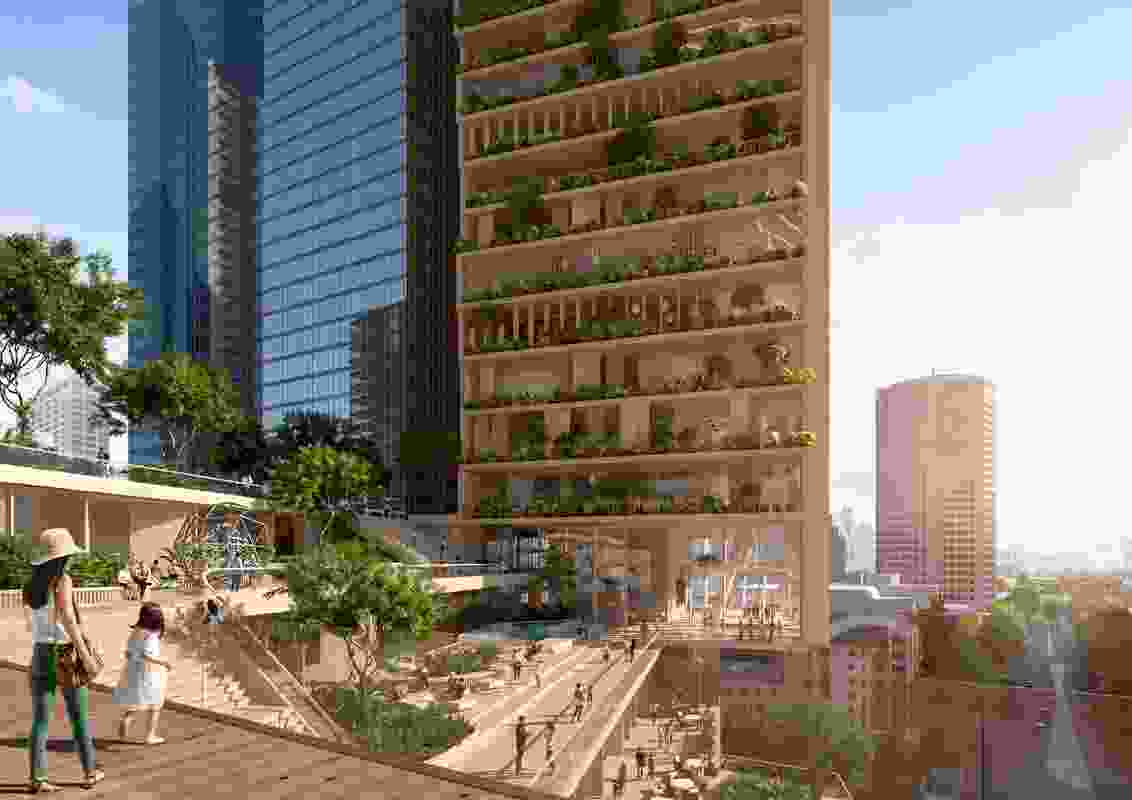 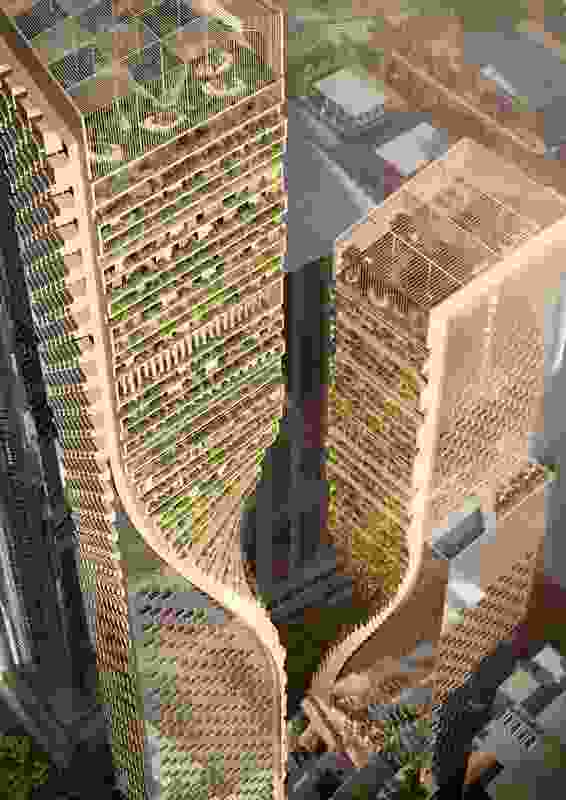 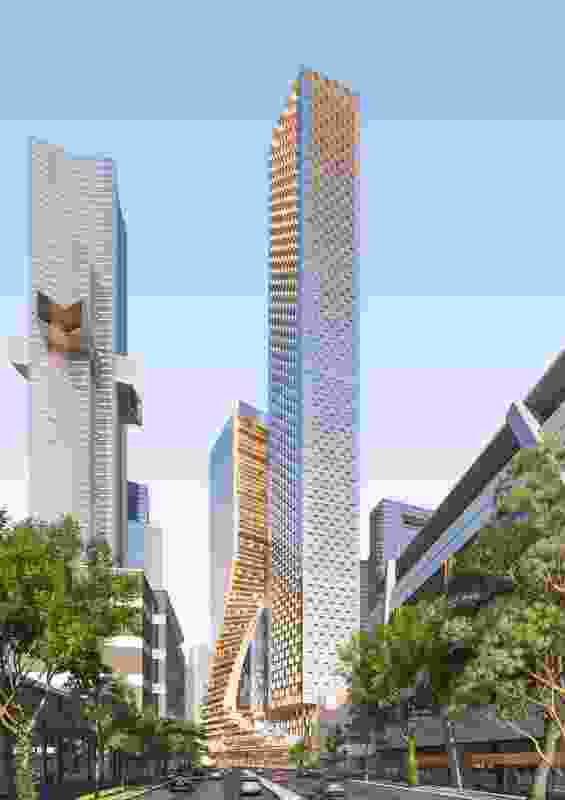 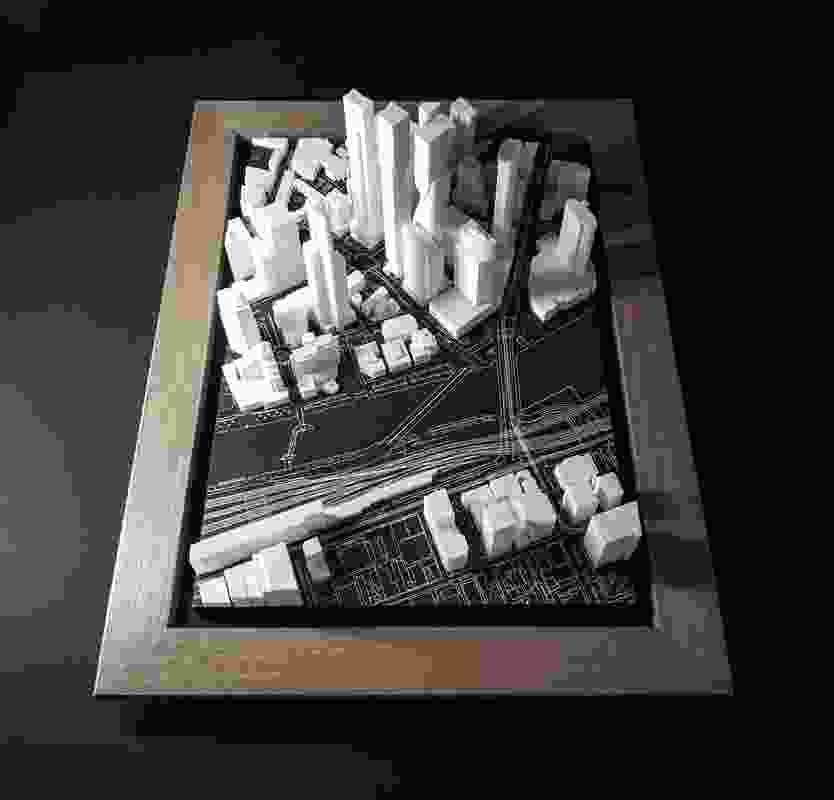 A model of the proposal and Southbank precinct by UN Studio and Cox Architecture. 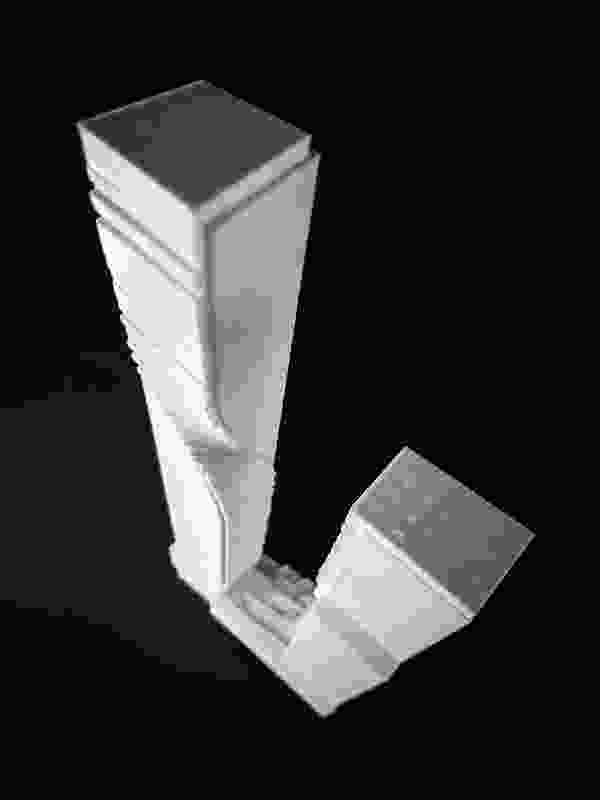 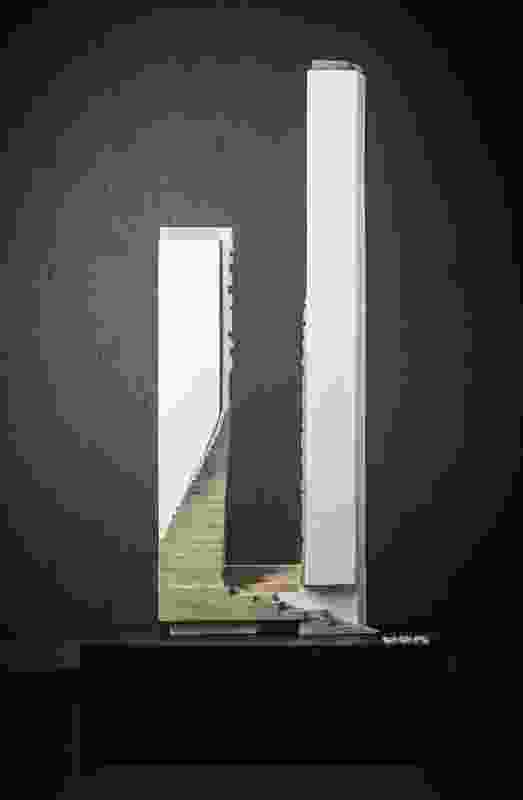 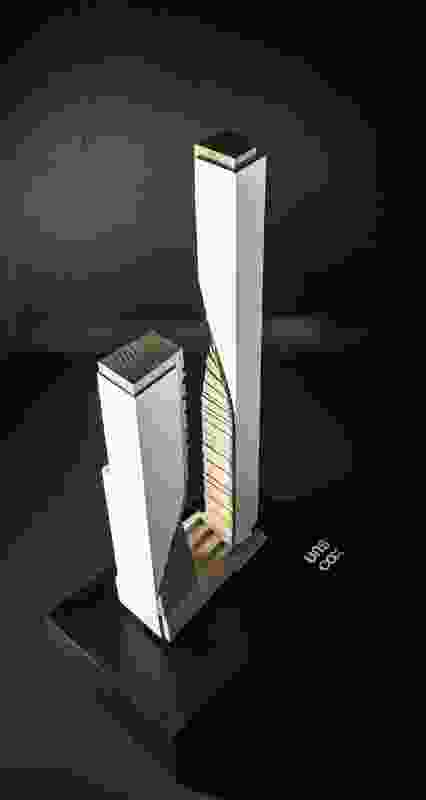 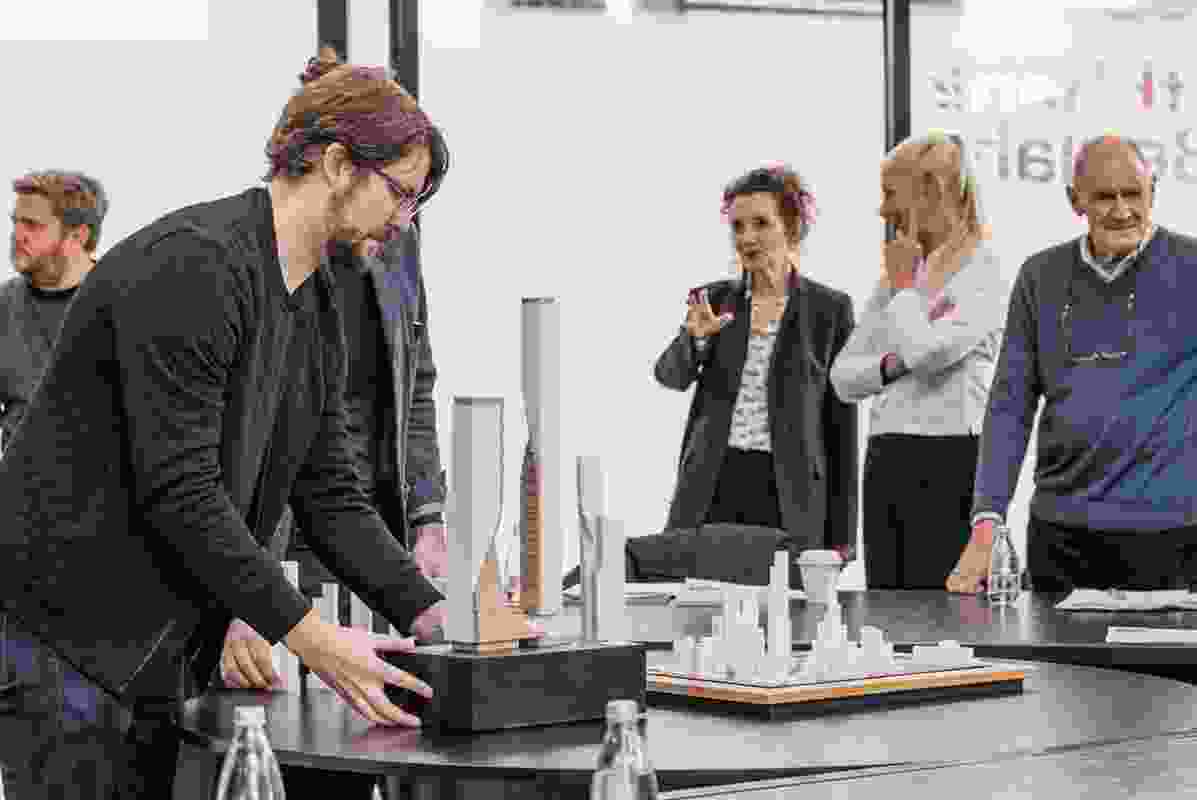 UN Studio and Cox Architecture presenting to the jury.