In a tribute to the great Australian ceramic artist, who died in London in July 2013, we revisit this review of her 2005 retrospective exhibition at the NGV, from the archives of Artichoke, simply titled: ‘Frozen moments in silence.’

In an anteroom to the survey exhibition Hanssen Pigott juxtaposed her pots with works from the NGV’s influential Kent Collection of Chinese and Korean ceramics. This collection fascinated Hanssen Pigott as an undergraduate arts student, majoring in fine art and English literature, at the University of Melbourne in the early 1950s.

The unrealized ambition to be an architect transcends her oeuvre. As a schoolgirl Hanssen Pigott demonstrated an affinity with both art and mathematics and might easily have pursued the profession. In doing so she would likely have received encouragement from her father, the joint-director of a large engineering firm in Ballarat, who expected his daughters to go to university and take up professions. The streaming of schooling at this time, however, saw her in the wrong stream – art rather than science.

In 1955 Hanssen Pigott began a rigorous three-year apprenticeship with the potter Ivan McMeekin – the founder of the Sturt Pottery in Mittagong. This was the genesis of her career as a potter. Hanssen Pigott left Australia in 1958 for the UK. She worked with Bernard Leach, Ray Finch, Alan Caiger-Smith and Michael Cardew while abroad and set up potteries for herself in urban London and rural France. She returned to Australia 1973. In 1975 she established a studio at Linden Rise in Tasmania. Periods at the Jam Factory in Adelaide and the Kelvin Grove campus of what is now the Queensland University of Technology followed. In 1989 she established her own pottery workshop in the isolation of Netherdale near Mackay. Hanssen Pigott settled in South-East Queensland in 2000.

In the late 1980s Hanssen Pigott began arranging her translucent porcelain pots in still lifes. In these arrangements Hanssen Pigott nods in admiration to the still life paintings of Ben Nicholson and Giorgio Morandi. At the same time she started showing her work in the context of other minimalist art. This included exhibitions at the Garry Anderson Gallery in Sydney. The critical gaze began considering her work within a minimalist frame. The function of the pots was not lost. We may divest the objects within the still lifes of their use value but for the potter their usefulness is latent, imperative and deeply profound.

Hanssen Pigott is reflexive about the evolution of her work. In the 1997 essay “Truth in Form” she mused, “But, strange, I no longer care if the cup, with its careful handle, and balanced weight (the heritage of years of tea set making) stands unused among a quiet group of table-top objects arranged as a still life, somewhere higher than table height. It is still a cup – an everyday object as ordinary and simple as can be but from somewhere (because of its tense or tenuous relationship with other simple, recognized, even banal objects) pleasure comes.”

The pots within the still lifes sometimes assume anthropomorphic qualities. Some of the titles are discreet metaphors of humanity – Procession (1995), Exodus II (1996), Blue Travellers (2002), At the Gate (2005).

The pots within the still lifes sometimes assume anthropomorphic qualities. Some of the titles are discreet metaphors of humanity – Procession (1995), Exodus II (1996), Blue Travellers (2002), At the Gate (2005). One of the first things Hanssen Pigott did on arrival in London in 1958 was join an anti-nuclear march. There are some of her humanitarian concerns in these mature works – an awareness of the sadness of displacement.

In others there are moments with friends and lovers – Silence (1995), Chord (2004), The Listeners (1998) – or a record of a particular time or place in her life – Waiting (1998), Leaving Bologna (2002). Breath (2000) might be Hanssen Pigott’s own sigh. The titles of others are simply descriptive and enumerative: Still Life with Two Cups (1994), Still Life with Two Tall Beakers (1994), leaving the viewer space to project themselves into the arrangement. In some of the assemblies there is a homogeneity of form; in others the forms jostle for attention.

There is also something in all the arrangements that suggests a humanist reading of the work. Hanssen Pigott literally projects herself into the work, imbuing her pots with the power of her body over the restlessness of the raw material. She creates works of silent intensity by ordering function with metaphor. Imagine each of the pots to be a person or a building and the relationship between them is amplified. The negative space within the arrangements is empowered. If they are people we empathize; buildings, we make an urban reading. We see the delicate tension that holds the arrangements in place – that the composition is greater than the sum of its parts. In context each still life arrangement is animated by the subtleties of light – be it daylight or our reflections. There is something in all of this that suggests Hanssen Pigott would have made a good architect.

On the opening night of the NGV International survey exhibition a much humbled Hanssen Pigott gracefully accepted the recognition of peers, colleagues and friends. Upstairs in the main gallery space a small crowd gathered in formations that somehow resembled the works – humanity arranged in space, frozen in moments of silence, enthralled by the beauty of the everyday. 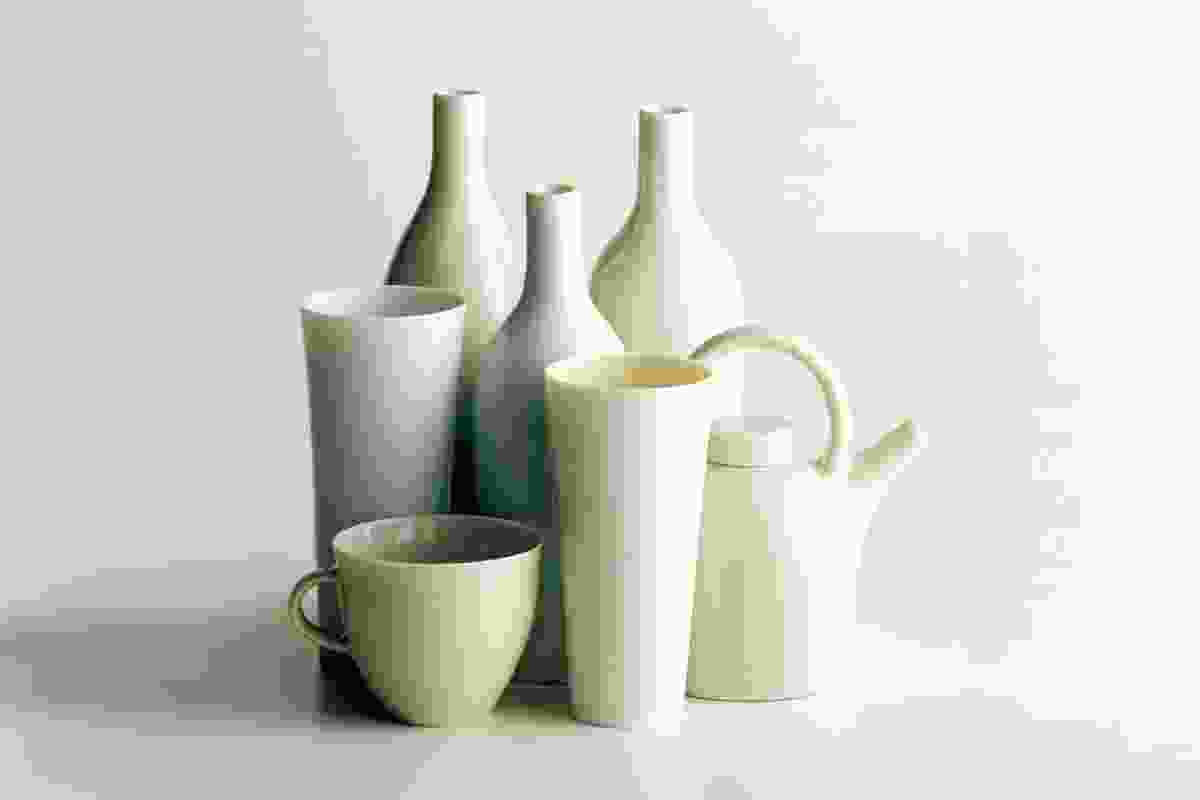 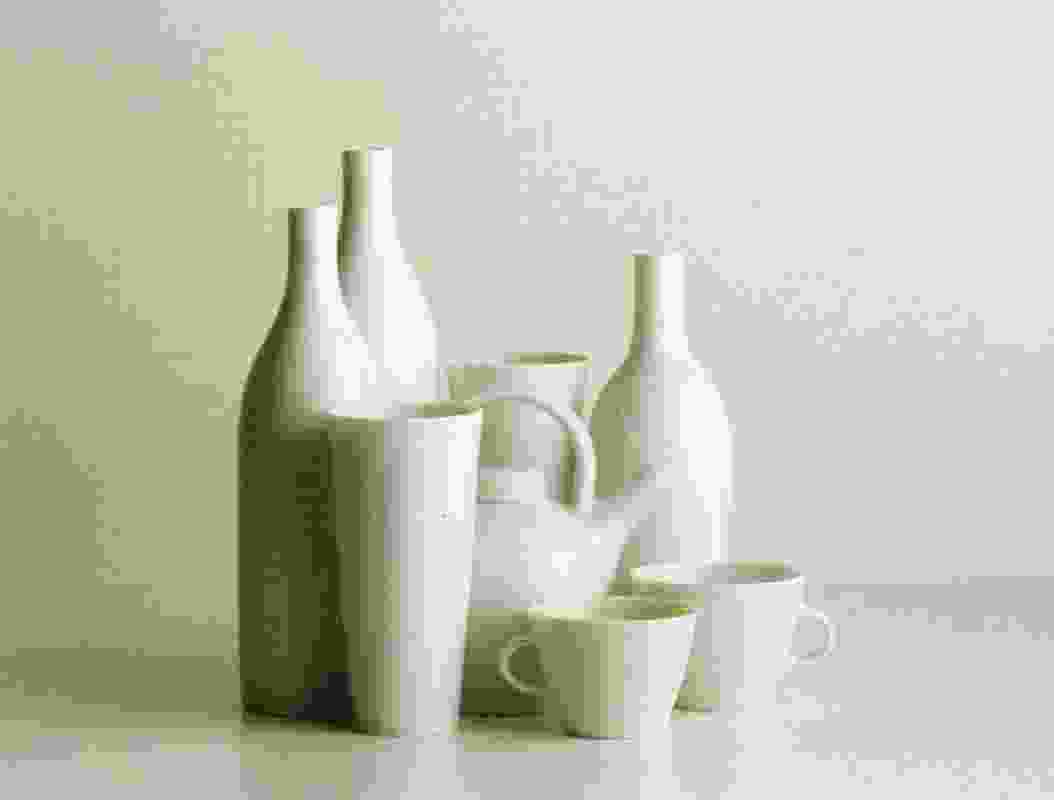 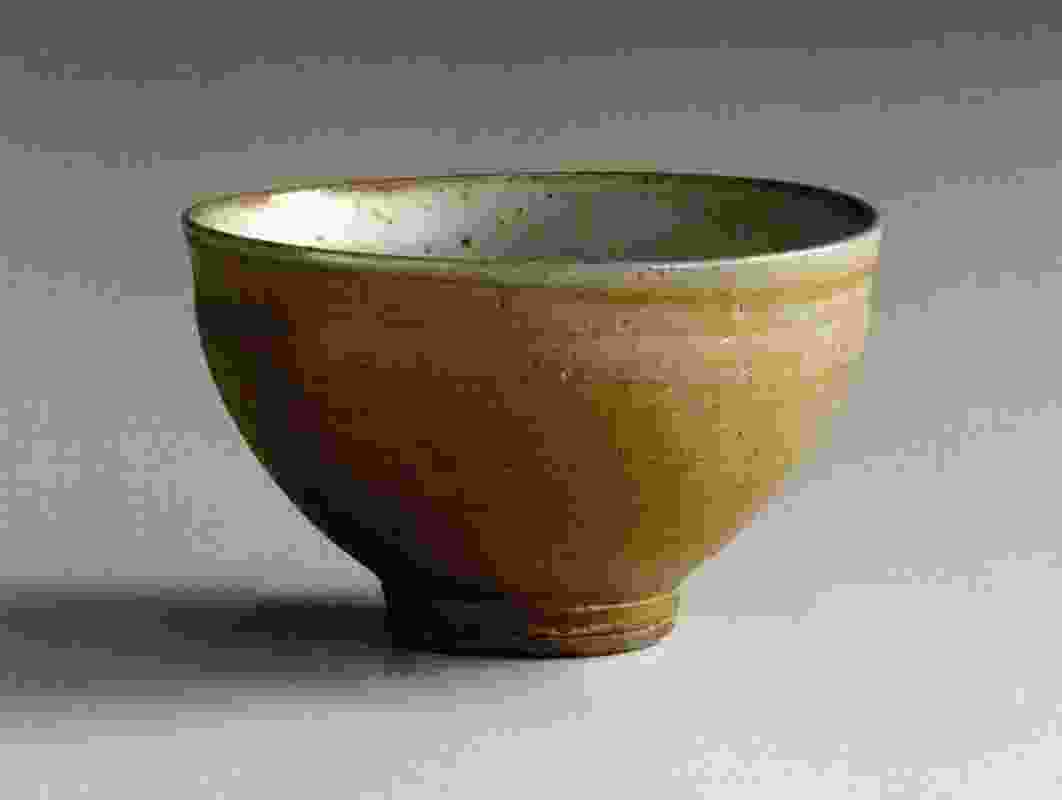 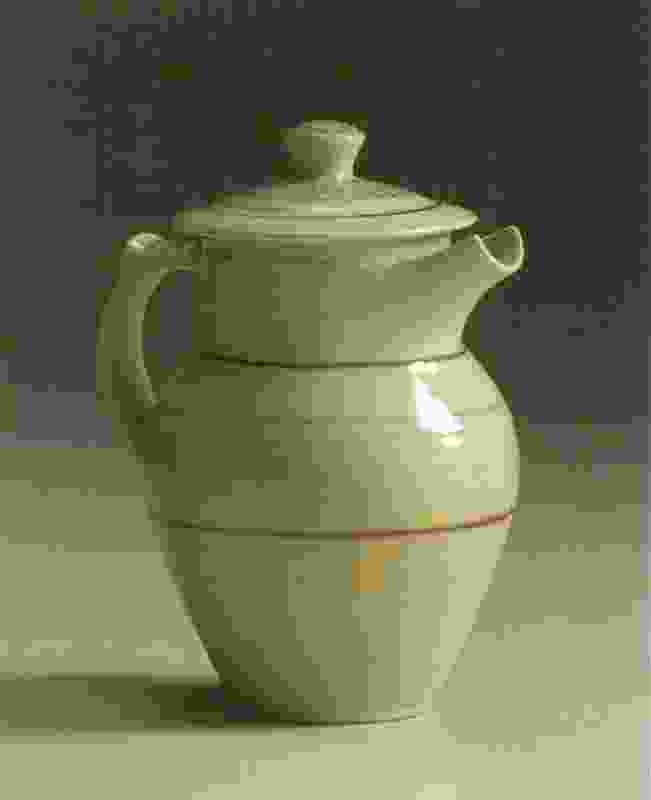