Architect Christopher Polly brings a sense of space and light into compact volumes in this semidetached, inner-city dwelling.

A study nook in the existing part of the house. Artworks: Wet Night, Haymarket and Harbour City by Ken Sterling.

For architect Christopher Polly, so-called “small jobs” – residential alterations and additions – provide a significantly enriching part of his emerging practice. In the case of Haines House in the inner-city Sydney enclave of Newtown, Chris faced all the constraints of a compact site, a semidetached dwelling, severely limited access and southern orientation. However, he is the first to embrace the experimentation and innovation that can result from such challenges. Add to that the joy of finding clients with open minds. “What was really exciting about this project was that the clients gave me relative free rein,” explains Chris. “They had no preconceived ideas and just a moderate list of requirements.”

After inheriting the small, semidetached home where she grew up, the principal client recognized that the existing dwelling could no longer accommodate the growing needs of her young family. “It was a dark, narrow jumble of rooms where we were constantly falling over one another,” she says. The brief called for the conversion of a two-bedroom, single-living house into a three-bedroom home with two living spaces. It also entailed improved connection with the backyard, retention of a bathroom that had been renovated a few years earlier, a second powder room and additional laundry facilities as well as increased natural light and ventilation, with views to the sky and trees.

The decision not to add a second storey was dictated by budget and consideration for neighbours. Instead, Chris’s response grafts a substantial contemporary volume onto the existing dwelling. It captures the centrally retained bathroom, which effectively divides the space into two living areas. “I was very conscious to distinguish between the old and the new. The more parts of the existing fabric you touch, the more it costs, which led to considered manipulations of existing parts.”

Chris orchestrated the spatial transformation in three acts. With minimal intervention, the original lounge room becomes the master bedroom. Its wall to the corridor is replaced by a large operable orange slider topped with highlight glazing that draws northern daylight into the narrow hallway. The third room is expanded to the boundary and a north-facing window is inserted. This newly claimed segment has a low ceiling that hints at the volumetric shift to come in the main act.

Old and new fabric are stitched together at the point of descent from the narrow hall into the first living area. The addition takes the form of a lightweight volume supported on a concrete slab for thermal mass that cantilevers at its rear expression. Extrapolating the pitch of a neighbour’s adjoining roof achieves an upswept roof plane. Continuing the original wall height along the boundary provides the datum, and clerestory fenestration bridges the two to overcome the limitations of the building’s southerly orientation. Highlight windows lining the eastern elevation draw in morning light and provide valuable glimpses of trees and sky. In the evening, clever uplighting gives the ceiling a floating feeling. Louvred sections also serve to cross-ventilate the space, following passive cooling principles.

Glazing the top of the central bathroom repeats the light touch of the clerestory windows. This pod separates the new volume into an upper “evening retreat” for watching TV and reading, and a lower “day space” with galley kitchen for meals preparation and open-plan dining, living area and terrace for seamless enjoyment of the back garden. “Cranked” forms in the kitchen and concealed laundry facilities also save the informal living area from rectilinear regularity.

“This project gave me an opportunity to explore volumes that alternate between compression and expansion,” says Chris. “Many guests get to the cosseted ‘evening’ living space and think ‘oh, that’s it’ until they realize there’s a tight set of four steps that open into the expanded informal living and kitchen area.” You can hear the collective “ahh” once visitors step down past the bathroom into the open-plan expanse.

A long “working wall” along the boundary of the new volume accommodates ample storage and the kitchen, and continues out onto the terrace to incorporate a second concealed powder room, playfully painted gold inside. This accent colour is the sole departure from otherwise monochromatic tones.

Despite a black-and-white colour scheme and a restrained materials palette, Chris eschews the severity of minimalism. “I do tend to have more modernist leanings,” he explains, “and in this project, black and white achieves an abstract, artistic quality,” crowned with two large Illucci pendant light shades. Chris balances minimalist sensibilities with warm and natural touches such as timber sliding doors, blackbutt steps to the garden and painted shiplap timber walls. The controlled palette is a considered counterpoint to the clients’ busy, colourful family life.

Bringing space and light into compact volumes on a tight site has certainly provided significant additional room and freedom for the owners and their children to grow into. For Chris, realizing his conceptual framework into built form with rigorous attention to detail is proof that a small job done beautifully can have a big impact on the quality of inhabitants’ lives. 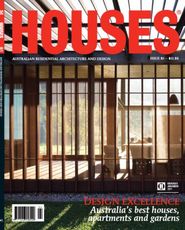 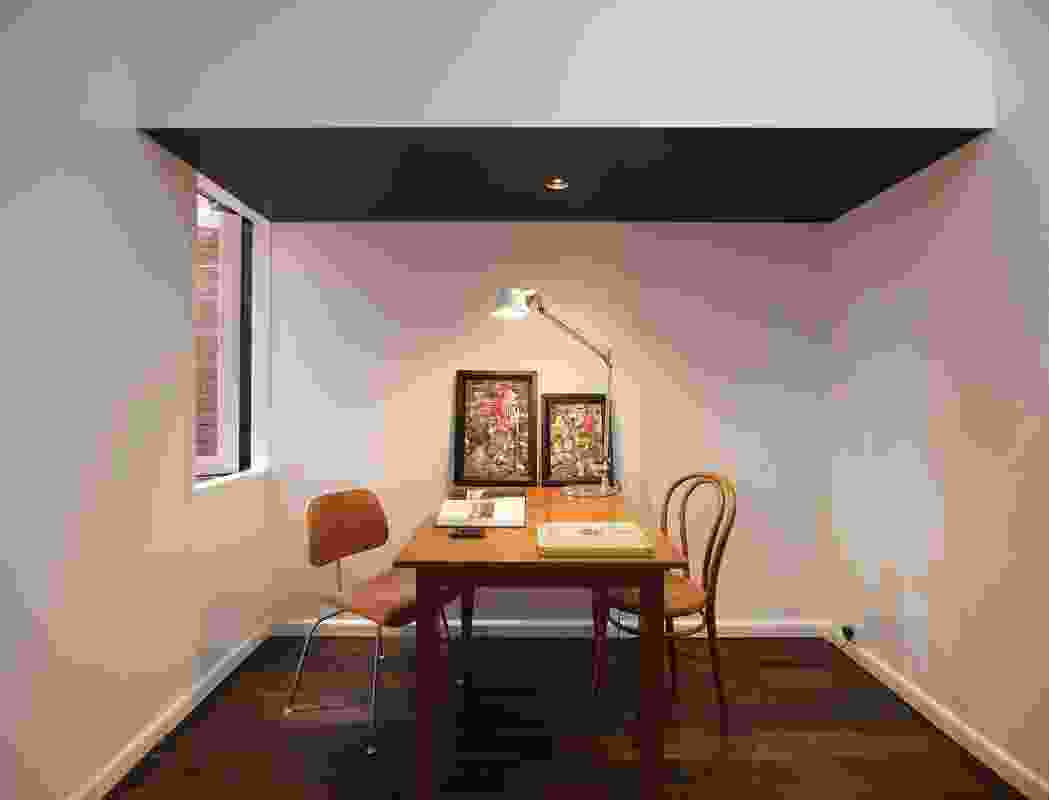 A study nook in the existing part of the house. Artworks: Wet Night, Haymarket and Harbour City by Ken Sterling. 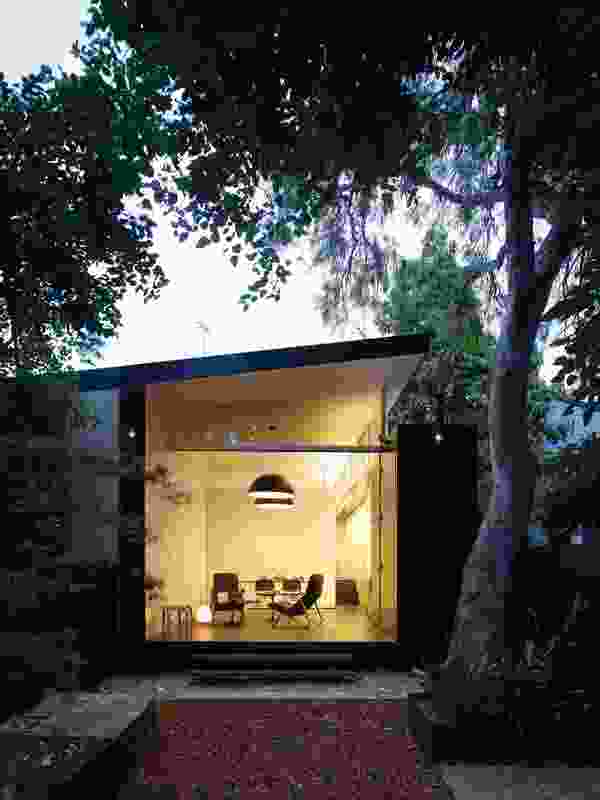 Extrapolating the pitch of the neighbour’s adjoining roof opens the roof plane up to eastern light.

A “working wall” along the boundary of the new volume extends onto the terrace to incorporate a concealed powder room. 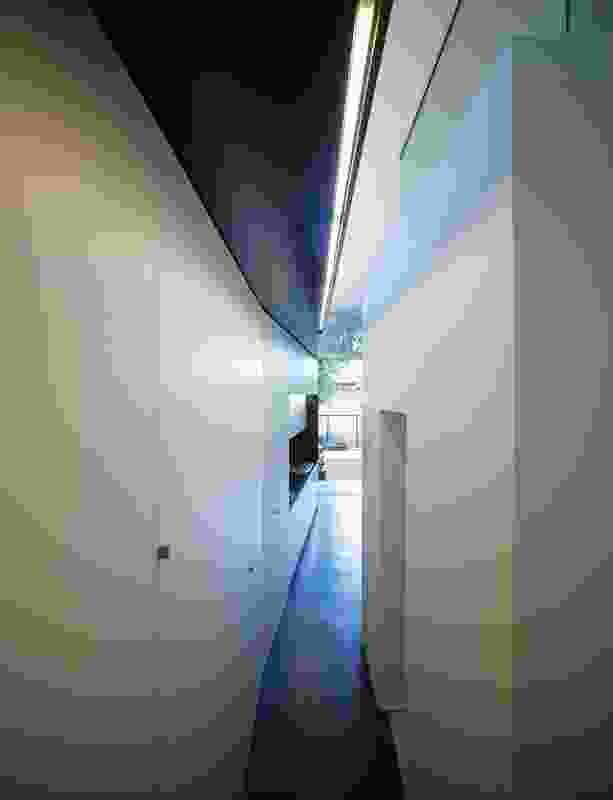 The hallway leading to the new volume at the rear of the property.