A splash of lime green detailing is seen inside and outside the house.

If anything about this project reminds you of the work of Andrew Maynard Architects (AMA) – the overhanging upper levels perhaps, or a colour palette that contrasts bright lime green with natural timber – it could be because a young architect’s early work can show the influence of the master. But Michael Ong was very careful to separate his private work from his role as employee at AMA. “I told the builder at the outset that site meetings would have to happen early in the morning before work,” says Michael, who calls his fledgling independent practice MODO, short for Michael Ong Design Office.

The client was his uncle, who had plenty of experience as a developer of residential projects, but who had never worked with an architect before. Michael’s design intent was partly to critique the conventional developer attitude to house design, which he describes in this way: “the siting of a typical suburban house is very simple – start from the centre and expand sideways until you reach the required floor area. Or, if you have maximized the site and you still need space, go up.

Once you have finished this process, the space around it becomes the garden – the backyard and the front yard.” Instead of following this model, Michael has amplified the interaction between outdoor and indoor spaces, making the design of the garden the priority in the early planning stages.

A wing containing living rooms is pushed against the southern boundary and stretched lengthwise to make the most of the northern sun on an east-west-oriented block. It incorporates a deck at seat height and is “great for those barbecues when there just aren’t enough chairs,” says Michael. External space is made to penetrate deep inside the mass of the house, pushing under the first-floor bedrooms towards the entry lobby, creating a covered courtyard that allows daylight into the ground floor. A table in the kitchen is designed to slide out from its special slot in the joinery for impromptu outdoor dining. The backyard is also multifunctional, designed to be used for basketball and tennis practice for the client’s growing family.

External space is made to penetrate deep inside the mass of the house, pushing under the first-floor bedrooms towards the entry lobby, creating a covered courtyard that allows daylight into the ground floor.

The builder was a friend of Michael’s uncle. The architect found himself amending documentation drawings on the fly as he learnt about AMA’s detailing methods. “I would go onto site for an AMA job and notice how important the little details were to creating a successful project,” he says. An example of this in the Hans House can be seen in the bathroom tiling. The junction between zones of coloured and white tiles is at an angle, rather than in a conventional straight line. “The relationship with the builder was quite relaxed. He didn’t mind coming on to site for a couple of hours on a weekend to discuss tiling ideas.”

Some details stand out for their youthful energy and experimental nature. “I wanted to create the effect of a control panel with an array of switches at the front door,” says Michael. (I’m thinking evil genius flicking a switch and a trap door opening somewhere … ) So, rather than being vertical, the switches are horizontal, mounted on top of a low wall at hand height. However, it turns out there is a reason light switches are normally vertical – they are safer that way; less likely to get wet. The result as constructed is still horizontal, but without the toggle levers I imagine Michael envisioned. The basketball hoop is another ambitious experiment. The backboard is composed of wire mesh, with the edges simply folded for stiffness. “I tried to see how fine a mesh I could get away with,” says Michael, “and it’s held up pretty well.”

Michael has carefully considered the textures and materials in the house. Inside the front door you arrive on a platform of concrete block paving or, as Michael puts it, “the skin of the blockwork wall falls down to become the floor, leading one into the house.” The low concrete block wall that incorporates the light switches also features a metal plate that acts as a family noticeboard with magnets, and a recessed seat that helps you remove your shoes.

Once shoeless, you step off the course platform onto polished timber to enter the ground-floor living areas, or turn 180 degrees and go upstairs to the more private upper levels. If you choose the latter you first encounter a single steel stair tread, a tactile experience for your bare feet that announces the threshold between public and private space, before you ascend the polished timber stairway.

The timber-clad upper levels overhang the ground floor, creating a canopy above the front door. The cantilever also pushes the upper levels closer to a mature tree in the front garden. In what he calls the “slower spaces” – the two bathrooms and a study area – Michael has carefully positioned the windows to frame views of the tree, encouraging the occupants to “move into a more contemplative state of mind,” as he puts it. The tree also provides shade for these west-facing rooms.

It was a long, hard effort for the twenty-seven-year-old to design and document a brand new three-storey house as his first project. He burnt the candle at both ends, and at the same time was determined not to compromise his commitment to the AMA office. At no stage did he ask for help from the AMA team during the project. He says he invited them to visit the house only when it was nearly complete, at which point they gave him both praise and constructive criticism. Twenty-seven is very young for an architect, given architects are considered young at forty. It goes without saying that Michael Ong learnt a lot in the process. I can’t imagine a better way to learn architecture. 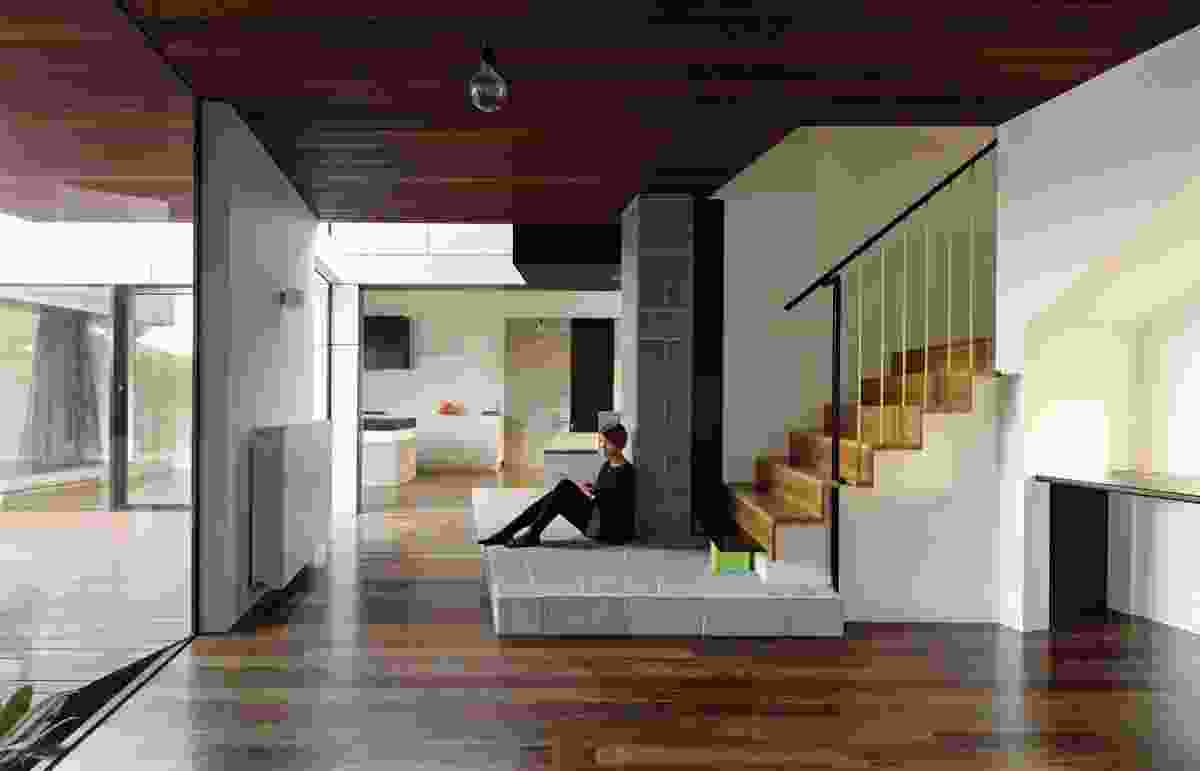 A splash of lime green detailing is seen inside and outside the house. 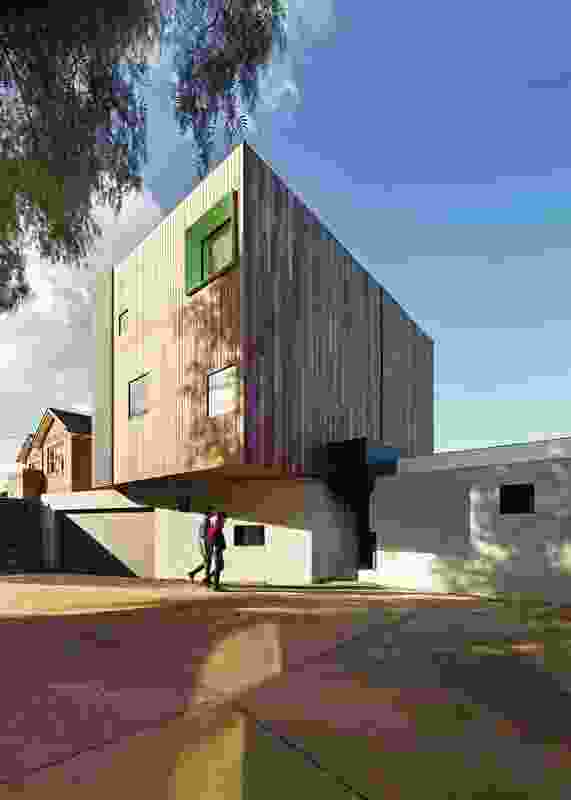 The overhang timber-clad upper levels create a canopy above the front door. 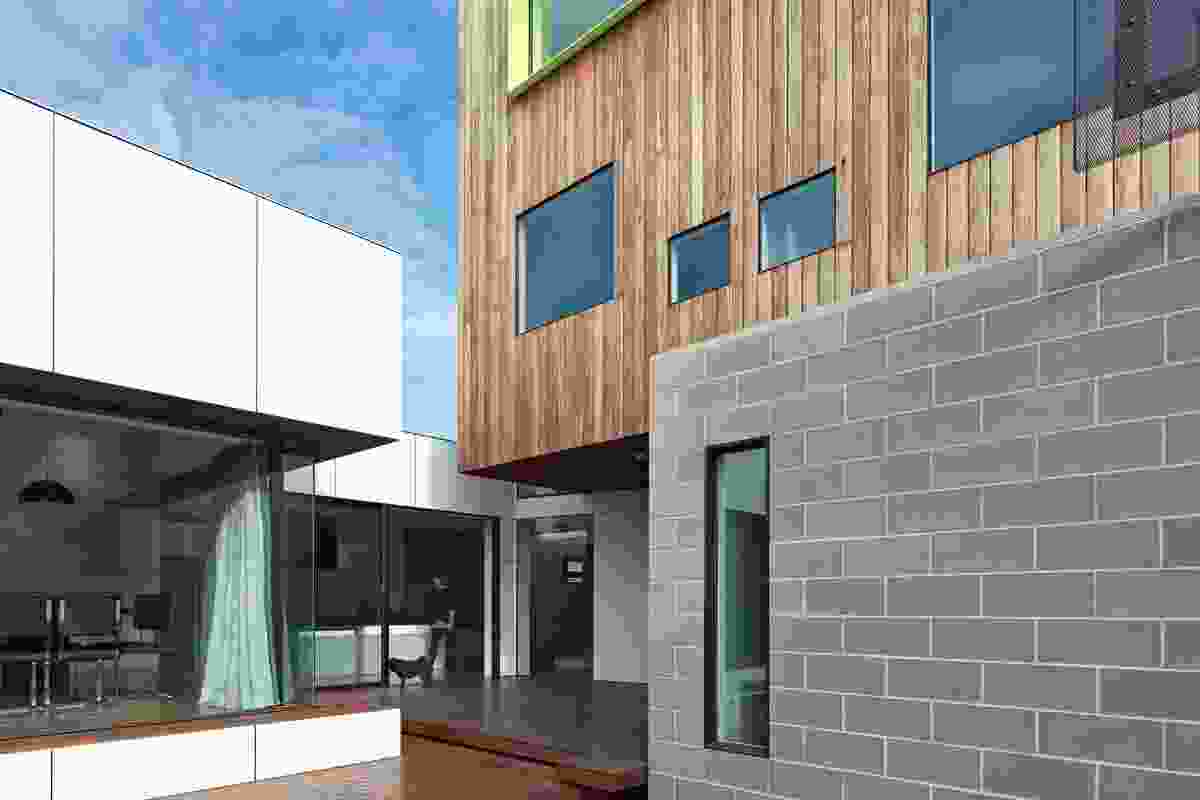 External space penetrates into the mass of the house. 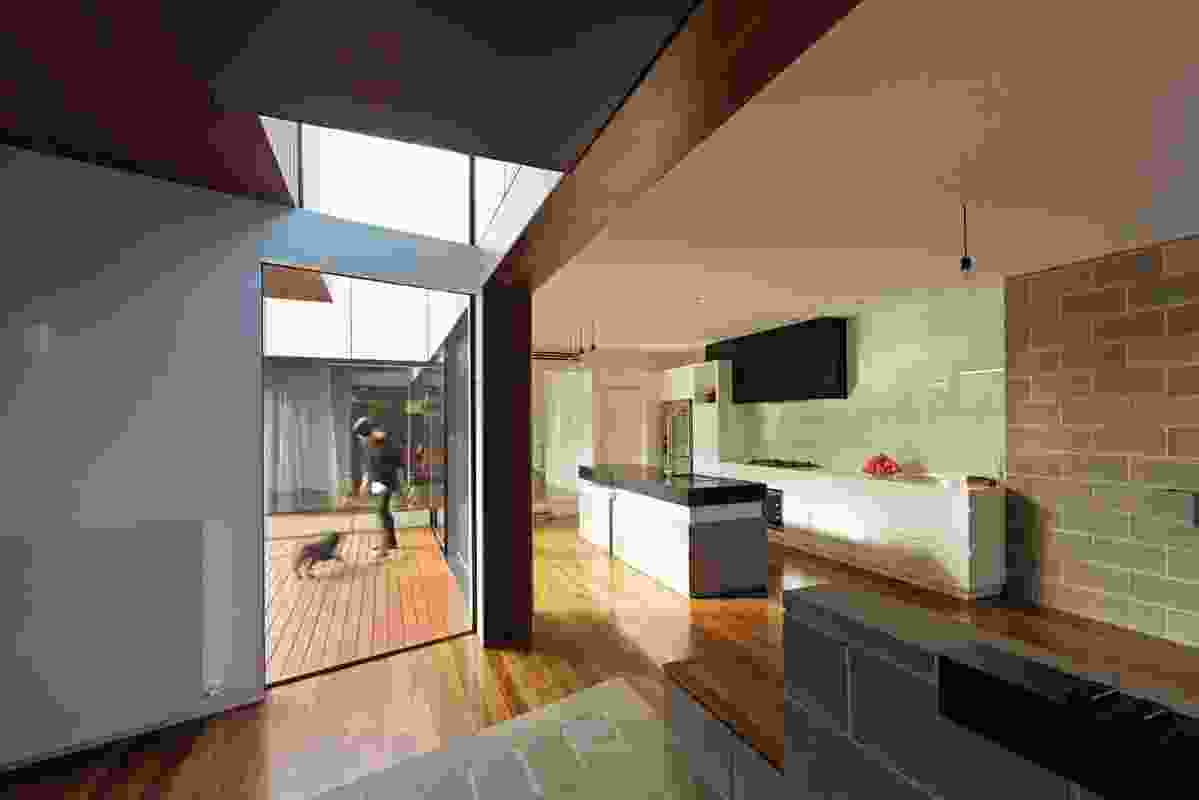 Living spaces pushed against the boundary open up to natural light. 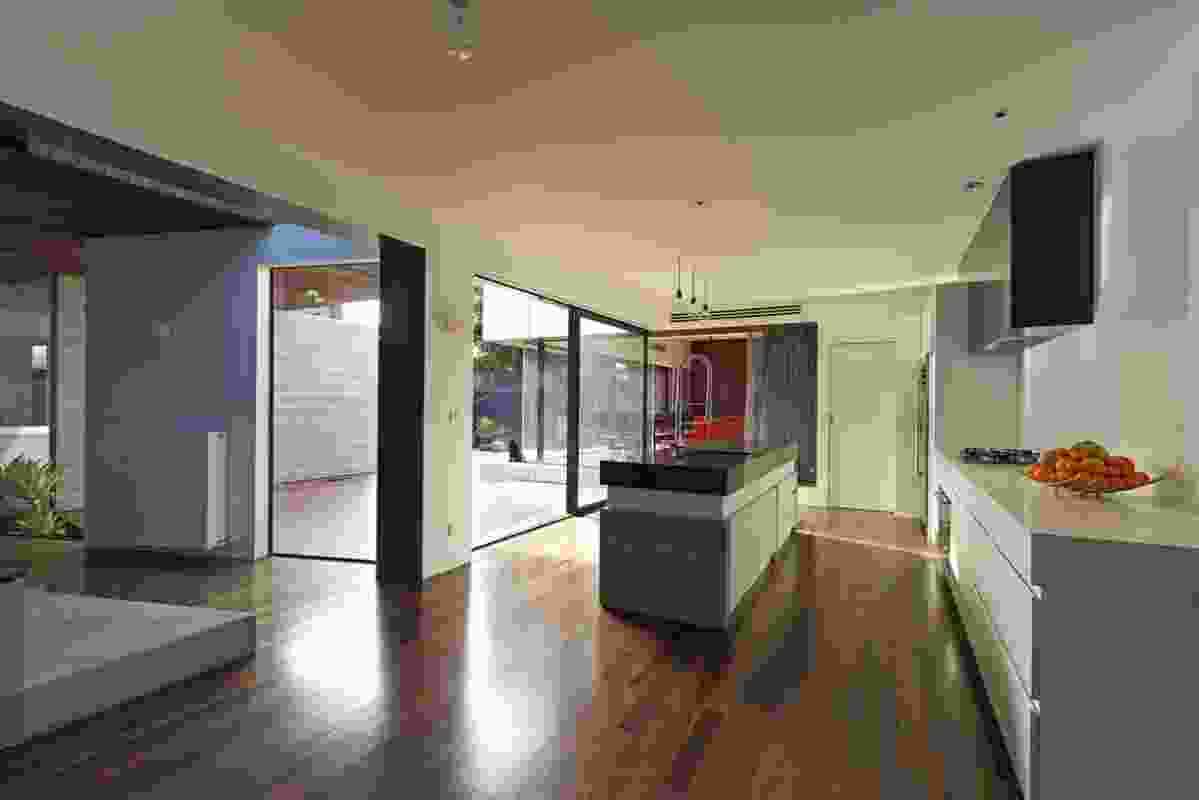 The kitchen opens out onto the deck. 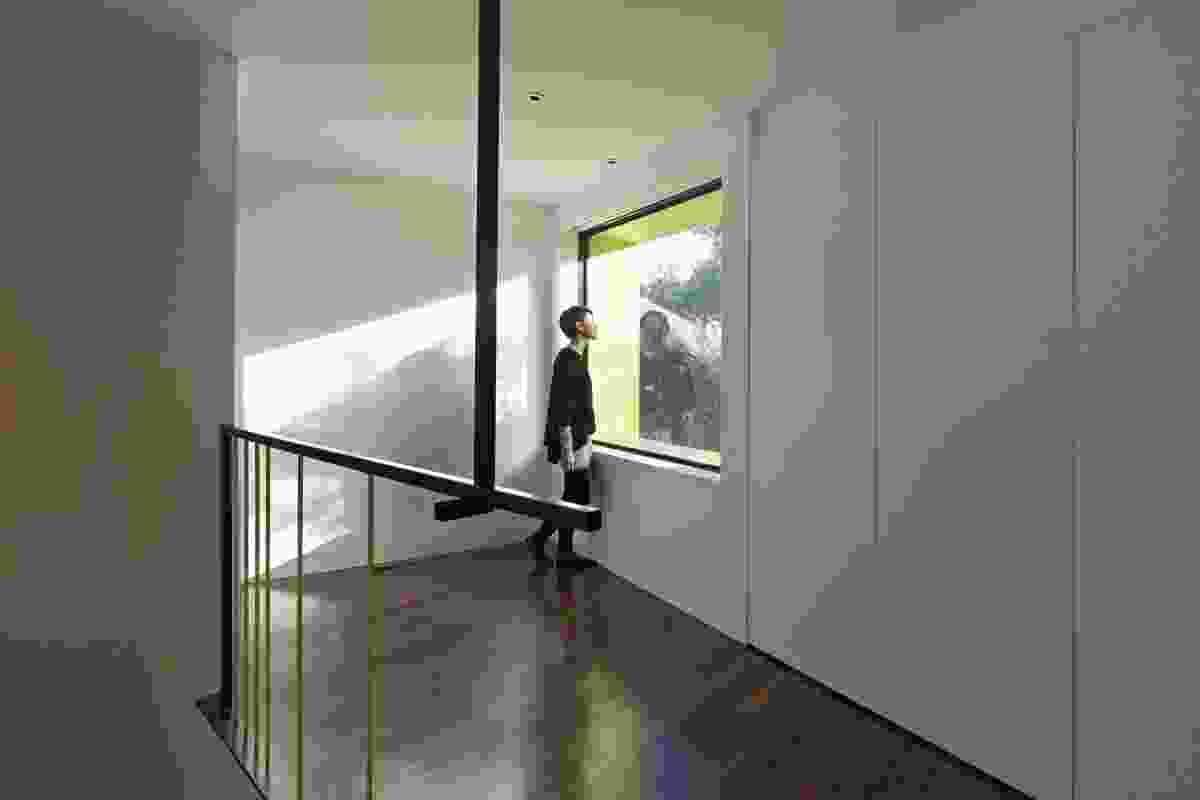 The upstairs landing sports two details: a window framing a tree outside and a signature balustrade detail. 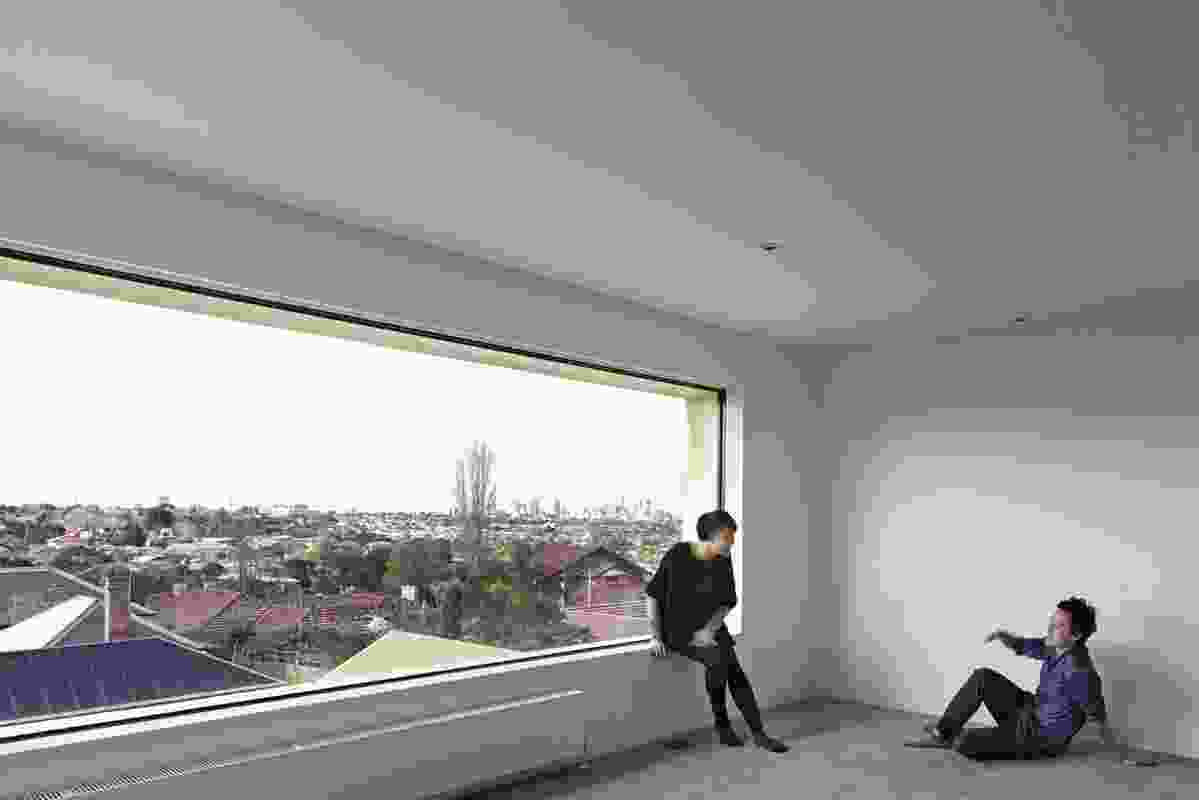 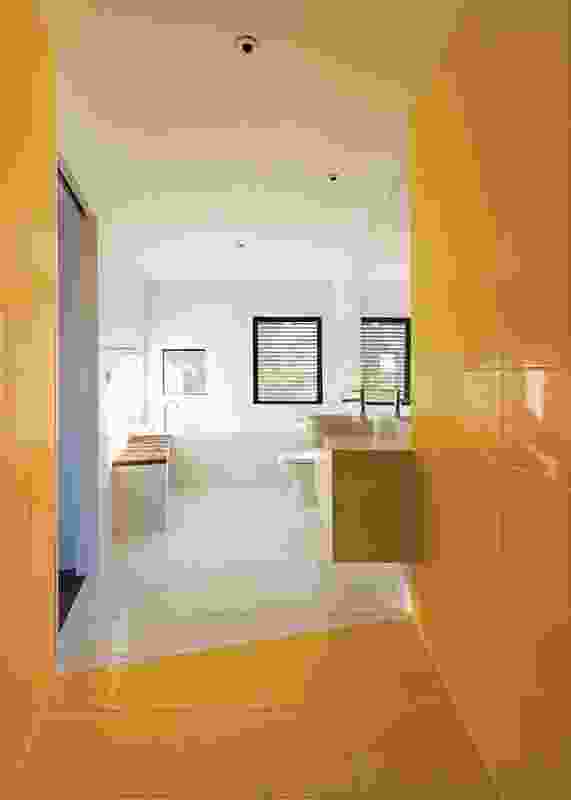 Colour is used powerfully in and playfully. 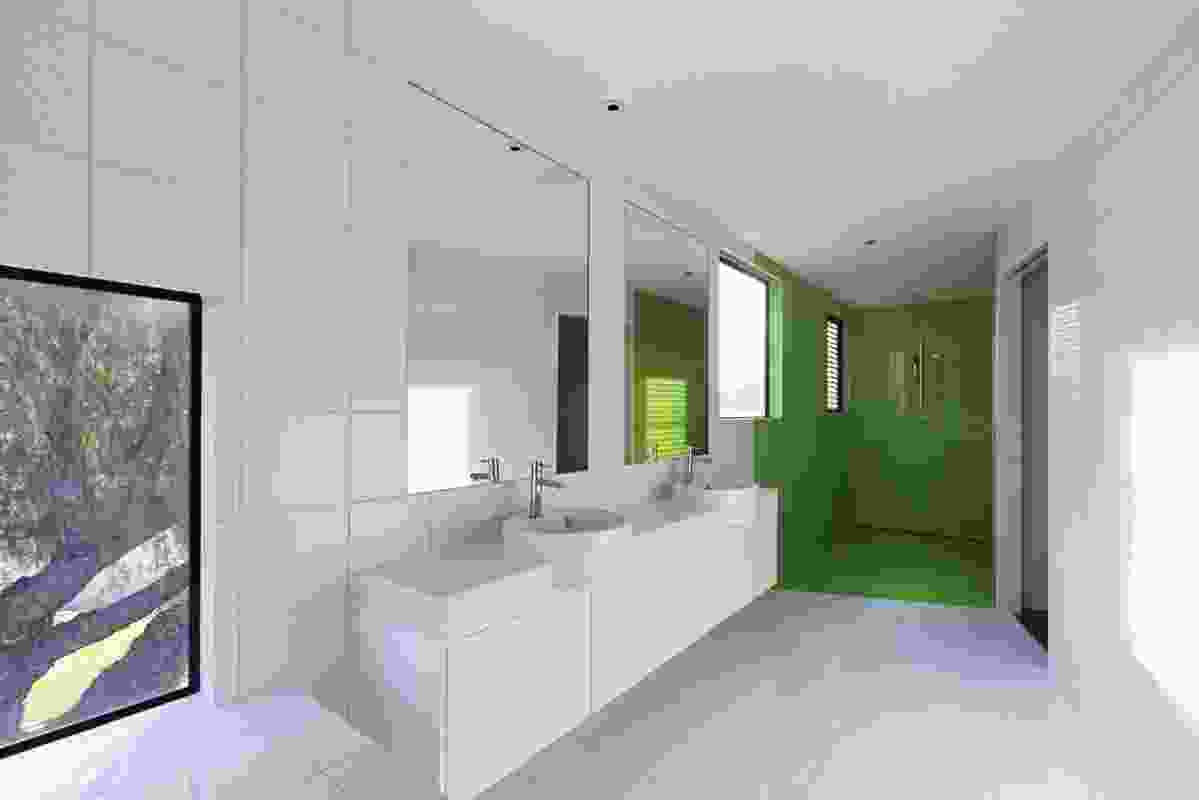 The lime green accent colour appears in one of the bathrooms. 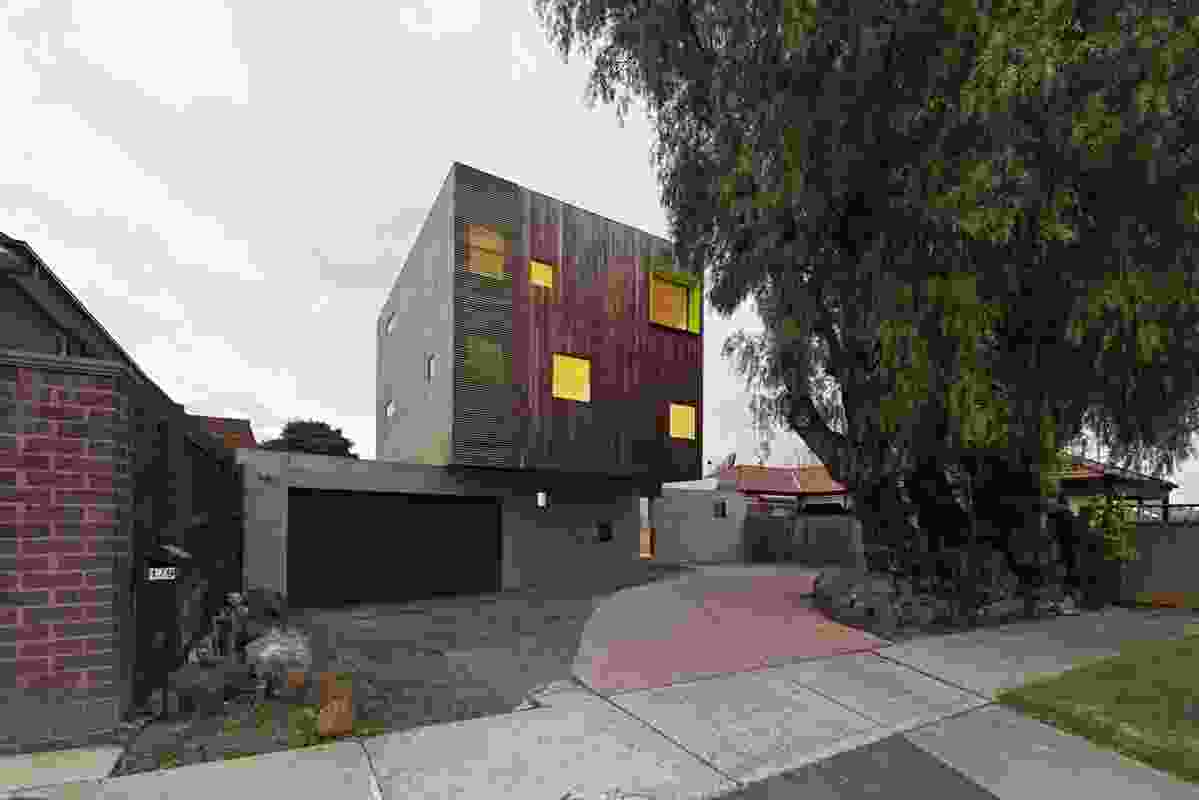 Windows in the first floor frame an interior view into the front yard’s mature tree.