An alteration and addition by AM Architecture responds to the layered history of the original Melbourne house, while preparing for its clients’ future.

A large timber truss acts as the balcony balustrade.

Surrounded by Edwardian and Victorian brick edifices off a bustling road in Melbourne’s inner-east, you could be forgiven for thinking you’d stepped back in time, were it not for the rows of luxury cars parked in the street. Tucked behind one of these edifices is an elegant, contemporary addition by Andrew Mellios of emerging practice AM Architecture.

Early investigations by Andrew uncovered a long history of alterations starting in the mid 1900s when the home was doubled in size and converted into four contorted units around a central light well. It was then neatly consolidated back into a single home by Norman Day and Associates, and later again, the courtyard was consumed and an additional floor was added to the rear. This process had left the house in a highly dysfunctional state that largely ignored the flow of the original Victorian plan and the potential offered by the north-facing rear garden.

Andrew, armed with an open brief from trusting clients, decided that the double-brick bones of the existing extension were too good to discard. Instead, the brick shell to the rear was gutted and a new house was skilfully inserted. It reads like a checklist for any contemporary architectural extension: re-do the kitchen and double it in size, upgrade the bathrooms, open the house up to let in more natural light and improve the connection to the garden. This seems simple enough, but the trick is to create something that is more than the sum of its parts.

The architects have achieved this most dramatically through the creation of what Andrew terms “platforms for the daily rituals of living,” using devices such as the imposingly scaled Calacatta marble slabs in the bathrooms and kitchen, and the timber platform hovering over the pool, to elevate the everyday activities of daily life to an almost ritualistic status. This is also true of the ground-floor ceiling, which is lined in warm-toned blackbutt timber that wraps up between the old and new buildings, creating another platform and an experience akin to walking underneath a finely crafted timber vessel in dry dock.

The zone of transition between an original home and its new addition is always an important space in this idiom: does one attempt to seamlessly tie new to old or create an easily recognizable schism? With this project, AM Architecture has had its cake and eaten it, too. The front rooms of the original home have been repurposed and re-dressed with a sensitivity that retains the original period character, while a new, sharply detailed suite of elements has been inserted using a palette of honest materials such as blackbutt timber in the custom-designed bookshelves, natural tan leather upholstery, black steel fittings, Calacatta stone and white porcelain tiles, to recall the rustic materiality of early Victorian homes.

A third section of the original Victorian hallway was reinstated, a deliberate move to lengthen the experience of the original house and hold back the full experience of the garden connection until one has arrived at the addition. At this point, the rear of the house clearly gives way to the new in a few cleverly orchestrated manoeuvres that stitch the old to the new without diminishing either. A monolithic bluestone slab acts as a freestanding tread between floor levels, suggesting a stepping stone between old and new. Vertical screens of large blackbutt sections flank this zone, a feature that is used again as a screen to the stairs from the living area.

When stepping down into the new kitchen, visitors are immediately drawn to an impressively scaled island bench, which is a natural staging ground for before guests are seated at the integrated dining table. A long banquette seat extends from the kitchen bench and furthers the amalgamation of the living spaces into the kitchen. Andrew notes the influence of time spent in kitchens of Mediterranean homes while visiting family, where the space serves as a dining room, a family room and even a bedroom to capture warmth from the oven on cold nights.

The architectural language is continued on the first floor with a new balcony that allows the bedrooms to open and directly experience the garden. Here, the diagonals used earlier in the study bookshelves find their natural home in the finely detailed timber and steel trusses of the balcony and in the pool’s pergola; which will eventually be overrun with a grape vine.

The balcony truss is also put to other uses: structurally it transfers load to minimize the depth of the supporting steel, acting as a balustrade and screening framework for future vegetation and also serving as a refined and contemporary interpretation of the ubiquitous Victorian fretwork adorning many of the homes in the street. This gesture is a fitting bookend to a project that has responded so thoughtfully to the building’s history, while preparing for its clients’ future. 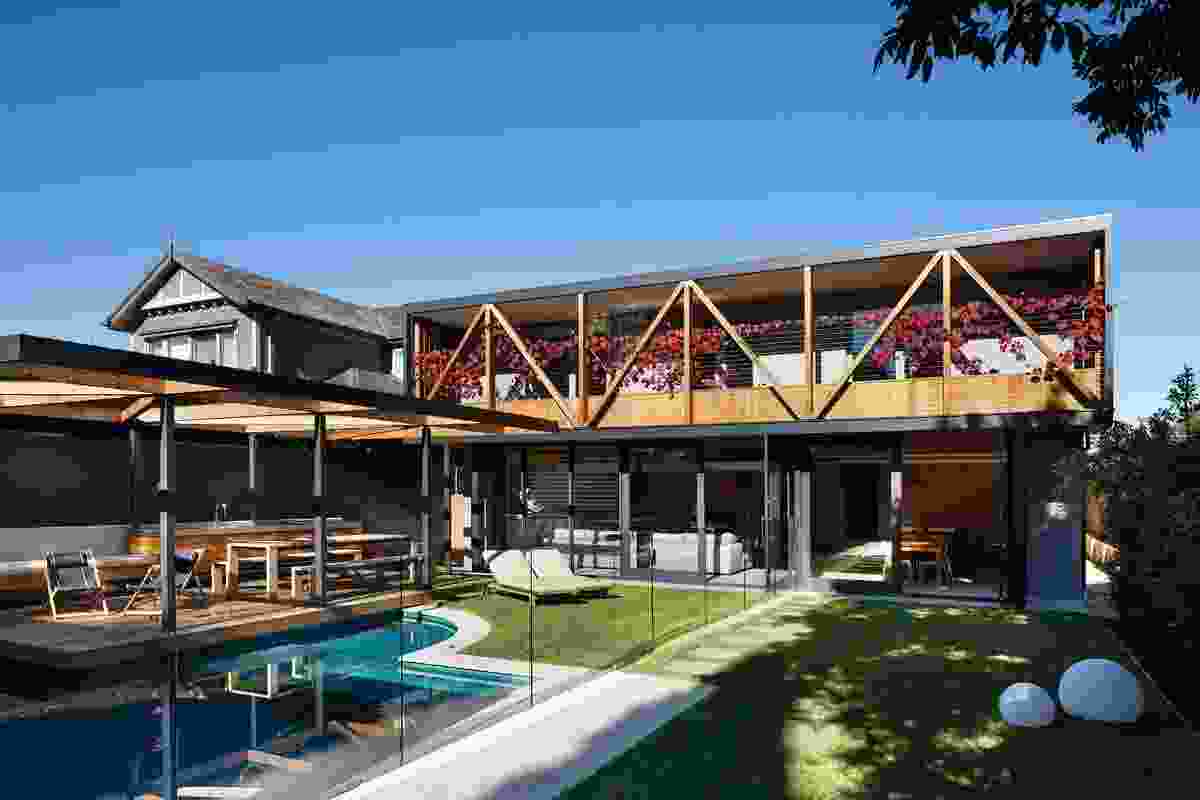 A large timber truss acts as the balcony balustrade. 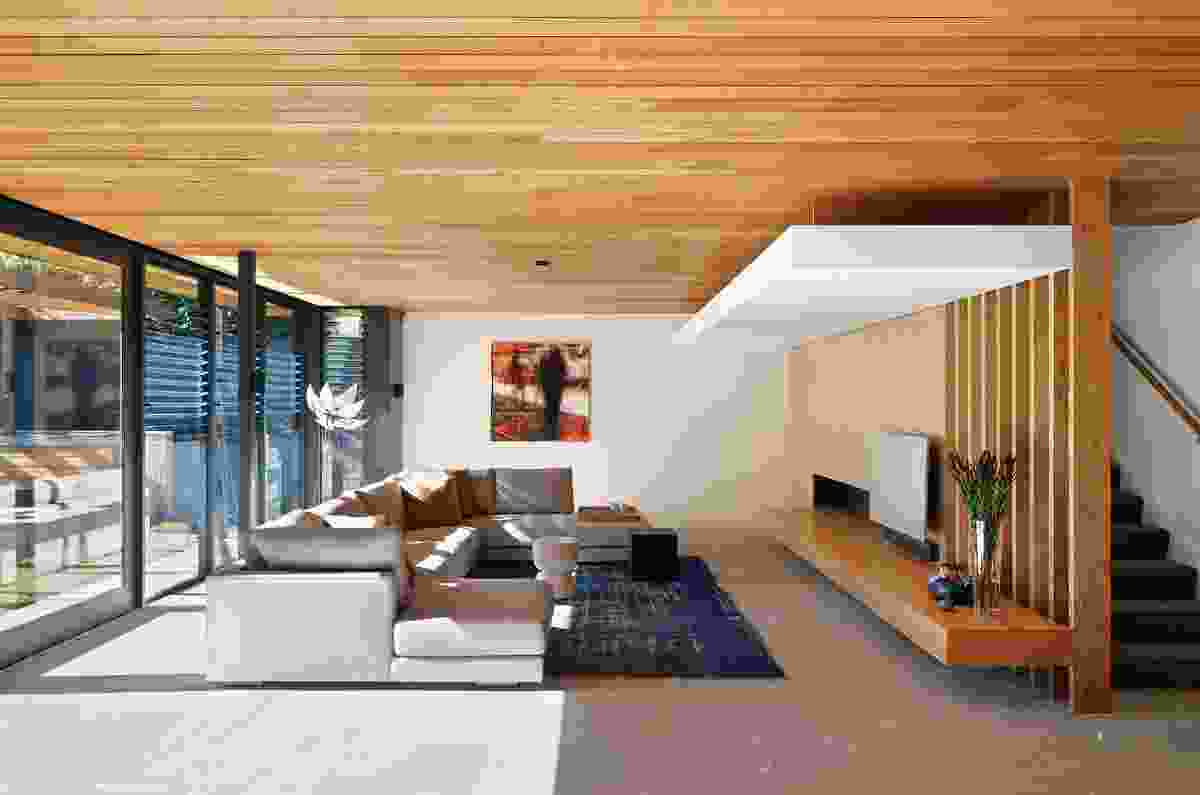 The ground-floor ceiling is blackbutt. Artwork is Pool 2008, by Robert Boynes. 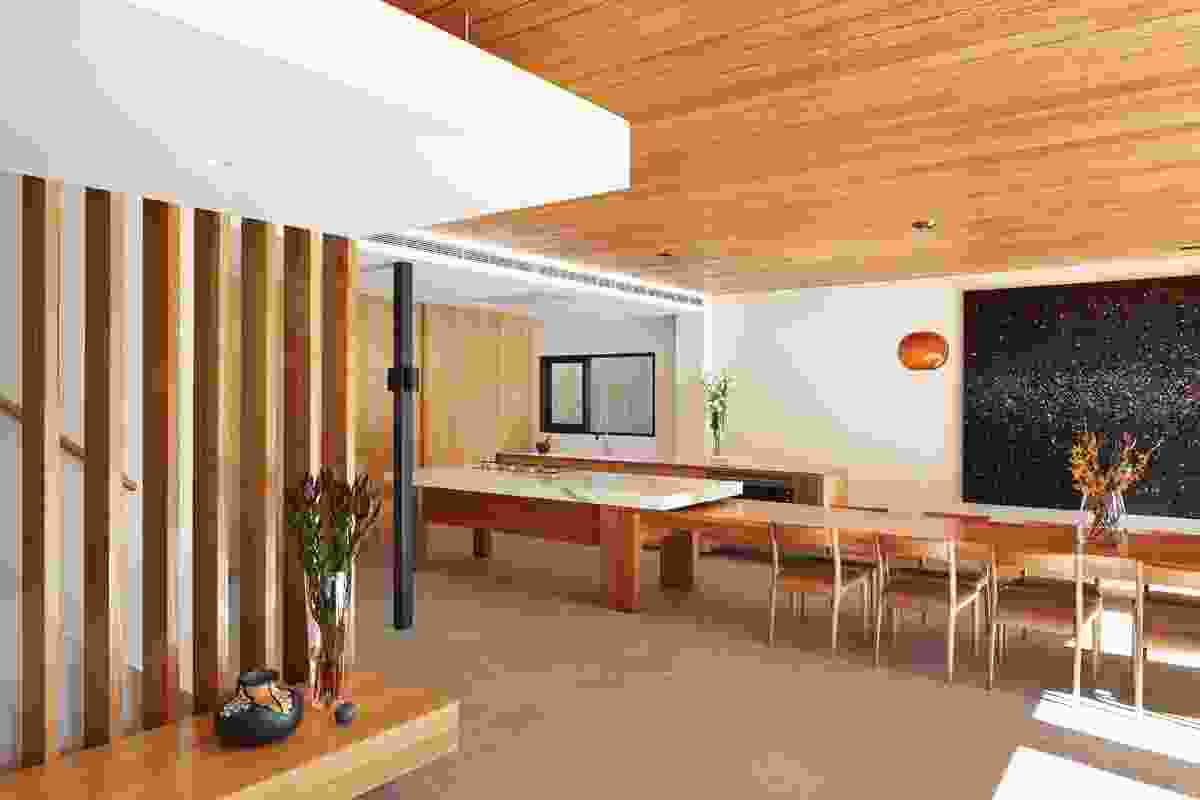 The kitchen’s Calacatta marble bench overlaps the dining table. Artwork is That fair via lactea, 2009, by Robert Hollingworth. 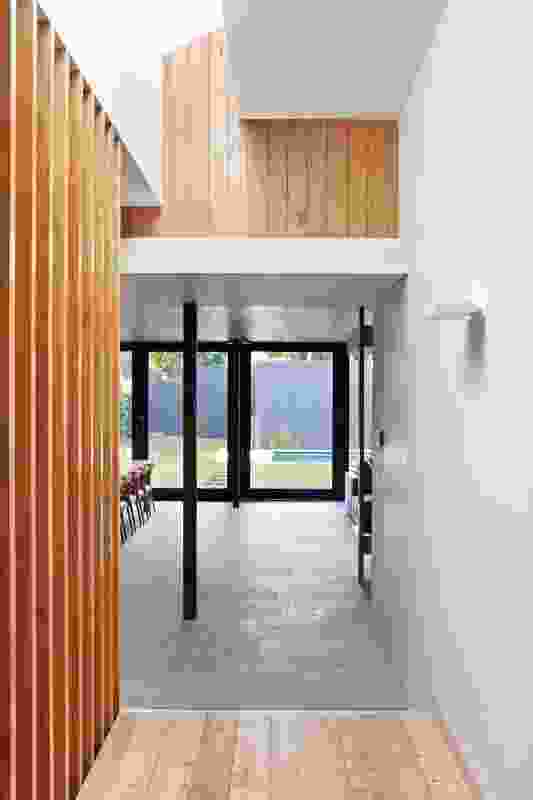 The rear garden connection is unveiled at the end of the original hallway. 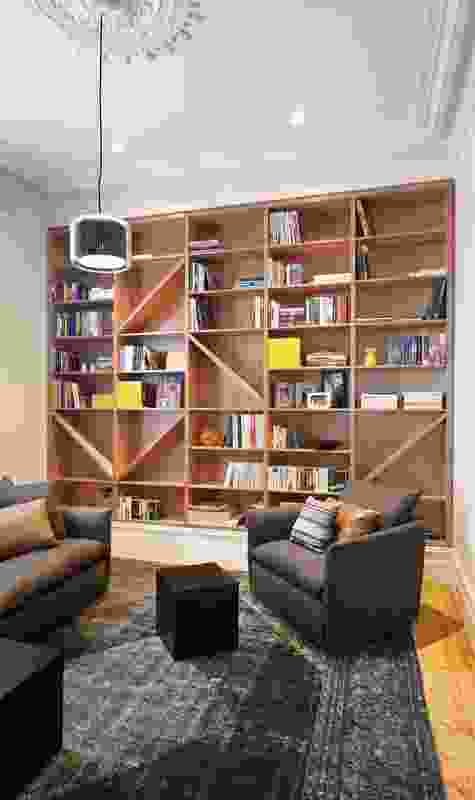 A custom-designed bookshelf in one of the original rooms. 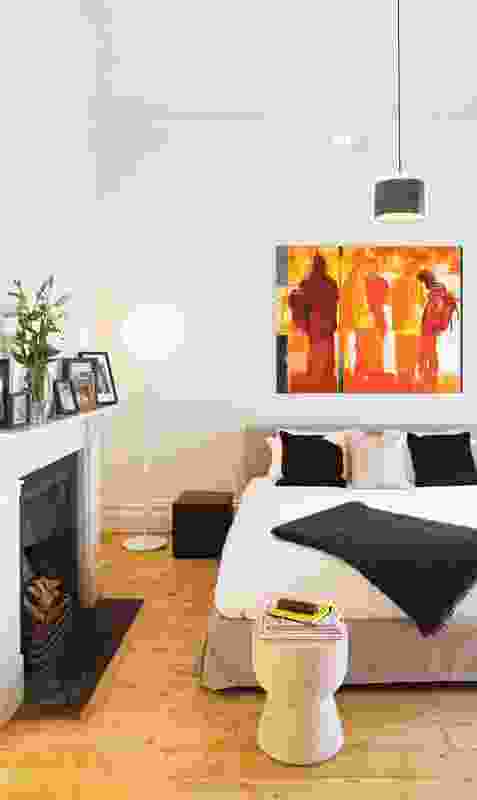 Front rooms are repurposed. Artwork is Civic, 2008, by Robert Boynes. 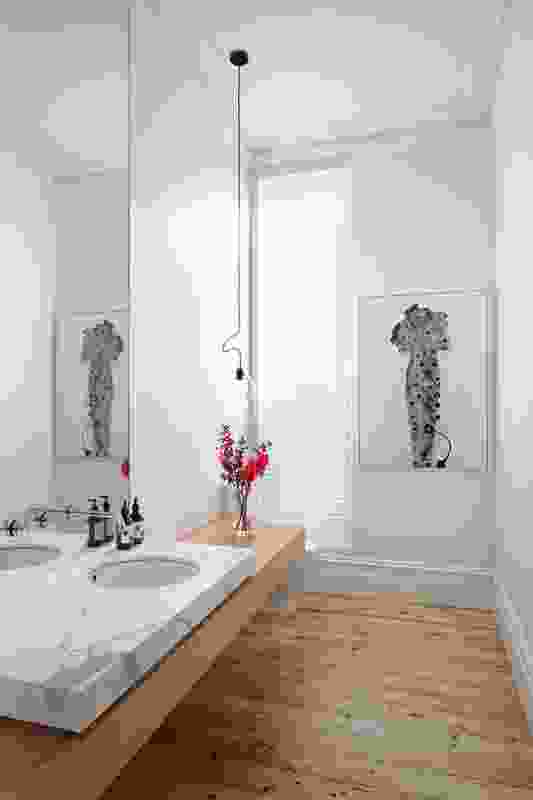 A marble platform hovers above a bench to form the bathroom joinery. Artwork is Plasmagel, 2011, by Doble and Strong. 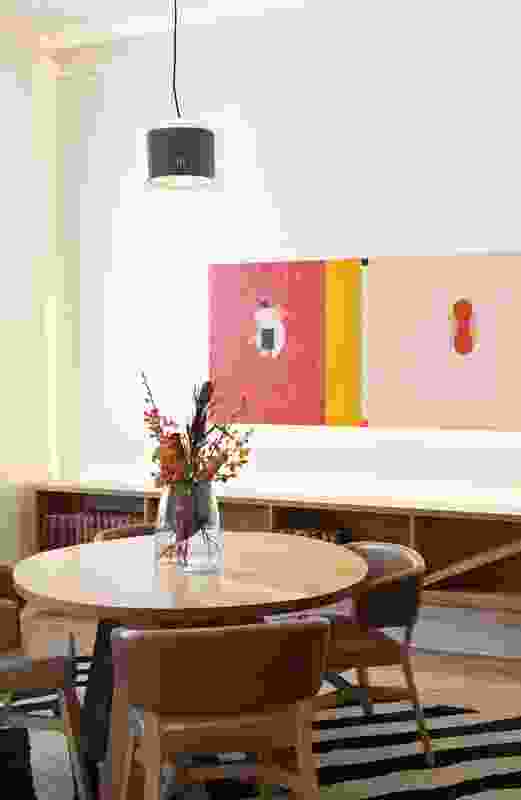 An original front room converted into an office space. Artwork is em>Wind passed her brow, 1999 by Robert Jacks.