Richard Francis-Jones has resigned as president of the RAIA NSW Chapter Council. He will remain on council as immediate past president and will continue as chair of the Bulletin and large practice committees ›› Premier Bob Carr has approved funds for stage one of the Opera House refurbishment ›› Davenport Campbell has been bought by its managing director Trevor Dixon and design director Peter Wanger ›› Peddle Thorp and SJB Architects are the architects for the mixed-use redevelopment of St Margaret’s Hospital in Surry Hills ›› Barrie Shelton is a new sesquicentennial senior lecturer and coordinator of the urban design program at USydney ›› Peter Droege has left USydney to become strategic design partner at DEM. He retains an honorary association with the university ›› The Migration Heritage Centre has released “Tune in to Fairfield City: a multicultural driving tour” that explains the area’s cultural diversity through its architecture ›› McConnellRayner are refurbishing the Wentworth Hotel, the only building by SOM in Australia. Their brief is to “return the hotel to its former glory”

Eli Gianinni is the new RAIA Vic Chapter President ›› The Olympic Swimming Stadium (1956) by Kevin Borland, Peter McIntyre, John and Phyllis Murphy and Bill Irwin is now on Heritage Victoria’s register. McIntyre will be consulted on any proposed changes to the building ›› Daryl Jackson Architects has promoted Paul Katz, Brian Richards and Jennifer Calzini to associate level ›› Woodhead International will merge with KLCK Architects who are specialists in aged care and health ›› Hwa Hong Lim has won the 2001 SJB Architects Design Award for final year architecture students at UMelbourne ›› The Freemasons Hospital in East Melbourne has been placed on Heritage Victoria’s register. This includes the original 1930s building by Stephenson and Meldrum, the 1950s extension by Meldrum and Noad, and the parcel of land that the hospital sits on. The Freemasons are reportedly unhappy as they believe this threatens their proposed development of the site ›› Swaney Draper’s Bundoora Netball and Sports Centre, at RMIT, is now open ›› Daryl Jackson is acting as both architect and developer for the apartment complex Liverpool 16 ›› Sean Godsell’s Future Shack has generated a great deal of interest, with UN-backed emergency housing organisation Habitat Pacific currently exploring joint development of the project

Catherine Townsend is the new RAIA ACT Chapter president ›› Tonkin Zulaikha Greer and gallery representatives have held a series of consultations with key stakeholders including Col Madigan and Barbara Buchanan. Peter Tonkin reports that these “reached a high level of consensus about the heritage planning undertaken to date, and the overall approach of the new scheme”. TZG are now in the process of finalising the design. Preliminary drawings have been released on the gallery’s website ›› The Griffin’s complete set of Canberra drawings are on display at the National Archives

The NT branch of the National Trust is attempting to buy two prewar Darwin houses, by Beni Burnett. The house are part of the Myilli Point heritage precinct and are currently owned by the Commonwealth, which has deferred the public auction of the houses and is negotiating with the National Trust which is trying to raise the money

The Millennium Library competition has been won by Donovan Hill and Peddle Thorp ›› The Qld Gallery of Modern Art competition has been won by Architectus and Davenport Campbell & Partners ›› Alan Jordan has been appointed as a director of Dimitriou Architects and Mikkai Toivanen has joined the interior design team ›› Wayne Petrie is the new RAIA Qld Chapter president ›› The west front of St Johns Cathedral has been completed. Started in 1906 the cathedral is being completed to the original design of Frank & John Pearson under the control of master mason Peter Dare. There are a further five stages to go ›› Canopy 01 (Jacob Allom Wade and Total Project Group, Cairns), have won the competition for the Wooroonooran Canopy Walk ›› Cottee Parker Architects have established a strategic alliance with Geyer

John Maitland is finally realising the Aldinga Arts-Eco Village in the Willunga Basin. The $32 million “green village” will include common arts facilities, an organic permaculture farm, mixed-density ecofriendly houses and a community housing co-operative. Maitland is both the architect and the eco-village chairman ›› Wardle + Hassell (a joint venture company) have won the City West Stage 2 Development at USouth Australia ›› The local press have declared Flightpath Architects’ latest Hindley Street project, Tapas restaurant, to be “the most original and thrilling building in Adelaide” ›› Adrian Evans is joining Jackman Gooden. The practice, which is celebrating its 150th anniversary, will now be known as JackmanParkenEvans

Following the State Government’s decision to retain the WA Architects Act, discussions have been held with the Architects Board, the RAIA, and the ACA regarding the amendments required to update the Act ›› David Standen has been recognised for 32 years of service to the WA practice committee ›› WA Chapter President Warren Kerr represented the RAIA at a public forum to debate the Government’s decision to bring the southern suburbs railway into Perth via the Narrows Bridge ›› DesignInc Perth has been appointed to design a new chemistry centre for the government ›› UWA has agreed to include the name of the architect on plaques for every new building project ›› A joint venture between Silver Thomas Hanley and Jones Coulter Young has been appointed to design the new Geraldton Hospital project ›› Michael Broderick is the winner of the Architects Board Award for 2002 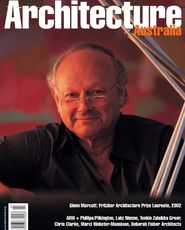