What's been happening? Check this bulletin of news

Why didn’t the Paul Keating government announce during the election its Australia Award for Urban Design? A winner is chosen, but bureaucrats are not holding breath for an announcement from the Howard government • As predicted long before the election, the new government is dissecting the NCPA • The RAIA has been advised that its professional development system cannot legally be enforced on members. Yet only brilliant or stupid practitioners will ignore its valuable seminar schedule • Peddle Thorp ’s state offices are reverting to their old triple-barrel names for easier identification • The National Association of Women in Construction (NAWIC) is picking up steam, with healthy membership in all state capitals and NZ, and $200,000 federal funding • Gareth Cole and Peter Altona ’s Archi-Net bulletin board for architects is building up subscribers • Sylvia Gilmour is the RAIA’s new national Manager Member Services and S haun Humphreys has become Manager Communications • A legal skirmish delayed the Industrial Relations Commission’s hearing of wage claims for salaried architects (not landscape architects: phew!). Contestants are APESMA (Association of Professional Engineers, Scientists and Managers Australia) for employees and ACA (Association of Consulting Architects) for employers • Austrade invites architects to apply for grants from its Urban Export Fund; applicable to offshore marketing of Oz expertise in urban development and precinct housing. Call Pradeep Khanna, (02) 390 2774.

Mask by designer Gordon Andrews, from his Sydney exhibition curated by Rosie Nice.

Amid a crescendo of complaint about progress on the Olympics, NSW Government Architect  Chris Johnson  has been appointed to resolve the design of the site along principles established in the  Lawrence Nield  committee’s masterplan. Replying to criticism of the plan, he claimed that many observers had wrongly imagined the Olympic developments as a potential town centre instead of a sports and entertainment precinct • Seven architectural offices have won work designing the Royal Agricultural Society’s new Showgrounds at Homebush Bay. They are  Philip Cox Richardson Taylor  ,  Conybeare Morrison  and  Peddle Thorp & Walker  (masterplan and show ring); Ancher Mortlock and Woolley  (halls and administration) and  Scott Carver  ,  SPJH  and  Timothy Court  (animal pavilions) •  Rice Daubney  has lodged a design to refurbish  John Andrews  ’ American Express Tower in Sydney. The $60 million scheme includes aerial gardens •  Peddle Thorp & Walker  and  Clive Lucas Stapleton  are architects on the team which won the $350 million redevelopment of Sydney’s Walsh Bay finger wharves as a cultural precinct • After making anti-Jewish statements, architect  Neville Gruzman  has been under pressure to resign as Mayor of Woollahra; he’s also the subject of a complaint by  Philip Cox  to the Independent Commission for Corruption and is defending in court a client’s claim of $65,000. He’s cross-suing for $27,000 • Introducing  Lindsay Clare  at a Tusculum talk,  Lawrence Nield  described him as “in his own genre, perhaps the outstanding architect in Australia” •  Anne Proudfoot  ’s Architext bookshop has moved to smaller but more stylish new premises in the back building at Tusculum • Designer  Gordon Andrews  is exhibiting a new batch of his celebrated masks in modern/primitif style at the Mary Place Gallery, Paddington • Construction has resumed on one of Sydney’s notorious ‘black holes’, World Square; now being planned by Peddle Thorp & Walker  as retail, hotels, apartments and commercial •  Gazzard Sheldon  are designing the $45 million Stage 1 redevelopment of the Panthers entertainment colossus at Penrith • The University of Sydney has awarded an honorary Doctor of Science degree to architect/conservationist  Milo Dunphy  , who is seriously ill • Multiple housing is the theme of the second issue of Content; a deluxe mono periodical from  Sydney Uni  , with a name susceptible to mispronunciation. (You emphasise the second ‘t’ in Sydney and the first in Melbourne) • The Catholic Church is planning to subdivide and sell 25 hectares on Sydney’s North Head for housing and health buildings • Aboriginal groups are arguing the future of their ghetto at Eveleigh Street, Redfern. The Aboriginal Housing Corporation, which holds the area in trust, wants to relocate residents into various other suburbs and develop a $30 million business, retail and cultural centre there • Sydney’s Liverpool Street is to be upgraded as a Spanish quarter.

In a pre-election promise, the Howard government proposed 999- year (instead of 99-year) leaseholds of land in the ACT • The Keating government’s plans for Aboriginal cultural centres on Acton Peninsula are unlikely to be pursued by the new Howard government—at least not on that site • The ACT RAIA received $22,000 from the former federal government to help produce a touring exhibition,  Early Canberra Housing   .

The RAIA and the University of Tasmania are preparing a second list of 20th century buildings for the Heritage Council to include in its Register of the National Estate. Noted are Hobart’s Art Deco HCC and T&G buildings, the Cadbury complex at Claremont and the Moorilla Estate; a recently sold property in north Hobart with a  Roy Grounds -designed homestead • The Hobart City Council has been encouraging city property owners to facelift their buildings.

Discontent in the WA Chapter over RAIA National’s retrospective 15% levy on sponsorship income; earmarked to pay the new National Manager Public Affairs • The RAIA is celebrating the centenary of architecture institutes in WA •  Meino Mirkva  is the WA RAIA’s new State Manager • Debate is reheating over the future of Council House, a 1960s  Jeffrey Howlett  design in a zone of older buildings, as expiry looms on the Perth City Council’s current lease at Westralia Square • Subiaco is being revitalised to a budget of $92 million • Fremantle’s Northbank village proposal includes a waterfront boardwalk, marina, hotel, shops, restaurants and housing designed by six firms of architects.

Fingernail biting in Brisbane’s big practices as the new state government audits its predecessor’s ambitious program of health projects. But project directors are being appointed for the main jobs signed • The Queen Adelaide Building, on the old Myer site, has reopened after a $40 million retail refurbishment designed by  The Buchan Group  •  John Simpson , now married to  Spowers , is advising the Queensland government on designs for more developments at South Bank • The Brisbane City Council is trialling a design review panel • Brisbane’s Hamilton Cold Stores are being replaced by a $125 million terminal for cruise ships; including a hotel, office building, aquarium and Omnimax theatre. The Architects are Agenti  • Other developments approved in the council’s $4 billion urban renewal program include a mixed development of the Carlton site at Market Street and Kemp Place and a residential project on the Paddy’s Market site at Teneriffe. Priorities now are to declog city roads and resolve a plan for Bowen Hills •  Noel Robinson’s Australia Pacific Design Group  is designing Japan’s tallest tower for Osaka • Health specialist  Warren Kerr  has decamped from Perth to Brisbane to set up a national “centre of excellence” in health building design; sponsored by  Cox Architects  and  McConnel Smith & Johnson , involving the state government, universities, the RAIA and the American Institute of Architects, and draining the brains of visiting US experts.

Model shots of the Hamilton Cold Stores proposal for Brisbane, by Agenti.

RMIT’s Professor  Chris Ryan  is chairing a think-tank of designers (including  Neometro ,  Michael Trudgeon  and engineer  Anthony Kitchener ) designing a pavilion for the proposed  Home of the Future exhibition planned by the Forté Group for Melbourne’s Home Show this year and Sydney’s in 1997 • The University of Melbourne has introduced a new masters course in urban design. Also, the architecture faculty’s Professor  Haig Beck  is reviving with  Jackie Cooper  their publication  UME  as a more marketable quarterly emphasising drawings • Melburnians have voted against RIBA Gold Medallist  Harry Seidler ’s proposal and convincingly favour the scheme by RAIA Gold Medallists  Denton Corker Marshall  for the Melbourne (“world’s tallest”) Tower, after an exhibition of both proposals •  The Age  has published letters supporting  Norman Day ’s criticism of olde worlde new buildings • The Victorian government will invite overseas and local designs for a Federation Square replacing the doomed Gas and Fuel towers • The 1956 Olympic village at West Heidelberg is to be rejuvenated •  Denton Corker Marshall ’s Museum of Victoria design includes a blade which could obscure the dome of the historic Exhibition Building. In a letter to  The Age , architect  Michael Jorgensen  described this element as “a fascist salute” •  The Buchan Group  have master-planned a $50 million proposed redevelopment of the Victorian Arts Centre.

Full praise for Adelaide from visitors to Barrie Kosky’s Arts Festival and the RAIA Intersections conference. All noted that the Rundle Street café strip—intense footpath dining—is one of Australia’s most urbane precincts • Extensions to the Art Gallery of SA, designed by Sydney’s Peddle Thorp & Walker, have opened to a warm reception • In an interview promoting a festival exhibition of Harry Seidler’s Vienna and Melbourne Tower schemes, the Adelaide Advertiser surprisingly reported that he had resigned his Melbourne commission • Speaking at the Seidler exhibition launch on behalf of its organisers, the Architecture Foundation, John Chappel claimed it was self-defeating to ask developers to supply ideas for improving Australian cities—“they are not ideas people”.

Fabulous us: Architecture Australia now goes to the United States, Singapore, New Zealand and Malaysia and is on the World Wide Web via the RAIA?s Home Page at . Thank Bruce Duyshart and Ian Close for our good online look • The Sarabhai family in Ahmedabad, India, have offered unbuilt Le Corbusier house plans to any Australian prepared to construct here • World Architecture ranks Australian retail specialists The Buchan Group as the planet’s 13th largest architectural firm, with 300 staff • QUT’s photo-show of new sub-tropical housing was shown at the latest Milan Triennale international student-fest. 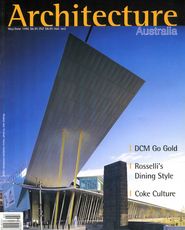