Hell of the North

For a low-key local bar and bistro in Fitzroy, SMLWRLD architects use a firey yellow and bluestone as the signature.

Timber and brass dominate the main restaurant and bar.

In an age where people collect new and socially notable food experiences like footy cards, and don’t bat an eyelid at crossing town to line up for a posh burrito, there’s something refreshing about a new restaurant that isn’t a “destination” but, rather, is pitched at locals. That this restaurant is nestled in a quiet spot just off Smith Street, the unofficial epicentre of inner-Melbourne’s foodie start-up culture, and serves delicious but decidedly off-trend French bistro fare, only adds to its refreshing, zeitgeist-flouting aura. Peoples of Fitzroy and Collingwood, bienvenue à Hell of the North – your new local!

In the days before Smith Street pulled on tight jeans and grew a moustache, Hell of the North was Lambs Go Bar – a place years ahead of its time in embracing craft beer but underwhelming in terms of interior architecture. The transformation effected by architect Lucas Chirnside and artist Bianca Looney, partners in multidisciplinary design firm SMLWRLD, is startling; a dingy, compartmentalized urban bolthole has become a sophisticated, welcoming bar and bistro.

SMLWRLD’s most impressive achievement here is the architectural reconciliation of the original building on site, a nineteenth-century bluestone hotel, with the aesthetic and utilitarian demands of a modern restaurant. The heavy stone walls of the old hotel might have dominated the place, but instead have been integrated into a series of thoroughly contemporary interior spaces, each with its own character.

The ground floor of the original building accommodates the restaurant and bar, and it’s here that the materials palette – a key to the success of the fitout – is established. Warm timbers have been selected for the bar, joinery and furniture; burnished brass fixtures evoke a sense of the classic French bistro; and steel posts and beams, which hark back to the burgeoning industry of the original hotel’s heyday, have been given a black gloss finish to ensure that they aren’t too “industrial.” The predominance of timber is particularly effective: its warm, natural tones announce the informal nature of the place while offsetting the cool, looming mass of the bluestone walls, and the lack of detail in the woodwork provides a clean, smooth counterpoint to the rough-hewn stone. The bright yellow front door, always left open, adds a flash of primary colour, and a wall painted midnight blue picks out the natural hew of the bluestone, enlivening the entire room.

The rest of Hell of the North occupies spaces that butt up against the exterior of the bluestone walls. The Press is a private dining room inspired by a French wine press – timber battens applied to walls and ceiling describe a vaguely 1980s-style geometrical pattern and create the feeling of sitting inside a basket or barrel. At one end of the room, a pre-existing archway into a small outdoor courtyard has been glazed, providing a telescopic view to the outside and, during the day, admitting a wash of natural light.

A third interior zone, a small cafe area adjoining the kitchen, is demarcated simply by a white stripe of ceiling and white tiled wall. It also opens onto the outdoor courtyard and, during the day, the white surfaces reflect the light and illuminate the interior. The character of this space is lighter and more casual than the rest of the establishment, but still very much a part of it. The bluestone walls ensure a sense of continuity and a large window provides a view back into the restaurant and bar. The glass has been removed and the deep window sill, clad in timber, becomes a kind of shared bench seat at the threshold between the two zones. Patrons in the café area can also catch a glimpse of activity in The Press through a narrow open doorway.

The sense of visual connection is reinforced by a thin strip of blue applied to the ceiling, tracing the outer edge of the bluestone walls as they pass through each space and encouraging visitors to step back and appreciate the history of the old pub. This blue “moat,” along with details such as the battens in The Press and light fittings handmade locally by Volker Haug, show the value of SMLWRLD’s collaborative, art-meets-architecture approach to design. Working closely with the clients (in particular Adam Ferrante, founder of Rose Street Artists’ Market) and graphic designers Urchin Associates, SMLWRLD has, from a series of seemingly disparate spaces, created a singular place. It is at once modern and reverent of history, and promises to outlast foodie fads for some time to come.

Hell of the North.

Hell of the North 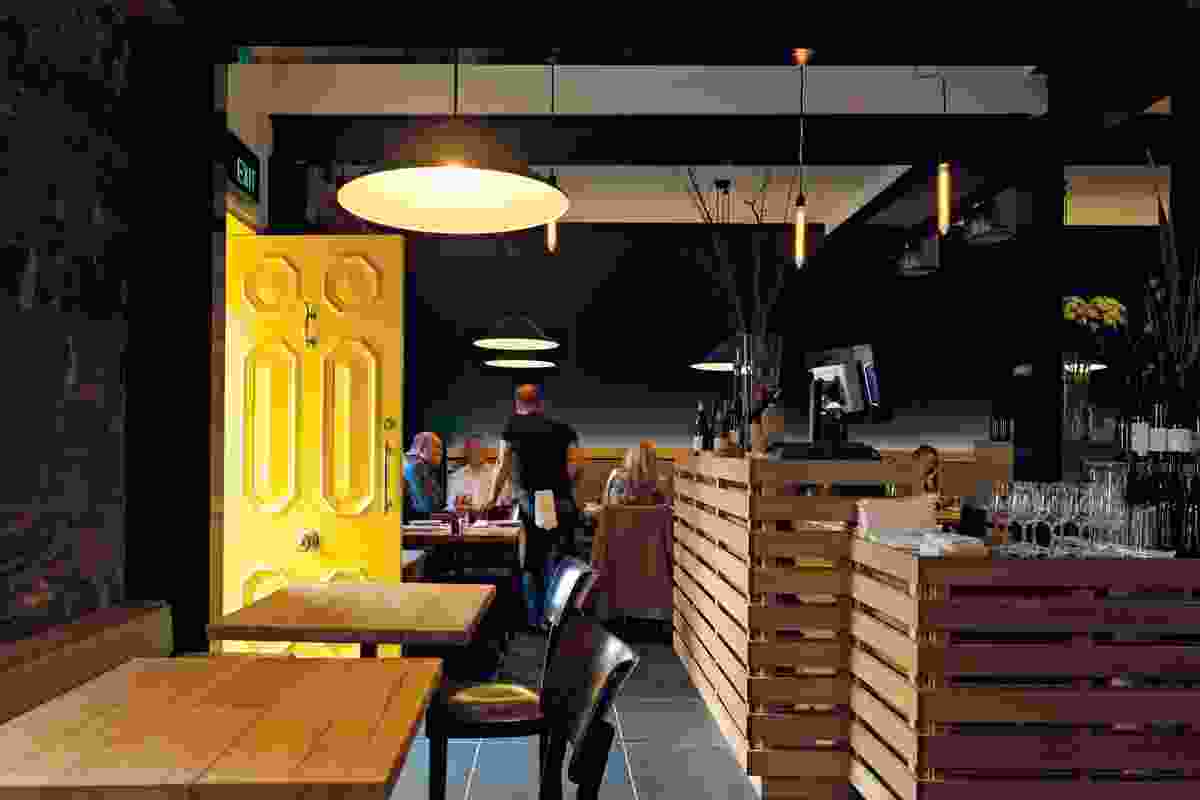 Timber and brass dominate the main restaurant and bar. 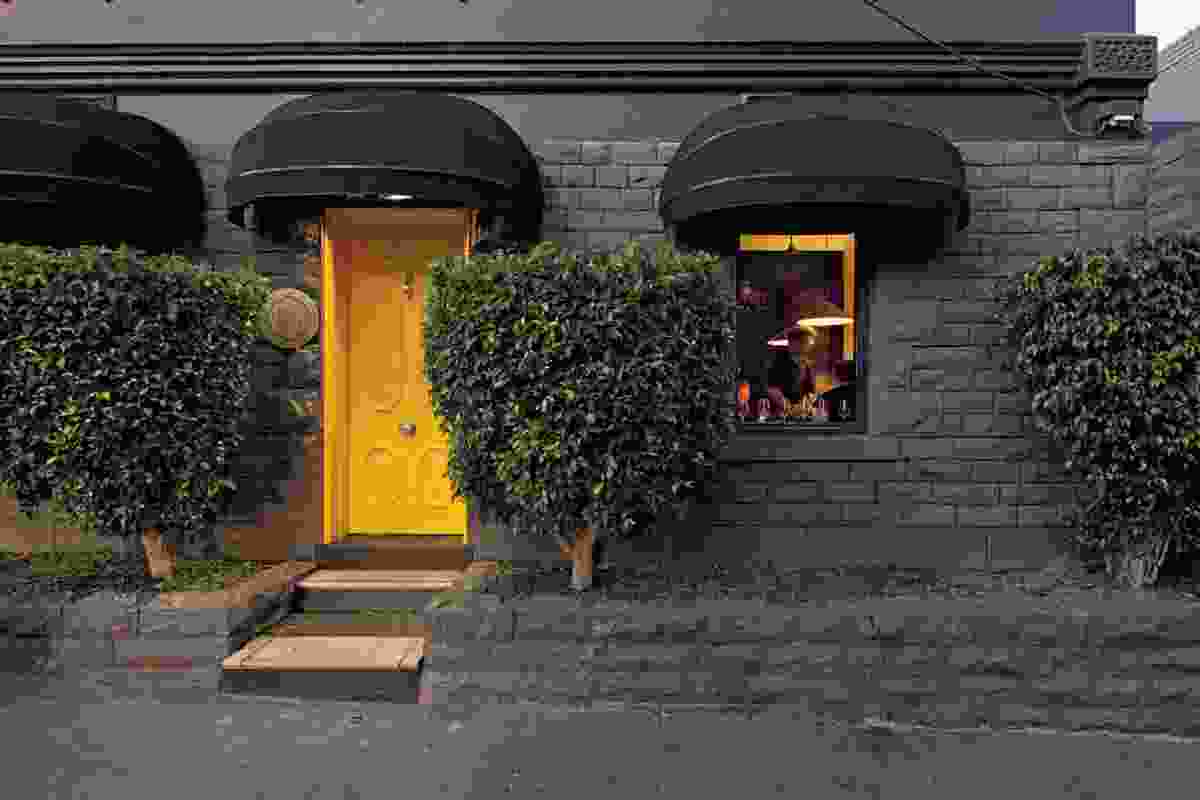 Bluestone from the original 19th-century hotel has been retained. 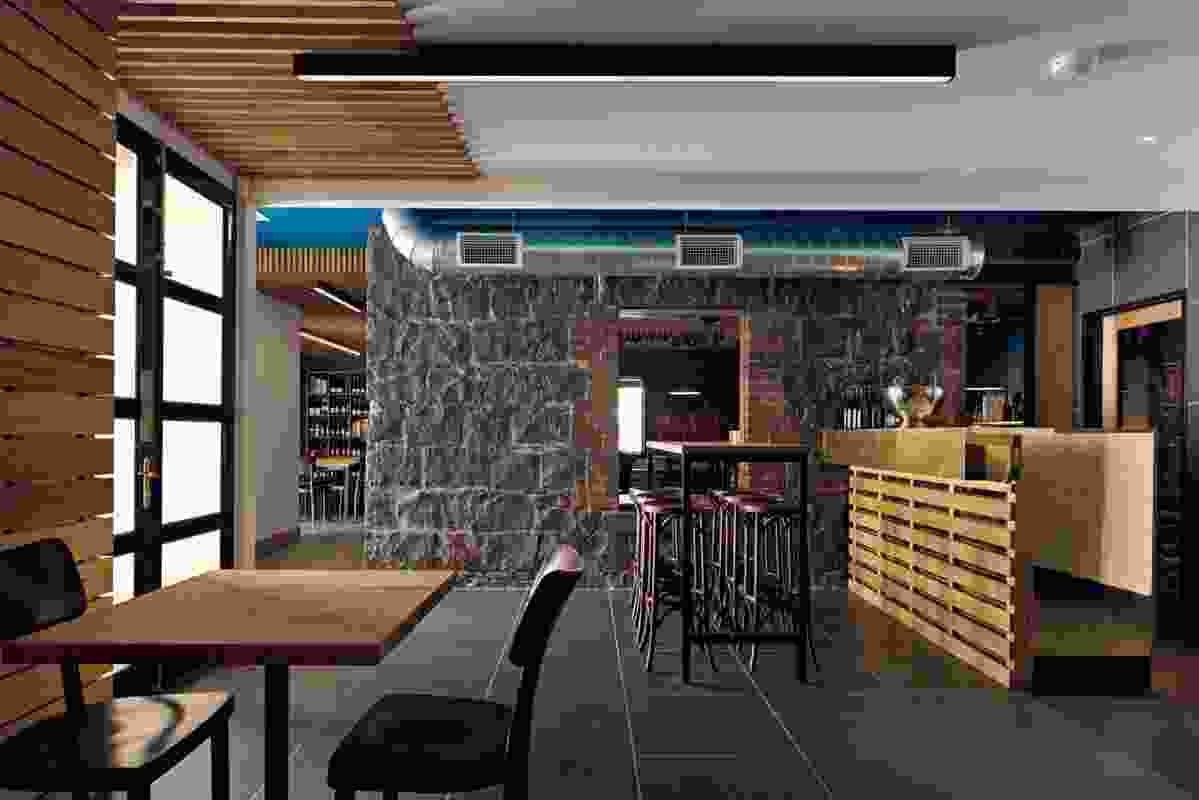 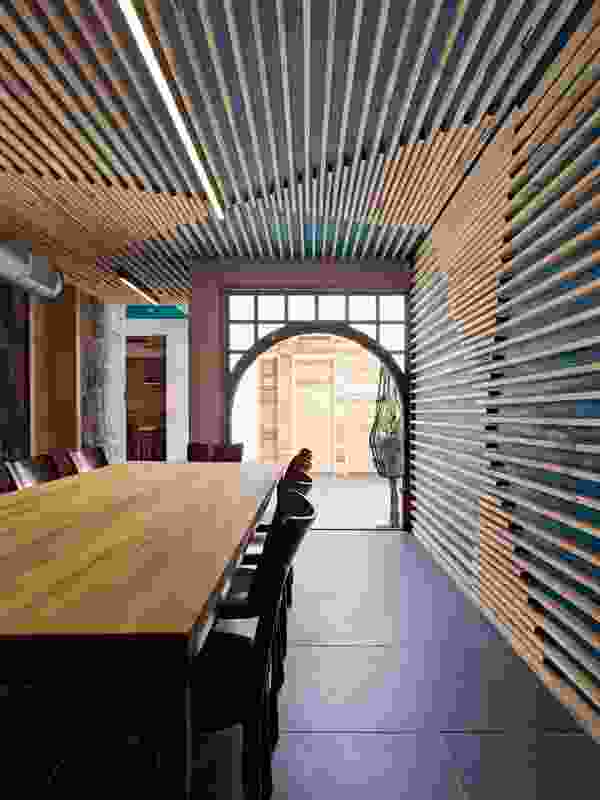 Timber battens line the walls of the private dining room, The Press. 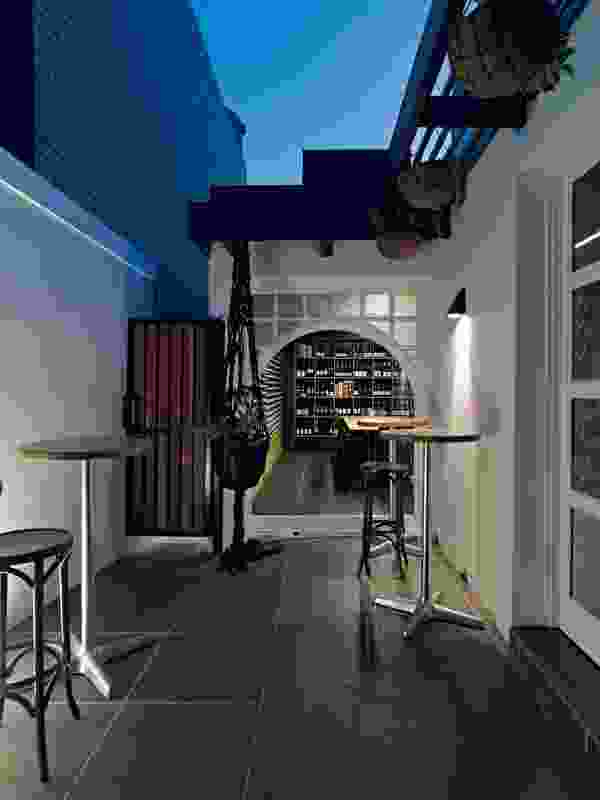 A view from the courtyard to the private dining room.