With an established confidence not expected from the street, this bold extension to the back of a 1930s home by Freadman White offers a rich spatial experience.

While the addition contrasts with the existing dwelling in material and tone, it is not obtrusive and grows sensitively taller at the rear.

A dark form rises discreetly behind the white rendered facade of a 1930s Elsternwick house. The addition to the single-storey dwelling becomes known only as you walk down the driveway toward the front portico, where it appears to symbiotically attach itself to the old. The new form contrasts with the dwelling in material and tone but surprisingly it is not obtrusive – it feeds carefully into the house at the front, growing sensitively taller at the rear.

Soon after they purchased the home, the clients for Hoddle House contacted Freadman White with a desire for it to be renovated and extended, to cater to the needs of their growing family. Having just made a significant purchase, they had a justifiably modest budget, and the area for potential new works was confined to the 150 square metres of backyard. With two young children (and the possibility of more), it was essential that both the existing and new spaces were planned to make efficient use of the old while achieving greater volume within the addition.

Freadman White directors Ilana Freadman and Michael White began by modestly replanning the existing house, making minor amendments where necessary. They turned a second living room at the front of the house into a main bedroom and ensuite, locating all four bedrooms within close proximity. An existing bedroom was turned into the main bathroom, with robes and joinery redistributed where needed. Other existing elements throughout the house have been maintained, referencing the period of the home and its inherent character. Cornices, ceiling roses and joinery handles have been kept, as well as a glass pendant, which was relocated to the entry to become a feature light. Walls were repainted and new carpet and floorboards laid to create continuity between the volumes.

At the point of transition, the extension blends seamlessly with the existing dwelling, blurring any perceived lines of change. Moving through the corridor, with its original low-lying ceilings overhead, you pass the replanned laundry and pantry service areas before entering the bold extension in a celebration of scales. The kitchen is tucked beneath the canopy of the existing ceiling. Across the entrance to the passage, the main living space is modestly defined by a low line of oak joinery that hugs the corner of the room, inviting living room furniture to gather around. It’s at this point that the soaring height of the raked white ceilings is first revealed.

Above the lines of the ordered living and kitchen joinery, a lofty display of pristine planes soars upward in a series of dramatic angles and junctions that slip carefully past adjoining surfaces. Deep-set cedar-framed windows punctuate the clean plasterboard surfaces and frame views of the landscape and activity outside, while inviting long beams of sun into the living room across the day. These windows and sliding doors offer both visual and trafficable connections out to the yard. A child-sized sliding door offers external access via a rumpus located at the end of the extension, off the dining room. Designed as a second private living room or an extension of the dining area, this space is malleable and responds to the clients’ changing needs.

Appearing as an extension of the timber floor, a deck is nestled in the corner between the living room and rumpus, creating a threshold to the lawn. It’s from this grassy plane that you can stand back and marvel at the most private of elevations, tucked within the boundaries of the neighbouring fences. Large expanses of glass, both fixed as pop-out windows and sliding within wide timber frames, perforate the black brick surface in an assorted play of scale and diverse proportions. Here, the importance the architects have given to the spatial experience becomes obvious.

Extensions to residential architecture could be sorted into two categories: those that make attempts to camouflage their existence by means of imitation, and those that take stock of their context but seek out alternative yet complementary forms, nurturing a harmonious union. Hoddle House is of the latter. Although externally it is vastly different from the original dwelling, its contrasting form, tone and aesthetic show an appreciation for its context, from which it seems to take cues on height and pitch. It is calm yet bold, with an established confidence not expected from the street elevation. It is an alluring signal toward opportunities in residential architecture that are not always made apparent.

Other
Custom-made joinery and sliding partitions 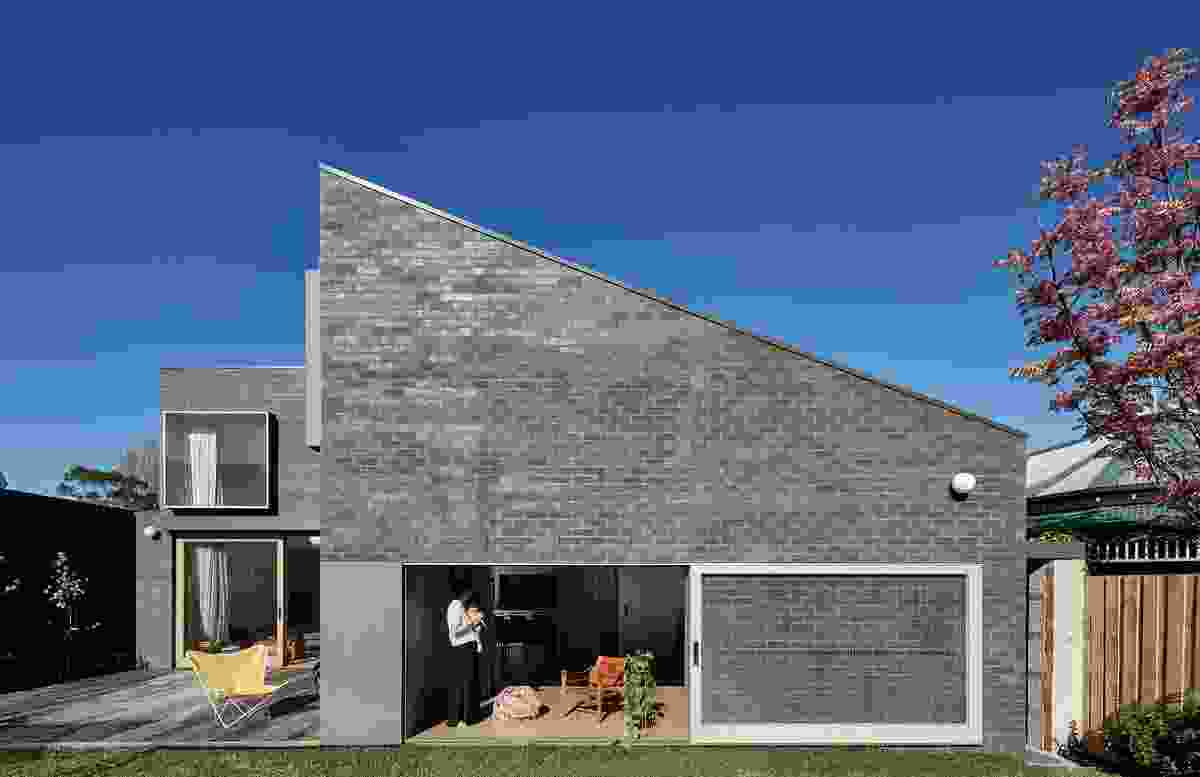 While the addition contrasts with the existing dwelling in material and tone, it is not obtrusive and grows sensitively taller at the rear. 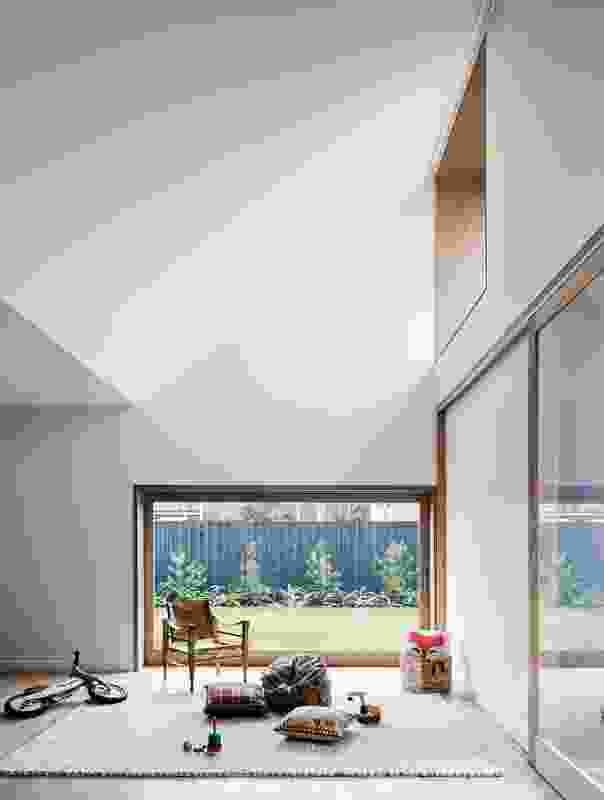 Under the dramatic folding ceiling, an almost child-sized sliding door offers external access to the rumpus, a space easily adaptable to the clients’ changing needs.

A sunny deck sits between the living room and rumpus, visually extending the timber floor and creating a threshold to the lawn. 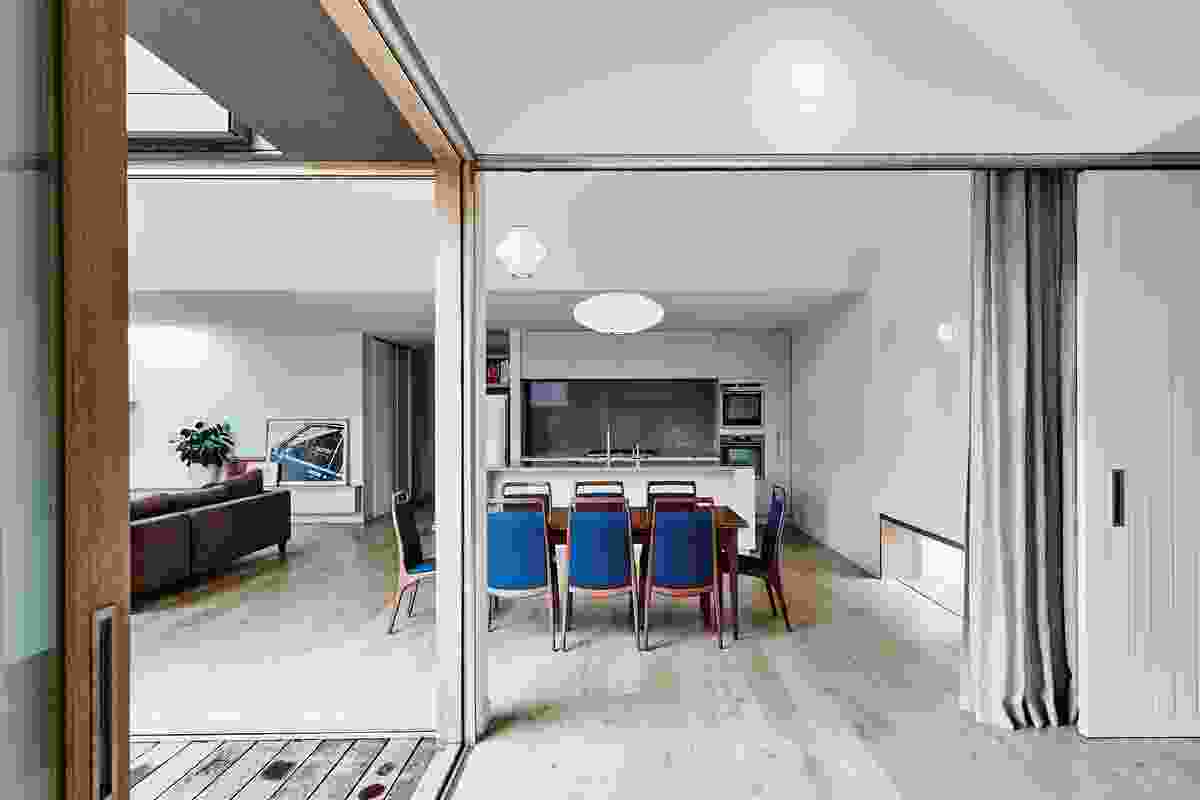 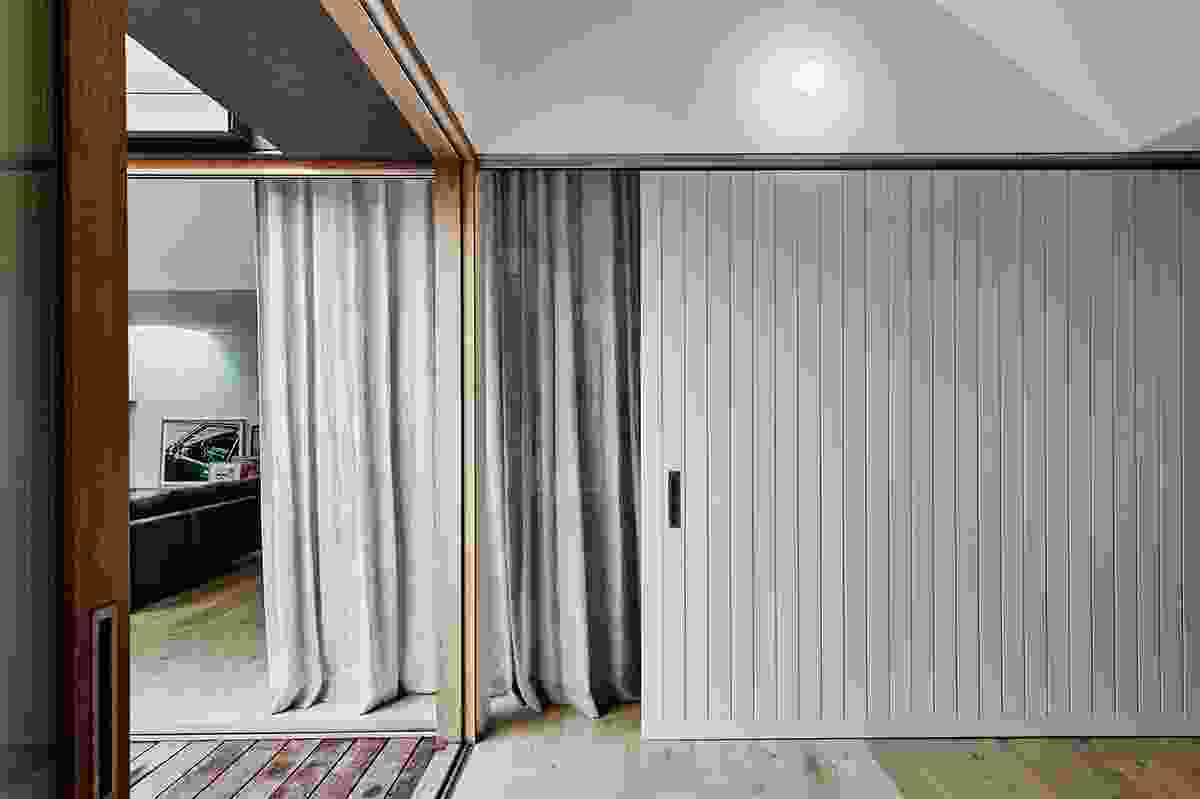 Flexibility is inbuilt into the extension, with different levels of separation between spaces provided. 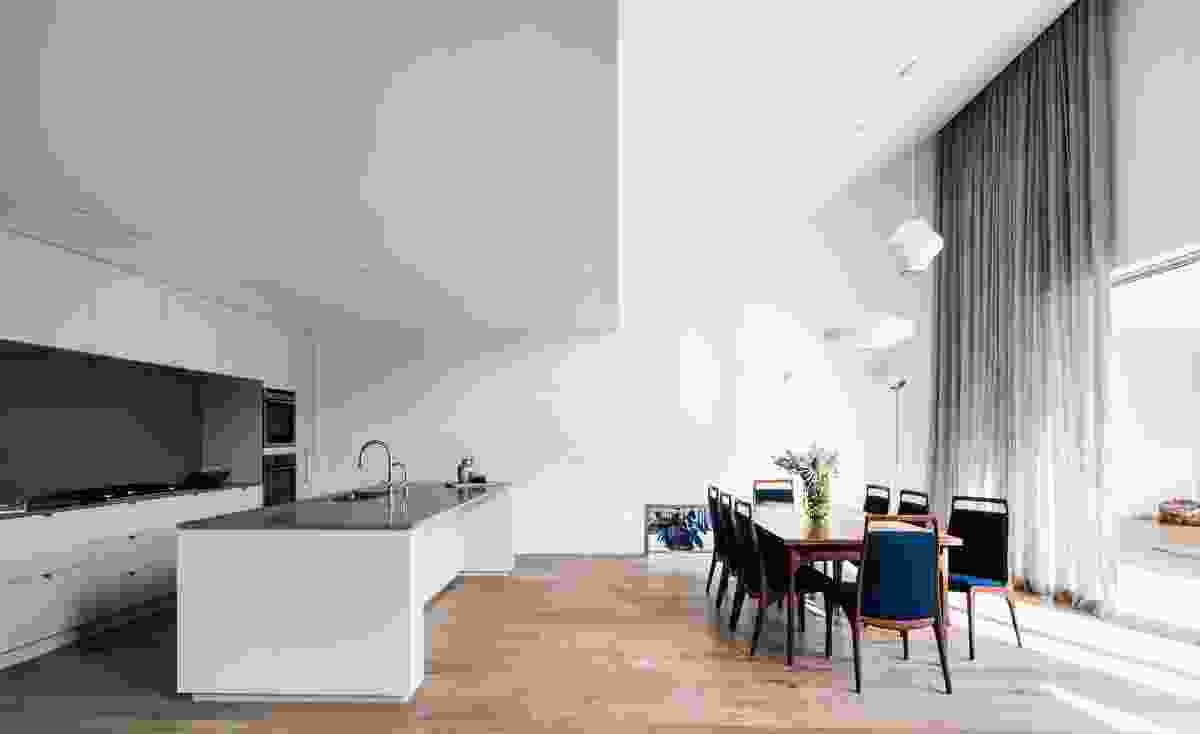 The kitchen is tucked beneath the canopy of the existing ceiling, a more modest, cosy space than the new volume. 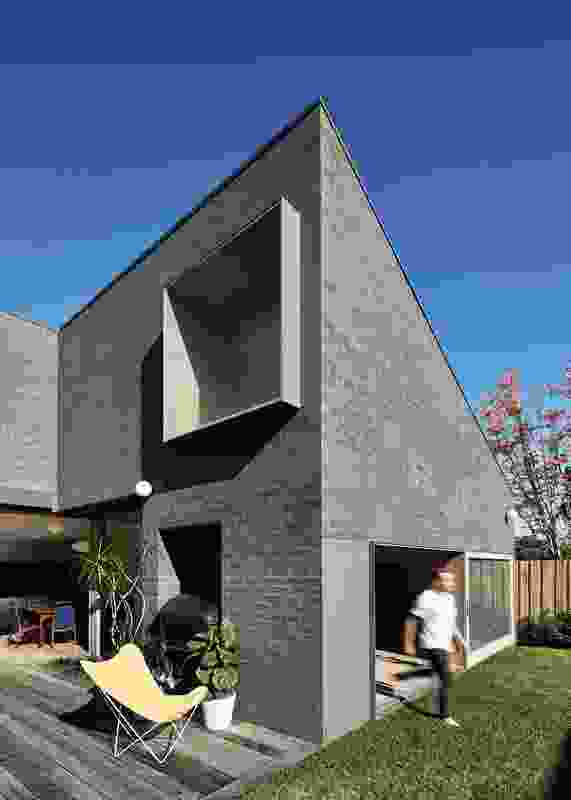 An array of pop-out windows and sliding glass doors in wide timber frames perforate the black brick exterior, playing with scales and proportions. 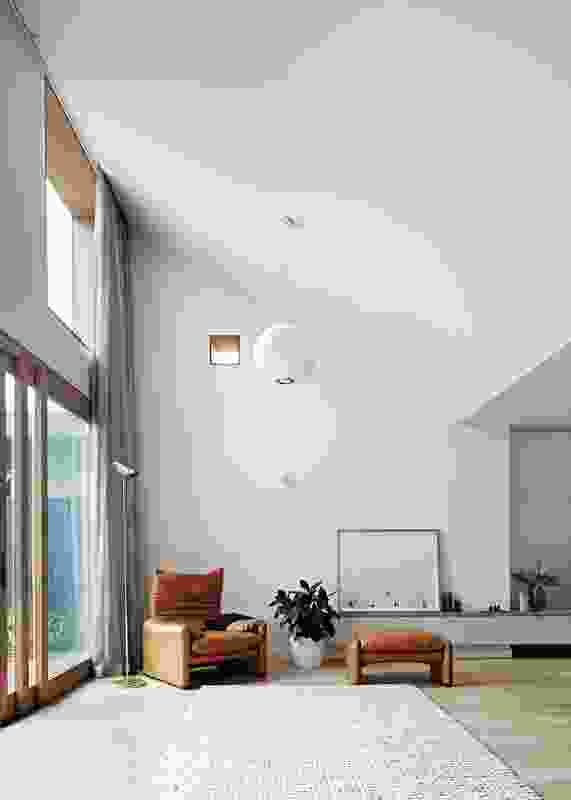 In the kitchen and living areas, lofty ceiling planes create a series of angles and junctions. 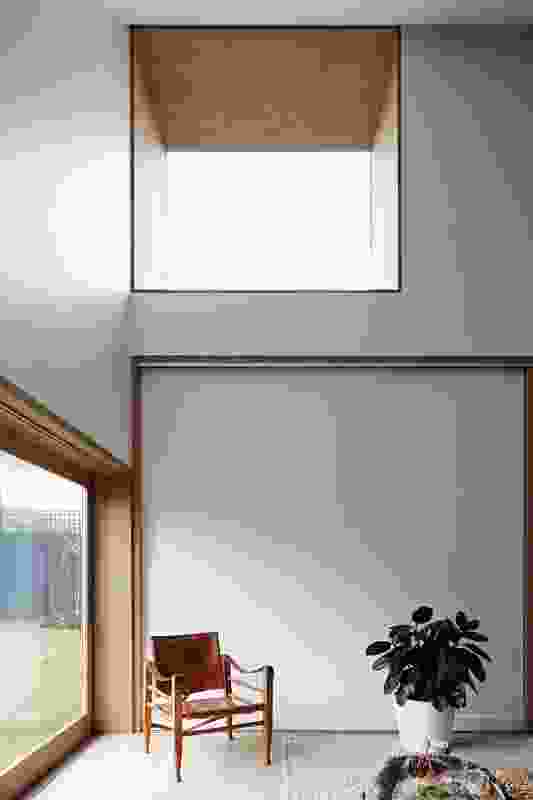 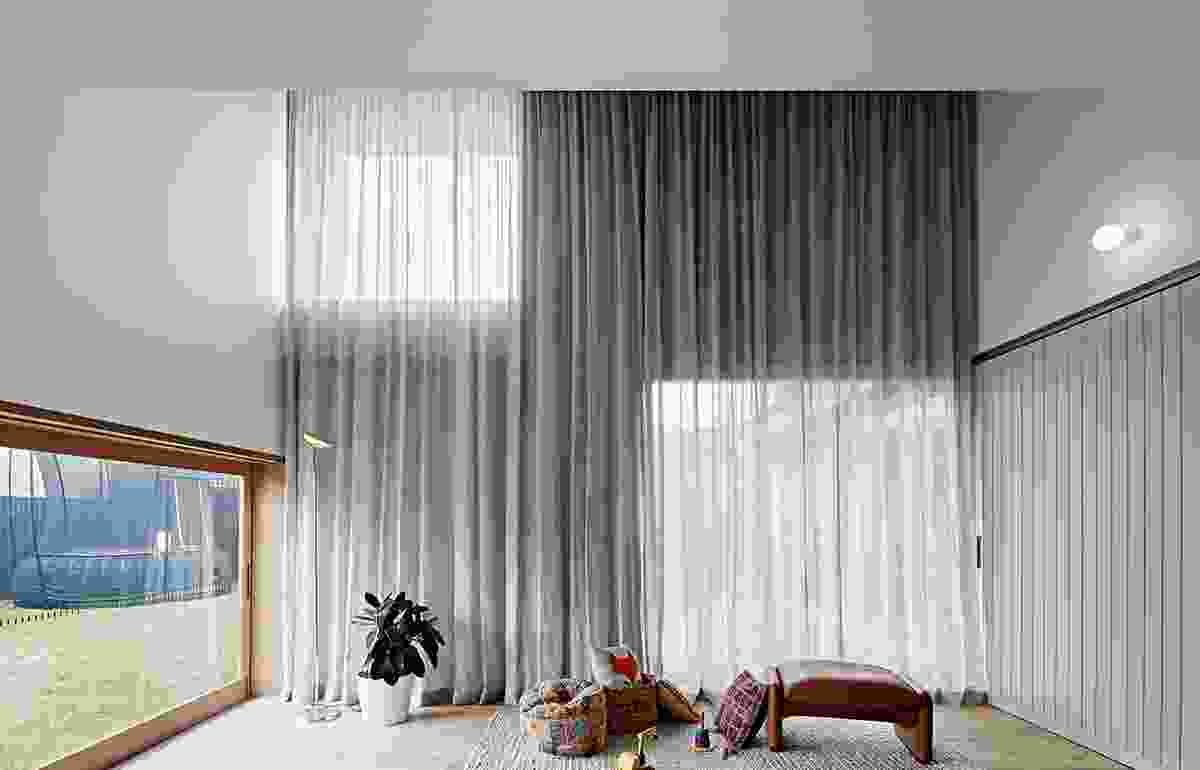 All spaces are malleable and respond to the clients’ changing needs. 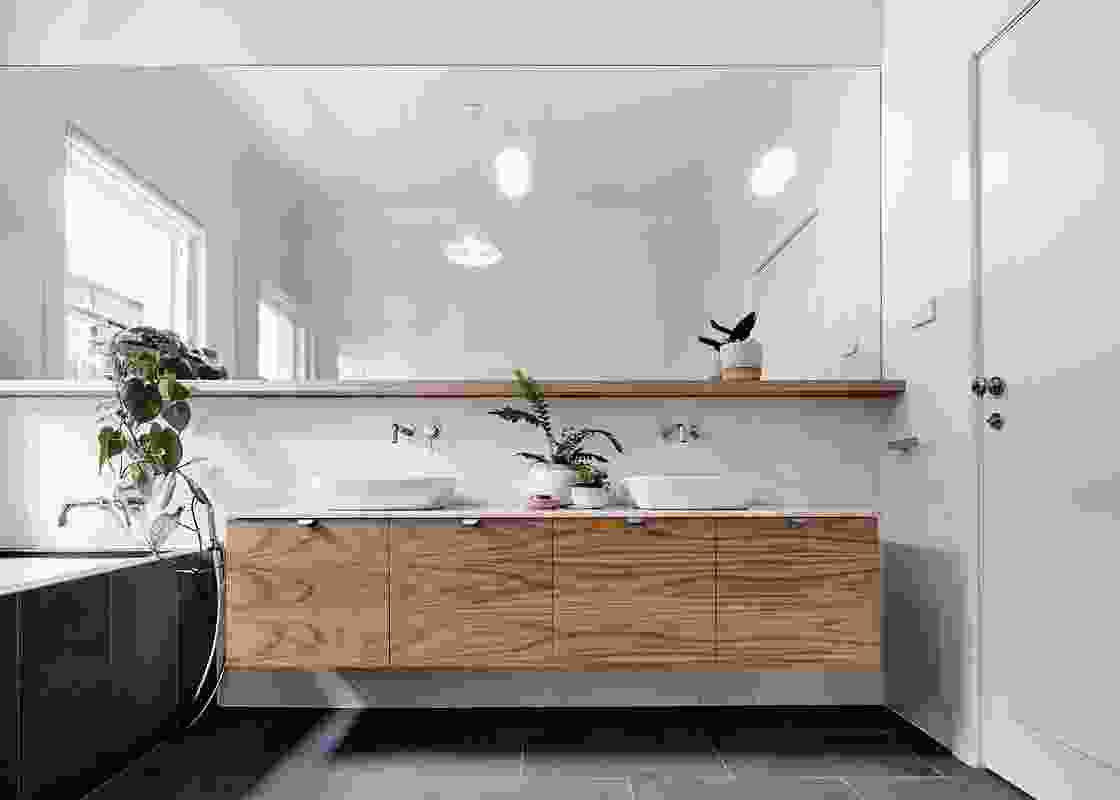 Cornices, ceiling roses and joinery handles have been kept at various points throughout the home, referencing the period of the dwelling and its character.