Hospital and health design, at once individual and collective

As part of Architecture Australia's May/June 2015 Dossier on health architecture, Michael Keniger reports on the state of healthcare design and offers an overview of recent healthcare projects.

The South Australian Health and Medical Research Institute by Woods Bagot is co-located with the new Royal Adelaide Hospital.

Over the past two decades, there has been a rapidly rising level of investment in healthcare and health facilities across Australia and architectural design has proven to be a valuable factor in the improvement of the delivery of healthcare across all scales of development. The relentless need to renew and upgrade existing health facilities has been matched by the demand for a significant number of additional and seemingly ever larger and more complex acute-care hospitals. This demand has been driven by the increase in population numbers and by changes in underlying demographics, primarily an ageing population, with a related increase in the incidence of chronic diseases. It is anticipated that investment in health-related capital works over the next decade is likely to be in the order of $20 billion, with the source of funds diversifying as major projects are likely to be delivered through public–private partnerships and to involve co-investment with private health providers and with universities conducting medical training and health-related research.

The design challenges are significant because of the complexity of the intersecting demands of medical specialities and the expectations of patients and staff alike for high-quality healthcare. Architecture continues to be positioned as the leading discipline throughout the design and development stages of most of the major projects, despite the increased reliance on prescribed organizational patterns and layouts determined largely by reference to best practice and by management efficiencies. This overview examines a selection of recent and soon to be completed projects for health facilities to highlight key aspects for the future and to note where architectural design and leadership have made a contribution.

A significant change seen in the current generation of acute-care hospitals is the increasing proportion of bed spaces that are in single rooms, which increases the efficacy of medical treatment. This advance has been driven by the application of evidence-based design, which has helped to persuade hospital agencies of the increased efficacy of care that single-bed rooms allow. The provision of individual rooms aligns with the strengthening of patient-focused care and allows a greater proportion of medical interventions to be conducted in the patient’s room. This alone enhances the quality of the patient’s experience, reduces the risk of cross infection and improves operational efficiency.

Australia’s established hospitals were largely founded in the nineteenth century. Most are finding it difficult to cope with the scale of the contemporary challenges to be met within the bounds of their existing sites, and the replacement or the relocation of key hospital elements and services has therefore become necessary.

The new Royal Adelaide Hospital (Silver Thomas Hanley and DesignInc), to be opened in 2016, benefits from the bold decision to relocate the hospital in its entirety from its existing campus east of the central city to a riverside site on its western flank. This achieves co-location with the recently completed South Australian Health and Medical Research Institute (SAHMRI). It also significantly reduces the time and cost in comparison with rebuilding on the existing campus and provides greater room for expansion. The relocation will enrich Adelaide’s riverside precinct while benefiting the city’s core by enabling its existing site to be repurposed and capitalizing on its location immediately adjacent the Adelaide Botanic Gardens. It will be the first major public hospital in Australia with 100 percent single patient overnight rooms, many of which will have riverside views.

In contrast, to overcome the difficulties and inefficiencies of its inner-city campus, the Royal Hobart Hospital initiated a masterplan to guide the progressive redevelopment of the site, contingent on the receipt of future funding. The masterplan incorporates current best practice medical-care models and provides for future growth and change. Lyons assisted with this process. The new ten-storey inpatient facility, the first phase of the masterplan, is scheduled for completion in 2018. The proposed design accepts the responsibility of projecting the hospital as a definitive public institution through assertive elevations of tessellated and seemingly pixelated projecting bays that the firm suggests recall something of the Rajah quilt made by convict women during their transportation to Hobart in 1841.

This vigorous approach to declaring a hospital’s civic presence and public role in its urban setting also characterizes Brisbane’s Lady Cilento Children’s Hospital (Conrad Gargett Lyons), which opened in 2014. The migration of the Royal Children’s Hospital from the densely crowded Royal Brisbane Hospital site to merge with the Mater Children’s Hospital in South Brisbane has created a large-scale development highly visible from Brisbane’s CBD. The jaunty colouring of the shading fins and the projection of the key public hallways out and through their screening layer provokes curiosity and extends some of the lighthearted exuberance of the nearby South Bank parklands.

Similarly, the existing Princess Margaret Hospital for Children in Perth is to be relocated to the Queen Elizabeth II Medical Centre (QEIIMC) Nedlands site as a key element of the first phase of the QEIIMC masterplan. The new Perth Children’s Hospital (BCJH Alliance comprising JCY Architects and Urban Designers, Cox Howlett and Bailey Woodland and Billard Leece Partnership with HKS Inc. Architects), to be opened in late 2015, has a prominent location overlooking Kings Park. Its budget of $1.2 billion is similar to that of the Lady Cilento Children’s Hospital and the hospital will provide a similar scale of healthcare services as Melbourne’s Royal Children’s Hospital, which opened in 2011. These are three extremely large projects and their scale is partly governed by the increased access to co-located medical disciplines and the efficiencies inherent in a centralized health delivery model. Establishing a refined scaling of space and form to meet the needs of the children being treated in these facilities seems best achieved by the ordering of the key public spaces within their bulk rather than expressive gestures that shape or mask their form.

The Sunshine Coast Public University Hospital (Architectus and HDR Rice Daubney), located on Queensland’s Sunshine Coast, is, like the Fiona Stanley Hospital in Perth, of an equivalent scale to the major urban hospitals and yet answers to a different responsibility in that it will be the largest single public facility in its region. The relatively low density of the Sunshine Coast and its hinterland means there is no single, dominant urban centre and the new hospital will inevitably provide a centre of gravity for future development. Due to open in 2016, the hospital will be of a size to meet the developing acute-care need of this rapidly growing region. The hospital’s design will harness the essence of the Sunshine Coast’s culture and environment with generous garden courts and open terraces providing patients with access to the coastal setting. These key strategies were locked into place early in the design process so as to withstand the rigours of value management.

Scheduled for completion in 2018, the 488-bed Northern Beaches Hospital (BVN), located at Frenchs Forest in New South Wales, will provide an equivalent resource to service the needs of the coastal townships north of Sydney. Its site capitalizes on access to existing highway connections, but even so additional infrastructure is planned in response to the projected traffic flows generated by the hospital. Despite the seeming convenience of access, particular care is being taken during the design stages of the hospital to cater to the nature of the hospital’s workplace environment. Significant numbers of highly qualified staff need to be attracted and retained.

Answering to quite different design drivers, the highrise Ng Teng Fong General Hospital (Studio 505), currently under construction in Singapore, divides its inpatient accommodation between airconditioned towers for private patients and naturally ventilated blocks for public patients. Ironically, the public patients are likely to benefit most as the serrated plan of the wards provides each bed space with its own window. Similar to the vertical gardens that feature on some of Singapore’s commercial towers, cantilevered terraces with cascading greenery will provide shade and garden views to public ward patients.

Because acute-care hospitals have become more complex, it’s necessary that the designs orient visitors and patients by linking the many points of entry and destination to principal public circulation anchored by key spaces such as atriums and courtyard gardens to enhance memorability. The homogeneity of the overall hospital entity can be broken down by providing a separate and possibly subordinate character for coherent separate needs and clinics such as those for mental health and cancer.

The Chris O’Brien Lifehouse (HDR Rice Daubney) opened in late 2013 adjacent to the Royal Prince Alfred Hospital, Sydney. This private, not-for-profit cancer centre co-locates ambulatory and inpatient care with cancer research and ancillary facilities. With a principal frontage to Missenden Road, its nine storeys face east with views to the University of Sydney. A dramatic atrium at the heart of the scheme orients hospital users. The atrium is sealed with internal glazing on its upper levels, providing both acoustic separation and a measure of protection from cross infection from the various clinical and non-clinical user groups. The clarity of the organization and the sharply defined formal resolution led to the Lifehouse winning the 2014 World Architecture Festival’s award for health projects – the first Australian project to be so recognized.

A regional location does not preclude health projects from being at the forefront of innovation in terms of both medical care and advanced medical practice. The recently opened St Stephen’s Hospital, Hervey Bay (Conrad Gargett) is a private, not-for-profit hospital operated by Uniting Care Health. Aside from its architectural form and the fit with its setting, the pioneering characteristic of this scheme is that it is the first hospital in Australia to offer a fully digital environment integrating electronic medical records with imaging records and a closed-loop medications management system. The system will be accessible to local GPs and to clinicians who will be able to conduct referrals and monitor results of treatment via the network. This pilot program has been funded jointly by a major grant from the Australian Government’s Health and Hospitals Fund, by Uniting Care Health and by the software supplier Cerner. Such integrated health systems are being rolled into major hospitals including the Fiona Stanley Hospital in Perth and the Macquarie University Hospital in Sydney and will contribute to safety, efficiency and the quality of healthcare. These virtual systems will improve the safety and efficacy of healthcare while driving a quantum change in the effective management of integrated medical care. 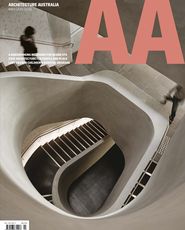 Hospital and health design, at once individual and collective 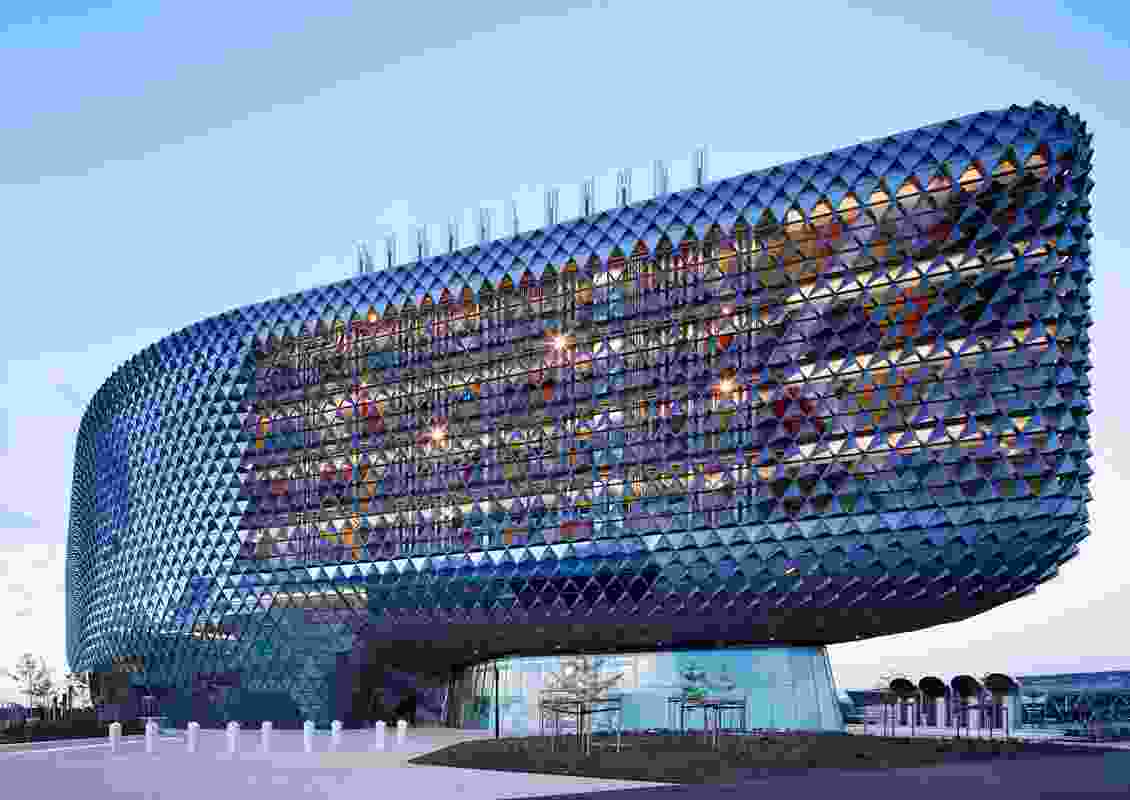 The South Australian Health and Medical Research Institute by Woods Bagot is co-located with the new Royal Adelaide Hospital. 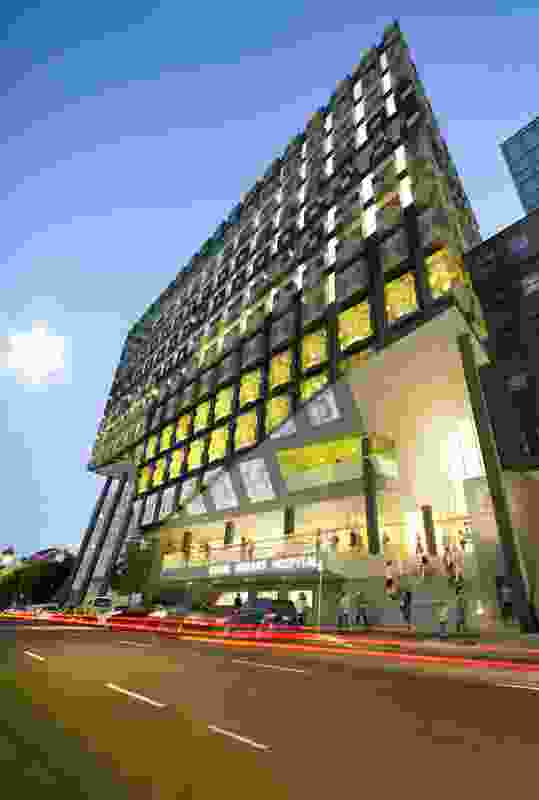 The ten-storey inpatient facility at the Royal Hobart Hospital is the first phase of redevelopment by Lyons Architecture. 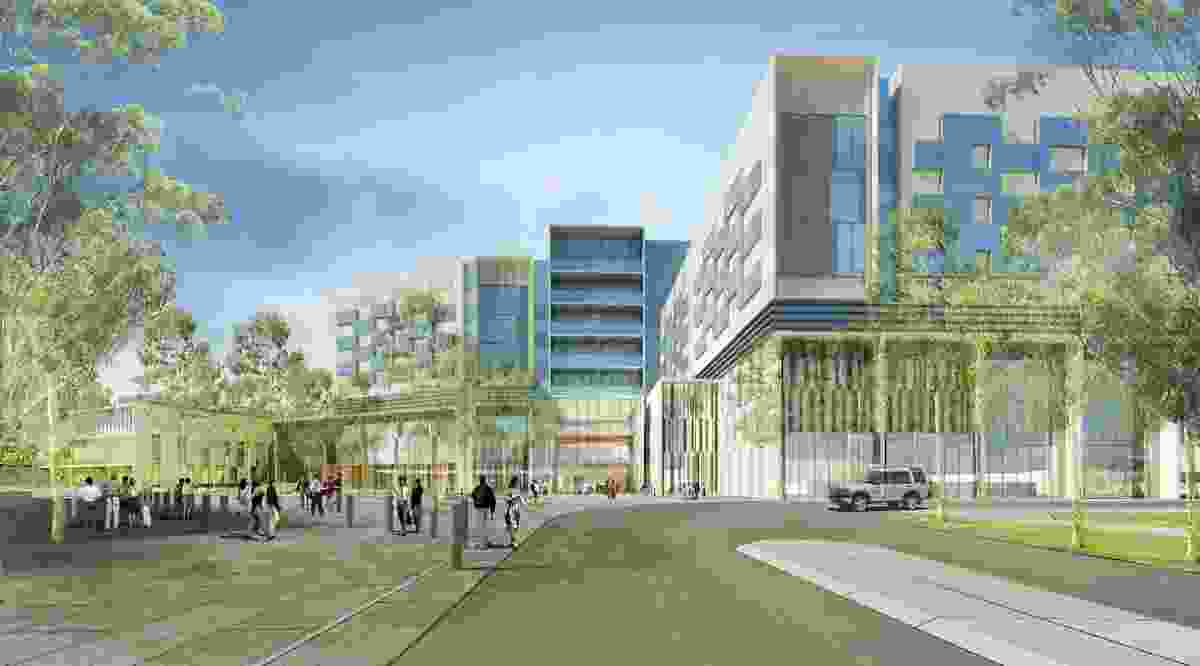 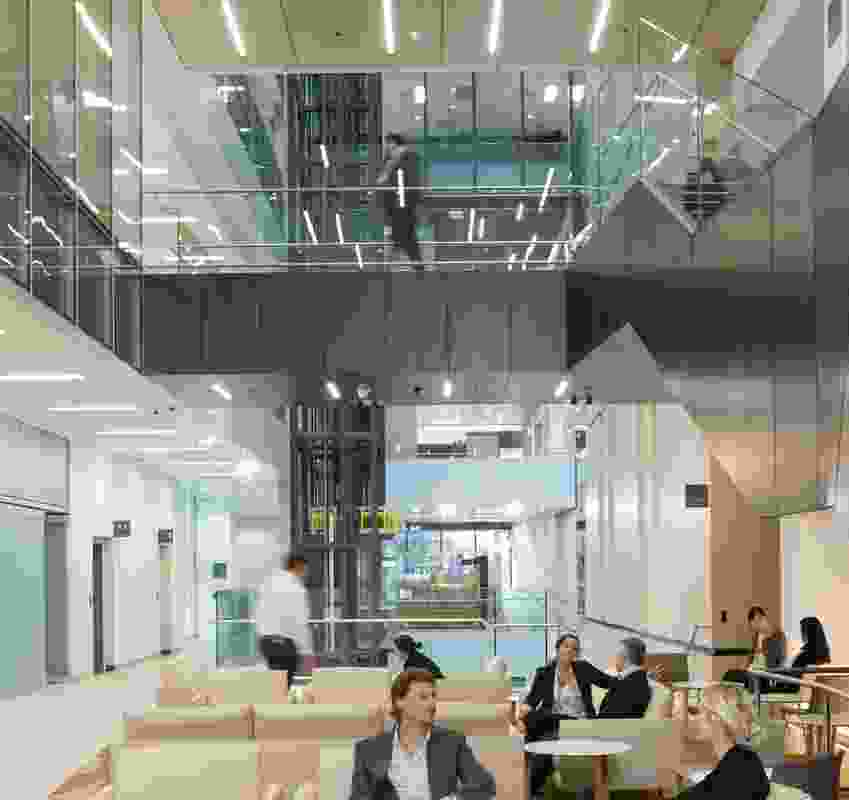 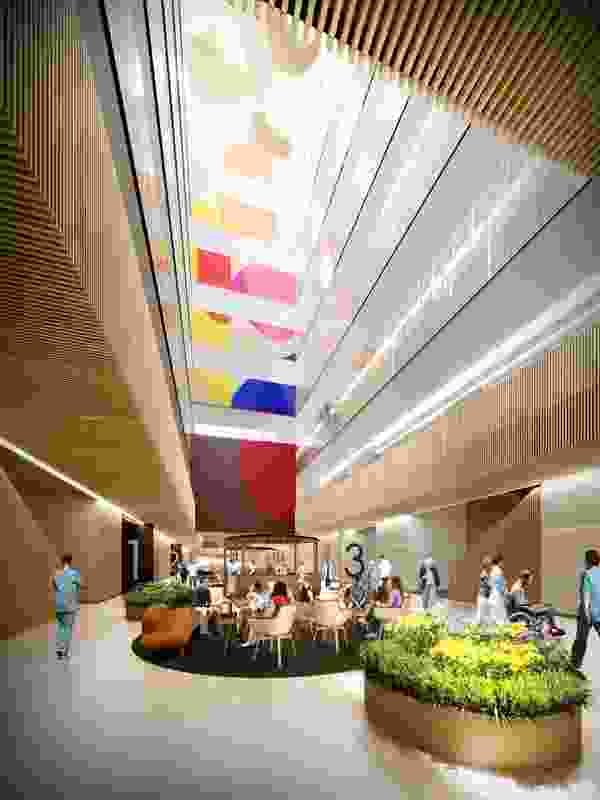 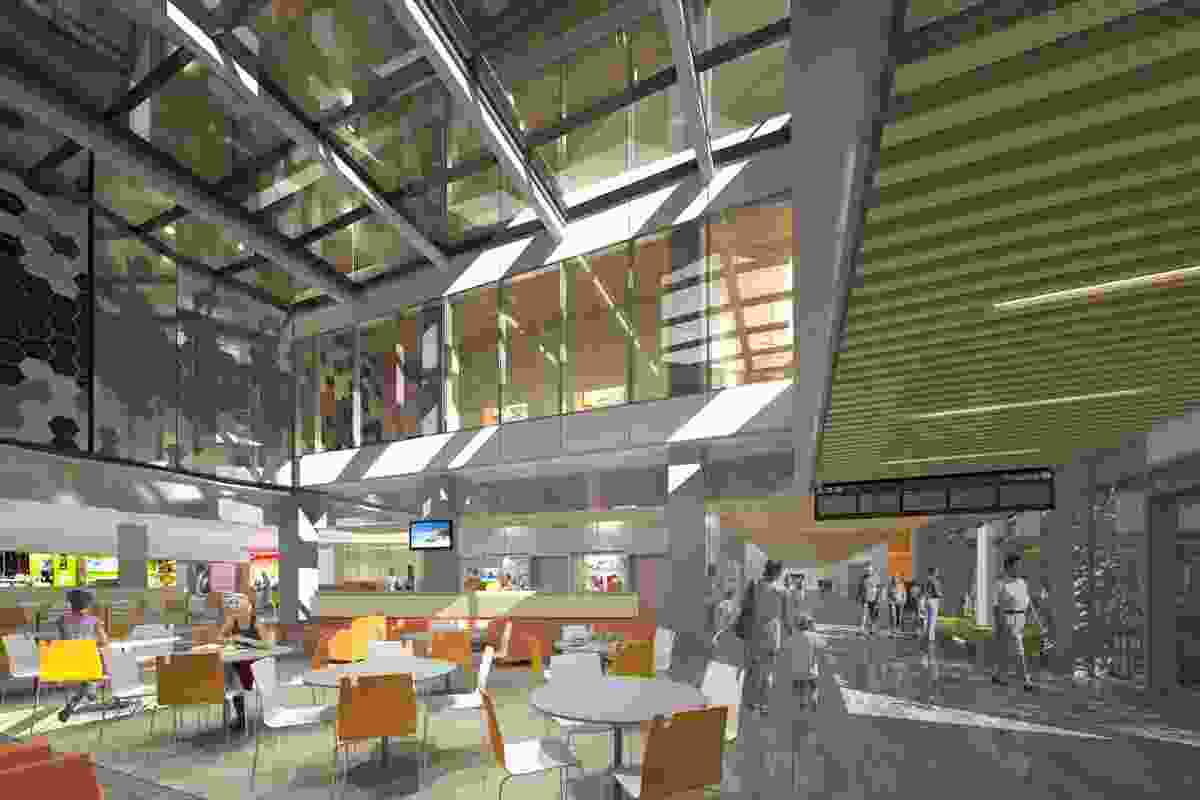 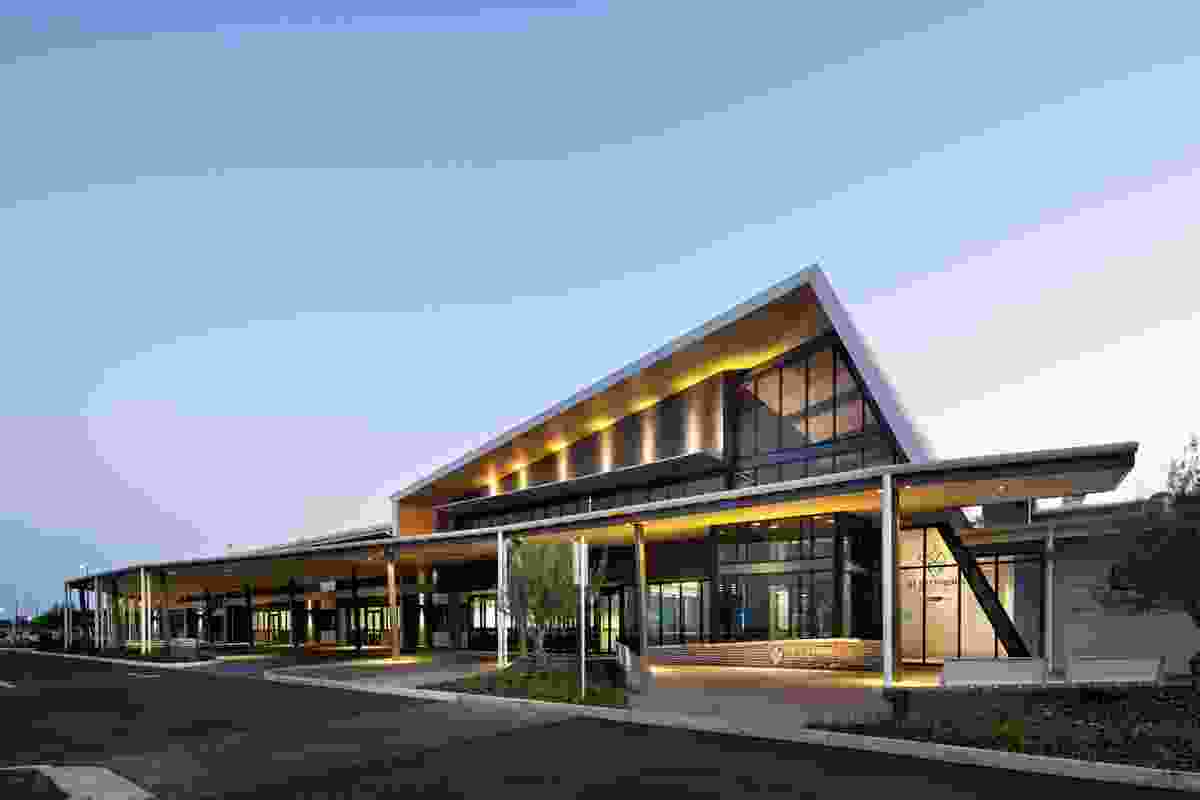 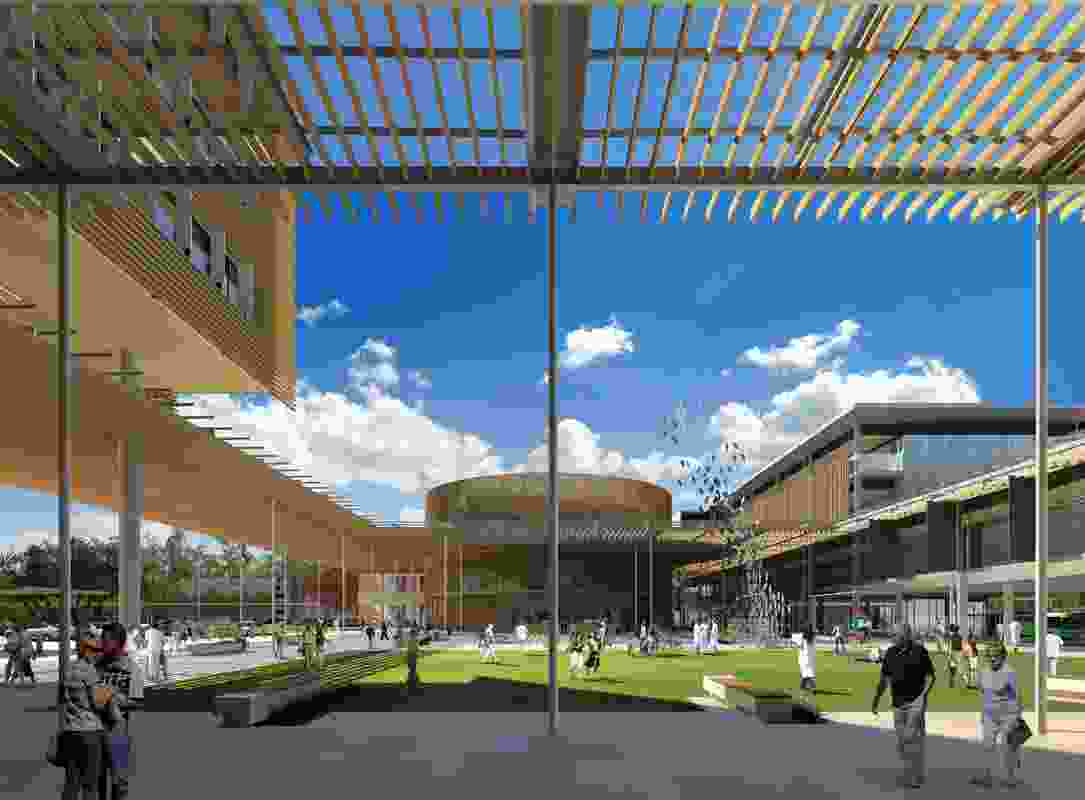