A monolithic home by Topology Studio confidently emerges from the landscape, capturing distant views to kunanyi and forging a connection to the soundscape of its surrounds.

Thanks to the active repopulation of the ground with local vegetation, the neighbouring reserve will seem to flow into the yard in time.

When a client’s love for a selected site meets an architect’s desire to make careful connections with a place, the right ingredients are in play for an imaginative design. This house, by Topology Studio, is the result of such a meeting. The clients for House at Otago Bay, located just over 10 kilometres north of Hobart, owned the site for several years before the architectural process and subsequent construction work began. They lived a little further along the Derwent River and would come to the site with their dogs to explore, enjoying the natural spoils of its location on the edge of the Derwent River and immediately adjacent to a reserve holding a freshwater lagoon. Darren Kaye and Amy Hallett of Topology Studio walked the site with the couple on a number of occasions, having speculative conversations about this place, its possibilities and the potential to work together. One of the things that convinced the clients about working with Topology was the way that Amy and Darren engaged in a continuous discussion and debate about design as part of their day-to-day life.

The first design decision for this house was how it should be placed in the ground on the steeply sloping site. The clients wanted to enjoy the gorgeous view to the river and beyond to kunanyi (Mount Wellington), but did not want to lose the sound of lapping water nearby or close views to native vegetation. So, the house fulfils both conditions, with the upper floor perched on the site, its heavy outer walls framing the view, and the lower floor bedded into the ground, offering more direct connections to the understorey and the river. This move kept the profile of the building low to reduce impact on the neighbouring house. It also enabled level access into the house from the driveway to the living space (on the upper floor) as well as to the garden from the sleeping space (on the lower floor). A series of external terraces and solid stone steps forms transition zones between these levels on the northern face of the building.

The second decision was how to shape and clothe these living levels to key into the site, protect the occupants from the weather, frame the view and offer delight. The qualities of the site reminded the architects of a small stone ruin they had seen clinging to a steep, waterfront location on the Amalfi Coast. They wanted to capture a similar sense that this home had grown out of the site. Local stone proved too costly so they undertook a careful process with local concrete-block makers to achieve just the right colour and texture for a long, shot-blasted block for the external and internal walls. A heavy colonnade to the north provides a series of sheltered, sunny dwelling spaces within the line of the building. A curving wall to the south, paired with a long arc in the roof plane, creates drama within the building. This sense is heightened as a deliberately austere entrance facade, followed by a relatively narrow entranceway, gives way to an expansive living space with lofty ceiling as you move towards the view.

To manage the conflict between protection from the elements (west sun and prevailing westerly winds) and the desire for fine river views, the architects used fixed glazing on the western facade and incorporated a large, retractable external blind. To the clients’ surprise, they use this blind as much for its capacity to transform the feel of the interior as to curb the sun. A suite of other measures are in place to ensure that this home is a haven throughout the year, including carefully designed overhangs for passive solar control, use of the slabs for passive heating and cooling, double glazing, custom lockable screens for night purging and floor planning that guarantees a sheltered place to sit outside at any time of year. Active repopulation of the ground with local vegetation provides a final layer of “clothing” for the site; eventually, the neighbouring reserve will seem to simply flow into the clients’ yard.

Amy and Darren describe the Topology Studio process as requiring at least three good reasons for any design decision, and this is apparent within House at Otago Bay. There is a careful, considered quality to this house, with little there that doesn’t need to be. Surfaces meet as simply as possible and one material plays off against another without any “noise” or trimmings in between – a quality that any design practitioner or builder knows takes work. The clients describe a sense of calm in arriving back home and, after just a short visit, I’d agree. There is an unapologetic weight to this house on the site, creating a still and very quiet space within and a protective arm around the occupants as they go about their daily activities.

House at Otago Bay is built on the land of the Muwinina and Palawa people. 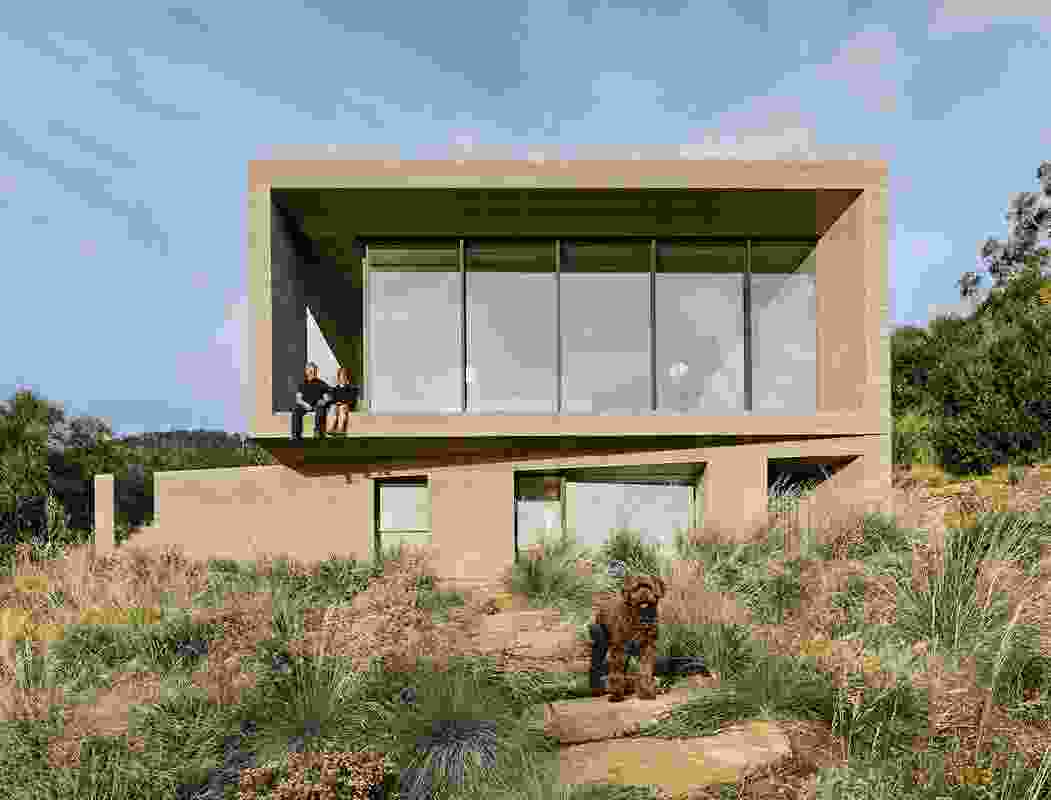 Thanks to the active repopulation of the ground with local vegetation, the neighbouring reserve will seem to flow into the yard in time. 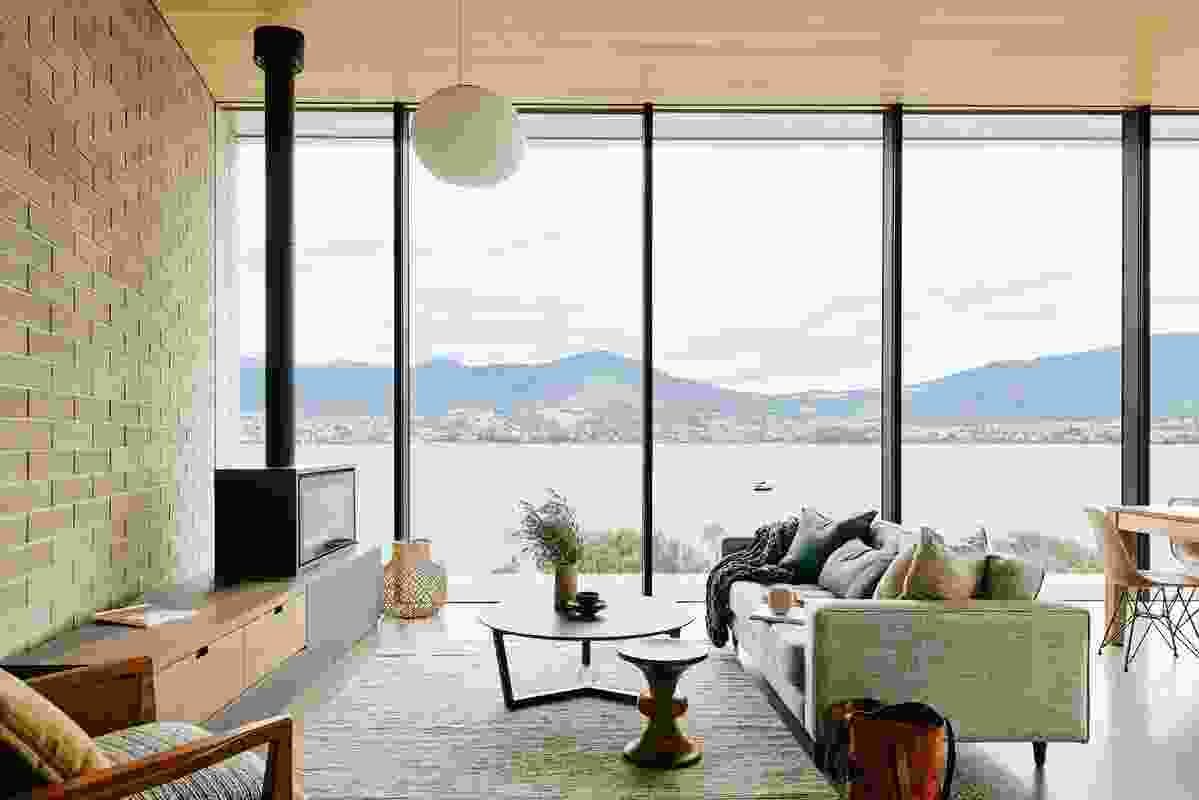 Having become familiar with the site over several years prior to building, the owners wanted their new home to celebrate the natural spoils of its location. 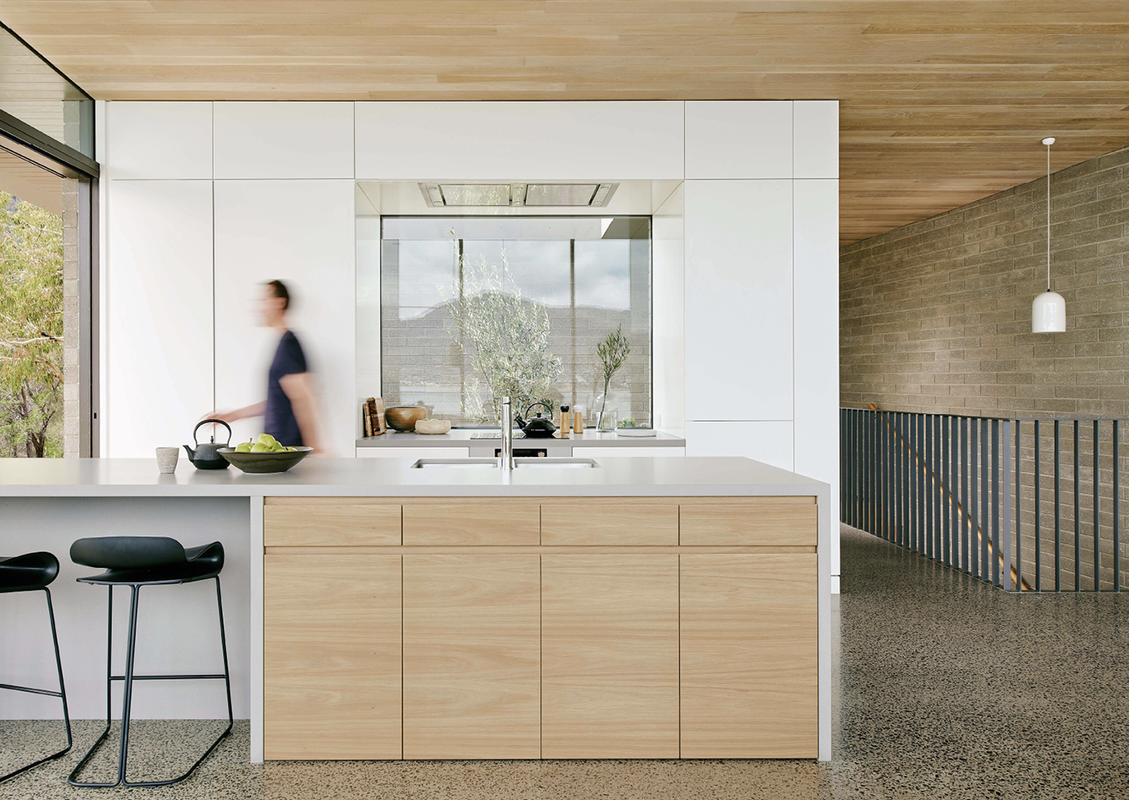 Surfaces meet as simply as possible and materials, such as concrete and oak, play off one another without “noise” or trimmings in between. 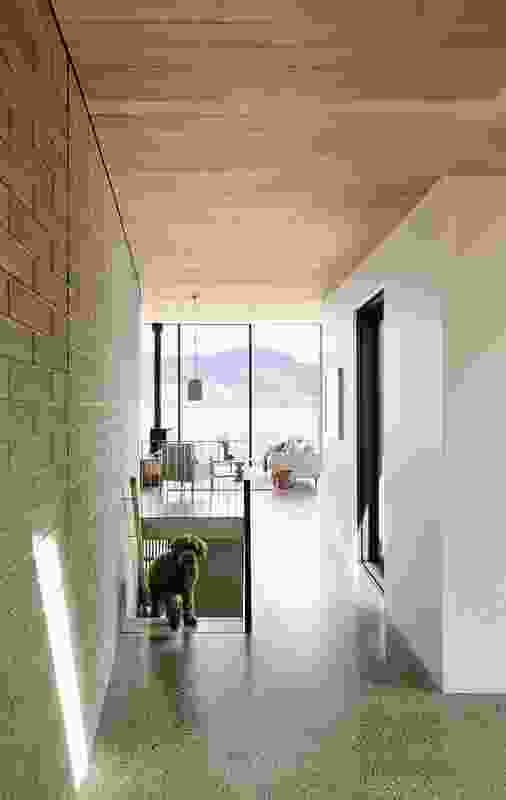 Upon entering the home, the curving southern wall and long arc in the roof pane draw you inside and towards the view. 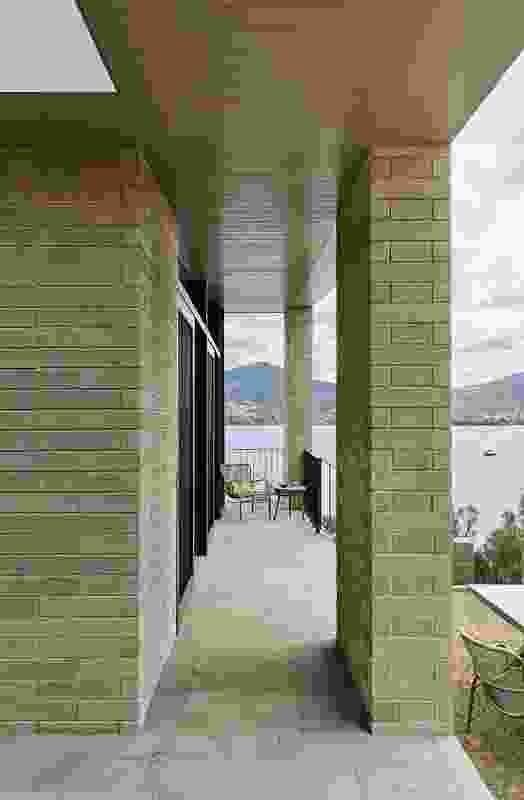 A heavy northern colonnade offers a series of sheltered, sunny dwelling spaces within the line of the building. 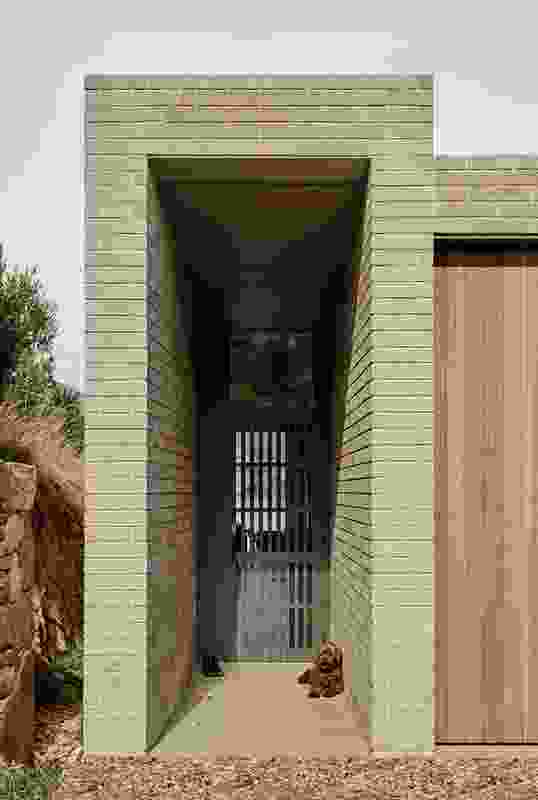 The architects worked carefully with local concrete-block makers to achieve the ideal, earthy colour and texture for the external and internal walls. 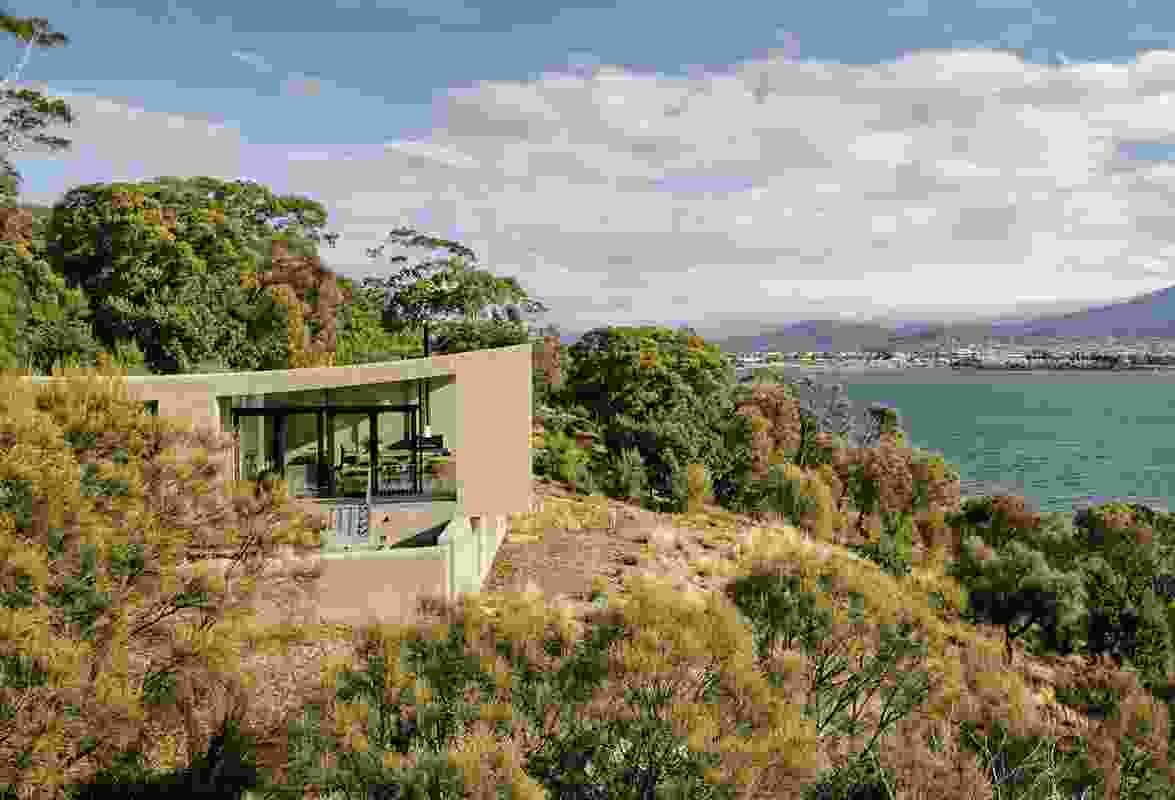 The home’s upper floor appears to perch on the steeply sloping, riverside site, while the lower floor is bedded into the ground.