Exploiting the vertical: House in Darlinghurst

This former electrical substation at the end of an inner-Sydney lane is recast as a couple’s contemporary home by Tribe Studio through the empathetic and dexterous use of vertical space.

The black and white palette is tempered in the kitchen by a marble splashback and spotted gum timber floors.

The building fabric of a city is a social, cultural and economic storyboard that we can use to read our historical relationship with our environment. Set low in a once industrial laneway in Sydney’s inner-city suburb of Darlinghurst, this former electricity substation building tells a story of transition. Having moved on from being a working piece of infrastructure, it was adapted for commercial use and has for the past decade or so been used as a small office space. As the suburb changed into a more sought after residential address, opportunities for the building’s next transformation arose.

Tribe Studio was engaged to transform the building into a contemporary home for a couple and their two dogs, Biscuit and Frankie. The internal spaces of the old substation were not particularly well suited for residential use, so the architects set about undertaking a vertical realignment to create a two-bedroom home over four levels.

Establishing a meaningful spatial connection across the four levels posed real difficulties on such a small footprint. The existing stair structures weren’t placed with any spatial empathy, so a critical decision was made to move and recalibrate the stair into a light well that extends the full height of the building. We often see the idea of introducing a light-filled stairwell brought undone by the stairs themselves, which block off most of the light the stairwell offers. In this case, however, the architects have designed a stair structure that is a gossamer of folded, perforated steel, enabling light to filter all the way down to the entry off the garage at laneway level. Chasing the stairs up through the light well, a black ribbon handrail playfully loops up and around the black steel structure that ties the new volumes together and enables the stairwell to rise up to the rooftop deck level.

The floor levels in the new house have also been reset, with existing floors removed to allow the building to move on from the unsympathetic heights of the old spaces, designed to house machinery rather than people. But while more humane room heights have been established, small clues to the building’s past life can still be found, such as in the stubs of beams occasionally left exposed.

Where new window openings are introduced, they are readable within new steel frames. Filigreed brick screens, laid to match the brick courses of the original walls, bring a layer of privacy to the interior spaces where required. These are combined with perforated, operable steel screens that provide an additional filter for the new openings and add to the composition of the facades.

The building is crowned with a crest of Venetian glass bricks, creating an ethereal cap that creates a privacy screen for the rooftop deck and pool. The glass block screen rises slightly above head height, just enough to provide privacy, but low enough to let the boughs of two ironbark trees lean over and across the deck, filtering both the western sun and the gaze of neighbouring buildings.

By carrying the glass bricks below the line of the rooftop deck, the crest also becomes a clerestory for the floor below, flooding the space with natural light. This move sets up a sense of both delicacy and strength in the tall living space, with the concrete ceiling sitting gently upon a series of twin black steel columns set just in from the line of the original brickwork. The strong black and white composition is tempered by the selection of a long, marble kitchen splashback and the spotted gum timber floors, which feature across all levels of the home.

This project represents a shift in thinking about how small sites might be used for great houses, which exploit the vertical to generate considerate and inventive spatial arrangements. On a site less than sixty square metres in area, an elegant new home has been allowed to germinate from the austere brick utility building set at the end of an inner-city lane. Both architect and owners have made elegant, dexterous decisions that have reinvigorated the site as an urbane home that provides a variety of spaces for its occupants, while celebrating and enhancing the built fabric of our city.

Other
Structural steel and mesh stair by BML Steel

Exploiting the vertical: House in Darlinghurst 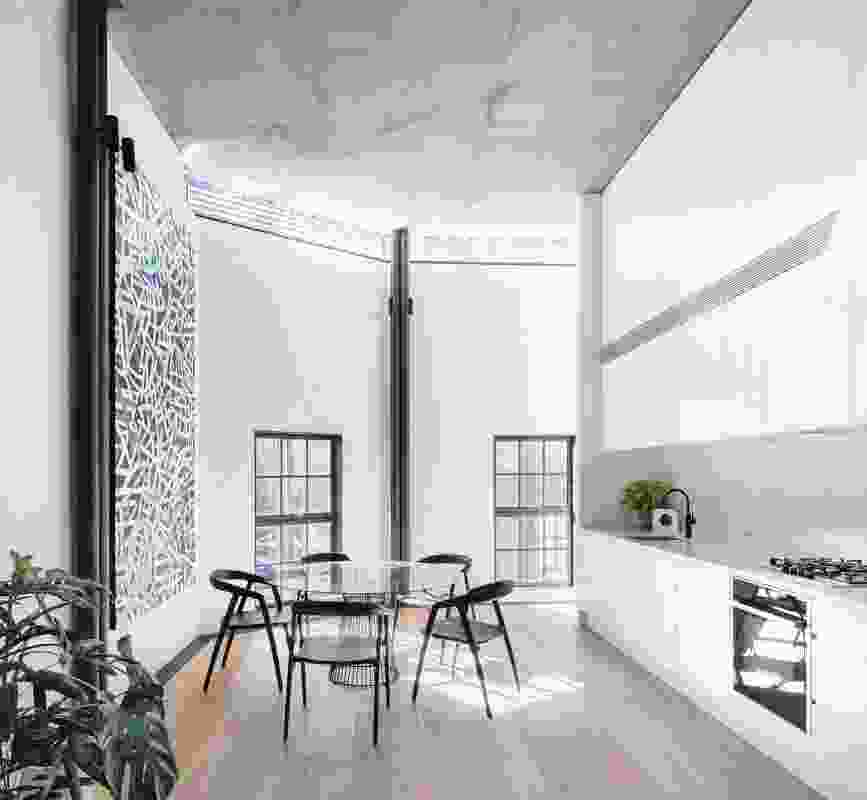 The black and white palette is tempered in the kitchen by a marble splashback and spotted gum timber floors. 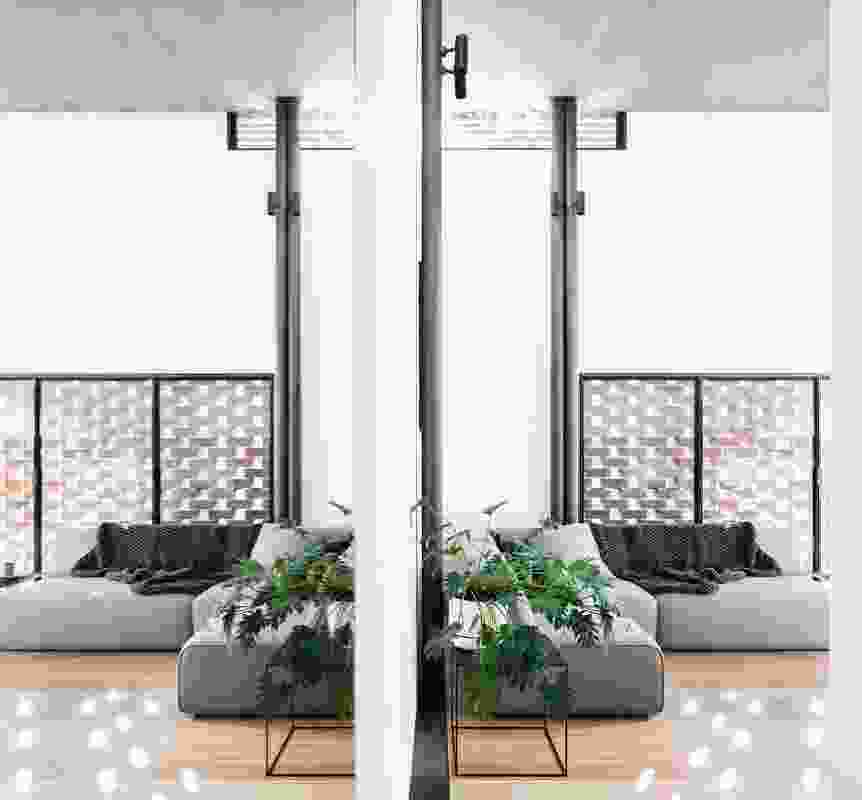 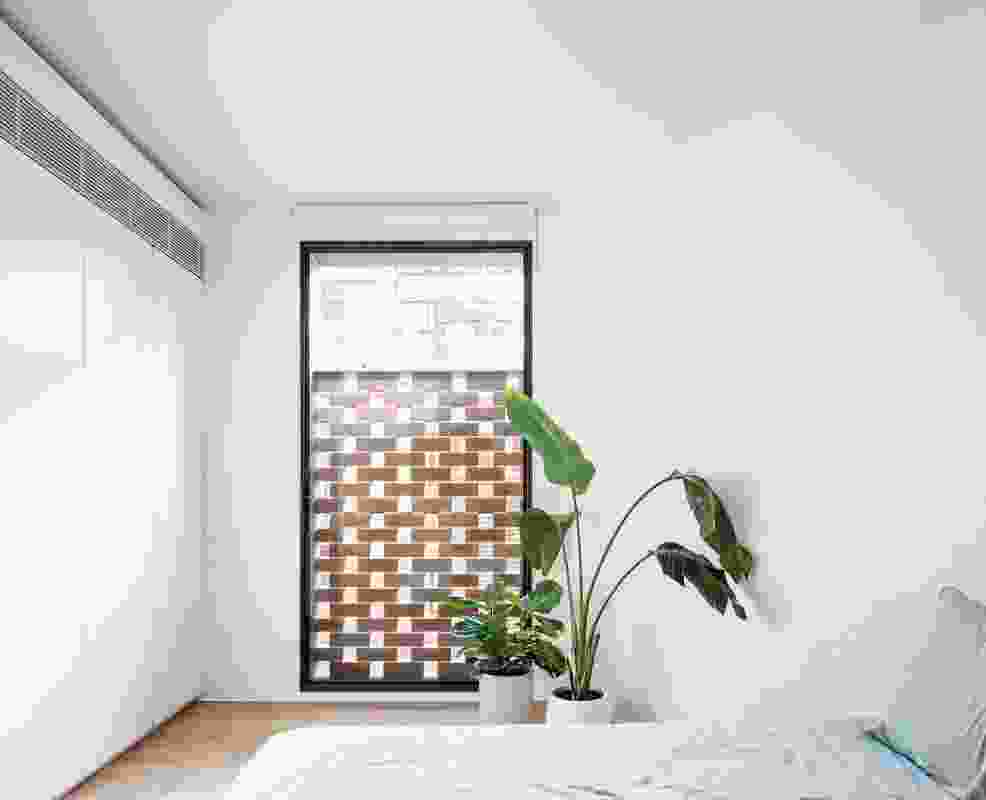 Newly introduced steel-framed windows are veiled with filigreed brick screens, which have been laid to match the brick courses of the original exterior walls. 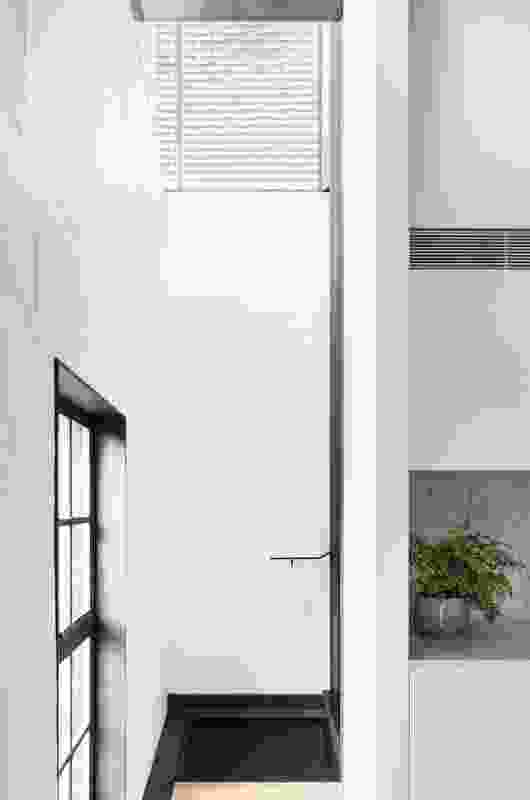 Reconfigured to stack vertically along the plan’s eastern edge, the new stair was vital in creating a meaningful spatial connection across all four levels. 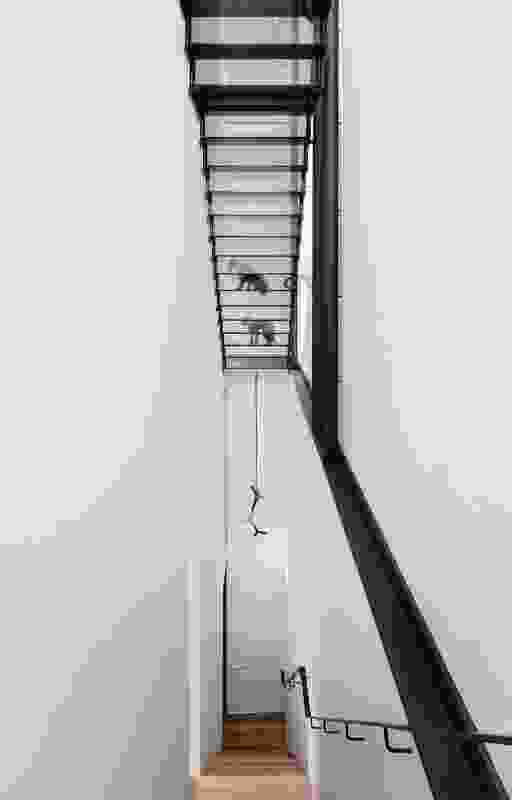 The staircase, now set in a light well, is a porous gossamer of perforated steel. 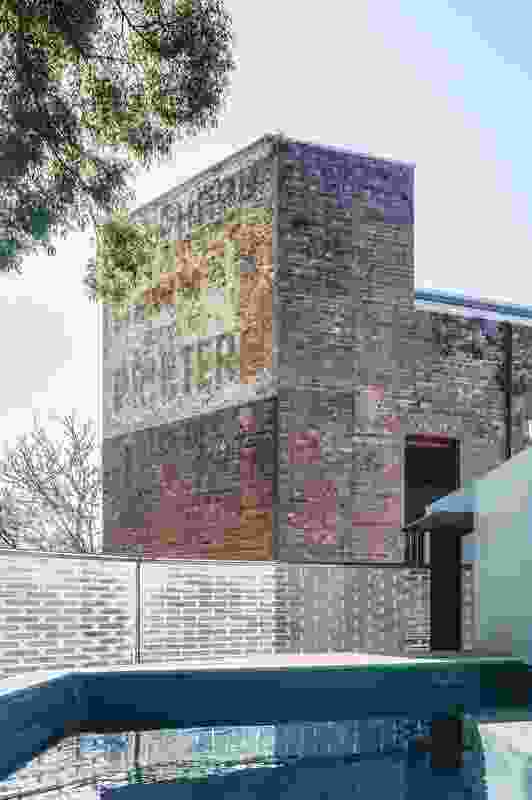 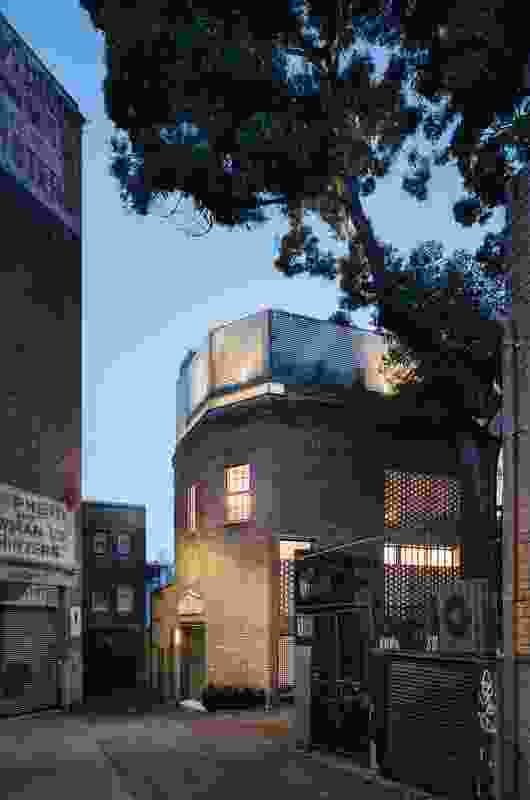 The architects’ considerate and inventive approach to space has optimized the vertical potential of the small urban site. 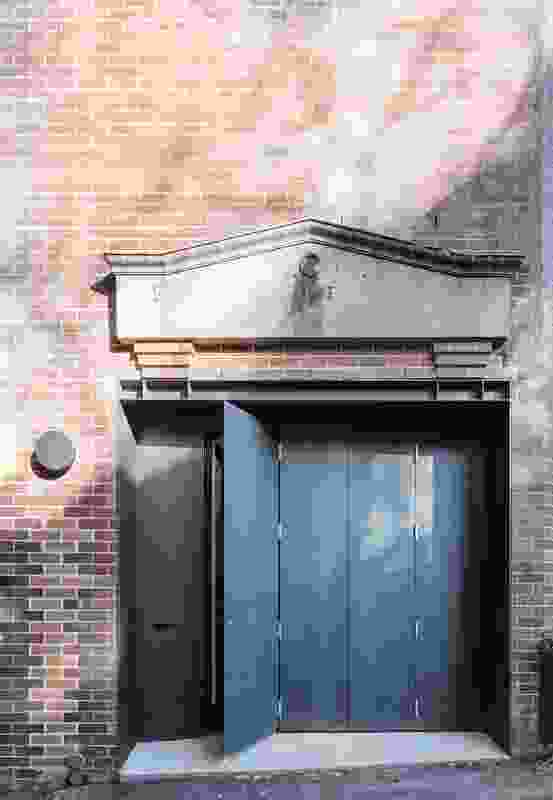