Light and shade: House in Noosa

Nestled into a hilltop forest above Noosa’s Laguna Bay, a new house designed by MORQ forgoes bold form for the quieter pleasures of flickering shadows.

Located on a prominent hilltop site, the house is designed to recede into its leafy surrounds.

Given the gorgeousness and sheer drama of this site on Queensland’s Sunshine Coast, the obvious architectural gambit might have been the cantilevered treehouse. Perched above Noosa’s main swimming beach Laguna Bay, the steep slice of thickly forested land faces west over the water. An arc of white sand traces the edge of the continent, broken by the entrance to the Noosa River. Look north and on a good day you’ll see Double Island Point and Teewah’s dunes of banded coloured sands. Inland, Mount Cooroy and Mount Cooroora in Pomona show their pyramid shapes in smoky blue.

Because of the gradient, the road at the base of the slope is barely noticeable and instead you feel as if you are peering through the foliage directly onto the heads of the beachgoers and surfers. Voices float up in a staccato beat, interrupted by the rhythmic crash of waves. The site had been sliced off the back of an existing property, and no doubt was once dismissed as too tricky for building.

MORQ architects (Monteduro Roia Quagliola) was initially tentative about building on such a fragile site. The practice wanted to explore a more subtle arrangement of spaces than that of the projecting deck, and his design instead plays with nuances of light and shade, and avoids the “big picture” grab of the panoramic view. “We were keen to establish a strong connection between the house and the environment,” says Andrea Quagliola. “It was challenging because the site faces west and there was an initial request for views. We don’t believe in full walls of glazing.”

Determining where the views might be best framed and curated was difficult, with much of the slope inaccessible. Early in the design phase, scaffolding helped establish which moments were best celebrated. Trees were plotted so they could be salvaged and built around.

MORQ is based in Perth and Rome, and it was through a mutual Italian friend that the Noosa client discovered his work in Europe.

On arrival down a long easement driveway, the house in Noosa is camouflaged as a discreet wall of ironbark battens over black fibre cement, curving in sympathy with the contour on which it rests. The weathering timbers blend with the tree trunks visible behind. A copper roof, also discreetly blending into the bush palette as it ages into greens and greys, folds over and down to meet the undulating, striated wall.

A central door opens to the home’s spine of spaces that run along its eastern edge. The three split levels share a sense of being strongly anchored into the earth and into the side of the cliff face. MORQ describes how the plan was conceived as “an elaboration of a retaining wall.” Council placed tight restrictions on both the footprint and the height, resulting in a long, skinny building. While the spine serves kitchen and bathroom spaces, living areas and bedrooms take up the dress circle positions in the treetops. Each is scaled to a considered, humane dimension, with diagonal axes to neighbouring spaces or around protruding tree trunks that spear up from niches and courtyards. A high degree of craftsmanship is evident in internal joinery and exterior ironbark and copper cladding, and MORQ stresses the importance of the skills of the builder and the copper roof installers for the “highly tailored” elements.

But it is the passion for the aesthetic observations of early-twentieth-century Japanese author Jun’ichirō Tanizaki that is the driving force behind the shadow play that lends the building its sense of reverence and subtlety. In In Praise of Shadows, Tanizaki eulogized the simplicity of Japanese architecture and the importance and essential beauty of shadows. MORQ’s portfolio of Roman interiors also celebrates chiaroscuro. The Noosa house manipulates the strong contrast between western sunlight and the deep shade proffered by the forest shadows, and celebrates both conditions. Materiality and natural weathering play their part instead of conventional ornamentation. Pauses, notes Andrea, are as important as views: “Moments where the sunlight is borrowed, and the presence of the trees is only felt through changes in light or shadows, rather than through a direct visual connection.”

Light and shade: House in Noosa 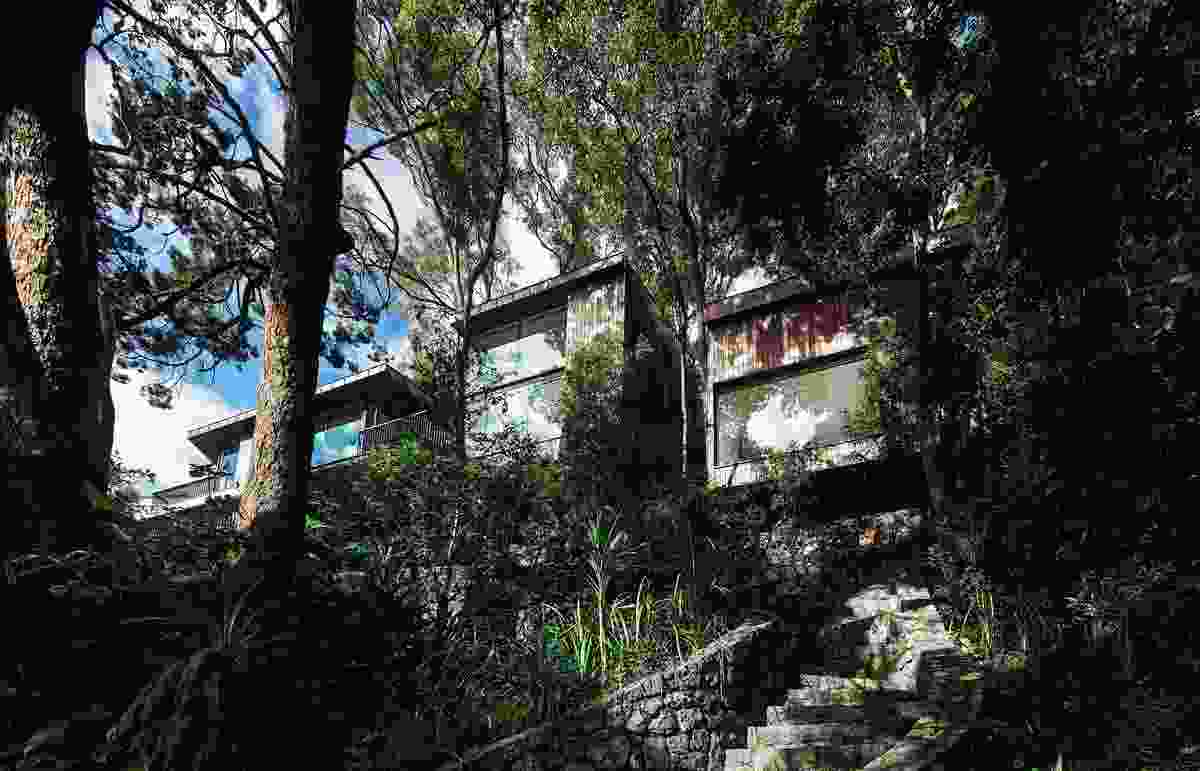 Located on a prominent hilltop site, the house is designed to recede into its leafy surrounds.

On arrival, the house is camouflaged as a discreet wall of ironbark battens over black fibre cement, curving in sympathy with the contour on which it rests. 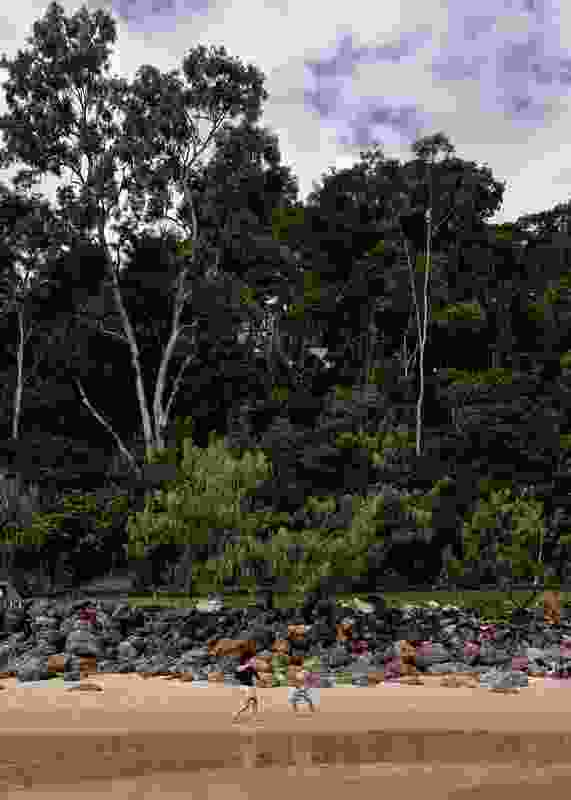 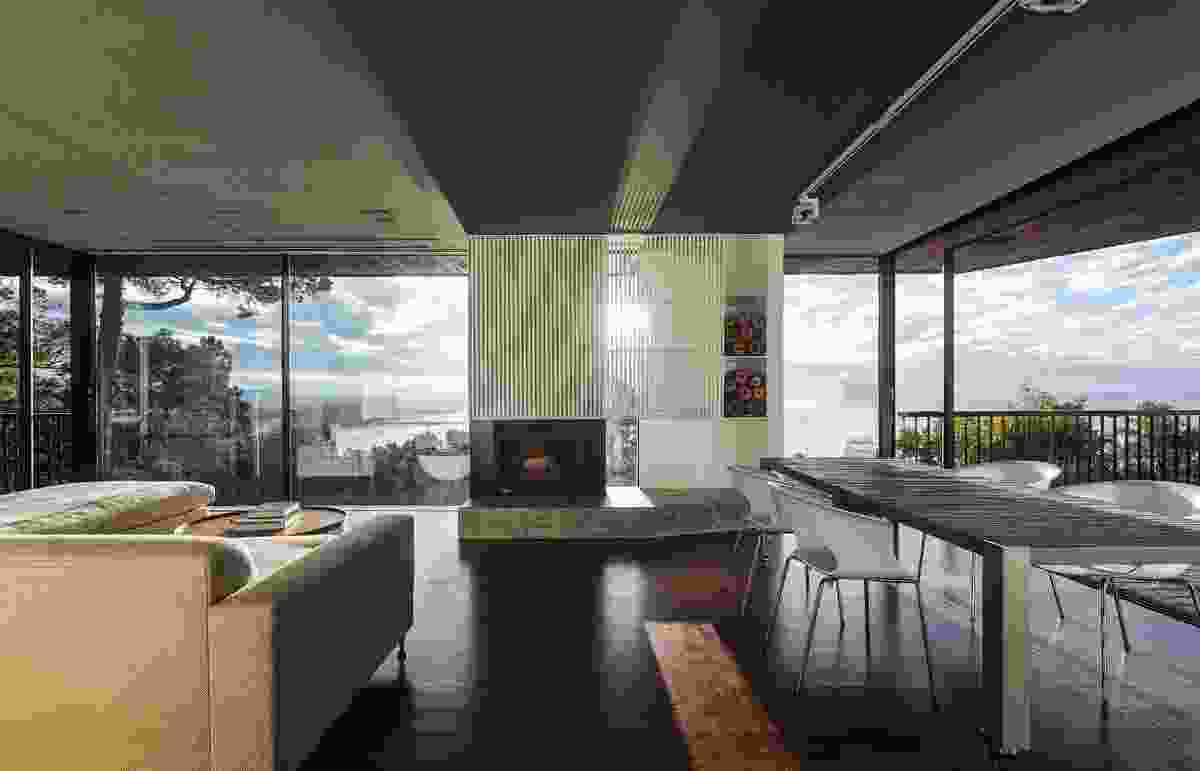 The interior plays with nuances of light and shade, avoiding heavy-handed emphasis on “big picture” views. 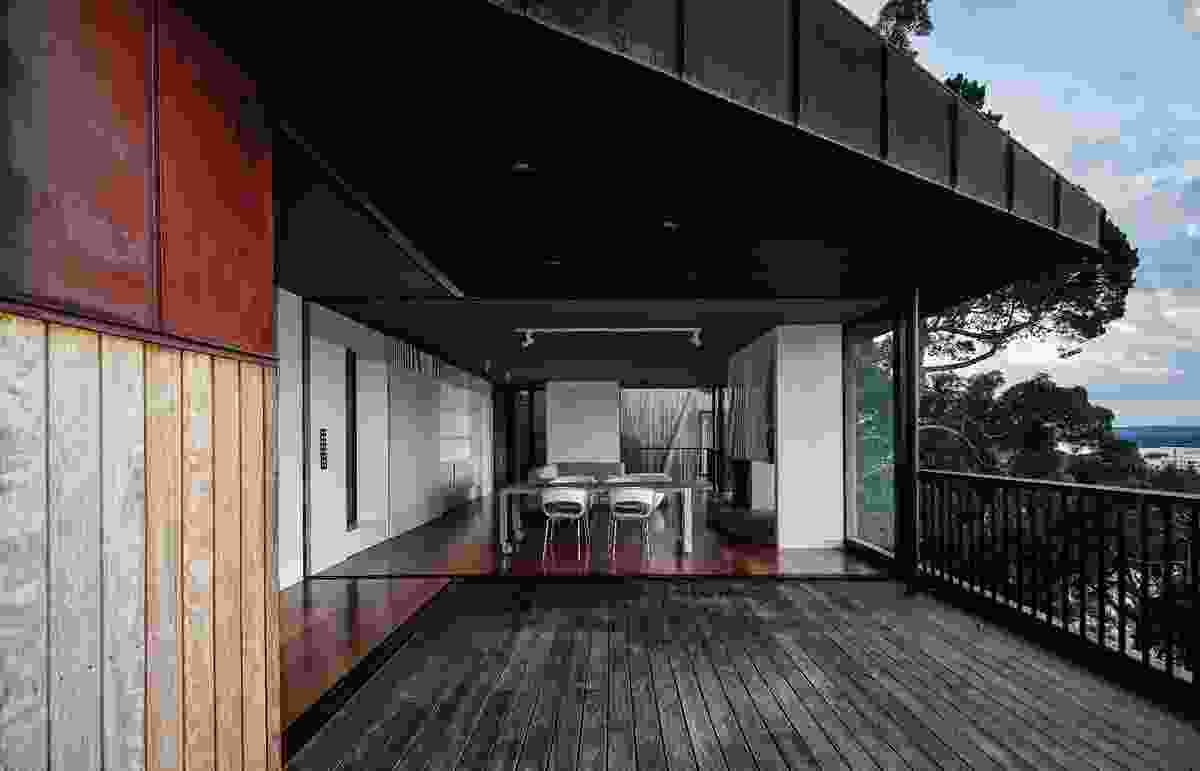 Weathered timber and copper blend the house in with its leafy surrounds. 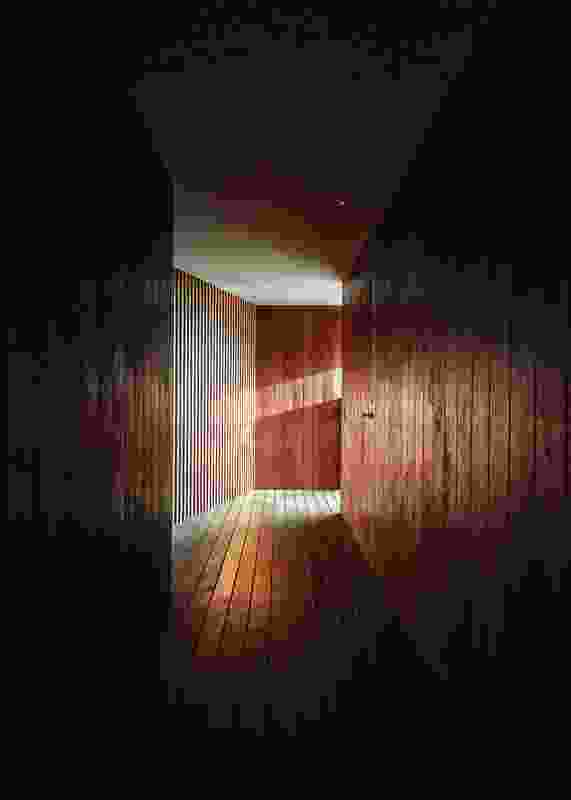 Shadow play lends the building a subtle sense of reverie. 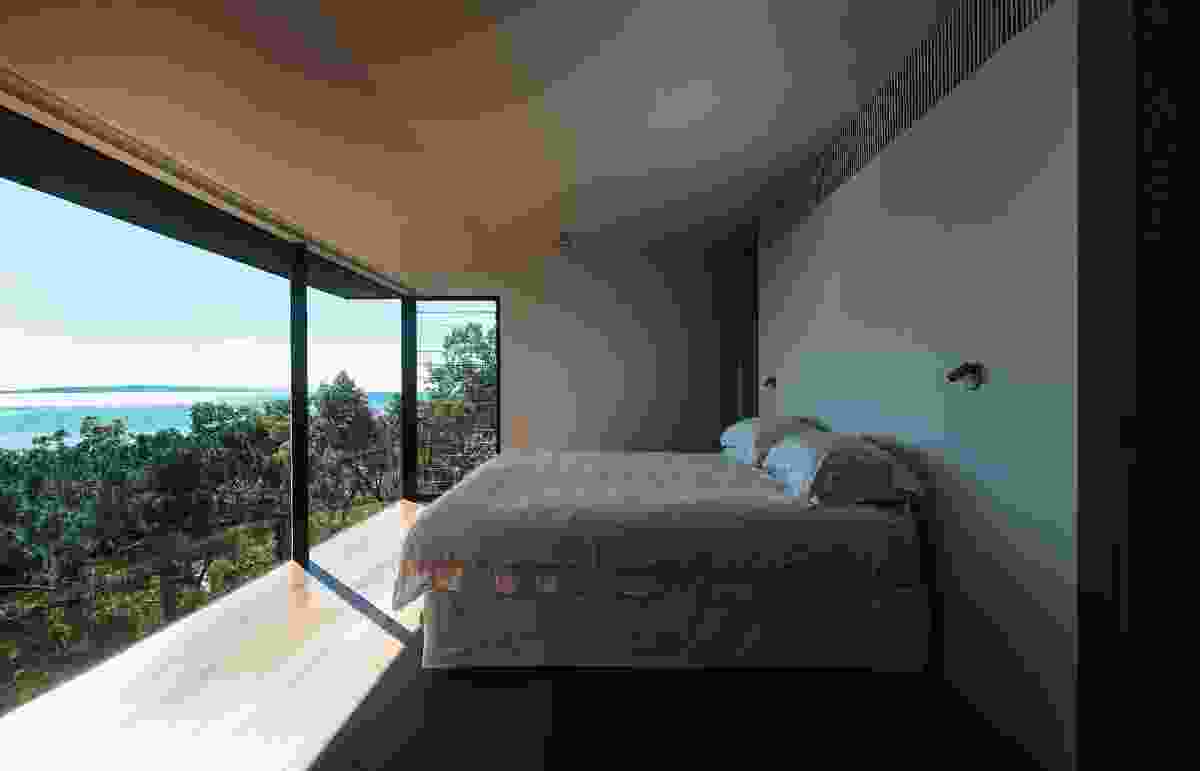 The House in Noosa balances bright, western light and views, and the deep shade proffered by the forest. 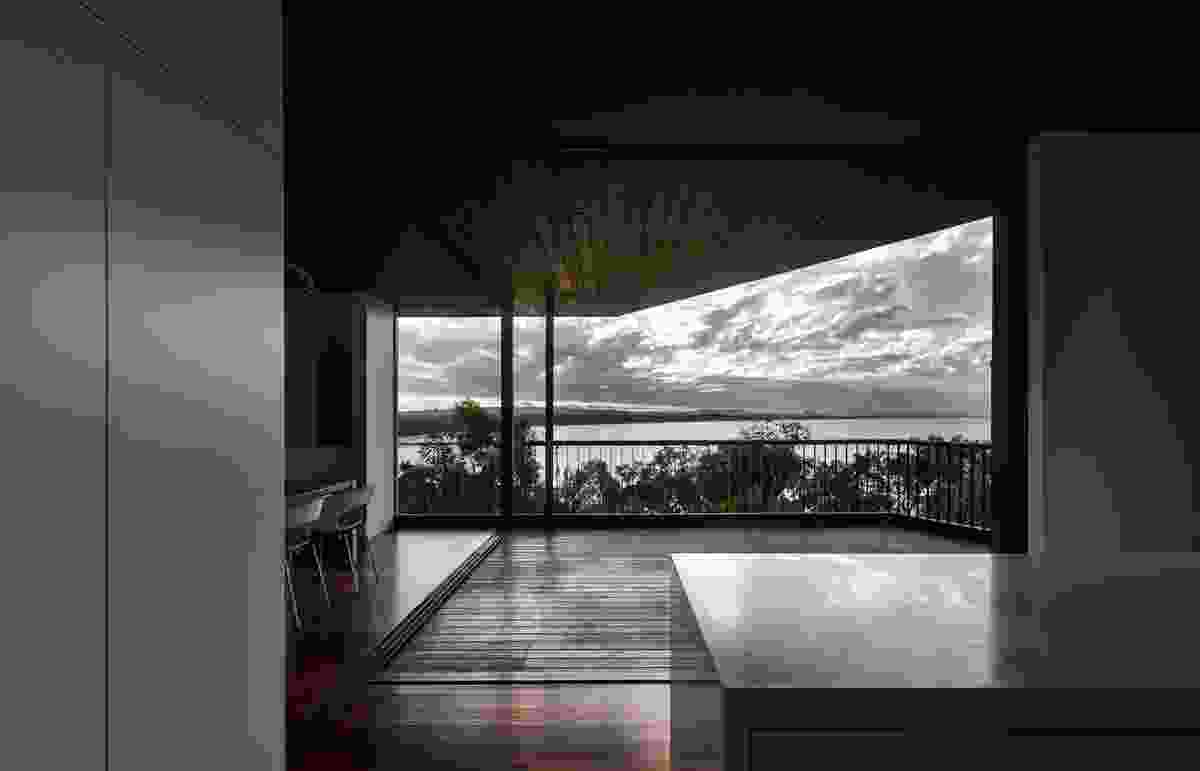 Determining where the views might be best framed and curated was difficult, with much of the slope inaccessible. 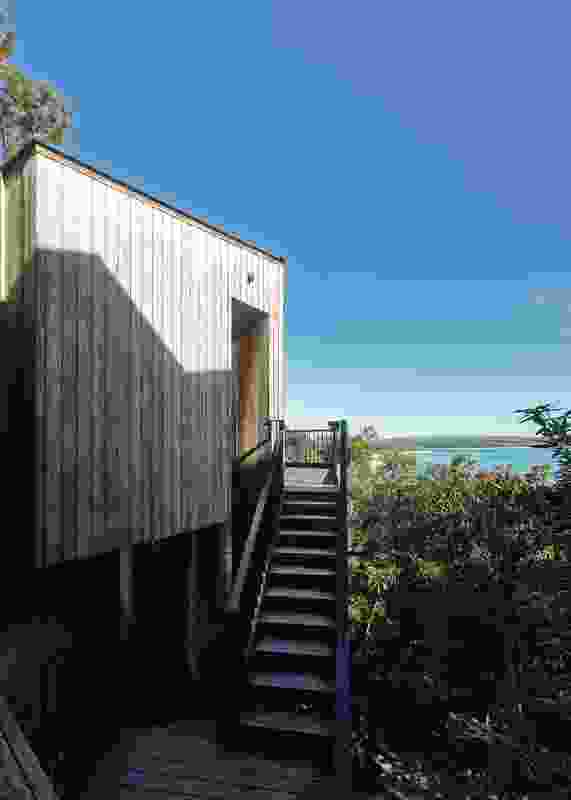 The house was conceived as “an elaboration of a retaining wall.” 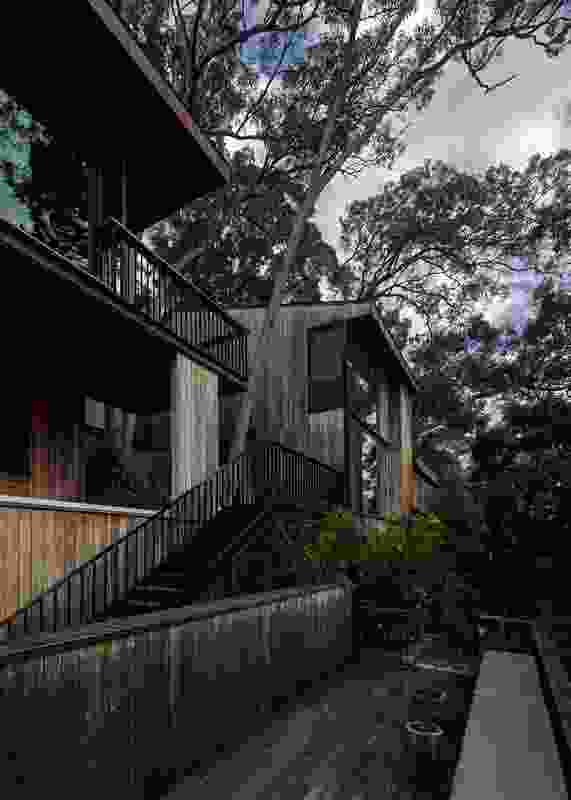 The three split levels share a sense of being strongly anchored into the earth and into the side of the cliff face. 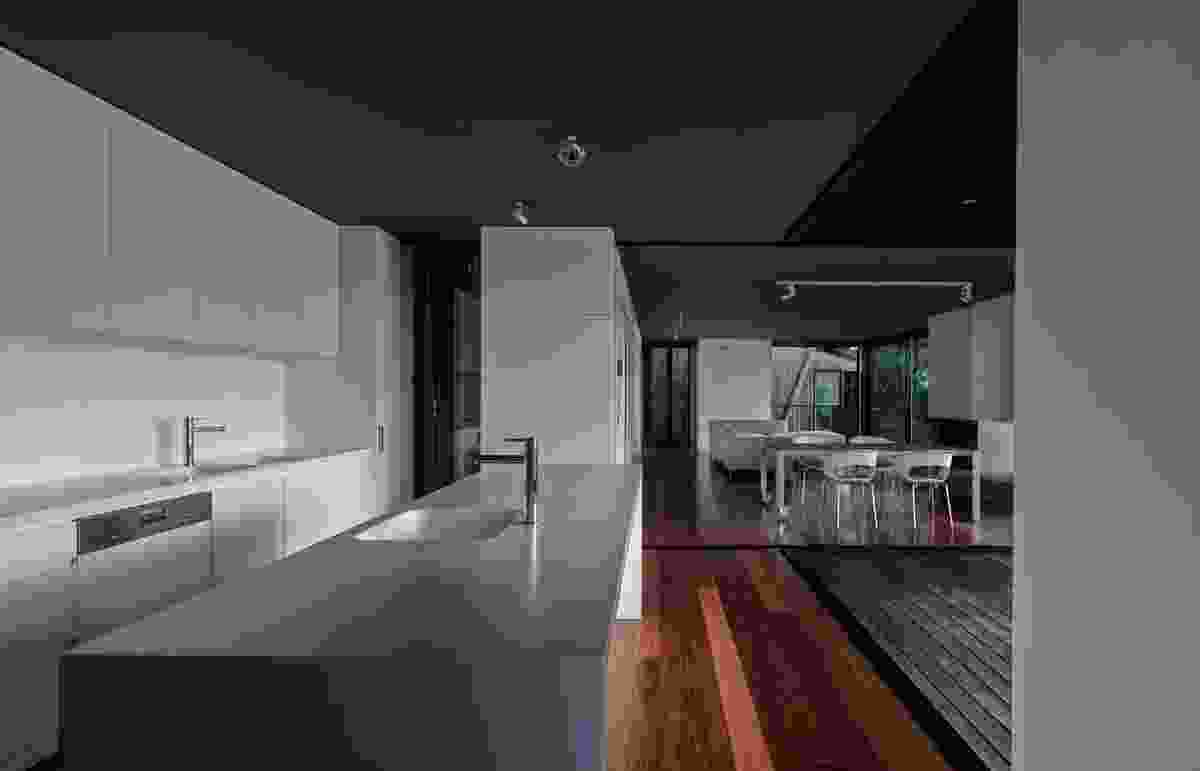 The spine of the long, skinny building serves kitchen and bathroom spaces. 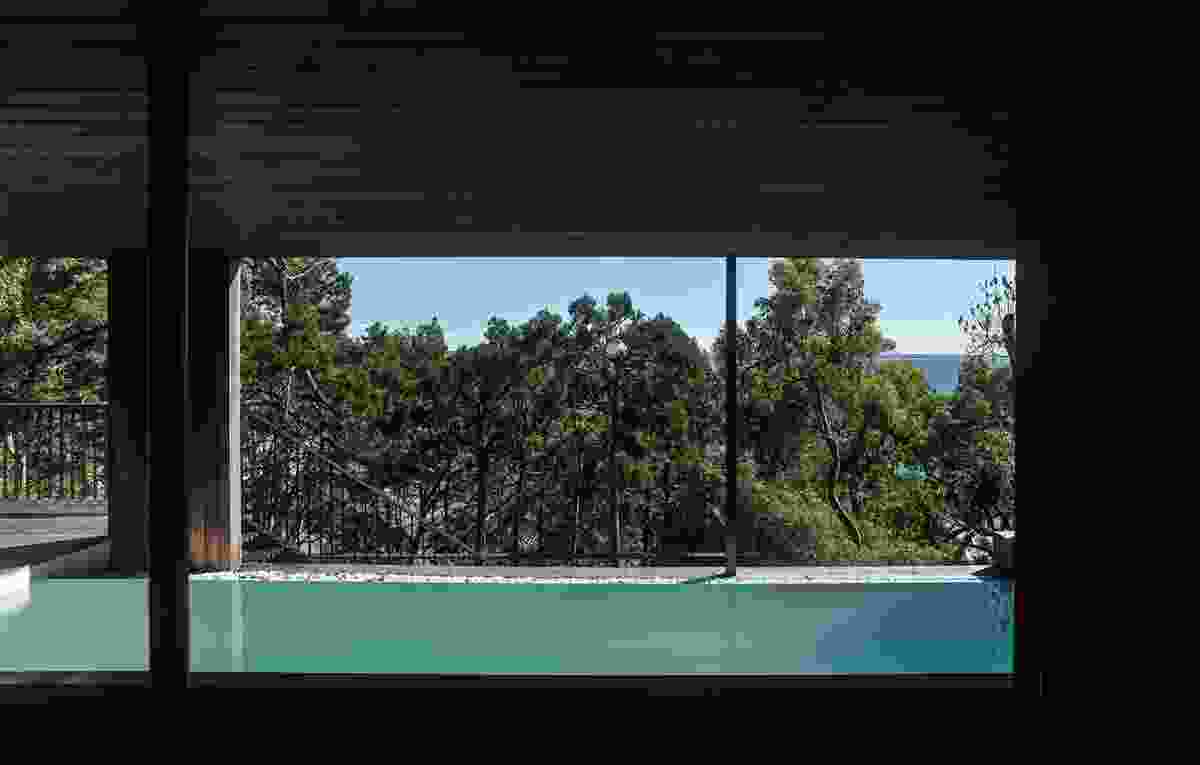 A pool is tucked underneath the main living zones.