With clarity of purpose and compelling spatial planning, this narrow three-level addition to a circa 1920s abode by Architect Prineas provides extra space for family life.

The extension’s modern singular form contrasts with the horizontality of the existing house.

Bellevue Hill has long been regarded as one of Sydney’s most affluent suburbs, with the eastern enclave boasting some of the state’s most highly regarded heritage properties. They sit among other residences no less impressive in size or scale, raised and set back from narrow tree-lined streets that gently wind their way through the leafy neighbourhood. Key to Bellevue Hill’s charm is a rich tapestry of diverse architectural genres, which allows a sense of history to prevail. Certainly, this high-end eclecticism appealed to architect Eva-Marie Prineas’s clients, a professional couple with two teenage daughters, when they purchased the home.

The circa 1920s two-storey brick abode with slate shingles oozes character and was in excellent condition, thanks to a previous renovation by Burley Katon Halliday. While the clients were happy with the updated kitchen, bathrooms and living spaces, it soon became apparent that original areas of the home needed to function more efficiently, not to mention that the family required more space.

Their straightforward brief called for a study, library and rumpus room as well as a lift to make life easier for visiting grandparents. The desire for separate internal access from the street-level garage, on the site’s northern side, to the raised house was pivotal in determining where the new addition should be positioned. “This project is really different from what we usually do because most of our extensions can’t be seen from the street,” explains Eva-Marie Prineas, principal of Sydney-based practice Architect Prineas.

In this respect, the narrow three-level addition may be unlike any of Eva-Marie’s previous built works, although its eloquent expression is typical of the practice’s style. Clad in dark routed fibre cement sheeting with black steel privacy screens on the upper level, the new extension is economical in its footprint, extending vertically rather than imposing on the site’s boundary.

This modern singular form contrasts with the horizontality of the existing house. Yet its detached street-facing elevation works to accommodate the old verandah and balcony, while a consistent fascia line visually unites old and new. The project entailed extensive structural work to underpin the original dwelling, allowing for a ground-level deck to be built on top of the garage. This outdoor feature then wraps around the rear of the house, further integrating the addition with its surrounds.

The new structure’s internal floor space is an unbelievably compact forty-four square metres, with one room occupying each floor – a rumpus room is below ground, the library is at ground level and the study is on top. It’s a compelling exercise in spatial planning, commendable for the logic and clarity of concept that make the overall scheme appear effortless. However, the project was not without its challenges. “It was really important that the rumpus room not feel like a dark, lonely passage. So that space was always going to be interesting in terms of how we resolved it,” notes Eva-Marie.

Her solution positions a small light well near the new internal entry that, along with a skylight and a rear sunken courtyard, captures plenty of northern light. Both the light well and the courtyard are finished in the palest of green tiles to lighten the rumpus room’s interior, which has all the appeal of a trendy inner-city terrace. The tiles’ rippled surface lends a sense of movement, as do the hand-troughed concrete floor and a concrete ceiling featuring a timber imprint. Such details add texture and further soften the room’s materiality.

This zone is a teenager’s dream hangout, while the library is the clients’ perfect retreat. Where the rumpus room’s aesthetic is raw, almost industrial in flavour, the ground-level library is sophisticated. Its palette is still minimal, comprising brush box timber flooring to match the floor in the existing house (as well as the study) and the extension’s distinct black joinery, which stands out even more because of this level’s generous ceiling height.

Eva-Marie’s use of black in a space not even three metres wide may seem unexpected, but her concept is uncompromising. “We wanted the storage and shelving to recede because it is such a narrow space and we also needed something that was anchored,” she says. “The structure reads as some sort of black stealth addition on the side of the house and it made sense to bring that inside as well.” It’s echoed in black steel window frames, although any feelings of heaviness are nullified by a glass threshold to the existing house and full-height bifold glass doors at the front and rear of the library. When these are open, the boundary between inside and outside diminishes, essentially creating a bright outdoor room.

An exquisite attention to detail is evident throughout the project; even the rear sunken courtyard’s delicate balustrade has been well considered to visually align with the study’s privacy screen. And there’s cohesion between the pale green surfaces of the light well and the courtyard and the colour of the small tiles in the library’s ethanol fireplace recess. These mosaics, in black, are in turn used on the addition’s front exterior reveals, a playful element that shimmers in the morning light.

It was always Eva-Marie’s intention to create something elegant that’s bold yet measured, without detracting from the original house. She successfully delivers on this vision, allowing old and new to respectfully coexist while providing the clients with plenty more living areas in an addition that’s undeniably beautiful. 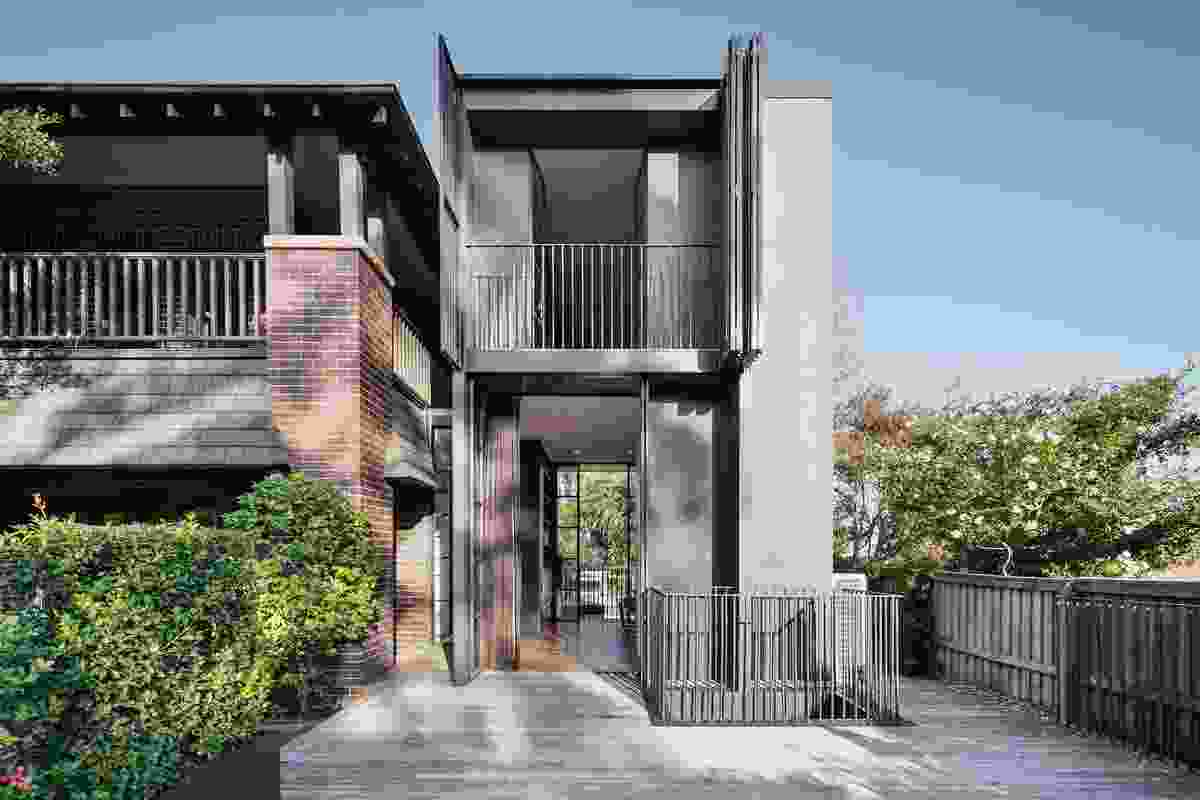 The extension’s modern singular form contrasts with the horizontality of the existing house. 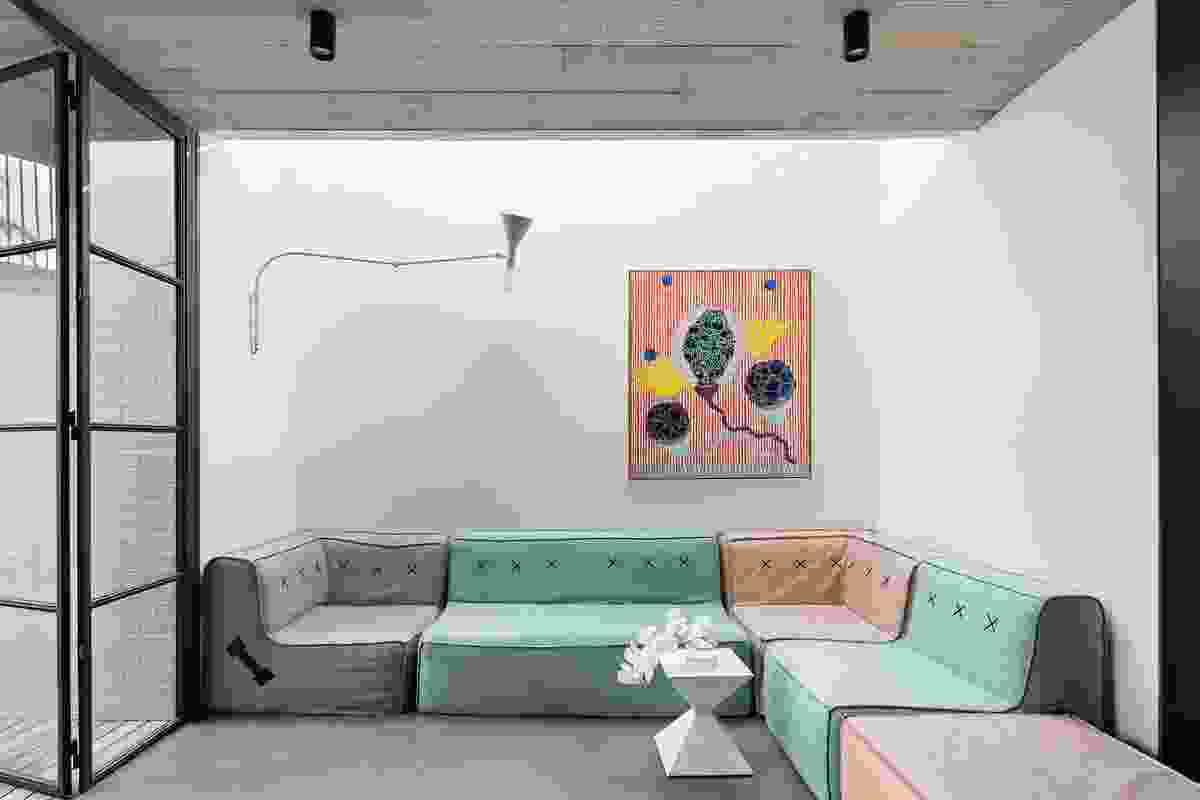 With its textured concrete and minimalist palette, the rumpus room has a raw, industrial feel. Artwork: Gabrijela Iva Polic. 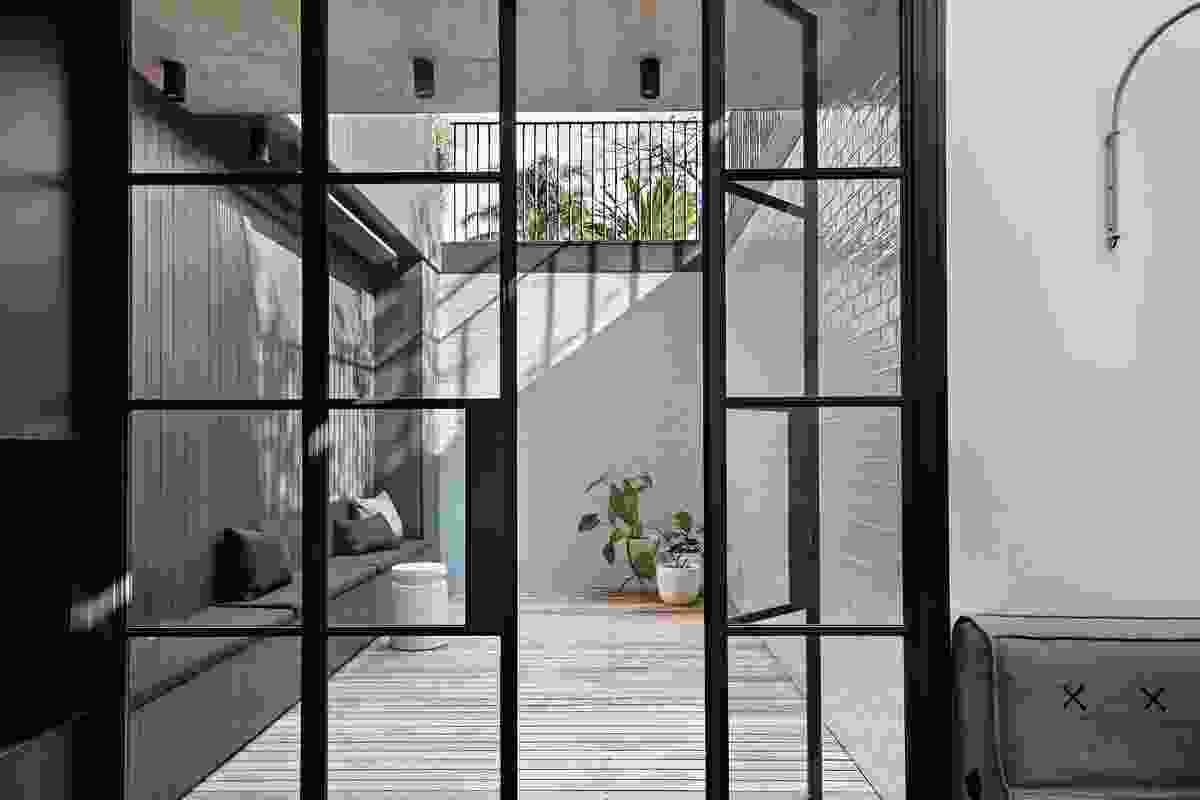 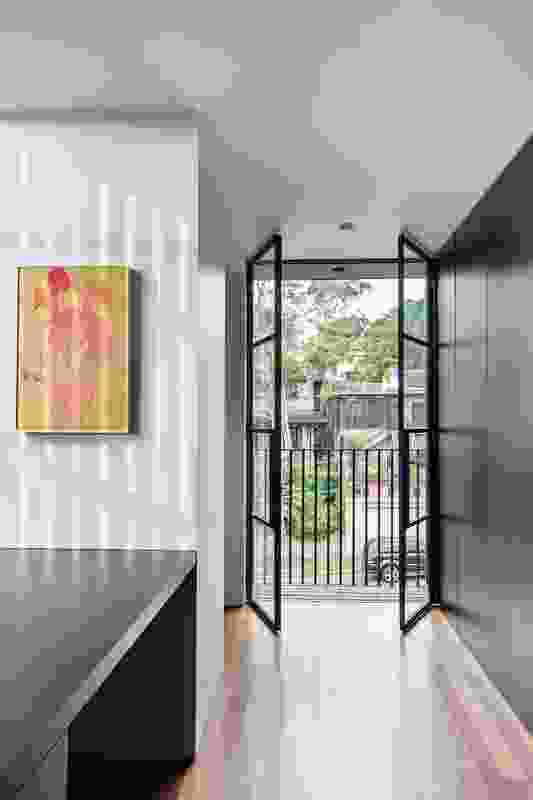 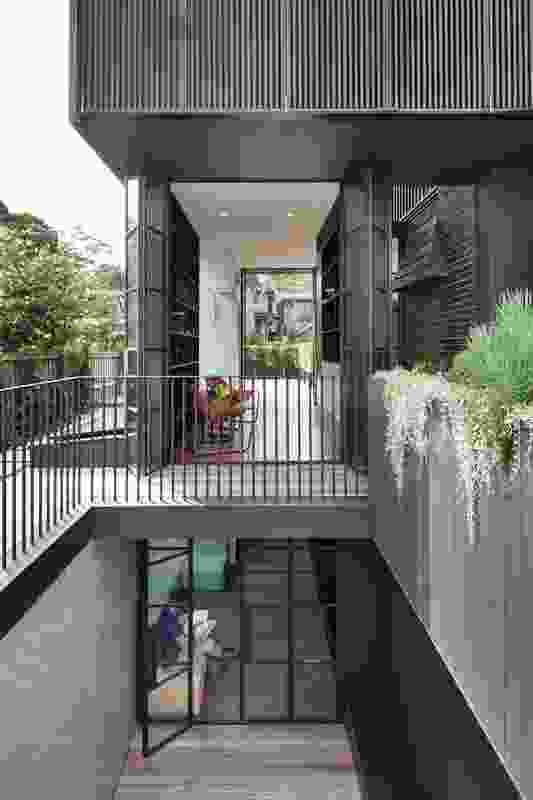 Full-height bifold doors work to diminish the boundary between inside and outside. 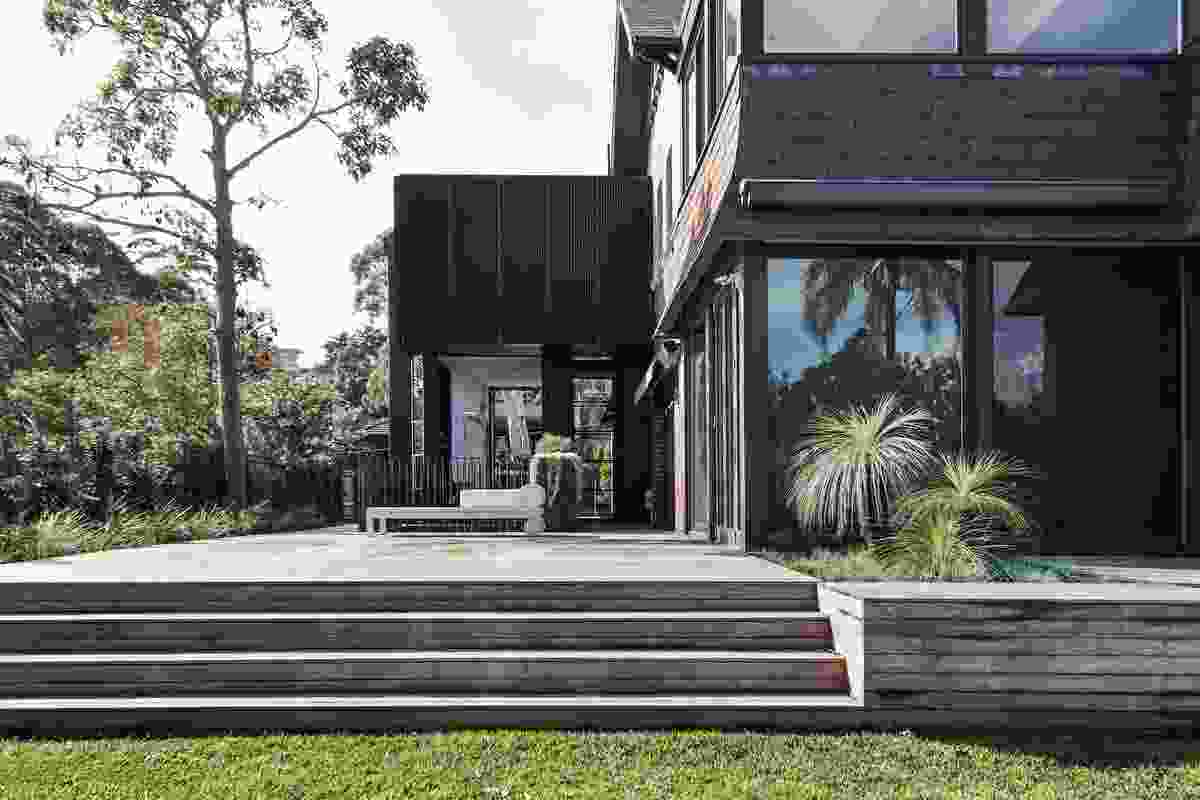 With its dark palette and small footprint, the project reads as a “black stealth addition.”