Reflecting on her encounter with Kraftwerk 2 in Zurich and the people who live there, Tarsha Finney considers the ownership and governance model of the cooperative – the entrenched domestic norms that it challenges and its capacity to facilitate care and connection beyond the single family unit.

Kraftwerk 2 (2011), designed by Adrian Streich Architekten AG, was developed by the Kraftwerk1 collective – one of the youngest housing cooperatives in Zurich.

The most interesting cooperative housing project that I have visited in the past eighteen months is Kraftwerk 2 in Switzerland.1 Designed by Adrian Streich Architekten AG, Kraftwerk 2 was developed and built in 2011 by an anarchist collective that first became involved with housing in the late 1980s, using nineteenth-century cooperative laws specific to Switzerland – covering agriculture, health and education as well as housing. Twenty minutes from the centre of Zurich, the project houses a combination of “cluster” apartments, shared apartments and more traditional apartments in a converted orphanage. Each cluster apartment is made up of multiple private bedroom units with ensuite bathrooms that together share a substantial kitchen, dining and living space. The apartment that we visited had the following residents: two single women over the age of sixty; two single parents, each with a child under the age of ten; and a couple, who were also at university together. That’s eight people in total, including two children, living together in a non-familial group and sharing all the rituals of daily life.

Interestingly, each bedroom in the cluster apartment at Kraftwerk 2 was built with a micro-kitchen, though residents say they would prefer storage over individual small kitchens as they don’t get used. This matters, of course, because the option for residents to stay apart to cook and eat, rather than using the large shared kitchen and dining table, was part of the spatial reasoning and was built into the eventual spatial performance of these unusual dwelling units – almost as a transitional phase, away from domesticity. Like that moment in the move from carriage to motor vehicle where the interior of the car retains the logic and nomenclature of “dashboard” decades after the horse has been untethered from the front.

I was really touched by this project when I was told a story about one of the residents in an apartment on the ground floor of the building, who had had a stroke. He had care come to him in his home several times a day, for two meals and for things such as bathing and dressing, but he could no longer cook for himself in the evenings. This left him both hungry and in danger of suffering what so many of us do – loneliness and isolation. Given our (quite reasonable) critique of institutional aged care and our desire to grow old in our homes, there is emerging an existential crisis of loneliness and isolation as we skin the interior surface of existing dwellings with all of the support for life but fail to notice that it is our social lives that we are abandoning – our lives of intimacy and care. In response to this neighbour’s condition, the residents at Kraftwerk 2 drew up a roster so that he always had someone to share an evening meal with and people to talk to. Built into the DNA of the Kraftwerk 2 project, built into the relationship between its spatial performance and its governance structure as cluster apartments, seems to be a capacity for multi-scalar care and communities of interest to emerge that sit beyond the space of the single family dwelling unit.

How are we to understand these clusters and the relationship of intimacy and care between the people living their daily lives within them – who are they to each other? Is this just another flat-sharing arrangement driven by necessity and within the context of the acute housing unaffordability suffered by alpha cities globally: Zurich, Vancouver, London, Sydney, Hong Kong? Are the Swiss just particularly good at this in a way that we tell ourselves as Australians we are not – or is something else going on?

Typically, when we speak about innovation and change in housing, we call for increased flexibility and mobility. This dominates the catalogue of new publications on housing types that have appeared since the late 1990s – excellent reference manuals that will be found on the bookshelves of any half-decent architectural practice engaged in multiresidential housing. Floor Plan Manual Housing by Friederike Schneider, Oliver Heckmann and Eric Zapel, for example, argues that what is required for multiresidential housing to address the massive changes in demographics that so many of us are going through in terms of ageing and labour conditions is “an ambiguity” in the plan – the plan needs to move, to be flexible. This, they argue, would allow for multiple ways of dwelling through time, within the same unit. In apparent opposition, another kind of avant-garde challenge to housing that is often held up as a possibility for the future is Toyo Ito’s Pao I and II – Dwellings for the Tokyo Nomad Girl/Woman (1985 and 1989). Here it is the resident who becomes mobile in the city, untethered from the apartment.

What each of these propositions fails to notice is that this kind of individualized mobility (in the individual or in the plan itself) is precisely the project that modernity (in collusion with ourselves) has been setting up since the nineteenth century. It belongs to the same project that the well-published and discussed 1851 model apartment for four families so well outlined by Robin Evans in the essay “Rookeries and Model Dwellings” establishes. Rooms exist for specific purposes, where individualized space and spaces that allow a coming together exist in a kind of dynamic, diagrammatic agonism: boys’ bedroom, girls’ bedroom, each space speaking of the dangers of the newly emerged condition of childhood and gender specificity; the parents’ bedroom slightly tucked away, containing the question of sexuality implicit in its realm; and of course the living room, where everybody comes back together to observe, survey, check in.

With housing, as architects and as part of the design process, we are both subject to and object of our investigations and interrogations. As I critically organize the work of women in drawings as a questioning, a diagnosis and a projection of who we are and what the city is, in the same moment I am imagining myself in the subject position of mother, daughter, sister and wife, with all of the performances that that involves. It works for me and on me, but I can understand why others just see a nice-looking house, as Jeffrey Kipnis once said.

This makes it both fraught and extraordinarily curious work – a fact that is often missed because it is both harder than we usually give it credit for and equally more banal. But that’s precisely because we’ve become so bad within the discipline and profession of architecture at recognizing the real work of architecture, its actual material politics and the conditions of experimentation that allow it to operate.

And so back to Kraftwerk 2. This project can be placed within an emerging body of architectural work and practice globally that is using the ownership and governance model of the cooperative (in a myriad of forms specific and responsive to legal jurisdiction: Swiss nineteenth- century co-ops; the German Baugruppen; the La Borda project in Barcelona; the Australian variant, Nightingale) to experiment with new kinds of collectivities of shared interest. What is unique in all of these instances is that architects are either leading or they are community members critically involved in the development of projects. What matters is that the client groups are eccentric and it is the design process that is the site of a robust negotiation of difference around a drawing. The term “eccentric” is important because these co-op member groups or clients aren’t the lowest- common-denominator categorization of market research deployed by developers and real estate agents and designed specifically to eliminate difference and risk. They are cultivating difference in terms of ageing demographics, blended and extended families, solo living, the demands of childhood and compact opportunities, negotiating in a way that is enabling unforeseen solutions to shared problems. And in doing so, they are making one of the only real challenges to the inherited scale-based spatial diagrams of domesticity that have held us in place in the city firmly and with very limited compromise since the 1920s, the last great period of experimentation into domestic life.

1. This research work is being undertaken as part of the Intergenerational Cities Research Stream led by Tarsha Finney in the School of Architecture at the Royal College of Art, London. 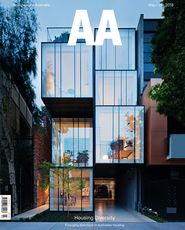 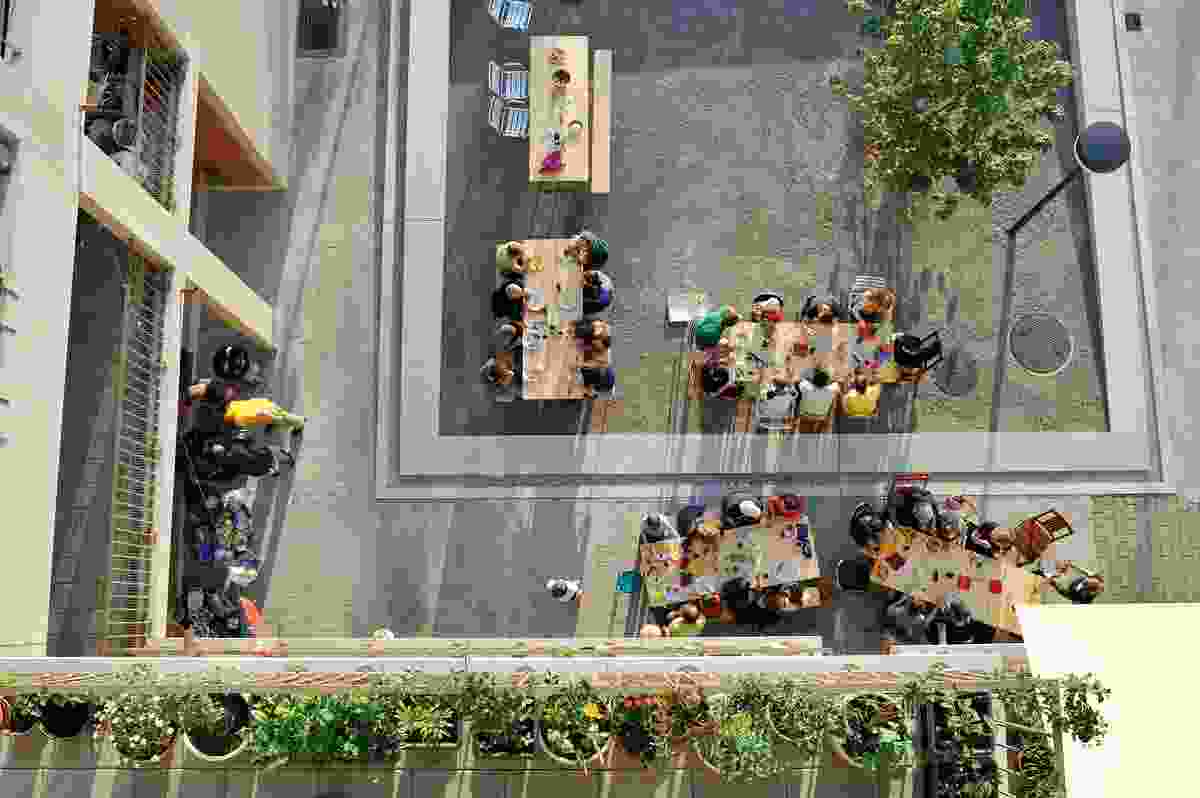 Kraftwerk 2 (2011), designed by Adrian Streich Architekten AG, was developed by the Kraftwerk1 collective – one of the youngest housing cooperatives in Zurich. 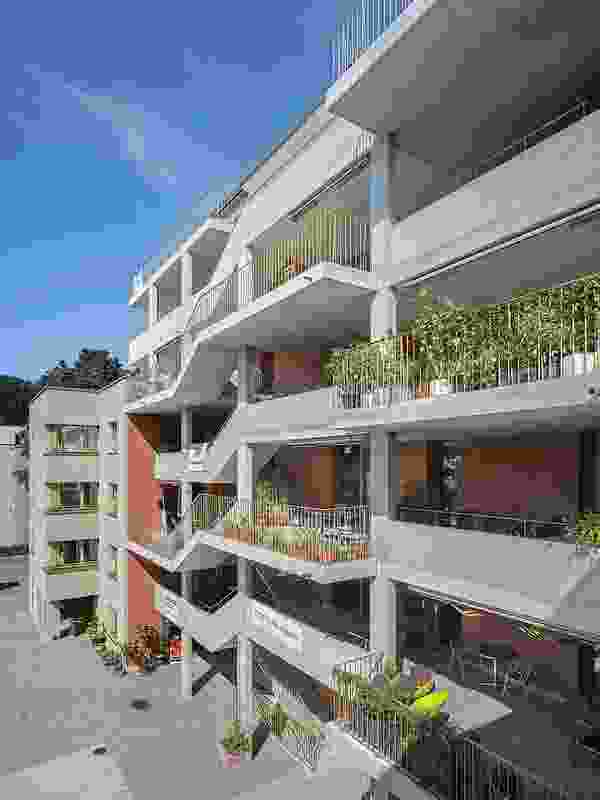 The converted orphanage houses a combination of “cluster,” shared and traditional apartments and is a radical study in communal living. 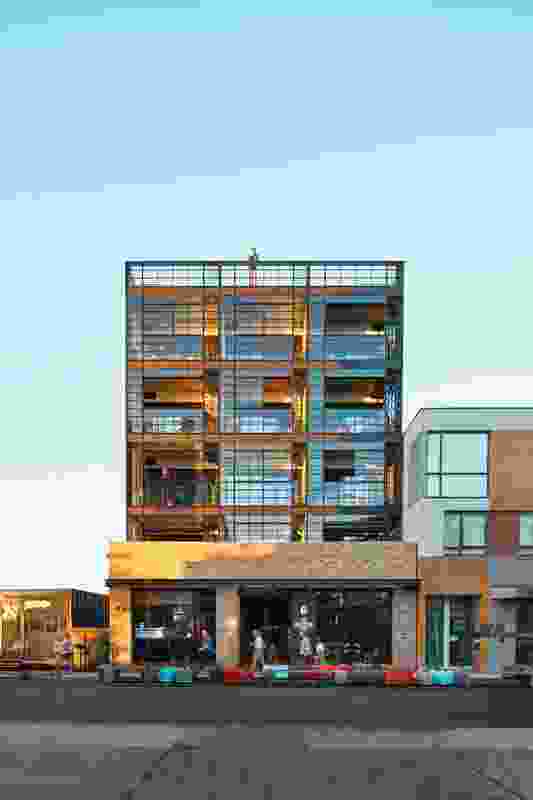 In Melbourne, Breathe Architecture’s Nightingale 1 development (2017) is part of a body of architectural work, emerging globally, that experiments with new kinds of collectives.