The aspirations of a private school on Sydney’s North Shore are articulated by Bligh Voller Nield.

The two-storey polycarbonate-clad volume containing a learning centre cantilevers over a manganese brick base.

In 2008 Bligh Voller Nield (BVN Architecture) was invited to participate in a design competition for the Ravenswood School for Girls’ Senior School in Sydney’s north. The competition, which focused on a completely different part of the campus to the building that is under review here, allowed BVN to develop an appreciation of the school’s broader ambitions and an understanding of the shortcomings of the campus layout. This resulted in the architects convincing the school that a comprehensive masterplan would help it to realize its ambitions in a considered, coordinated manner, and the competition scheme was abandoned.

The masterplanning process began with extensive workshops with stakeholders ranging from kindergarten students to alumni who were well into their seventies. In one consultation, students were asked to identify their most and least favourite places within the school grounds by sticking post-it notes on a site plan. Peace Lawn, which staff had assumed was a loved, sacrosanct space at the heart of the school, was made invisible with a flutter of yellow flaps. The girls found this rolling lawn an uncomfortable and uninviting place that lacked intimacy.

As a result of the process and in place of the competition scheme, the school embarked on the creation of the Mabel Fidler Building, which now occupies a portion of Peace Lawn located at the centre of the campus. Symbolically and physically it is the new social hub of the school, containing flexible teaching spaces, a dance studio, a resource centre and a cafe. Where Peace Lawn was once a singular, open, primarily decorative space, BVN, in association with landscape architecture practice Oculus, has created a series of intimate sub-spaces where students can congregate in small groups to chatter.

The masterplanning process also identified a general lack of clarity in terms of circulation through the campus, and more specifically that there was no clear way in which to traverse the steep site. There was not a single lift that allowed for equal access or the servicing of buildings. Now, a network of generous timber stairs and covered decks weaves its way from the entry up to a central plaza, and then up again to a terrace space that connects to the uppermost levels of the campus. Access to all levels of the school is now also possible via a lift that is cleverly located between the two wings of the Mabel Fidler Building.

The centrepiece of the project is the new Learning Resource Centre (a library). This two-storey polycarbonate-clad volume precariously hovers above a manganese brick base, announcing the entrance to the school. The material choice is unusual for an institution whose building stock is primarily comprised of conservative brick. BVN principal Bill Dowzer points out that “the girls made it very clear ‘we don’t want brick’.”

The double-skin facade system is interesting. It is primarily oriented north-west and is made up of a combination of double-glazed windows and areas where a layer of thirty-millimetre polycarbonate is used to shade large expanses of white translucent glass on the inner surfaces and zones of insulated plasterboard. Automated louvres at low and high levels open to ventilate the cavity that could otherwise reach over one hundred degrees Celsius in summer. In winter, the louvres remain closed to retain heat. It’s a shame the opportunities this system may have facilitated are not explored further. For example, it may have acted as a Trombe wall, whereby the warm air could have been directly vented into the interior in cooler periods or linked into the mechanical system to further reduce power demands.

In explaining the conceptual framework of the facade, Dowzer refers to a comment from a client on an earlier project, Campus MLC (Architecture Australia, January/February 2001). He notes, “the client wanted a highly flexible space ‘wrapped in a tent’ … in some ways it’s what we’ve tried to do here, (to) make the facade … almost disappear.” However, downplaying the facade has had the opposite effect: the shimmering, floating form is the new iconic public image of the school, and is even used as part of the school’s marketing collateral. This aspect of the project is most compelling when it is back-lit at night; ironically, this is when the school is least occupied.

The interior is light and enjoyable. The entry space is a particularly powerful, double-height space that is flanked on one side by amphitheatre seating, and on the other with casual seating and full-height glazing that overlooks the school’s main oval to the west. It is easy to imagine this space filled with parents taking shelter from the wind while cheering on the home team on a winter’s afternoon. In other areas, automated operable windows provide for cross-ventilation and offer views over neighbourhood treetops.

Despite its highly effective site-specific responses, commendable environmental achievements and powerful tectonic, this project is not without a perplexing layer. In describing the project, both the users and the architects use terms such as “collaborative workspaces,” “flexible environments” and “social spaces.” This same terminology is de rigueur in contemporary workplace design. No contemporary workplace fitout is complete without breakout spaces, “hot-desking” and a mandatory cafe-style staff kitchen. Contemporary pedagogical trends are demanding similar spaces for students from primary through to tertiary age. These trends may well be preparing students for what they might find in the workplace of the future. The Learning Centre itself, save for the signage and animation by students, might equally provide a vibrant work environment for architects or other professions with little or no change.

Australian educational institutions are wholeheartedly adopting wordwide trends in the design of educational environments, which suggests that they are appropriate here. Equally, it suggests that in the competitive private school market, schools cannot afford to risk ignoring these worldwide trends or wrapping them in “capital A” architecture, thus reinforcing the role of architecture as brand. The notion of architecture-as-brand has a strong lineage within the profession, from Brunelleschi’s designs for the Medicis to Frank Gehry’s Bilbao Guggenheim. In a similar vein, BVN has assisted in rebranding Ravenswood School for Girls by rethinking the way teaching occurs and creating a brave new architectural identity.

In fifty years’ time, when the current cohort are alumni in their seventies, it will be interesting to hear what they have to say about their time in the Mabel Fidler Building.

It will also be interesting to see how this symbolic project weathers future trends of educational environments and the harsh Australian climate. 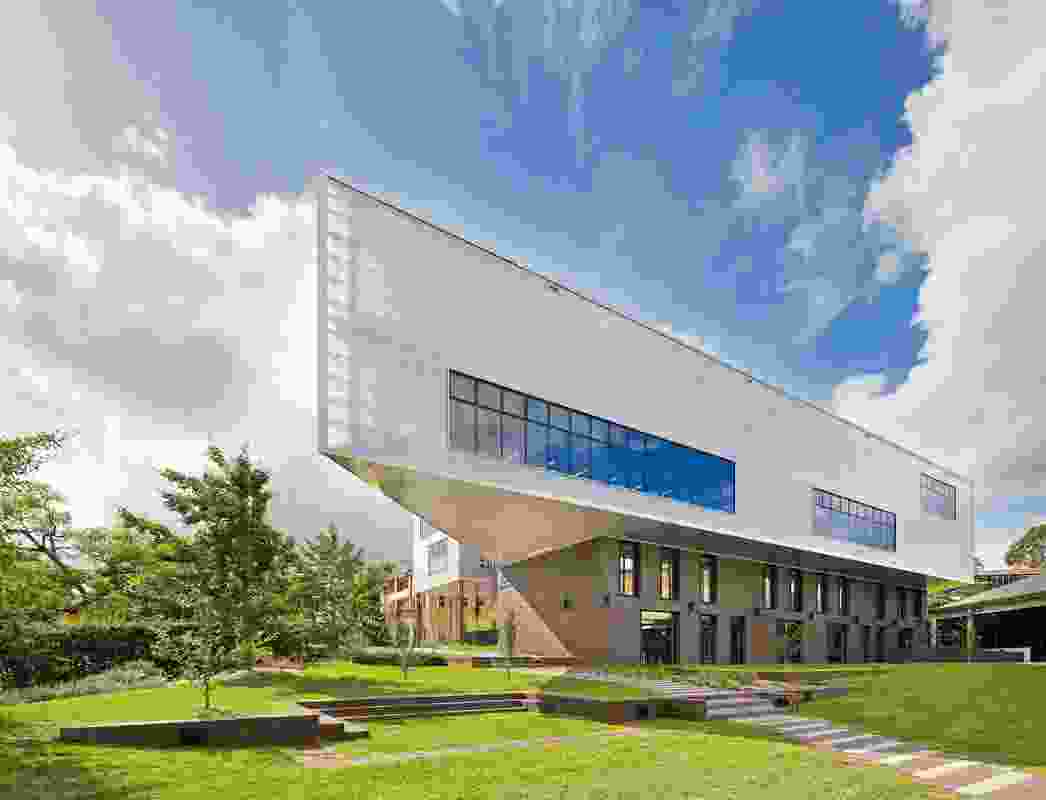 The two-storey polycarbonate-clad volume containing a learning centre cantilevers over a manganese brick base. 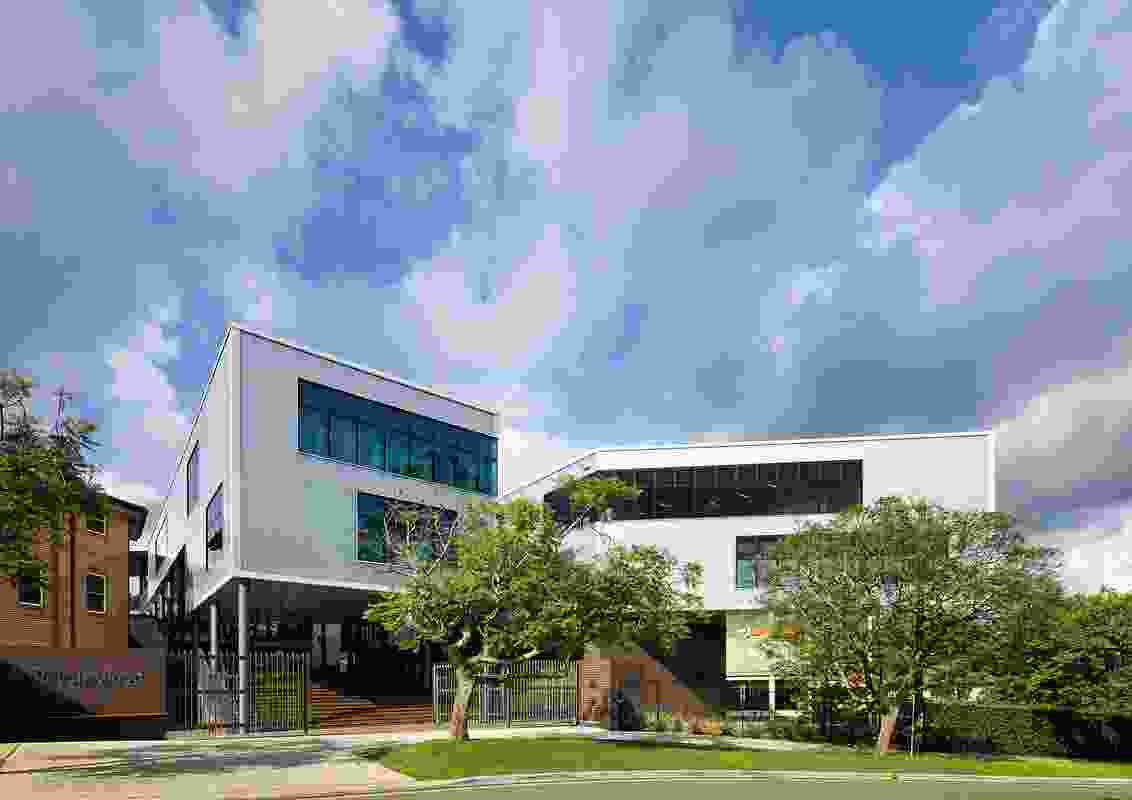 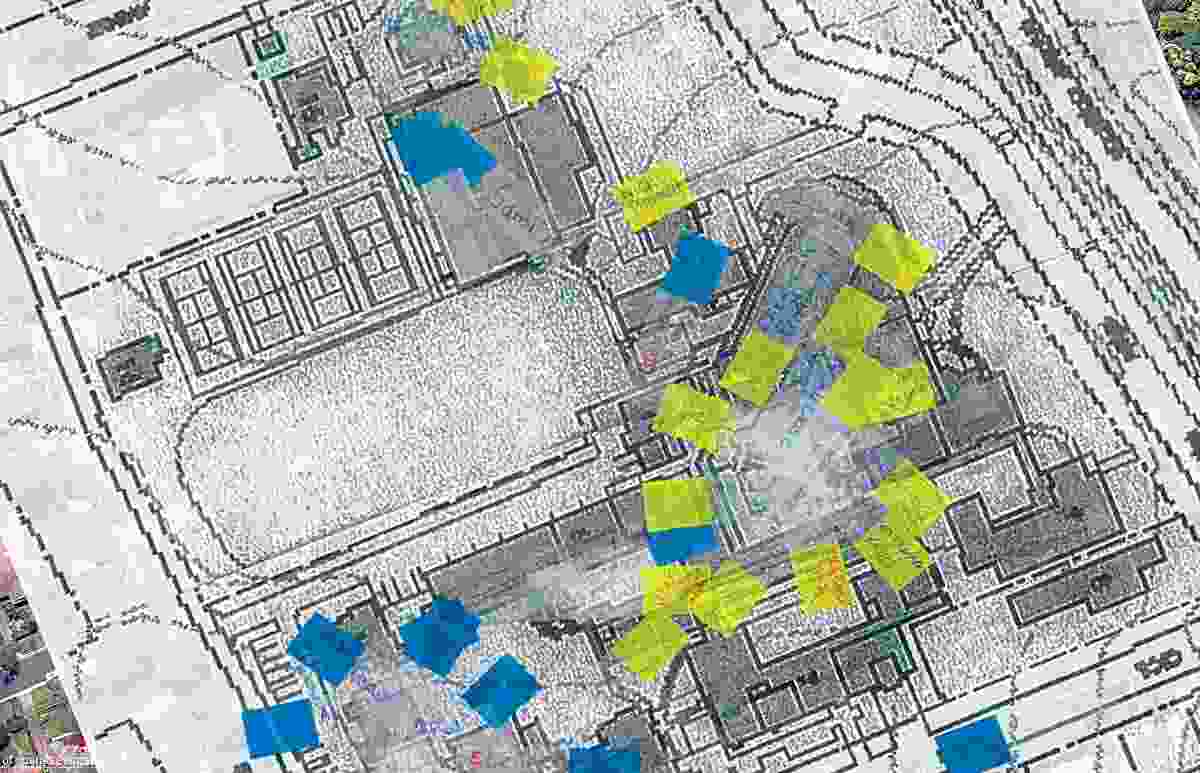 Students used sticky notes to identify their most and least liked locations on a site plan. 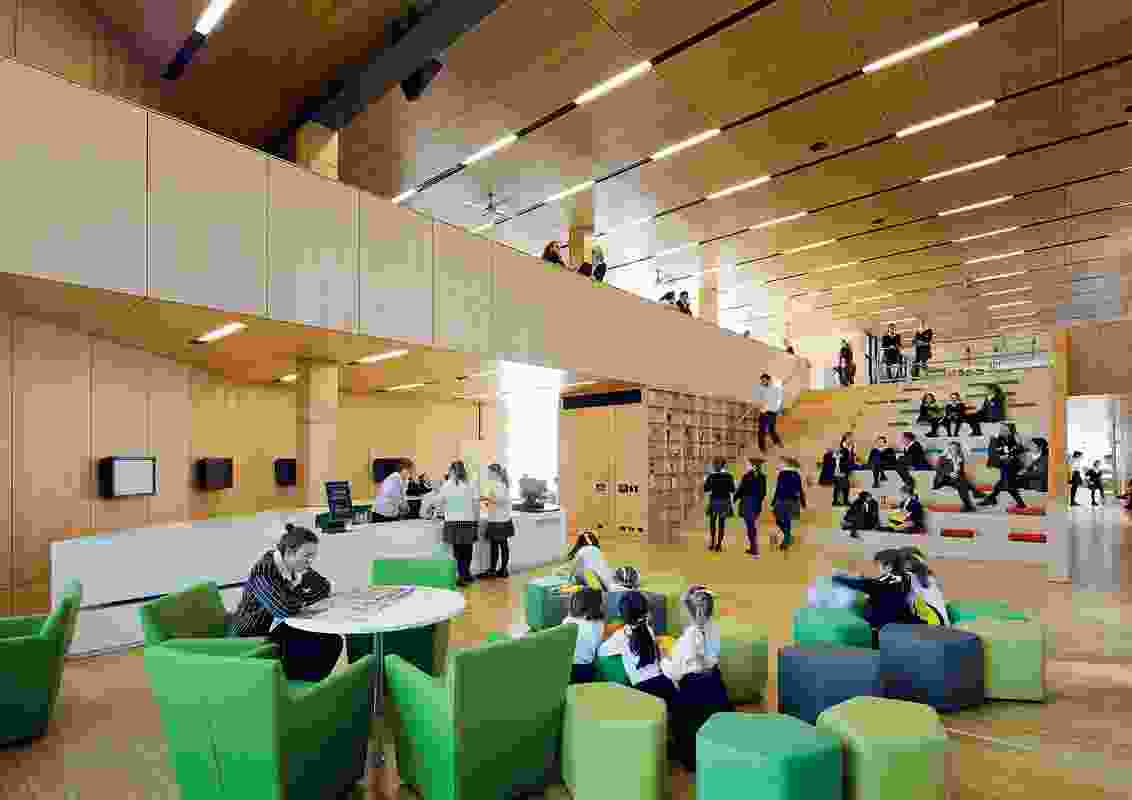 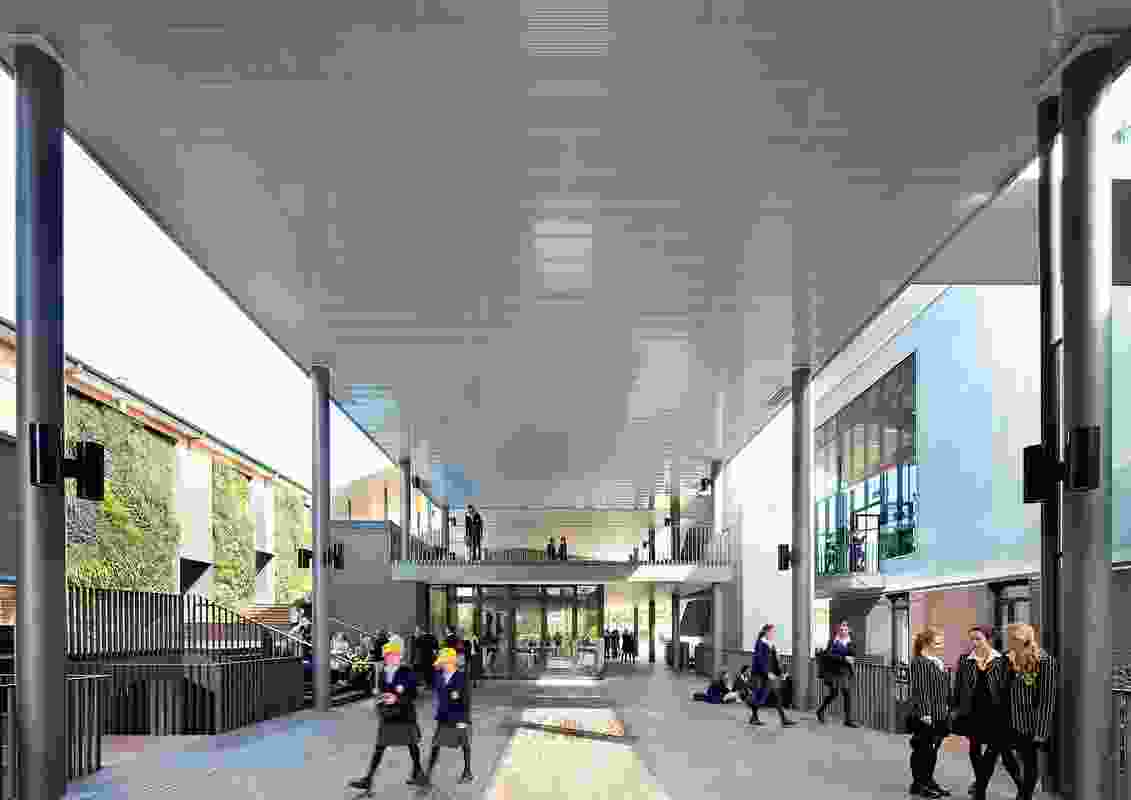 The project creates a new social hub for the school that includes a cafe in the centre of the external thoroughfare. 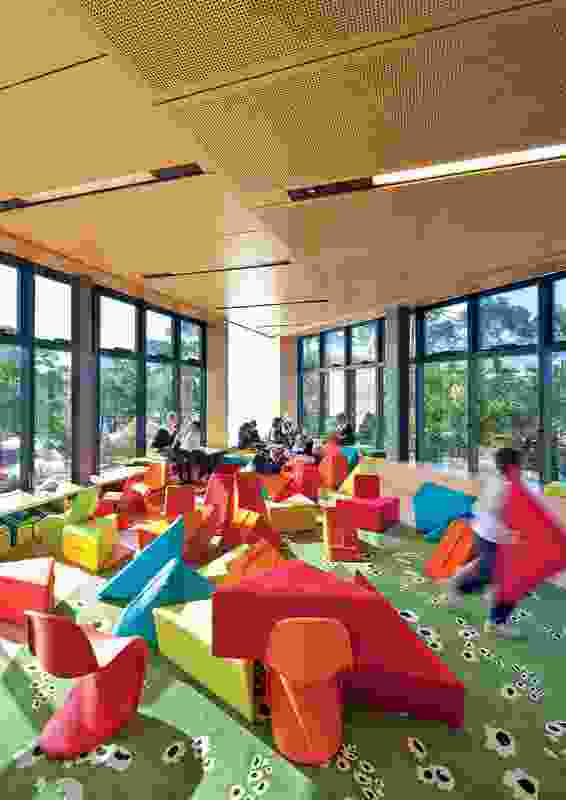 The automated operable windows in the library provide cross-ventilation. 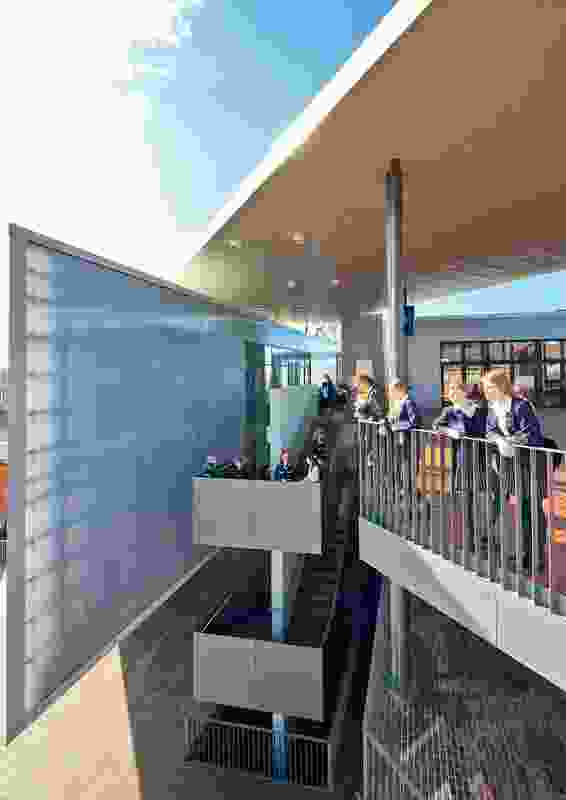 A new outdoor terrace provides views of matches being played on the adjacent playing oval. 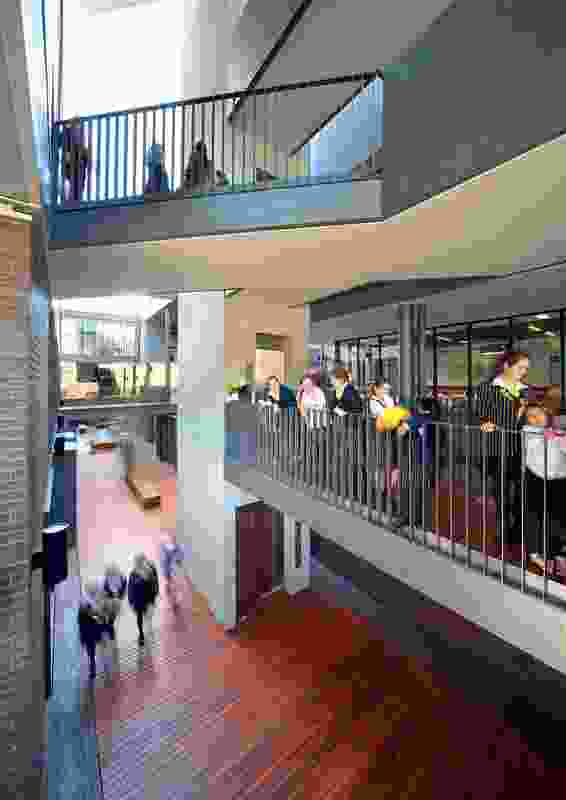 A central plaza is connected by split-level stairs to other parts of the school. 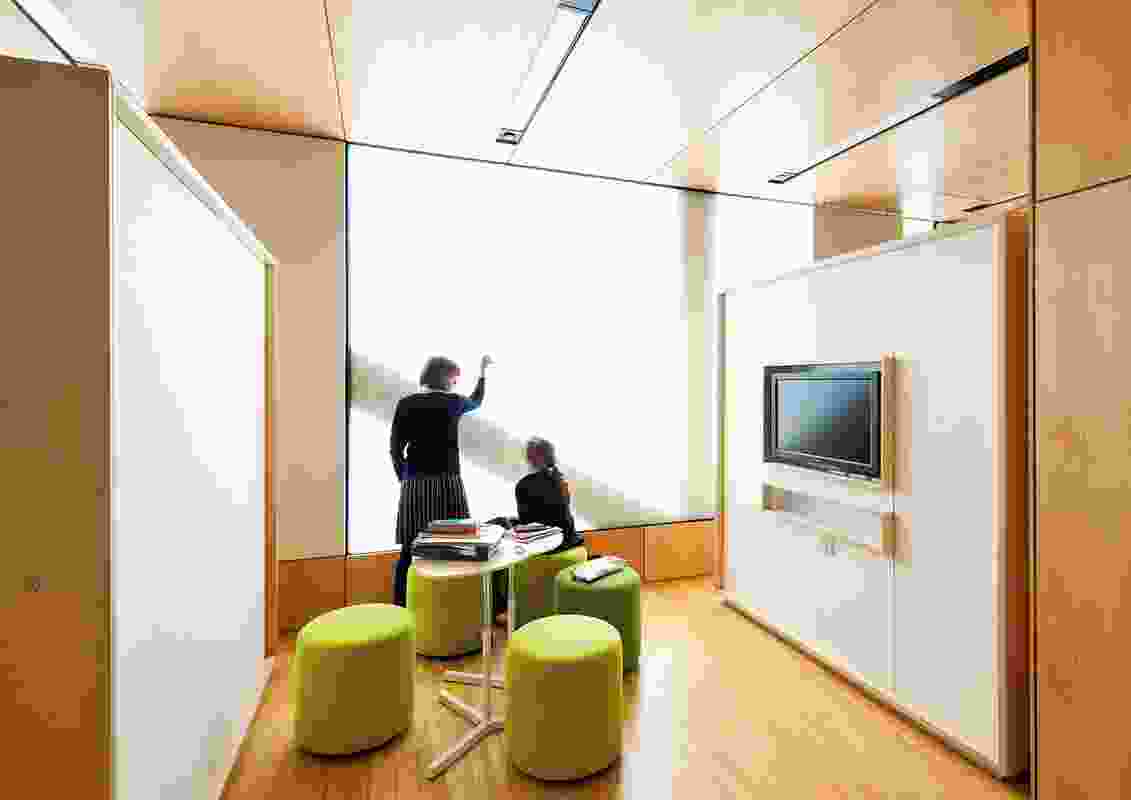