In the regional Victorian city of Bendigo, a small civic project by Williams Boag Architects goes beyond its initial brief of creating a safe waiting area for people after dark, to become a community hub, day and night.

At a time when many public commissions are identified or identify as “iconic,” Williams Boag Architects has shown that a project can share the limelight and still make a big impact. While this Bendigo project aspires to be as visually unobtrusive as possible, it has still provided widespread benefits to the local community.

Driven primarily by a long-term need for a safe, accessible space for the weekend crowds who emerge from Bendigo’s bars and clubs in the early hours of the morning (facing long waits for taxis due to a limited supply), the new public infrastructure project contains a toilet block, a shelter with seating and queuing systems.

The amenities are in Howard Place, which abuts the fine heritage-lined street of Pall Mall, as well as the adjacent Rosalind Park. This position certainly raised concerns among some locals who felt that a new structure, particularly one of this nature, would overshadow the heritage streetscape and historic monuments such as the statue commemorating the gold rush. Williams Boag Architects, which had been involved with the design since inception in a strategic review role, advocated for this location because of its proximity to the main nightspots in town. The architects felt it was important to locate facilities such as these where they are most needed.

Director Peter Williams says they were confident they could design a contemporary structure that would not impinge on the heritage character of the area. A “disappearing act” was achieved by what Williams calls “dematerialization.” The transparent polycarbonate roof is the perfect height to be obscured by tree canopies, barely noticeable until one is directly under it. In itself this interaction has benefits. During summer the leafy trees offer shade and in winter the bare branches allow sunlight to drench the space. The main solid element, the ellipse-shaped toilet block, appears more permeable due to its elevated position and contoured form – without a noticeable end, the mass dissolves as one circles around it. Even its vertical cantilever supports offer the twin benefits of being visually slim and “unclimbable.”

Williams says a pivotal moment was when the perception of the project changed from a structure specifically designed to counteract the occasional violence and misbehaviour caused by crowds of fractious revellers with a few drinks under their belt, to a new addition with the potential to benefit the city twenty-four hours a day. As if fulfilling its own prophecy, the public space has become a popular meeting place for tourists, the toilets are now used by customers of nearby cafes and restaurants, and the wi-fi hotspot attracts school kids before and after class. Details, such as bins with lids wide enough to fit those ubiquitous pizza boxes, add to the considered amenity offered to its users.

The ultimate test of any public project is the response from the people who use it. Not only have some of the locals been heard praising the workmanship of Howard Place, but many of its original detractors have since congratulated Williams on the outcome. 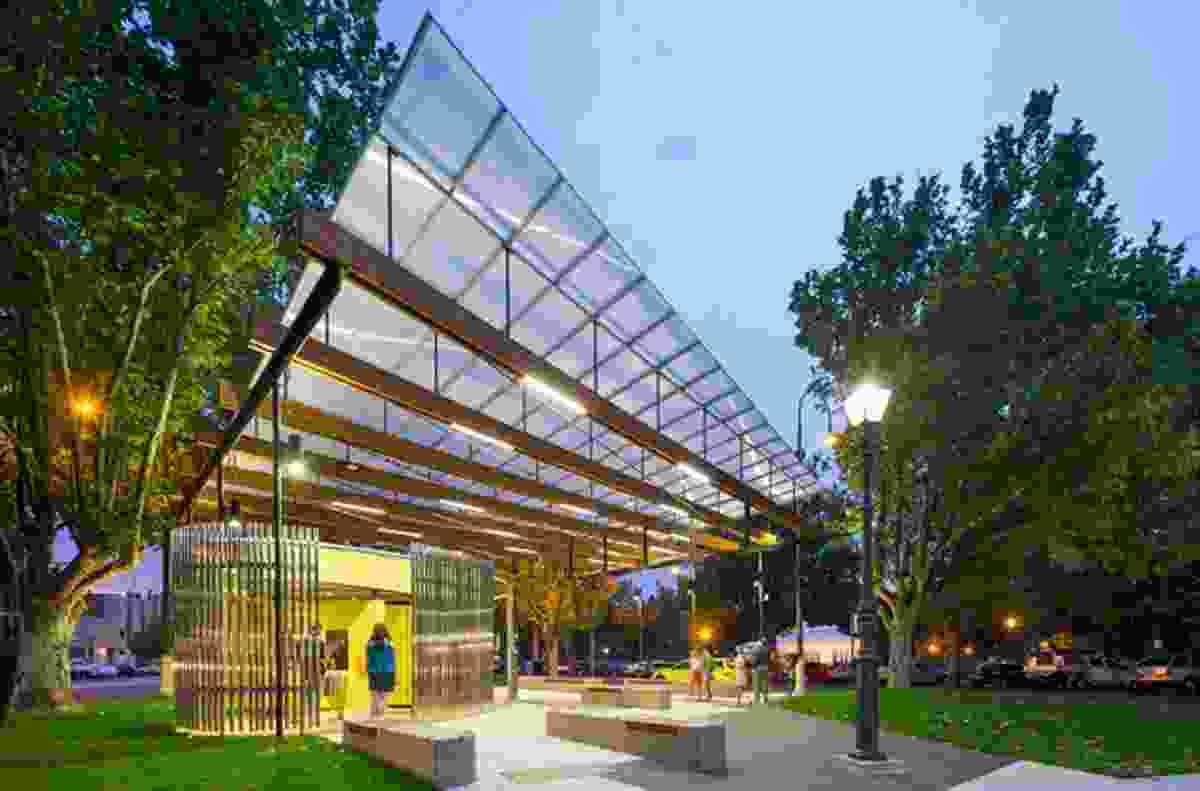 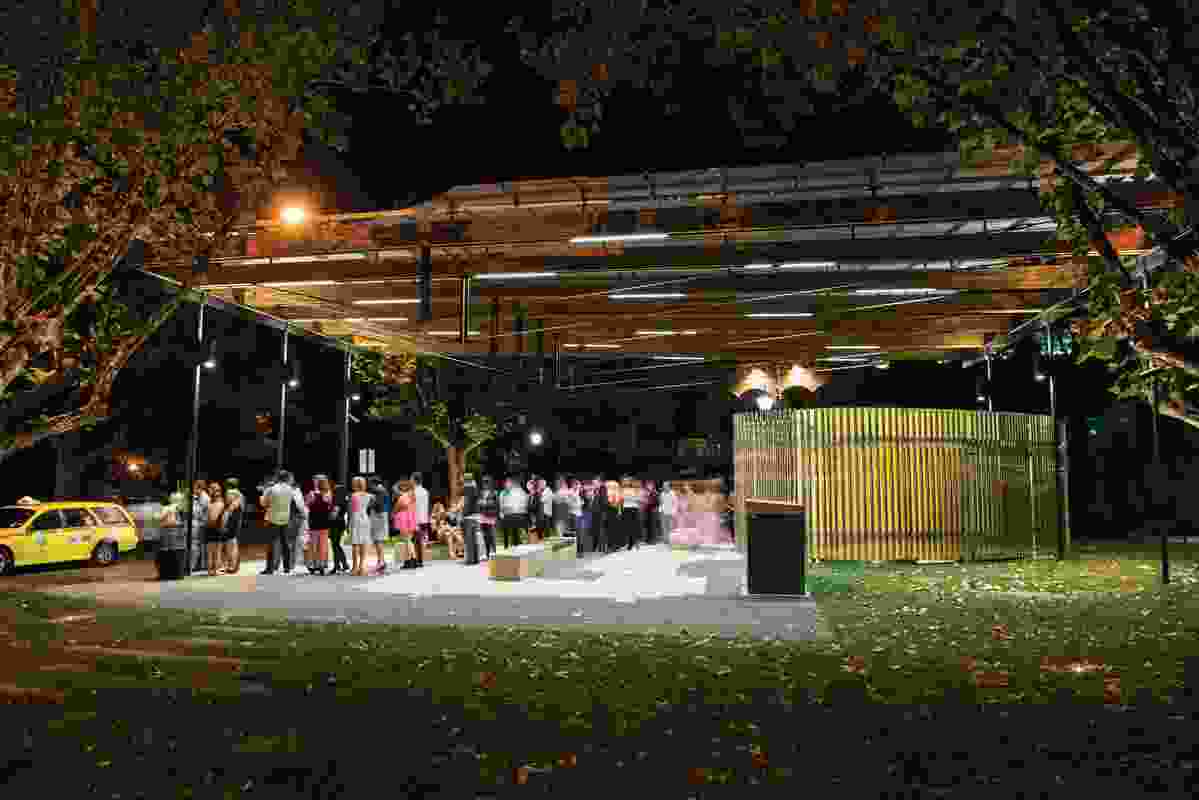 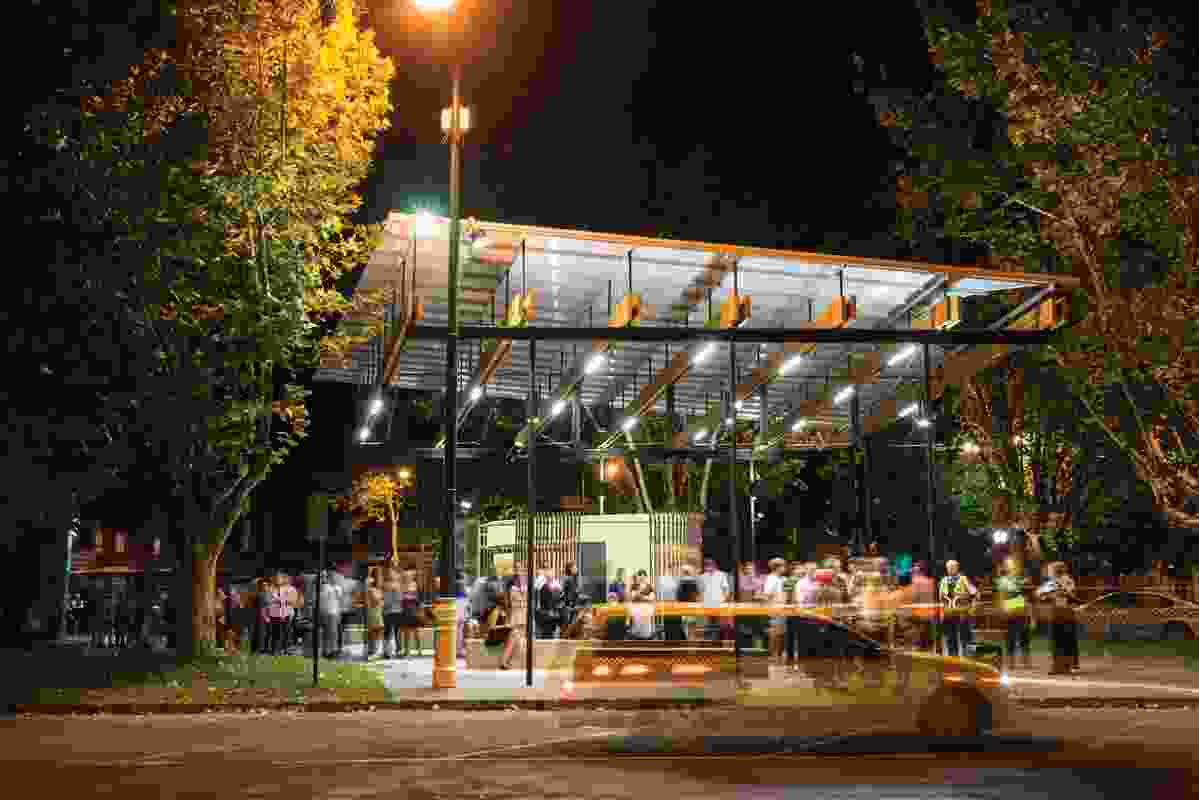 A well-lit waiting spot for people who have left local pubs at night. 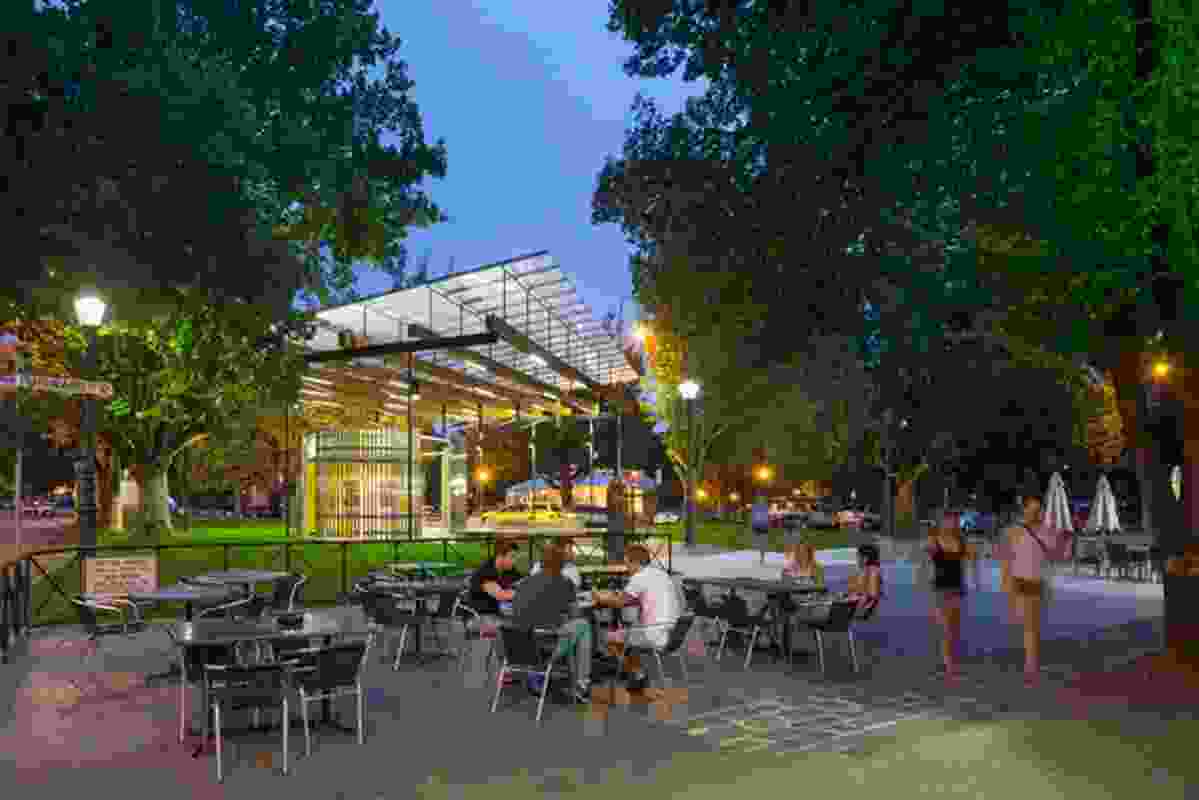 Howard Place extends the civic space towards the nearby cafes. 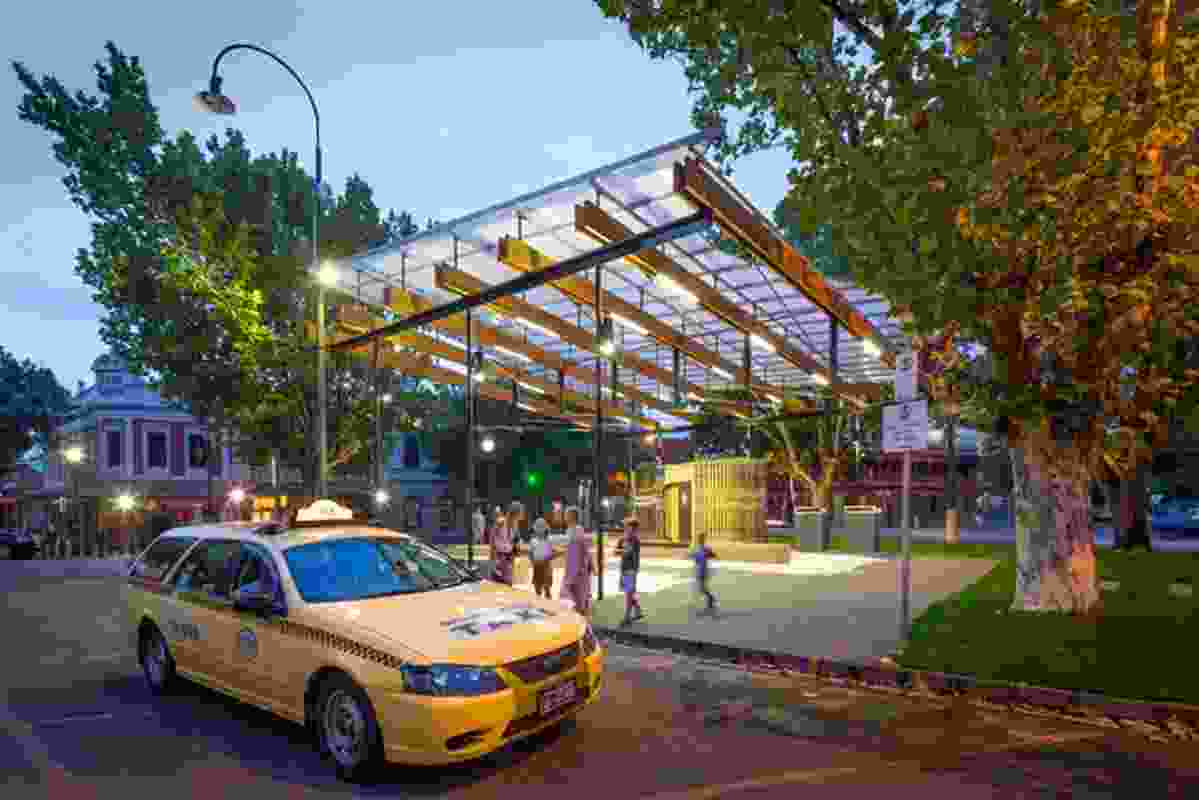 “Dematerialized”: the clear roof is set within the treeline. 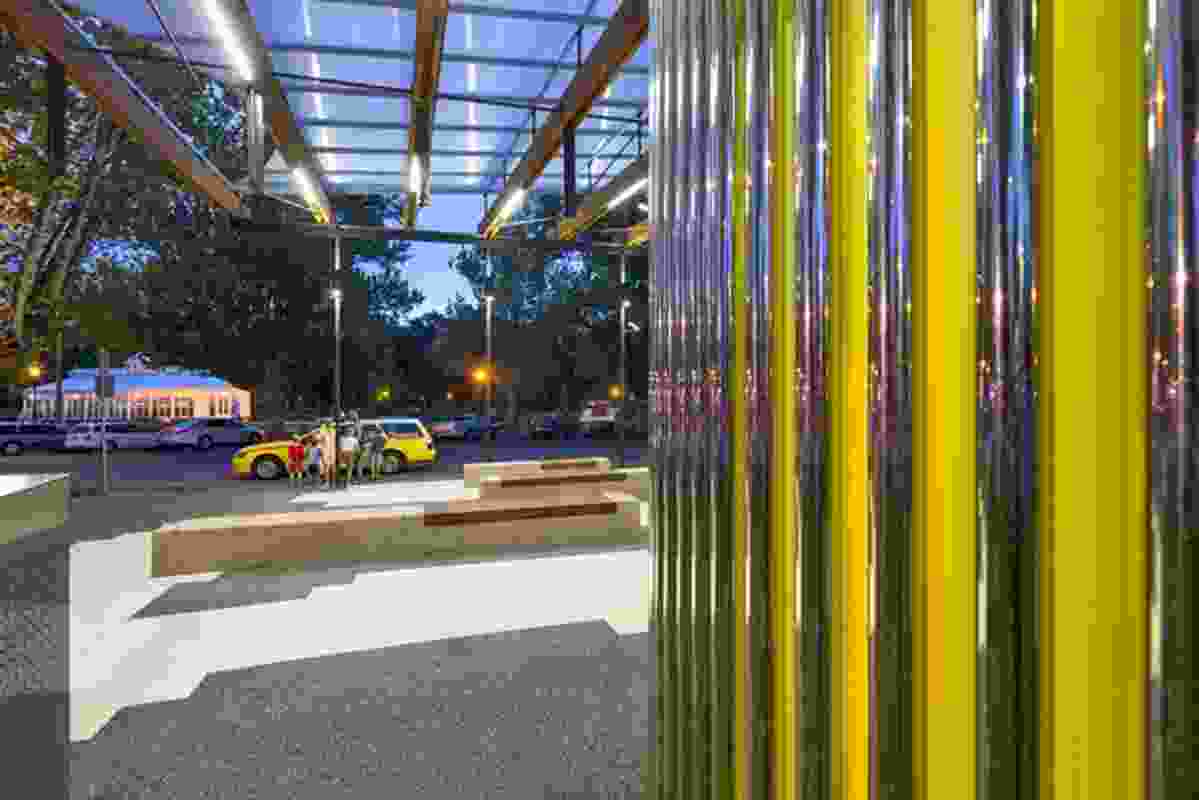 The facility is lightweight and largely transparent. 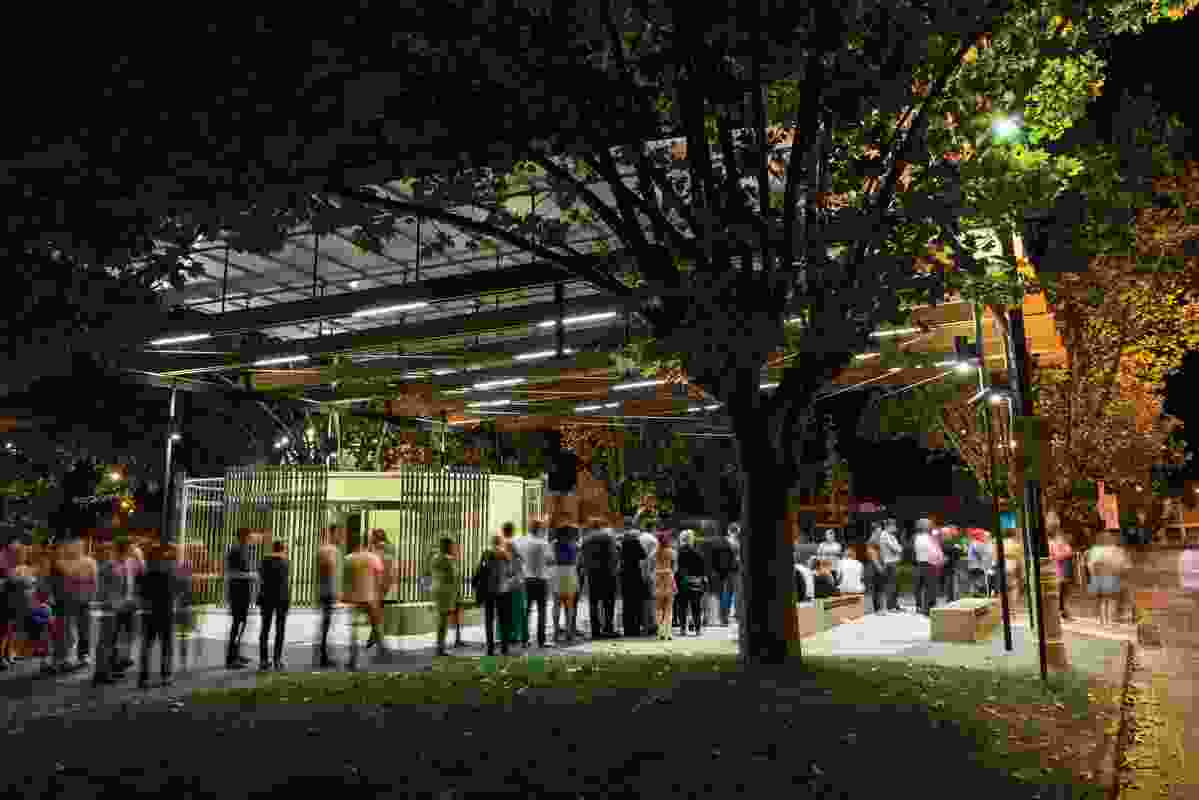