From ‘unemployable’ graduate to Gold Medallist: Ian McDougall in conversation

Ian McDougall was the joint winner of the Australian Institute of Architects’s 2016 Gold Medal, along with the other co-founders of ARM architecture, Steve Ashton and Howard Raggatt. For almost thirty years, ARM Architecture has had a transformative effect on architecture in Melbourne and around Australia. Here Ian McDougall speaks with Natalie Bradburn following the 2017 New Zealand architecture conference about how ARM Architecture formed and how it has since developed. He discusses “architecture of genuine questioning,” “the fetishization of detail” and the absurdity of the rejection of colour.

The Geelong Library and Heritage Centre by ARM Architecture.

Natalie Bradburn: How did you initially get together with your partners Steve Ashton and Howard Raggart?

Ian McDougall: Me and eight others started this get-together in the pub (The Halftime Club). Steve and Howard were members of that eight; that’s when I got to know them. We were graduates then and, in between university and forming ARM, all of us ran our own practices.

It was the end of the ’70s and there was a recession, so there was hardly any work, which was one of the reasons we couldn’t get any work, because no one was hiring unless you worked for free. We were also kind of unemployable, which is why we had a practice. We were too difficult to work with or something. So we just hobbled around until we decided to team up.

NB: How did you collaborate within the practice at first?

NB: You’ve worked on a diverse set of projects with quite different agendas. Do you have a consistent approach you use every time, or does it vary with each client and project?

IM: The project and the client set a tone and direction for where the project will go. We work through generation of form, programme and narrative, all at the same time. Out of that comes endless refinement and feedback from the client on whether they want that or not.

NB: Your work is often described as “playful” or “fearless”. Are these descriptions accurate?

IM: The fearless bit – you don’t feel fearless: you feel like this is the right thing to do. You probably feel more forceful than fearless. When we design, we deliberately try not to censor the work. There is a tendency for architects, particularly working in the public realm, to pull back. Before they even show it to a client, they might say, ‘Oh, I’m a bit worried about what they might think.’ We never do that; we always present the proposition that we believe is the right one. So, if that’s fearless it doesn’t feel like that; it feels like we are doing our job, which is advocating to the owner or the client what we think is the right thing.

We do work by attempting to explore contrary activity, to try and expose preconceptions about things. Howard refers to it as an architecture of genuine questioning. So you are constantly questioning the conventions of architecture, or what people would believe to be the predictable thing. But it’s not just about being contrary: it’s also about exploring. For instance in the use of colour, colour is all around us; why is it that it’s become this sort of abject thing? Why is it that we are so puritan about the use of colour? We see people painting their houses in a colourful way – they paint their house in the colour of their football team, across the walls and down the roof, and we go, ‘Oh what a goofball!’ What is it that makes people so afraid of colour?

It is interesting that whenever we use colour it becomes the most contentious aspect. If you are doing schools, people say you can’t have a red room for a child because it’ll make them go crazy. It’s just absurd. And they’ll say, ‘Oh we’ve done studies’. Yes, well show us the studies. It’s like saying the inside of a baroque church will make people go crazy.

NB: Howard has also mentioned the idea before about the fetishization of the detail, which is a compelling stance to take when architecture is so often revered for being all about the detail.

IM: Yes, it is an interesting thing. We think of a conceptual idea and a narrative, and then explore how you turn that into a building. So the exploration of the concept, and vague ideas of materiality, and structure and things like that get resolved later and at the behest of the concept; whereas, that line about the proposition of the detail, somehow you quickly get through and resolve the plan and elevations and all that and then you start doing the detailing. But you’ve missed a phase!

There’s an idea of a building having some sort of core tectonic proposition, where there’s a structure and a skin and they are articulated differently. But there’s another one by Gottfried Semper, his proposition about the fundamentals of architecture are not skeleton/skin and all that. They are the mound, they are the wall, they are weaving, the patterning of the wall. And the patterning of the wall may or may not, and the nature of the wall may or may not, relate to the core fabric i.e the skeleton. So, he articulates it in a different way and I think that’s how we have always approached our design, if we articulate the structure and the panel then it’s about that idea and that is not the essence of architecture. That is not the building blocks of architecture. The building blocks of architecture are a different thing, they are decoration, space, conceptual narrative – they are different things to building up an architecture out of a kit of parts. It’s not about a kit of parts, it’s about a sequence of propositions, and cultural narratives.

IM: I’ve always been interested in the social programme. The Geelong Library was an interesting one because it’s a major piece of public infrastructure and no one is building big public libraries anymore. We’ve recently been doing some work for a social group called Launch that is looking at housing for homeless families. Those sorts of projects are really interesting as well as when we were doing community health work, and social housing. Larger institutional projects are good too. Projects like that keep you alive – projects that are in areas that you know.

NB: And finally, what’s the most interesting piece of architecture you’ve seen lately that wasn’t your own?

IM: One that springs to mind is a 19th-century palace in [Sintra] Portugal called Pena Palace, the wackiest thing you’ve ever seen – something very low-key and very functional [chuckles]. Inside the interiors, every section is done in a different style and the craftsmanship is just absolutely stunning – and it’s completely wacky. And in the same year – and I had never seen it – Hans Scharoun’s Berlin Philharmonic [concert hall, built in 1963]. Those are the two that recently took my breath away.

Ian McGouggall, along with Howard Raggatt, reflected on the work of ARM Architecture and his friend and colleague Stephen Ashton, who passed away in mid-2016, in their A. S. Hook Address.

From ‘unemployable’ graduate to Gold Medallist: Ian McDougall in conversation The Geelong Library and Heritage Centre by ARM Architecture. 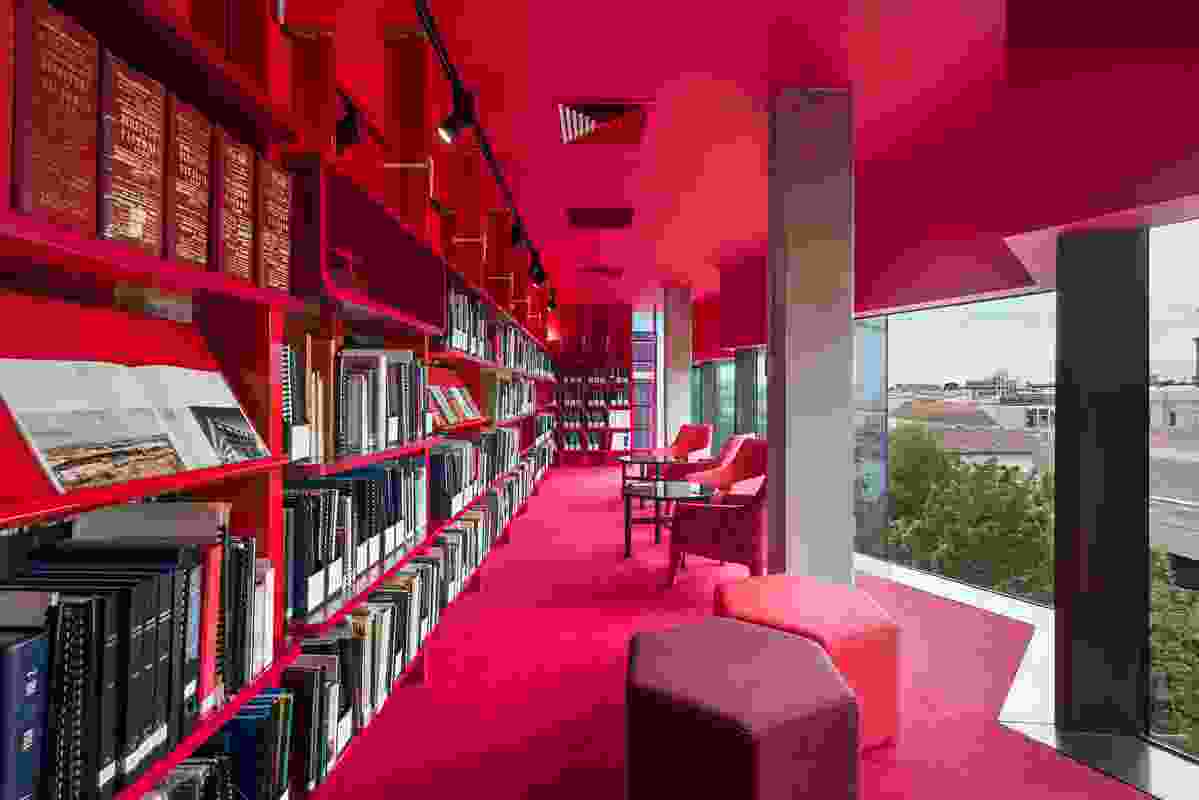 The heritage centre reading room in the Geelong Library and Heritage Centre by ARM Architecture. 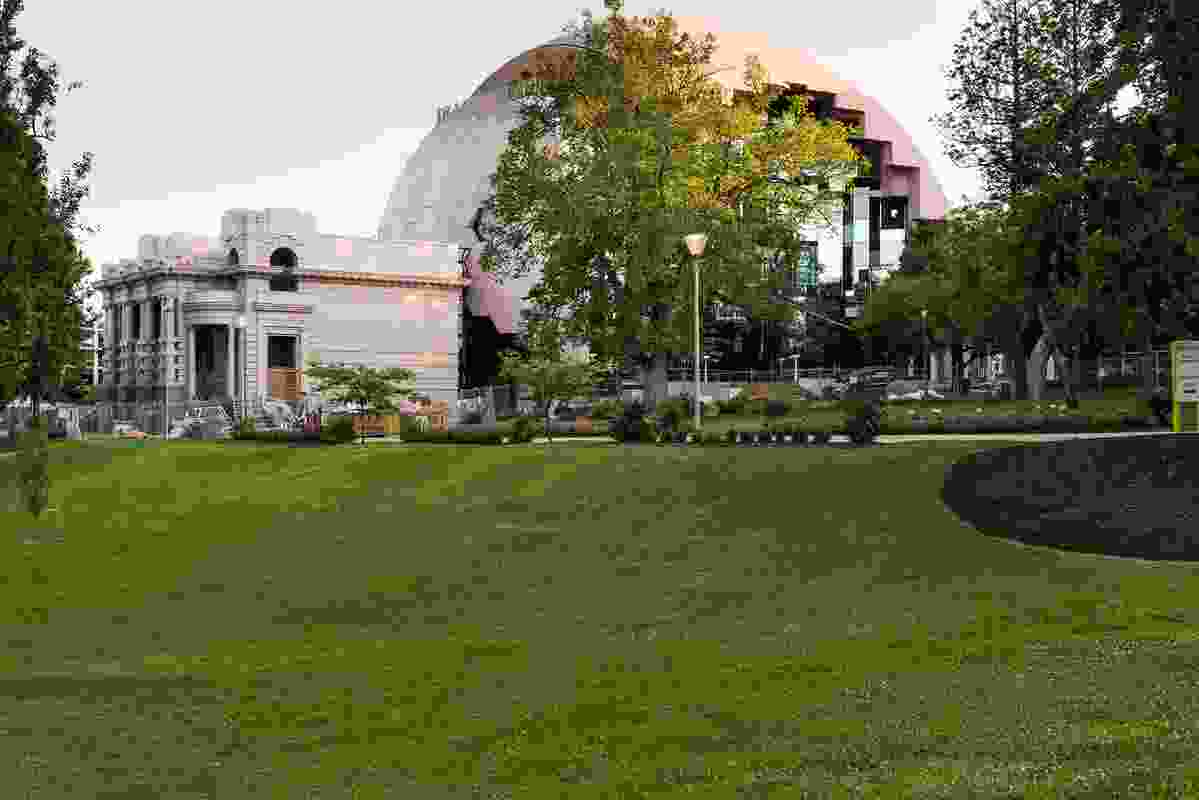 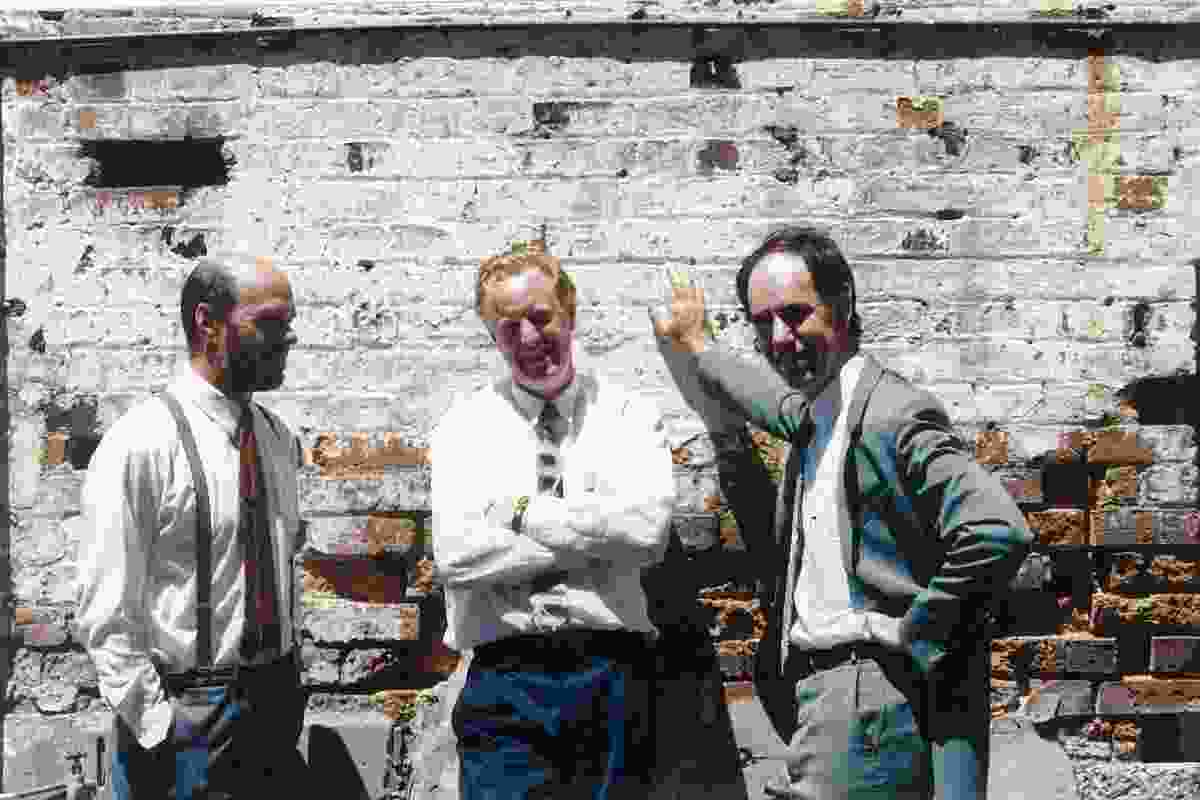 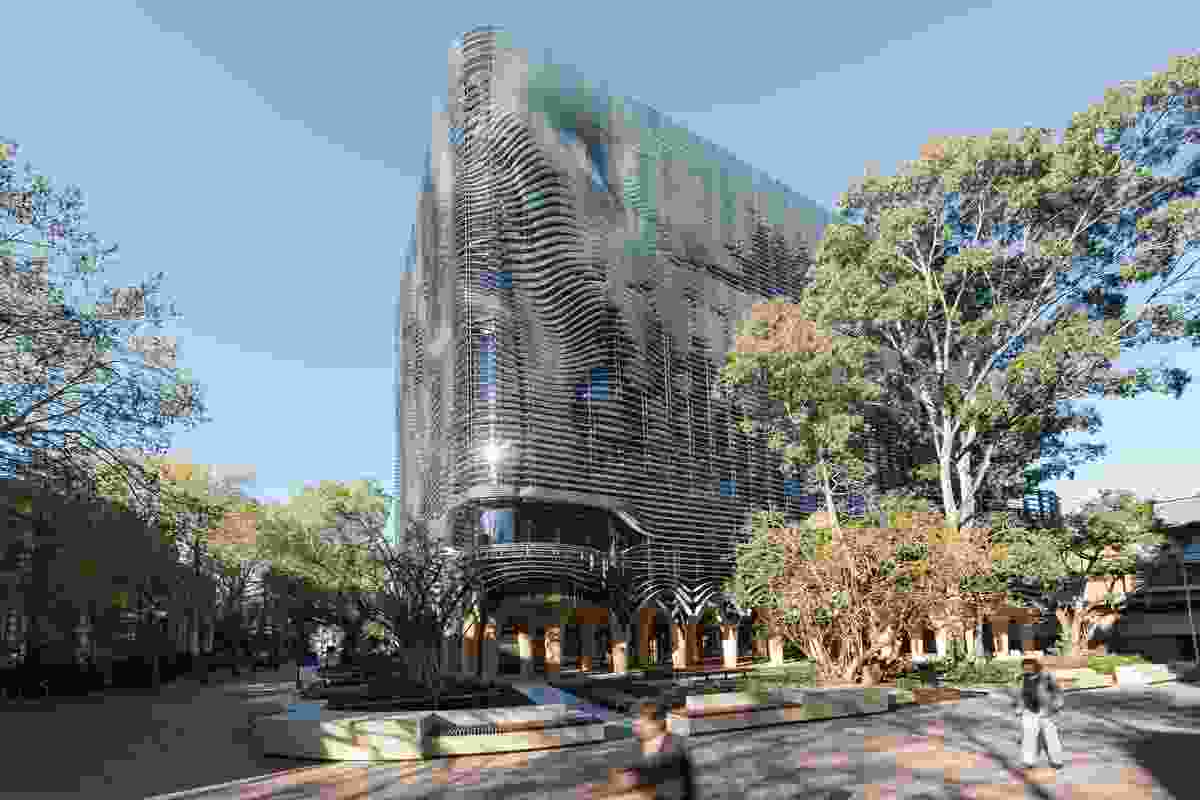 Arts West at The University of Melbourne was a joint project by ARM Architecture and Architectus (2016). 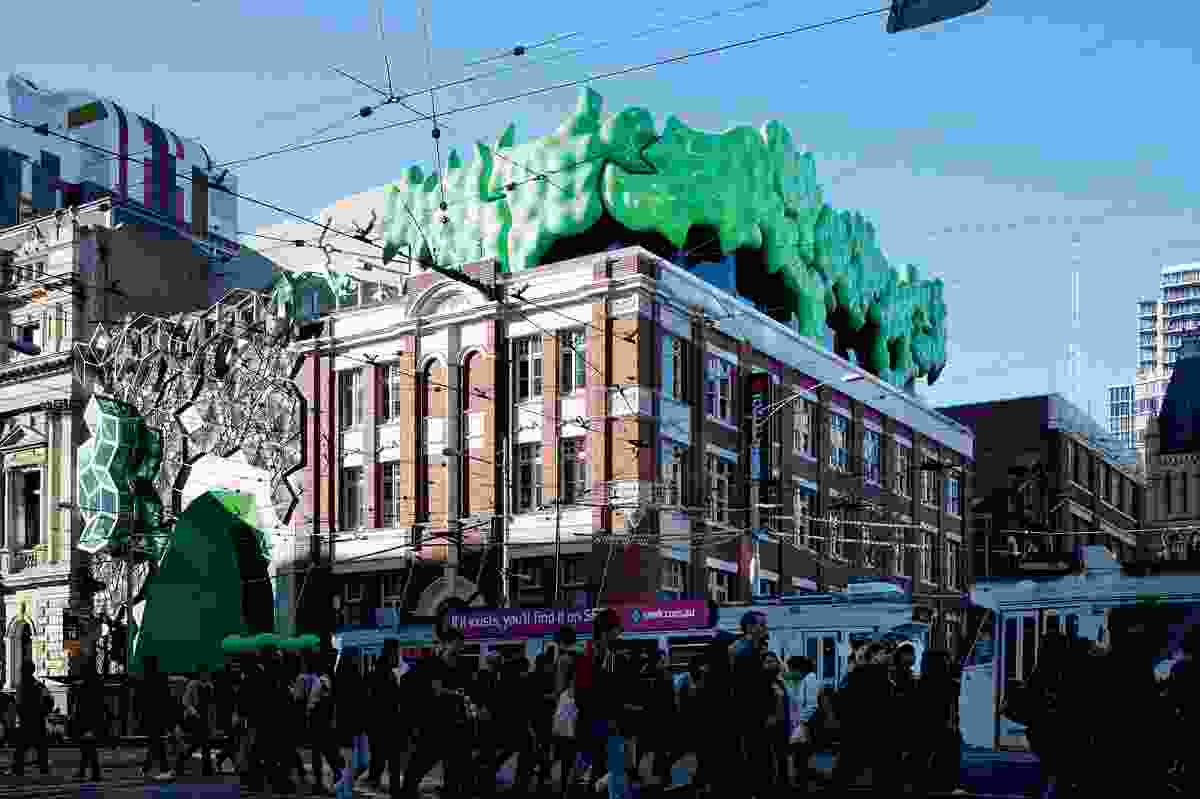 Ian McDougall is an alumnus of RMIT. In 2011 ARM Architecture transformed the university’s Building 22 with knobbly green protrusions, known as the “green brain.”