The old and new components of this house are strategically allocated different identities, but there is no attempt to mask or transform the old.

A glazed gap is left between the old and new parts of the house.

Andrew Maynard doesn’t like carbuncles. By this he means a new addition that attaches to and hangs off an old house like a tumour (the other expression Andrew uses to describe this approach). Instead, Andrew Maynard Architects prefers to separate the new parts of a renovation so that they read as two distinct elements. Standing in front of the Ilma Grove house, we see an austerity-style home, circa 1940. From the backyard we see a contemporary vision that would look at home in an international design magazine. This schizophrenic identity could be resolved by the designer, but Andrew enjoys the difference. He is not trying to mask or transform the old. Unlike the carbuncle approach, a space – a glazed gap – is left between the old and the new. Whichever approach the designer takes to an extension, the end result is that outmoded compartments are transformed into an open-plan living/dining/kitchen space. But at Ilma Grove, the new flooring doesn’t match the old flooring. A band of glazing from window to skylight and back to window accentuates the threshold. “You get both languages in one space,” says Andrew. The lack of cohesion is emphasized, enjoyed. The schizophrenia is left untreated. A part of the garden is introduced into a slot in the floor.

The clients first came to Andrew with a brief to demonstrate the sustainable and ethical use of timber. However, a one-hundred-year-old covenant mandates brick walls and tiled roofs. So instead of timber, brickwork wraps the exterior, and Andrew makes it hover weightlessly in defiance of the change in material. (A crucial hidden ingredient is the liberal use of structural steel beams.) Ethically and sustainably sourced timber is used in the window frames and all the new internal linings are low-VOC plywood, an illustration of sustainable reuse that includes reconfiguring the existing bricks.

“It’s probably the most straightforward renovation we’ve ever done,” says Andrew. “A north-facing backyard!” Yet even a straightforward job can involve a level of risk. This small-footprint, two-storey extension hides secret access points to roofs. The provision of a “service deck” is de rigueur for Andrew. The rooftop area is not strictly for inhabitation (because this would be in breach of the regulations on overlooking neighbours), but with the post-inspection addition of astroturf – which doubles as a thermal blanket, moderating the heat gain on the black butanol roof – it becomes a viewing platform to see the CBD to the south and the Dandenongs to the east. Who needs to look into the neighbour’s backyard? The least interesting aspect!

A quirky brick detail provides more than textural delight: as the brickwork was being laid, Andrew asked the bricklayer to rotate an odd brick every so many courses. This created ledges for plants to attach to, which, when they grow, will soften the harsh west sun. But it was also intended to act as a climbing wall for the clients’ young child. Its summit is the unofficial, balustrade-less balcony outside the guest bedroom. “You’d think because I worked at Six Degrees we’d do plenty of on-site designing,” says Andrew, but in the past he has been too preoccupied with taking site minutes and other contractual duties. A newly appointed director of the firm has eased the burden. “Because Mark is doing the admin, I am just wandering round not taking notes, and I can grab the brickie and say ‘Hey, can we do that?’”

An early model shows the deep cantilever that didn’t make it past the heritage consultant. This is the only part of the design that Andrew was forced to change in the planning process; apparently it hovered too close for aesthetic comfort. And he laments, “Oh, it’s a pity – that was a really great cantilever.” Even the shorter overhang still cleverly protects the skylight below. Skylights can be appallingly hot in summer, yet the overhang is so high above the glazed slot that it still lets in plenty of light.

I get the feeling that Andrew thinks the project is on the conservative side of his practice. Or perhaps I caught him at a point in his career where he is applying lessons learned in earlier projects, rather than inventing new things. After all, this is an architect who once famously designed suburb-eating robots, who has a humorous, playful, renegade approach outside the mainstream of architecture in Melbourne. The finishing touch to the project injected a little subversive flavour – a stencil designed by the architect was spray-painted onto the brickwork, free of charge. (The clients needed a little bit of convincing; there is a practice version painted onto a more discreet part of the house.) Risk, play, provocation … Yet the things that seem to be most satisfying for Andrew are those moments where the design simply works – without an instruction manual. During the photo shoot he witnessed the seat-level podium being occupied just like he hoped it might. “We didn’t talk about that with the clients,” he says. On the day we visit, he notices toys lying about the same area. “I wonder if the clients’ child is enjoying the level changes?”

This house received a high commendation in the Sustainability category of the 2011 Houses Awards.

Kitchen
Kitchens for the Trade joinery. 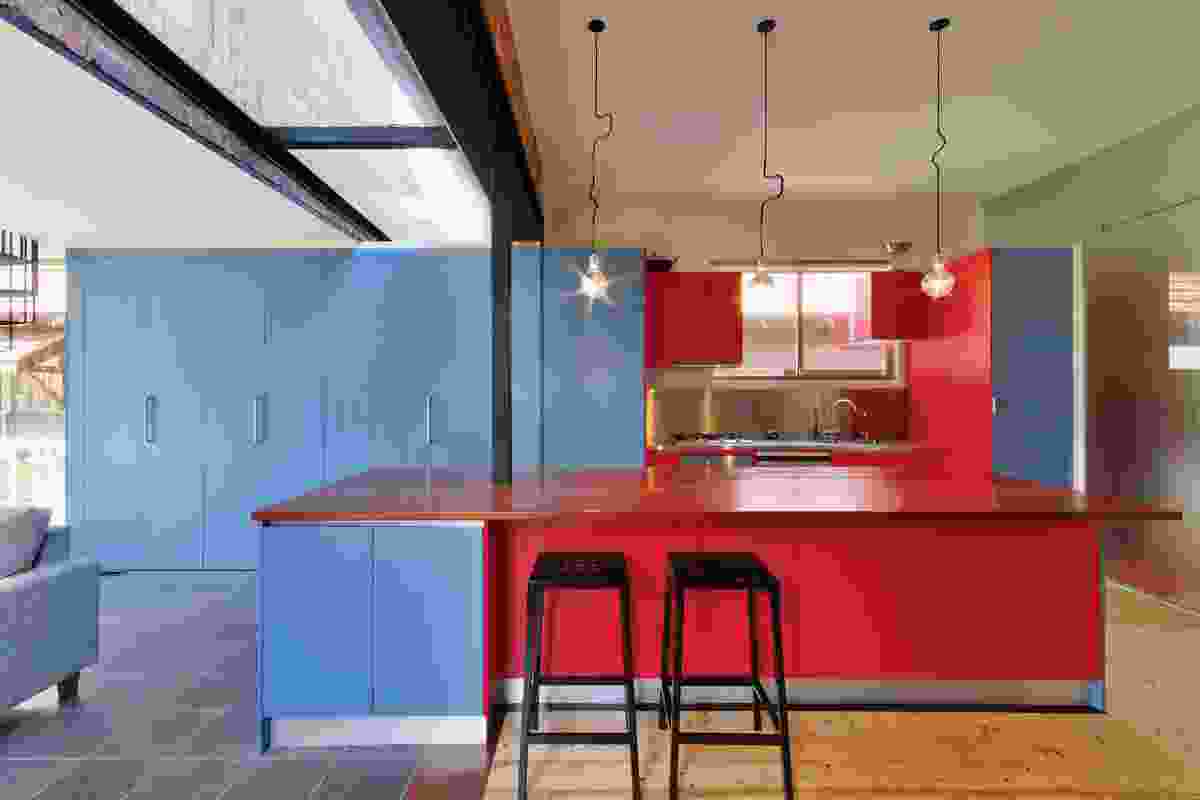 A glazed gap is left between the old and new parts of the house. 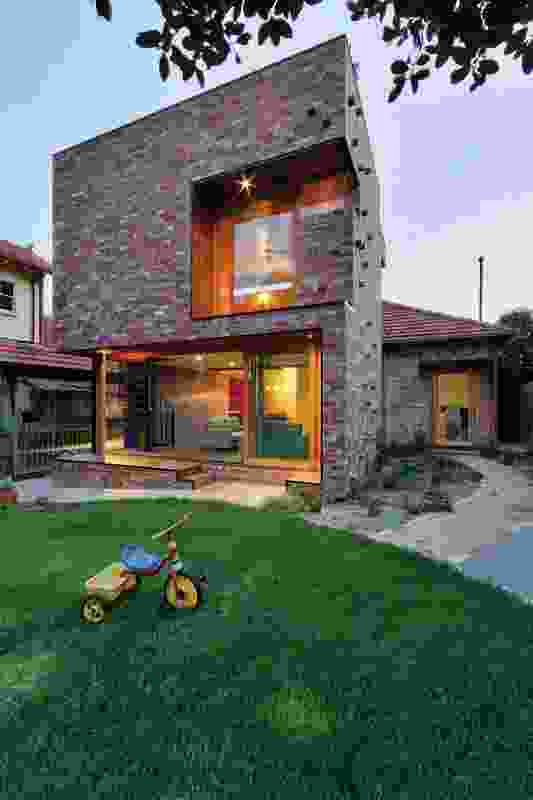 A “contemporary vision” has been placed at the back of a circa 1940, austerity-style home. 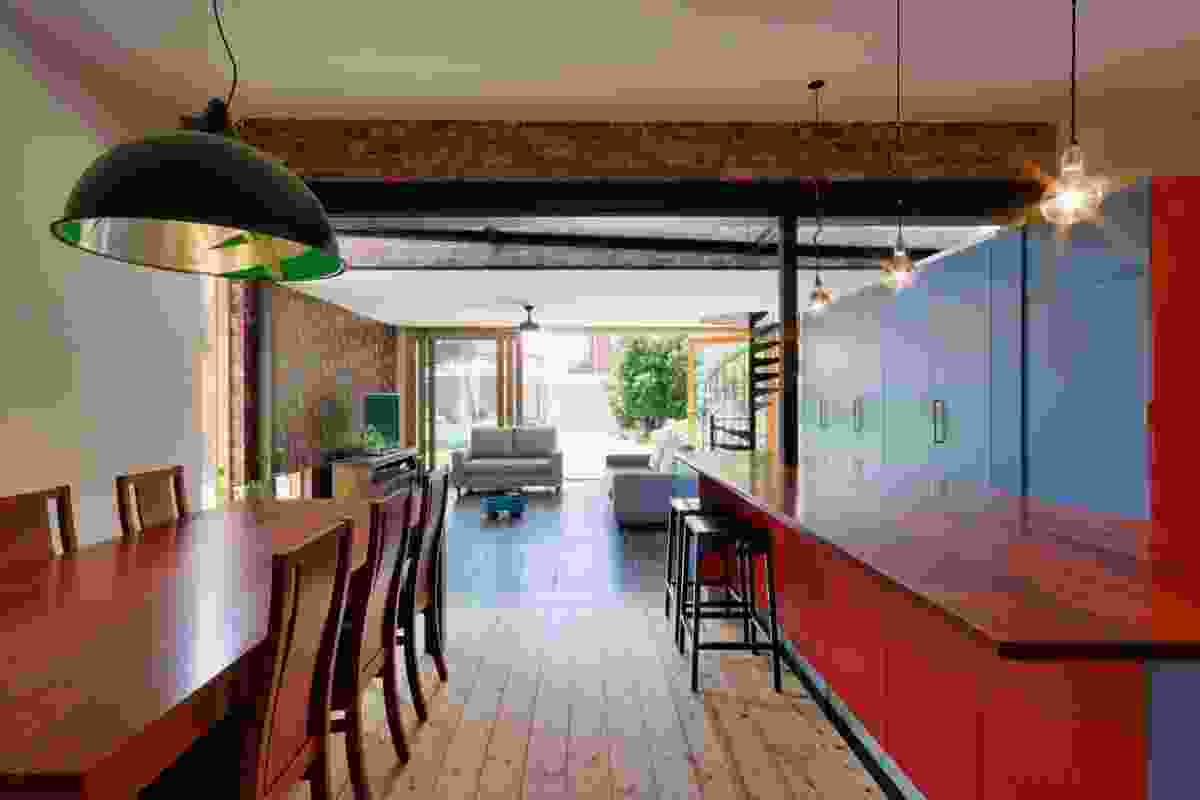 The lack of cohesion is emphasized and enjoyed in the open-plan living/dining/kitchen areas. 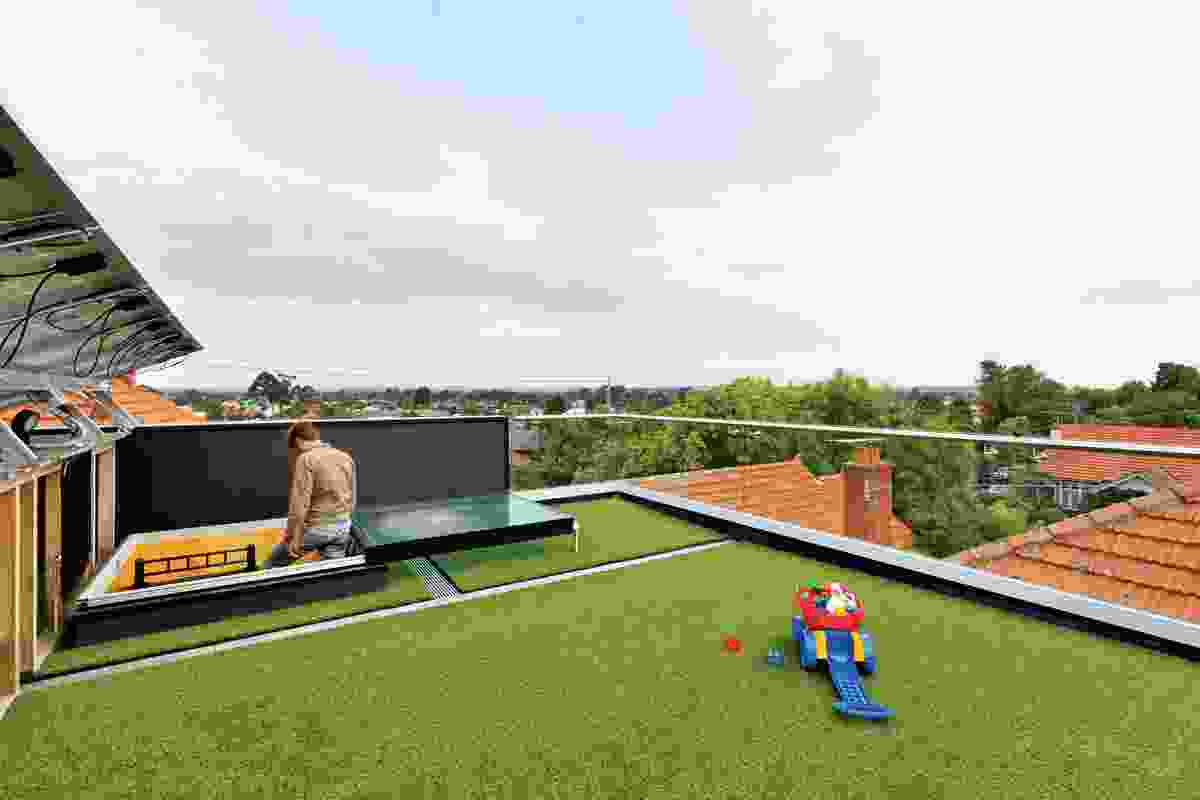 Astroturf doubles as a thermal blanket, moderating the heat gain on the black butanol roof. 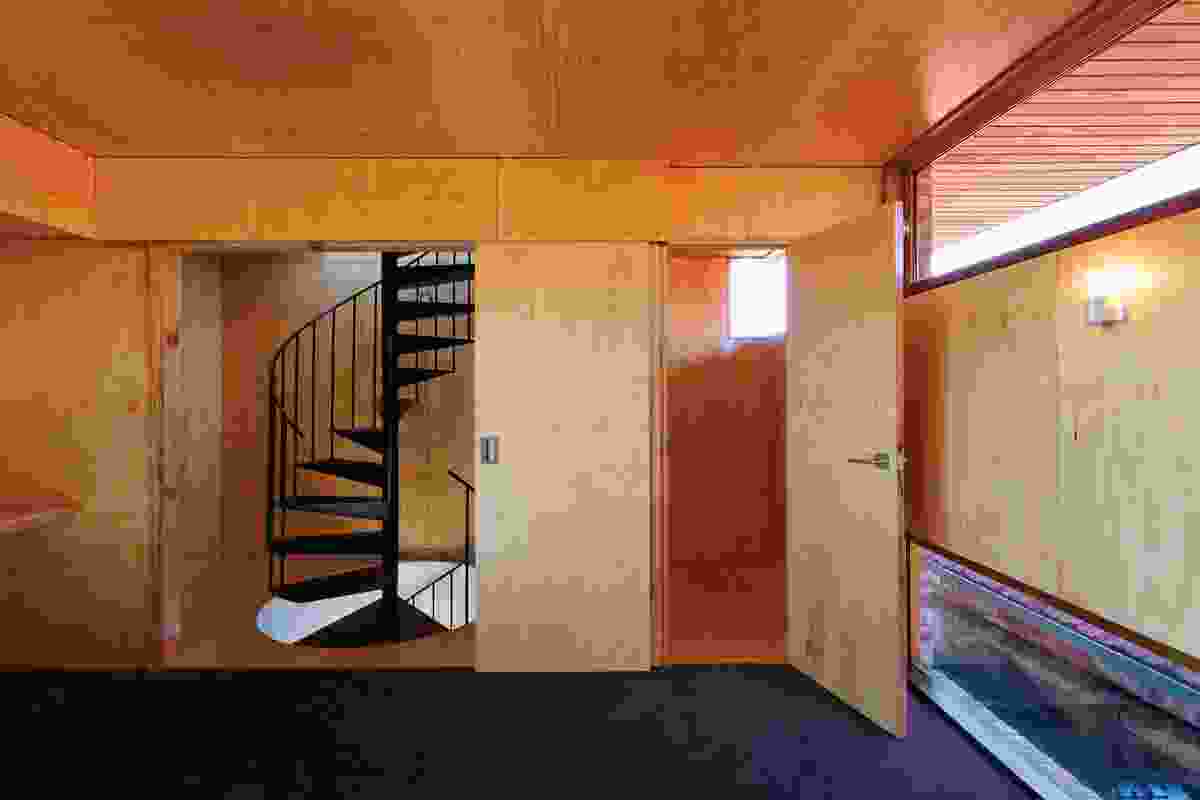 All new internal linings are low-VOC plywood, an illustration of sustainable reuse. 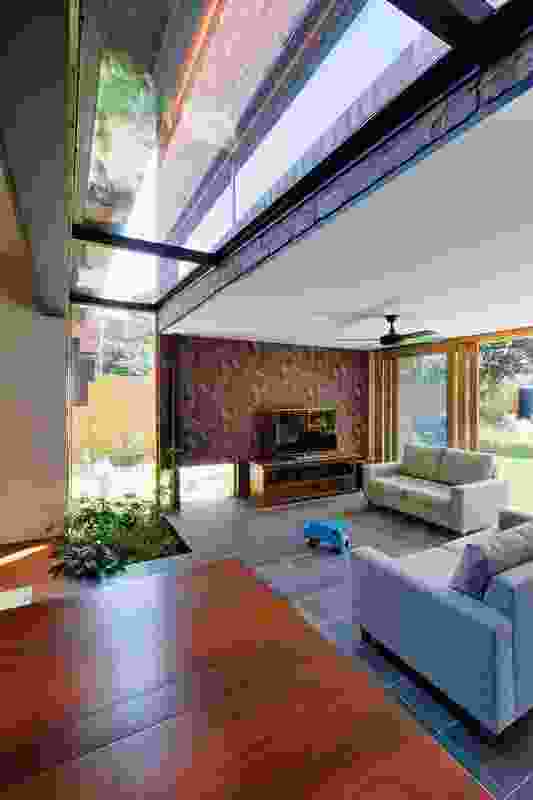 A part of the garden is introduced into a slot in the floor at the point of connection between the old and new.