In your face place

Andrew Leach looks at the extreme form of the Gold Coast as an architectural challenge that cannot be ignored.

Robin Boyd captures an enduring image of the Gold Coast in the portrayal he offers in The Australian Ugliness (1960) of its most urbanized moment. Surfers Paradise is the Gold Coast’s centre-by-proxy, its most concentrated, visible coastal node, in which Boyd found an extreme case of “featurism,” where “building disappears beneath the combined burden of a thousand ornamental alphabets, coloured drawings and cut-outs.”

In the idiosyncrasies of featurism’s most extreme examples he found symptoms of much more widespread tendencies in Australian architecture and society. The deliberate embrace of featurism that began, he wrote, “in the fashionable centres of Sydney, Surfers and St Kilda Road, now oozes out evenly, flatly, to the farthest places where Australians live.”

Boyd’s humorous and penetrating account of this “fibro-cement paradise under a rainbow of plastic paint” is nothing if not evocative. Australia’s ugliness may be skin deep, as he observes at the book’s outset, but Surfers is all skin. After a still-resonant description of the lights and sand, improbable fashion and “chocolate brown” limbs, he observes: “You might call Surfers a sort of cream, or thick skin, skimmed off the top of Australia’s mid-century boom. It is rowdy, good-natured, flamboyant, crime-free, healthy, and frankly and happily Austerican.”

Much has changed in Surfers Paradise in the intervening half century, and on the Gold Coast generally. Still, Boyd’s descriptions remain firmly wed to a popular characterization that “the GC” even now openly cultivates for itself. Confronting possibilities rather than consequences, Boyd is rather more generous with his subject than was Neville Gruzman a generation later. Speaking in 1984, on the eve of the RAIA’s first Gold Coast regional awards, Gruzman doubtlessly spoke for many in the architecture profession when he targeted the consequences of a sustained period of largely unguided development along the sea edge, commenting that “it is a disaster which should be bull-dozed into the surf.”

An agglomeration of beachside and hinterland settlements, the Gold Coast was proclaimed a city in 1959. In that year Architecture in Australia dedicated a special issue to the new city in which two landmark modernist buildings of its thriving tourism industry had recently been realized: Karl Langer’s “luxury” Lennon’s Hotel in Broadbeach, which in 1987 would experience the sting of obsolescence at the hands of the Coast’s thriving retail culture, and the ten-storey Kinkabool, built in 1959 in Surfers Paradise (on the site of the Flamingo nightclub) to the design of the freshly reorganized practice of Lund, Hutton and Newell as the new city’s first high-rise hotel.

In many respects, these coming-of-age moments shaped the reception of Gold Coast architecture as it was inaugurated in that year and codified by Boyd’s criticism: a beachside tourism city, unparalleled as it was, distinguished for its insistent proliferation of kitsch and trash culture, its ambivalence to the idea of “good architecture”; a place in which to play and play up; a centreless, formless city in which, for better or for worse, anyone could build and anything could get built.

Over the last two decades, however, and in no mean way responding to Gruzman’s criticisms, something has shifted decisively in the Gold Coast’s relationship with its image: it is not exactly overshadowing the values to which Boyd gave expression in The Australian Ugliness, but rather turning them over from criticism to nostalgia and reframing a distinct lack of planning as layers of planning. The city has entered a moment, one that is not so much about reflection as stumbling preoccupation, wherein it has become concerned with the relationship of its present self to its former self.

One might still go out of one’s way to cringe at the celebration of excess embodied in the Palazzo Versace, and one might still feel reassuringly uncomfortable while poking fun at the copy-pasterism of the French Quarter at Emerald Lakes and its replica of Michelangelo’s David, or its tribute to the Spanish Steps, updated for matters of health and safety. I admit to being fond of the blue neon gills picked out after dark along the edge of the Southport Sharks’ club building. I live in a gated community in a nondescript suburb off a cul-de-sac named after a famous American singer-songwriter, narrowly escaping the “golfer” streets – and I’m okay with that.

How much of this is a smugly ironic tolerance of trash culture, and how much the bourgeois pining for distinction at all costs? There are likely elements of both, but the Gold Coast nonetheless presents, in all its idiosyncrasy, a set of problems for architecture’s status in the city that have broader ramifications for Australian architectural culture. Ultimately, I relegate the kitsch and sprawl to background noise disguising something far more problematic than the Coast’s comfortable insistence (and why not?) on bad taste as an operative value.

In short, the Gold Coast poses the same core problem for Australian architecture now that it did for Boyd at the end of the 1950s; it demonstrates general tendencies taken to an extreme. For Boyd, first reporting on the Gold Coast from his 1957 summer vacation, it was the sign’s displacement of the building and all that represented. Today, it is the neutrality of architectural work in a city in which architectural ideas are of no consequence to its operation and expansion.

Because of the expression it gives this problem, at the level of state discourse on architecture the Gold Coast is the fly in the sunscreen. It barely rated attention in the Gallery of Modern Art’s exhibition Place Makers (2008), in which Ian Moore’s Air apartments at Broadbeach conducted an awkward conversation with a sea of timbered pavilions, and the lengthy entry on Queensland in the recently published Encyclopedia of Australian Architecture (Philip Goad and Julie Willis) neatly circumnavigates Australia’s second most populous municipality altogether.

To work up an observation made by Michael Rayner to the Gold Coast City Council ahead of the regional Australian Institute of Architects awards (announced on 20 April 2012), the Cartesian values of contextualism and experience that have long served to define the best works of Queensland architecture – epitomized in the troubling yet locally celebrated tectonic and phenomenological relationship between house and site, body and view – simply fails to account for much of the work undertaken by architects on the Gold Coast. One finds reassuring instances of it in the hinterland and away from the towers and suburban sprawl, but in these here parts it is decidedly anomalous.

The effect of this basic disjunction is that the Gold Coast is difficult to value in relation to the prevailing measures of the state’s architectural culture, and that appealing to those measures locally, especially under the guise of urban design, has served to undermine the very position of architecture in the city.

With two new schools of architecture setting up shop in the city in the last three years, we can reasonably expect to see a certain amount of effort to understand what has happened here on its own terms. We crack open Venturi’s Learning from Las Vegas and Banham’s Los Angeles: The Architecture of Four Ecologies in search of tools to help us out, but these are of as little use for reading the Gold Coast now as they are for understanding either of those books’ two city-subjects four decades down the track.

Why is it important to figure out the critical tools needed to understand the Gold Coast, except when, as you might say, you find yourself soaking in it? My main reason is, I think, a good one: because it is important to understand, as Boyd did, the difference between idiosyncrasy and symptom. And then there is the problem of dealing with a large body of new work.

The Gold Coast is caught between a lull in residential building and a boom in infrastructure investment. The controversial Gold Coast light rail network is being laid out now for service from 2014 on the back of Hassell’s urban design study, the new 750-bed Gold Coast University Hospital will be opened at the end of this year, and the successful bid for the 2018 Commonwealth Games has sparked plans for new construction and expanded capacity at a range of sports venues, including Populous’s recently completed Metricon Stadium at Carrara (I call it “the cupcake”). As the dollar weakens against foreign currencies and the local tourism economy picks up, the cranes will inevitably start swinging with a little more gusto on residential tower projects from Southport to Broadbeach.

The problem this leaves us with is the unspoken matter of architecture on the Gold Coast, namely form. In a multi-nodal city with no real centre and an invisible business district, but a high density urban concentration in Surfers Paradise consisting entirely of residential stock, we can reasonably ask what the form of those towers does for the city.

In a masterful return to Italian debates of the 1960s, Pier Vittorio Aureli has recently reminded us of the political role architectural form could have in the city as an economic field. The monumental architecture of the Gold Coast presents the mechanics of the relationship he describes as if it were the example he had in mind. The Gold Coast’s architecture is frustratingly apolitical in the face of this bastion of neoliberal politics, failing to offer a critique of the city itself. But this needn’t be the case – and in this, there seems to be some room to move.

In your face place 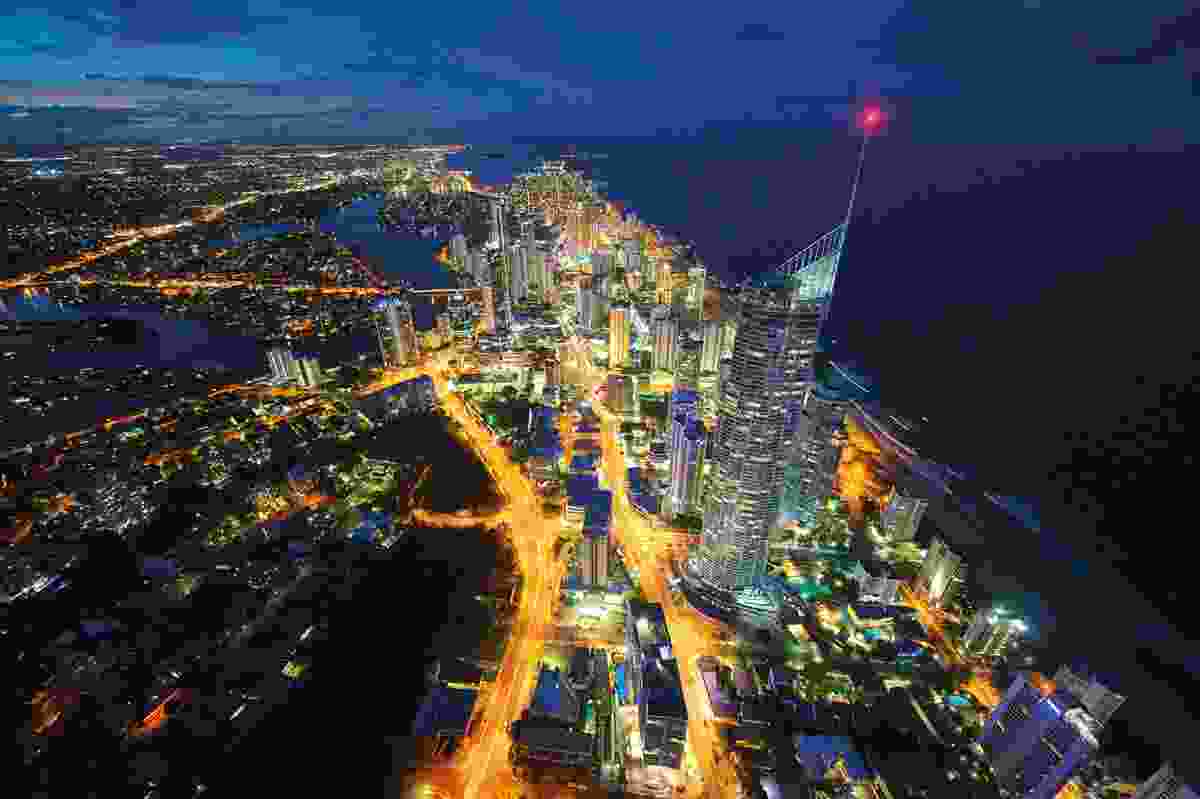 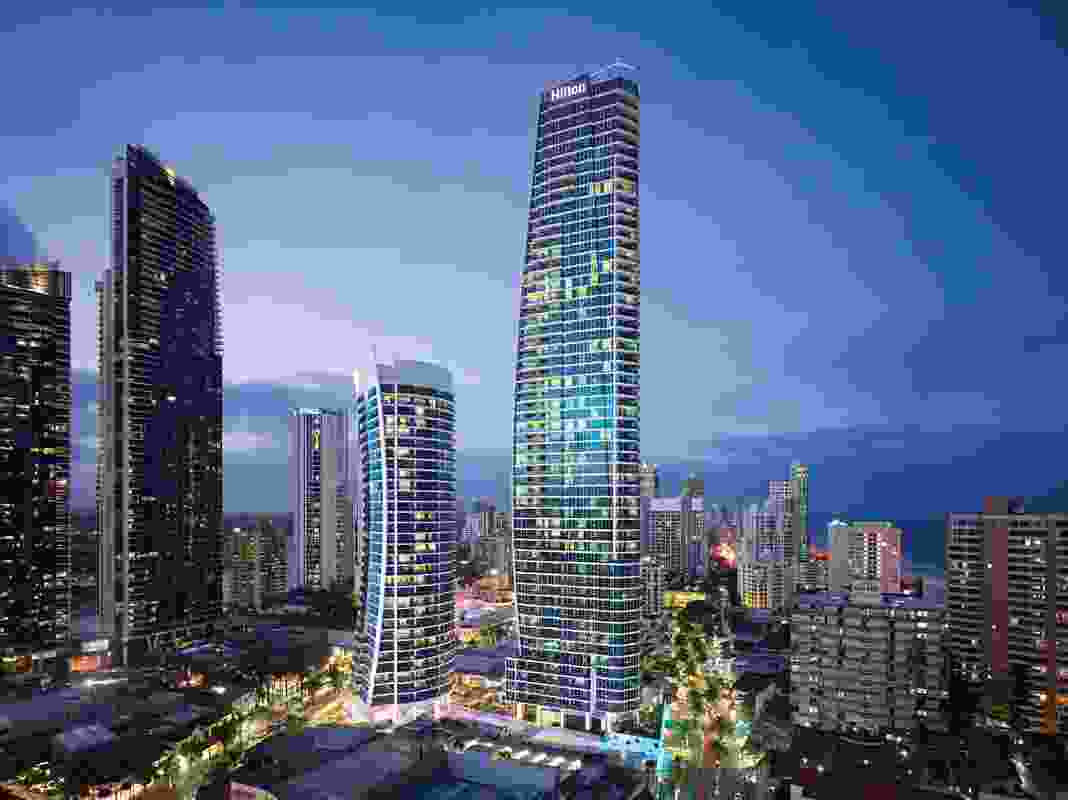 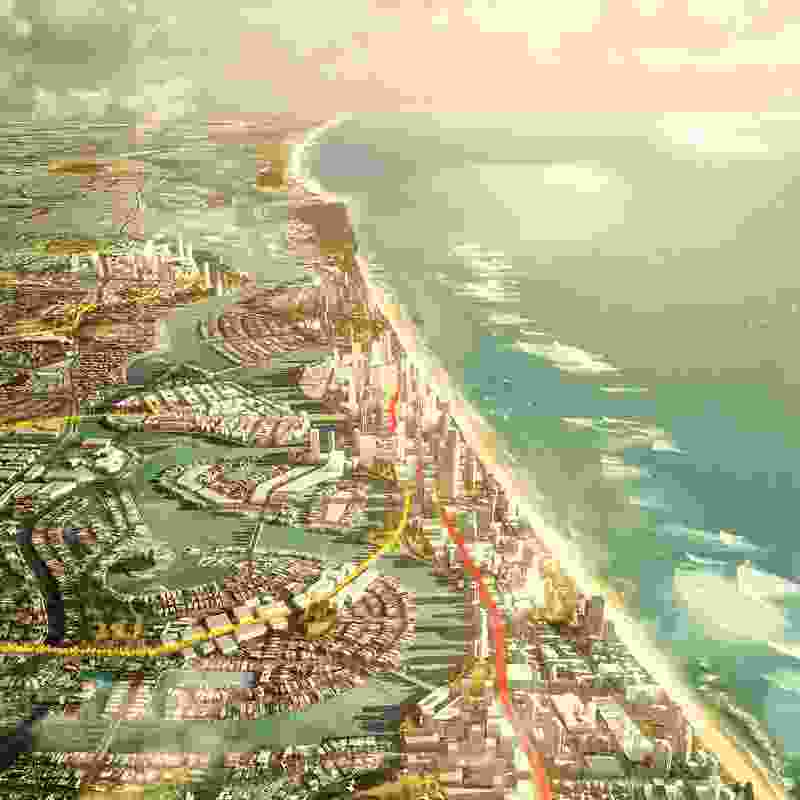 The Gold Coast Rapid Transit is an integrated transport strategy proposed for the multi-nodal city, including a light rail to extend from Southport to Broadbeach.

The Gold Coast Rapid Transit is an integrated transport strategy proposed for the multi-nodal city, including a light rail to extend from Southport to Broadbeach.

Completed in 2011 by Populous, Metricon Stadium has been designed in a horseshoe shape to allow for the installation of a temporary end stand to increase its capacity. 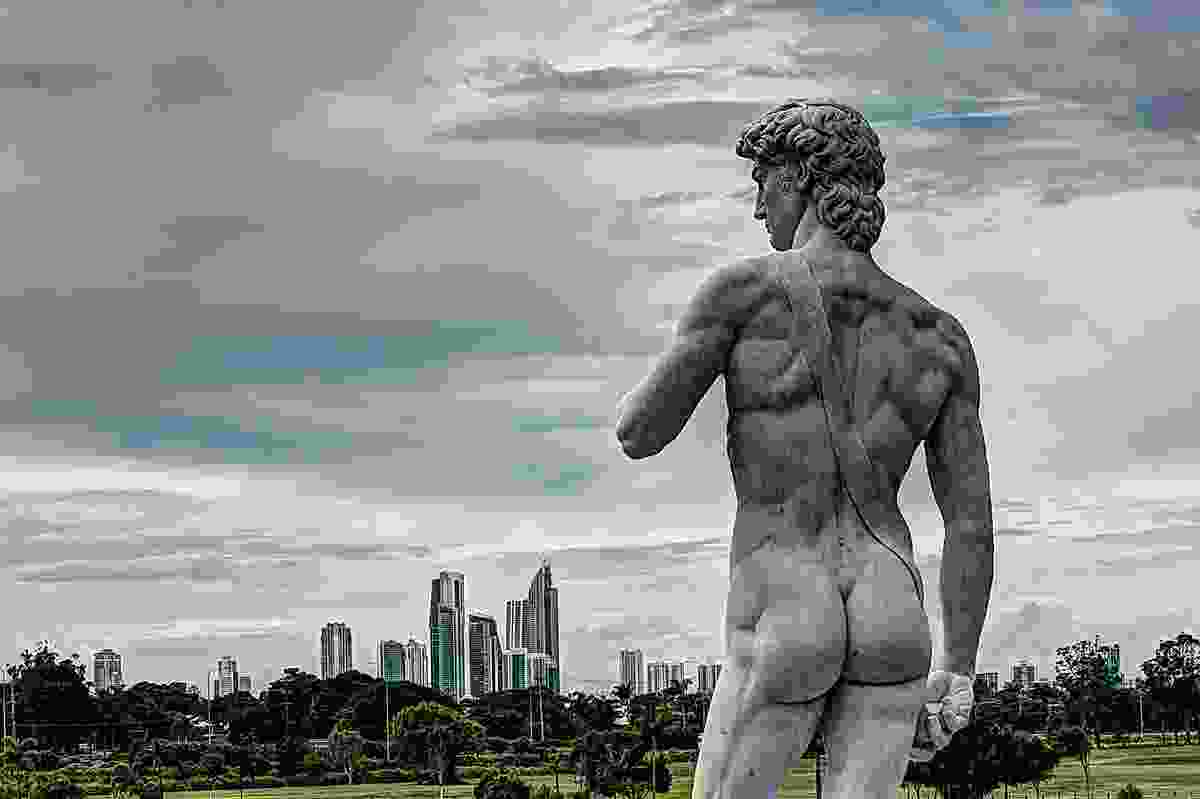 A replica of Michelangelo’s David keeps watch over the Gold Coast from The French Quarter of Emerald Lakes.