Composed as a series of concrete and masonry platforms, this rigorously executed home by Owen Architecture with Lineburg Wang maintains the pleasure of low -density living through a considered exploration of architecture and terrain.

Set above a solid front wall, the upper level of the house steps away from the boundaries of its narrow site.

Beyond the compact footprint of the CBD, Brisbane is a city of sprawling suburban enclaves, carved out by the serpentine course of the Brisbane River. Twenty-first-century densification challenges the twentieth-century suburban pattern of pavilions in the landscape, making it difficult to uphold low-density ideals in the context of diminishing green space and expanding building footprints. Indooroopilly House, designed by Paul Owen of Owen Architecture and Michael Lineburg of Lineburg Wang, tackles the rigorous demands of building new on a steep and narrow site, committing equally to the experience of architecture at the scale of the city and the person.

Despite the favourable qualities of elevation and view, the conceptual beginnings of Indooroopilly House were mostly directed by the constraints of its ten-metre-wide site. “If we were working on the original block that was twenty metres wide, we would start by making garden or courtyard spaces and design a single-level house wrapping around open space,” Paul explains. “But on a small lot, this diagram doesn’t work.” Determined still to forge a landscape proposition, Paul and Michael sought alternative ways to reconfigure the relationship of architecture and terrain.

The long section reveals the legibility of their poignant idea: a series of concrete platforms moving in step with the rise and fall of the earth, front and back sections offset by a half level and connected by a dogleg staircase. “We knew we had to make a compact house,” Michael says. “By putting the staircase in the centre, we knew we could reduce the footprint, ensuring that there are effectively no corridors.” The plan is equally determinant. Widest at the centre, it “pinches” at front and back corners, giving length to opposing north-eastern and south-western edges, guiding view corridors and channelling sunlight and breeze inside.

Careful management of the terrain results in a house presenting on the street as a lightweight garden folly set upon a solid garden wall. The thinness of the projecting elevation minimizes the visual impact of the whole and maximizes the apparent distance between it and neighbouring houses. The composition of off-form concrete and white rendered masonry subverts the presence of the garage door and reinforces the weightiness of the hillside, suggesting that as the ivy takes over, the rusticated base will become part of the natural conglomeration of the garden.

Deliberate moves to “step” in section and “pinch” in plan strengthen the landscape intentions of the architecture. Rooftop and boundary gardens are deployed to soften views out and reinforce the presence of nature from within. As effectively as the building creates and establishes platforms for landscape, it also bends and flexes in order to frame it. In the northern half, a weather- board skin wraps the street terrace, editing views toward the tangle of vestigial landscape across the street, framing lush green against blue sky while drawing the northeasterly breeze into the lounge room and children’s bedrooms.

Entry to the house proper is via a side pathway, coinciding with the outdoor terrace at the southern end of the site. Here the splayed wall of the pinching plan opens out, guiding views toward the lengthy Chelmer Reach of the Brisbane River. Terrace, kitchen and sitting room feel embedded in the earth. The smooth, grey surfaces of off-form concrete and marble, constituting floors, ceilings, walls and benchtops, appear monolithic as if carved from a quarried hillside. By contrast, the golden tones of American oak and brass are heightened against silvery greys. The chromatic experience is something quite unlike that of a room with white walls. These spaces are compelling, cavernous and calm.

The terracing of the plan tracks the falling terrain, striking a datum that registers the sunken sitting room. Here, contained by glass walls, a U-shaped bench fashions a space for intimate conversation that appears to be perched on the edge of a precipice. The folding of the concrete slab at this juncture is mirrored in the floor above, where private chambers dedicated to dressing, bathing and sleeping are also positioned to engage with the duality of prospect and refuge.

The generous proportions of robe, ensuite and bedroom reflect the importance placed on the ceremony of everyday tasks. In the ensuite, the expense and precision required to realize a concrete floor pay off as its tiled marble surface slides seamlessly into a sunken bathtub. As light spills down from the skylight above and the view extends over the bedroom toward distant treetops and the Brisbane River, the purest elements of nature and architecture converge.

Although intensely site-specific, Indooroopilly House supports the broad notion that the resolution of building and landscape precedes architectural proficiency. Negotiating topographical and climatic sensitivities, this project casts a wide web, considering impact in macro and micro contexts. It demonstrates that when physical and phenomenological worlds become part of the experience of architecture, the everyday is elevated to something extraordinary.

Other
Custom American oak, brass and Carrara marble wardrobe and dresser with Rowsaan Cloud handles; furniture from Cult; bed linen from Sheets on the Line. 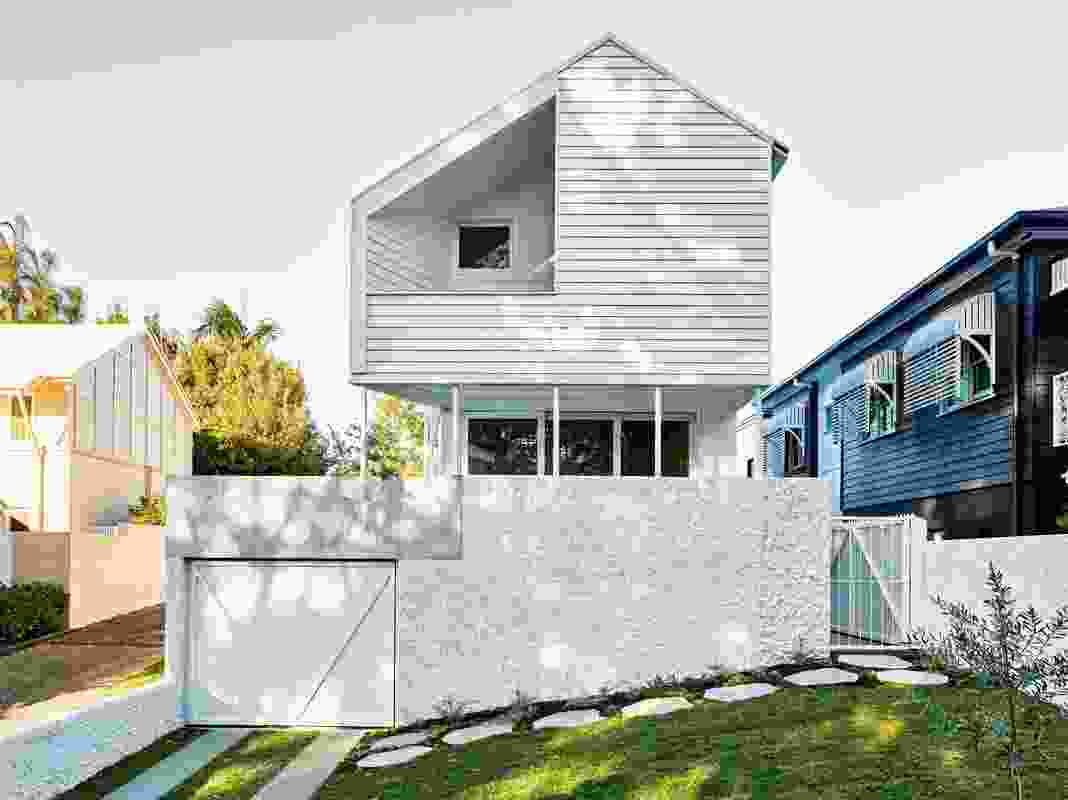 Set above a solid front wall, the upper level of the house steps away from the boundaries of its narrow site. 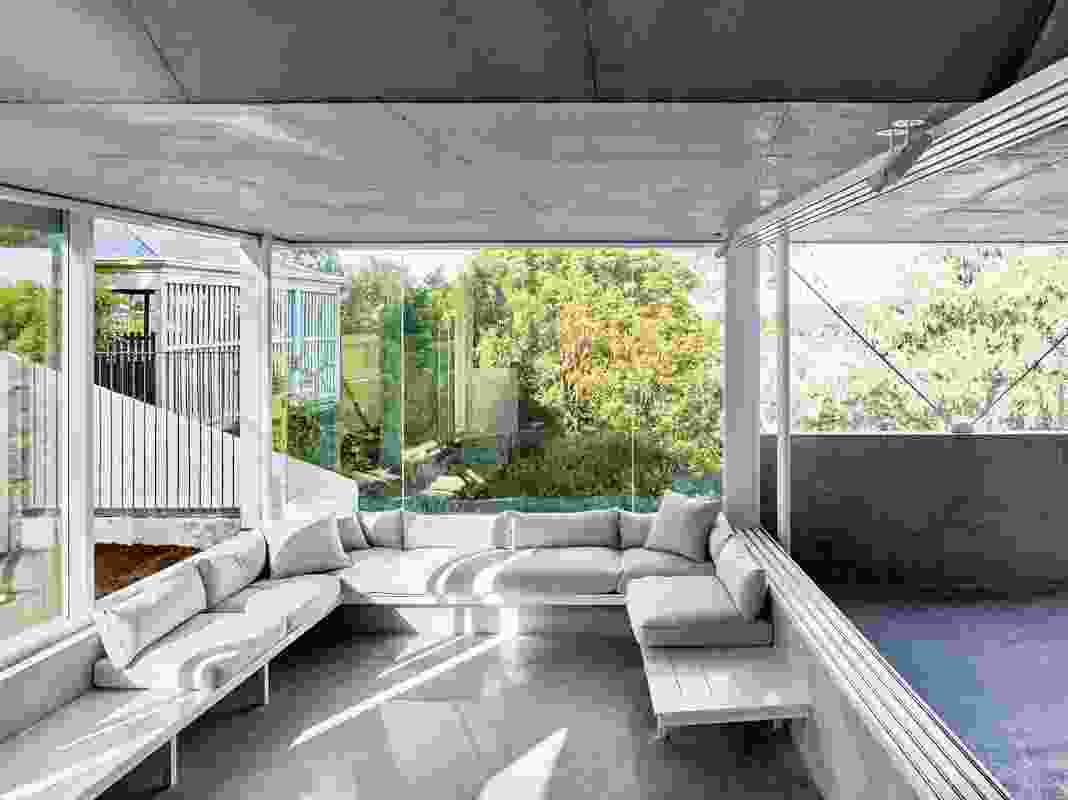 Muted tones of concrete and marble give the illusion of an interior carved from a single material. 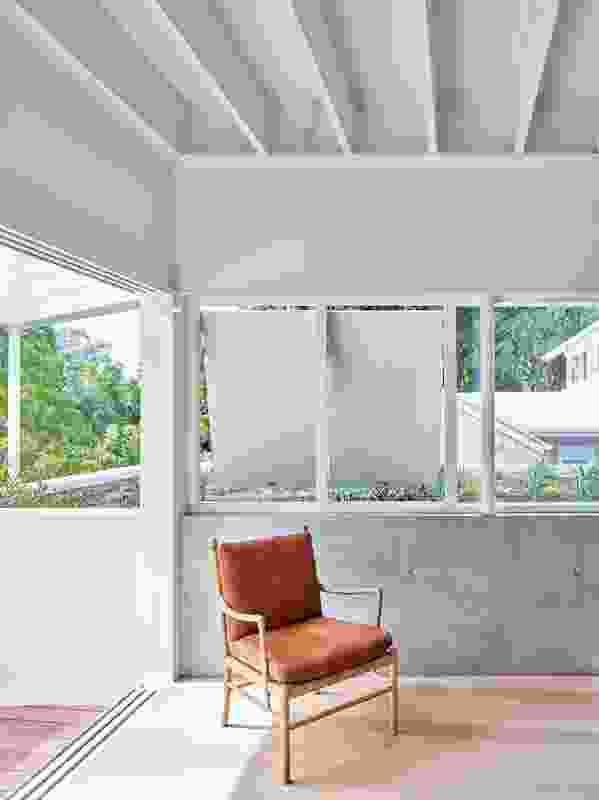 Prospect and refuge are balanced by a flexible envelope that allows vestigial landscapes to filter into the house. 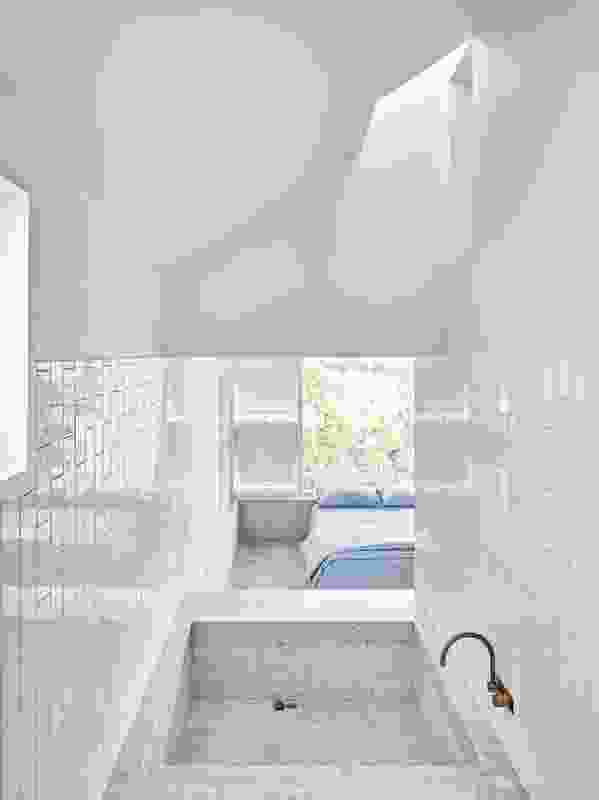 A sunken marble-lined bathtub looks across the main bedroom to verdant treetop vistas. 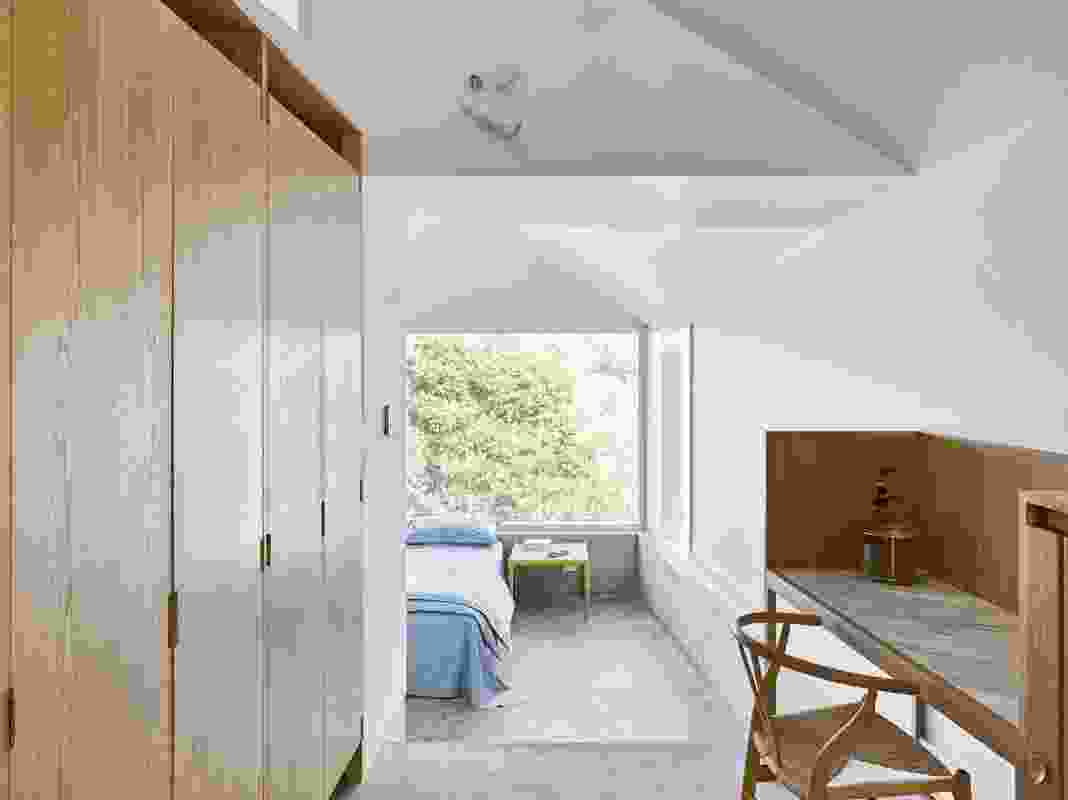