Architect and filmmaker Toby Reed is as well versed in filmmaking, music and art as he is in architecture. Here, Reed reflects on his practice at the blurry boundaries between the disciplines.

Nigel Bertram: How do you start a work?

Toby Reed: Usually, the ones that work best are those I do the fastest. The Arrow project, for instance: I knew for a couple of days that we had this project in a backyard in the countryside, and it was a little art gallery. I thought it was a great opportunity to do a riff on the white cube – the classic tabula rasa and the [modernist notion of the gallery as a] white cube … getting right back to the basics of what architecture is. So I immediately knew what I wanted to deal with, but I didn’t know what the form would be. I was interested in distilling architecture into its most essential elements. The client was coming in the next day so I had to come up with something quickly. I knew that he didn’t want any windows because he was very concerned about security, and I just intuitively came up with the arrow shape. I thought this could solve his problems and he could still see out, with small views; it became an idea about the white cube as a bent object –bend the white cube and suddenly it turns into an arrow.

NB: Do you think of this as architecture, art or both?

TR: I don’t really draw boundaries. If you try to find the first cube in architecture, you can just keep going back and back – there is always something before. It is the same with the boundaries of a discipline: you keep trying to find it, but as soon as you get there it goes further! So what we’re talking about is the image of a discipline with a boundary, the appearance of that boundary with another discipline near it, [the initial sense that both disciplines seem to intersect, only to find that] those borders actually disappear as soon as you get to them.

NB: But it’s not actually an intersection, is it? There’s a blurring …

TR: Yes – they’re just floating and overlapping, not intersecting. I think it’s really hard to actually draw that line [between disciplines]. I came at the Arrow project from a very architectural point of view, thinking of the white cube and the essential nature of shelter.

NB: So why is it so hard for architects to work in an art context?

TR: Each discipline, no matter how blurred, seems to operate within a historical trajectory of the medium and so it becomes hard to shift quickly and meaningfully from one to the other. Ai Weiwei knows how to do this. It is like we were saying, you might understand the other discipline – and even work within it – but you are still located within your own (blurred) realm.

NB: So if an artist came up with a giant arrow-like object, which is completely plausible, it could be quite a different thing from your building.

TR: Yes. It’s like Duchamp’s readymades. A urinal in a bathroom is a urinal, but stick it on a pedestal in a gallery and it’s art, or put it somewhere else and it’s junk. It’s all about context, the way we read things. For example, Arrow was working within the context of providing a functional room, of being used and liveable.

I did a kind of Frank Stella thing on the two end walls, the radiating crisscross slats. I had them both the same and the client said, “I really like that, but could we do it like the Renault logo on the other end?” He already saw it that way, as logos. I think Stella would do it that way anyway, because he does two squares radiating inwards, radiating outwards.

NB: So you are thinking about artists and referring to their work?

TR: It’s an art reference, but Stella would do an architecture reference just as easily. And the client was seeing it in terms of car logos! I do think you can read things in lots of ways, and that’s what I like about architecture. I’m interested in the Rorschach tests, for example, and the relationship they could have to designing and interpreting buildings. The Rorschach ink blot is abstract, but it’s all about how you read it. So even if we all want to deal with abstraction – and I love abstraction – it’s still not abstract, even when you try to be.

I approached the Dandenong Precinct Energy Project as a type of “free association,” rather than shoving the message down people’s throats. It was also designed very quickly – I had three days to design it. The project is a cogeneration plant for a whole precinct, and the building needed to advertise, or make people aware of, this green energy in a certain way.

The form is like an image, an abstract form, and then there are supergraphics and readymades just thrown at it.

NB: Is this a constant theme in your work, this interplay between form, image and sign?

TR: Yes. In Arrow, for example, I was thinking of it as a kind of zero degree image – unifying structure, form, function, space and image in one thing. It’s minimalism, really, whereas Dandenong was much more freeform. Dandenong was partly political – I thought the plaza just needed something that communicated more, it didn’t really need solemnity or any­thing. The requirements were a bit more civic.

NB: It is clear that your influences are a combination of different things. There is a long history of art influencing architecture, and the other way around.

TR: Yes. At Dandenong, I might have been subconsciously thinking about Robert Rauschenberg or Joseph Beuys, [whose work includes] abstraction as well as objects. It’s not their work specifically that I was influenced by, but an attitude.

NB: Returning to the perpetuating influence of one discipline on the other: maybe this is something to do with fields that appear to intersect, that come quite close to each other? They become very open to appropriation.

TR: And sampling … Adolf Loos referenced the readymade in his Chicago Tribune Tower competition entry (1922). There is very much an architectural history of the readymade,
as well as an art history. I was really into Duchamp, in particular, before I studied architecture. At school I was interested in Duchamp, Warhol and Beuys, as well as Fluxus.

NB: That’s interesting, you started architecture school with a very informed position on modern art. Obviously that has been quite important for you. You never thought of producing works in an art context yourself?

TR: Do you remember the 1986 Artists and Architects exhibition at the Ewing and George Paton Gallery? I never thought that sort of stuff worked very well. I thought it was really hard to make this art and architecture thing work, in a gallery, in that way.

NB: Do you think the framing or the limits of a discipline are useful?

TR: I think the framing and limits of disciplines are interesting as a kind of mirage – they’re not real, and they’re not actually there. They’re like images. 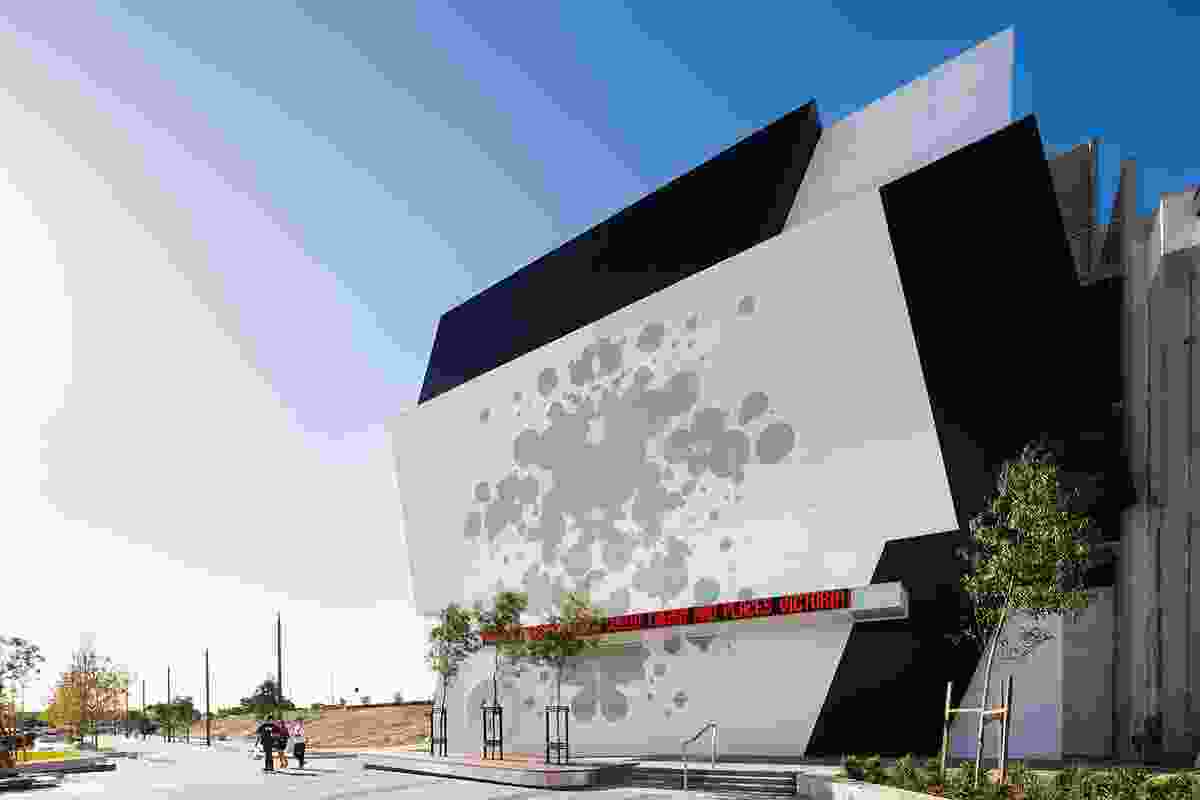 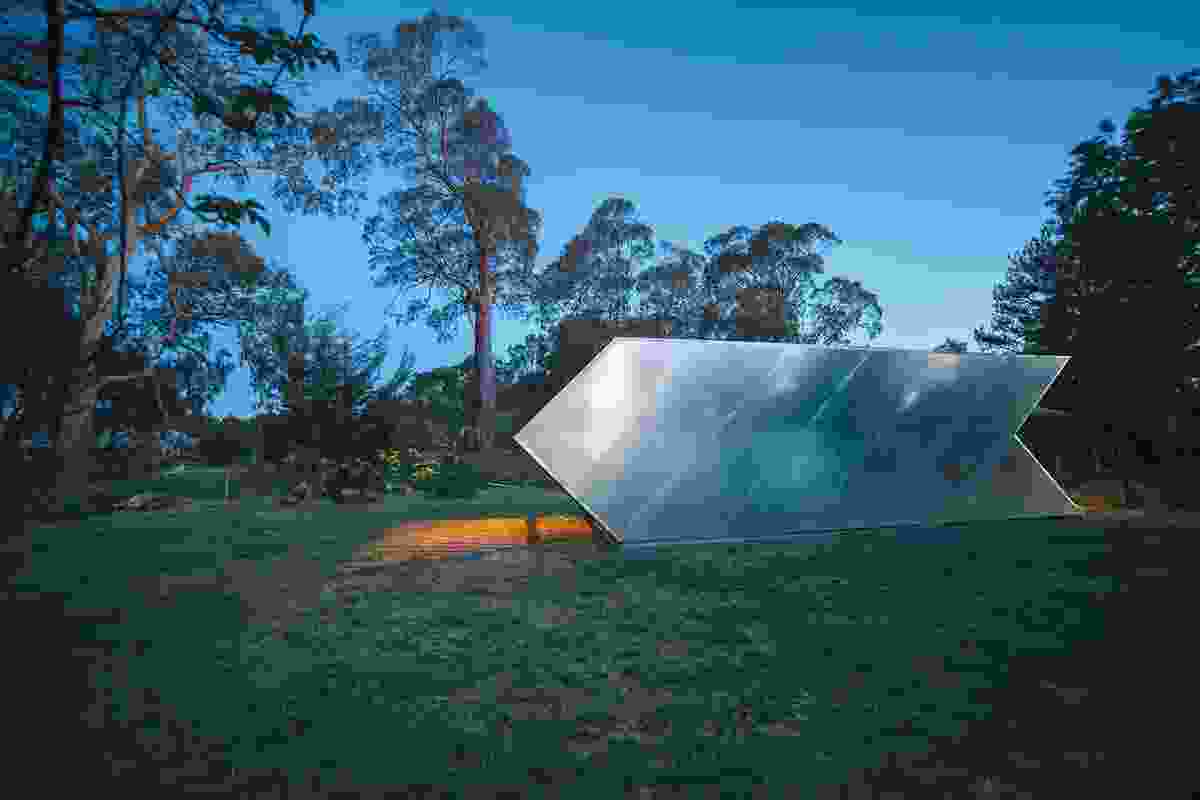 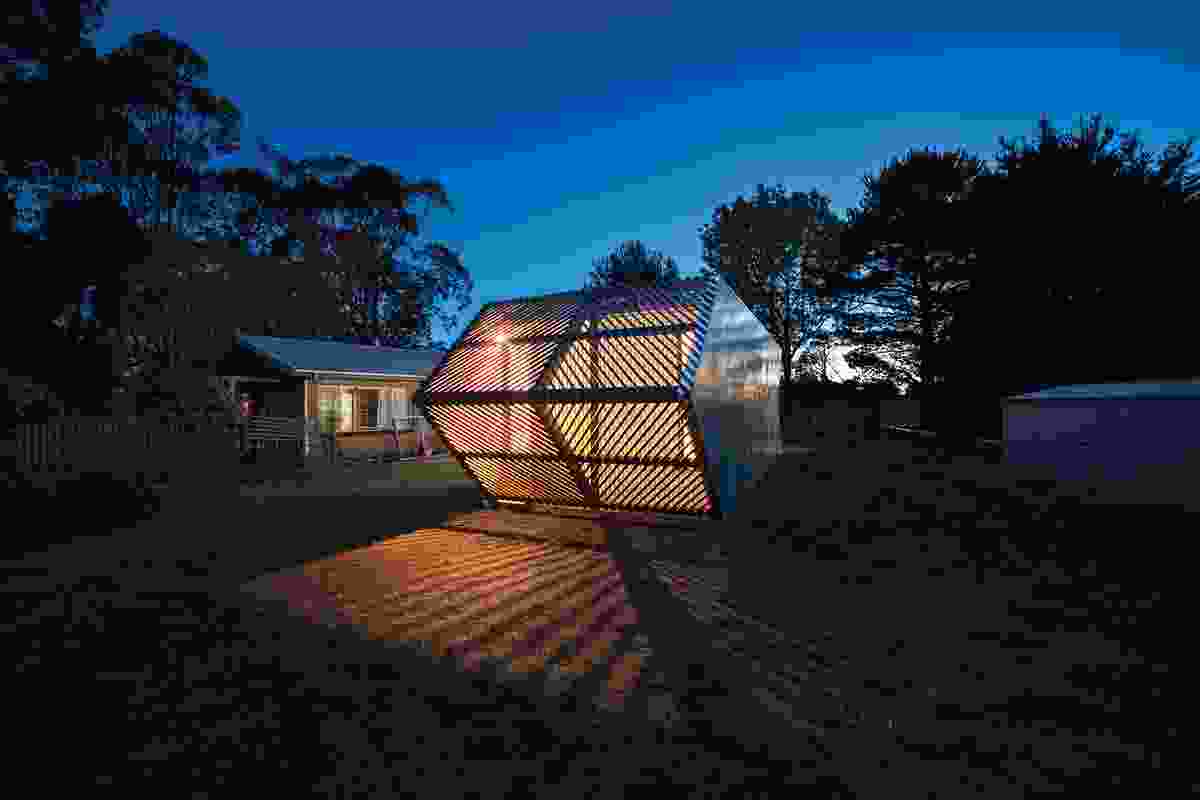 Crisscross slats at either end of Arrow reference the work of artist Frank Stella.