Carey Lyon: “Everything is a public building”

Emma Williamson and Kieran Wong (CODA Studio) talk with Carey Lyon, a keynote at the 2013 National Architecture Conference, about materials, decoration in an age of austerity, and why “metaphor” is not a dirty word.

Reflection of the city: Swanston Academic Building by Lyons.

CODA: I’d like to start with a couple of things you mentioned today at the conference – the idea of “brain-craft,” which I found quite compelling, and the idea of what is or is not an “authentic material” in architecture. A number of speakers talked about material honesty, which you described as dangerous terrain …

Carey Lyon: We get pretty frustrated that sometimes our work is somehow regarded as dishonest. There is a “truth to materials” paradigm, which is nothing more than modernist ideology. You know – that an honest approach to materials makes an honest architect and then somehow that makes an ethical architect. So if you’re interested in the decorative or you have a mind that’s open to the artifice of architecture, in the current climate it’s an anathema. We accept there is not an inexhaustible capacity for resources, and we have to manage that carefully, but the idea that that means we’ve got to be scarce in our thinking is nuts …

CODA: Your presentation made me think about the role that all architects play in the supply chain and the potential to connect with local industry. I wondered whether your practice might have a role in the local economy through your material choices.

CL: It would be fantastic if that were the case, but generally if contracting is done through a head contractor, subcontractor choices are ultimately their responsibility. Perhaps if you’re in a partnership contracting arrangement, or an alliance, or even a novated design and construct, there is the potential to make a difference. It’s a pretty big issue. Could the architectural profession drive change in the Australian manufacturing base through major projects? It’s pretty unlikely, to be honest.

CODA: It’s perhaps a discussion about influence as opposed to pure effect, isn’t it? There’s an ability to influence thinking about the role of production and manufacturing.

CL: I think industry is slowly waking up to the idea of the generic and the customized as opposed to mass production. It’s a powerful concept that will continue to grow in importance and it should be interesting intellectual territory over the next couple of decades.

CODA: Surely that must have been the case with the wall cladding system at Swanston Street? Although the triangular panels are all the same size, you have multiple colours and combinations, and the way they’re installed in terms of the geometry of the plan must change it each time.

CODA: So at what point in the project’s development is the idea of the material conceived? It almost felt like at any point along that journey another idea, which relates to it and supports it, might pop in through a process of looping and iteration. There never seems to be a point at which you freeze. So …

CL: Well, probably to meet a deadline, but …

CODA: There is that, of course …

CL: The design process that we try to practise in the office embraces the fact that the world’s complicated and every project is complicated in an interesting way. You have an idea, and another idea, and you put them together. You might have half a dozen ideas that are trying to coexist on a project, and the friction that they give off against each other is what’s exciting in the process.

At RMIT, early on we wanted to do a curtain wall project because we liked the play between a university building and the corporate city. That was just an idea that got thrown in. The anodized colours work as a material opportunity and illustrate some of the ideas we had about the mapping photographs of the city.

Material is one idea. At RMIT, early on we wanted to do a curtain wall project because we liked the play between a university building and the corporate city. That was just an idea that got thrown in. The anodized colours work as a material opportunity and illustrate some of the ideas we had about the mapping photographs of the city.

CODA: Is there ever a point where there are enough ideas? Or do you think if the project didn’t have a deadline, you could just keep layering, becoming more intricate in the way the ideas are expressed?

CL: Deadlines are great because they force you to cut off, but yes, there’s always a balance. There can be too many ideas, so you try to find the ones that work well together on a project. It’s unlikely that we would do a project where the first idea is about a material. Of course lots of architects do, which is fantastic and interesting, but we wouldn’t think like that.

CODA: Material choice is to support the architectural idea?

CL: Yes. We press the material into the service of the idea. Architecture is much bigger than just its materiality.

CODA: But quite soon those ideas must have to materialize. So if you’re talking about, say, corporate architecture in the CBD it leads to the development of the curtain wall and then to anodizing and aluminium manufacture. It’s hard to break the relationship between the material and the character of the material and the idea. So can the idea be formalized first and alluded to without its materiality?

CL: Our view is that everything in architecture carries some cultural baggage; everything has associations with its previous use. So we try to be pretty self-conscious about that. Research it, and understand it, and try to pick the point where you feel you know where you are in the wider discipline of architecture, in history, or amongst what’s happening in your city.

CODA: Do you think it’s easier to make these observations retrospectively?

Everything in architecture carries some cultural baggage … Material use is the same. For example, I don’t think you could use corrugated iron in Australia without automatically defaulting to a whole history of colonization. If you think you can use corrugated iron just for its intrinsic performative qualities, you’re kidding yourself.

CL: Yes, but the idea is to be self-conscious. We’re not the sort of practice that wants to close the shop doors and be in our own world. We are engaged with the city and the local culture and always try to think of our work in that way. Material use is the same. For example, I don’t think you could use corrugated iron in Australia without automatically defaulting to a whole history of colonization. If you think you can use corrugated iron as just a passive neutral material, for its intrinsic performative qualities, you’re kidding yourself.

CODA: Do you think that this cultural sensitivity allows Lyons a more finely tuned observation of other places, say when you work outside of Victoria, or Melbourne even …

CL: Absolutely. The project we did in Perth was like that. I mean, you can’t hope to act like a local immediately. We talked with the Noongar users of the building about their aspirations for parts of that project in terms of representation. We were interested in Perth as a city in the middle of the desert, and there’s a number of landscape ideas and ideas about the mining industry that have been built into that project. We were trying to make something non-generic. That’s what interests us – that the world is not generic – and we like the idea of building specifically in a culture.

So it would be interesting to see, if we built a building in China or somewhere else, what we would do. We would ask ourselves questions with the same attitude, and we would probably use the same process, but come up with a completely different form as a result.

Australia is off the axis and that’s a good thing. We might give a lesson to the world on the value of stubbornly building a local culture and not fretting over whether or not we’re central to the international scene.

CODA: When you talked about the project in Perth, there were various cues that you brought to the project – like the tortoise and its shell, and the ways the drafting students and hairdressing students come together. But those things were taken quite seriously; they’re not puns. Well, they’re sort of puns, but importantly they’re not piss-takes.

CL: It comes down to: what is a material? Is it purely a performative bit of inert matter, or is it alive with cultural associations and meaning? These are the extremes. We would argue that it couldn’t be one or the other; it’s got to do both. We see the design as trying to build that cultural association into the way we make the architecture and interact with the materials.

It’s not quite a dirty word, but metaphor for the last twenty years has not been that popular. We’re interested in metaphor, and we often talk about projects to force the architectural question outside of the architectural discipline.

It’s not a pun; I think metaphor is possibly a better term. It’s not quite a dirty word, but metaphor for the last twenty years has not been that popular. We’re interested in metaphor, and we often sit around and talk about projects to try to force the architectural question outside of the architectural discipline.

We’re very interested in the history of the architectural discipline, but we’re also interested in how you can step outside of that. And in trying to step outside you make wider connections, which maybe make the buildings more engaged with their communities.

CODA: And is that because you think there is the potential for the metaphor or the narrative of a building to speak to the people who occupy it?

CODA: Another aspect of your presentation that I wanted to follow up was the question you posed: “Is RMIT in the city, or is the city in RMIT?”

CL: One of our practice mantras is “everything is a public building,” even a house. We always try to eke out some small public generous gesture. Even if we were given the meanest possible brief, our first sensibility would always be to say, “Well, how can you turn this into a piece of public architecture?” because public architecture to us is just another way of saying that it must be connected into the grain of the city, or the suburb, or its specific location.

Carey Lyon: “Everything is a public building” 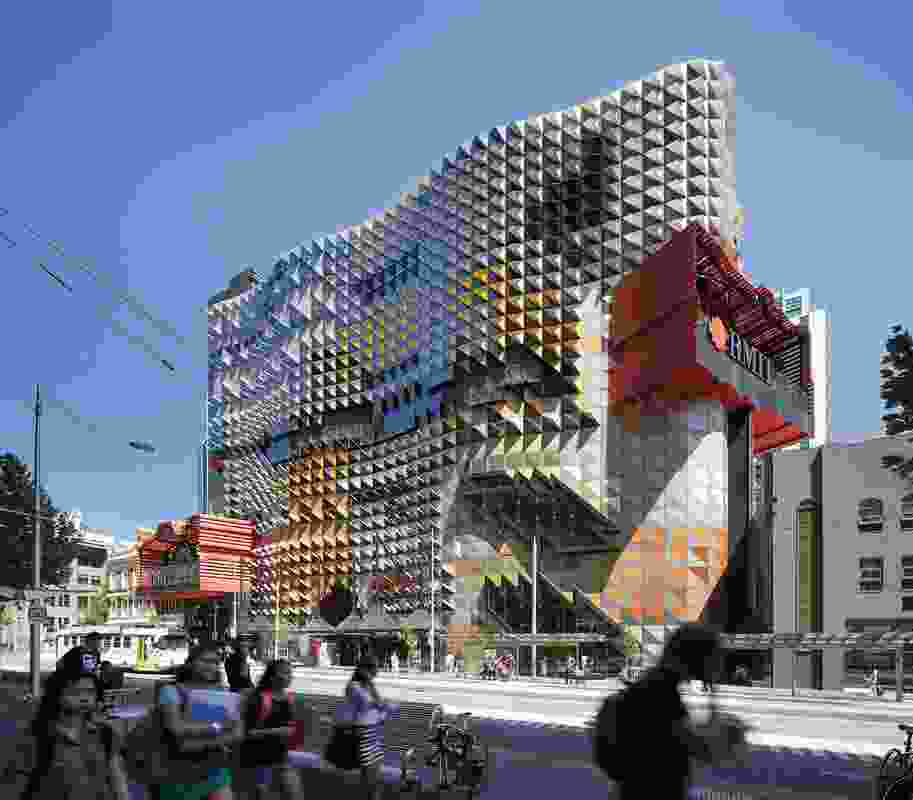 Reflection of the city: Swanston Academic Building by Lyons. 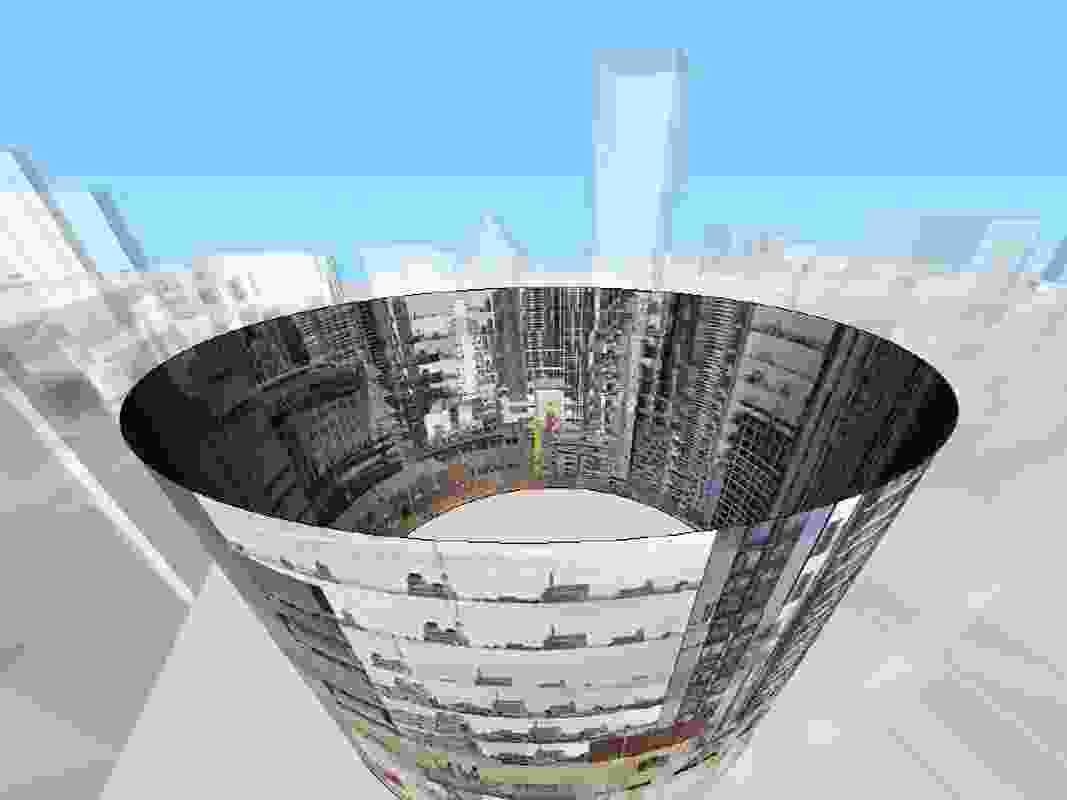 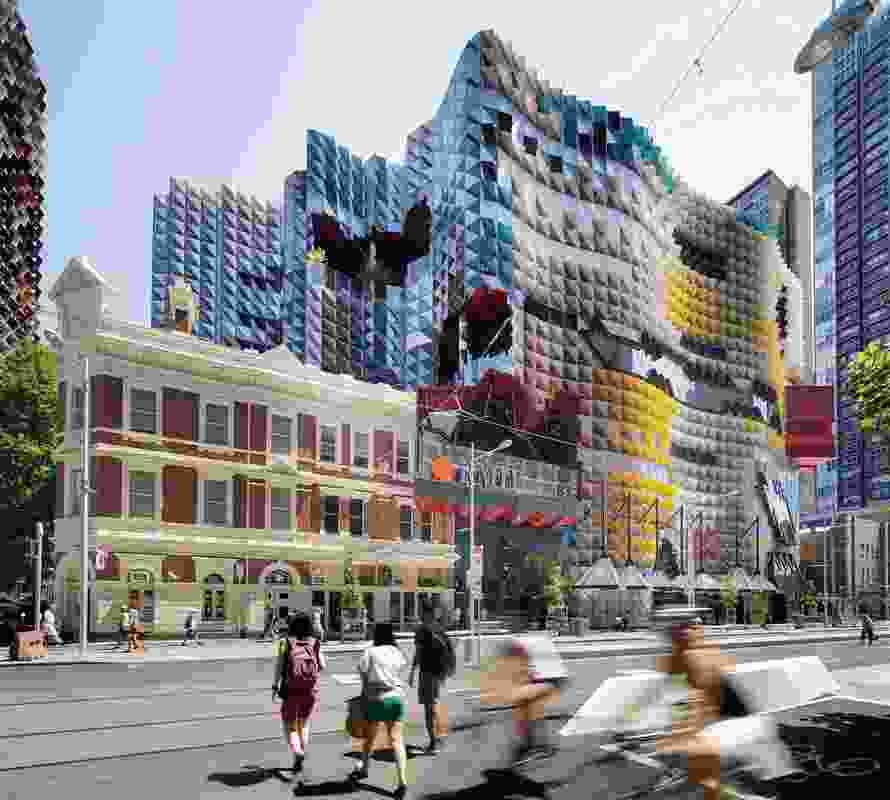 Swanston Academic Building by Lyons: interplay of a university building and the corporate city.