Designed to withstand cyclones and cater to its owners as they age, this thoughtful house by Chloe Naughton reflects the level of detail and craftsmanship that is characteristic of local traditions.

Timber-framed skillion roofs top the house, with the largest section draining rainwater into a box gutter to be collected in tanks.

Community is central to life in regional Australia, providing a network of support an d a training ground in which local knowledge, skills and traditions are passed from one generation to another. Embarking on her first built project directly after graduating from Queensland University of Technology, Chloe Naughton came to understand the value of this connection intimately, as she returned to Bowen in North Queensland to oversee the construction of a house that she designed for her parents, on the site of her childhood home.

Having lived through many cyclones, Kerry Naughton-Menzies and Barney Menzies wanted a concrete building that “wasn’t going anywhere” in a storm. Although not yet retired, they looked ahead to consider how their home might accommodate wheelchairs and live-in carers. The house was designed around a central communal space, with large sliding doors to the north and south that open to transform the living room into a shady breezeway. A strip of louvres in both the north and south walls allows for more carefully moderated cross-ventilation in windier weather. The main bedroom, study and indoor/outdoor bathroom form a suite to the east, along with the adjacent second bedroom that doubles as a south-facing painting studio. To the west another suite of spaces, which can also be entered directly from the garden, provide a degree of separation for a third bedroom, main bathroom, toilet and laundry.

Although modest in size, the project was ambitious in detail and Chloe realized that she would need assistance to refine and adjust the design to the modest budget. She recognized the incredible learning opportunity that would be offered by being on site, but when she first moved back to the small rural town from the city, she felt disconnected from the industry and bereft of resources and mentors. While waiting for construction to commence, she worked on miscellaneous drafting jobs, developing relationships with local builders, sub-contractors and a retired engineer, Clifford Stanyon, who became her chief mentor and friend.

Construction began in 2015 with J. D. Lowcock and Co, which worked with Chloe to explore ways of reworking the design to reduce the budget while maintaining as much detail as possible. They explored concrete block as a more economical alternative to in-situ or precast concrete. Chloe was subsequently inspired by buildings at James Cook University, designed by James Birrell in the 1960s and m3architecture fifty years later, which demonstrate an alternative to both in-situ concrete and the local tradition of rendered concrete block, and “celebrate the raw and robust material in a delightful way.”

Being on site during construction allowed Chloe to consider ways that even the most prosaic details could be adjusted to provide opportunities for delight. Subtle variations were created through the choice of smooth and honed concrete block and different bonds. Local brickie Tim Johnstone was brought out of retirement to polish the block-laying skills of the local builders, who were accustomed to rendering over less precise construction. The slab was laid in five pours, with the gap for the expansion joint increased to allow a recess for pebble inlays that create thresholds between various spaces of the house.

Timber-framed skillion roofs top the house, with the largest section draining rainwater into a box gutter to be collected in tank s. The smaller roofs at either end of the house have no gutters, celebrating the rain as it sheets down around the edges of the bedrooms and drains directly into the rock garden below.

Inside, the open-plan living room is delineated into three zones. A TV alcove locates the lounge and sitting area and a round table to the south defines a dining space. Along the western edge, a timber veneer wall forms the backdrop for an island bench with built-in sink and cooktop, which is framed by two suspended boxes: a slender rectangular light fitting and a larger box that houses the cooktop extraction unit. The remainder of the kitchen appliances are in the scullery behind. The circulation path across the living space accentuates the strong relationship between inside and outside, by aligning with a visual connection to an existing Poinciana tree outside. The patio to the north, intended to overlook a future swimming pool, is shaded from the afternoon sun, with the adjacent breezeblock wall allowing for cross-ventilation.

Chloe called on her grandfather, Bob Andrews, to assist with the joinery metalwork. Although he has spent a lifetime building aluminium boats, Bob was initially unsure that his tools would allow for the fineness of detailing required, but he and Chloe worked together to adjust the design to suit the tools. The aluminium frame of the kitchen bench, bathroom joinery, entry stair balustrade, front gate, outdoor dining table and the barbecue bench were coated in a paint that gives them a dark, grainy metallic finish.

Inverdon House challenges the current paradigm of stock housing in North Queensland, demonstrating that living there “doesn’t need to be uncomfortable or expensive.” Chloe has used everyday materials in alternative ways and reinvigorated the level of detail and craftsmanship characteristic of local traditions. The mentorship of older builders, engineers and tradespeople provided a valuable learning ground for both the young graduate architect and the local tradies. This learning, and the simplicity and generosity of the design and construction process, extended beyond the small town as Chloe documented the project via Instagram. This tough but delicate project extends the modernist linea ge in myriad delightful ways and is an incredible credit to a rising young talent. 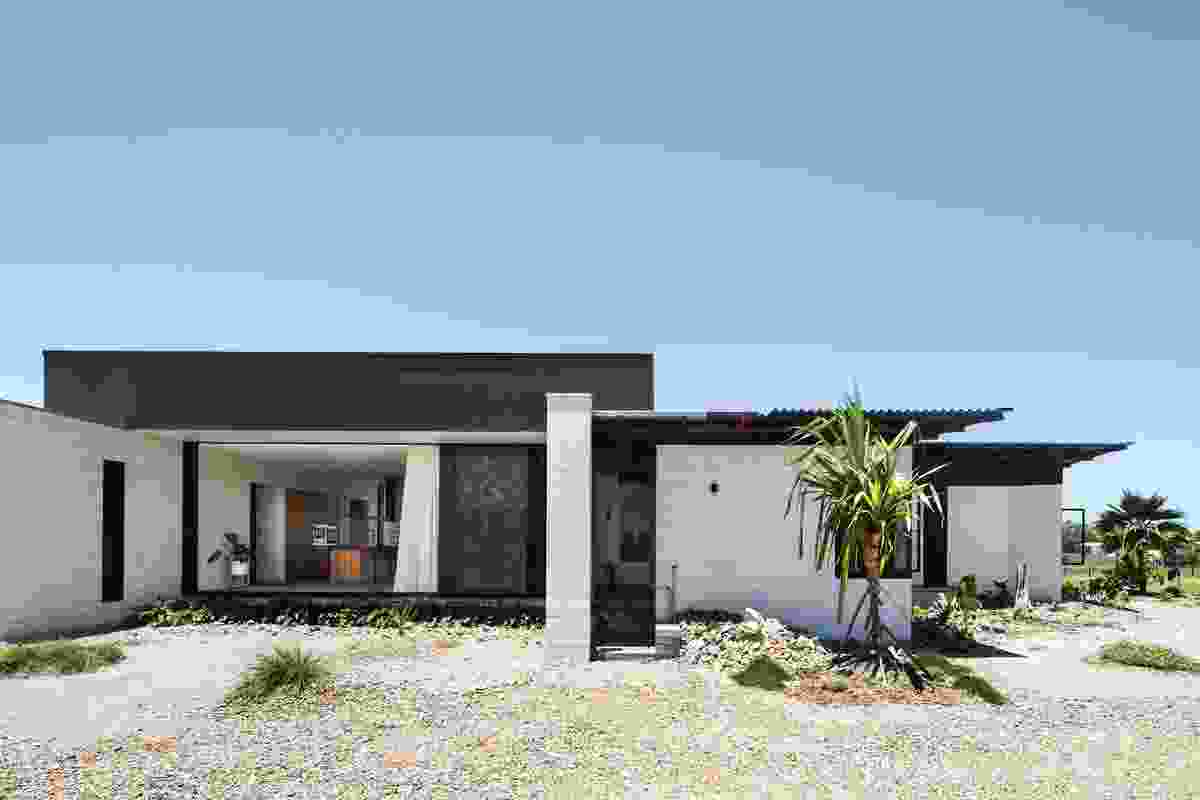 Timber-framed skillion roofs top the house, with the largest section draining rainwater into a box gutter to be collected in tanks. 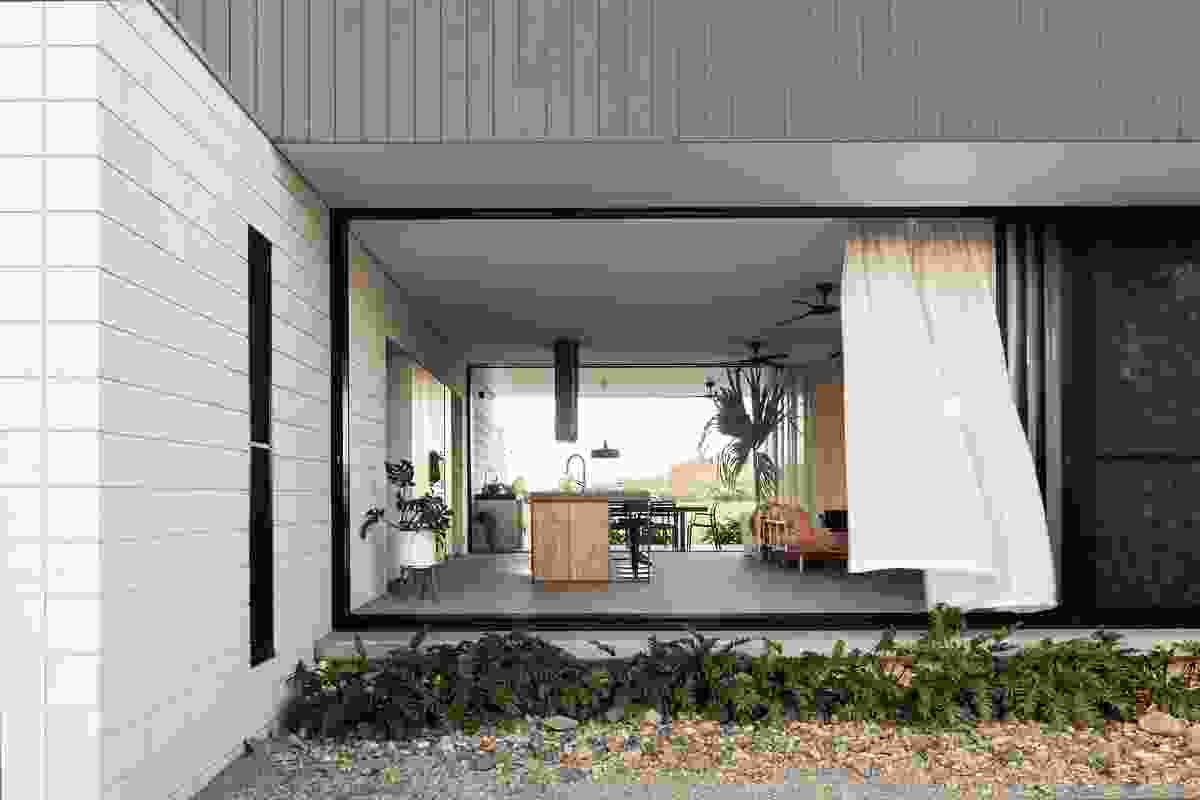 Large openings invite the breeze indoors, connect the interior with the garden and enable impressive views through the core of the home. 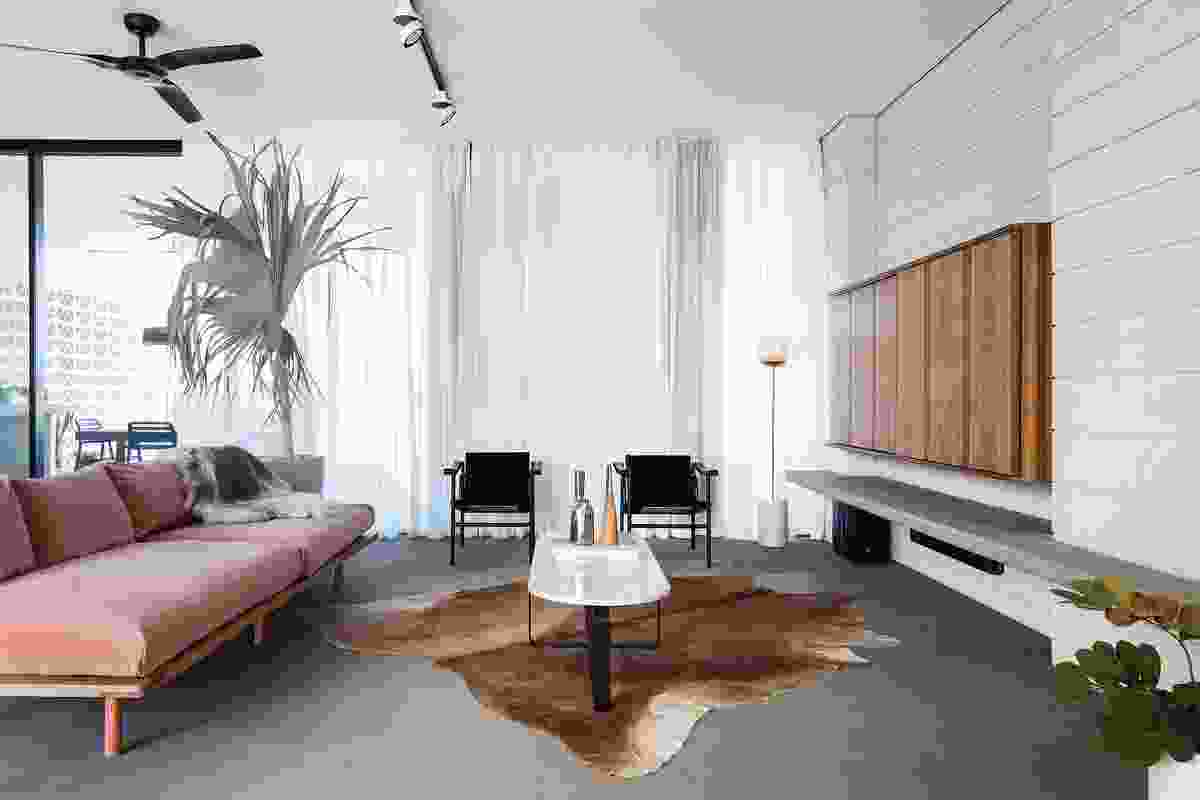 The open-plan living area is divided into three zones – kitchen, lounge and dining; a TV alcove determines the location of the lounge area. 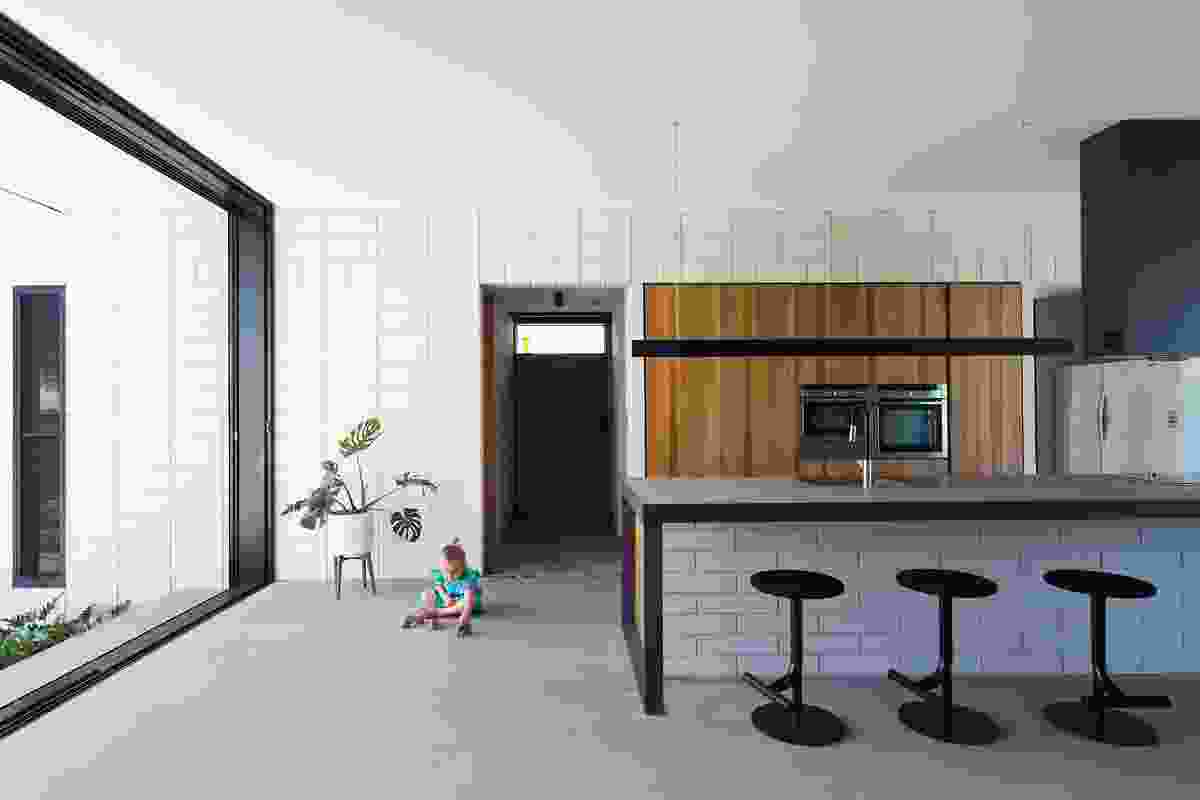 A timber veneer wall forms the backdrop for an island bench, framed by a slender light fitting and a box that houses the extraction unit. 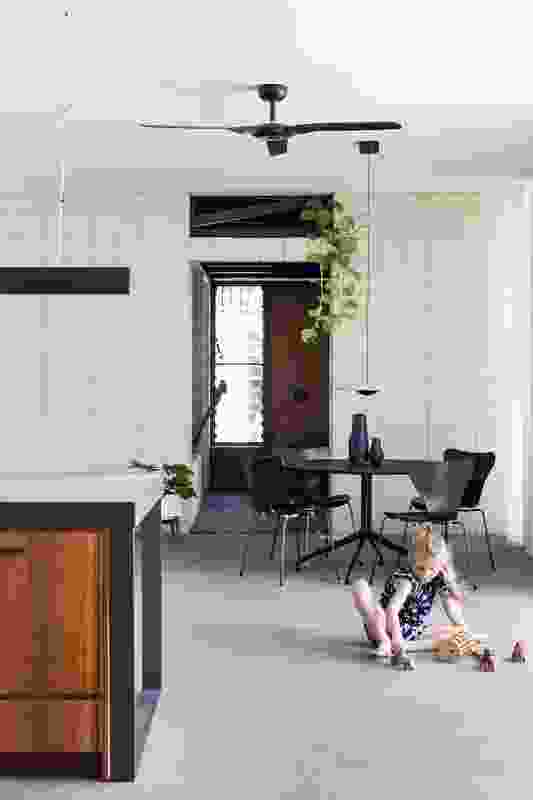 Chloe Nauhgton called on her grandfather to assist with the metalwork, including the island bench. 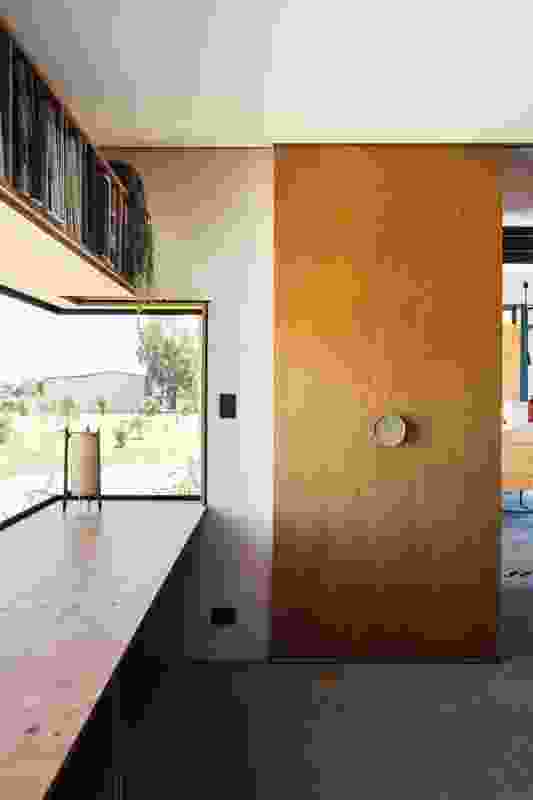 The study, bathroom and main bedroom form a suite to the east; glazing frames a grassy paddock. 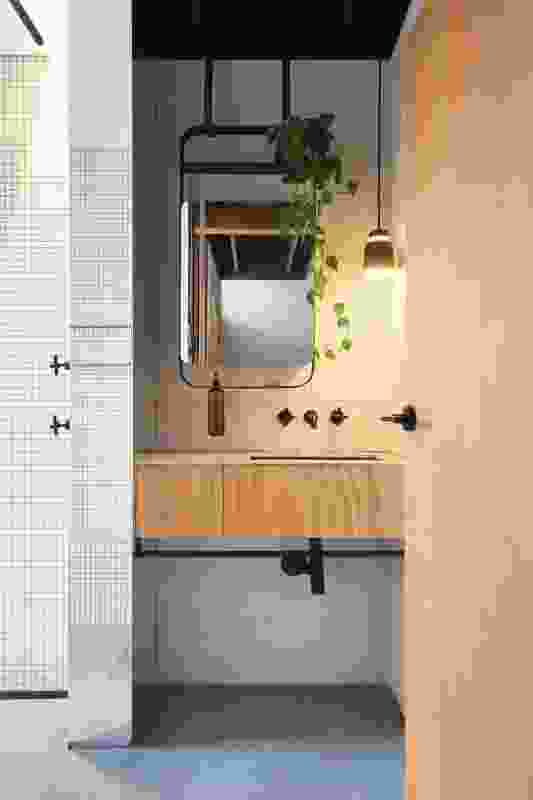 The project is ambitious in detailing and the design was adjusted where required to suit the tools available. 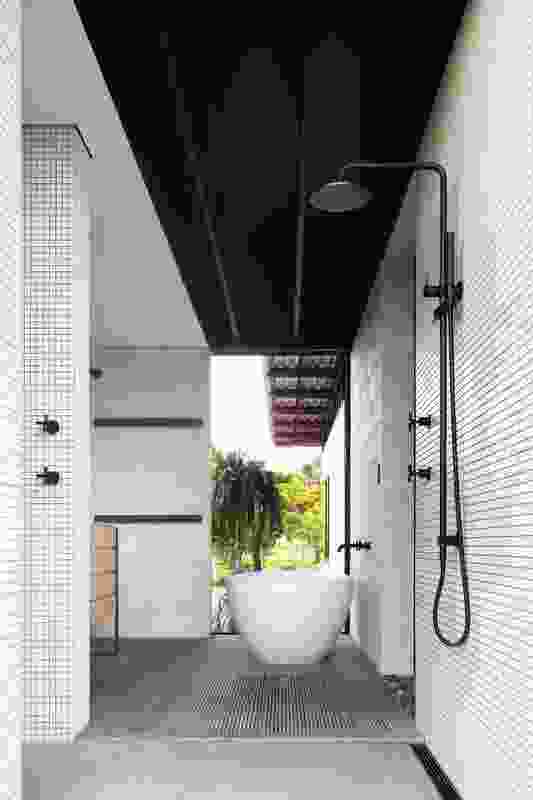 The indoor/outdoor bathroom is an inviting space that offers calming natural light and views of greenery. 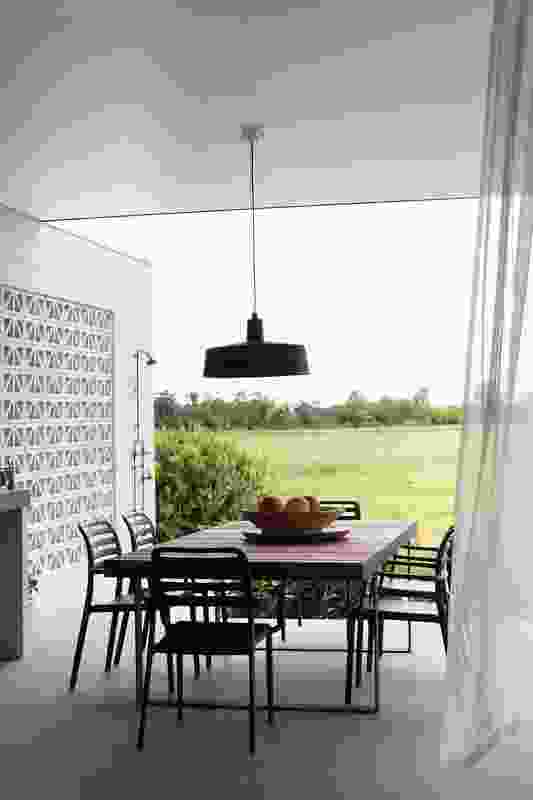 The patio is shaded from the hot afternoon sun, and the adjacent breezeblock wall allows for cross-ventilation.