Investigating kitchen trends of the moment, we discover that the island bench rules and colour is not too far behind.

Our love affair with open-plan living continues unabated, and the kitchen remains firmly at the heart of that space. But the inherently messy nature of kitchens has led to a trend to remove as much of the clutter from view as possible. In Dimitty Andersen’s renovation of a period home in Adelaide, the public face of the kitchen is reduced to a simple, elegant elevation – a narrow bank of white cupboards, housing the oven, cooktop and a concealed rangehood, with a table-like dark timber workbench in front. At the client’s insistence the sink, and other untidy workings, are tucked around the corner in a wall of joinery along the side of the room.

While none of the other featured kitchens in Kitchens + Bathrooms 05 are quite as pared back as this one, many share the same streamlined aesthetic. Tobias Partners’ kitchen tucks unobtrusively into one end of a wall of glossy white joinery, with a large island bench that contains one of the materials to make an appearance lately: concrete.

Easy to clean, cool to the touch and with a utilitarian aesthetic that is elegant at the same time, concrete features on the floors of several living spaces. It also forms the walls of Steendyk’s kitchen and tops the island bench in several others. In the Tobias Partners kitchen, a warm grey concrete bench rises out of a floor of the same material to support a cantilevered benchtop of Corian, which overhangs one end to provide a casual eating area.

Andrew Maynard uses the same device, extending his island bench into a concrete-topped dining table sitting on a raised timber floor. Like the Tobias Partners kitchen, a prominent feature of the Maynard space is the extractor fan, with twin fans housed in polished stainless steel cylinders that hover above the bench. No longer hidden unobtrusively under joinery, extractor fans make their presence felt in two other kitchens (Hecker Phelan & Guthrie and Nobbs Radford), where they are boxed in custom-made timber housings.

While white is still a favourite for kitchen joinery (in laminate or 2-pac finishes), timber is increasingly adding its warmth, just as it is doing in bathrooms. Some designers use it sparingly – for selected benchtops, drawer fronts and display shelves (see Mac-Interactive and David Boyle) – while others contrast it deliberately with cooler materials (Nobbs Radford). John Wilkin and Susanne Pini fashion their entire kitchen in the stuff.

It’s a brave architect who specifies colour as bright as the canary yellow of the kitchen in Lippmann Partnership’s house. But, as architect Ed Lippmann explains, the kitchen is the focal point of the house and the strong colour makes a visual exclamation mark. Nobbs Radford uses colour almost as boldly in its house on Sydney’s north shore, where three tones of rich emerald green, coupled with matching colour-backed glass, beautifully complement the other timber, black stone and pigmented concrete elements in the room, as well as connecting with the colours of the bush outside.

Because kitchens occupy part of the open-plan living space, defining the zone is important and the island bench acts as a buffer as well as a central meeting point. Almost every kitchen in this volume features an island bench and they come in a range of sizes and materials. As the central focus of the space, they are often treated differently from the other joinery in the room. Marble or reconstituted stone is popular for its classic good looks, stainless steel for its no-nonsense practicality. Benchtops sometimes incorporate one of the room’s chief functions, usually a sink or cooktop, and light fittings are often suspended over them to provide task lighting where it is needed and accentuate their starring role.

Room11’s kitchen departs from the norm by turning the entire kitchen into an island. Both the lower bench and the upper cupboards wrap right around the work space, rather like a commercial show kitchen or cocktail bar. Building in the round means that some other key elements (the pantry and fridge) are housed in a service core directly behind. Clad in a deep charcoal, the doors to the pantry and concealed fridge provide a dark backdrop to the all-white kitchen, highlighting its stand-alone form and adding to the element of theatre.

The public face of the island bench is increasingly being given a function. Cut-out shelves break down its form and give it a softer face that sets the tone for the living area, as well as providing valuable storage space for cookbooks and magazines.

In terms of appliances, there are gas and induction cooktops, with electric ovens often of the pyrolytic variety. If there’s space and the budget to cover it, clients are requesting two ovens (a conventional and perhaps a steam oven) and a variety of built-in cooktop features, such as wok burners and grills. 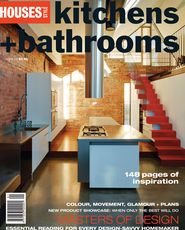 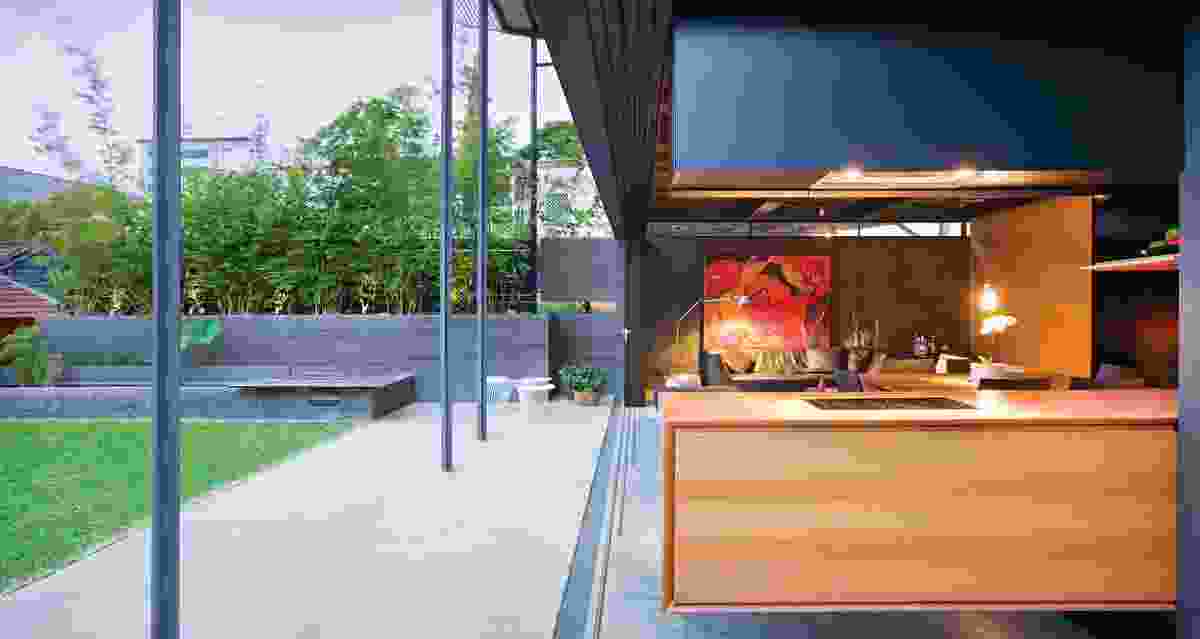 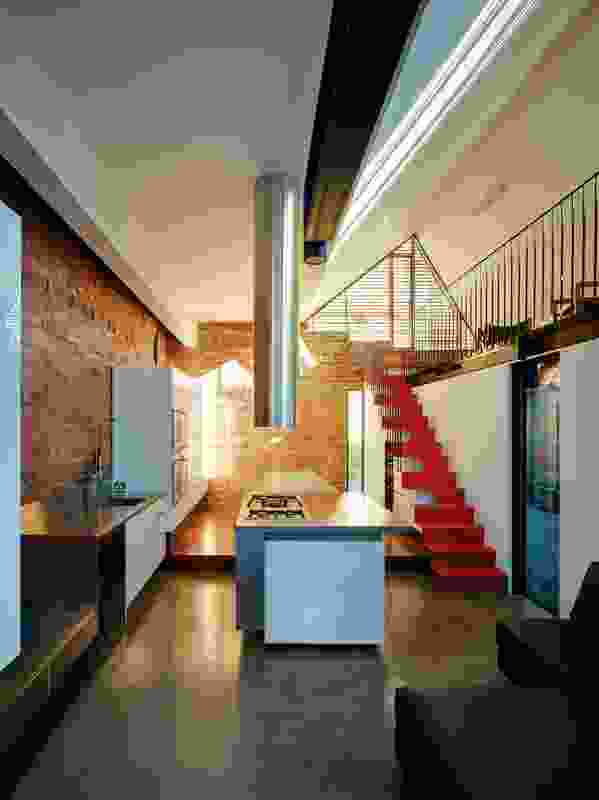 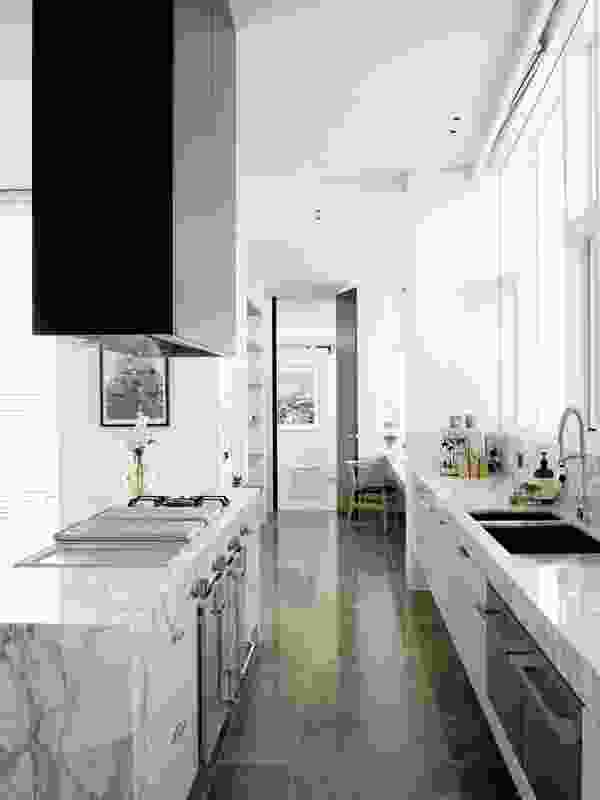 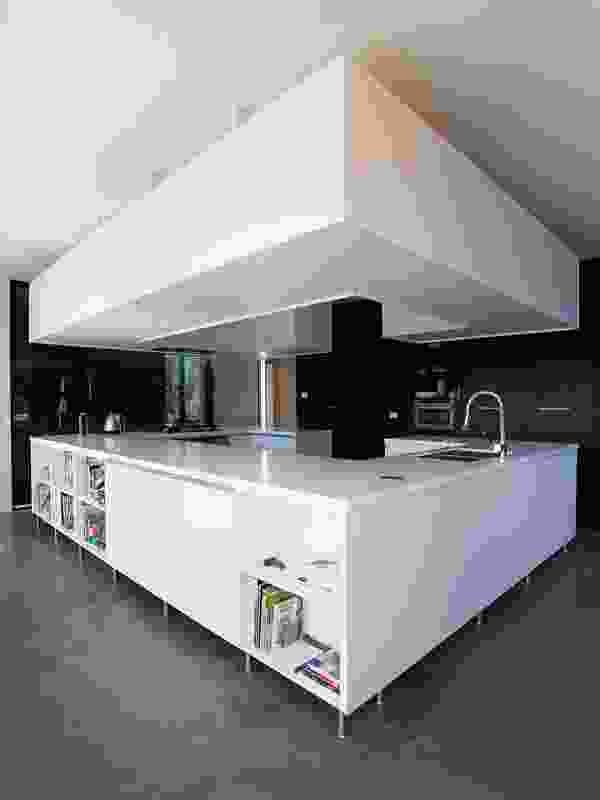