Verdant terraced gardens and finely crafted joinery stitch this reimagined Queenslander to its place and past to create a relaxed home and studio for the architect and his young family.

A terraced garden, filled with vegetables, herbs and blooms, descends to the architecture studio on the lower floor of the house.

This exciting reimagining of a 1920s weatherboard “porch-and-gable” house in Paddington marks the return of architect Scott Petherick, director of SP Studio, to Brisbane. With extended family residing there, it made sense that Scott would settle in Brisbane after a decade and a half spent working in Melbourne and abroad. When acquired by the Pethericks, the house had already undergone renovation, but the original layout and detailing were mostly intact. A deep, L-shaped verandah wrapped the home’s south-western corner, with living, dining, kitchen, bathroom and three bedrooms located upstairs and a workshop downstairs in the stump space, enclosed by typical subfloor battening. Prized among the existing trees on the site, in the north-eastern corner of the sideways-sloping backyard, was a beautiful spreading jacaranda tree.

Scott designed predominantly in section to get the levels to work; he remodelled the fall of the site into a raised lawn, to achieve simple family living on one level, with terraces down to another lawn along the northern boundary. Over the newly fashioned landscape, he imagined the sprawling jacaranda laying its purple carpet and casting dappled shade. The extent of new building on the main living level includes a generous family kitchen pavilion, connected to the rear, south-eastern corner of the existing house, and the reworking of a corner bedroom that has been expanded to become a parents’ retreat. Together, the pavilion and the “pushed out,” extended volume of the parents’ suite enfold a fireplace court, which aligns to the raised lawn and the interior living and dining spaces. Framed by the jacaranda, the view north stretches over the green swathe of rear gardens rising on the opposite side of the gully.

Beyond the crisp edge of the raised lawn, the terraced gardens hold vegetables, herbs and flowers, convenient to the kitchen. Concrete steps mediate the connection to the lower lawn. Opening onto this quiet northern green are the new downstairs spaces – Scott’s architecture studio and office, an informal living area, a fourth bedroom and a combined bathroom/laundry – which can be accessed directly from street level. The existing workshop space under the front of the house is unchanged. Here, Scott keeps a treasured heirloom of a wood lathe. It belonged to his grandfather, a fine woodworker whose handmade furniture and small artefacts Scott has tenderly incorporated into the dwelling.

Materially and visually, Scott formulated a graphical order that celebrates distinctions between traditional and contemporary elements, while compositionally uniting the whole. Between upper and lower levels, the starched-white clarity of the main body of the house appears to float on the plinth-like, blackened and shady recesses below. The horizontality of weatherboard is given a counterpoint in the introduction of vertically battened walls and screens. White brick is introduced as a “stitching” material that honours thresholds between old and new spaces, inside to outside, and vertically anchors features such as the fireplace hearth.

The kitchen pavilion is the prime element of the transformation. Scott has orchestrated a relaxed and refined sense of place that the family loves and inhabits with enthusiasm. The white brick threshold announces the feeling of a space that is more outdoors than indoors, like living on a patio with comforts inbuilt. While entirely contemporary in its language of concrete, steel, glass, and fine oak joinery, the pavilion follows the spirit of traditional construction in the elegant expression of connections and detail at all scales. It’s a deceptively simple, framed structure set upon a concrete slab that projects to hover over the raised lawn. Perfect in its “earthiness,” the concrete floor is honed to expose its fine aggregate. Ebony-finished stacking doors slide away into battened pockets to open the interior to the north and east. A little barbecue terrace, one-fifth of the pavilion’s area, whimsically hosts a rope swing, bringing a sense of play to the poised architectural expression. The skillion, with its battened, upward-sloping eve, looks up to the north, drawing in the jacaranda’s living colour as well as the dappled light and shade that the tree provides.

The interior is elegantly furnished with bespoke joinery elements that do more than one thing, such as the countertop that steps down to a generous family table. This multitasking tactic is deployed in new joinery details, expressed as wraps and folds against the existing fabric of the house. Scott has also designed fine, freestanding pieces that join those his grand-father crafted. Most touching are the little “places” Scott has shaped into new surfaces, designed to hold small items that his grandfather made and to keep them close by, such as the small vessels that sit in his studio desk.

Had the Pethericks stayed in Melbourne, Scott could predict their lifestyle in a typical terrace house. As interesting as living “at the back” of a terrace might be, the character and quality of traditional Brisbane housing suggested greater opportunity. “There’s a lot of playfulness in the old Queenslanders,” muses Scott. Exploiting this freedom, he has shaped a versatile response that engages Brisbane’s benign climate and offers a variety of spaces for his children to enjoy. The Jacaranda House is where his family will grow together, beneath the colourful blooms and in the embrace of a place designed to adapt to their changing needs.

Other
Escea firebox and flue. 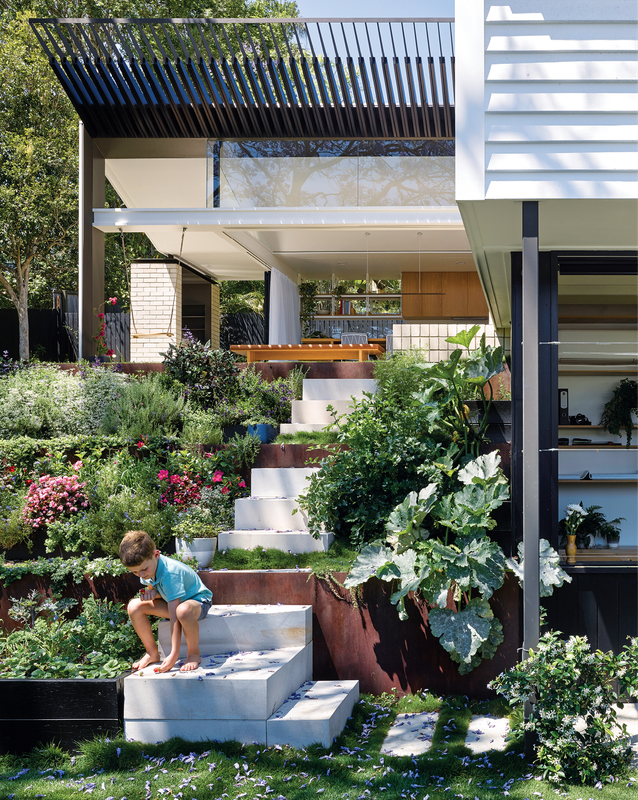 A terraced garden, filled with vegetables, herbs and blooms, descends to the architecture studio on the lower floor of the house. 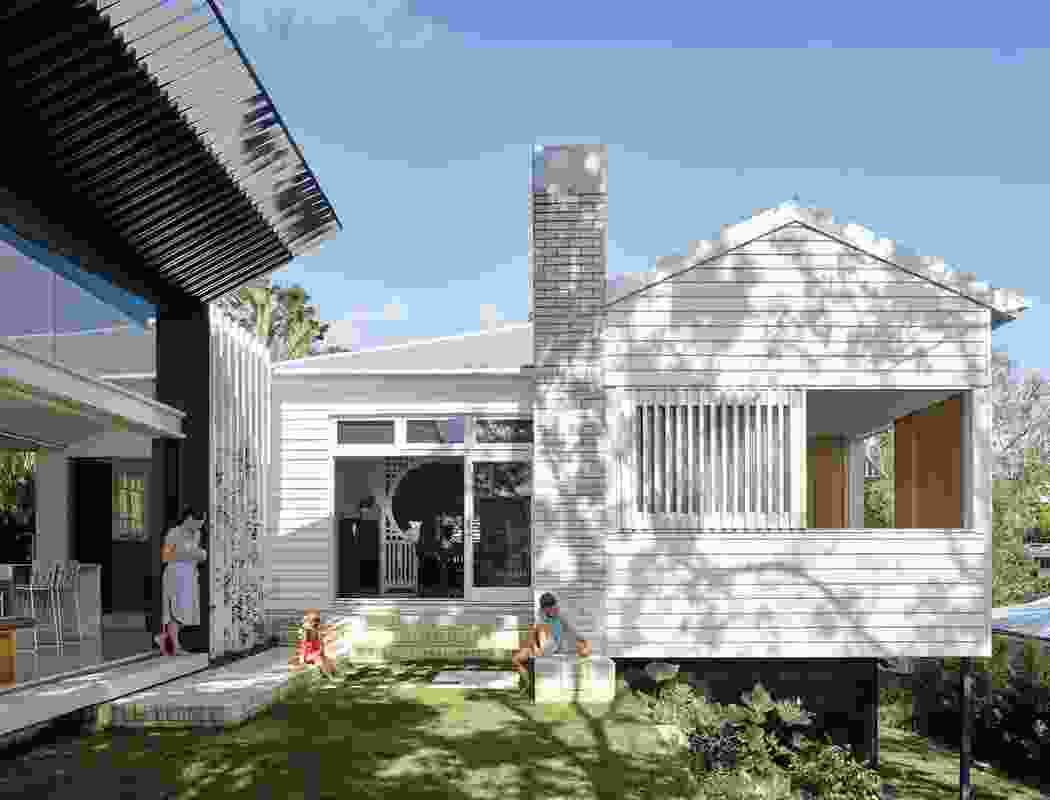 A filigree eve tapers upward to the north and, together with the jacaranda, casts a gentle, ever-changing pattern of light and shade. 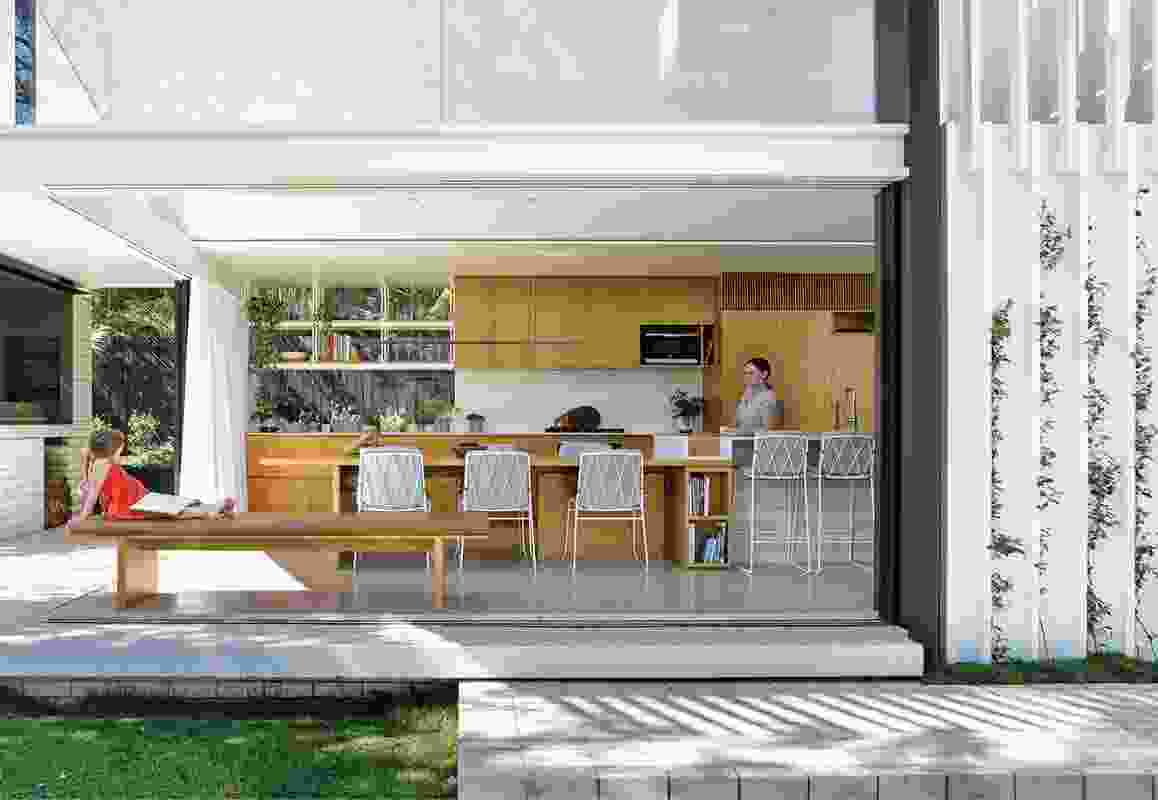 The pavilion encourages relaxed family living on one level, poised to take in views over the gully. 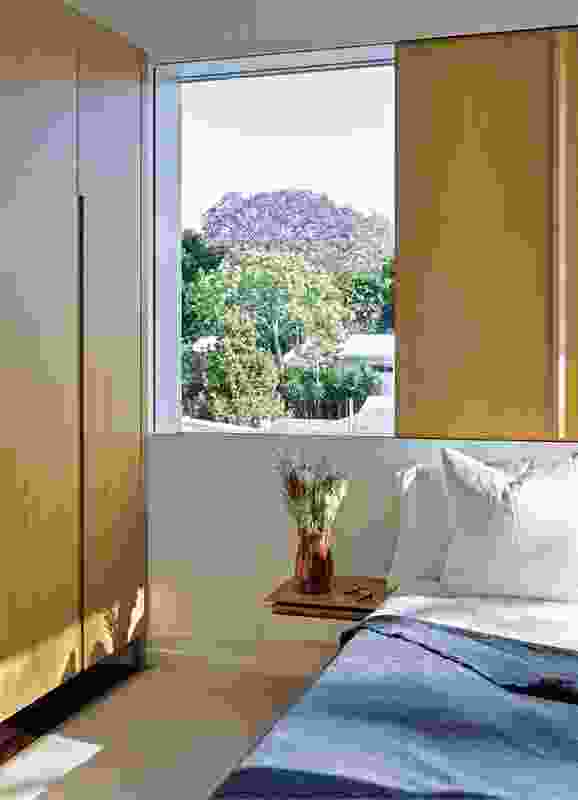 Elegant new joinery elements are expressed as wraps and folds against the original fabric of the weatherboard “porch-and-gable” house. 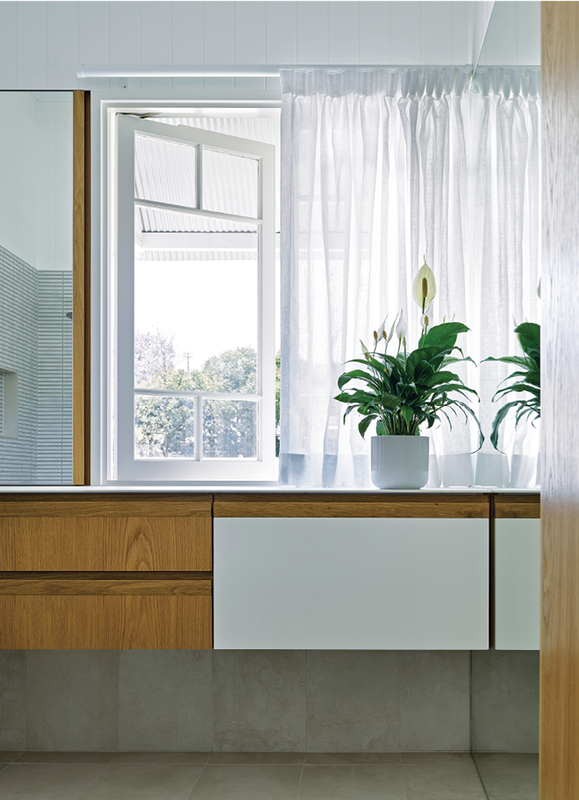 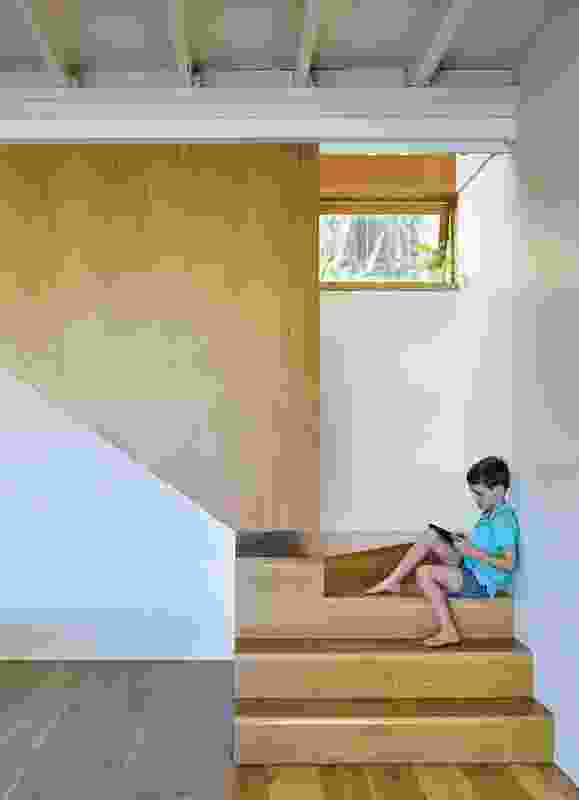 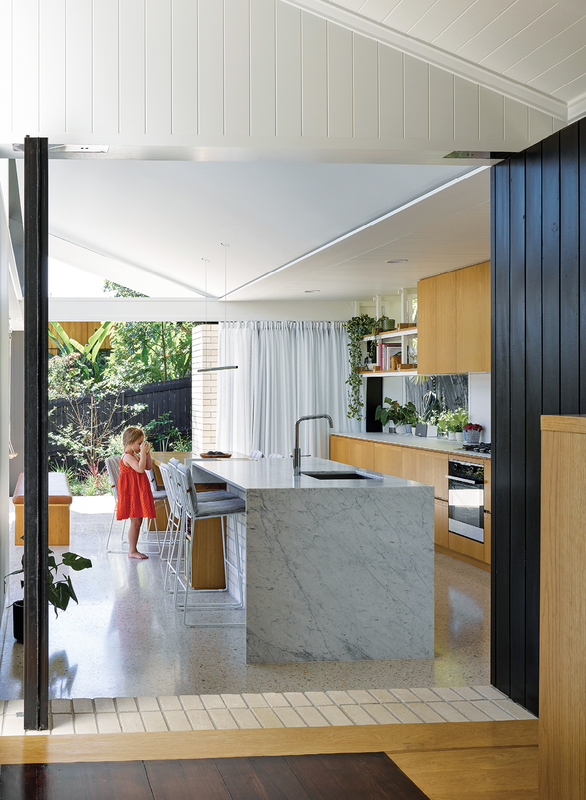 White brick is used to underscore the new kitchen pavilion’s connection with the outdoors.