When complete, the tower will be Ateliers Jean Nouvel’s first project in Melbourne and the firm’s second project in Australia following the One Central Park apartment project in Sydney.

The 242-metre, 70-storey tower will accommodate 488 one-, two- and three-bedroom apartments and a 196-room hotel. The tower, located at 383 La Trobe Street, will be adjacent to the former Royal Mint site and the Republic Tower designed by Nonda Katsalidis in 2000.

The tower was approved despite exceeding the plot ratio limits of Melbourne’s interim planning controls. The development will have a plot ratio of 29.1:1, more than the allowable ratio of 24:. In a statement, the minister said “the building meets the requirement of delivering public benefit.”

The development will create a new laneway to the east, which will run along the rear of the tower between the heritage brick wall of the former Royal Mint and Queen Street. The laneway will act as a continuation of Guildford Lane.

At end of the new laneway will be a book exchange (a highly curated library) run in collaboration with Victoria University, which will allow the public to borrow and contribute books.

“This street library reads as an extension of the heritage wall,” said the 2008 Pritzker Prize Laureate, Jean Nouvel.

In all, around 30 percent of the 2,850-square-metre site will be publicly accessible at the ground plane, as well as one of four sky gardens designed by Oculus.

“383 La Trobe Street wants to be welcoming and alive,” Nouvel said. “Behind its great urban gate, passageways branch out and connect to the main streets of the neighbourhood, creating a mini-neighbourhood of laneways and covered porches.”

The design of the tower will be characterized by four distinct facades, each responding to different aspects of its surrounding context. The north (front) facade will be coloured red in deference to the red brick heritage wall of the former Royal Mint; the east facade will be gold, reflecting colours Nouvel observed in Melbourne’s urban character; and the west facade will be lined with a green wall in reference to the nearby Flagstaff Gardens.

The south facade is inspired by a curtain in Frank Lloyd Wright’s Hillside Theatre at Taliesin, an 800-acre estate that was an architectural incubator and Wright’s home from 1911 to 1948. The design reinterprets the curtain as a curtain wall for the tower, which will be made from different types of glass. It will also engage with the glazed facade of Victoria University’s proposed 32-storey campus tower designed by Jackson Architecture.

The facades will also have a gridded appearance, due to each apartment or room in the hotel being framed with architectural fenestration that protrudes 500 millimetres from the perimeter of the building. The frames will be lined in a different colour on each side, which will produce an overall visual effect of a “360 degree kinetic facade” or a building that changes its appearance as a person walks around it.

The Office of the Victorian Government Architect’s (OVGA) assessment of the proposal observed the building will be “far from a standard glass box.”

It will be “a strong and beautiful piece of architecture, offering a strong contemporary contribution to the city,” said the OVGA. 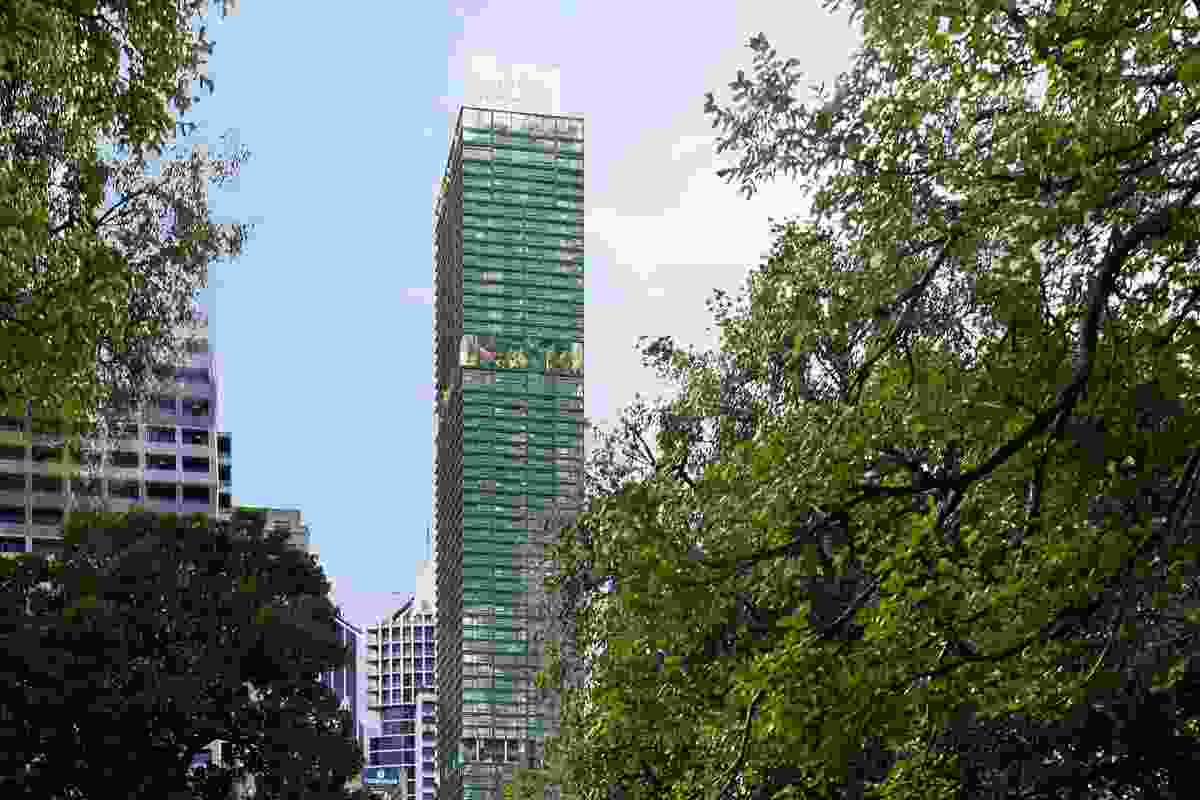 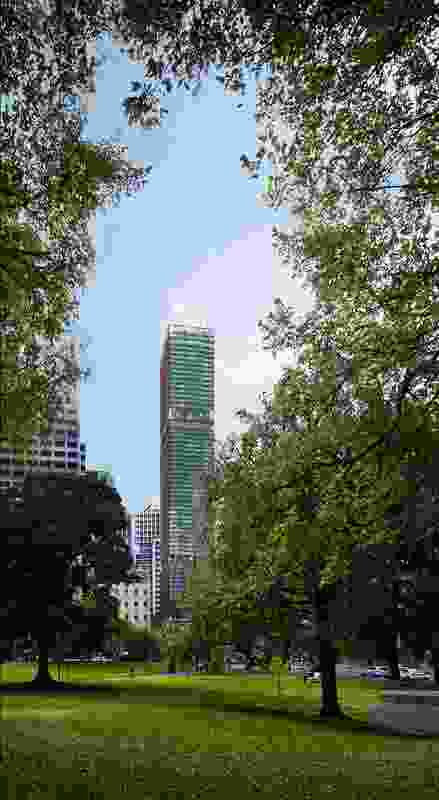 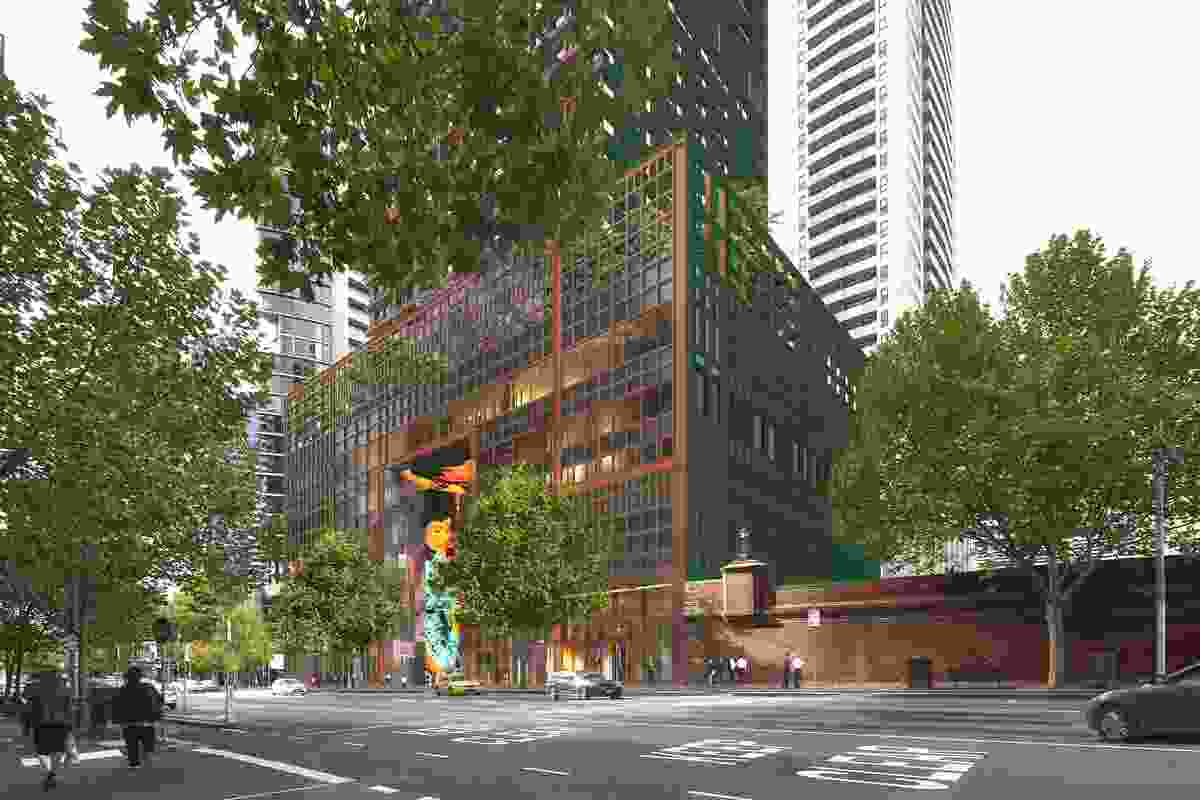 The podium of the mixed use tower at 383 La Trobe Street designed by Ateliers Jean Nouvel and Architectus. 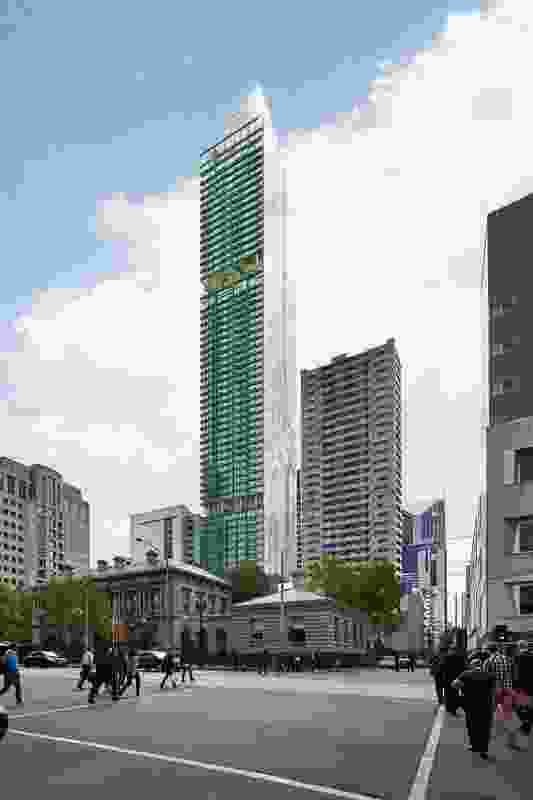 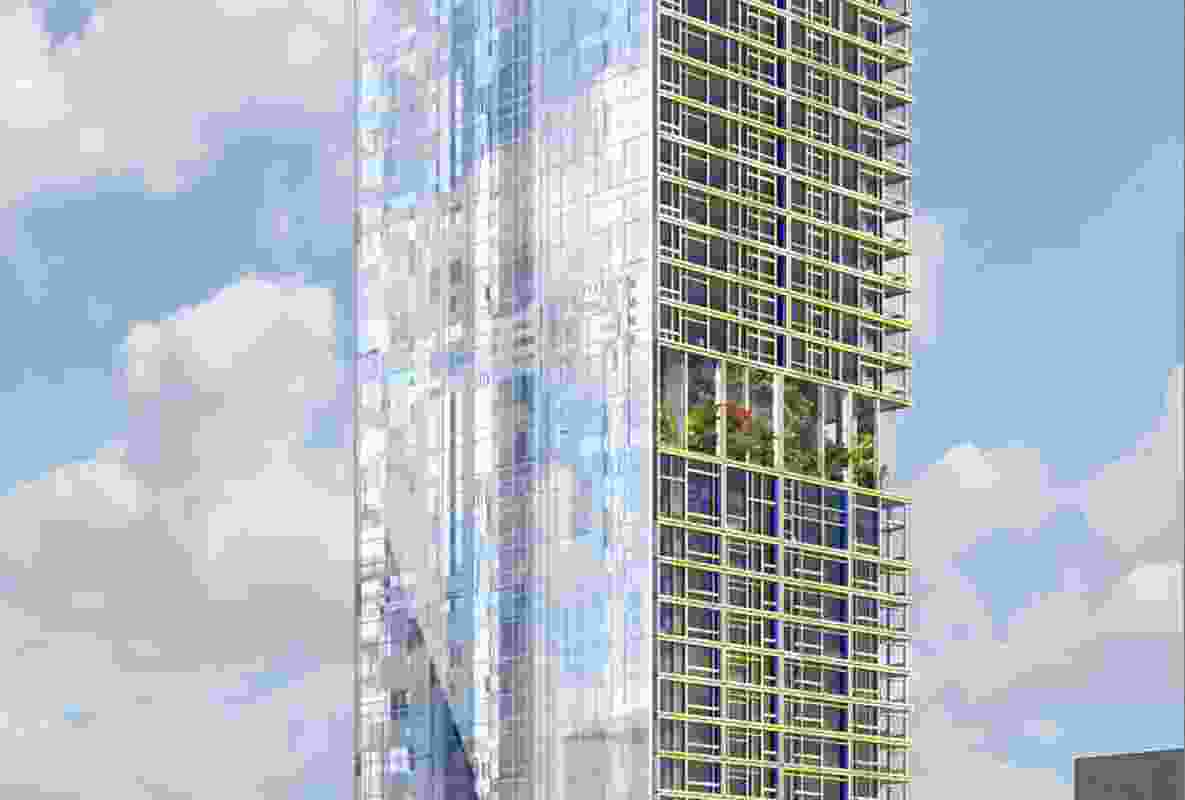 The south facade of the tower by Ateliers Jean Nouvel and Architectus reinterprets a curtain in Frank Lloyd Wright’s Hillside Theatre at Taliesin into a curtain wall.