A couple downsize in comfort and style as Karen Abernethy Architects transforms their single-storey Victorian terrace into a light-filled suite for two.

The new part of the house is bold, minimal and full of light, with a joyful expression of materials.

There undoubtedly comes a time in many people’s lives when the family sanctuary, once so beautifully full and refreshingly familiar, becomes strangely unbefitting. The endless noise of children’s chaos fades and metre upon square metre of emptiness suddenly appears, now conveniently free for limitless storage. Such sentiments would surely hold resonance for the clients of Jewel House, who, after sharing their generously sized North Melbourne terrace with their five daughters for some twenty-five years, decided to make the move and downsize to a smaller, single-storey Victorian terrace in Melbourne’s inner-city suburb of Carlton. But with two-and-a-half decades’ worth of hoarding, it became apparent that their much smaller residence would need some adjustment to be comfortably transformed into a suite for two. They decided to build the renovation themselves and sought advice from Karen Abernethy Architects to help realize their vision.

Within the confines of the existing exterior walls, the front section of the house was retained (it is located in a heritage overlay area) and its program changed to include a bathroom, main bedroom and study. This also became an informal entry, offering itself as a place to pause before the inner realm is revealed. To provide natural light – so highly sought after and so difficult to obtain in terrace dwellings – a light court was cleverly devised between the bedroom and bathroom, an interstitial space that visually highlights original detailing through full-height glazing in the corridor.

The rear section of the house, built of double red brick and thoughtfully crafted with dovetail details and bullnose corner brickwork, was carefully demolished and all salvageable materials retained for use in the rebuild. With the integrity and tradition of the existing materials palpable, Karen resolved to design an addition that was a reinterpretation of the original house’s character and finesse.

On transition from the existing to the new, moving through a doorway carved within an internal facade of Russian birch ply joinery, the materiality is intrinsically alike but its treatment notably distinct. At this point of transition, a bold volume of light and lucidity is revealed and the language of the renovation begins to be spoken. Internally, the palette becomes an infusion of ply, bagged and white-painted brick, plasterboard and concrete. Its details were inspired by those of the existing house, reinterpreted to suit an interior that is minimally adorned yet beautifully rich, its execution honest.

The addition now spreads itself across the entire width of the site, while its form is dictated by various site constraints in the way of neighbouring properties and height restrictions. The resulting triangulated portion is occupied by the kitchen, dining and living areas, with a lofty mezzanine that is accessed by a sculptural stair suspended in the centre of the volume. The stair, also made of steel and ply, was methodically designed, acting not only as a means of ascent, but also as a porous division between the dining and living areas. Its weight and permeability were of immense importance in maintaining sight lines and allowing the continuation of natural light from both the rear elevation and the skylights that punctuate the crisp white ceiling. At the level of the mezzanine, articulated on the western flank to provide sensitive shading, a lattice brickwork wall was designed and constructed from the reclaimed bricks, each brick gently spanning the space made by the separation of the two below. Beautifully crafted and observed from both levels in the addition, the lattice brick invites dappled sunlight into the volume and casts dances of patterned light and shadow against the height of the raking plaster ceiling.

A second structure was erected at the rear of the site. Taking its inspiration from the form of the extension but rotated at ninety degrees, the stand-alone bungalow is clad in corrugated iron and presents itself as a garden shed against the red brick and greenery of the garden. It provides storage, a bathroom and the possibility of another one to two bedrooms, offering the house flexibility when the accommodation of extra family is required.

For the past six years, Karen has spent her time living and working between Melbourne and Switzerland, which perhaps, in the case of this renovation, allowed her to draw parallels between European domesticity and the reimagining of a piece of Australian heritage. In practice, Karen sees her work as “an opportunity to make something beautiful” and where possible will design everything, right down to the light fittings. In the design and construction of the Jewel House, the fact that the clients were also the builders, and that the building process was closely managed by the architect, allowed many design decisions to be made on site. Through this collaboration, they have transformed a diamond in the rough into a precious jewel. 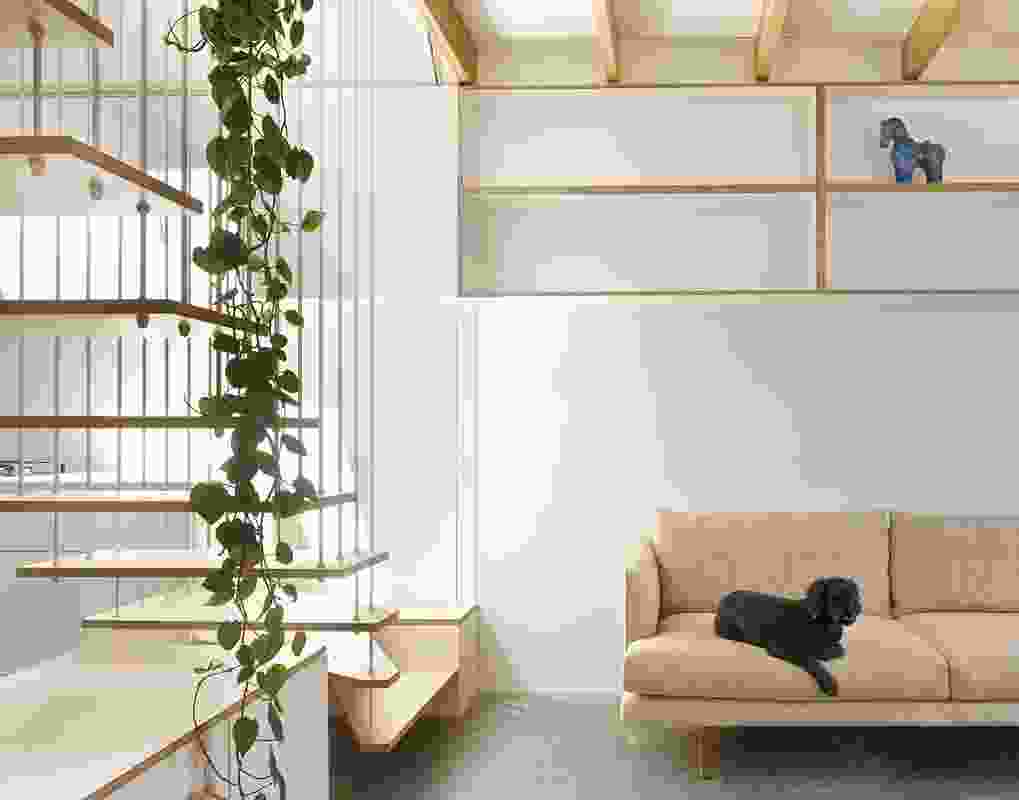 The new part of the house is bold, minimal and full of light, with a joyful expression of materials. 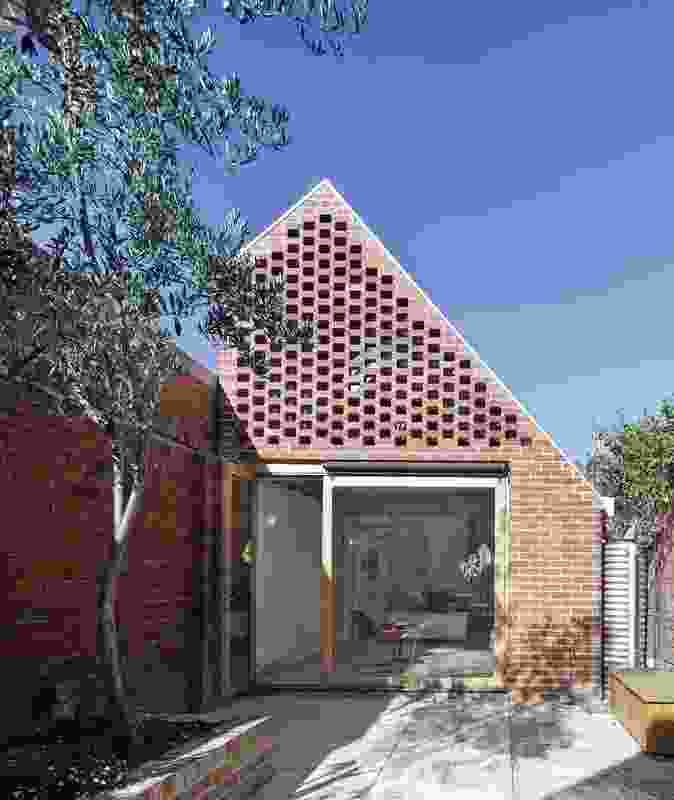 A lattice wall, made of reclaimed bricks from the demolished rear, shades the western edge. 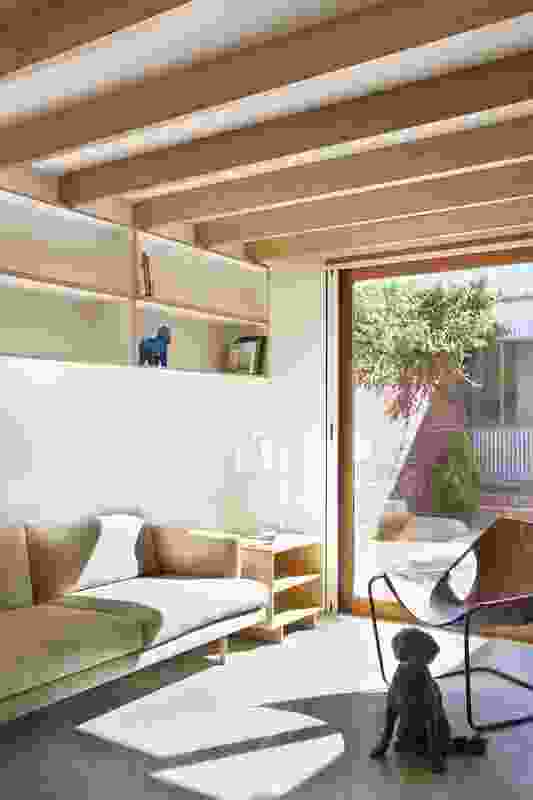 Visiting family can be accommodated in the stand-alone bungalow at the back of the site. 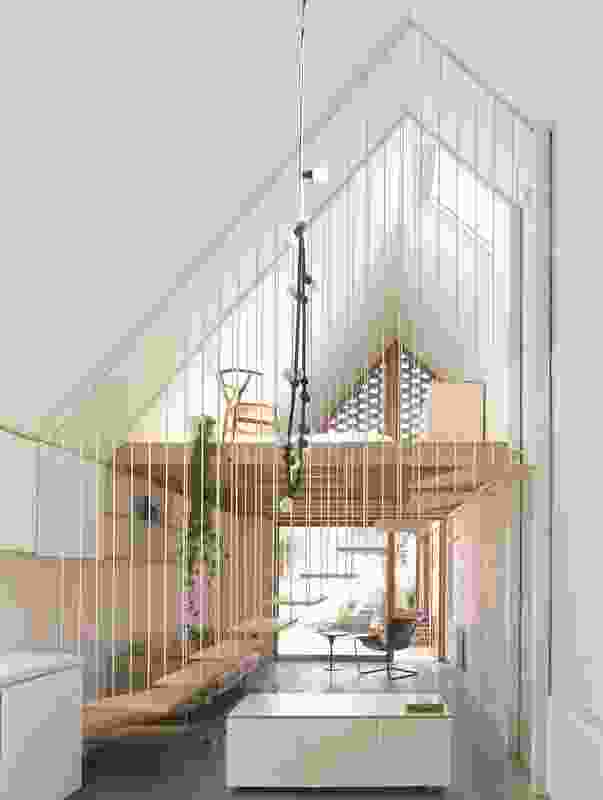 A sculptural suspended stair acts as a porous barrier between the dining and living rooms. 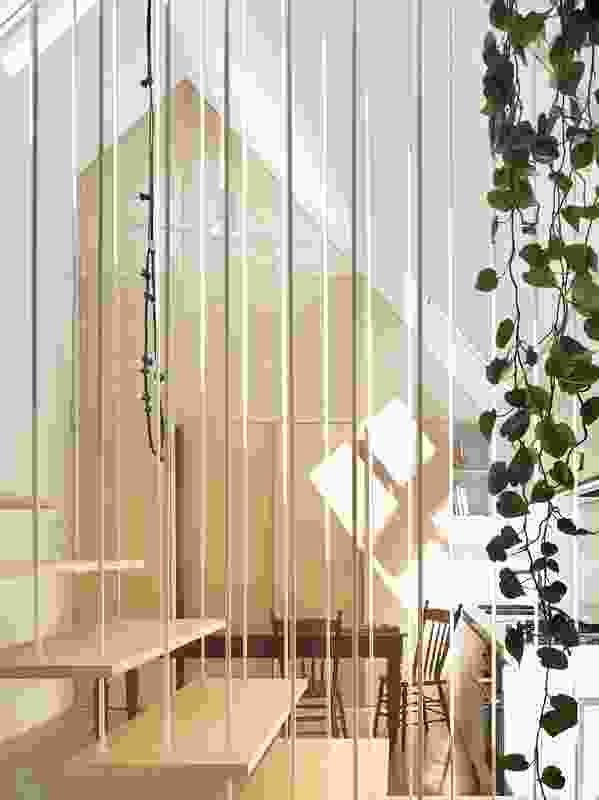 The suspended stair had to be permeable to light from the skylights and rear elevation. 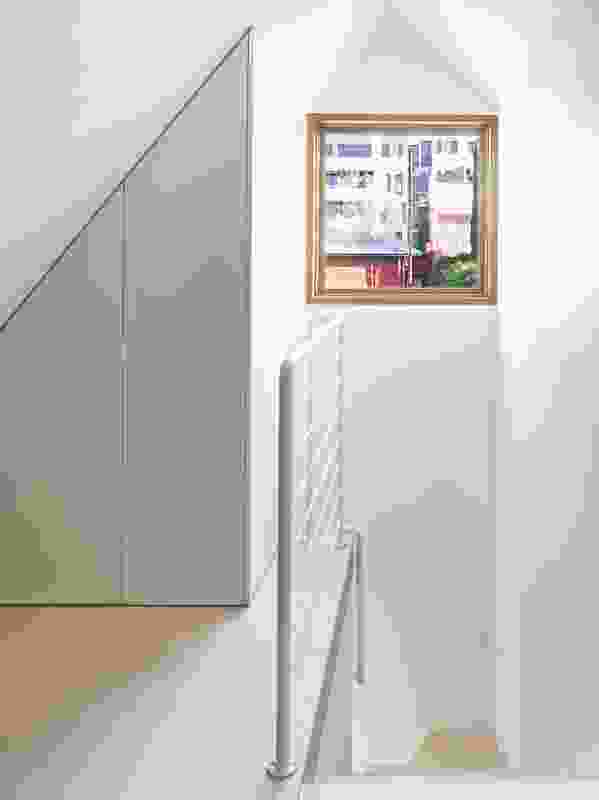 Every detail has been carefully considered in the downsizing process. 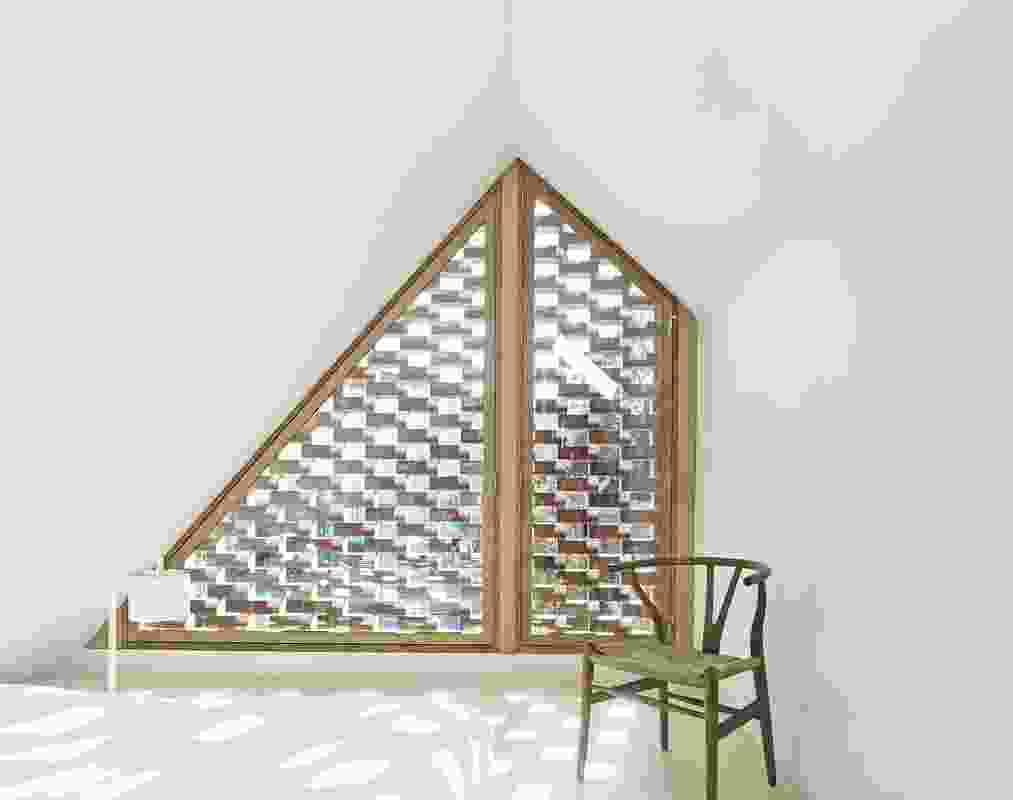 The lattice brickwork filters dappled sunlight into the mezzanine bedroom.