Into the fold: Jule House

Delicately referencing a family’s past while offering a setting for contemporary living, this spiralling home by Claire Humphreys and Kevin O'Brien Architects is a creative response to a challenging site.

The plan folds around a central “naturalistic” courtyard in response to existing trees and the proximity of neighbours.

In her book A House for My Mother: Architects Build for Their Families, Beth Dunlop writes: “The houses architects design for their parents are plied with many layers of meaning, even if on the surface they seem to be simply houses … they are not, even possibly, objective works of architecture. They are personal, in one way or another, and they are heartfelt.”

The Jule House is one such work, designed by Claire Humphreys (in association with Kevin O’Brien Architects) for her mother. It was commissioned in 2009, just as Claire finished her formal studies, and completed in 2013. “She waited for me to graduate,” says Claire, who started working with Kevin in 2006 while she was a student.

For this project, Claire and Kevin came to an arrangement whereby Claire would do the work to realize the house and Kevin would underwrite it in his practice. “It was typically generous of him,” says Claire. “We already had an effective working relationship and he is very positive about mentoring people.” As Claire worked on the design, Kevin shared his knowledge and experience through regular dialogue in response to any knots or quandaries. “It’s a much better house because the two of us were working on it,” she says.

The house feels comfortable for one but also includes options for multiple alternative occupancies. It is a puzzle piece designed to be “intentionally complex” yet “logical and legible,” says Claire. The shape emerged in the considered handling of constraints that derive from the setting, deep in the avenue contours of Brisbane’s St Lucia. Situated on a subdivided lot, the house has eight neighbouring dwellings to “defend” against, an unusual situation by any measure. Eight significant trees and a plotted overland flow waterway directed an arborist and an engineer, who inscribed the first lines from which the house would form.

When approaching the house, the founding concrete walls set up an interesting relationship with the sloping ground that permeates the experience once inside. Partially cut into the site, the house rises from this embedded condition (in the living and dining areas the close horizon is the fall of the ground) to slink up and almost over itself as it folds like an origami spiral. Models scaled at 1:200 and 1:100 helped Claire explain the early sketches of this novel form to her client. While Claire’s mother had imagined a U-shaped solution based on the need to tread lightly around the trees, she believes Claire’s final form is a “very clever” response to the challenges of the site.

As Claire and her mother’s original family home was on a neighbouring block, they already knew the important views and prospects to preserve. Because of the waterway overlay, there is a swathe of gully land that can never be built on. Claire has opened the house up to this green view, the spiralling ascent of the dwelling’s form enfolding an unconventional and naturalistic courtyard. This soft and sunlit patch is an important orientating element for the surrounding circuit of spaces. There is an engaging transition in the design of the three sides that define the edge of this area, particularly in the busy elbow of space you first land in on the main level of the house. Seemingly part of the sophisticated interior, this little L-shape of circulation is permanently open to the central clearing, achieved with the use of a secure mesh. The ambiguity between indoors and outdoors gives a strong sense of connection to the landscape that is so clearly respected by the architect and client.

The main level hosts a bedroom and ensuite in the north-west wing. A trapezoidal study nook occupies the vertex that points back to the entry drive. A small sitting area nestles in the transition between levels, with four steps rising to the dining area and kitchen. As the space most directly connected to the little clearing, the kitchen/dining area feels grand and generous, with ingeniously designed sliding doors that allow finetuning of the relationship to the outdoors. For flexibility, Claire designed a mobile benchtop unit, which makes the area readily reconfigurable for larger gatherings of friends and family.

The transition from the dining to the living area (the concluding element of the three-part form) passes through the most acute angle in the plan. This wing opens onto the suggestion of a terrace, again designed to augment the natural landscape gently. A stair reaches up inside the form to an “attic” suite of rooms, which are self-containable in one version of multi-occupancy.

Claire’s choice of materials exemplifies her mentor’s disciplined approach to material and detail. The rendered concrete, metal, painted weatherboard and hardwood with expressed bracing and the shady veil of the secure mesh give the home a quietly resilient quality. The boarded shell presents a blank secrecy to its surroundings; openings are masked behind grey shutter panels, the flipsides of which are coloured in hues taken from the surrounding flora. As a familiar material in an unfamiliar form, the weatherboard strongly emphasizes the relationship of the house to the ground, its distinctive horizontality visually counterpointing the rise and fall of the dwelling and the respected ground it sits within. Claire’s inventive design delicately references memories of the houses past shared with her mother, yet refreshingly reimagines customary patterns of living into a contemporary expression.

Into the fold: Jule House 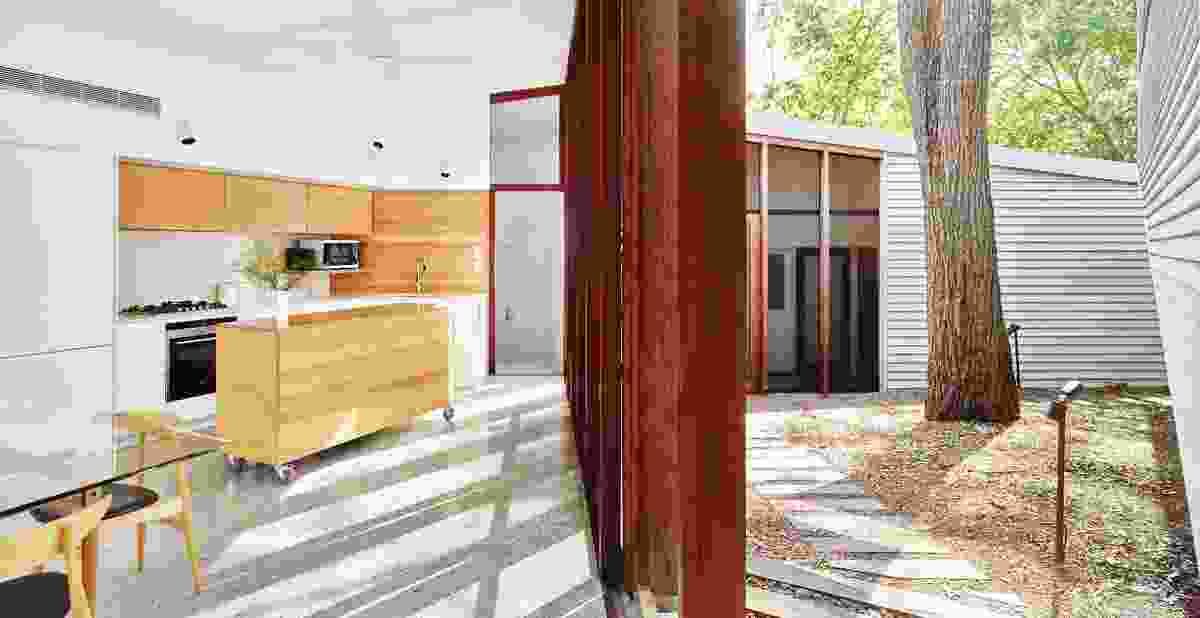 The plan folds around a central “naturalistic” courtyard in response to existing trees and the proximity of neighbours. 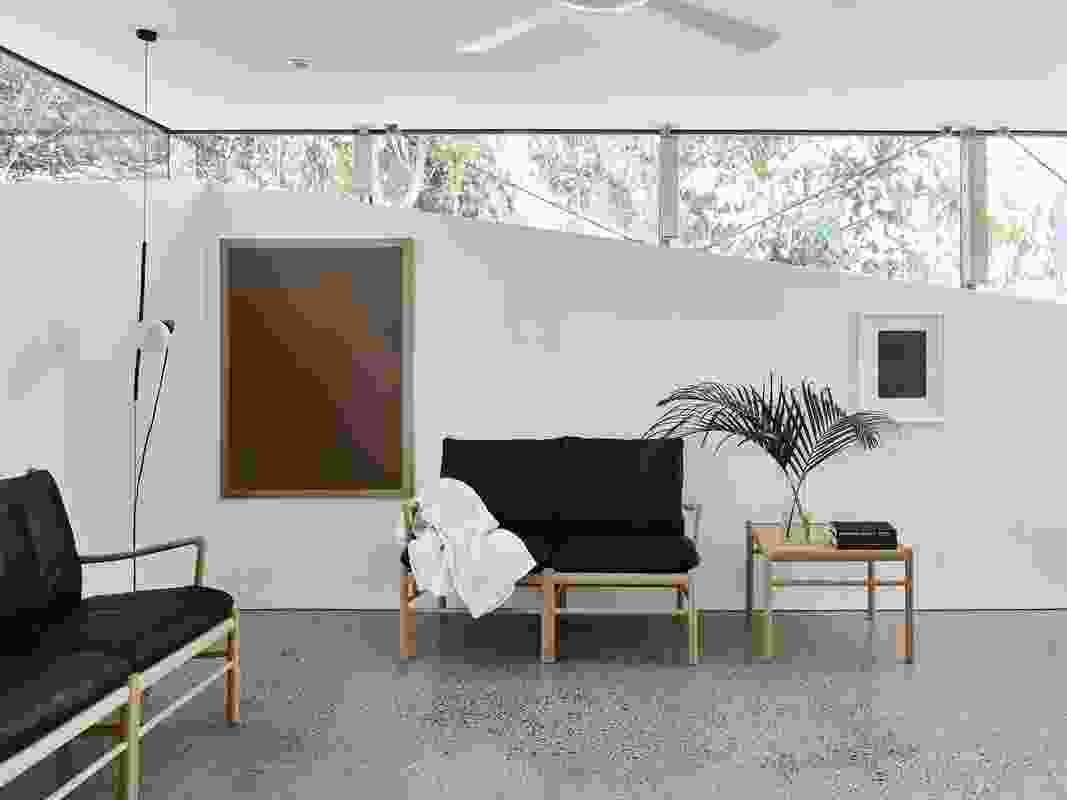 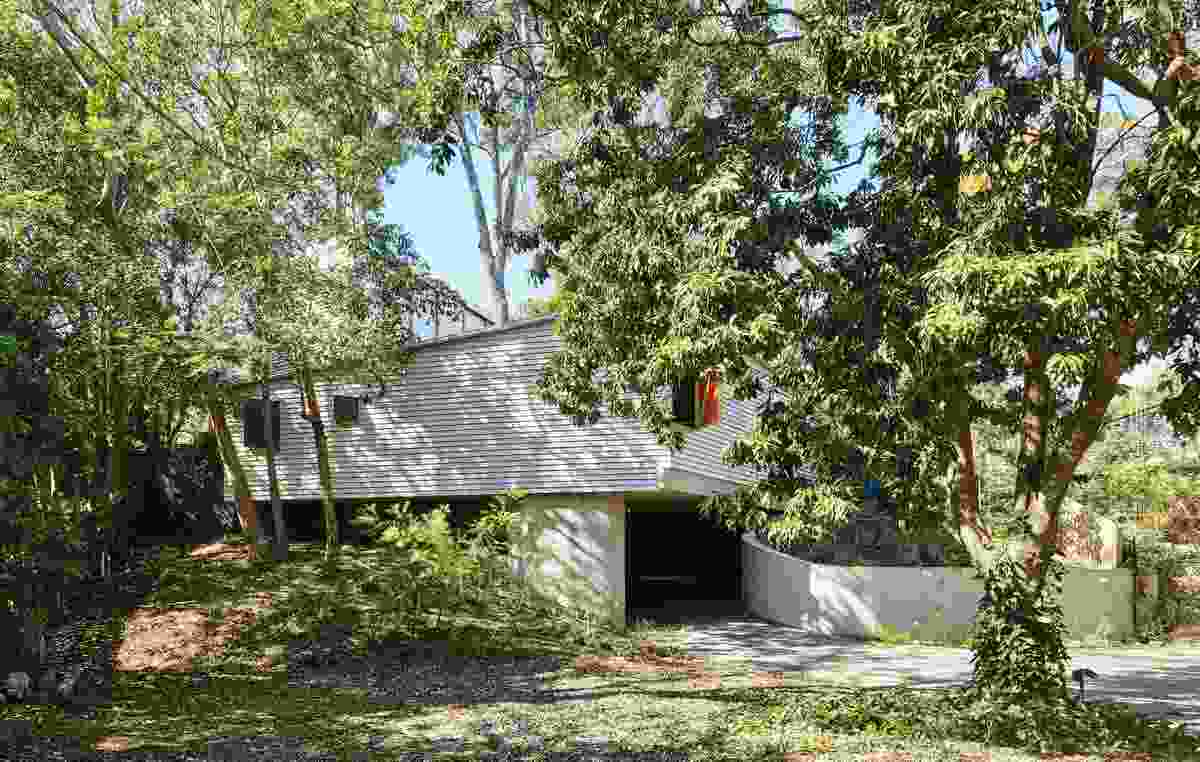 Partially cut into the site, the house rises to slink up and almost over itself like an origami spiral. 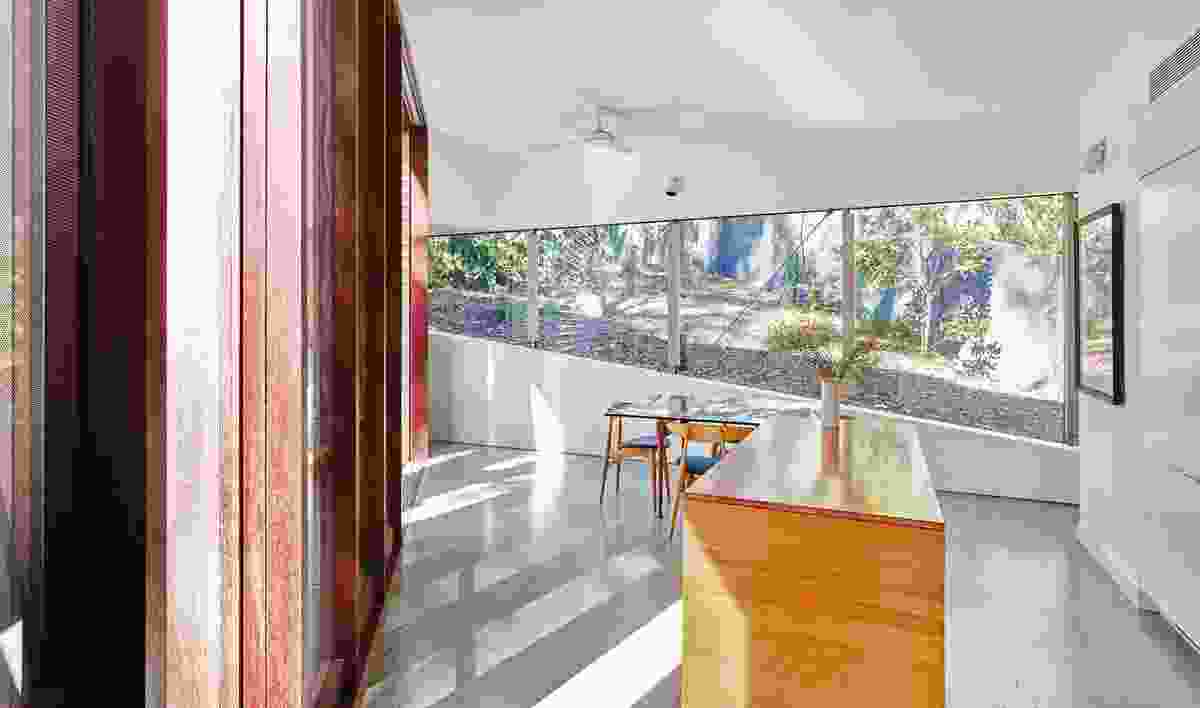 The kitchen/dining space was designed for flexibility of use and offers views to the landscape on both sides. 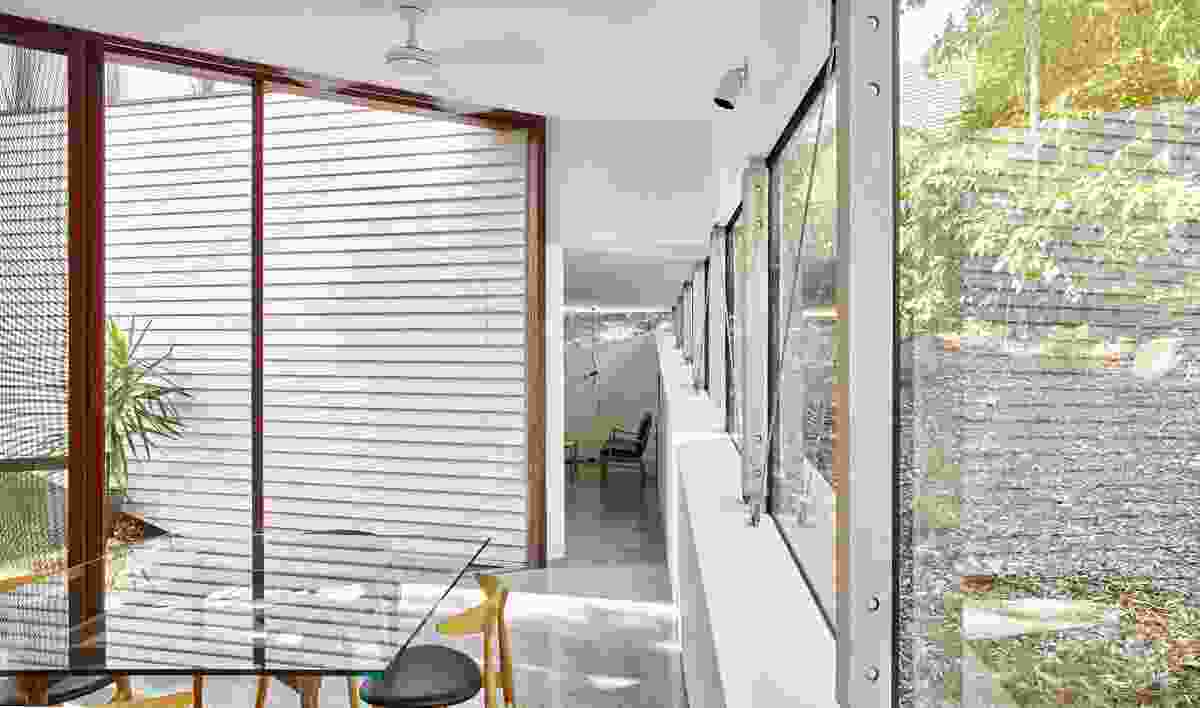 A small sitting area nestles at the transition between levels, with steps rising to the dining/kitchen. 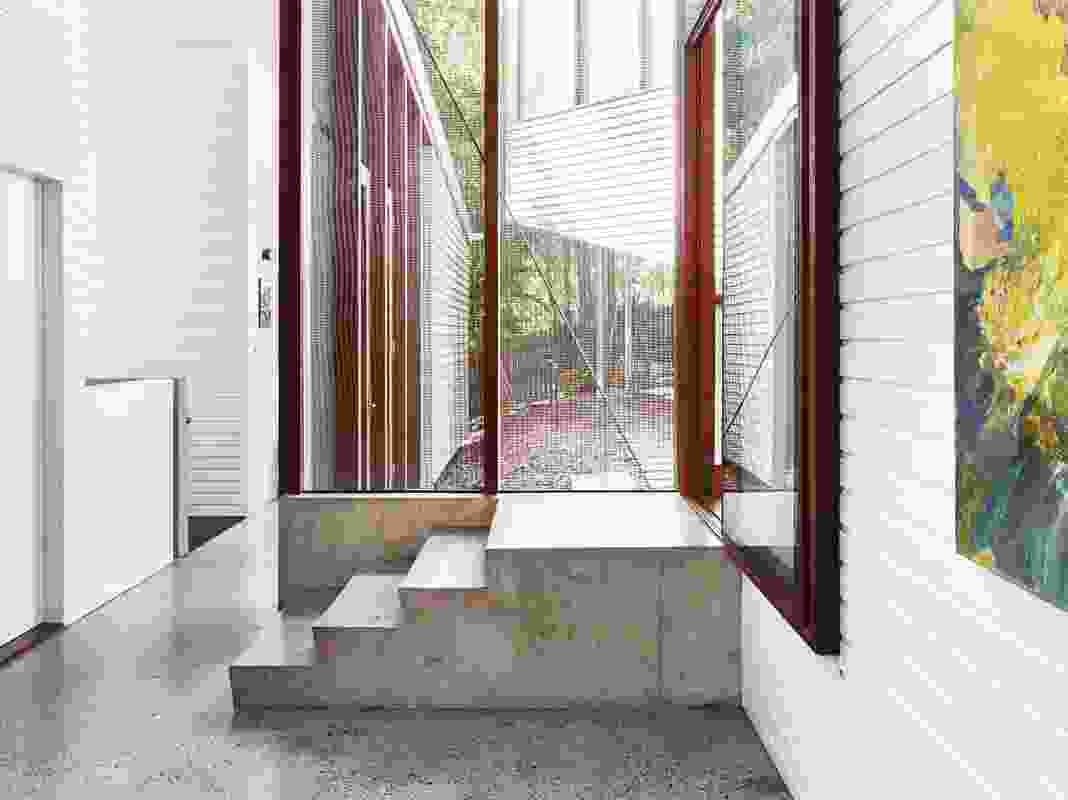 The transition from the dining to the living area passes through the most acute angle in the plan. 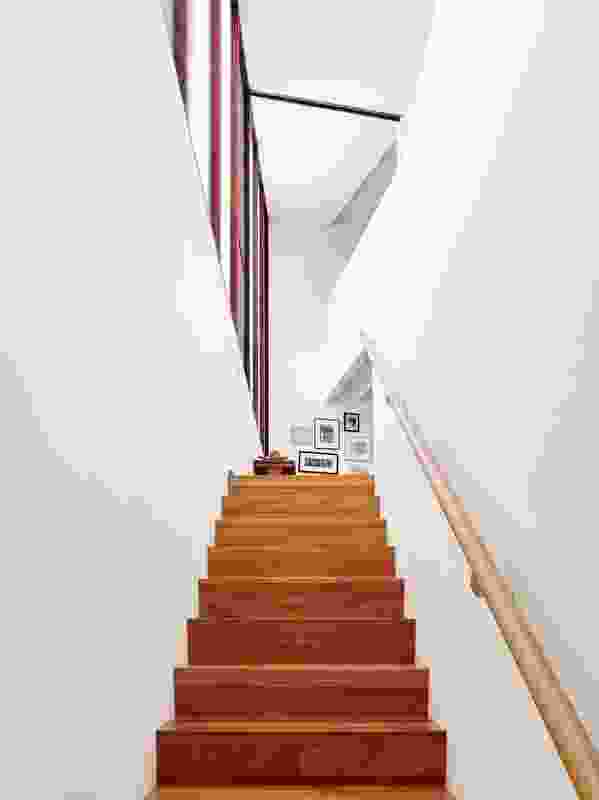 Stairs lead to an “attic” suite of rooms above the main living area.

The rise of the stair is expressed externally, wrapping the house around the internal courtyard. 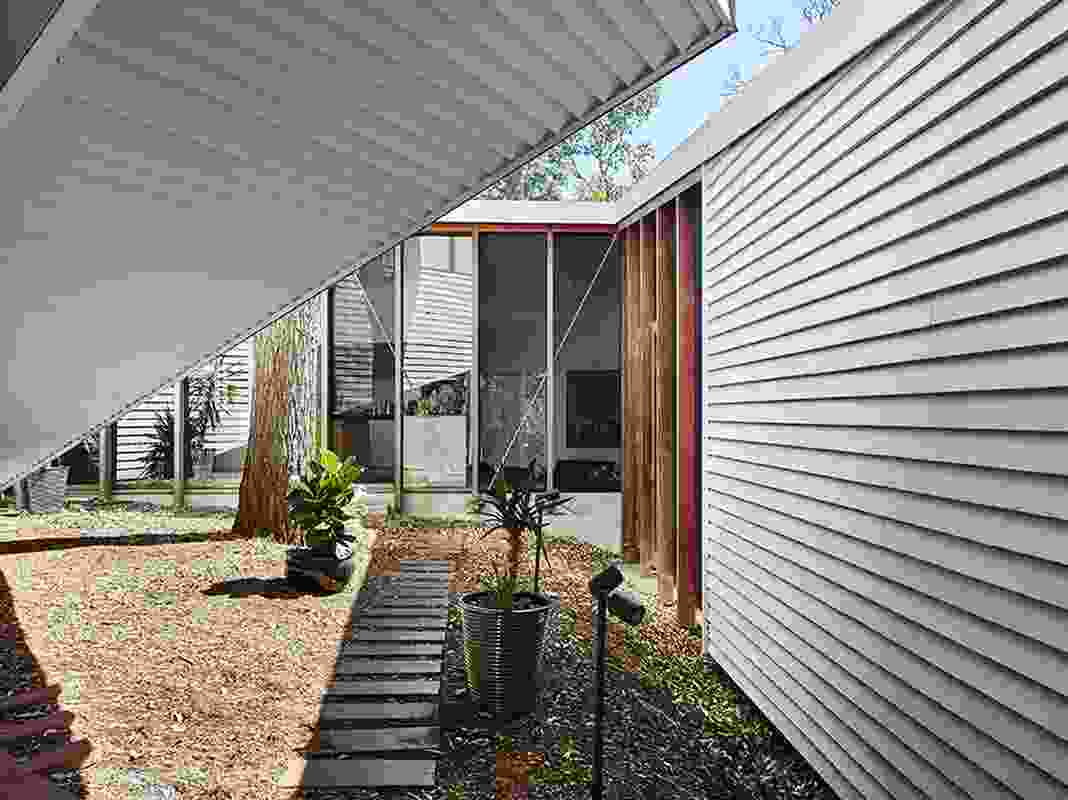 As a familiar material in an unfamiliar form, the weatherboard strongly emphasizes the relationship of the house to the ground.