Architects Lee Hillam and Ashley Dunn of Workshop 1 tell a lovely story about the first public viewing of the new library in the small rural town of Junee in New South Wales. The locals were invited to walk through the building and ask as many questions as they liked. They were pretty quiet until they came to a shed at the back of the library, a room full of tanks, valves, pipes and pumps. Then they started asking questions, lots of questions: about the contents of the room, their function, relations and size, their precise details and how they related to the building as a whole. They spent more time in this one room than they had in the rest of the whole complex. When they’d finished, there was a long silence. Then an old lone voice up the back drawled out slowly, “Soooo … it’s like a Coolgardie?”

Any farmer will tell you that a Coolgardie is an old country fridge, a simple box frame covered with wet cloth to keep the contents cool. It’s a very efficient, low-technology solution to the problem of storing meat and milk in places without power. The architects had never thought of this analogy for the cooling system they had developed for the building, but it was spot on. The moment these words were uttered, a hum of recognition and satisfaction went around, and not only from the locals. For an architect, to have a building accepted is good, but to have it understood is better.

When Dunn and Hillam were invited by Junee Council to turn the dilapidated supermarket in the main street of Junee into a modern library, they set themselves some clear objectives. They wanted to respond with an energy- and water-efficient building, to recycle as much of the existing fabric as possible, and to source new materials from sustainably. They also wanted to respond very particularly to this community, and to this place. Lee was born and raised at Illabo, a few kilometres out of town, and so had a fair idea of the culture of Junee, and the people who sustain it.

Junee is part rail town, part wheat town. On the rail line halfway between Melbourne and Sydney, the township was built up over the last century for the servicing and fuelling of steam and diesel trains. When completed, the Junee Railway Roundhouse was the largest of its kind in the Southern Hemisphere, as was the Junee Wheat Silo. They are magnificent industrial structures, the kind that would have had Le Corbusier reaching for his camera. They tell a lot about the culture of the place and its people – their pragmatism, directness and, above all, their demand for economy of function. So how do you make a library work in this place – really work, like a steam train or a wheat silo?

Junee has an extreme climate. In summer, hot, dry days are followed by crisp, cold nights. The architects knew of a natural cooling system developed in the 1970s in Phoenix, Arizona, which has a similar climate. The system is ingenious. Rainwater is collected from the roof and stored in an insulated tank. The collected water is sprayed in a fine mist from the ridges of the roof into the cold night air, where it cools, falls back onto the cold metal roof, and then returns to the tank for pumping through the floor slabs during the day to cool the interiors. The chilled water is also used for cooling the air in the building, and in winter a heat inverter pumps warm water through the floor slabs, providing all the necessary heating.

Like a steam train, it works. When I visited the building the temperature outside was 42 degrees. Inside, it was a cool 24. If you want powerful first impressions, this is it – forget the photos. Not bad for a building using a fraction of the energy of a conventional airconditioned building. The concrete slab of the library, beautifully polished and inset with local Murrumbidgee river pebbles, is cool underfoot and, moreover, gives an impression of coolness, like a riverbed – a psychological underscoring that the architects are keen to stress.

Socially, Dunn and Hillam speak of the library as being a kind of living room for Junee. There are comfortable chairs and a big table just off the street, so passers-by can see their friends inside and drop in for a chat. People hang around here reading newspapers and from laptops, and there’s a kitchen at the back where you can make a pot of tea. Some local women have even started to bring in ingredients to bake cakes to share around. There’s a nice feeling to this room – it really is a place to just hang out.

The library plan has the reading room at the heart with the books at its centre, giving the room a satisfying weight. There is no attempt to create patronizing “zones” with colour coding, or to create dynamic geometries to give the impression of much activity where little exists. It is a calm space, a bit like my ultimate Sydney book room, the Reading Room at the Mitchell Library, albeit on a much reduced scale. You can wander quietly among the books and take one back to a window seat, which are comfortable, secluded and well lit.

The approach to materials is direct and economical. The building was stripped back to reveal the structure, which is essentially a gable-roofed shed housed within brick walls. Fine Oregon roof trusses were repaired and, where necessary, replaced. Attempts to overtly distinguish original and new fabric were underplayed here, and the room is better for it. The ply ceiling panels complement the Oregon, and give the ceiling a warmth and scale in contrast to the monolithic floor. Victorian ash window joinery with matt black steel surrounds frames a dramatic series of glazed openings from the street into the library, and from the library into the ancillary rooms. This emphasizes the sense of the reading room being an extension of the street, telescoping sightlines from outside to the spaces within. It is a very stark, crisp detail. On the street the steel awning continues the street pattern, as do the ceramic tiles that form the dado. The curved glass announcing the entry to the street recalls similar patterns found locally and in neighbouring towns such as Gundagai. The new ramp to the entry doors provides a suitably scaled approach, and brings the seated eye-line within the building to the level of the standing eye-line on the street. It’s a nice touch, making the connection back to the street from within the library very immediate.

There has been some debate over the years regarding the aesthetic of “the shed” and its place within Australian architecture. This building manages to avoid the pastiche often associated with the appropriation of this type, partly because recycles an existing building, but also because this recycling has been handled so directly, with a keen eye to economy and mechanics, in the way that all good sheds do. Most importantly, it responds to its place in a highly water- and energy-efficient way, just like a Coolgardie. At a time when the planet is heating and we are all being asked to do our bit to draw off a bit of steam, this building repays serious study. 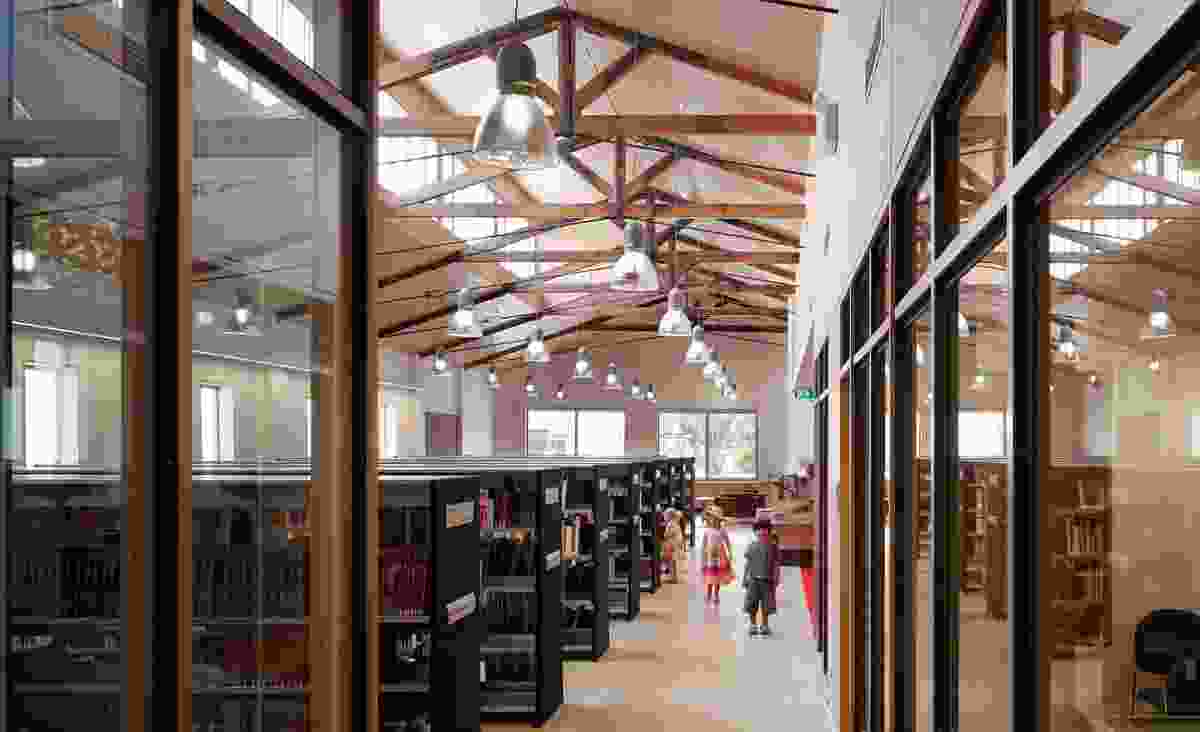 The west elevation on Lorne Street, the main street of Junee. 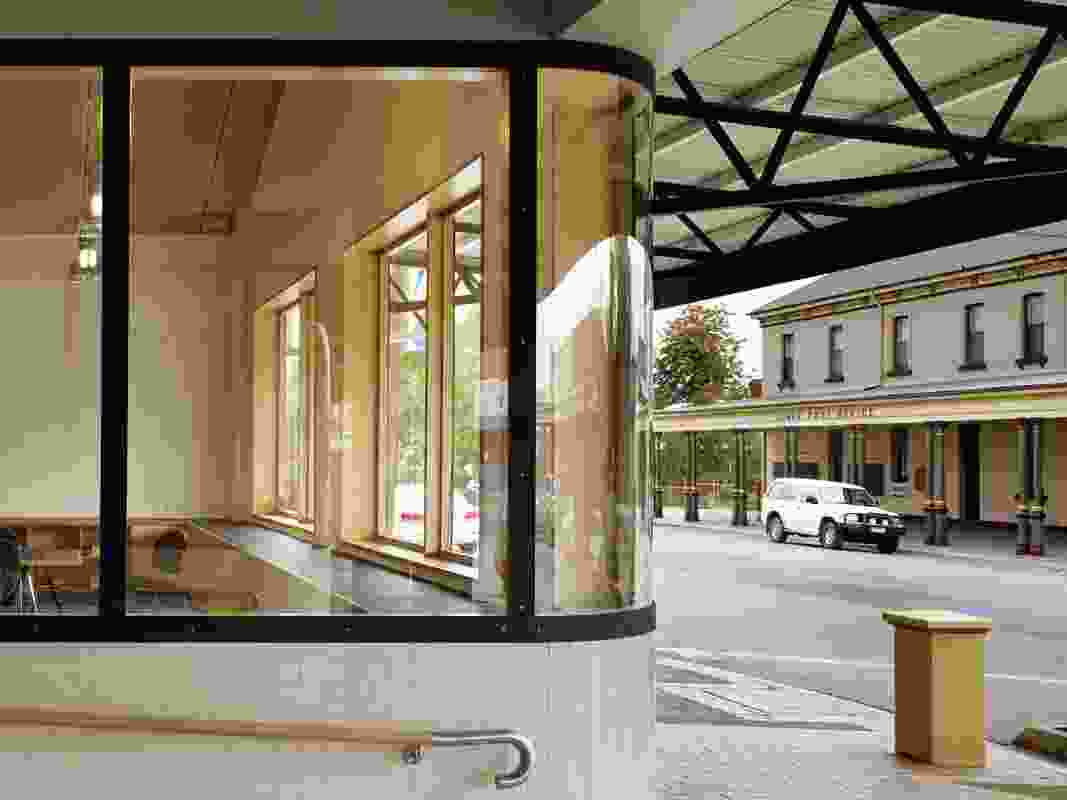 The curved glass opening next to the entry on Lorne Street. 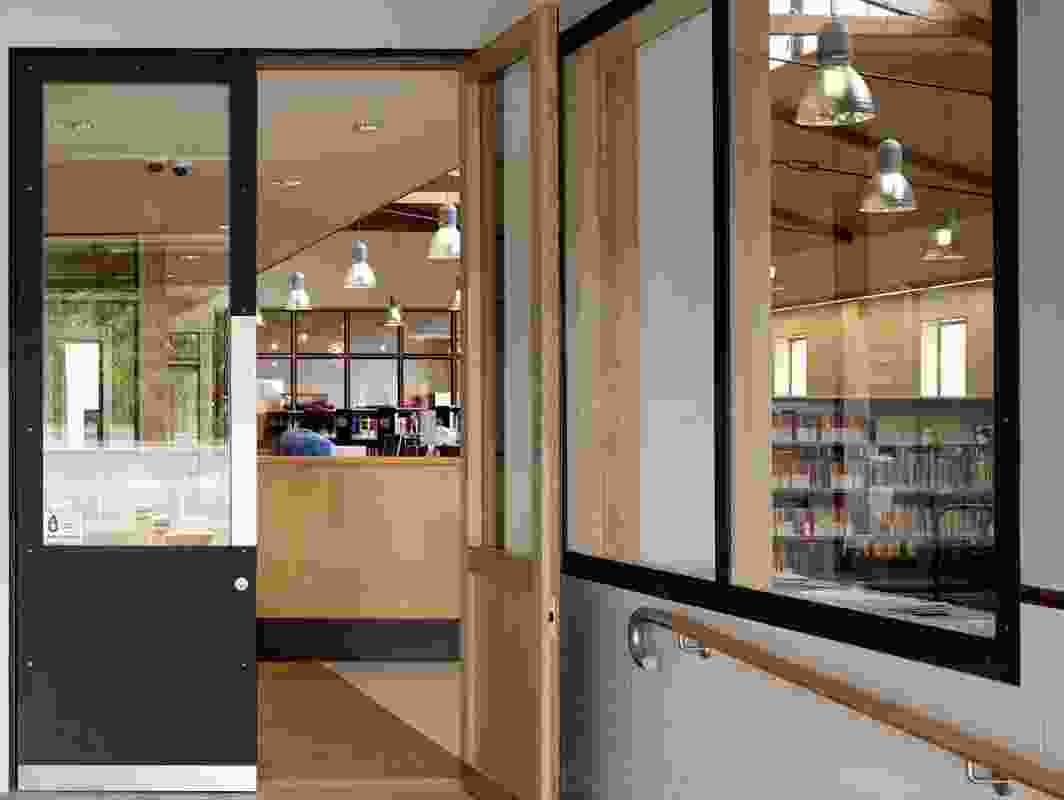 Looking through the door at the top of the entry ramp. 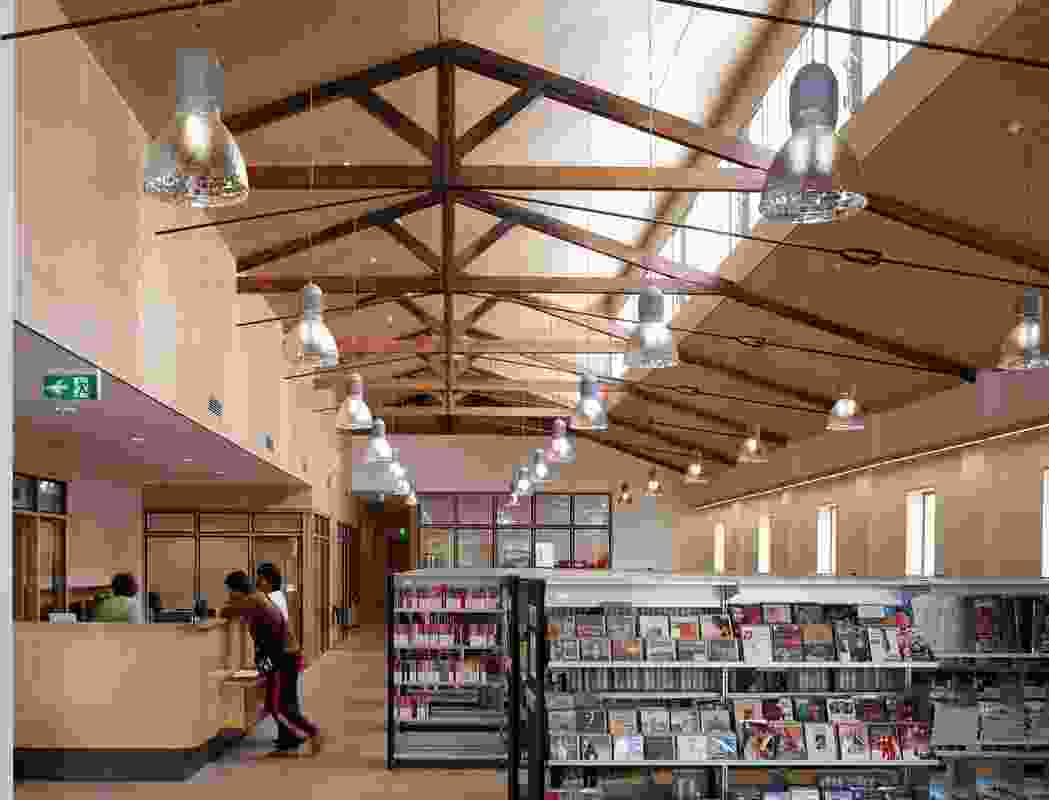 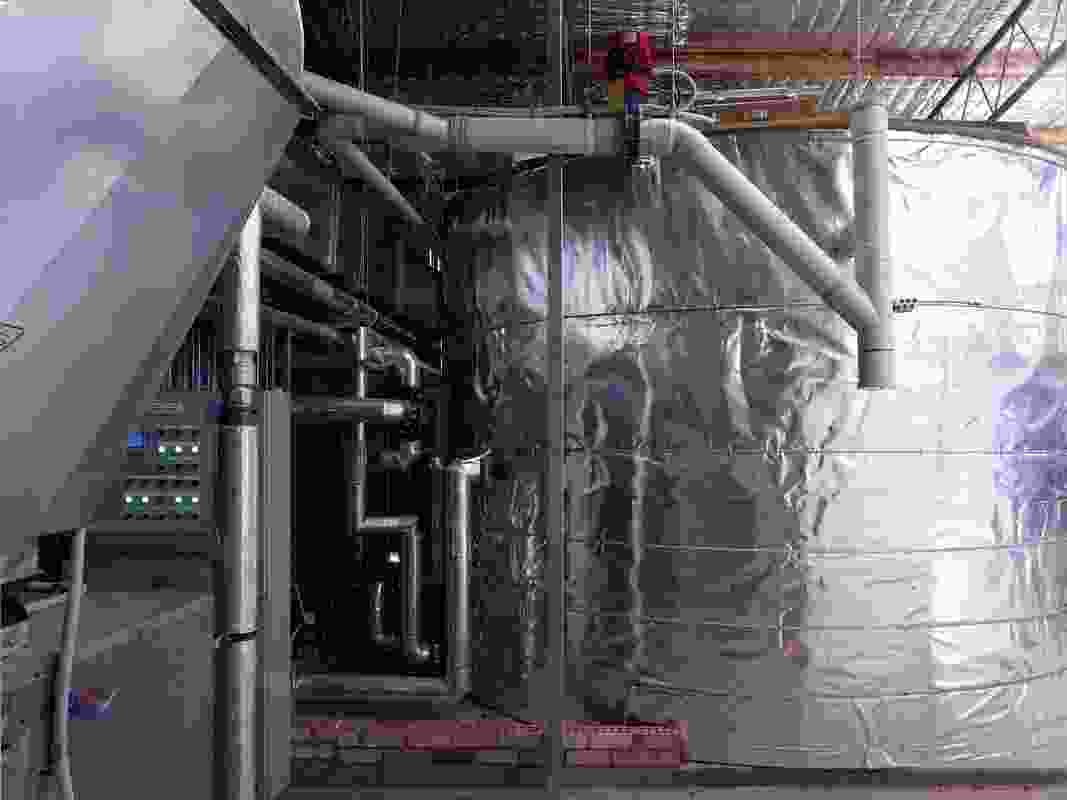 “Soooo … it’s like a Coolgardie?” The insulated tank central to the natural cooling system. 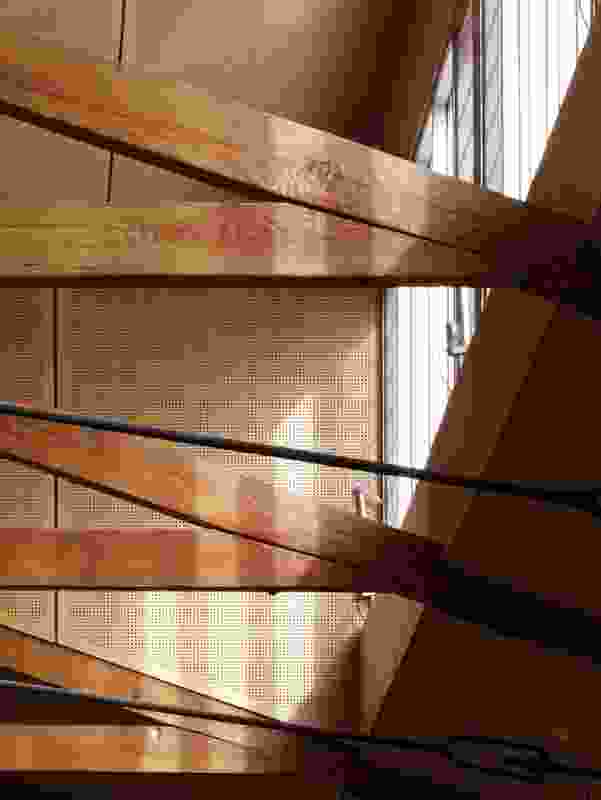 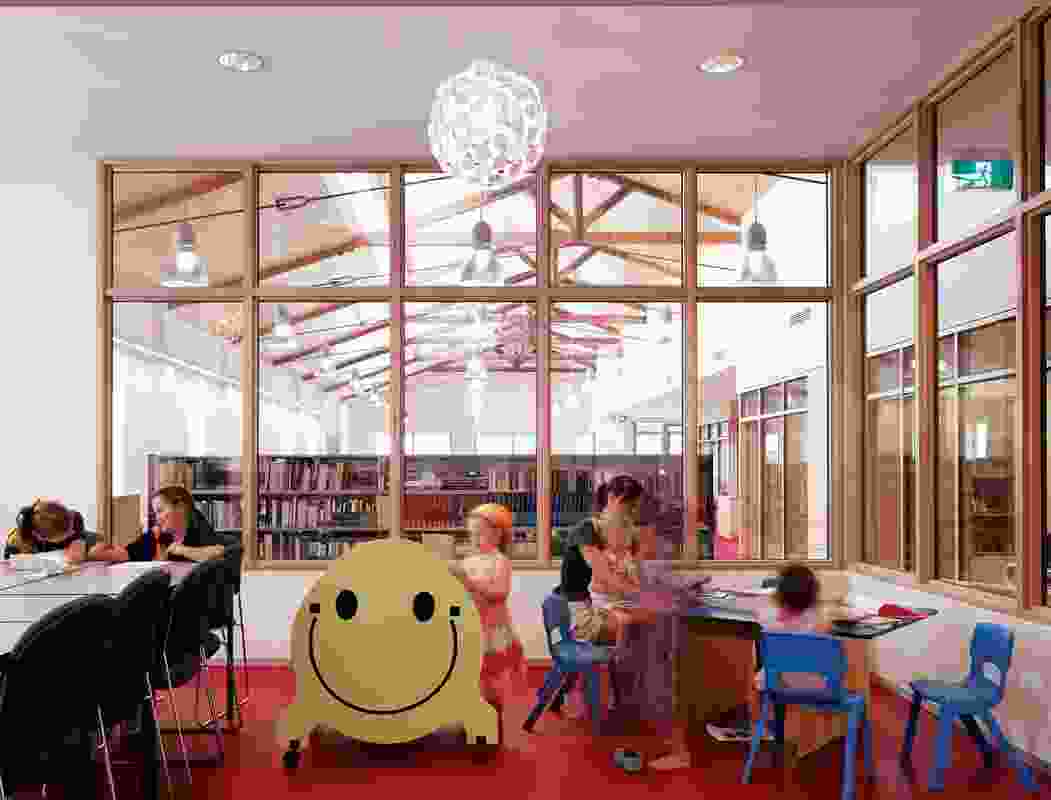 The children’s area, between the main collection and the plant room. 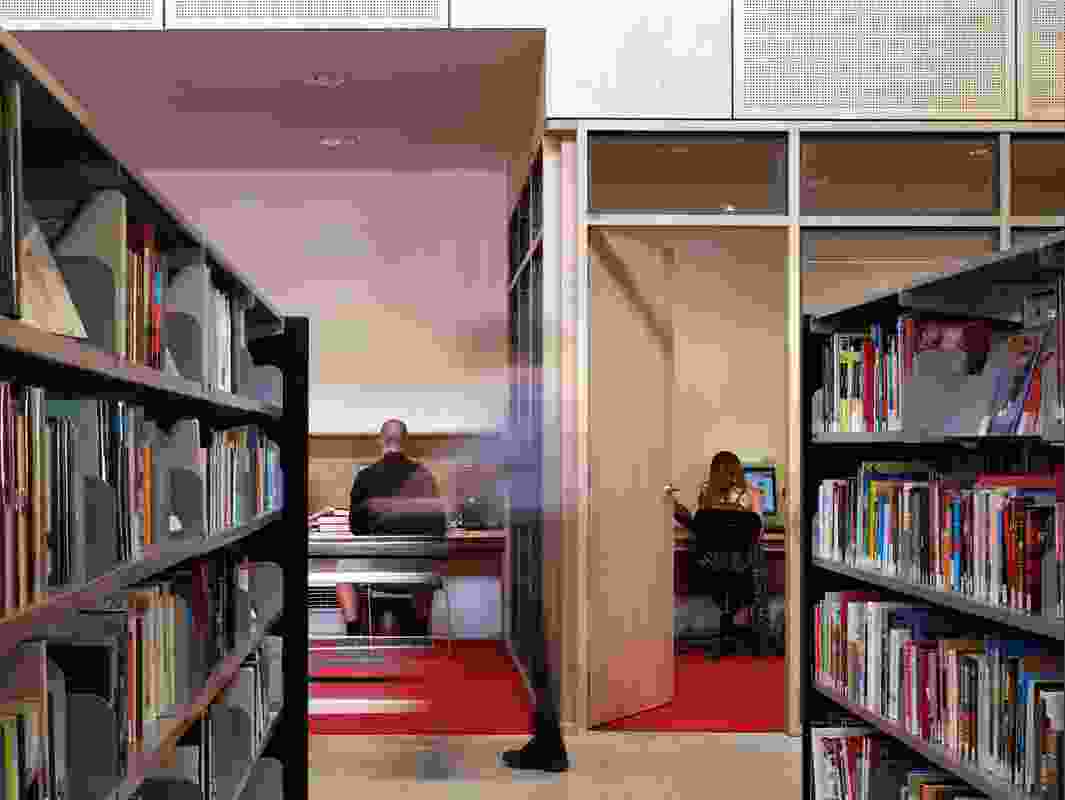 A computer area and an AV room open onto the main collection. 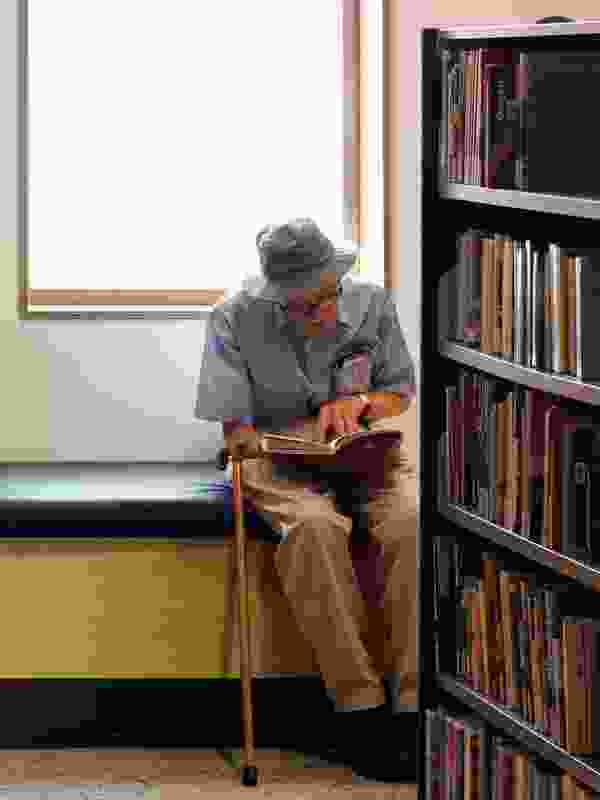