What do you do as a nation when you have become incredibly wealthy, yet can see a time coming when the rivers of gold will run dry? You plan for your future. That’s what they’re doing in the United Arab Emirates, most famously in Dubai, a city stridently setting the pace of reinvention.

Dubai has sought to redefine itself as a global tourist destination and international business hub, and littered itself with every conceivable type of public entertainment from theme parks and water slides to museums and art galleries, backing it all with free trade and a low tax regime, but it does beg the question: “just because you can, should you?”

Coming from a city like Sydney, composed mainly of background buildings along gridded streets, with only rare standouts (such as Utzon’s Opera House), Dubai can be a sensory overload. Dubai is not about background. Not for these once nomadic tribespeople. Not anymore. It’s all about foreground, and lots of it. Everything is built to attract the world’s attention, and in an ever-expanding metropolis, the job of differentiating one building from the next becomes an ever more difficult task.

The Burj Al Arab is a classic case in point. Dubbed the world’s first six star hotel (whatever that means) and sees its own significance as such that it has carved it’s own site out of the ocean and sits apart from anything else.

The surrounding land becomes a viewing platform for taking in the building’s vista. Burj Al Arab is an iconic, almost diagrammatic form, standing sentinel to welcome the world to Dubai’s fantastical shores. Anchored by a 180-metre central void that sits above the entry, retrofitted in garish colours so bawdy they ooze the old-world opulence of Moulin Rouge in a stunning contemporary building. It’s odd, but compelling.

Of course there’s more. The crescendo of Al Arab is its horizontally cantilevered restaurant, as close to 300 metres above sea level as one cares to get, with a spectacular view unencumbered by anything, not even its own structure. This is the counter-weight to a perched helipad, the scene of outrageous golf and tennis advertisements by super stars and seen the world over.

How can one top this? They do, because they can. The Burj Khalifa is 817 metres of world record shining monument to the cause. Yet this building, through necessity, is immediately more rigorous than most loitering Dubai eighty-storey skyscrapers, simply because physics demands it. When you build higher than anyone has ever built before, you challenge every conceivable parameter, every constraint just to make it stand up. Add to that a hot and harsh sea and desert environment, and you have a well resolved tower: the Empire State Building of its time – so tall it begins to lose scale. Yet it is your constant orientation point, no matter where you are.

Abu Dhabi, by contrast, is more sober, and not just physically. Buildings here seem to have some ordered street grid about them, even some proper streets. The wealthiest of the five Emirates, Abu Dhabi appears in no rush to reconstruct a new reality and is setting its own pace – frantic as opposed to manic. The city also seems more self-assured (relatively), but it too is focused on foreground and “bigness”.

Besides the Burj Khalifa, the most impressive buildings from this stage of the tour, and certainly the ones with the most architectural merit, are in Abu Dhabi. The Sheik’s Grand Mosque is beautifully done in white marble; a glistening white jewel for Islam. Its presence is on par with St Peter’s Cathedral and its monumentality doesn’t simply imply a higher power – it displays it.

A vast inlaid marble courtyard has been built to house the 20,000 worshippers who spill from the Grand Mosque, surrounded by what appears room for another 10,000 in the ornately decorated colonnades. Grand buildings on this scale requires grand gestures, like the 120 Iranian women employed for two years to weave the rug for prayers in one single piece. The mosque certainly has gravitas.

High architecture was proving elusive until we visited Foster’s Souk Central Markets, located beside a series of undulating and scalloped-skinned glass towers, all over seventy-storeys high.

The markets gave the first glimpse of a vernacular architecture for hot, arid coastal climates. The pattern of internal streets created tall, noir spaces four storeys tall, lined with market stalls – double-stacked – affording each shop a three-metre frontage and a mezzanine. A cool breeze drifted through the dimly lit internal spaces, the sun held off and the protected thermal mass kept cool. The centre of each market opens onto a covered square with an opening roof to draw down more light. The materiality and attention to detail is impressive.

The other notable mention, and perhaps my favourite building of the entire tour, was found in Foster’s Masdar City, Abu Dhabi. Not since Le Corbusier dreamed of Utopian modernist cities, drawn and ordered in linear and logical efficiency, has anyone dared to build Utopia again. Masdar City is a self-contained city complete with town, university and residences, but with one exception; it is built atop a twelve-metre, three-storey carpark and basement complex – raising the residents above and beyond the metaphorical ramble.

In Masdar City you are a sophisticate living on an island surrounded by a sea of sand within a completely dislocated built environment. Not heeding warnings from Orwell’s 1984 , or Bladerunner ’s bleak city noir, Masdar City assumes you have no need to think. Once inside the city, driverless cars transport you to where you should go, even if it’s not where you want to go. Foster’s densely packed university housing constructed from an undulating skin of burnt red earth-coloured glass-fibre reinforced concrete is again a reference to the vernacular, and also to the skilled hands of a clever architecture team. It interprets the local custom of screened light with a contemporary brise soleil. 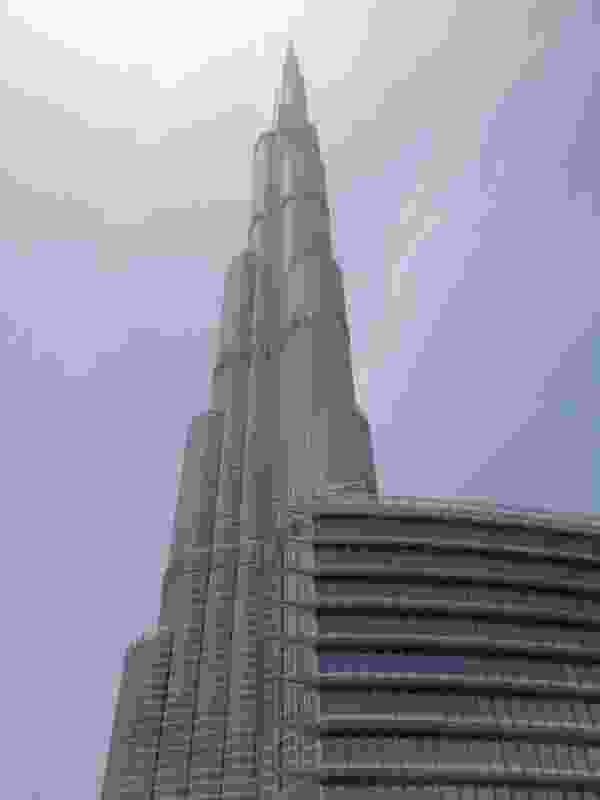 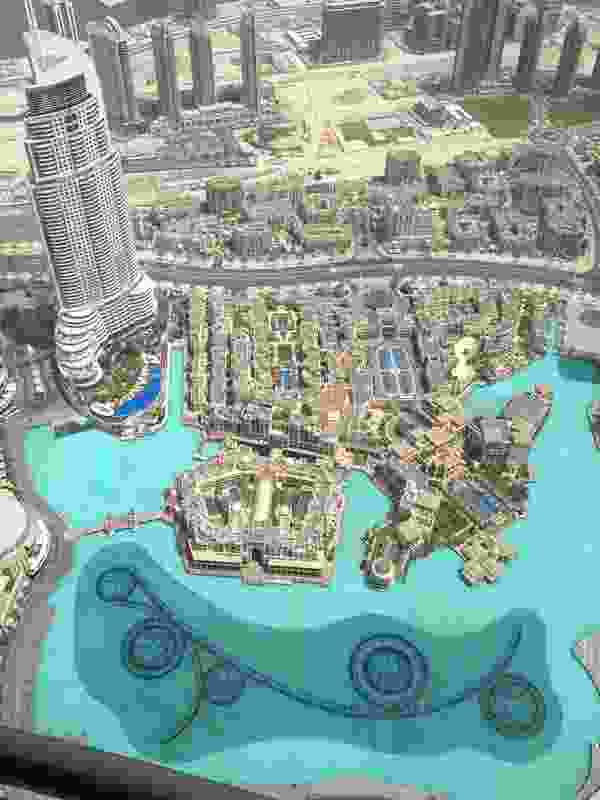 View from the top of the Burj Khalifa, Dubai. 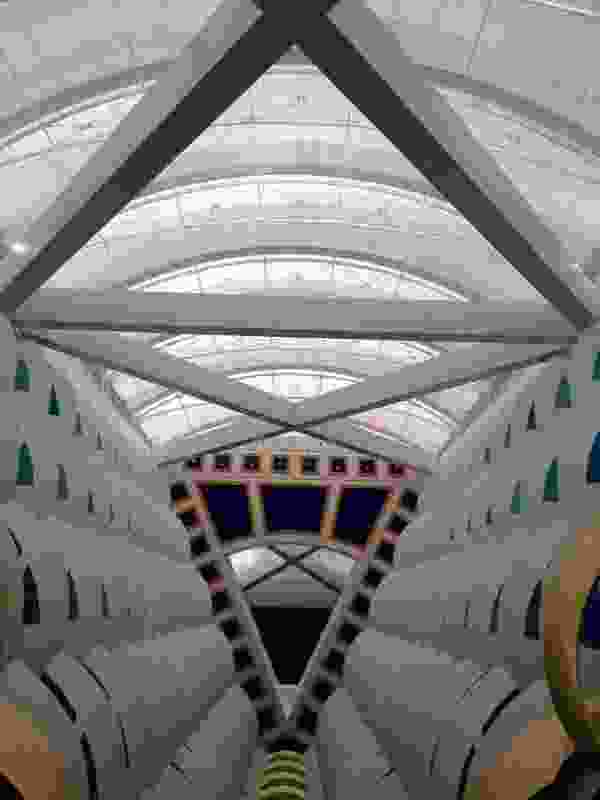 Inside the 180-metre void of Dubai’s Burj Al Arab. 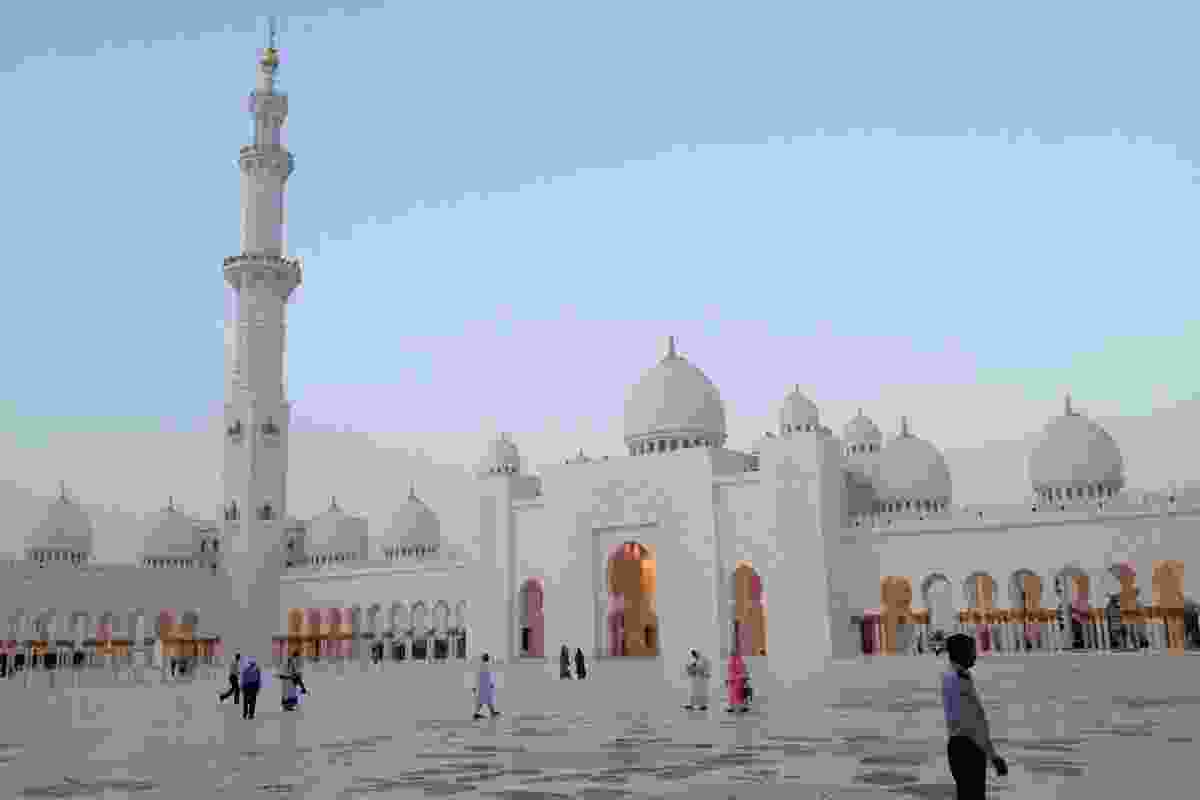 Forecourt of the Grand Mosque in Abu Dhabi. 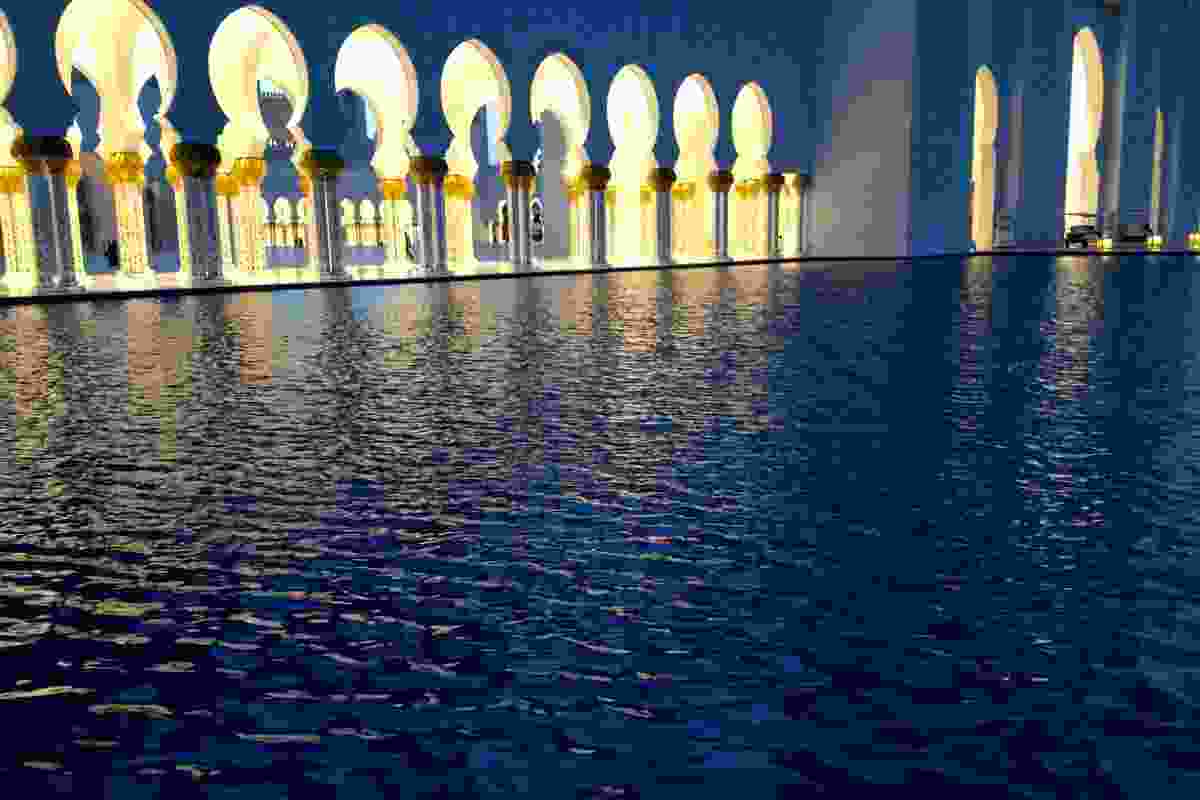 The Grand Mosque in Abu Dhabi. 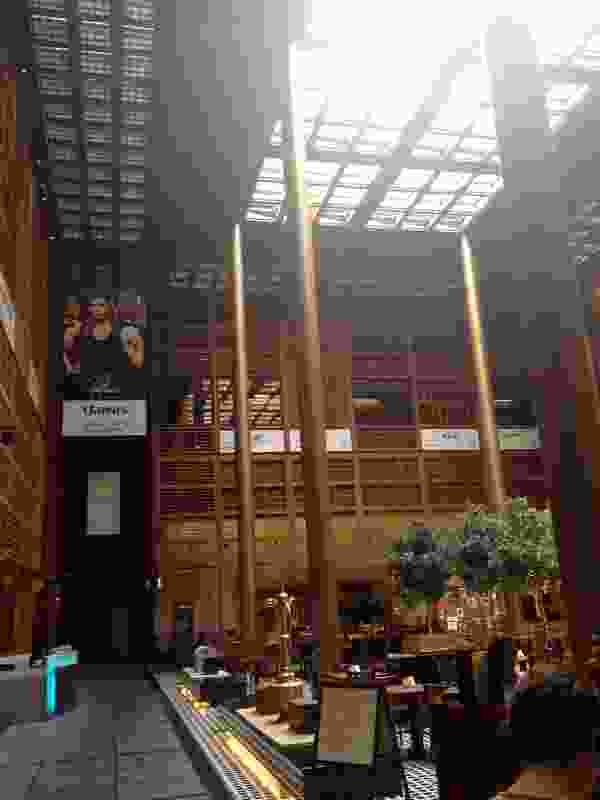 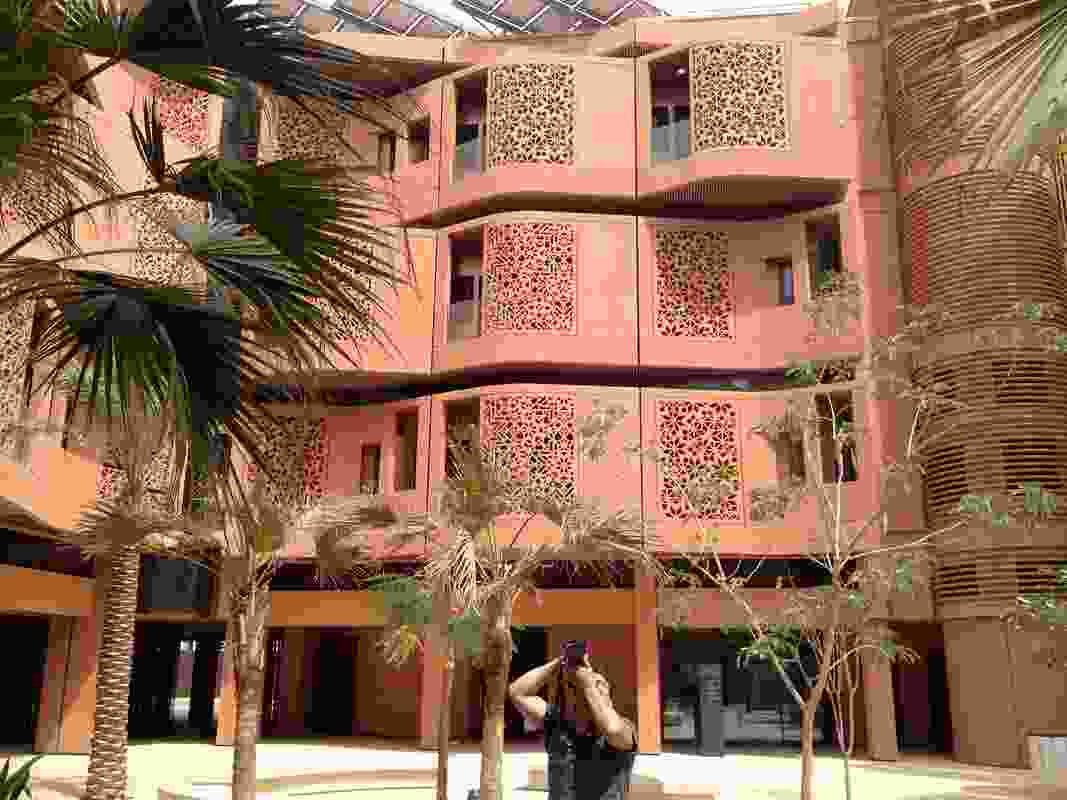 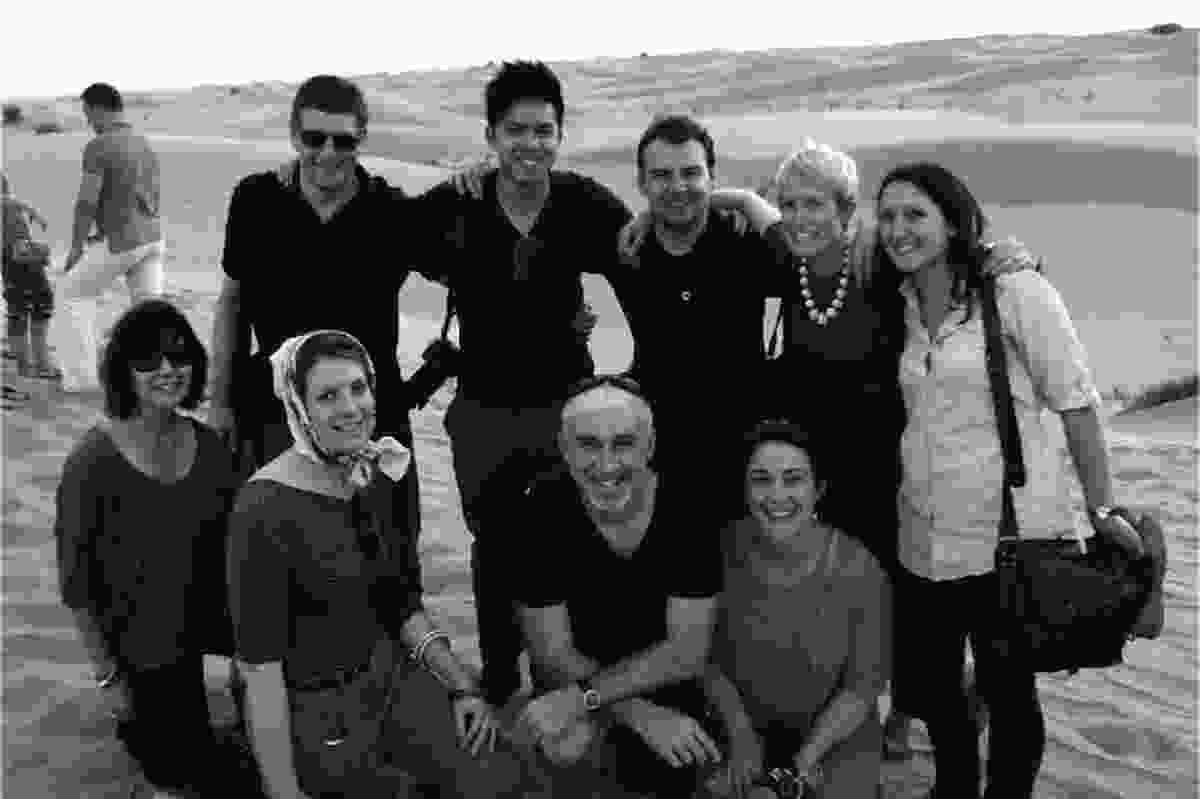