Preserving the qualities of one of the few remaining Queenslanders in a South Brisbane neighbourhood, this addition comprises screened outdoor rooms that mitigate the increasingly built-up surrounds.

A painting studio located in the building undercroft is accessed via a double-height landing that opens to the backyard.

Beyond the museums and galleries of South Bank’s cultural precinct, the inner-city suburb of South Brisbane is an eclectic mix of remnant light-industrial and commercial uses, recent high-density residential development and pockets of traditional detached character housing. While fragments of the suburb’s former character remain, such as the still functioning Pauls Milk and Hanson Concrete factories, apartment towers of questionable quality now proliferate on blocks previously occupied by more diverse uses. At risk too are the remaining pockets of Queenslanders, despite demolition controls that are intended to preserve this housing stock.

It is within this context of fast-paced, high-density development that Nielsen Jenkins has made careful and understated additions and alterations to one of the last remaining Queenslanders in the area for clients Tarragh, Keith and their two teenage sons. Architect Morgan Jenkins points to the overlooking by a sixteen-storey neighbour, and predicted future unit development on adjoining properties to the south, as the impetus behind a design approach that strikes a balance between opening the house up to the benign Brisbane climate, and “defending” its inner workings from the pressures of the urban setting. The result is an architecture that carefully moderates openings to the exterior in a more controlled and less literal manner than we have come to expect from architects working in the Brisbane context. This approach is expressed most clearly in the rear extension. Briefed to design a deck, the architects have instead configured the space as a series of outdoor rooms, or “occupiable landings,” wrapped in a protective timber screen that at once captures select views of the significant fig tree in the backyard and shields the occupants from overlooking neighbours. Despite this carefully controlled privacy, the house is by no means guarded and presents a generous level of transparency to the street. A delightful layering of space is apparent – the front garden and verandah, internal living spaces and the new outdoor room to the rear are all partly visible from the footpath.

A sculptural masonry fireplace sits at the heart of the outdoor room in line with the Queenslander’s central hallway, serving as a focal point to the new extension. Pinwheeling around the fireplace, landings connect the upper level domestic spaces with the rear garden and artist Keith’s painting studio, which is located in the building undercroft. That these landings serve as the primary vertical connection between levels, in lieu of an internal staircase, is testament to the architect’s embrace of informal subtropical living; it also allows for a greater sense of spatial separation between the domestic spaces on the upper level and Keith’s studio and the boys’ bedrooms below. “It’s rare to find a client who is supportive of such unconventional relationships between spaces,” says architect Lachlan Nielsen, speaking of the lack of internal access between levels. The result is a suite of connected but independent work and domestic spaces, which allows the occupants to come together but also find their own territory within the house. The lowest of these landings, for example, aligns with the main bedroom suite, providing privacy to the ensuite at the upper level, while forming a double-height outdoor room, which the painting studio below opens out to. In the event of an exhibition or studio sale, this configuration allows groups to spill outside toward the garden. Public entry to the studio is direct from the street, via the driveway, bypassing the private upper level, while the ground floor bedrooms also retain independent external access from a terrace beneath the front verandah.

Three “streets” demarcate the domestic functions housed within the plan of the original Queenslander: a kitchen and walk-in pantry occupy an enclosed verandah; living and dining spaces are positioned within the central core; and a generously scaled main bedroom suite sits to the western edge of the house. Originally briefing the architects to include a guest bedroom, Keith later suggested that the walk-in robe could expand to the scale of a room that doubles as a private retreat, particularly for Tarragh to escape the occasional noise of family life, and to prepare for work each morning. A palette of unembellished materials, including rough-sawn hardwood framing, raw concrete and masonry, along with the painted timber linings and pine flooring of the existing house, lend the architecture an unpretentious and immediately comfortable sense of space that has become a recognizable quality of Nielsen Jenkins’ work, and which feels appropriate within the eclectic built context.

Negotiating domestic privacy, climatic response and the specificities of family life, K and T’s Place embeds additional value within the existing Queenslander that not only makes for a remarkable house, but also guards against the encroachment of development into pockets of traditional housing stock, where other property owners are often only too willing to allow these houses to degrade to the point where their demolition can be justified. Nielsen Jenkins has ensured that the qualities we admire inner-city Brisbane for will persist on this site, now and into the future.

K & T’s Place is built on the land of the Yugara/ YUgarapul people and Turrbal people.

The co-founders of Nielsen Jenkins and their clients will discussing the making of K & T’s Place at Our Houses in Brisbane on Saturday 14 March. For tickets, click here.

Other
Dining table and side table by Keith Burt 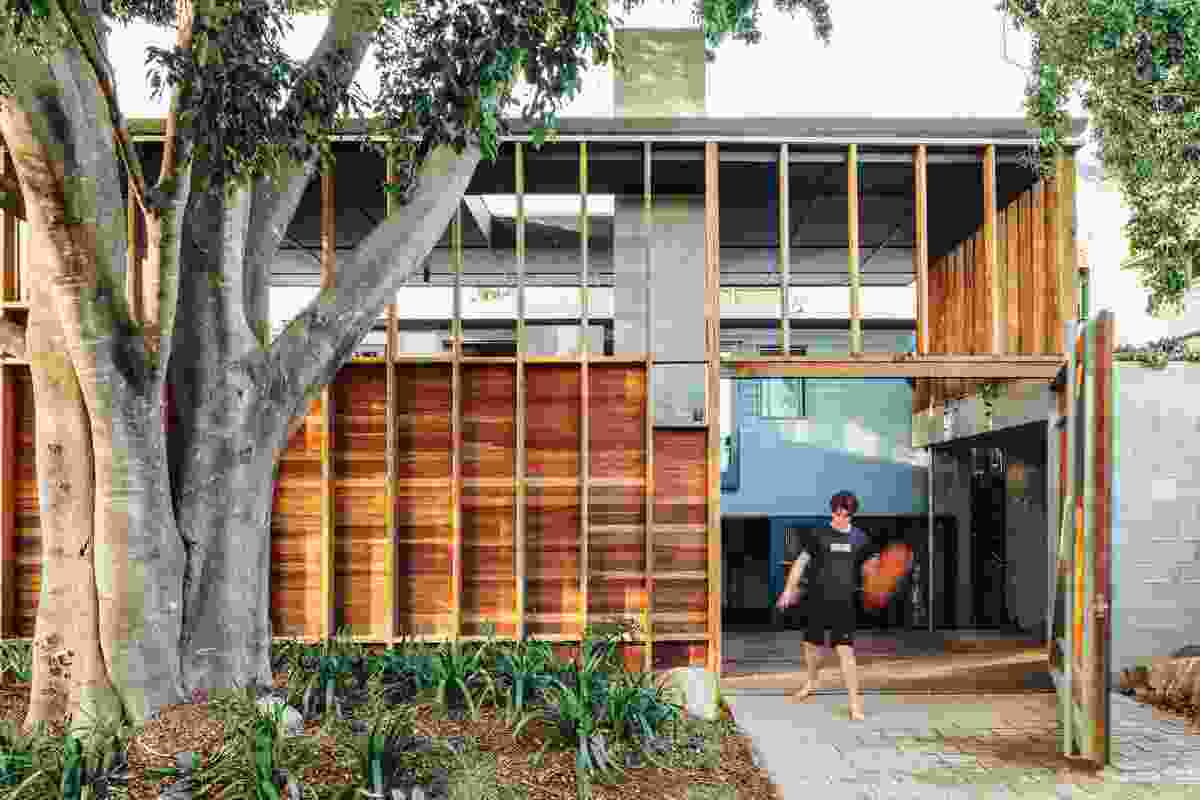 A painting studio located in the building undercroft is accessed via a double-height landing that opens to the backyard. 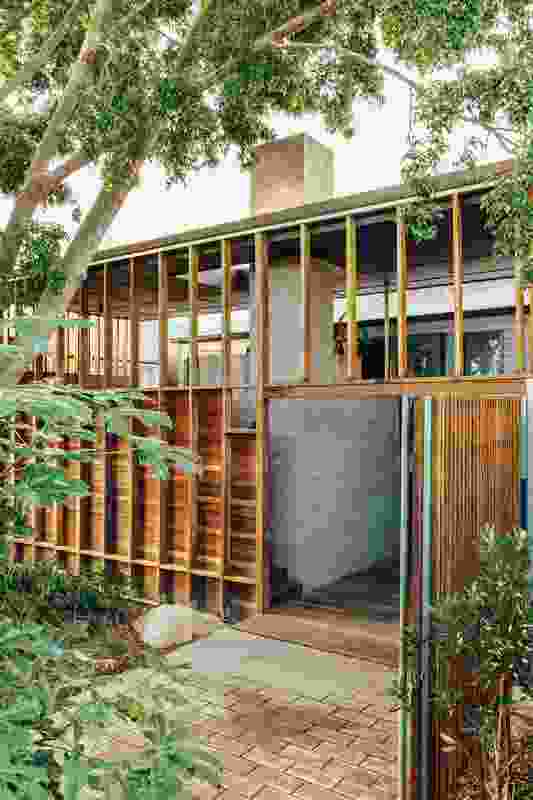 In response to a rapidly densifying context, the addition is strategically positioned to offer privacy to the home. 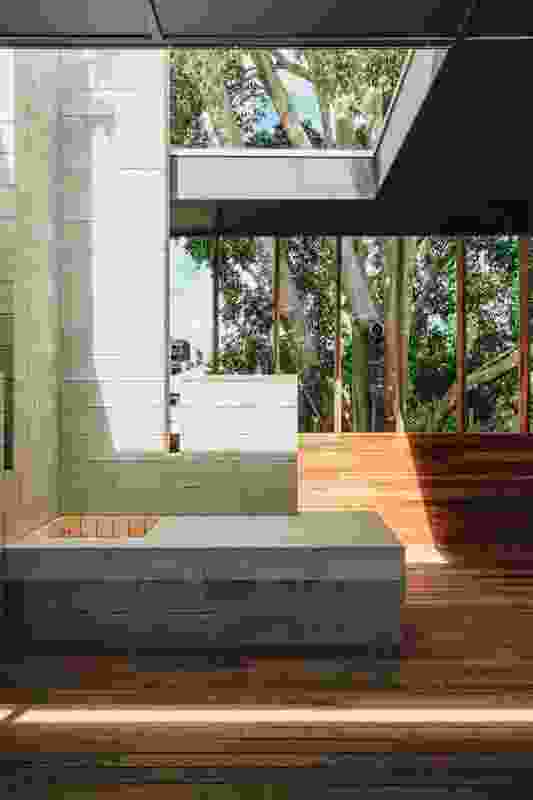 The new outdoor-room and fireplace are enveloped by a timber structure that frames views to the backyard fig tree. 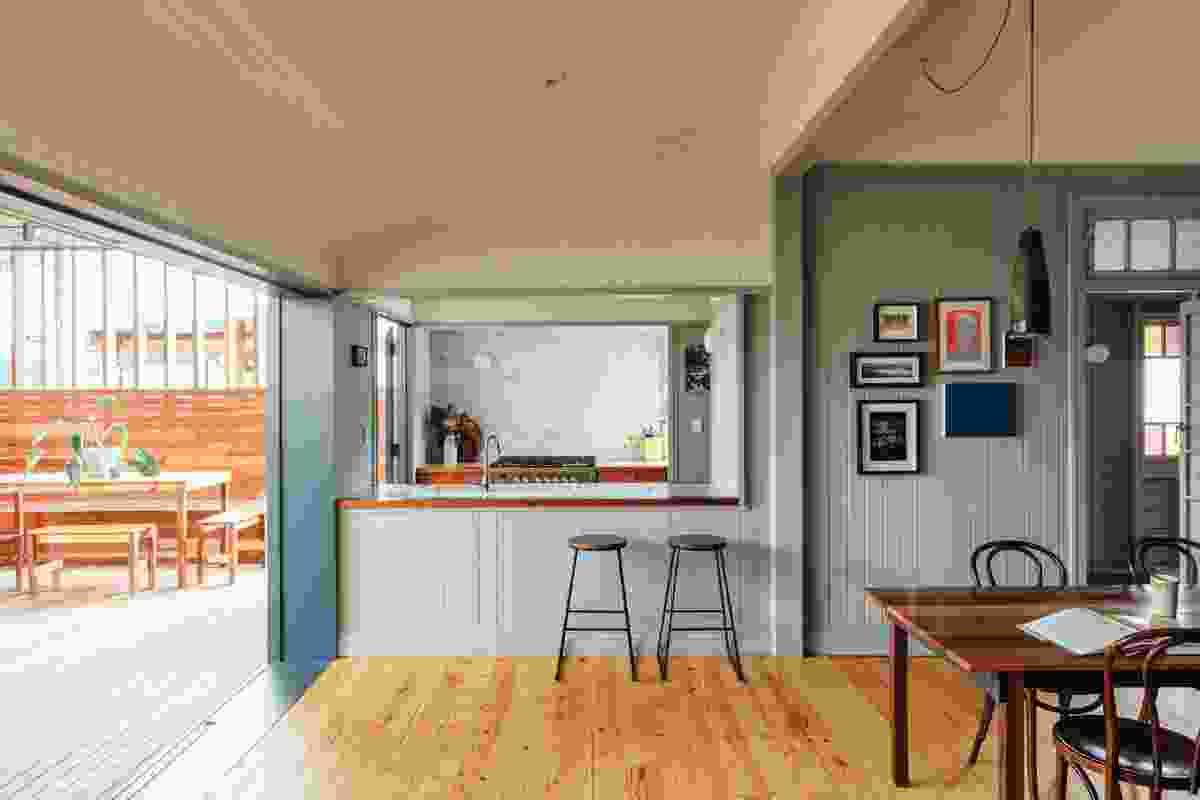 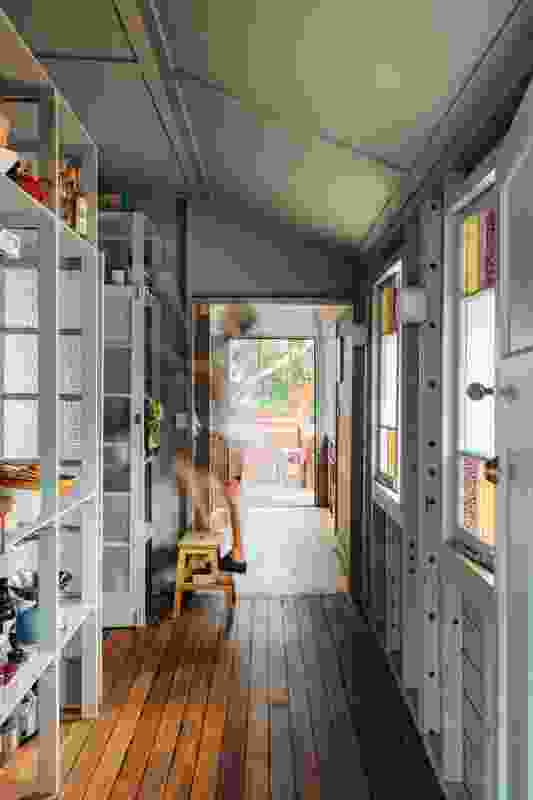 Opening to outdoor spaces at each end, the kitchen and pantry occupy a portion of the original enclosed verandah. 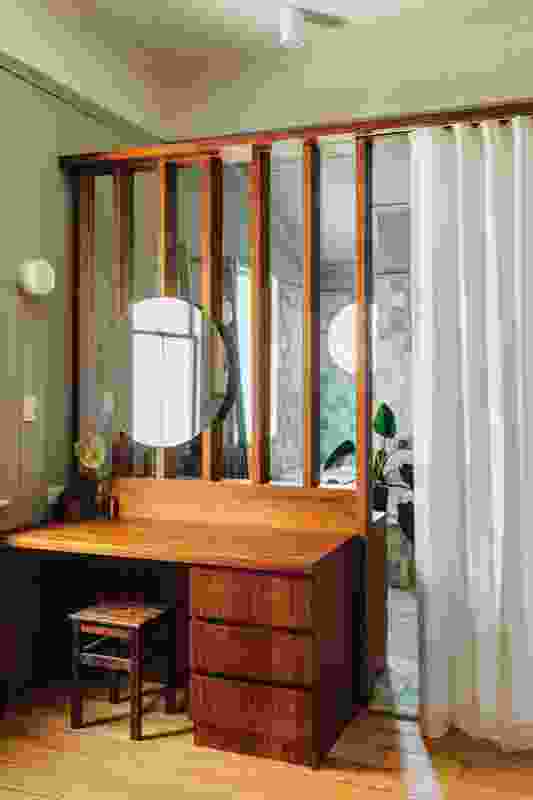 A generously proportioned dressing room is used as a place to quietly prepare for busy workdays. 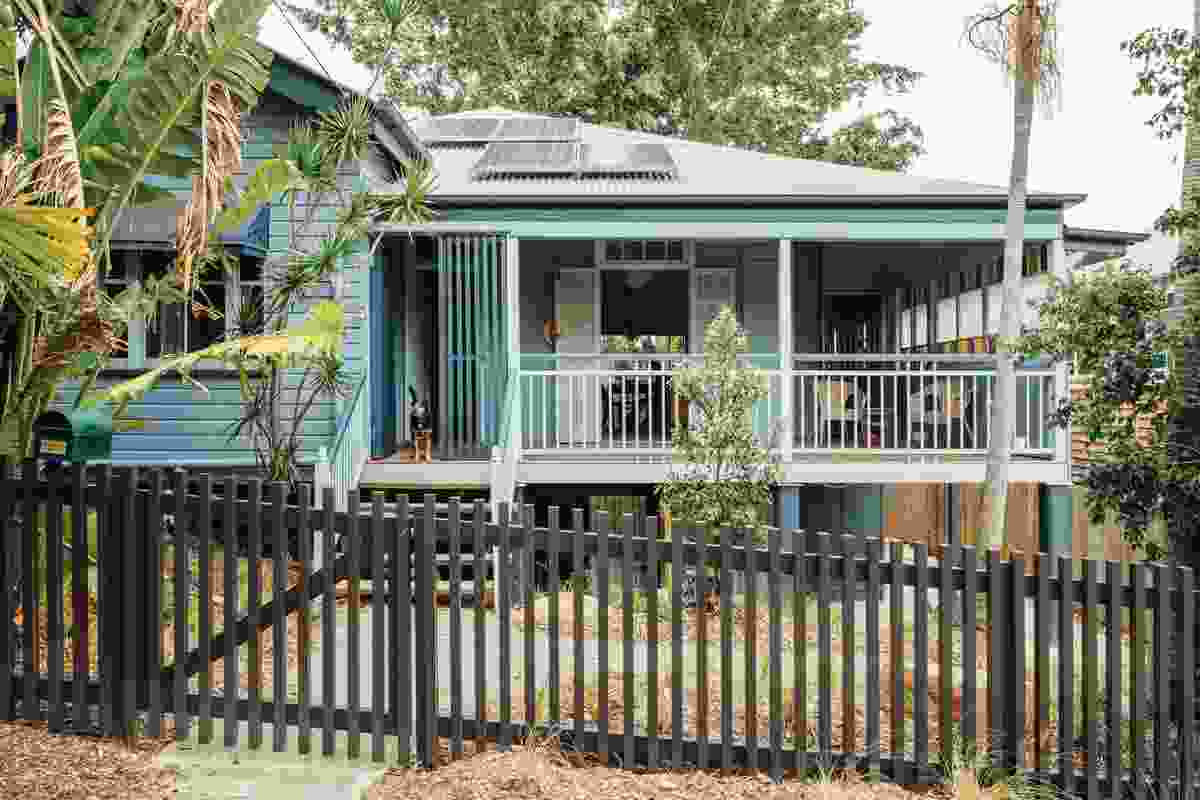 From the footpath, visitors can see past the front garden, verandah and internal living spaces to the new outdoor room.