Located in the Woodlands neighbourhood in the North Region of Singapore, Kampung Admiralty epitomizes the idea of architecture as an agent and an advocate for social and environmental sustainability. On a very public yet modest 0.89-hectare site adjacent to Admiralty train station, Woha’s design is both a community hub and an integrated public housing project. It is an important precedent that showcases the greater civic role and reach of architecture in society. Developed as a prototype to support ageing in place, Singapore’s Housing and Development Board (HDB) plans to replicate the model in other locations to address the country’s ageing population. By placing the elderly centrestage, Kampung Admiralty re-establishes dignity for this commonly marginalized sector and adopts a novel approach for creating stronger communities, particularly in the context of rapid urbanization and densification.

Kampung Admiralty is a fine-grained hybrid building characterized by high programmatic complexity. Strategic layering enables its hierarchical mix of rich, diverse and synergistic functions to mesh effortlessly with each other and the surroundings. The concept manifests in a contemporary kampung (traditionally, a Malay/Indonesian village) and a much-loved destination.

Woha’s subtractive and porous cuboid form within an eleven-storey section draws parallels with a village compound and lends its neighbourhood a new lease of life. The structure is well integrated with the surrounding urban texture, including transport and adjoining public thoroughfares. The building is punctuated by a robust and unconventional arrangement of multi-scalar and stratified, public and private, hard and soft, and communal and green spaces, and a rooftop community farm generating multiple ground planes. They tie together the other “village” components in a vertical arrangement of three distinct layers. The ground-level layer is public and comprises a large hawker centre that overlooks a double-height plaza bound by an eco-pond, shops, food outlets and a pharmacy. The intermediate layer is a two-storey medical centre built around a central “rain garden” courtyard. The top layer comprises a green community plaza with a childcare centre, an active ageing hub, two linked housing blocks of 104 flats for senior citizens (in configurations of thirty-six and forty-five square metres), a rooftop community farm and green terraces. Although these layers are distinct, they are visually connected and softened by the interspersing greenery.

The project aims to support ageing in place through a strong infrastructural framework and rich cross-programming that addresses social, educational, health and wellbeing aspects concurrently. Incorporating amenities that serve both the residents and the local community allows the elderly and their families to come together and a new form of kampung living to be realized. The elderly are encouraged to be independent and active, both physically and socially, with opportunities for intergenerational bonding, leisure and fitness, volunteering and work at their doorstep.

The ground-level plaza is designed as an “urban living room” where the local community can gather in many different ways. Co-locating the childcare centre with the active ageing hub, with both fronting the green community plaza, creates opportunities for children and adults to exercise, play and garden together. Components traditionally found at ground level in HDB precincts – “five foot ways” (covered walkways), “void decks” (sheltered open areas that serve as communal spaces) and “buddy benches” (strategically placed seats designed to encourage residents to sit together) – have been re-created at height to foster social relations in a more tranquil and intimate setting. Inclusivity, user-friendliness and independent living is promoted with thoughtful attention to detail and the use of universal design features in residential units and all public areas.

By adopting a biophilic approach whereby vegetation forms an integral part of the building’s envelope, the architects have mitigated the urban heat island effect, ensuring thermal comfort and buffering noise from the adjacent station. The seamless weaving of undulating greenery across the building’s stepped profile not only gives it a “furry” look, impressively, the total green area exceeds its footprint.

The landscape design by Woha and Ramboll Studio Dreiseitl uses a tiered water-filtration network, with water features at each level. Essentially, it re-creates a tropical rainforest, with effective green and blue infrastructure to manage stormwater run-off, recycle water and restore biodiversity to the site.1 The rooftop community farm and cascading green sky terraces collect and filter rainwater and convey it down to the community plaza and further onto the rain garden, where it is cleaned by natural filters. The water is then stored in a rainwater harvesting tank and used to irrigate the community farm or it overflows to the ground-level eco-pond and eventually enters the drains. Diverse greening also attracts a thriving biodiversity, and creates spatial variety and an overall salutogenic environment. For instance, the two-storey medical centre looks out to the central rain garden, bringing in daylight and offering unimpeded views to therapeutic greenery. The community farm includes more than thirty species of tropical plants that grow fruits, herbs, spices, medicines and vegetables.2

Kampung Admiralty is primarily conceived as a breathable entity, with day-lit and naturally ventilated public areas and housing units; air-conditioning is limited to programs requiring stable comfort conditions. The voluminous, porous yet sheltered public plaza at ground level is designed as an all-weather space. Above it, the cascading form and its enveloping surfaces are kept cool by the layering of transitional spaces, shading devices and greenery. The cruciform plan of the residential towers, with their central cores and breezeways, effectively opens up the units on two sides for natural ventilation and daylight. This is complemented by an expressive facade of single-glazed windows and accessible monsoon windows combined with 750-millimetre-deep precast egg-crate sunshading to filter the strong tropical sunlight.

Beyond the passive strategies, the project incorporates rooftop solar panels and a pneumatic waste-conveyance system, eliminating individual refuse chutes and manual waste collection. With a focus on construction productivity and flexibility, the building uses a nine-metre-by-nine-metre structural grid and pre-cast concrete walls. The residential units are characterized by open-plan, column-free spaces and nominal corridors.

Encapsulating the values and spirit of a traditional kampung , Kampung Admiralty has been carefully conceived to empower the elderly and the community within a contemporary, humane entity. In its use of cross-programming, Woha has pushed the boundaries to create an inclusive, flexible, well-connected and thriving environment. It embodies symbiotic intersections between nature and culture, and natural and human processes, and is an extraordinary and bold specimen of environmentally and socially sustainable architecture. Although modest in scale, its potential impact is enormous as it demonstrates new ways to improve societal relations, and the health and wellbeing of the rising urban and ageing population the world over.

Kampung Admiralty was awarded World Building of the Year at the 2018 World Architecture Festival Awards. 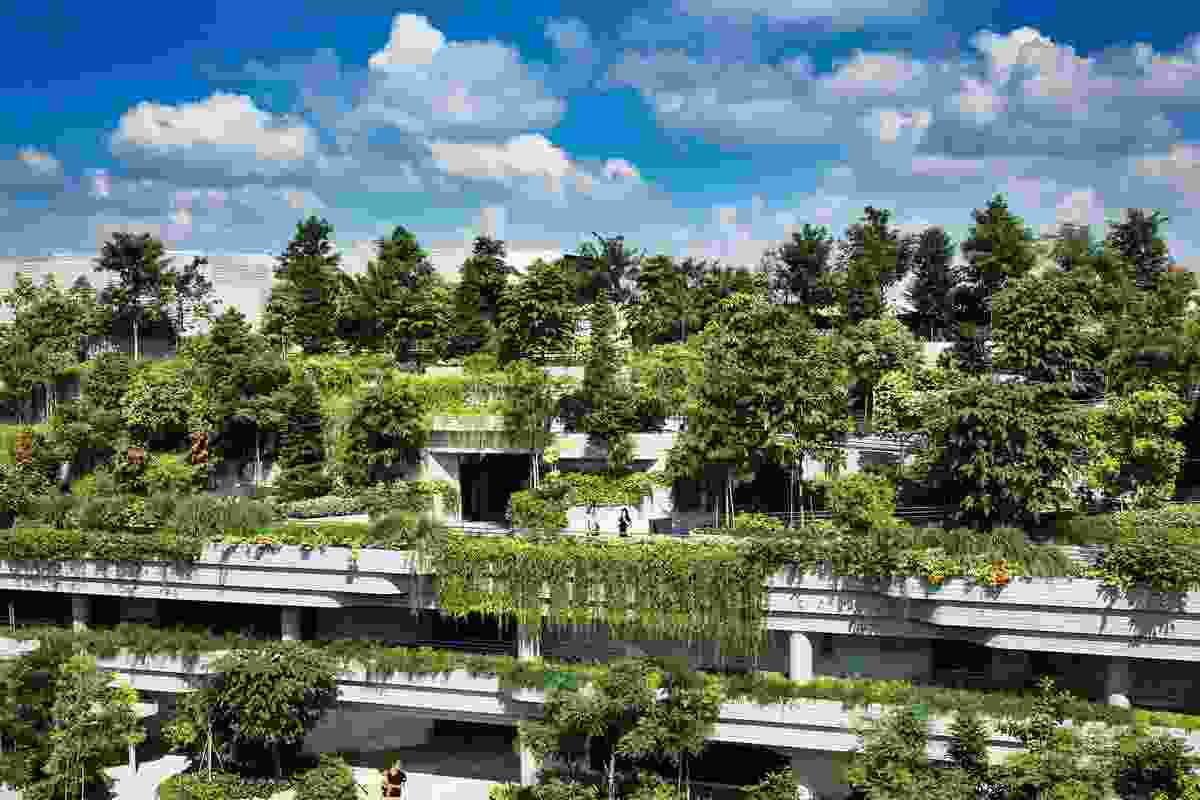 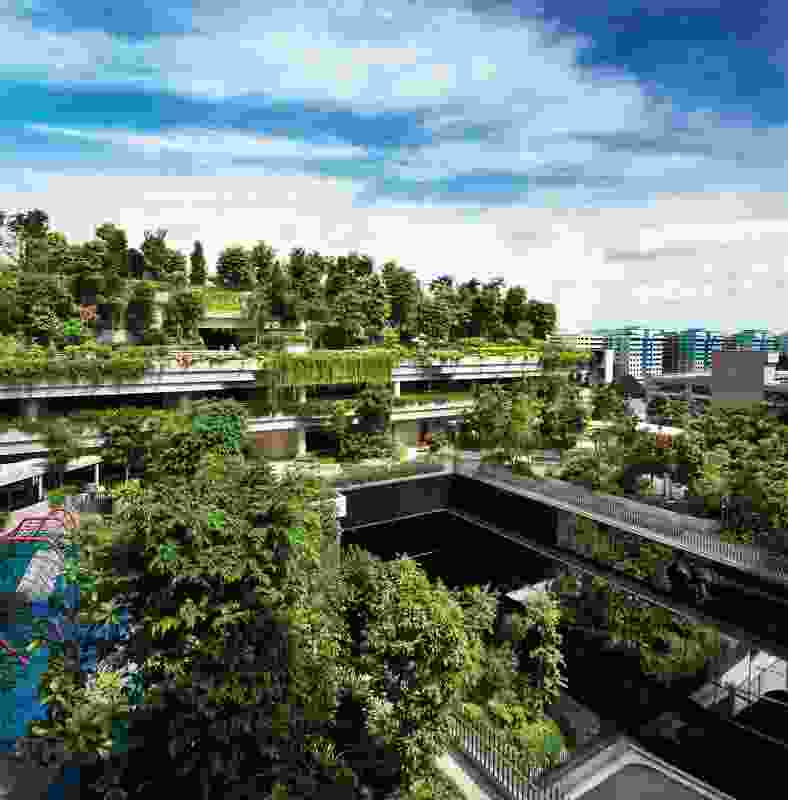 Woha’s Kampung Admiralty incorporates amenities that serve both the residents and the local community. 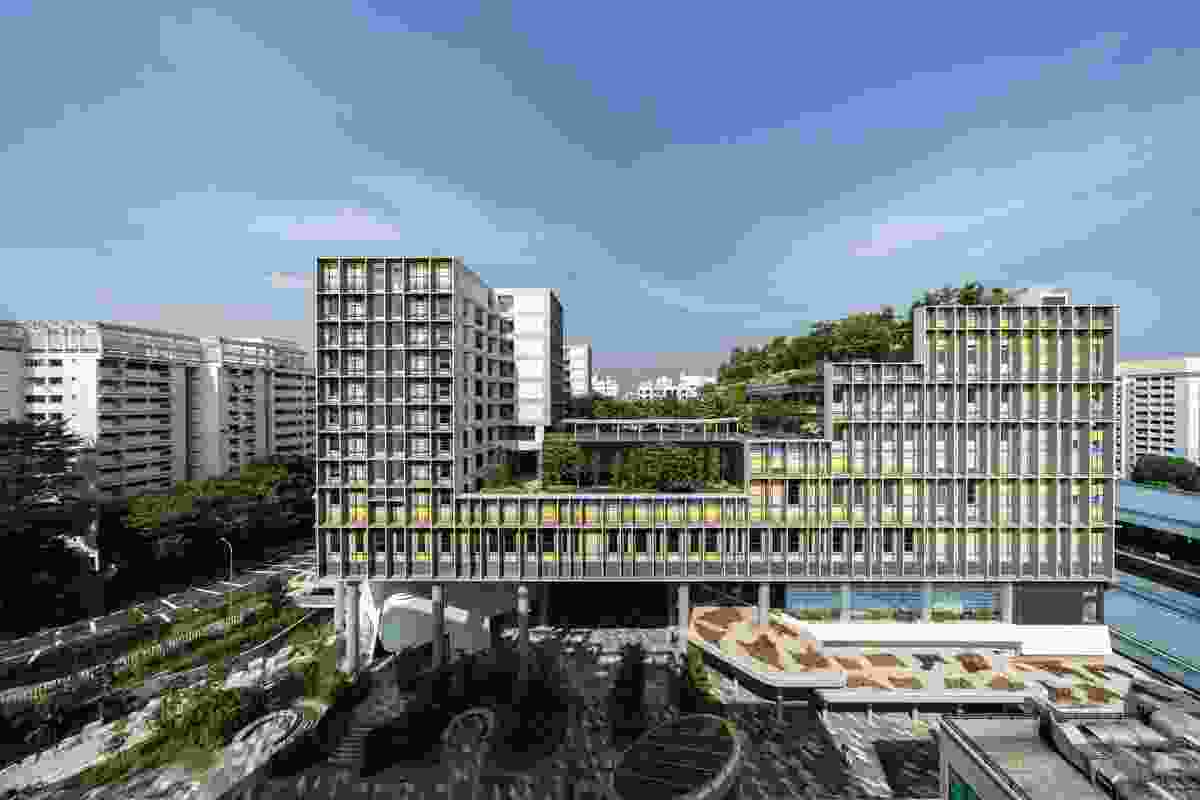 Although relatively modest in scale, the building effectively supports ageing in place and serves as a prototype for future developments. 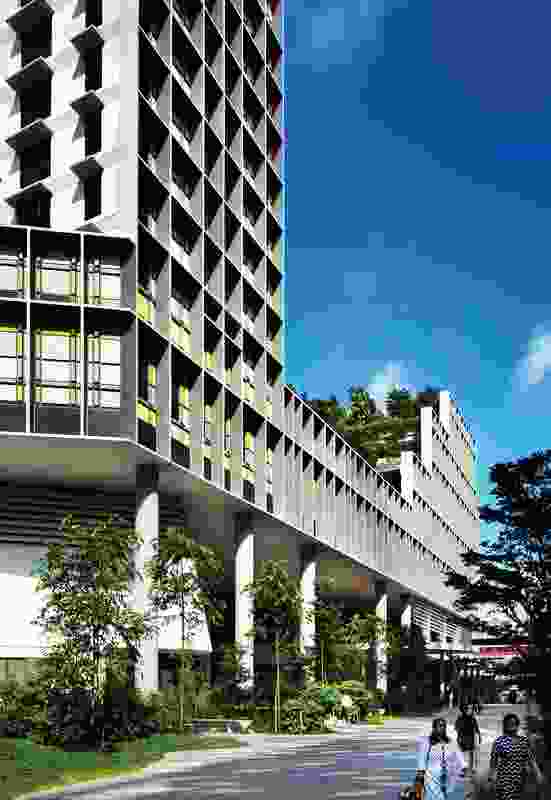 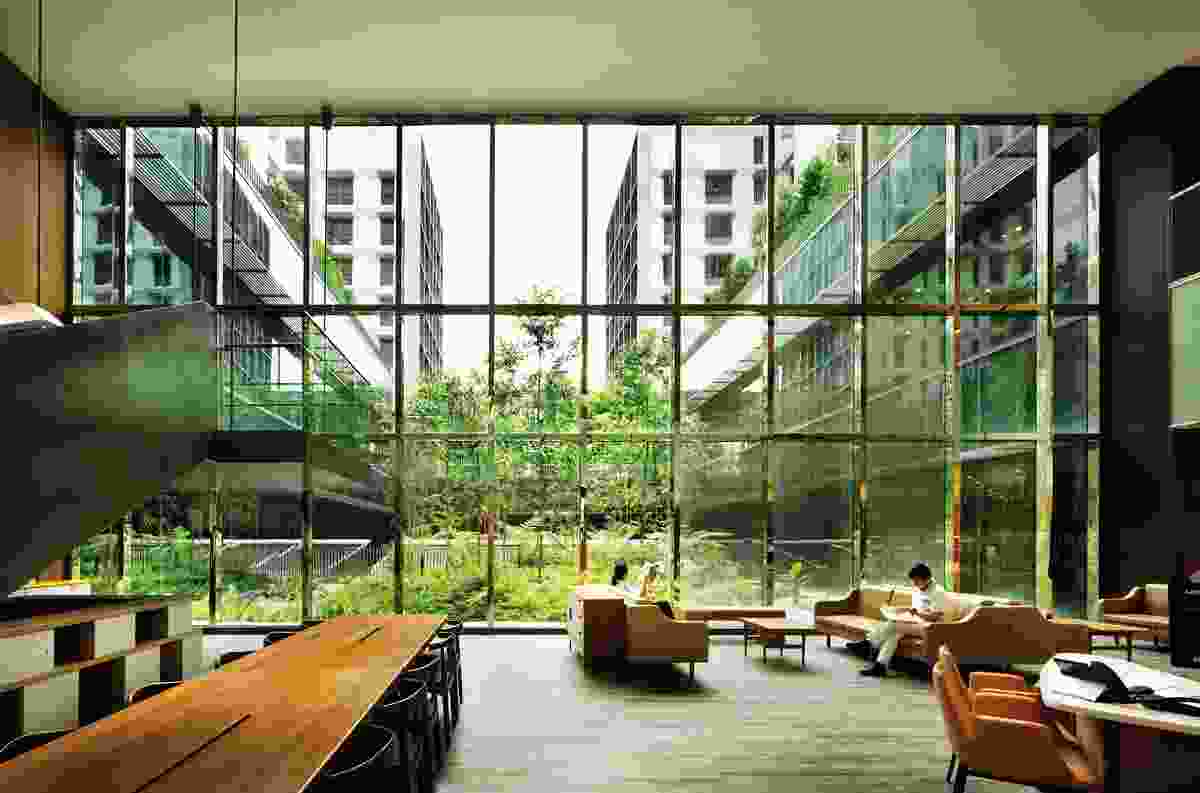 Views out to the central “rain garden” bring in daylight and instil the surrounding spaces with a sense of calm. 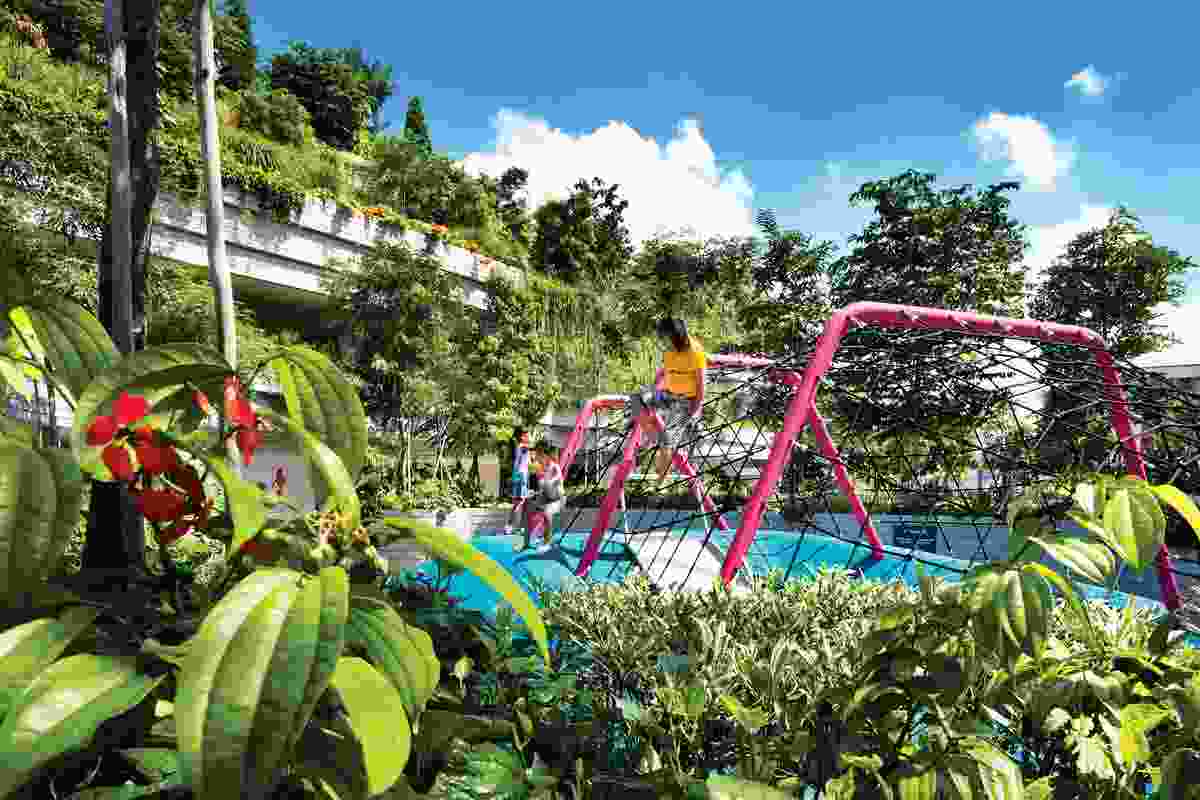 Opportunities for children and adults to exercise, play and garden together make the development a true urban “village.” 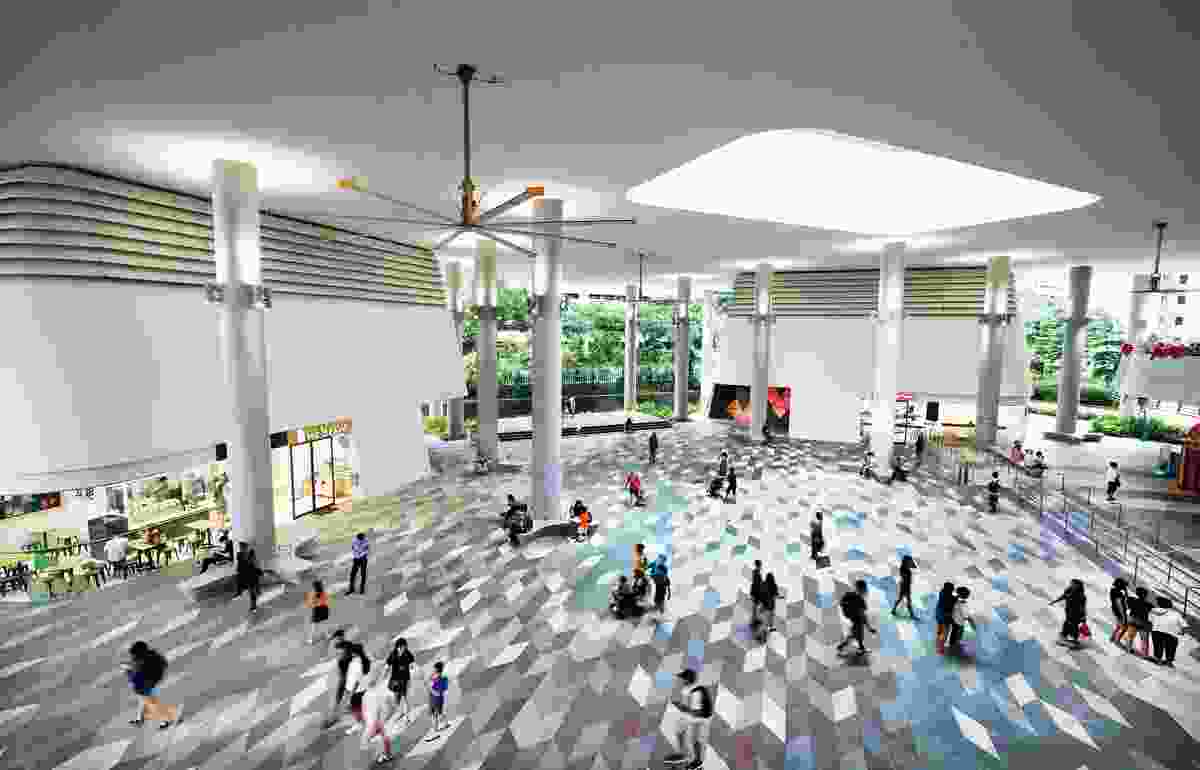 The ground-level plaza acts as an urban living room where the local community can gather.