Expressing a ‘grand collective effort’ in a regional Victorian church

Elizabeth Richardson here examines a northern Victorian church that represents a remarkable period of architectural experimentation in which new materials and formal propositions aligned with the modernization of the church.

The tiny Victorian town of Katamatite sits in the vast flat landscape of the Murray Valley agricultural district, 205 kilometres from Melbourne, forty-three kilometres north of Shepparton and within fifteen kilometres of the New South Wales border. On the edge of town is an extraordinary modern church constructed in 1961 to a design by architectural practice Muir and Shepherd. 1 Arthur R. Shepherd and John Muir met in the 1930s while working in the office of influential modernist architects Stephenson and Turner. In 1947, Muir and Shepherd opened offices in Melbourne and in Ballarat, where Muir was born.2 The firm worked mainly on residential commissions, but in 1953 also designed Victoria’s first purpose-built postwar funeral parlour, now demolished, in Carlisle Street, St Kilda.3 In 1955, the firm’s engagement to design the West Preston Methodist Church, where Muir’s sister was a member of the congregation, led to the design commission for a new church to serve the Katamatite Methodist congregation.4

“If architecture has the capacity to articulate and present meaning and values, then surely our sacred spaces are the most interesting and complex social buildings.”

The Katamatite church is representative of a remarkable period of architectural experimentation during the postwar years, wherein new materials and technologies provided architects with cheaper means and mechanisms of construction. This led to a new range of formal propositions for the construction of religious buildings that broke away from traditional models and allowed religious communities the freedom to communicate their participation in the modern world. Although the marked proliferation of places of worship in the postwar period is widely understood as a consequence of rapid population growth due to immigration and the baby boom, the Katamatite church provides an insight into the reach of the processes of modernization and the widespread desire for contemporary environments.

The collective needs of the Katamatite Methodist congregation were simple and reflected the concerns of a great majority of people living in suburban contexts. Members noted, “we needed a bigger church … [for] we were young marrieds, having children. The church was the only entertainment. We’d had the Depression, the war and we were all married in the 1950s – we needed a Sunday school.”5 Interestingly, it was not only those in the church seeking to re-establish particular ways of living based on the family unit; these aims were also a key ambition of the government’s postwar reconstruction policies,6 further instilling the broader social expectation of continuing a particular social and moral way of life, but within new, modern environments.

At Katamatite, the soaring triangular roof forms of the new church utilized a series of industrially produced prefabricated steel portal A-frames of diminishing height, elegantly pin-jointed to bearing plates bolted onto the concrete slab. These steel frames create the building form and load-bearing structure, which is clad in Lysaght Klip-Lok 26-gauge galvanized steel decking, a relatively new flat-roofing material available from 1959 in fourteen-metre lengths.7 The use of portal frames eliminated interior obstructions, thus creating a single unified volume and inclusive worship space for the congregation and minister, which at the time was responsive to new liturgical ideas prevalent in postwar church designs across all denominations in Australia and overseas.

“[T]he new churches of the postwar period were principally expressions of a grand collective effort, based on a firm belief that the social and moral structures that underpinned society would continue unchanged.”

Within the interior of the Katamatite church natural light is used to striking effect, creating a sense of the sacred nature of the building. Clear glass panels are contained in the upper reaches of the A-frame roof form, at the roof junction above the sanctuary and within the front facade above the entry porch. Flanking the nave and rising toward the sanctuary, a section of dappled glass panes creates a translucent glow above the low Mount Gambier limestone walls, which are non load-bearing and double as planter boxes. The central (and only) focus of the interior is the cross above the altar table, illuminated by a triangle of concealed fluorescent light tubes.8 The colour and material palette is limited: black and grey vinyl tiles on a concrete floor, white ceiling tiles and exposed portal frames painted black. Enlivening the whole space is the sky-blue colour of the sanctuary wall. Small details soften the angular nature of the building: the gentle curve of the entry porch wall and timber soffit, the angle of the clear glass panes, the curve of the pendulum light fittings and the presence of plants.

Muir and Shepherd’s use of new materials and techniques to create a non-traditional expressive building form, with a simple and austere aesthetic and fresh approach to the control of light, typifies the characteristics of the best postwar church designs in Australia. The striking appearance of the building, purportedly based on the depiction of hands held in prayer in the well-known 1508 drawing by German artist Albrecht Dürer, is said to have been a result of the architect’s suggestion. However, the form of the Katamatite church could equally be, and perhaps is more likely to have been, inspired by the thin concrete shell forms of the highly publicized Sydney Opera House by Jørn Utzon, models of which appeared in Architecture in Australia in 1957.9

Although Muir and Shepherd’s design is manifestly modern, its apparent absence of overt Christian symbolism belies how, through simple means, this building also achieves a theological purpose via the selection of materials and their integral function in the fabric and design of the building. The arresting thirteen-metre-high Oregon hardwood cross of the facade stands both as a physical brace for the building and a potent symbol of the building’s purpose. The “life-size” altar cross has been left in its natural state of rough-hewn timber. The Lysaght Klip-Lok cladding was sprayed with a protective PVC membrane and painted in “Copper Kote”10 to create the impression of a precious material. When completed, the building “shone like the sun coming up,” though the material was designed to mellow and patina with age.11

In Katamatite, as in so many postwar communities, limited economic means necessitated significant voluntary effort in time, labour and money to build the church, culminating in not only the physical structure but also a rich pool of experiences. Indeed, the new churches of the postwar period were principally expressions of a grand collective effort, based on a firm belief that the social and moral structures that underpinned society would continue unchanged. If architecture has the capacity to articulate and present meaning and values,12 then surely our sacred spaces are the most interesting and complex social buildings: full of multivalence and cultural significance. To the postwar Methodist congregation of Katamatite, the process of building a new church was more than simply constructing another building. These devout people set out to represent the spiritual hope they held for generations past, present and future.

– Elizabeth Richardson is a graduate of architecture and doctoral student at the University of Melbourne, researching postwar places of worship and the socio-cultural production of architecture. Between 2010 and 2014, Libby managed the Australian Institute of Architects’ Victorian Architecture Awards program.

Expressing a ‘grand collective effort’ in a regional Victorian church 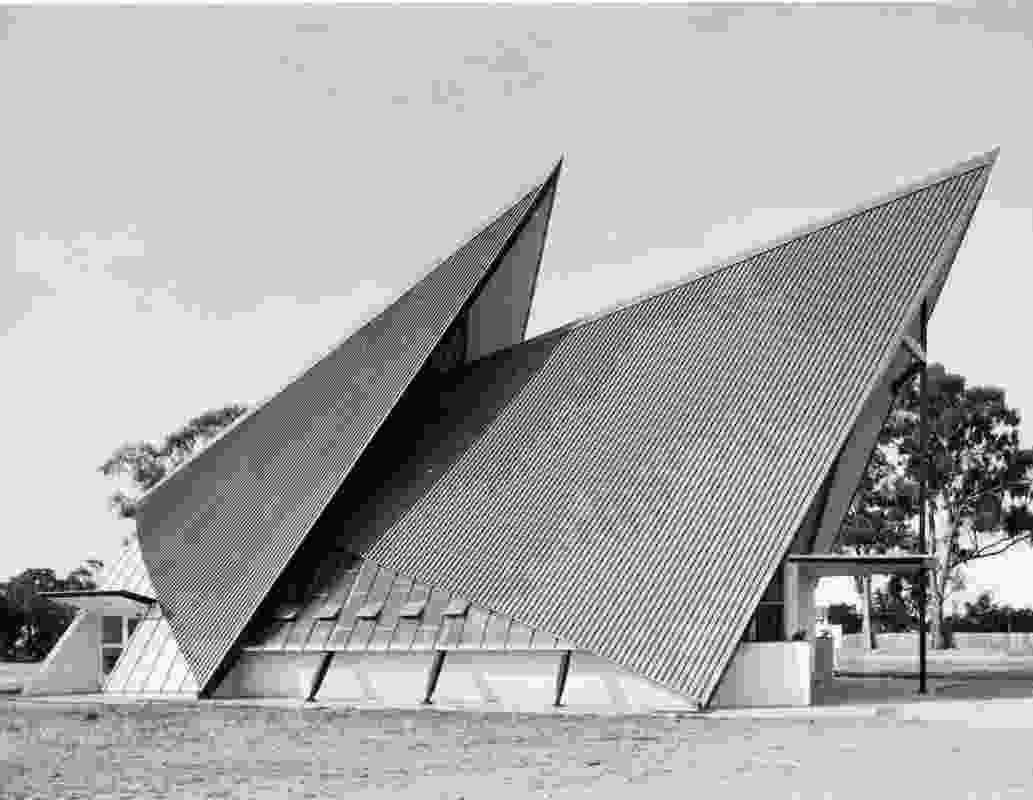 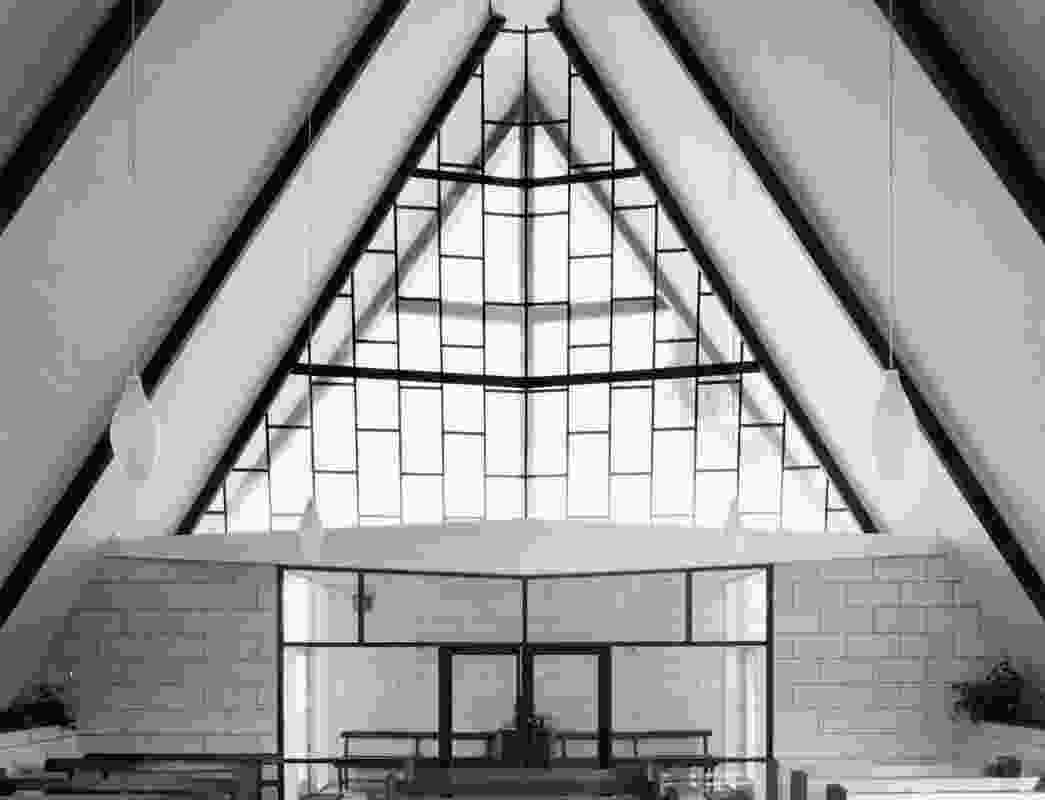 Inside, the absence of interior obstructions allows a unified interior. Clear glass panels in the A-frame roof form admit natural light and create a sense of sacredness. 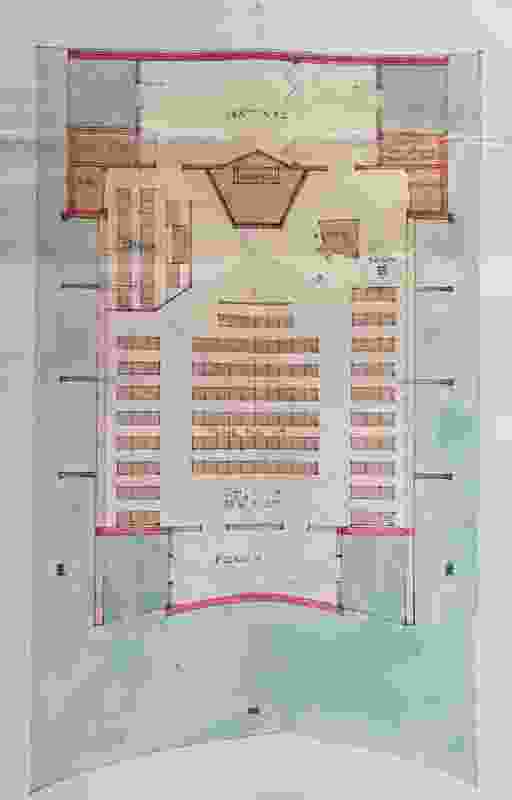