A school in Melbourne readies its students for the world of the virtual, with a firm grasp on the value of the real.

In this simple, orthogonal structure of brick and concrete the method of construction is clearly legible – joins are exposed and materials are expressed.

If the punters are to be believed, we live an age of disruption spurred on by the internet, advances in communications technology and the networked society these phenomena have engendered. In this new, “flat” world, Twitter, Facebook, iPhones and iPads have put paid to hierarchies, institutions and the authorities they represent, be they governments or newspapers, banks or record companies. All of them, so the logic runs, have been roundly skewered on the sharp end of our collective mouse pointer. Imagine, then, attempting to educate and prepare a child for life in this turbulent, virtual world. Where to begin?

Nestled among the leafy, hilly streets of South Yarra, a privileged inner-suburban enclave just up the river from Melbourne’s CBD, the two campuses of the Melbourne Girls Grammar (MGGS) seem a long way from Silicon Valley and the digital age it has brought about. Surrounded by historic, “boom”-era mansions and the art deco apartments that sprung up early last century, this private Anglican school has for 120 years been a popular nurturing ground for the daughters of Melbourne’s professional elite. Despite this long history, though, over much of the past decade it has been reorientating its philosophy and approach.

“We saw an opportunity to reform the journey through Melbourne Girls Grammar,” says Catherine Misson, the school’s principal. “For us, the important question was: ‘Who are the girls of today and tomorrow?”

For the school, this in part meant preparing its students for a world where networked, collaborative working plays an increasingly critical role.

Most attempts to formulate a design response to the new working conditions of the digital age have been unconvincing – with its “chill-out pods,” ping-pong tables, hot-desks and “paperless” offices, the twenty-first-century workplace has become a tragicomic absurdity.

Accompanying the school’s shift in philosophy has been a sustained building program. Its aim was to update the school’s facilities, but the program also presented as an opportunity to rationalize more than a century’s worth of piecemeal growth on very constrained, inner-suburban sites. The school tasked much of this refurbishment, building and masterplanning work to Sally Draper Architects.

The latest completed project in this ongoing program is Morris Hall, the MGGS junior school campus for years prep to four. Located on the corner of Domain Road and Caroline Street, a few blocks away from the main campus, Morris Hall was built in the 1970s in the signature style of the era. Blunt, brown and boxy, we might describe it as “functional,” but for the fact that much of it was anything but – from the effectively decorative sunshades fixed above its windows, to the claustrophobically cellular planning. A portacabin plonked on the site’s corner for extra classroom space served as an additional proletarian flourish. As Sally Draper politely describes, the combined effect was “not really what the school was about.”

MGGS commissioned Sally Draper Architects and DP Toscano Architects to refurbish this building and bring its teaching spaces into line with the school’s desire for a more collaborative learning environment. To describe the end result as a refurbishment, though, would be to understate the transformation. Coming on the heels of 2010’s Wildfell, the building that now forms the heart of the MGGS middle school, and the Merton Hall masterplan (begun in 2004 and completed in 2007), Morris Hall represents the culmination of much of what was learnt in the development of those earlier projects and others on the campus.

“It’s a really beautiful part of Melbourne, but there was no sense of that – you could have been anywhere, just surrounded by red brick buildings,” says Draper of the earlier Merton Hall campus. “Each building had been built with very little regard for the relationship it had to public open space – they were quite inward looking, so one of the main aims was to try and create a degree of transparency and interaction between the buildings.”

While the Morris Hall campus is substantially smaller – in effect a single L-shaped, three-storey building wrapped around a courtyard playground – it faced many of the same challenges as the Merton Hall campus. The “new” building works to address these problems through solutions that are similar to those applied at Merton Hall. Despite the constrained inner-suburban site, all of the major learning areas offer integrated internal and external teaching space, with upper levels boasting expansive, well-shaded decks. Internally, the floor plates have been opened up, with areas for specialist subjects, such as art and science, located in prominent, central positions so that the activities within are clearly visible. In instances where acoustic isolation is required, glazed walls allow for transparency. Instead of single classrooms, up to two classes at a time share open-plan learning spaces. Clustered working areas, meanwhile, have replaced the regimented desks of yore, with zones for screen-based learning located at the peripheries.

While the architects have successfully programmed the campus for collaborative, networked learning, they have also made deft use of light, space and materials to shape and improve upon its qualities as a place.

Draper says of this strategy, “It’s about fostering a sense of enquiry and interest really, by giving visual access to what other people are doing, but sufficient opportunities and structure to allow students to choose their path.” Misson sees this as the “de-privatization of learning.”

The principle of transforming learning into a journey of discovery became a critical component of the building process, too. The school made the decision to retain the bones of the original building for economic and environmental reasons, but also programmatic ones, because it needed the campus to continue to function throughout the build. Construction then occurred in and around classes, but the school treated this as an opportunity for learning and adventure, with the builders asked to introduce polycarbonate “vision” panels into the hoardings. The experience thrilled the students, with the site supervisor becoming a particular favourite (the students eventually organized a special assembly to award him a pink construction hat and “Mike the Builder” doll).

This philosophy gels well with Sally Draper Architects and DP Toscano Architects’ approach, as can be seen in the tectonics of Morris Hall. As Draper points out, it was important to the practice that the method of construction was clearly legible – joins are exposed, materials are expressed and the simple, orthogonal structure of brick and concrete ensures these details were handled well during building. There was no desire for “hero” architecture; rather, the practice wanted to be respectful to the neighbourhood, with the understanding that the building would most likely be there for a long time. In this regard, its western, Caroline Street elevation is a small triumph. A composition of rectangular brick massing inflected with a repetitive crosslet motif (borrowed from the MGGS crest), the elevation is a confident architectural gesture that is nonetheless totally in keeping with its surrounds and the school’s history and identity.

The dawn of the digital era brought with it predictions of dematerialization and decentralization of the workplace that have largely failed to eventuate. Most attempts to formulate a design response to the new working conditions of the digital age have been unconvincing – with its “chill-out pods,” ping-pong tables, hot-desks and “paperless” offices, the twenty-first-century workplace has become a tragicomic absurdity. In this regard, Morris Hall is refreshing. While the architects have successfully programmed the campus for collaborative, networked learning, they have also made deft use of light, space and materials to shape and improve upon its qualities as a place. These might be conventional concerns, but they are no less important for that. As our relentless global march towards urbanization demonstrates, getting our cities and places right for the people they contain – the embodiment of our networked society – is more important now than ever before. 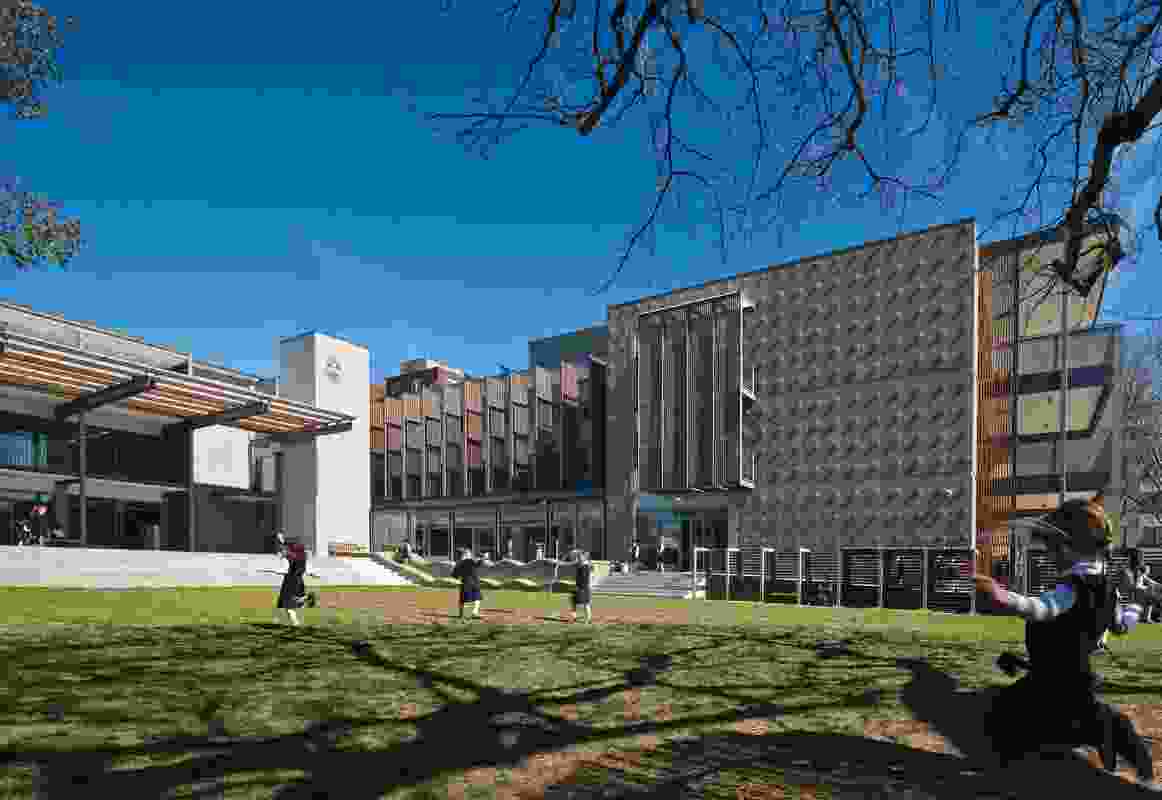 In this simple, orthogonal structure of brick and concrete the method of construction is clearly legible – joins are exposed and materials are expressed.

The Caroline Street elevation is composed of rectangular brick massing inflected with a repetitive crosslet motif borrowed from the MGGS crest. 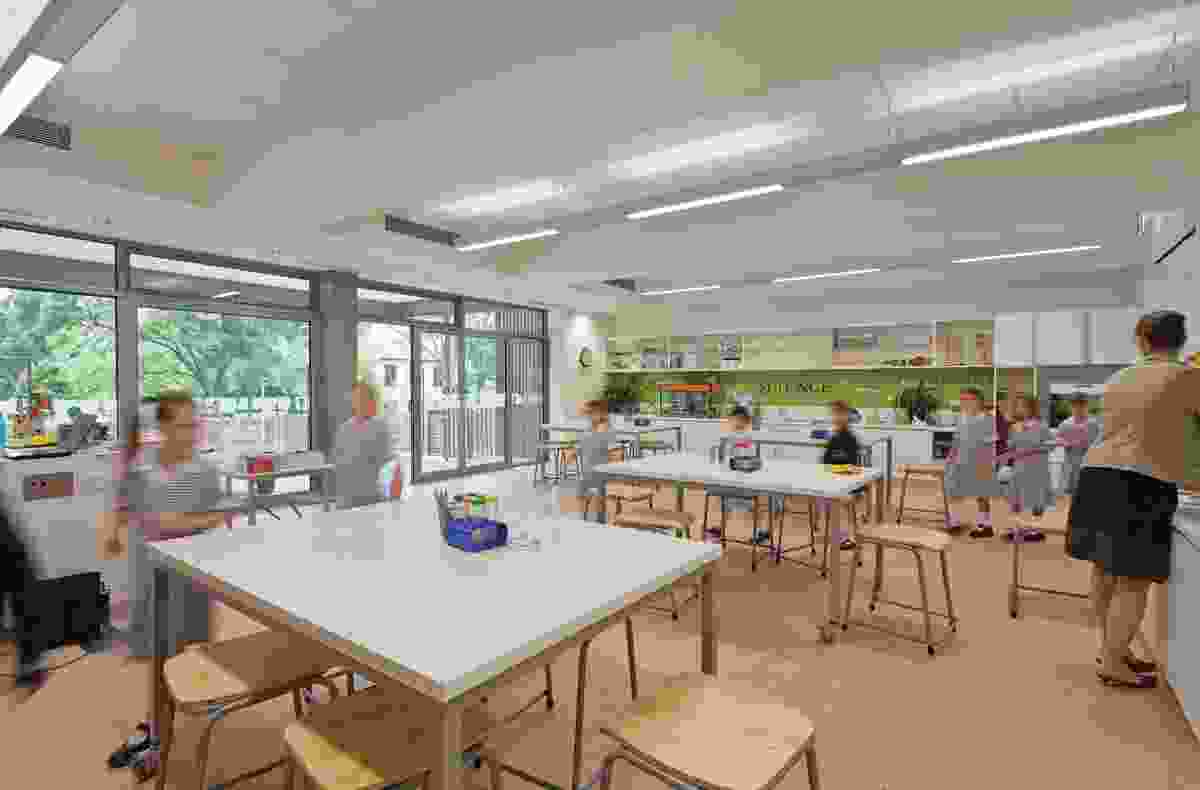 Areas for specialist subjects, such as art and science, are located in prominent, central positions so that the activities within are clearly visible. 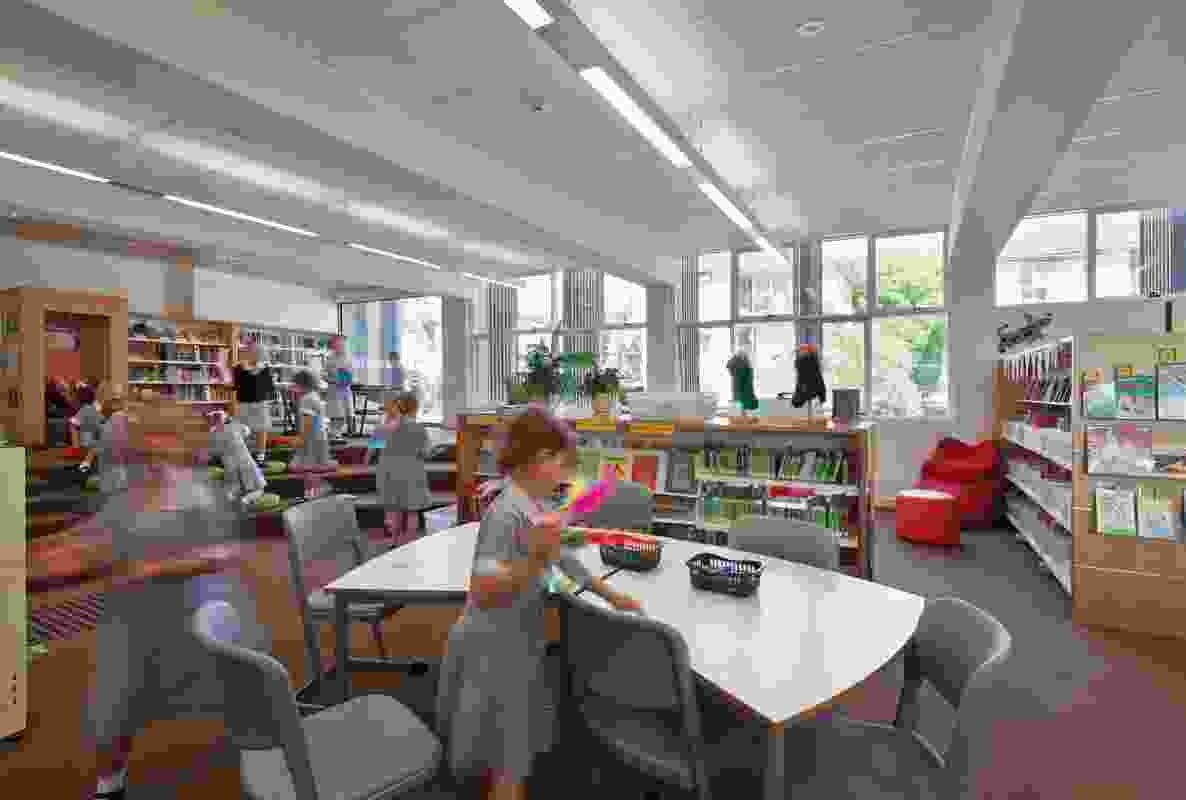 The new design has a strong relationship with public, open space. 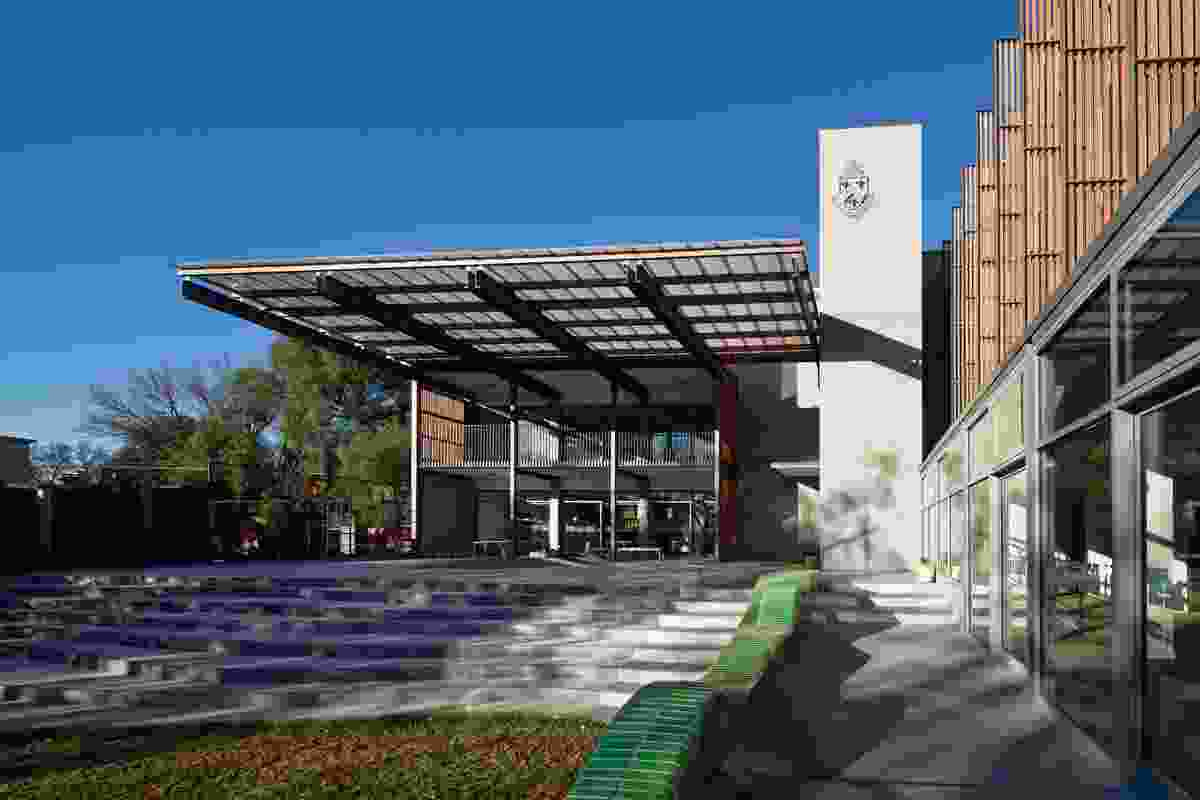 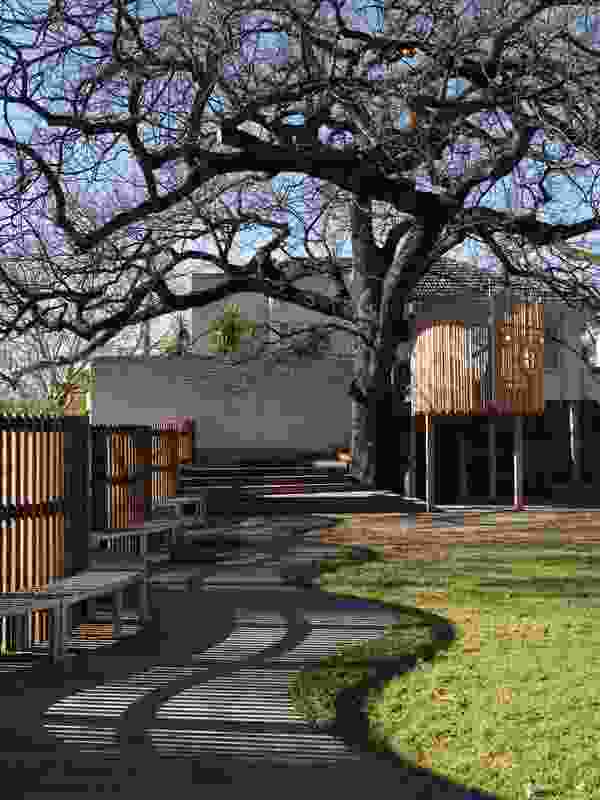 An undulating timber fence is reflected in a playground pathway. 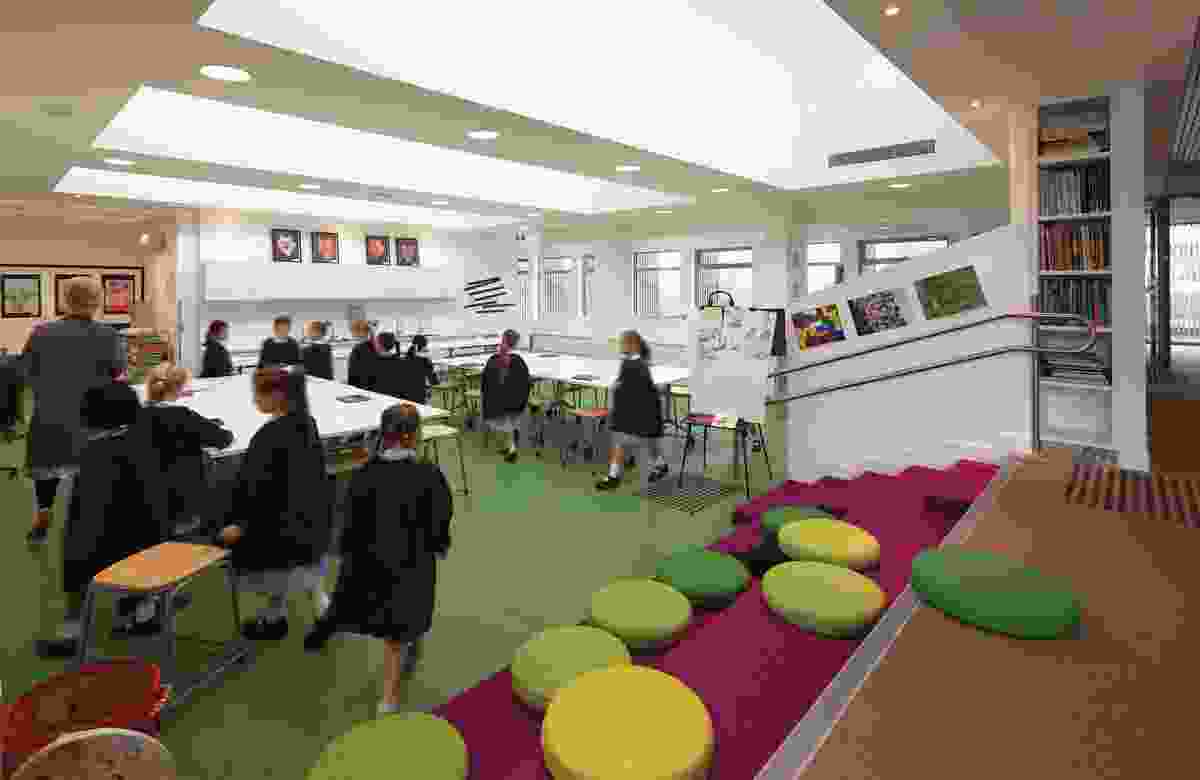 Learning spaces are open plan, with their design underpinned by the principle of transforming learning into a journey of discovery.