A house with an unlikely history is given an unashamedly contemporary renovation by Ha Architecture, Product and Environment that still references the original Edwardian form.

Double-height glazing at the house’s southern end lets in ample light. The house extends onto a small but useful courtyard.

According to the 2016 Australian census there are more than 1.7 million private dwellings in Melbourne. That’s a staggering amount for the city’s population of 4.4 million people, especially given that a sizeable chunk is too young to own a house. Imagine if you were to purchase one of these homes and find out that some seventy years earlier your grandmother had rented it, prior to the family relocating to Adelaide. This was the delightful surprise the current owners made while researching the history of their acquisition, just west of Melbourne’s CBD. The suburb attracts quite a contingent of ex-pat South Australians; the owners of Kensington Cathedral put it down to a sense of connection with a suburb of the same name in Adelaide.

With this family connection discovered, the client’s already-keen desire to retain the character of the house was made resolute. The brief to Nick Harding of Ha Architecture, Product and Environment was to keep as much of the character as possible while fashioning a third bedroom, new bathroom and a generous entertaining/family zone.

The original house is one in a procession of narrow, orderly Edwardians along what is known as The Ridgeway, the street terminating in a tall bluff overlooking the Melbourne ports. Much of the front of the house has been left as it was, other than a lick of paint here and there. Two small pop-outs on the eastern boundary challenge the historic notion that a metre-wide access all around the home be maintained. The first of these pop-outs accommodates an efficiently planned ensuite that services the main bedroom, while the second gives the following bedroom an additional metre of space; more importantly, though, each admits generous swathes of northern light, cross-ventilation and views to a compact but verdant fern garden.

As with the pop-outs, a new volume also pushes out to the site boundary to funnel northern light into the living spaces, but in many ways, the form of this extension is a fait accompli. The owners had purchased the property with a planning permit already in place for a generous two-storey mass that essentially cleared out the existing lean-tos and extended the gabled roof form south down the block. This basic envelope was all that was included in the planning permit, meaning there were no constraints on any of the internal planning, so rather than tempt fate, the decision was made to explore the opportunities the approved volume could proffer.

As we walk through the house, Nick offers that the cathedral ceiling and gabled form are elements he’s used before, though they probably wouldn’t have evolved naturally for this project had the constraint not existed. Despite this limitation, Nick felt that in the end it was a boon for the project. With the form being a given, energy was diverted into exploring and refining the finer detail – and it shows. From the macro gestures, such as creating views to the garden at the rear along the Edwardian hallway, to the subtle shift from the existing home into a lofty New York-style warehouse space, every aspect is considered and resolved. The mezzanine, deliberately held off the western boundary wall to maintain the double-height volume as one steps down into the new space, was apparently a latecomer in the design. However, it has been integrated perfectly – its exposed timber beams resonate with those on the main ceiling to create a warm, intimate scale to the family room below. The kitchen joinery, too, is a warm and precise timber insertion within the “warehouse” space, forming a backdrop to the heroically large stone island bench that anchors the tall volume and is the heart of the home.

The biggest decision of the project was determining how far south to take the large glazed gable. Considering the southern orientation of the windows, and balancing the desire for a generous entertaining zone with the need for some open garden space, the final decision feels perfect. With the large doors open, a small but useful courtyard seamlessly extends the interior, yet it can stand alone as a functional outdoor space in its own right.

Walking the rear laneway to the house, we pass several examples of other architects’ versions of a “second address” to these Edwardians; behind the polite heritage street fronts are the additions stitched to their hosts. While most of the neighbouring additions are busy distancing themselves from their counterpart, the Kensington Cathedral has captured an all-too-fleeting quality of being obviously, but not combatively, contemporary. In the process, Ha Architecture, Product and Environment has perhaps made the already difficult debate around designing contemporary architecture within a heritage context just that little bit harder to navigate. 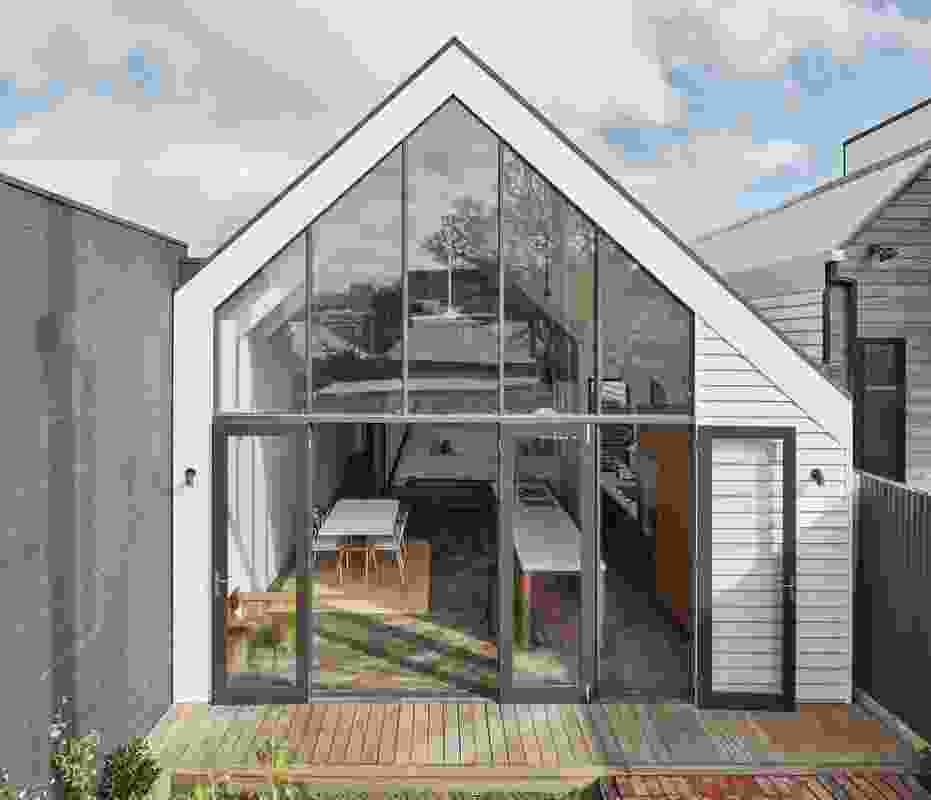 Double-height glazing at the house’s southern end lets in ample light. The house extends onto a small but useful courtyard. 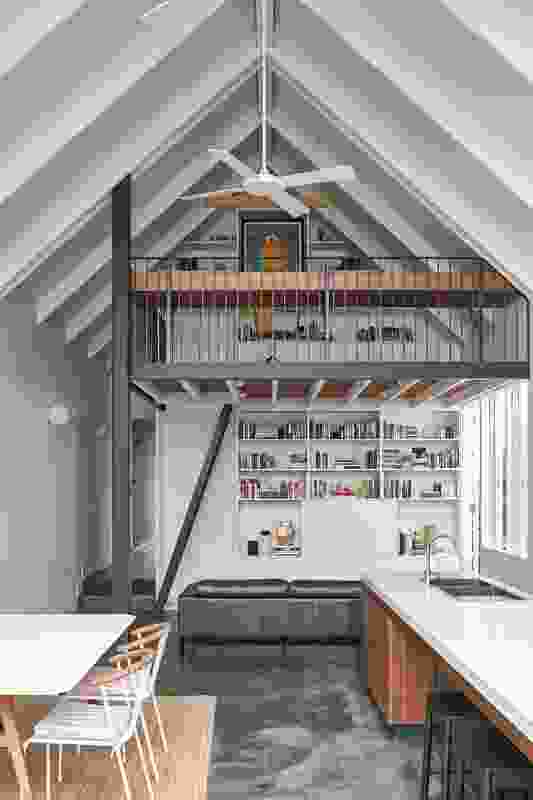 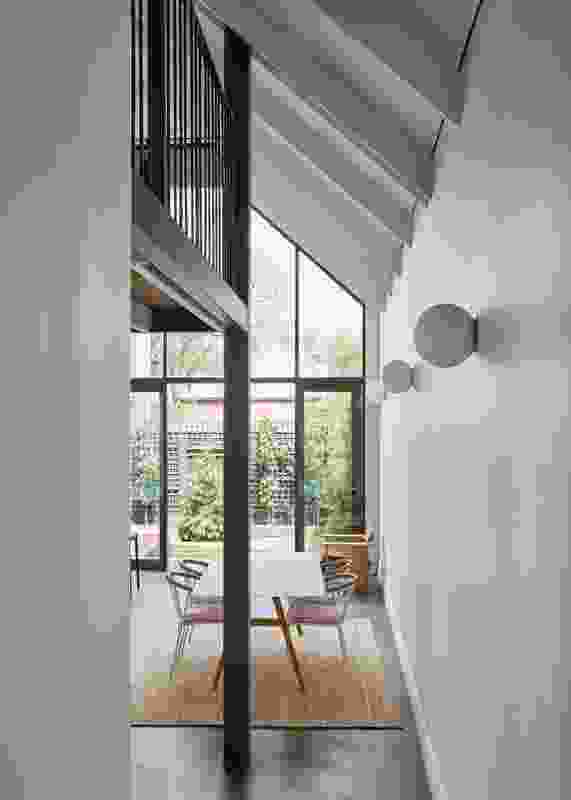 The extant hallway opens to views of the verdant rear garden, beyond the open living space. 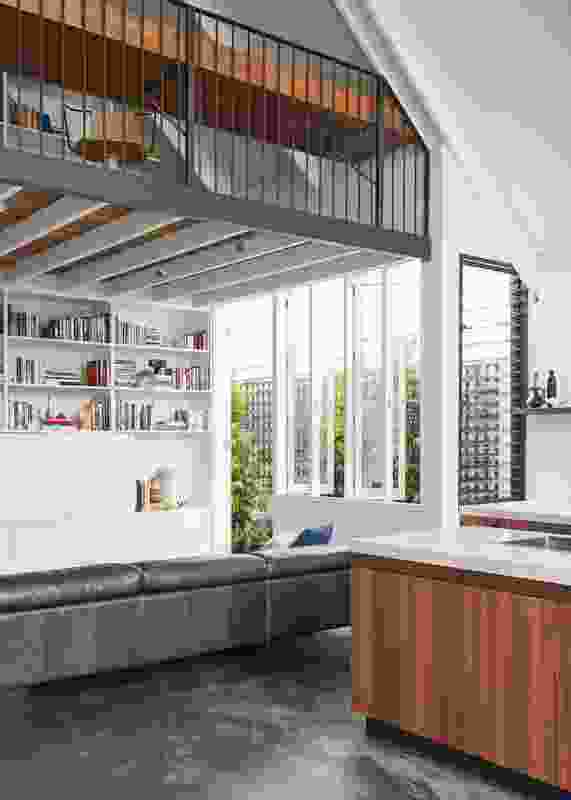 The mezzanine’s exposed timber beams resonate with those of the main ceiling above. 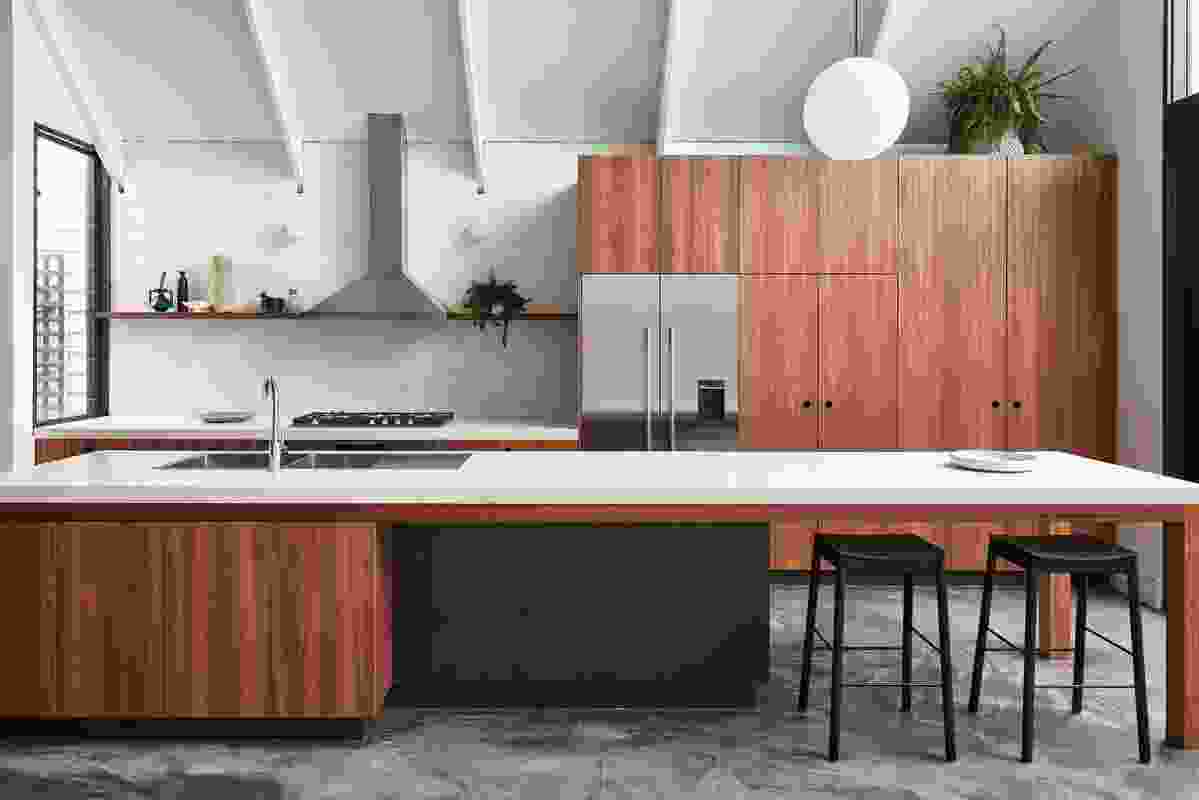 A kitchen island extends to become a bench for casual gatherings. 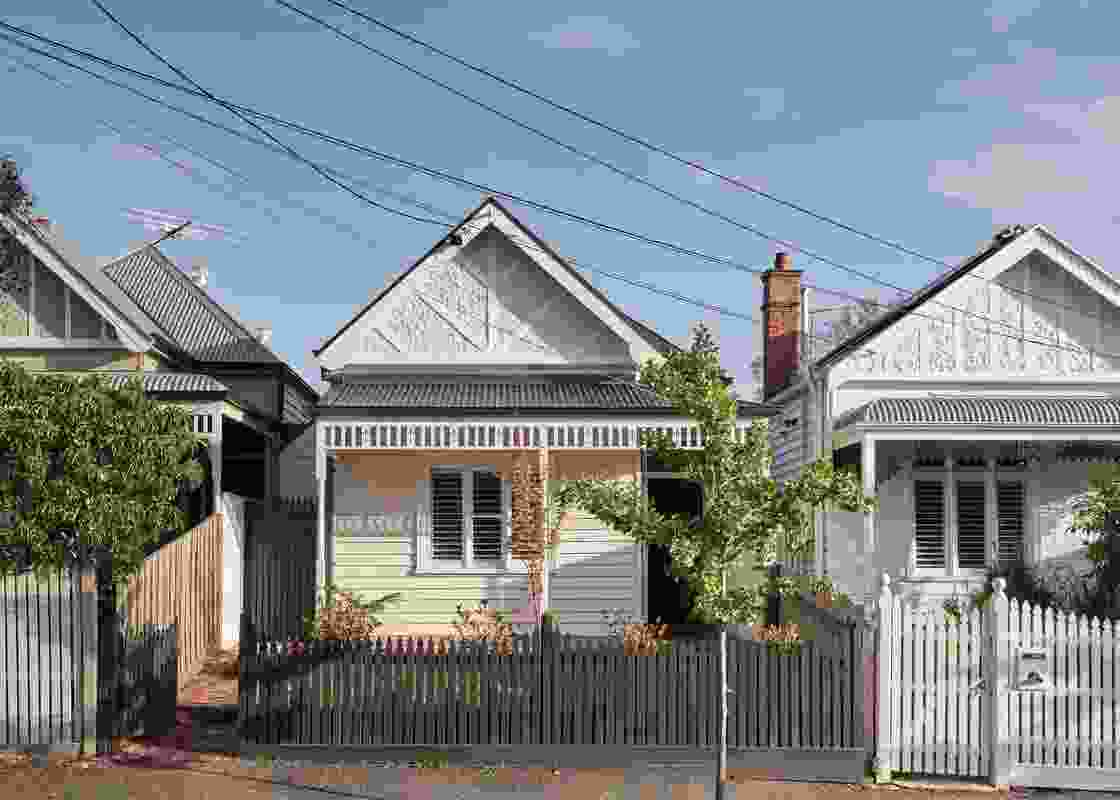 One of a row of orderly Edwardian houses in Kensington, its facade has been left largely untouched.