For a family house on a steep site in Kew, Victoria, Bent Architecture grouped functional zones and fragmented the plan to balance privacy and views.

The two upper wings of the house split off from each other.

On a steep hill in leafy Kew, an inner suburb of Melbourne, views to the north overlook a valley filled with large houses and lush gardens. The importance of prospect on this site was obvious to Bent Architecture from the beginning. “I think the magic of architecture is in defining that balance between protection and prospect,” explains director Paul Porjazoski. “The balance between the home as a shelter and cocoon, and allowing its inhabitants to look out … that’s what we’ve tried to do here, create that balance.”

The architects have attempted to create better engagement between what was a “very static object plonked in the middle of the site” and the surrounding landscape. Kew House was designed for a couple with two young children. Bent Architecture grouped the functional areas into zones and then fragmented the plan, making the living areas “revolve around the courtyard,” as Paul puts it. This strategy of fragmentation is illustrated in the front entry experience.

You enter a fissure in the stony base of the ground floor, and the protective mass gives way to glass and light when the door opens at the top of the stairs. The initial views are of the courtyard – the east and west wings of the house create privacy from the neighbours. You are then led to the living areas by an axis of bluestone flooring, emphasized above your head by an unusual ceiling of seagrass matting, and from here the views of the valley open up.

What I have described as an “axis” is more correctly a “gallery,” as Paul calls it, because it wraps two sides of the courtyard. Its materials are intentionally natural in feel, and blend with the garden outside its glass walls. The courtyard is paved in a similar bluestone tile with the boundary between inside and outside further blurred by a concrete block retaining wall-cum-barbecue bench that penetrates the glass to form an internal bench in the kids’ play area.

In the living area, the gallery becomes an axis by continuing through the space, literally dividing an open plan into separate spatial zones. The spaces each side have higher ceilings that rake in different directions. On one side a clerestory is opened up above the seagrass strip, allowing additional northern light into the dining area. The materials and colours shift at this threshold, too.

This play with scale and material is key to Bent Architecture’s work. Paul recalls studying Steven Holl at university, in particular the renowned architect’s notion of the three scales of design, from large to middle to small (detail). “These things might seem really trivial, just playing with form, but it is actually quite critical to understand those different scales and how space is experienced,” Paul says.

The large and small scales are easy to spot in the Kew House: the large scale is the massing of the building, for instance the way the two upper wings split off from each other and hang above the ground floor without being supported by columns; and the small scale includes the junctions between materials, like the transition between concrete block and black zinc, or between timber and bluestone.

And in between? One example of a middle-scale design element could be what Paul describes as a “peephole” in the otherwise solid balustrade to the upper deck. The timber and zinc-clad balustrade provides privacy, but a small glass panel in it allows a framed view down to the driveway and the street. The scenario is a microcosm of the broader themes of the house, striking a balance between protection and prospect.

Paul is less interested in form-making for its own sake, preferring to emphasize a specific response to a brief and site. “The house doesn’t look like anything we’ve done before but that’s the point of our work,” he says. The decision to make the first floor overhang the ground floor resulted from the need to fit a car turning circle below, and to provide adequate backyard space above. “The cantilever is not the kind of a formal gesture that we typically rely on,” Paul says.

Other functional triumphs include a parental surveillance spot in the kitchen, from which the children’s play area can be viewed across the glazed courtyard. The family’s future has also been considered – the downstairs area has been designed to operate independently for teenaged children, or perhaps to house aged parents if needed.

Kew contains many modernist houses built in the 1950s and 60s, a period that Paul loves. “Those architects were really breaking new ground when it came to the relationship between architecture and landscape,” he says. Bent Architecture’s choice of black for the external cladding was initially controversial, as the clients had stipulated their dislike for the colour in their brief.

However, it was a calculated choice in relation to the leafy surrounds – the dark tone recedes, bringing greenery to the fore. The house presents to the street a dynamic, asymmetrical form that sits well with Kew’s experimental architectural history.

This project works on a number of scales, and demonstrates a keen sensitivity to materials and their textural effects. And to family life; if you ever visit, it’s likely the kids will be watching through their balcony peephole. 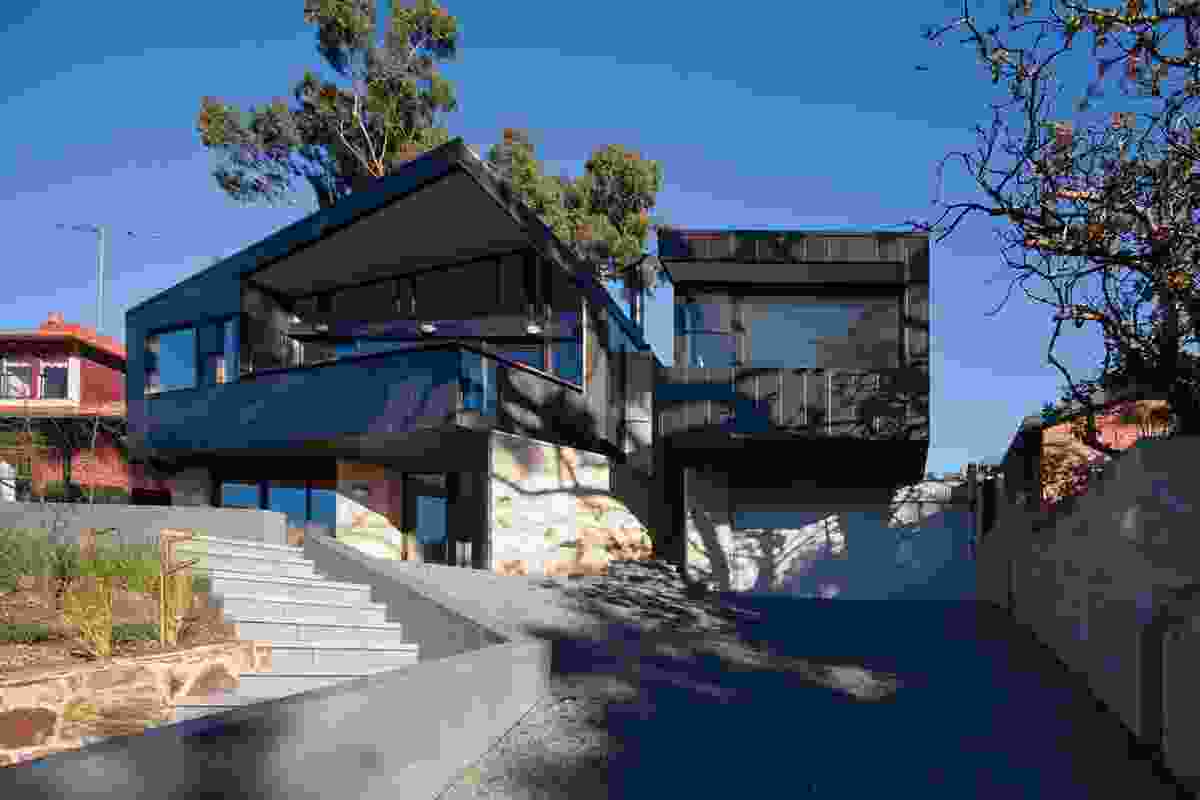 The two upper wings of the house split off from each other. 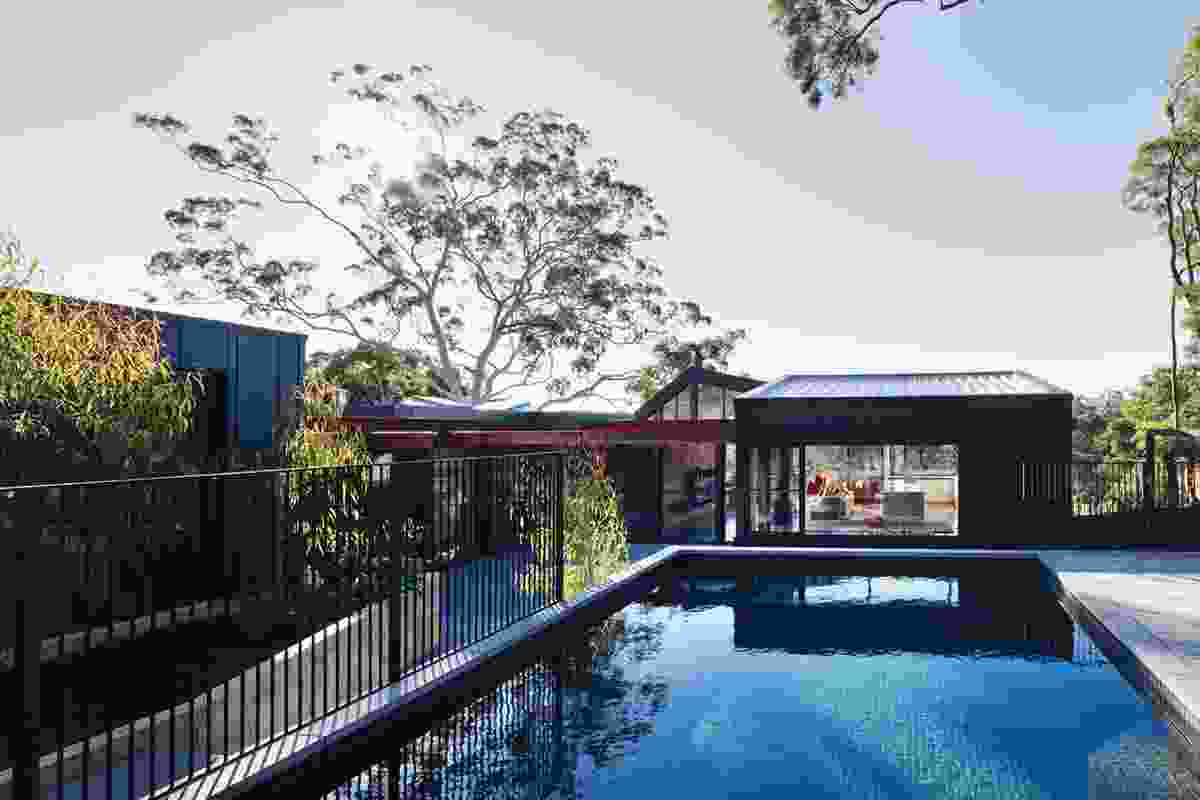 The the pool helps to define the corner of the central courtyard. 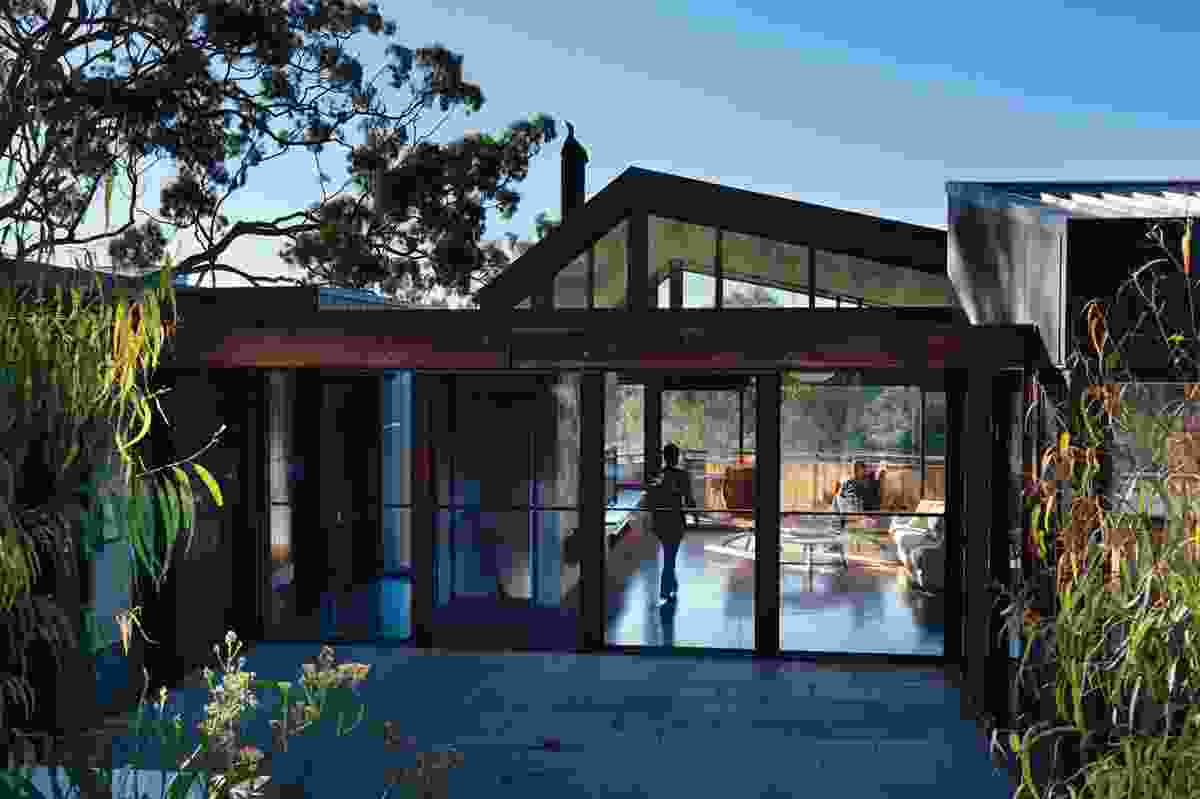 The dark cladding recedes, bringing the surrounding greenery to the fore. 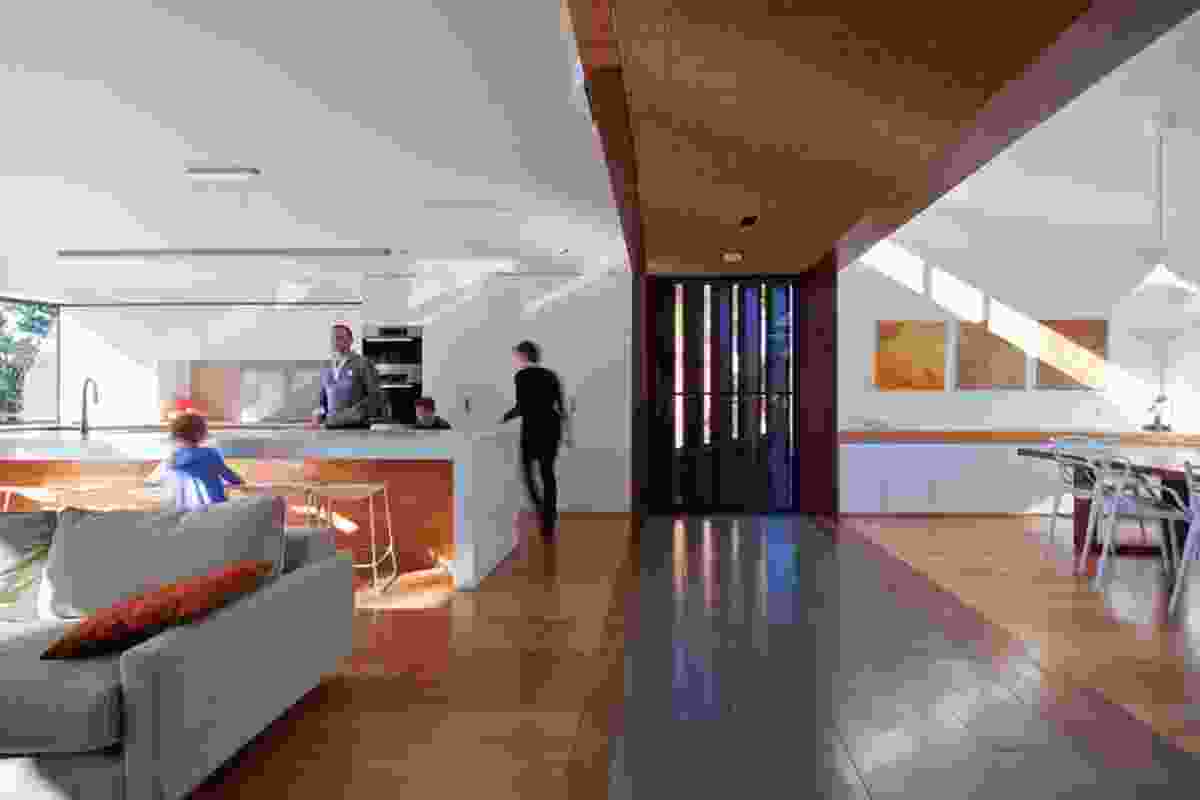 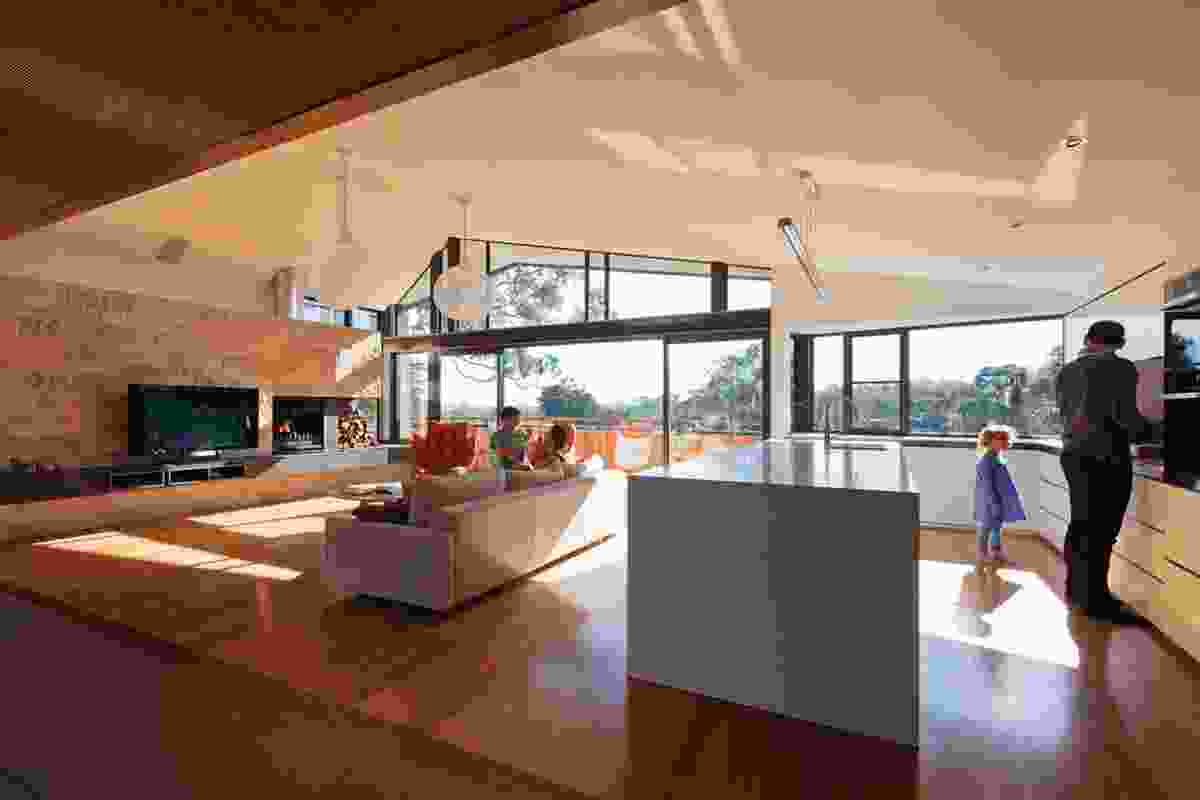 The northern edge of the living area opens up to views of the valley. 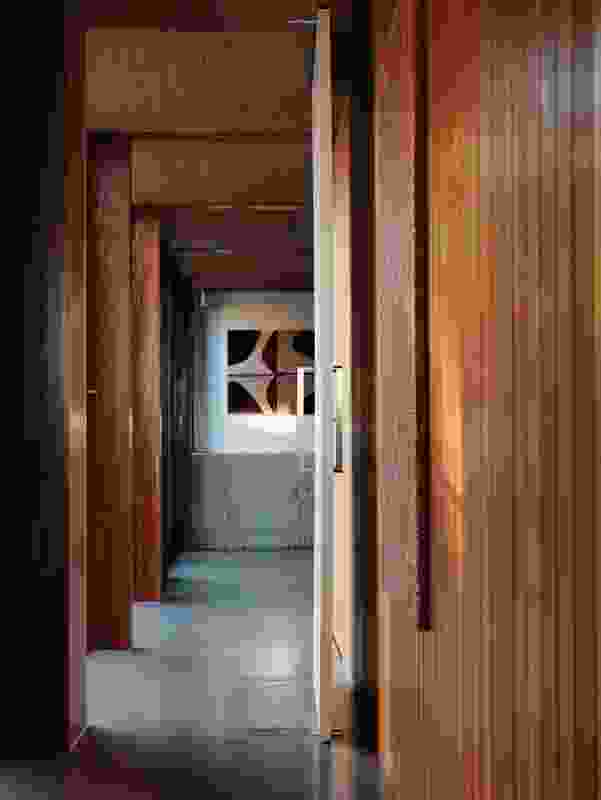 Playing with scale and material is key to Bent Architecture’s work.