Ensuring that both old and new components retain their integrity, this home by Studio [R] is a well-crafted model of contemporary design.

The new living room opens up the entire back elevation of the house.

Introducing a major new architectural element in a renovation requires, at the very least, a degree of dialogue with the existing structure. In this project the intention of the architects at Studio [R], together with interior designers Arnold Lane, was to create a contemporary pavilion in harmony with the grand scale and rich detail of a 1930s interwar home on Sydney’s leafy North Shore.

When the owners purchased the property over nine years ago, they sought a house with period charm but one they could make their mark on. They embarked on a staged interior remodelling with Arnold Lane, with whom they had previously worked through their commercial construction company. The major works included reconfiguring the new ground-level master suite and study, along with the entry, dining room, and upstairs bedroom and study zone for the two (now) teenaged children.

Studio [R] was brought in as architect for the new addition, a rear pavilion containing the main living areas. Largely hidden from the street, the pavilion looks over a spectacular tree canopy. Gaining council approval was a challenging and time-consuming process and, in total, twenty-one months were spent on design and documentation, with a comparatively efficient eight months required for construction.

Opening up the entire back elevation of the house, the architects literally sliced off the former L-shaped living and balcony areas. “In order to make a clear distinction between old and new, the exposed sectional profile of interlocking hipped roof forms of the old was clad and set against the minimal new roof plane of the pavilion,” says project director Sam Rigoli.

A wide span steel structure allows for a largely column-free space. Overhead, each perimeter wall appears detached from the white, timber-panelled ceiling by an uninterrupted band of highlight glass. This visually transforms the room into a series of floating planes where “the ever-changing light and atmosphere of the external environment continually alter the mood of the interior,” says project architect Mark Szczerbicki.

Moving from the restrained opulence of the more formal refurbished existing rooms to the highly crafted pavilion, “it was important that the extension merge effortlessly, rather than starkly contrast, with the elegance of the existing rooms … the intention was to create a similar richness of detail but in a simplified form,” explains interior designer Kathy Arnold. The stainless steel kitchen is simple and abstract, with a backdrop of dark timber veneer cabinetry containing the refrigerator and double oven, flanked by a lineal counter topped with statuary vein marble.

The large space is subtly divided by two floor-to-ceiling display units, cleverly concealing lighting, support structure and airconditioning grilles. The decorative moulding hints at period elements elsewhere and is echoed in the concealed storage across the rear wall of the pavilion. A marble credenza signals the edge of the living area. The rich timber joinery of the kitchen is mirrored in a lower unit along the eastern wall, complemented by the warm tones of ironbark timber flooring and the charcoal fabric of the L-shaped seating zone. Sliding double-glazed panels disappear into adjacent wall cavities for a seamless connection to the outdoor terrace/dining/barbecue zone, protected by a 3.4-metre cantilevered roof.

Downstairs, the garage and adjacent rumpus area were extended to give breathing space to the ground level. Sleek slatted timber and glass sliding-door panels on the perimeter walls allow an abundance of light throughout, complemented by the creamy tones of travertine flooring, also used on the terrace above. Stepping down the site, an existing 1960s swimming pool has been refurbished to great effect with shimmering black, grey and brown glass mosaic tiles, while a new tennis court stretches to the rear boundary.

Externally, horizontally banded sandstone-clad walls reinterpret the podium language of the original load-bearing sandstone base. The charcoal-toned, metal-deck roof hovering over the new addition references the adjacent slate roof. The muted greys and greens of the landscape design reinforce the home’s connection with the greater bushland environment.

In a neighbourhood of grand old traditional properties, this house has emerged as an ambassador for contemporary design, inspiring the next-door neighbour to undertake a similarly scaled project (and even use the same builder). Along with a freethinking yet meticulous client and the collaboration of the design and construction teams, the success of this project lies in its use of commonalities of tone, volume and materials with the existing built form, ensuring that both the old and new retain their integrity. 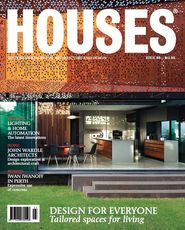 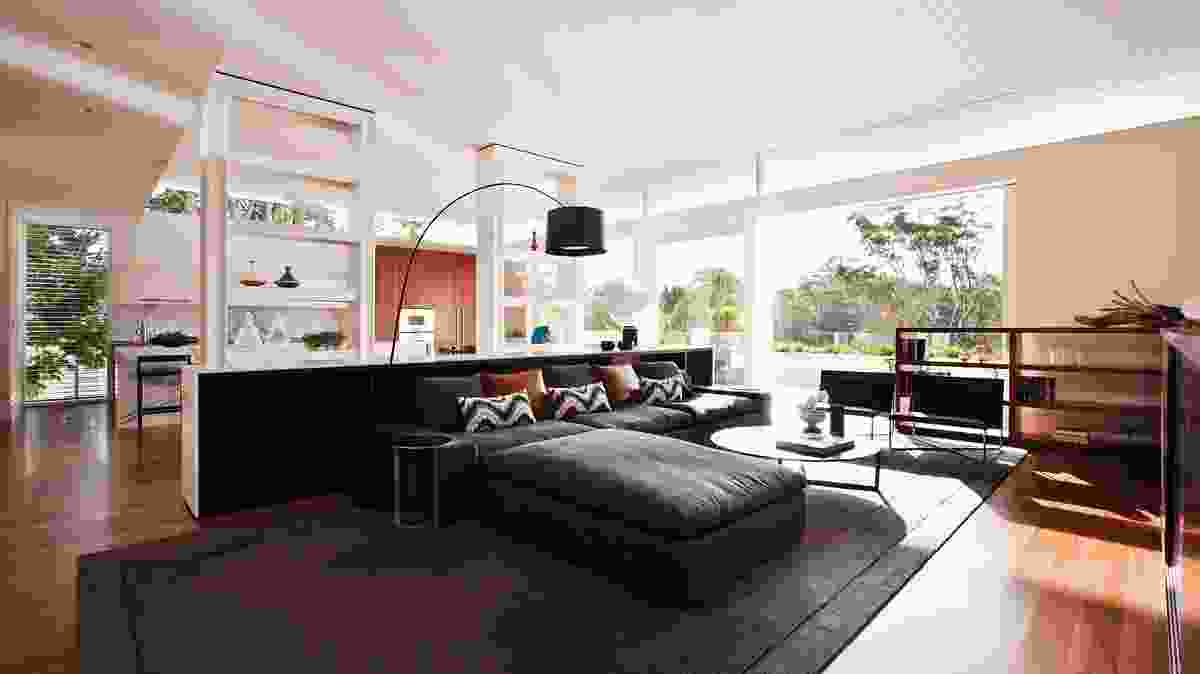 The new living room opens up the entire back elevation of the house. 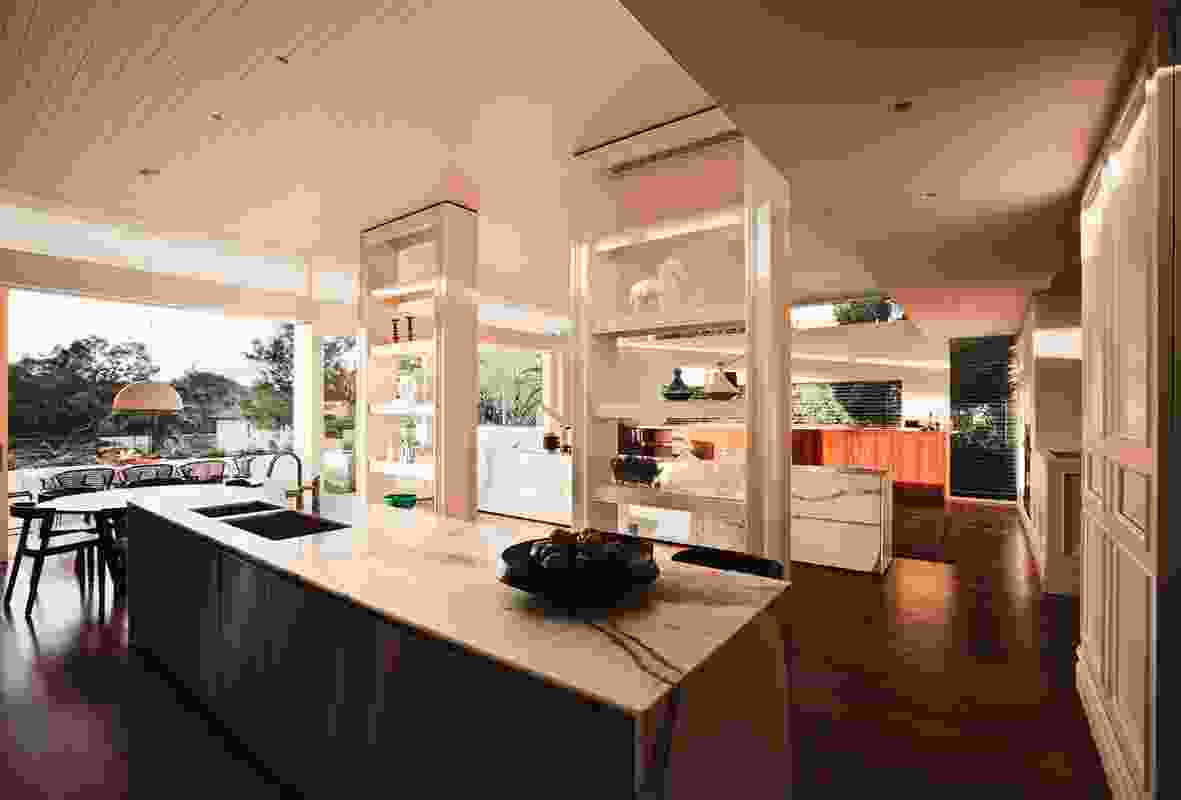 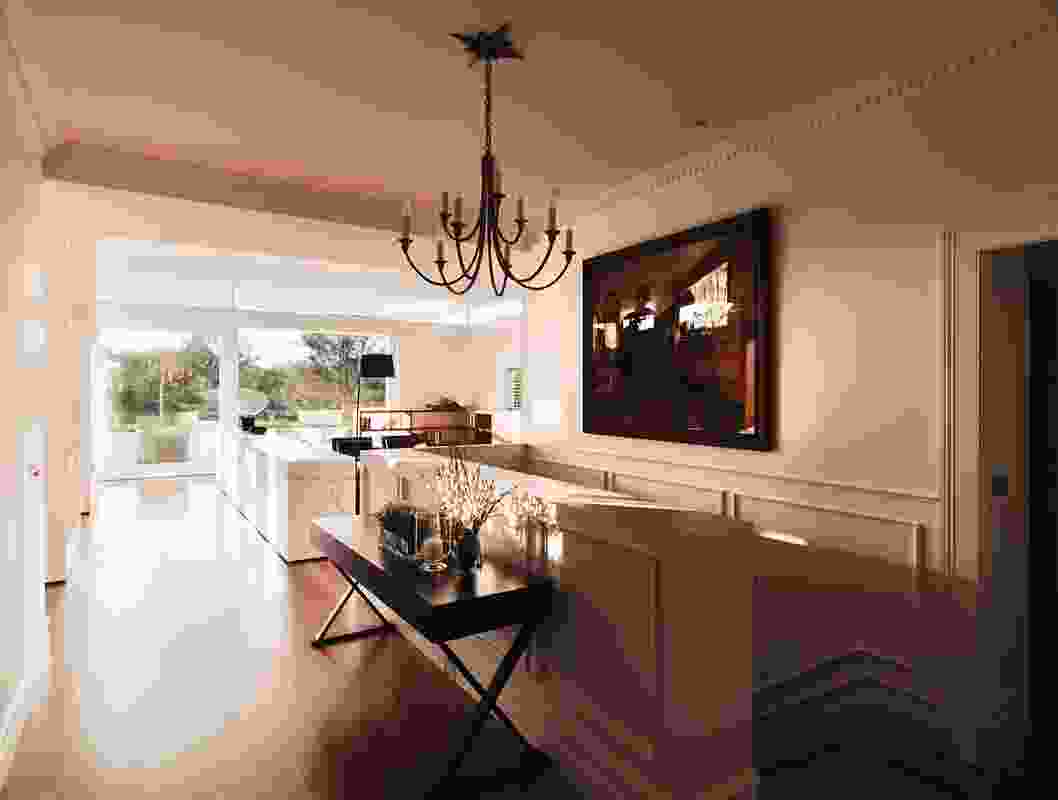 A stairway leads down to the garage and rumpus room. Artwork: Trevor Mein. 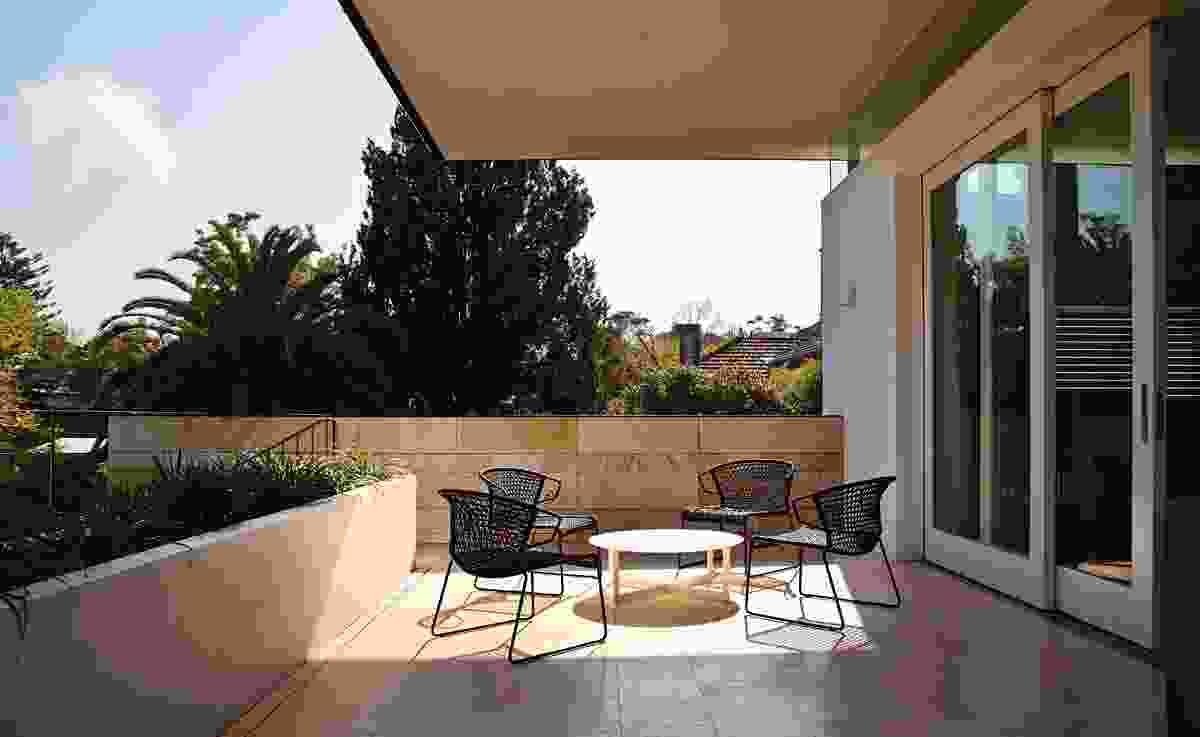 Glazed sliding doors open out onto a terrace that overlooks a 1960s swimming pool. 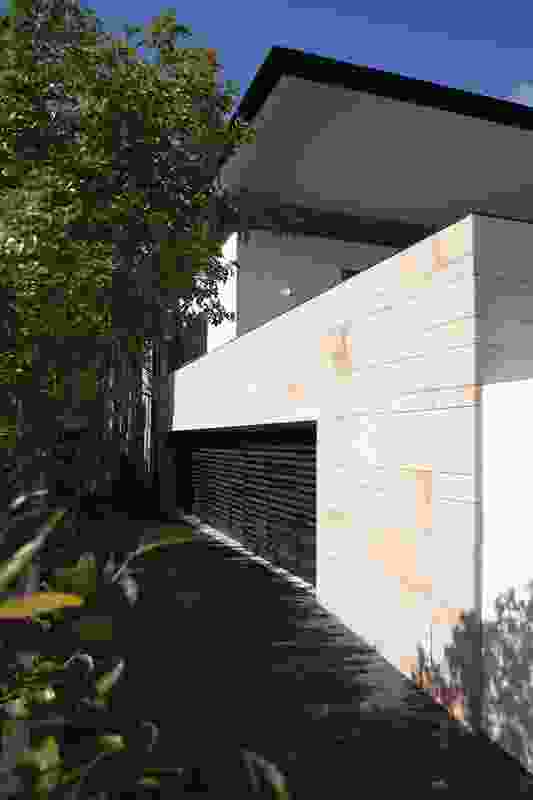 The horizontally banded sandstone-clad walls reinterpret the podium language of the original load-bearing base.