On the New South Wales central coast, a house by architect David Boyle sits among the rocky outcrops of its rugged bush block.

The King Residence perched on a rocky outcrop above Phegan’s Bay.

Perched on a rocky outcrop towering above the picturesque beachfront of Phegan’s Bay on the New South Wales central coast, David Boyle’s King Residence rose phoenix-like from the ashes of a house destroyed by bushfire on New Year’s Day, 2006.

Little remained of the previous house, save some remnant block work and a kidney-shaped swimming pool that was to be kept as part of the new home. Both architect and client have a deep sympathy for this rugged piece of land and the brief to David Boyle was that the new house should maintain the integrity of the rock formations found throughout the area.

Boyle’s design not only enhances the natural assets of the site, it addresses a few of the client’s issues from where they had previously lived – in a house that did not receive much sunlight at all, particularly in winter. In contrast, the elevated position of this house makes it a sun-trap, flooding the living areas with natural light and presenting lots of opportunities for harnessing solar power.

Another drawback of the old home was its lack of flat, open space, except for its legacy of two flat pockets. The new site also contains some complex level changes, and figuring out how to connect these two flat pockets to the new site ultimately governed the form of the house. The result reflects the site’s geometry with a series of platforms nestled in the tree canopies, and built on a central rock base. The sculptural platforms have both lightness and bulk, and reach out to the site boundaries, like fingers outstretched out to meet the sun.

At one end, the flat space contains a kitchen garden and small verandah that continues out from the cooking and dining areas. The opposite end has a terrace that appears as an extension of the pool’s surface. During construction, the pool had remained covered for safety reasons until the house was almost finished, so Boyle had incorporated it into the design sight unseen. That definitive moment when the pool was finally revealed, and he saw how it worked in concert with the house, was one of his favourite moments of the project. The original brown Pebblecrete lining gives the pool a more natural billabong-like quality, sitting harmoniously with the house and blending with its environment.

Given the fate of the former house, bushfire protection was a high priority in Boyle’s design. Non-combustible materials including hardwood and fire retardant timbers were used for decking and support structures. Eaves, awnings and steel-mesh fly-screens shield the envelope from embers in the event of a bushfire. The sub-floor space is enclosed with aluminium.

As with all of his projects, Boyle employed a range of sustainability initiatives from passive measures such as orientation (living areas facing north) and material selection, to active measures such as solar collection panels and rainwater tanks. Having lived in the house through four full seasons now, the client reports that it performs excellently in both the heat and cold. The King Residence opens a new chapter for this craggy site, in the form of a dwelling that comfortably coexists with, rather than dominates, the bush setting. 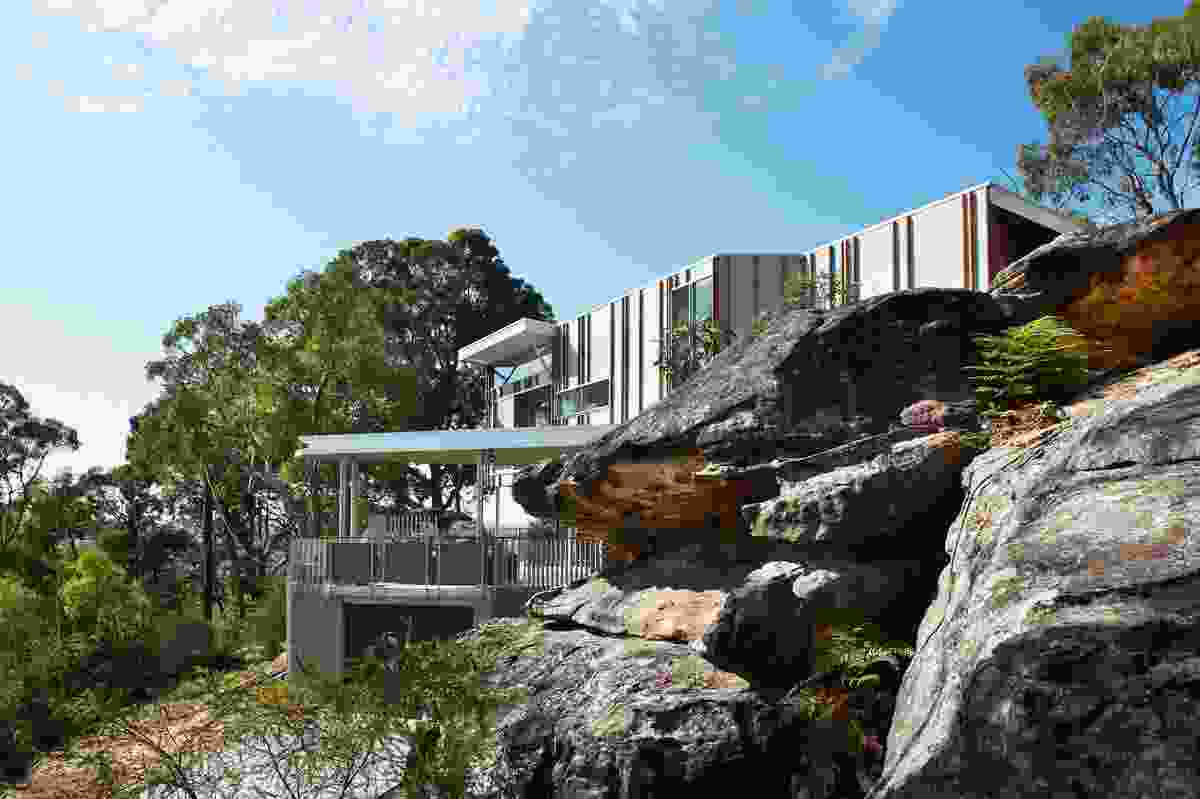 The King Residence perched on a rocky outcrop above Phegan’s Bay. 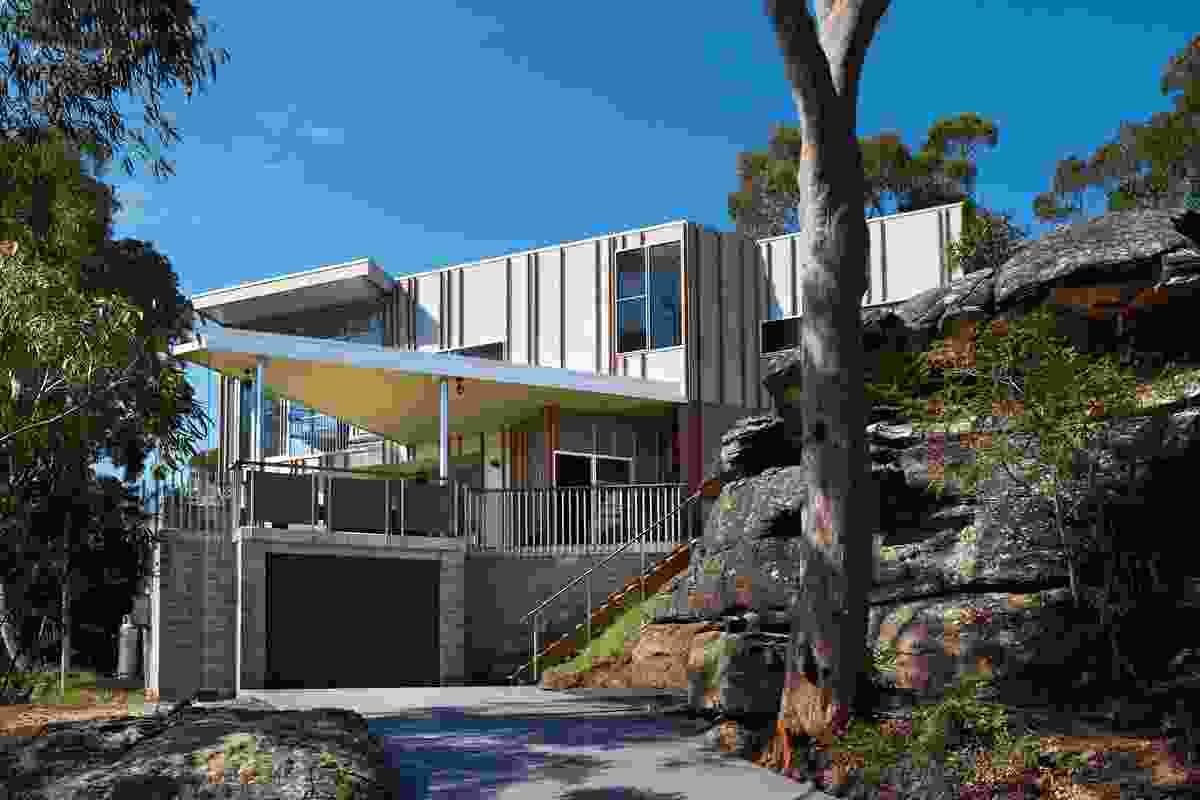 A series of platforms connects the two outdoor spaces. 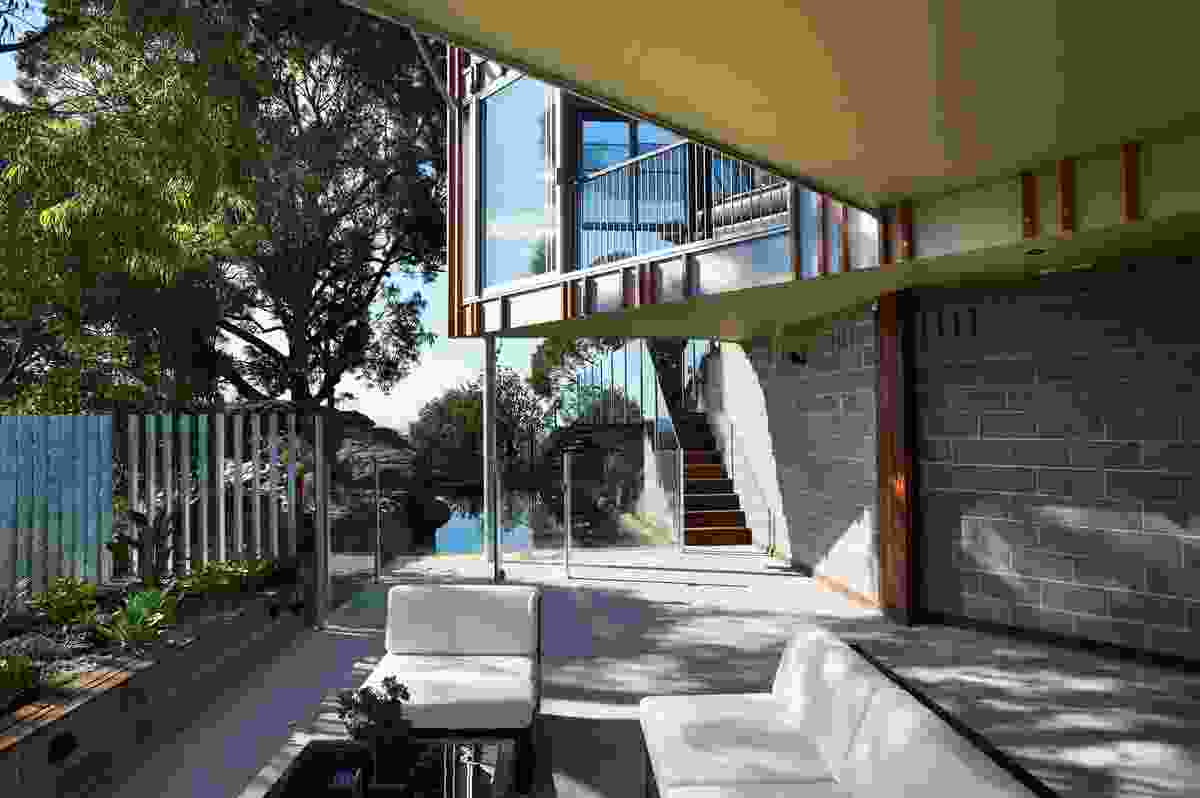 One of two level outdoor areas on the high site. 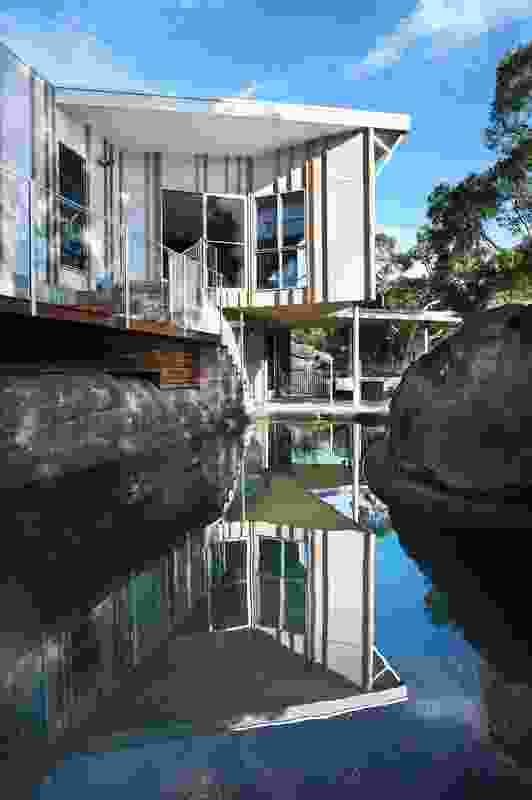 The existing pebblecrete-lined pool is integrated into the design. 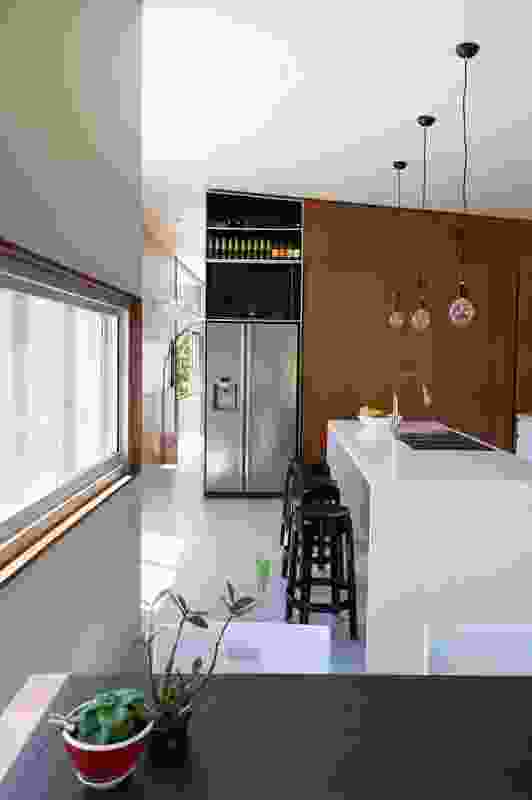 The kitchen and dining area opens to a deck and kitchen garden. 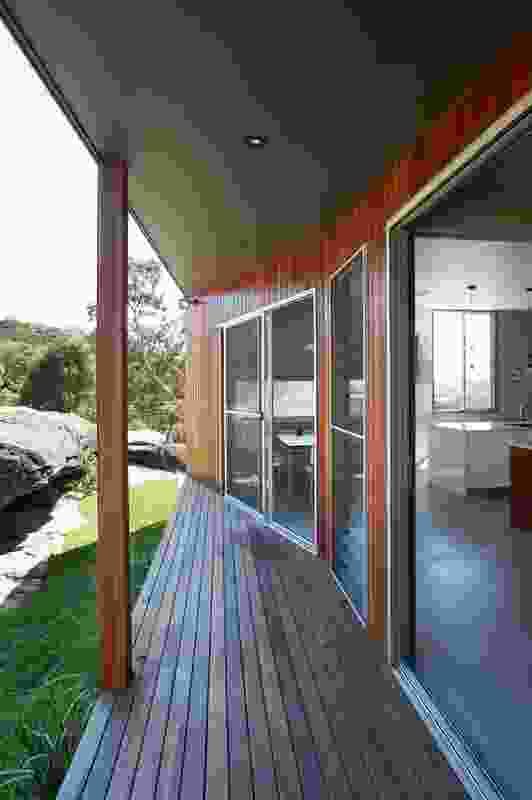 A deck off the kitchen and dining area. 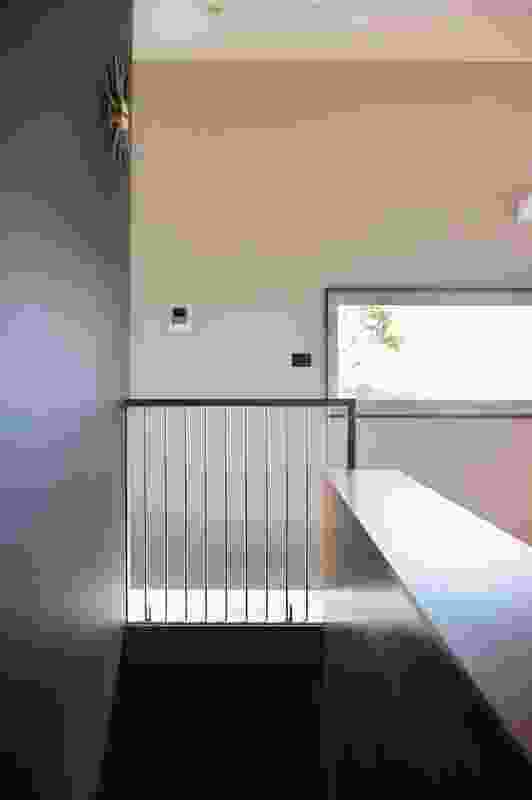 Stair landing on the first floor. 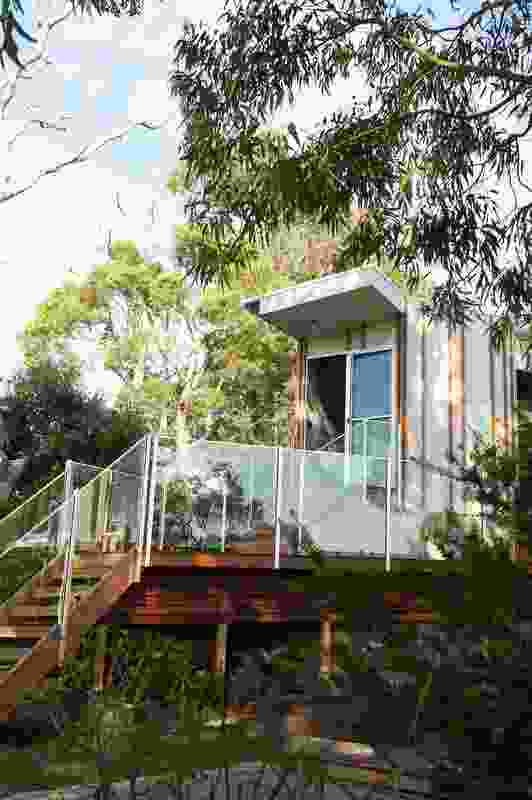 A balcony steps down to the swimming pool. 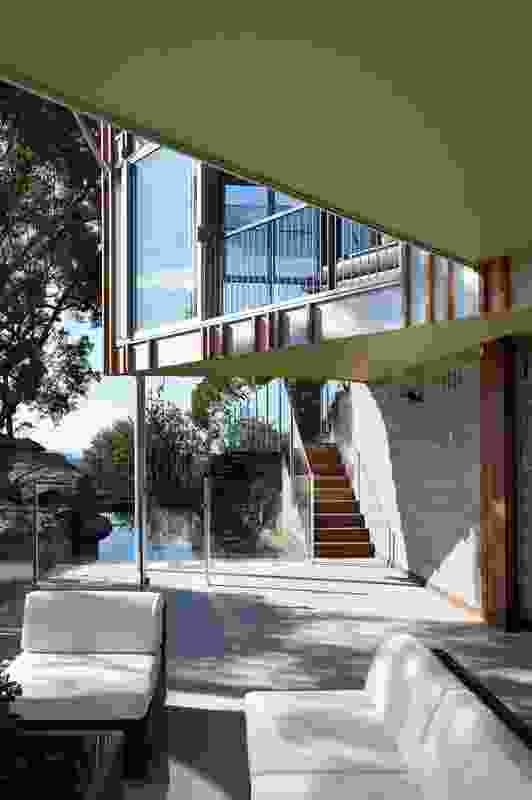 Close-up of the terrace adjoining the pool. 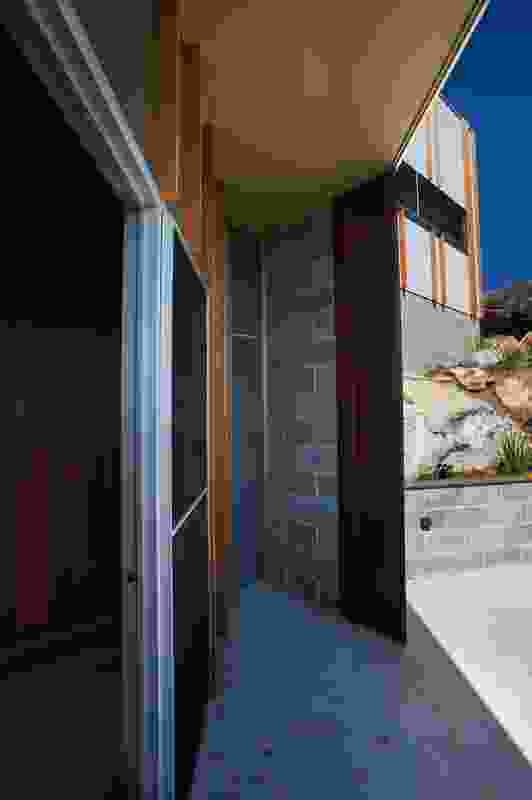 Lower level undercroft with a trademark flash of colour.