It is hardly surprising that architects Donaldson + Warn wanted to maximize the landscape experience in their design for the new Kings Park Education Centre, a new environmental teaching space for the Botanic Gardens and Parks Authority situated adjacent to the Naturescape adventure playground in Perth’s celebrated parklands. With such a dramatic site, they saw an opportunity to bury the building into the earth, and in doing so, make a statement about what the practice refers to as the “aesthetics of sustainability.”

What that means is the building has joined a growing movement away from the type of sustainable design that is visually identified by the recognizable mechanical tropes, to an architecture that operates in a highly sustainable way, but communicates it less overtly. “Expressive and romantic,” is how Geoff Warn (Donaldson + Warn) describes its contoured glass form that reaches out to the site’s edges and refracts the landscape around it.

The building is literally submerged in the site by around 700mm of earth coverage and the vegetation spilling from the green roof, which will become thicker and longer when the plants reach maturation in five to ten years.

An accentuated landscape experience starts at the point of entry. As visitors arrive they walk down a ramp, artfully zig-zagged to hide the building while appearing to descend into the parkland. The building is only revealed when you arrive at the concrete patio, still facing out to the gardens beyond. “Even inside, you feel that only a thin sheet of glass separates you from the outdoors,” says Warn.

The web of pathways that weave through Kings Park were extended through the building, splitting the program in half between the staff rooms and facilities and the atelier-style open classroom that doubles as an event space. This floor plan can adapt to the needs of different school groups, and staff areas can be locked off, allowing the room to be used for after-hours functions.

A tree trunk motif used throughout the project is a reference to a stand of plantation pines cleared from the site as part of an ongoing program to rid Kings Park of non-indigenous tree species. This motif appears in door handle details, the columns (both internal and external) and recycled timber boarding. It is also repeated in the various artworks by Pamela Gaunt that mediate a transition between the natural setting and the built form.

One of these artworks is a vertical column fitted with low-voltage coloured lights that fluctuate to indicate the current energy usage of the building, another is a collection of solar-lit discs in the ground and floor that offer glimpses down into the earth. These coloured glass panes are roughly positioned where the old pine trees stood and are sand-blasted with the image of a seed of one of the species found in Kings Park. Below, the root patterns of the same plant are printed onto another glass sheet.

Although the green strategies are covert, the building is reportedly exceeding expectations. The green roof overhang provides passive cooling by sheltering from the summer sun and excess energy collected by the large solar array is supplied to the mains grid. The building is reporting a net reduction in greenhouse gas emissions and lower overall energy use than classrooms of a similar size.

By focusing on these deep-seated links to the landscape and environment Donaldson + Warn have brought to life their ideals of sustainability and created a piece of living architecture. Like the nature that envelops it, the building will no doubt continue to evolve its form and texture over time. 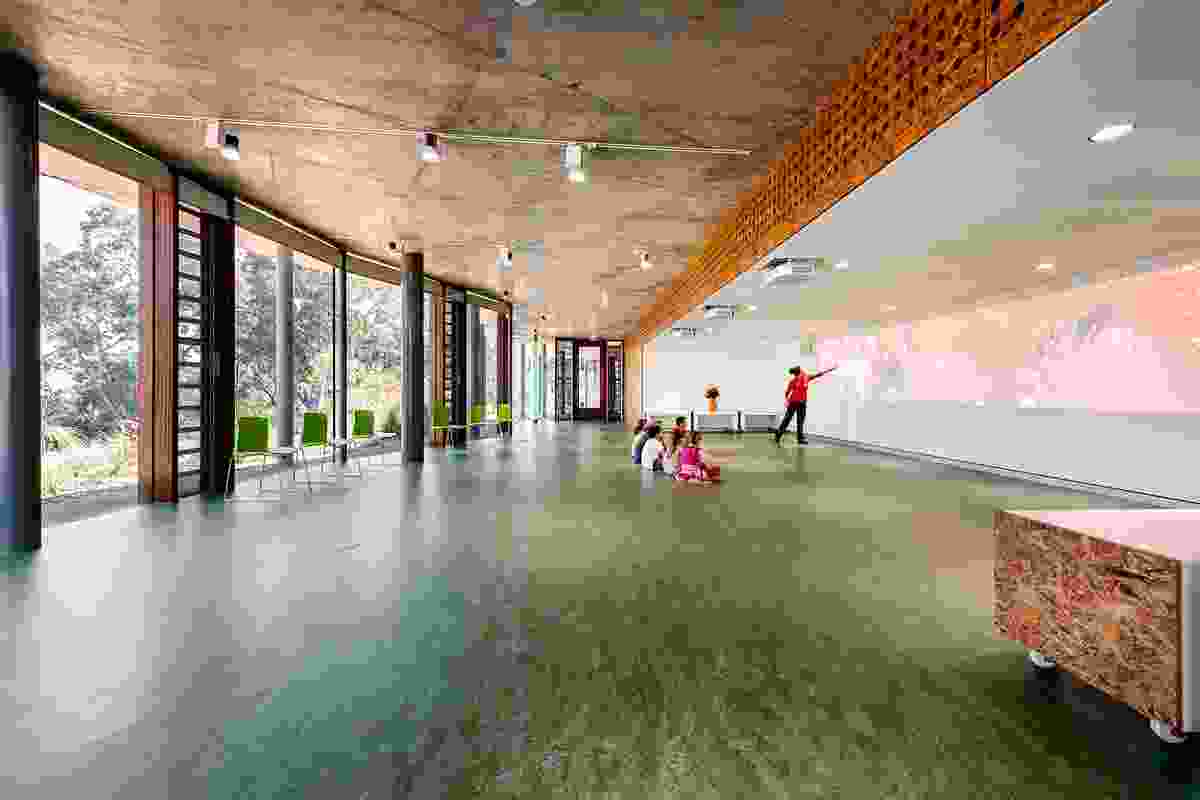 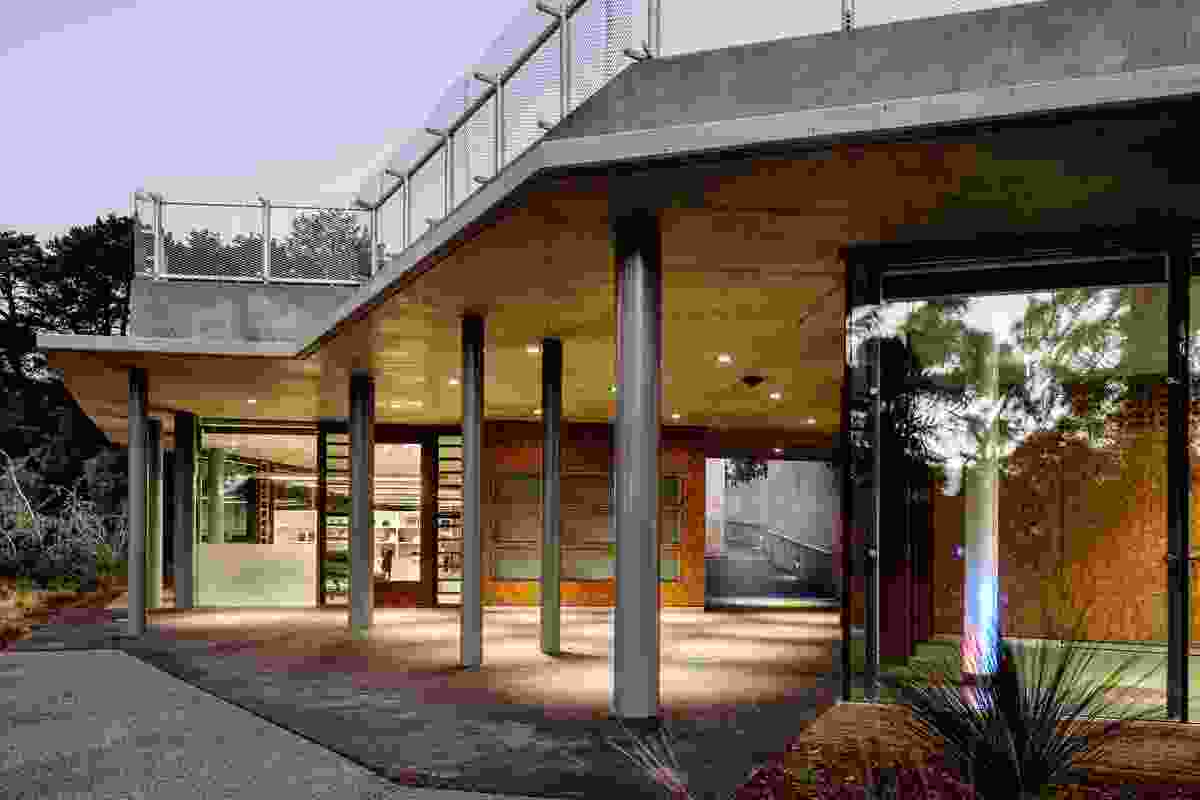 The interactive art column by Pam Gaunt shows the current energy use of the building. 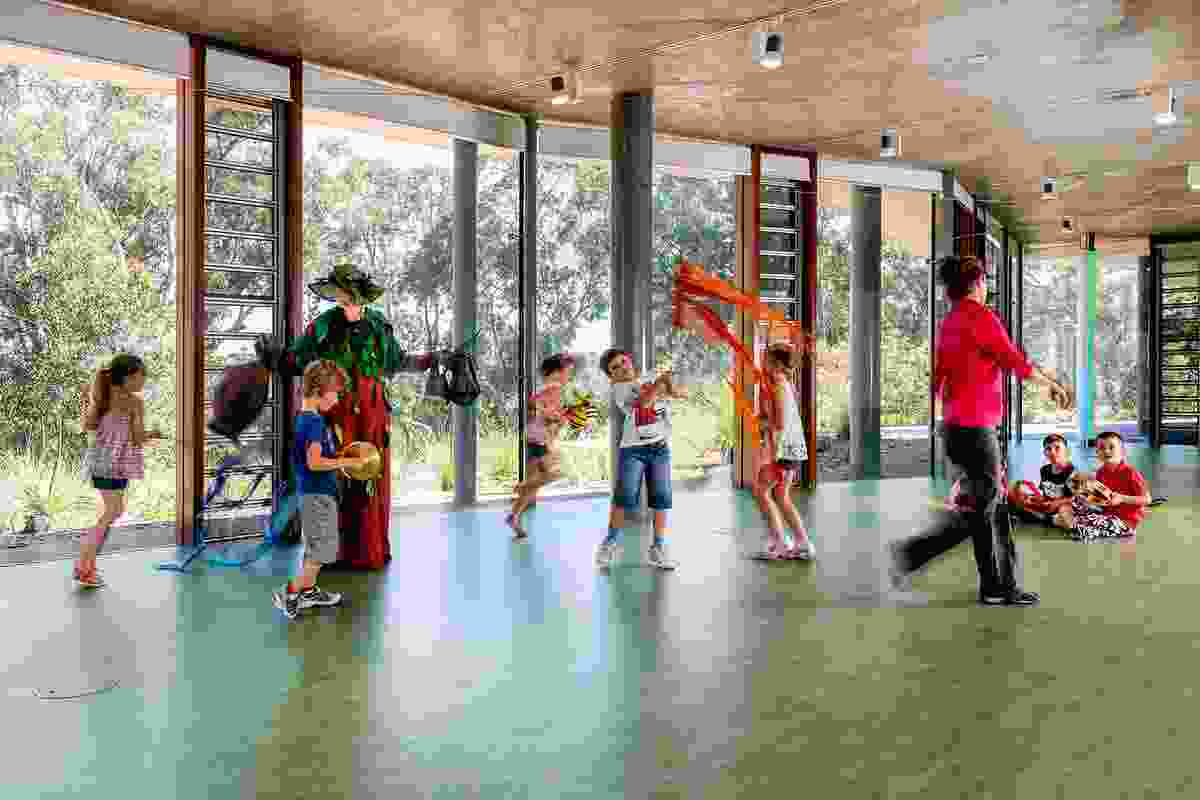 The centre has been popular with schools since opening. 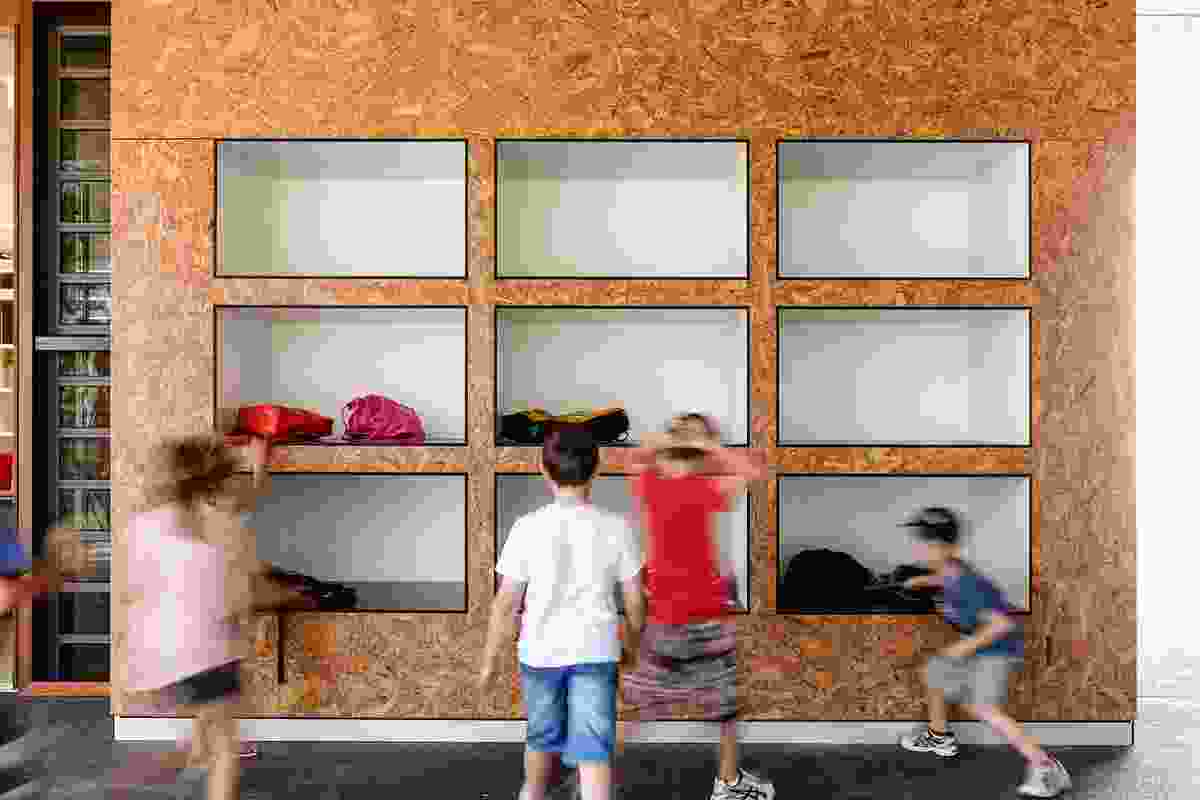 Sustainable oriented strand board is used throughout. 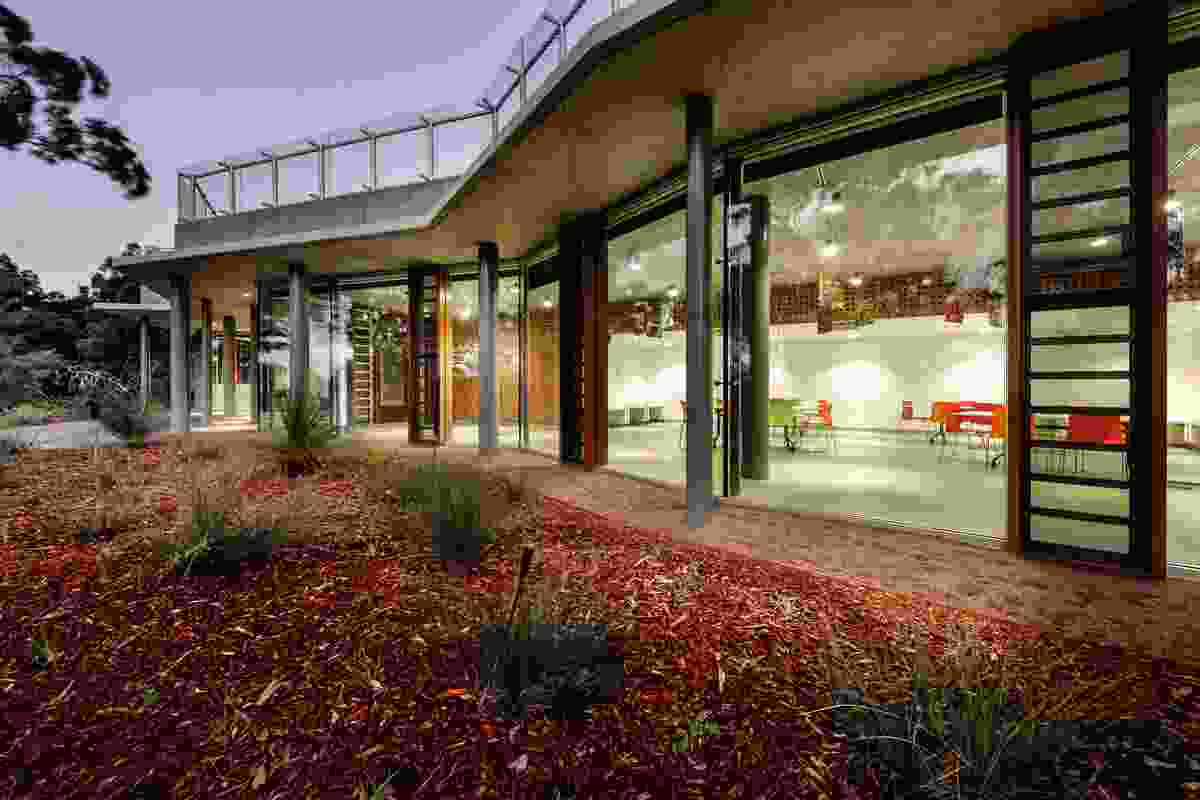 Above the open classroom, plants will soon overhang the roof. 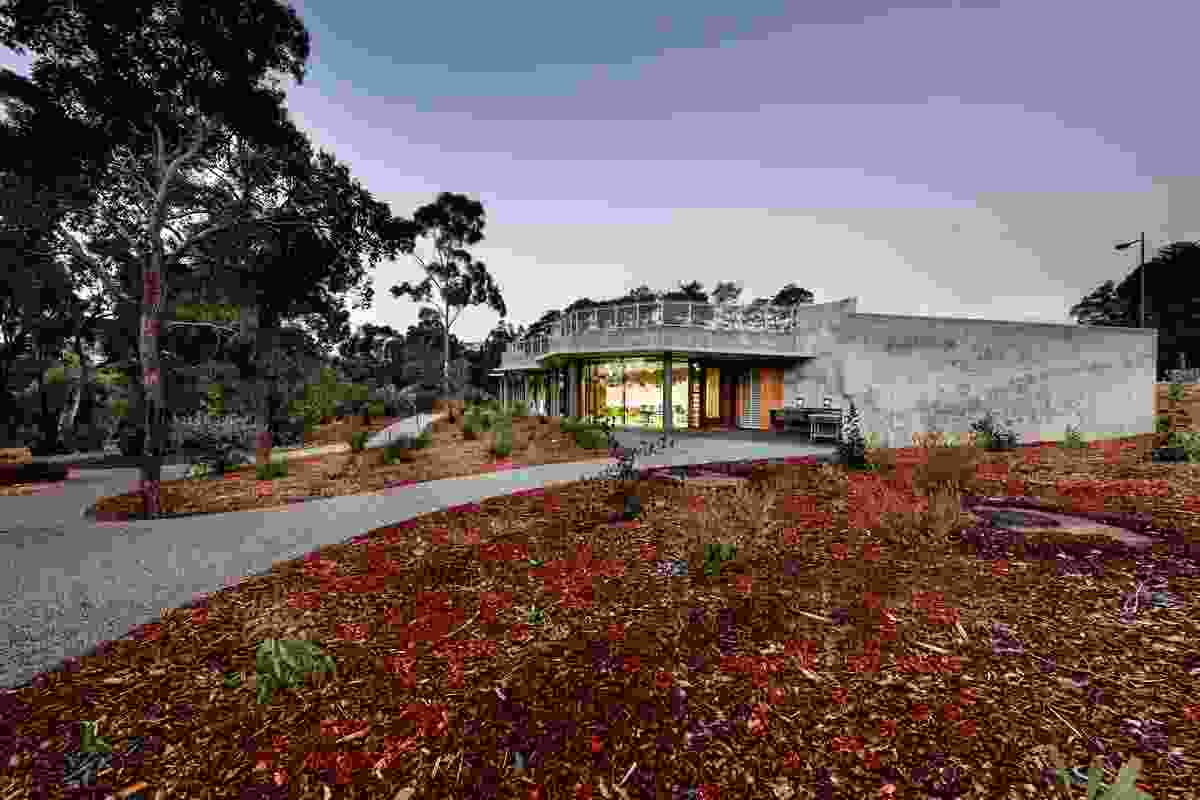 The path network of Kings Park extend through the building. 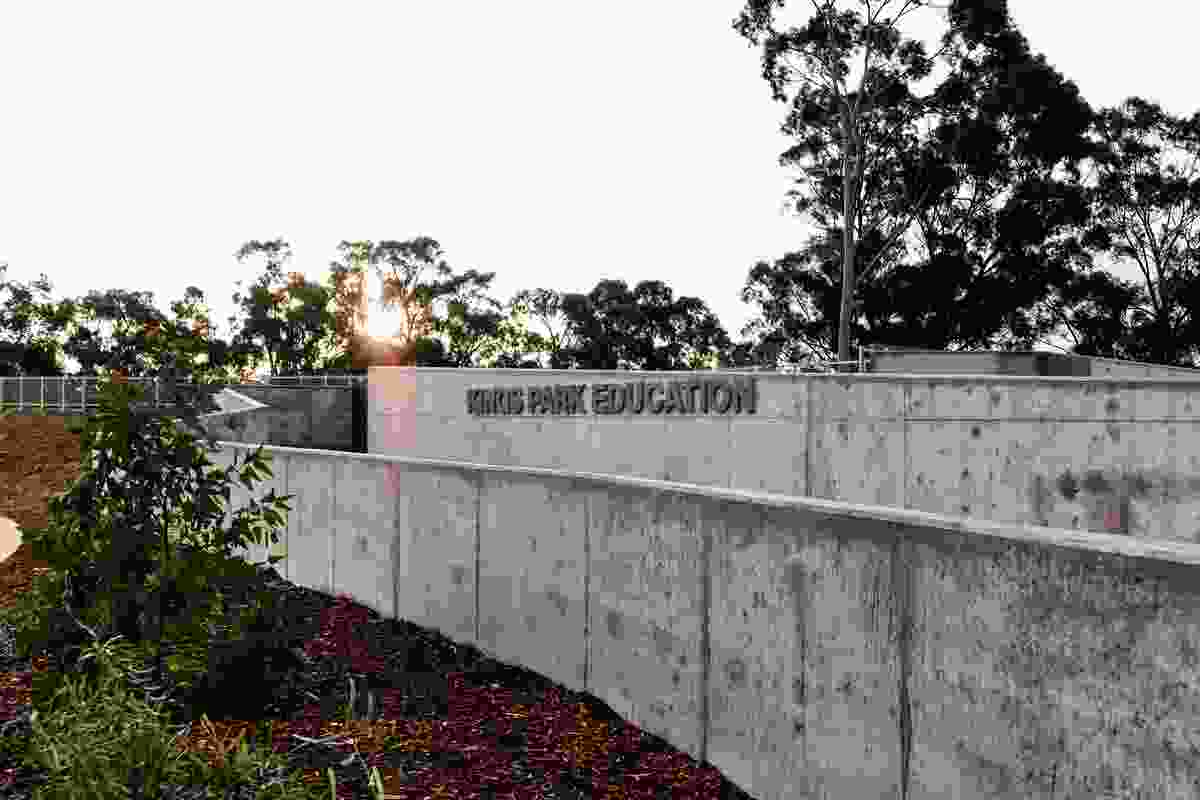 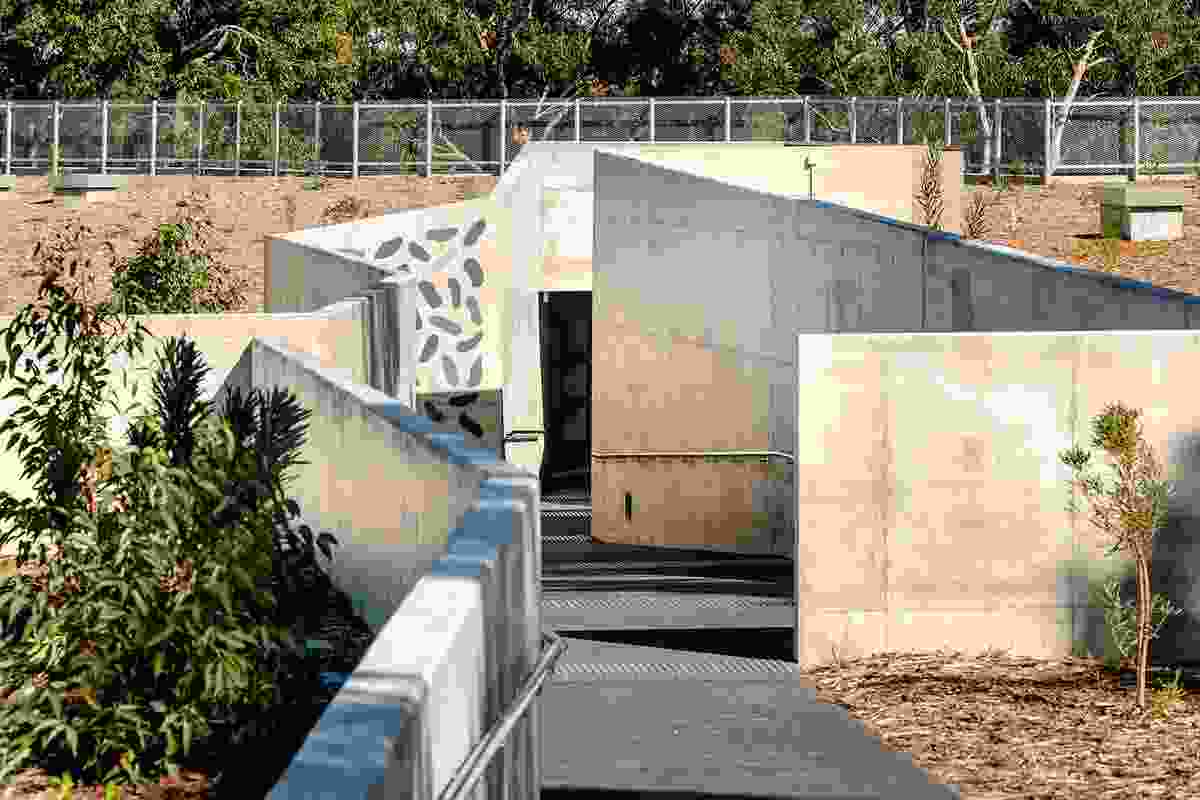 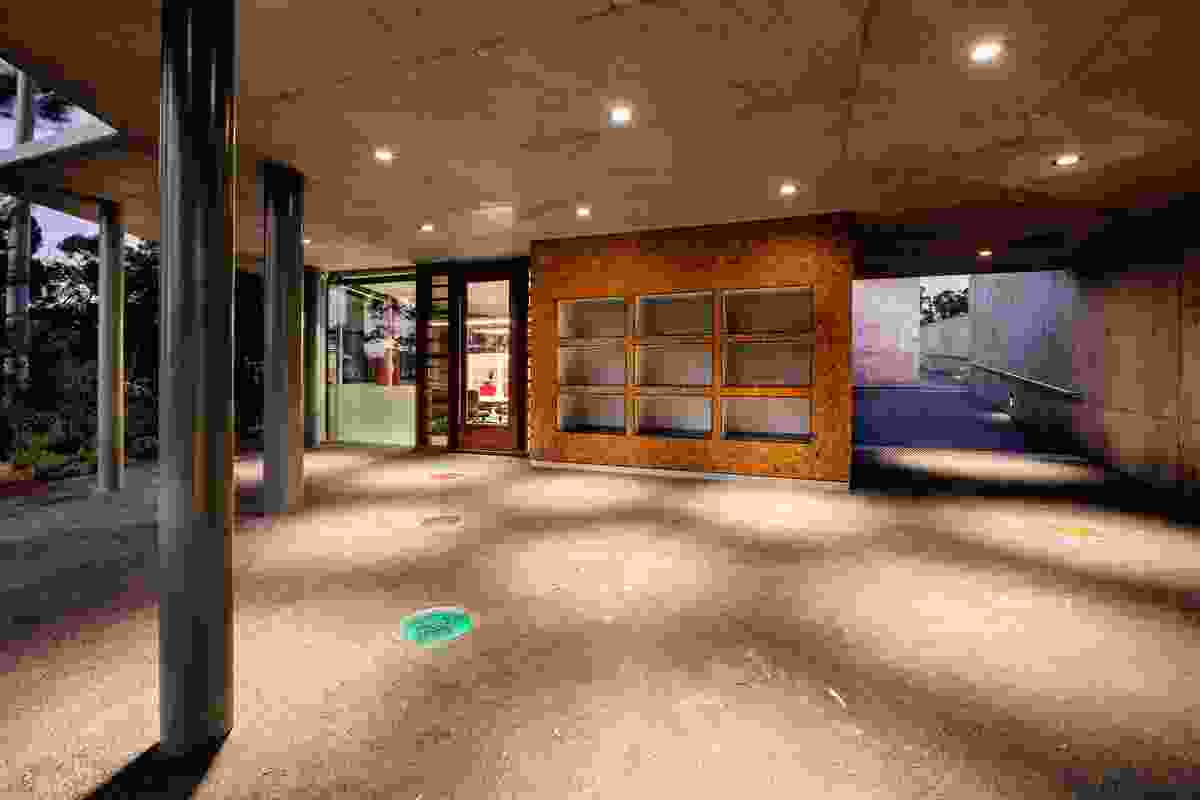 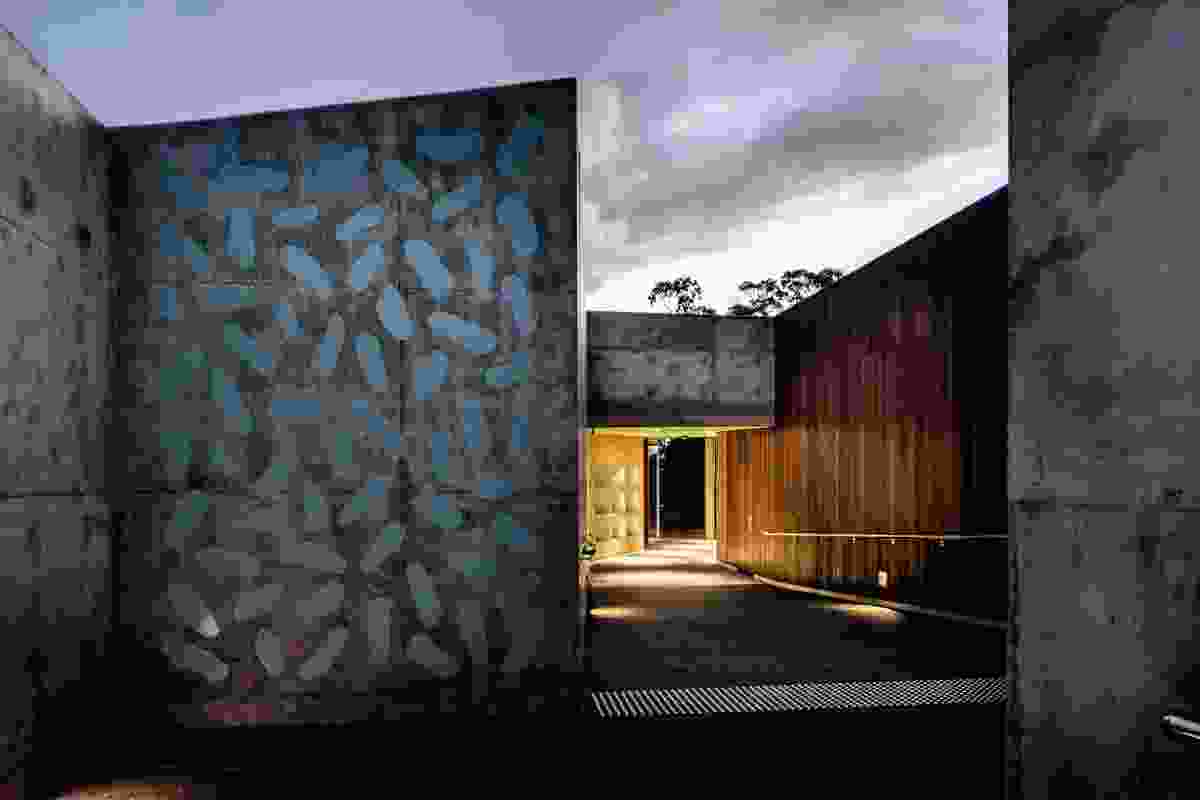 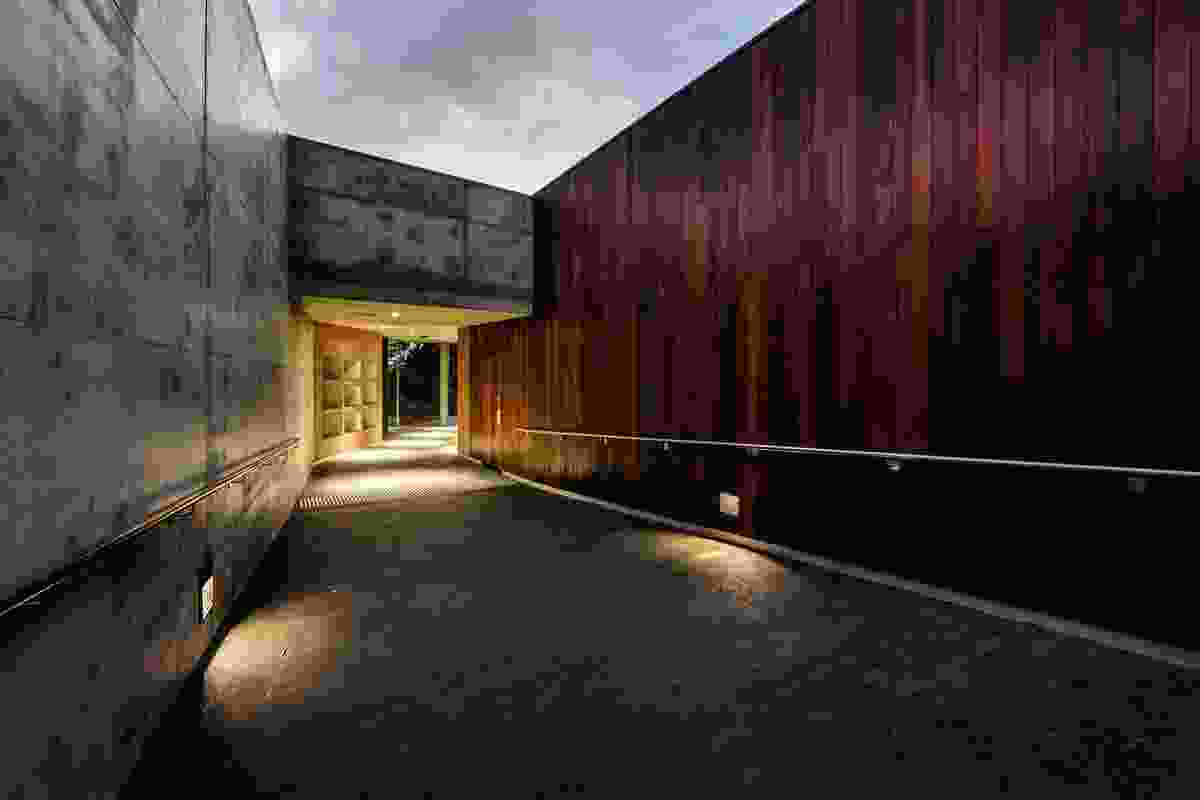 The entry at night.