For love of whimsy: Kooroomba Chapel

Through inventive tectonics, Wilson Architects has overlaid a picturesque landscape experience with allusions to an earlier settler culture.

The Kooroomba Chapel adapts the traditional chapel form and orchestrates a carefully calibrated balance between architecture and landscape.

An architect’s stance is conditioned by personal preoccupations, as well as those of the cultural, regulatory and disciplinary settings in which the architect works. The architect for this project, Hamilton Wilson, has a whimsical streak – nurtured first in his undergraduate years through painting, drawing and theatre productions with friends, and in later life alongside his late mother, the renowned Brisbane landscape architect Beth Wilson, in a scholarship of garden design that has resulted in a deep understanding of the gardenesque tradition predominant in Brisbane’s suburban landscape.

The Kooroomba Chapel adopts a traditional chapel form for its remarkable setting. However, through careful siting, landscape design and tectonics, Wilson alludes to moods – in particular, the eighteenth-century traditions of the Pastoral, the Picturesque and the Sublime – and ideas that have long been of interest to him. Consequently, this project sits apart from the preoccupations of current Australian practice in its concern for how, in the twenty-first century, buildings and landscape can together trigger visceral responses and associations that themselves have a long history in architecture and landscape.

Kooroomba Estate is a vineyard and lavender farm in the Fassifern Valley, west of Brisbane. The estate was formerly part of the Bell family’s extensive and historic land holding. Architect Guilford Bell’s early childhood home Kooroomba was on this holding and he spent many hours playing in his grandmother’s celebrated homestead, Coochin Coochin, nearby.1 The chapel commission follows Wilson Architects’ earlier site planning and design for Kooroomba Estate’s cellar door, restaurant and shop. The estate is nestled against the escarpment of Main Range, part of the Great Dividing Range and the Queensland portion of the World Heritage-listed Gondwana Rainforests. Air masses rising against these ancient escarpments generate local weather; the consequent variations in light and atmospheric pressure dramatically alter the appearance and character of Main Range. Against this foreboding backdrop, Wilson orchestrates a picturesque landscape experience to please even the fussiest of brides.

While the chapel’s belfry and gable roof are momentarily visible from the highway, it is only fully encountered after passing through the existing restaurant complex. When it reappears across fields of lavender and against the backdrop of Main Range, it is a surprise. The tiny building, presenting two facades obliquely in the classical manner, is formed from unlined timber frames supporting rampant hoya vines and is half buried in heaving beds of purple salvias. To the knowing eye, the carefully constructed scene suggests romantic notions of a ruin in the landscape or a bower in a garden. The profusion of this pastoral setting and its picturesque layering of space against the background of Main Range will only be further enhanced when the circle of trees enclosing the lavender field mature.

The chapel’s exact location and orientation in the centre of a natural bowl were fixed by the architect and builder onsite, to focus attention from within on Mount Moon, one of a series of remnant volcanic plugs isolated from Main Range itself. The unlined frame means the escarpment towering above lavender fields and farmland provides the real setting for vows. There is a strong sense of the sublime – think Peter Weir’s Picnic at Hanging Rock, although Wilson is inclined towards Westworld.

Wilson intended the wedding chapel to evoke memories of archetypal bush chapels. It certainly is suggestive of the many disintegrating timber structures that dot the surrounding rural landscape, reminders of the expansion and contraction of settlement. But it also recalls more knowing uses of the timber frame – Richard Gailey’s nineteenth- century single-skin timber schools and churches, and Robin Dods’s All Saints Memorial Church (1915) at nearby Tamrookum come to mind. Another architect from this region, Russell Hall, who grew up in the Fassifern Valley, traces his own use of the single-skin frame to the simple farm buildings of his childhood.

Wilson’s particular take on this idiom comprises a series of steel portals isolated from the floor structure to reduce the impact of differential movement caused by the black soil conditions. Panels of rough-sawn and unseasoned timber stud and trellis framework fix to the portals; the ceiling alone is lined with ply. Unfortunately, the addition of steel plates at the apex of the portals, which intrude through the lining, has affected the clarity of the idea. The chapel nave, altar and leaded windows are suggested through the articulation of studs and noggings. Over the structure trails the sweet-smelling hoya vines. Wilson’s skill for the easy and apparently simple inclusion of pleasures is evident everywhere.

The twenty-first-century bridal party caught up in the theatre of their special event may not be conscious of the intended associations of this design, or their poignancy – they may not want to reflect on romantic notions usually associated with ruins in a picturesque landscape, such as transience, death and decay. Like Peter Carey’s 1988 novel Oscar and Lucinda, the Kooroomba Chapel replays romantic and classical themes against an Australian setting.2 In Carey’s novel, a glass chapel becomes emblematic of an impossible love and the stakes in a daring wager, won not by the gamblers but by nature.

Unlike Carey’s chapel, Kooroomba Chapel is not defeated by nature. Rather, building and landscape are in a carefully calibrated balance. Today’s bridal party will be touched by an idyllic stage set removed from the tensions of the real world.

2. Incidentally, nearby Bellingen – the scene of Oscar’s and the glass chapel’s final demise – is adjacent to the New England portion of the Gondwana Rainforests.

For love of whimsy: Kooroomba Chapel 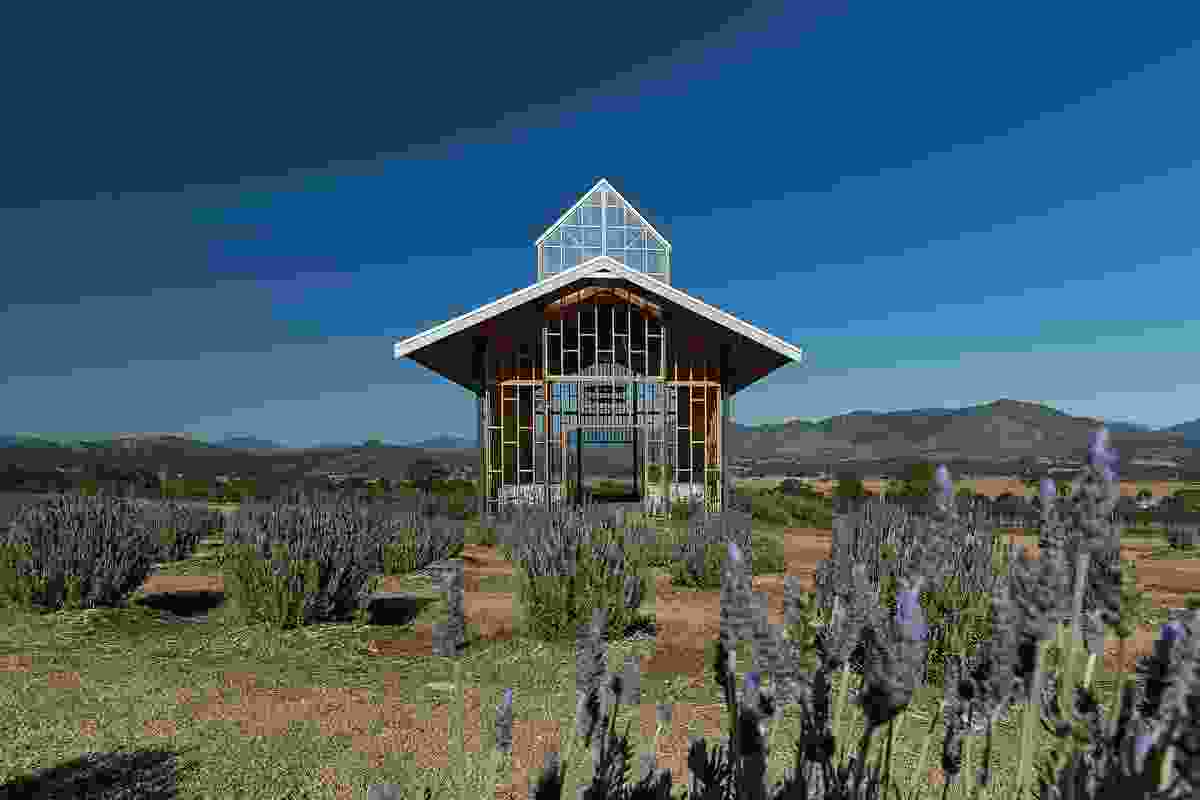 The Kooroomba Chapel adapts the traditional chapel form and orchestrates a carefully calibrated balance between architecture and landscape. 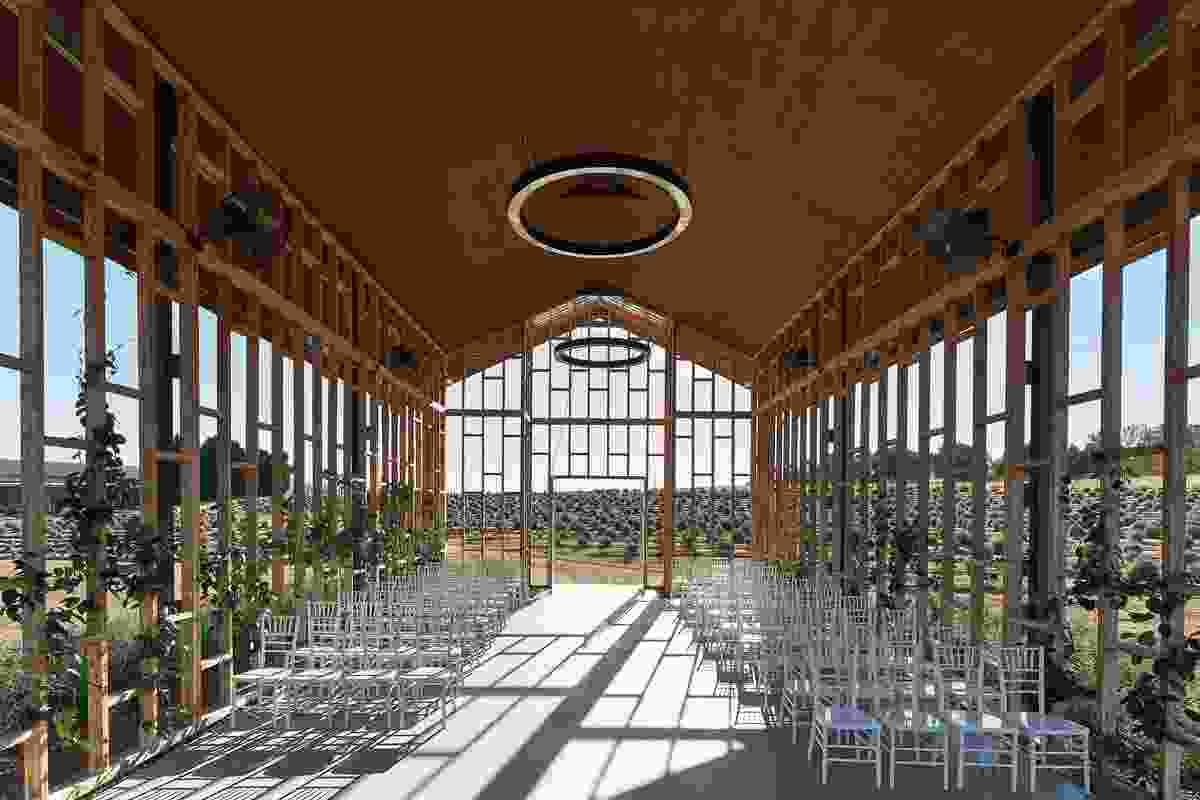 Steel portals support a rough-sawn and unseasoned timber stud and trellis framework. The ceiling is lined with ply. 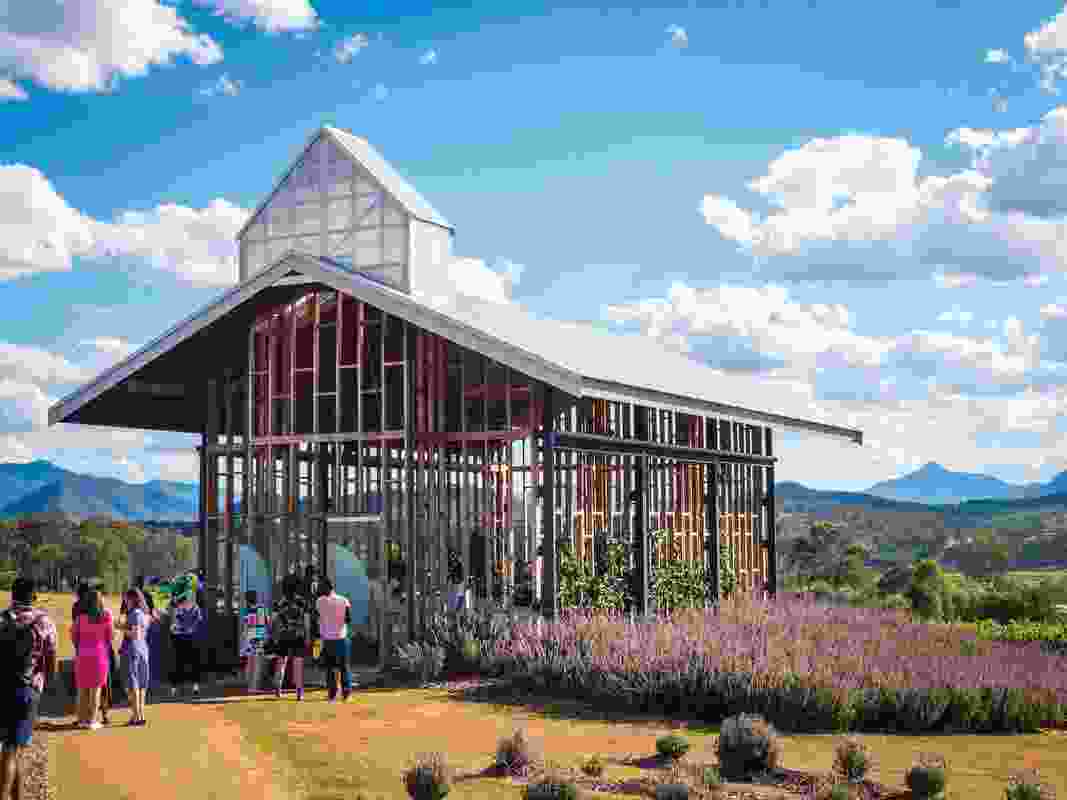 The cultivated idyll of vines creeping up the structure provides a dramatic stage for weddings and events. 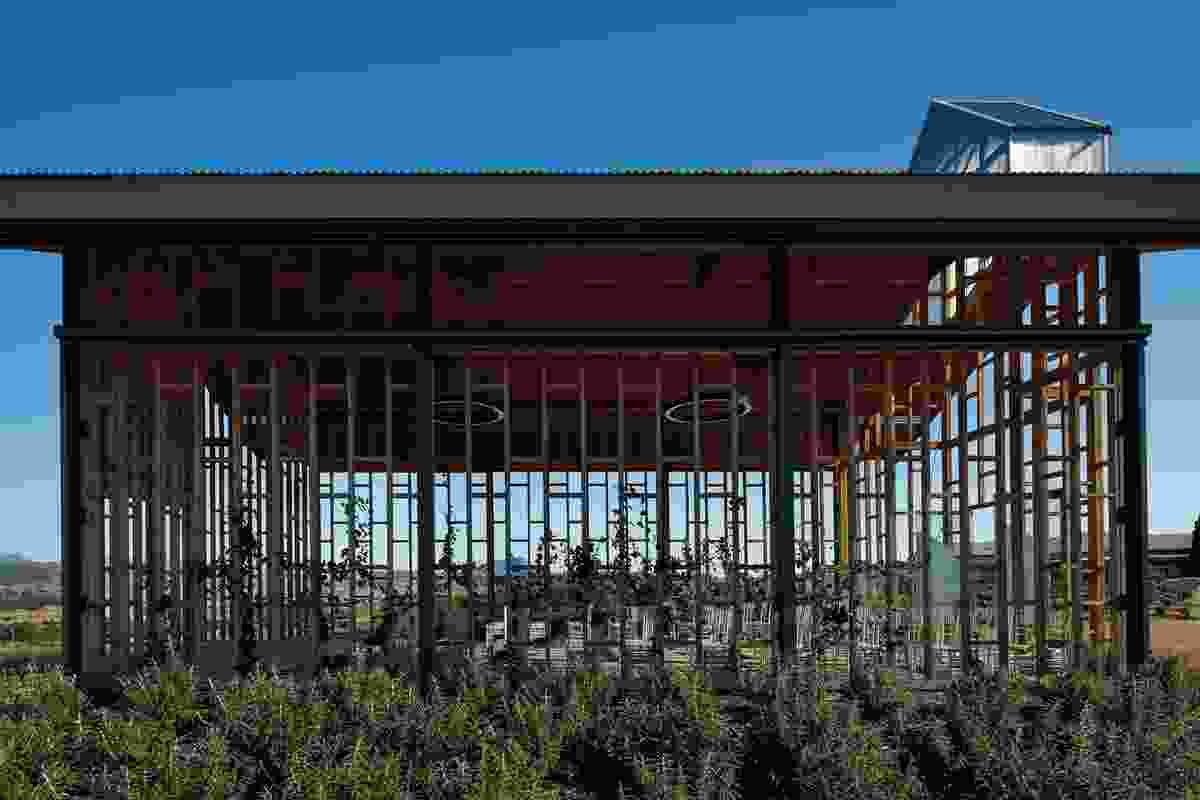 The project alludes to eighteenth-century traditions of landscape design, in particular the ruin in a picturesque landscape. 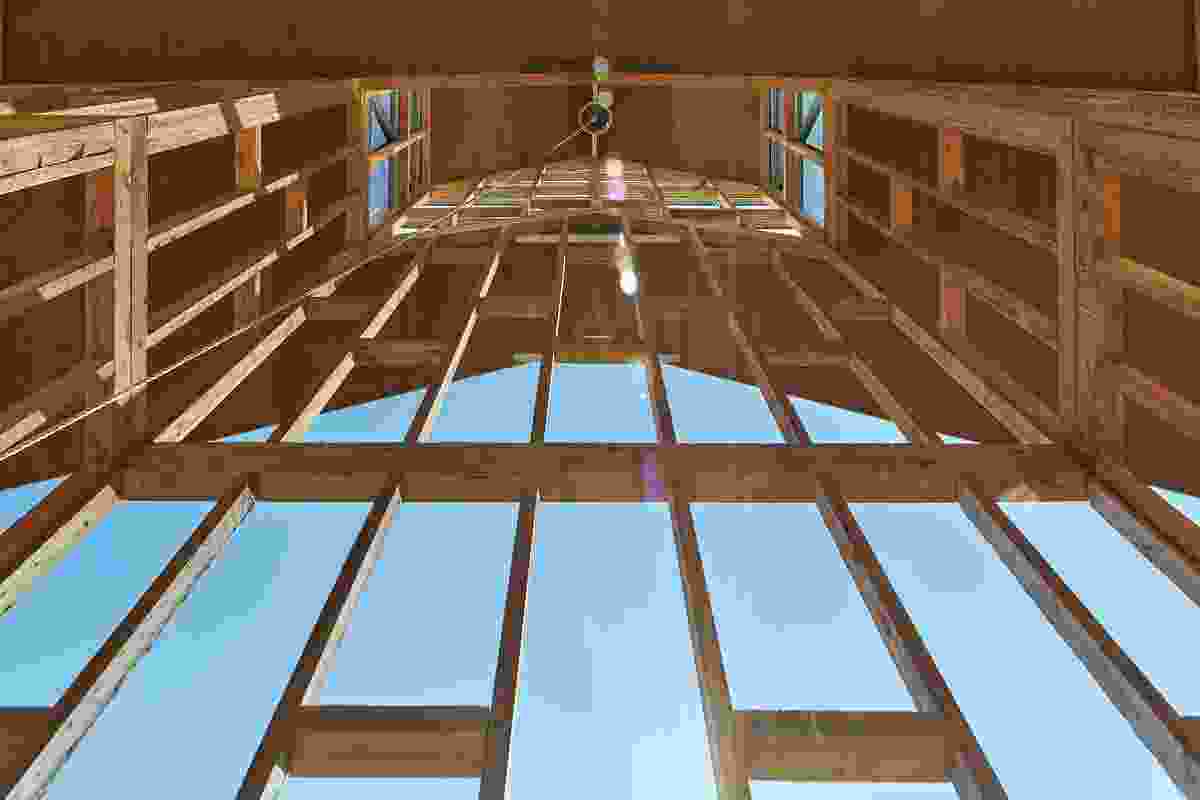 Although the chapel is non-denominational, it features archetypal church forms such as the belfry, nave and altar. 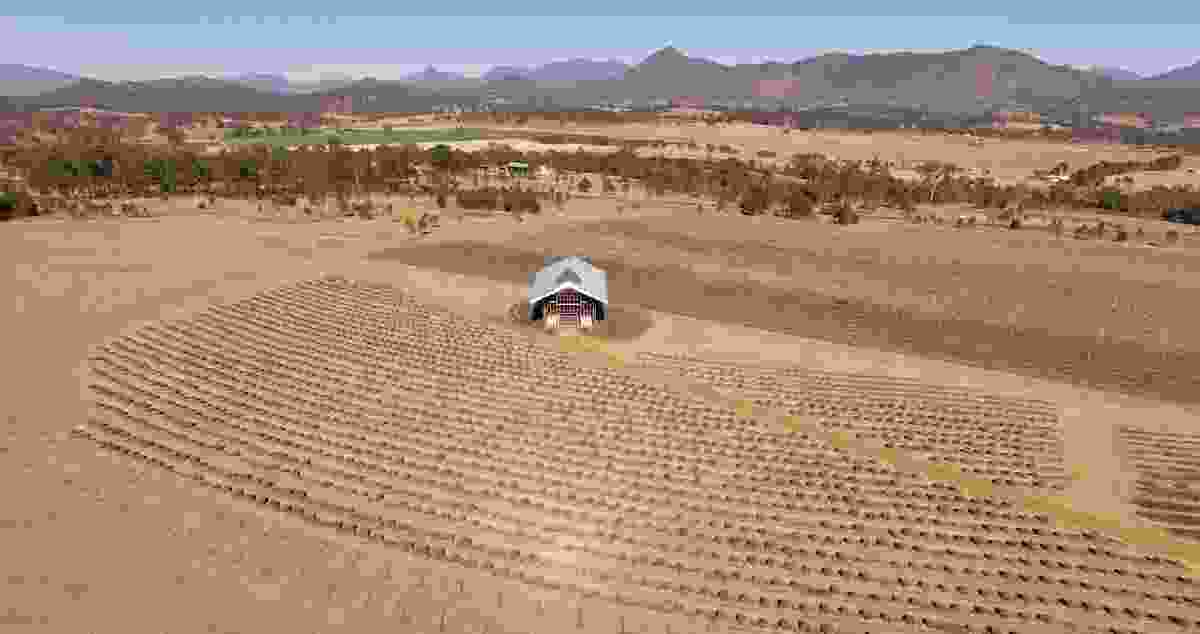 Located on a vineyard and lavender farm in Queensland’s Fassifern Valley, the chapel is set against the foreboding backdrop of Main Range and the Gondwana Rainforests. 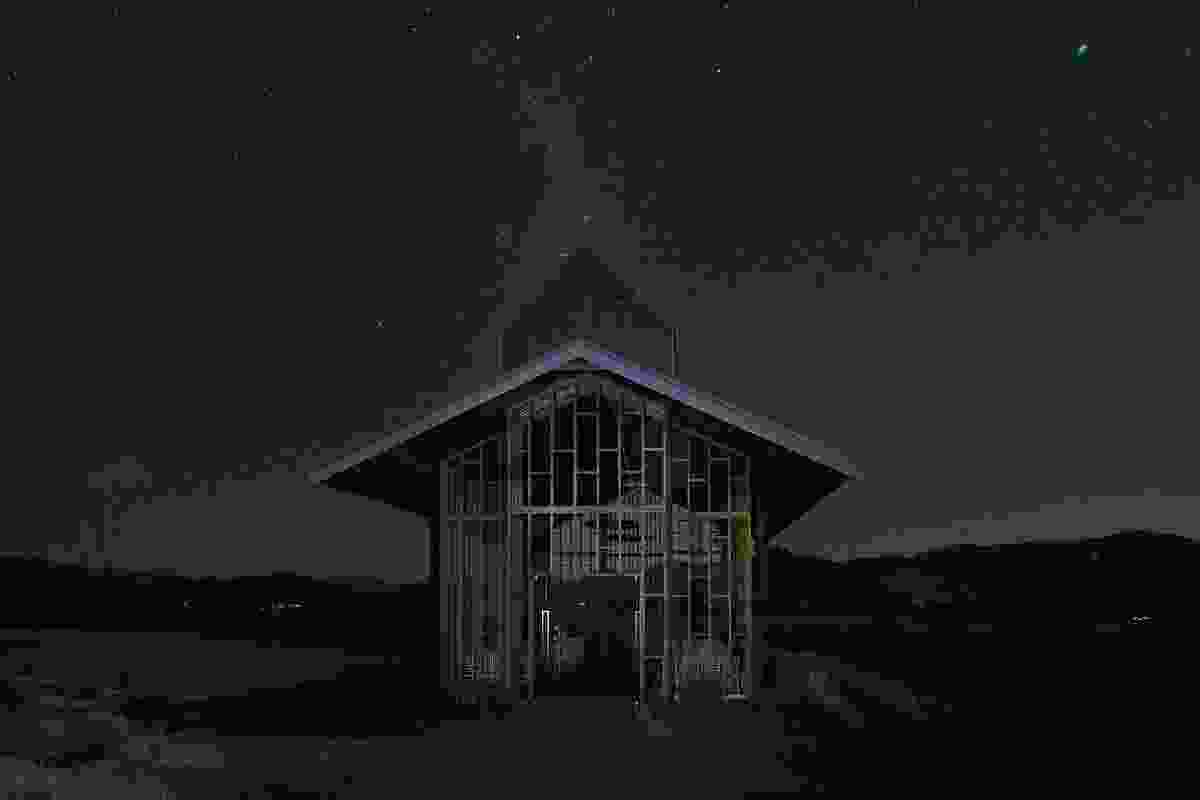 Kooroomba Chapel by Wilson Architects against the starry night.